Lawson discusses her path to success, keeping project costs down, and what it’s like to be the only woman in steel-toe boots. 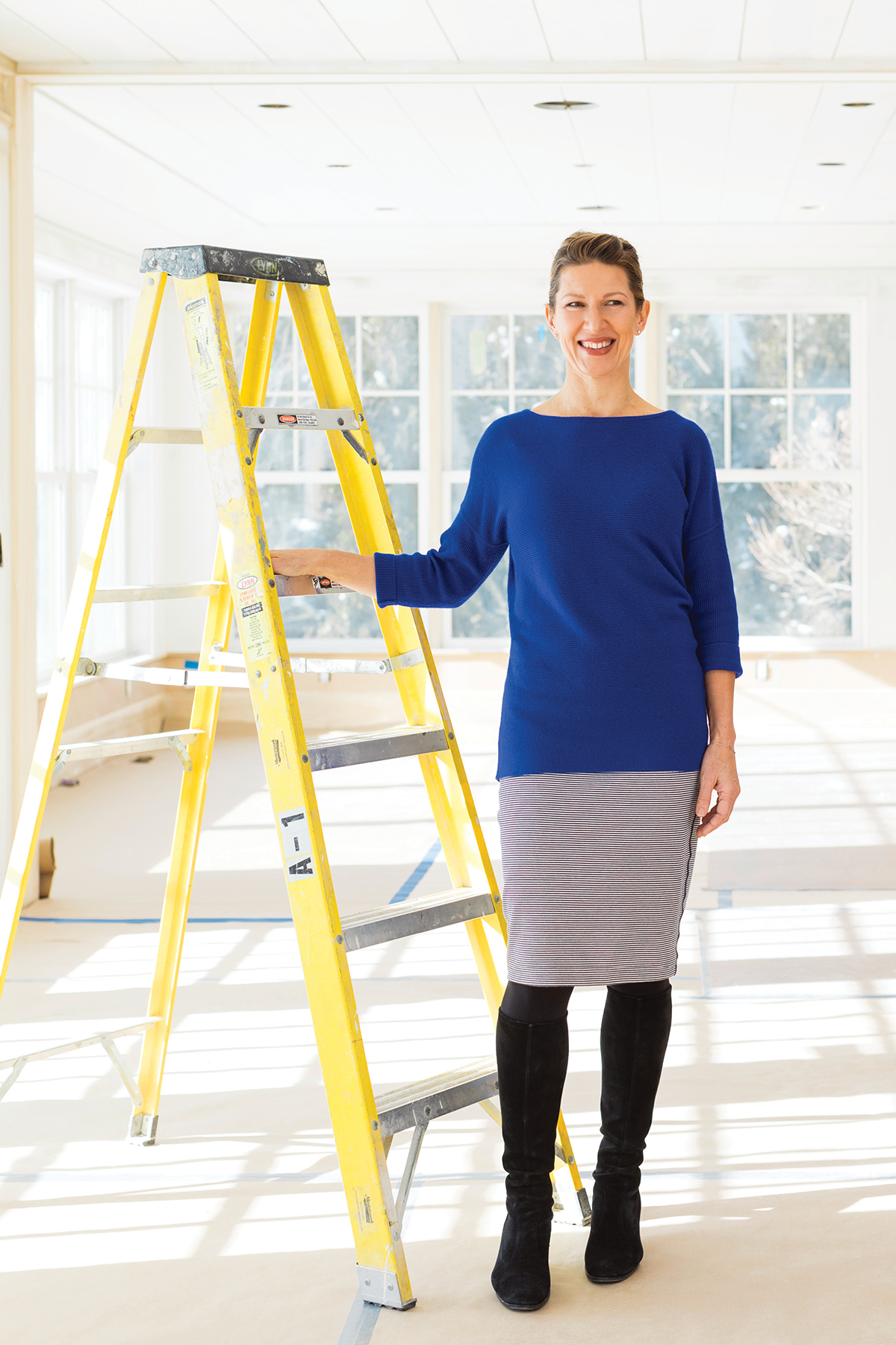 Photograph by Joyelle West, hair and makeup by Paula Voisembert/Team

So how does a former Fulbright scholar get into construction?

I was raised in Lincoln, and my father built the house where I grew up while he was working full time at MIT. When we moved in, there was no electrical, no plumbing, no stairs, no interior, nothing. And there was an outhouse. We had one power cord into the house off the pole for a power source.

So your childhood home was built around you?

That’s right. The builders constructed the shell and then handed it over to my dad before the chimney was done. He built it at night, one step ahead of the building inspector—those Deck House chimneys are huge. After that, we moved in and we had no heat, but we were climbing all over the framing and drawing on the slab. You know, it was like kid heaven. We had three girls in the family, and my father apparently wasn’t clear on the concept because he’d always give us power tools, sports equipment, stuff like that.

You explored other careers first?

I had a career in tech but I had always wanted to be a builder, and when I had the experience of general-contracting my own house, it just pushed me over the edge. I had been working on houses for such a long time that I just thought I needed to do it. So I decided 15 years ago to switch careers. It was a bit of a leap because I had little kids.

What led you to S+H?

After that, I started my own small construction company. I did some development in Arlington and Cambridge, but I stopped in 2007 because I saw what was happening in the banking industry. They were giving me a loan without even meeting me, let alone looking at my financials. I knew I was responsible, but they sure didn’t, and you could just tell that it was time to go. So that’s why I went over to S+H.

And then you worked your way up.

I was a project manager for about seven years, and then we had a job that didn’t go well and we had to give back a lot of money. I went to the owners of S+H and I said, “I can’t live like this—working only on paper. I need to modernize our systems. Please, can I stop being a project manager for six months and do the analysis, survey the market, and all that stuff?” Of course, that was back when I thought you could do that in six months—which, note to self, you can’t. But I did get pretty far.

After I got into the operations stuff—which is really just how to make the company better, how to make it stronger, how to make it function more smoothly and transparently—it naturally rolls into wanting to continue doing that in a leadership role. [Previous owners Doug Hanna and Alex Silve] were in their early sixties, and I suspected succession was a topic they were thinking about. And so I went to them and proposed a buyout. They were happy.

A typical project can be anything from a bathroom up to many millions of dollars for a brand-new house. We’re doing both of those things right now. But in terms of new projects, we don’t really have a lower level that we say is our minimum. If you’re an existing customer of ours, we’ll fix your doorknob.

What are the big challenges contractors face these days?

I think that hiring is absolutely one. One of the cornerstones of S+H is the quality of the work that we do. We’ve got these more senior guys who are very skilled craftsmen—you see the beautiful things we can build. So we have to keep that level of quality going in the company, but our guys are getting older. And people don’t want to go into the trades as much. So if you can’t hire highly skilled craftsmen, then you’ve got to hire them younger and train them. You can’t just leave it to fate.

At what point in the process should a homeowner contact a contractor?

I think that’s the first call you should make. Building is an iterative process with design and an architect, but you don’t want your architect to go too far with something that’s out of your budget. So when we get involved early, even before people have bought something, we talk in general terms: How much would it cost to do this or that? These conversations help get people focused.

Have you noticed changes in how homeowners are thinking about construction?

People value the housing stock that’s here in Boston, which is really beautiful in many cases, and they’re working with what they have. There’s very little new construction except for additions. There’s a lot of attention to bringing things back in terms of the beautiful craftsmanship that’s in there already, and doing additions that stay with that original design and level of craftsmanship.

That said, we’re not afraid of modern finishes and amenities. There’s a designer from Minneapolis here for one of our jobs and she’s doing work for a guy who has houses all around the country, and she was really surprised to learn that we put modern kitchens in traditional houses. And we do modern bathrooms and kitchens all the time; that’s very common. I would say it’s almost more common than putting a traditional kitchen in a traditional house.

Is it easier if a builder has worked with an architect before?

Oh yeah, it’s the best of the best. It’s hard to do a quality custom project on budget or on schedule with pressures of time and money. If you can reduce the number of people in that circle that you don’t know, it’s a great thing.

We’ve all heard contractor horror stories. How do homeowners know which builder is right for them?

You should start by looking at the quality that you see on a builder’s website. How much attention to detail does their work reveal? What caliber of projects do they do? That’s just to get you oriented. Then you do need to speak to their references. If you’re in discussions with an architect, that opinion is very important, too.

Things like Best of Boston are also very important. You aren’t going to find a bad construction company that’s won that award in recent years. There are differences, but it gets you above a certain level.

How can a budget spin out of control?

So there are big-ticket items that have not been established, and if you’re working with a high-quality builder, they’ll give you their honest opinion of what this project is going to cost based on your level of finishes. That said, we lose jobs because we go in and we say that, and people aren’t ready for the number.

Another way to protect against surprises is to find out how the builder tracks changed orders and costs. A carefully monitored process forces difficult conversations at times when they’re still actionable.

Also, don’t change your mind. That costs you money.

What kinds of projects make you the happiest?

My favorite kind of project is one in which we realize a home’s potential. Maybe it’s a family that’s living in a house that has design problems—they’ve got plenty of space, but it’s not working. Or there’s a gorgeous view, but there are no windows on that side.

When you work with a good designer or architect, you unleash the amazing beauty, flow, and good feeling in the house. It’s almost like you’re removing the obstructions to it. When that’s done, you see how much houses make people’s lives better. I mean people are literally happier because they’re sitting there in their breakfast nook and the sun’s shining in. You feel like you’re liberating the house and you’re liberating the family. And you’re making things more beautiful for everybody. It feels so good.

You’re doing a lot of unleashing?

You’re a woman in a predominantly male field. How is that working out?

At the beginning, 15 years ago, I think people were really, really surprised. I remember how some of the subcontractors were kind of shocked. They were like, really? And I’d say, “Hi, I’m Sarah. I’m the builder,” and even my saying it to them directly wasn’t enough for them to believe it.

I remember one guy—whose company actually ended up being great subs for me over the years—and when I introduced myself, his jaw dropped, and he said, Really? He just didn’t believe it. But that was fairly uncommon.

I have people who remember me years later because I’m the only female builder they’ve ever met, but now that I’ve been doing this for a while, the relationships I have with subs and customers are based on the regular things that business relationships are built on—trust and competence and experience with each other.

I mean, every once in a while I’m in a meeting with people I don’t know, and I’m walking like a builder and talking like a builder, and they still think I’m the designer. I’ve got the steel-toe boots—look down! But I don’t begrudge them that, because statistically, the chances that I’m the builder are just incredibly small.

Other than that, I think it’s a wonderful place for women to work. I think people do respect you if you’re good at your job. Construction attracts a down-to-earth crowd, and if you clearly know what you’re doing, you add a little spice to it by not being the same as everyone else they’re working with, and I think they really appreciate that.