Interior designer Nikki Dalrymple of Acquire puts her most treasured pieces on display. 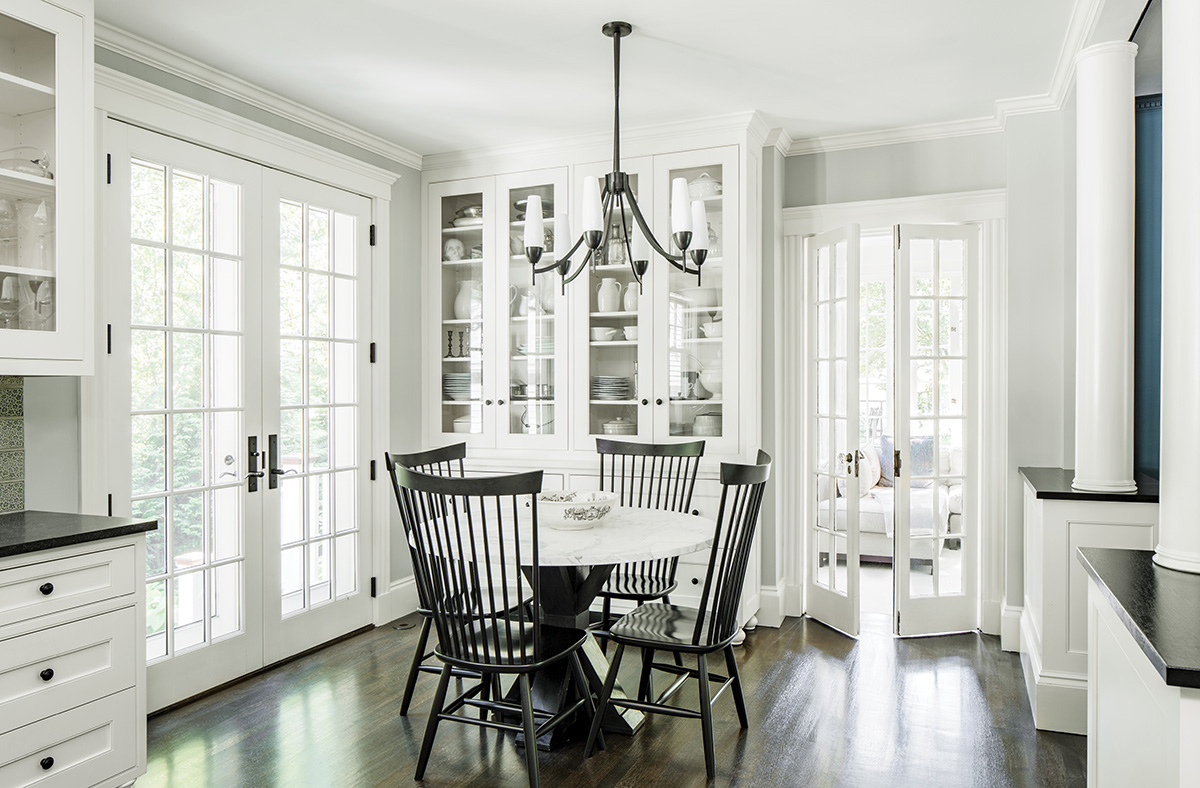 When interior designer Nikki Dalrymple and her husband moved from Charlestown to this Wellesley home three years ago, she gained not only the space to explore her aesthetic, but also carte blanche to let her imagination roam free. That said, it had taken a while for the couple to find a house—she wanted a place she could gut-rehab, but he wanted something turnkey. This 1906 house was a great compromise, she says. Its layout worked for how their family lived; it simply needed a “cosmetic facelift.”

Dalrymple was so clear in her design approach that just a week after she and her husband closed the deal, they began renovations—redoing the electrical work, painting and wallpapering, and re-staining the floors from “a horrible yellow-orange tone” to a deep, rich walnut color. They also removed many of the home’s built-in cabinets and bookshelves to create a feeling of openness. “I wanted each room to feel like anyone could walk into it at any time and relax, and feel like they were in their own home,” Dalrymple says.

Landscape Architecture
A Blade of Grass, The Narrow Lane

This approach, she says, was a reaction to the more-buttoned-up homes she grew up in, “where you had a formal parlor and living room, and no kids were allowed there except on special occasions.” As a consummate entertainer, Dalrymple wanted comfortable first-floor spaces where guests could spread out after dinner. Hence her choice, for example, to cover the barstools in the kitchen with an indoor/outdoor fabric: “You just know someone’s going to spill sometime, but you don’t want them to have to worry about it,” she says.

Focusing on the details was also important to her. She paid homage to the home’s history by juxtaposing turn-of-the-century flourishes—adding dentil moldings to the dining room, the living room, and the office—with such modern touches as the Omexco textured striped wallpaper in the dining room.

Like a museum curator, Dalrymple builds her interiors not around tables and chairs, but around acquired treasures—one-of-a-kind or rare pieces—mixing vintage with modern in a way that feels neither overly designed nor too precious. “I really have no formula,” she says. “It’s based on a feeling and what clients love. It comes about very organically and just sort of happens.” 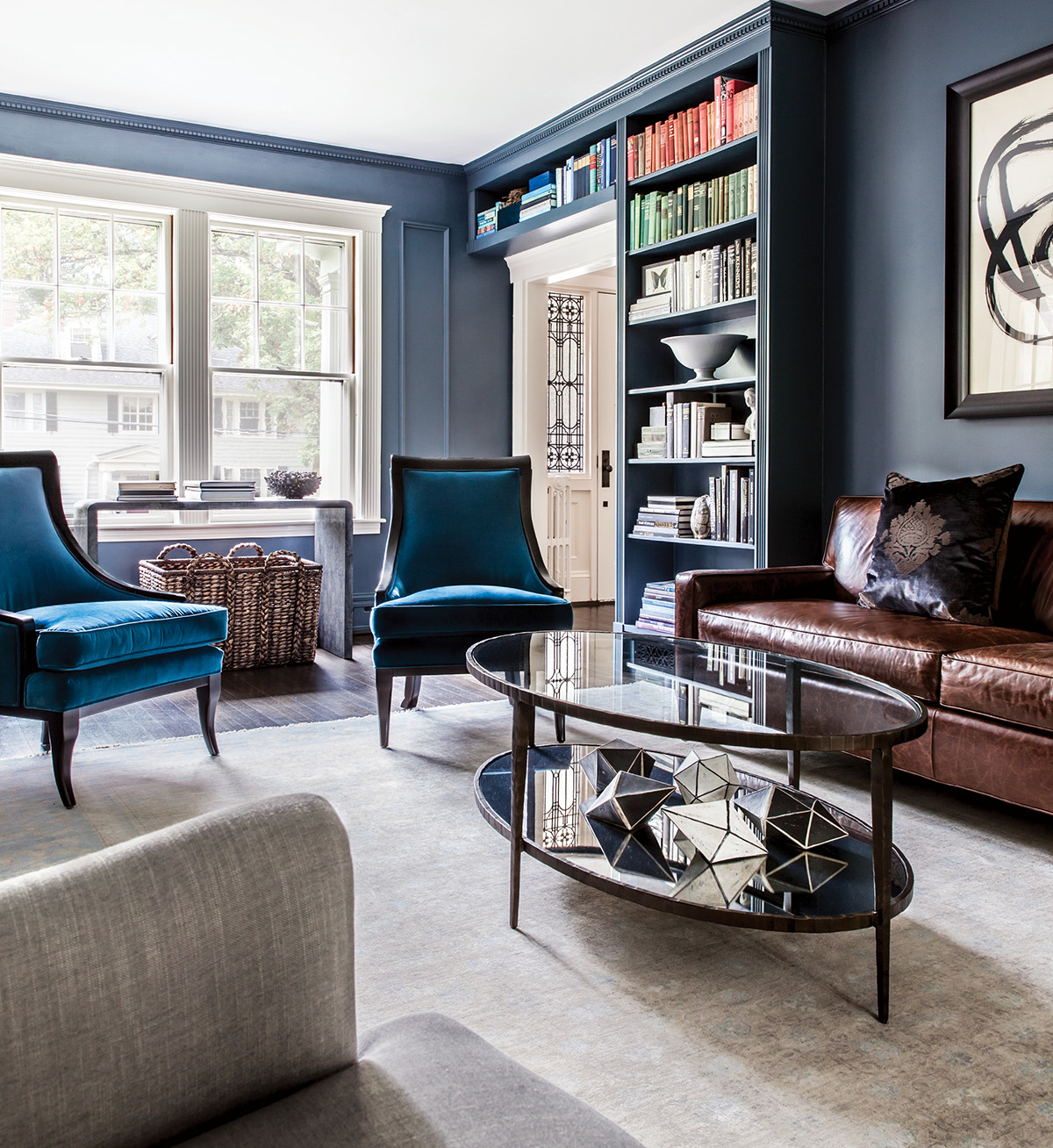 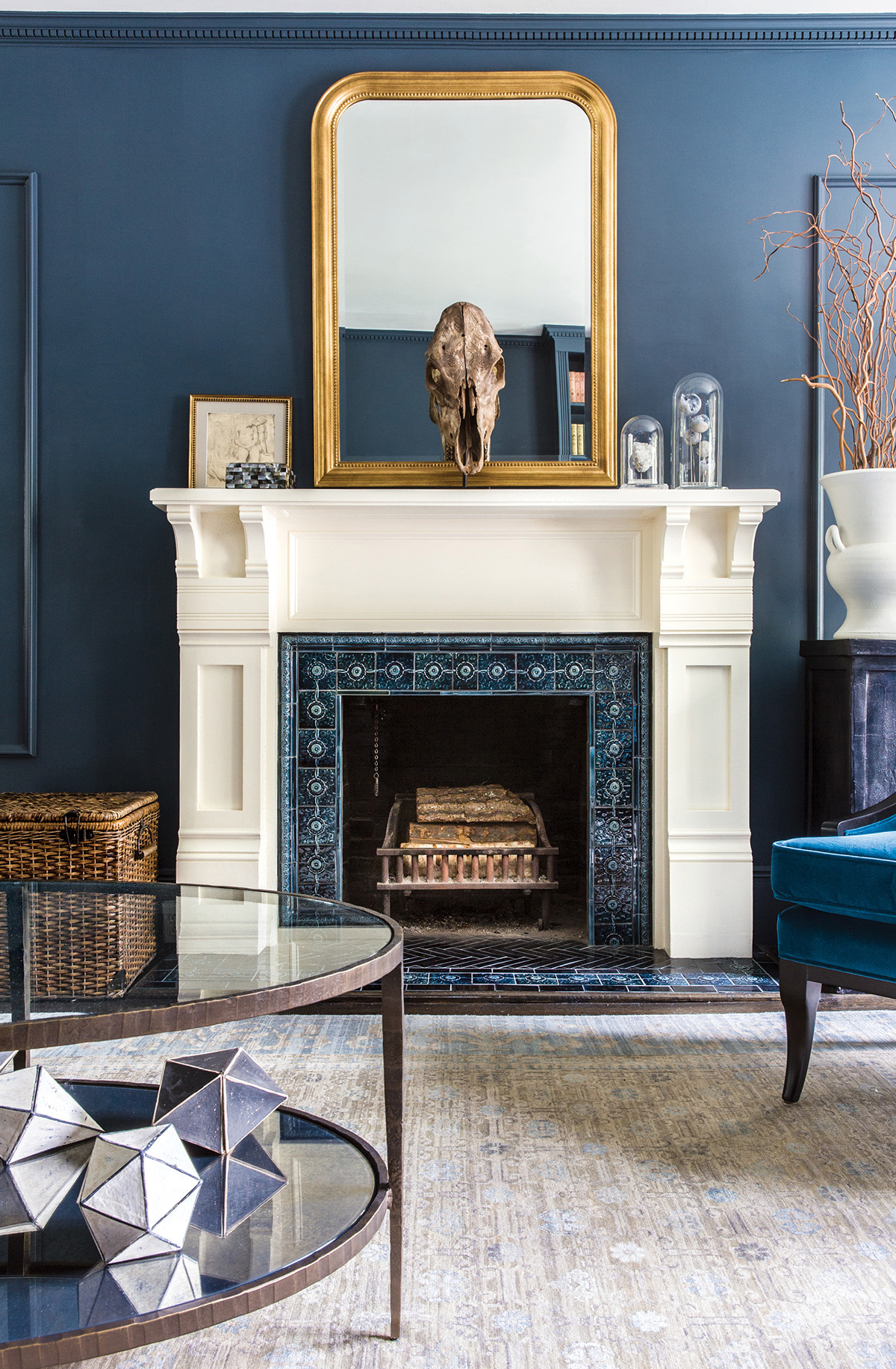 Dalrymple might describe her design approach as a process that “just sort of happens,” but make no mistake—that’s the product of years of training. Early in her career, Dalrymple was a documentary producer with HBO, National Geographic, and the Discovery Channel—all jobs that required a lot of set design. That may be why, as a designer, she works in tableaux. Think: a modern leather sofa offset by embossed burnout velvet pillows, a contemporary black-and-white painting above; or the bookshelves artfully arranged with old busts she found on her travels, butterfly specimens she picked up from a Parisian antiques dealer, boxes made of porcupine quills, and obsidian-hued sculptures that double as boxes. “I love natural history, so whenever I find tabletop things—whether it’s a bowl made out of quartzite, the cow skull I bought at an antique market, or just beautiful pieces of stone I can use as a paperweight—I grab them,” she says.

When Dalrymple stumbles upon a thought-provoking piece, she buys it, she says, “because I know it will be great for someone, at some time.” One example: a set of 19th-century prints she found years ago that she snapped up on the spot. “They’re of these guys in these little boxing outfits,” she explains. “I just loved them and bought them, and then I recently got a client with a teenage boy’s room that they’ll look amazing in.” 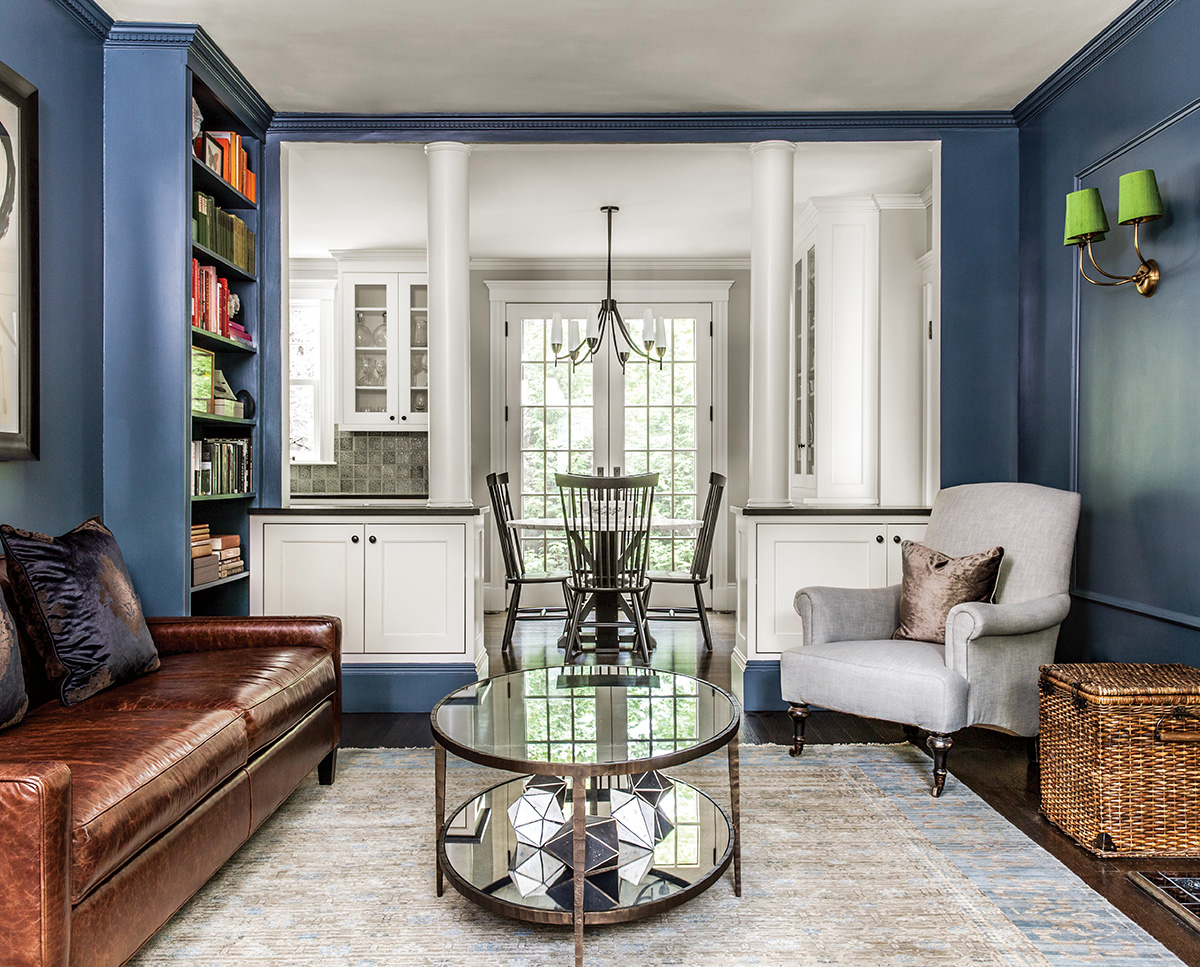 The living room opens up to the eat-in kitchen, framed by elegant columns and period-appropriate molding details. / Photograph by Sean Litchfield 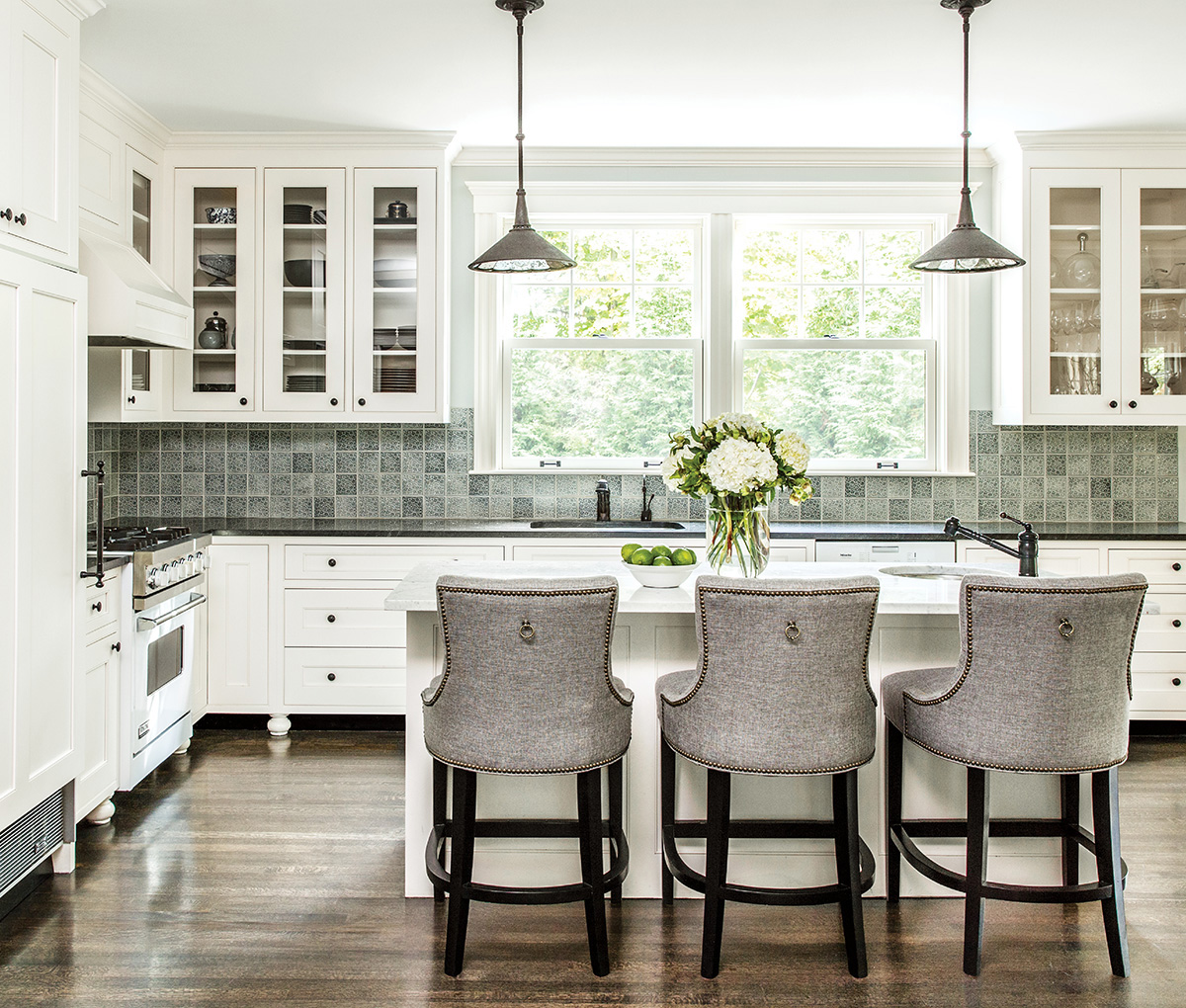 Dalrymple made a few cosmetic additions to the kitchen, including barstools covered with practical Nomi indoor/outdoor fabric and pendants by Currey & Co. / Photograph by Sean Litchfield 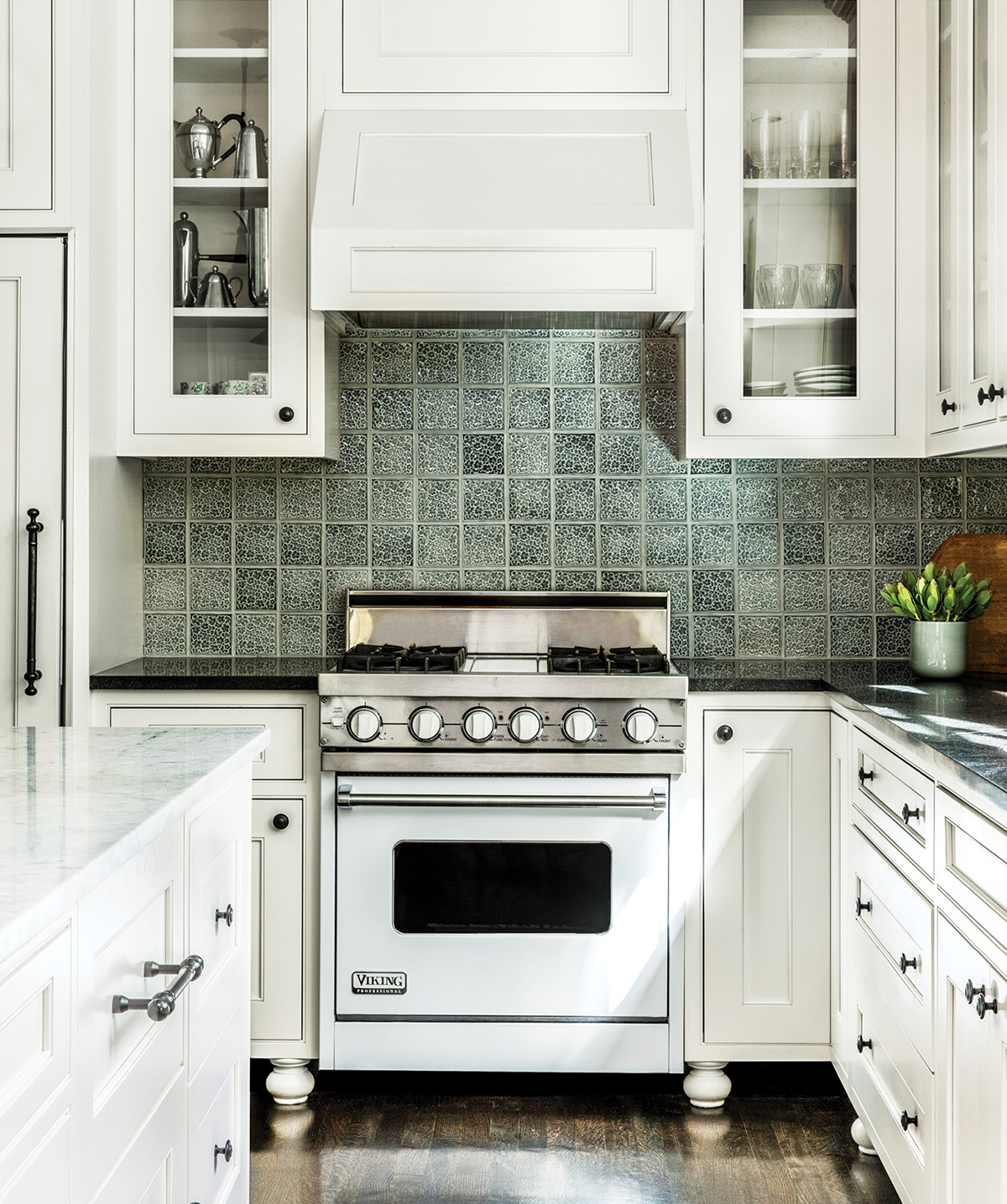 The backsplash is based on a tile a previous owner had found in the house. / Photograph by Sean Litchfield

Dalrymple sources her finds all over the globe—from Maine antiques dealers and New England flea markets to furniture shops abroad. She’ll even ship pieces home, regardless of size. “I’m a funny kind of collector,” she offers. “I’m not a hoarder; I don’t have piles of boxes or anything like that. For each piece, I think about its meaning, its history, and what’s unique about it.”

Whether in her daughter’s playroom (“I spend so much time in there myself, I wanted it to be comfy for both of us,” she says with a chuckle) or in her hands-down favorite space, the living room, she finds pleasure in being surrounded by the people—and things—she loves. 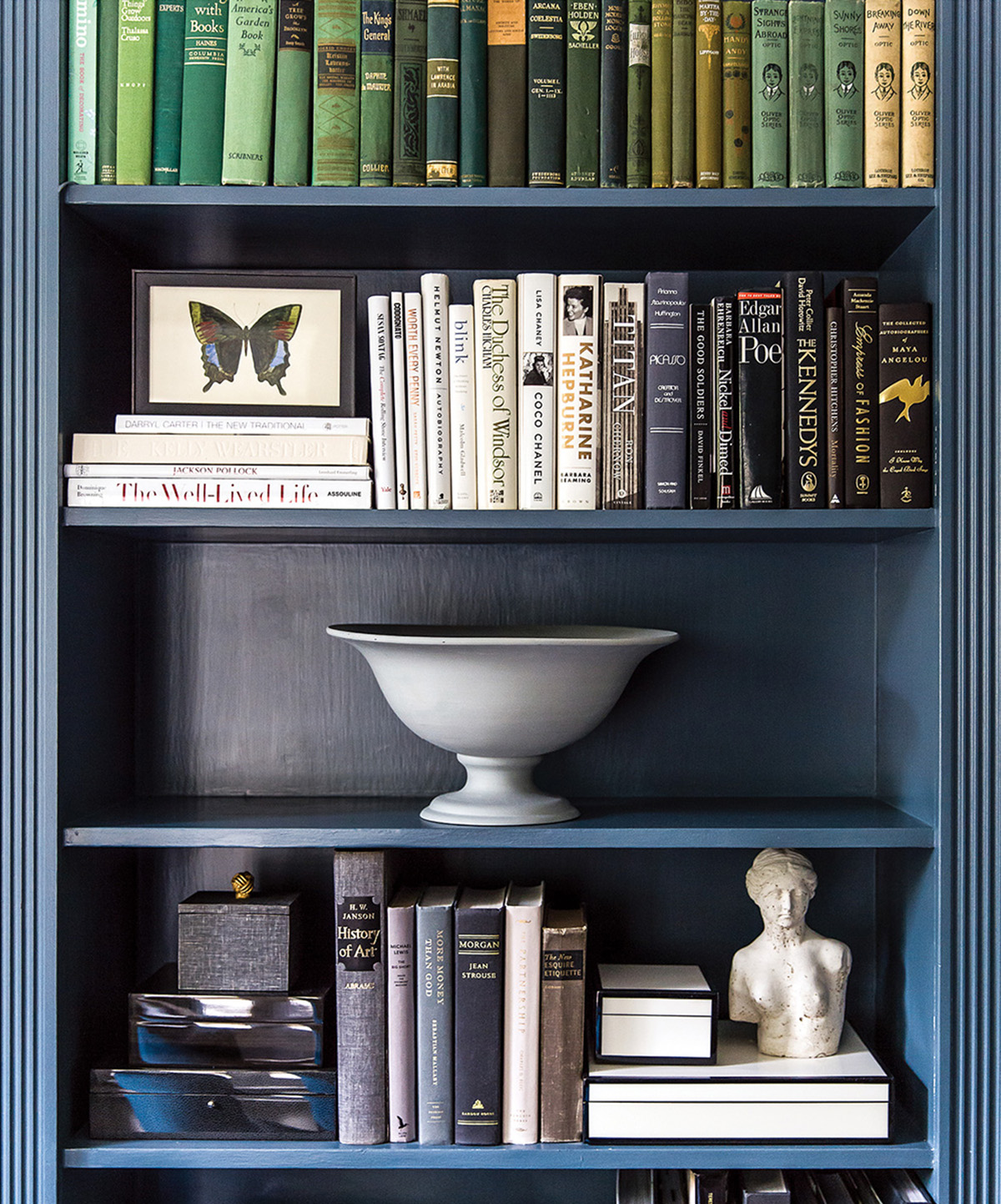 Organizing books by color may be a librarian’s nightmare, but it’s a stylist’s go-to technique. / Photograph by Sean Litchfield 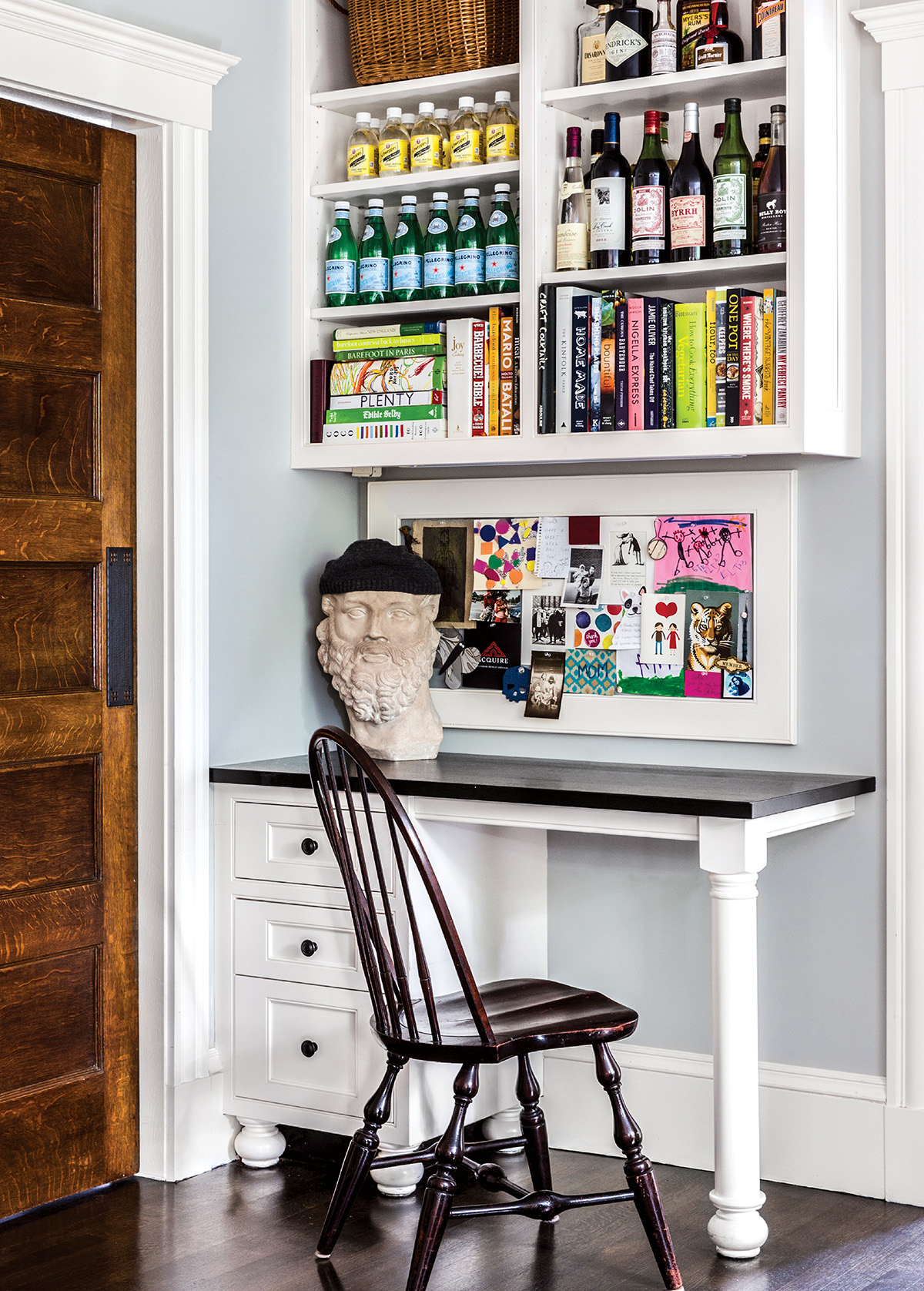 To optimize space, Dalrymple transformed the corner of the kitchen into an office area, augmented by copious storage. / Photograph by Sean Litchfield 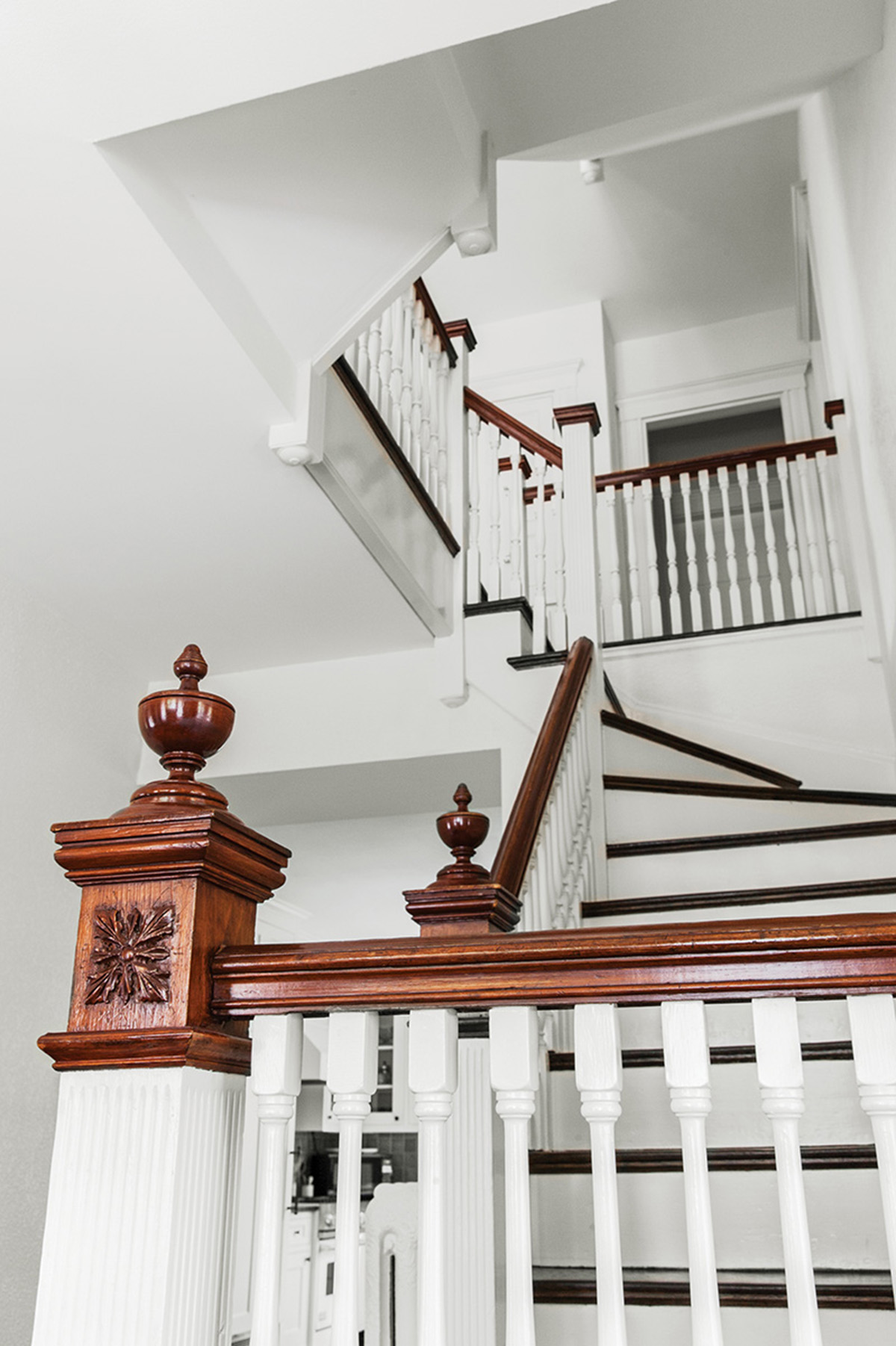 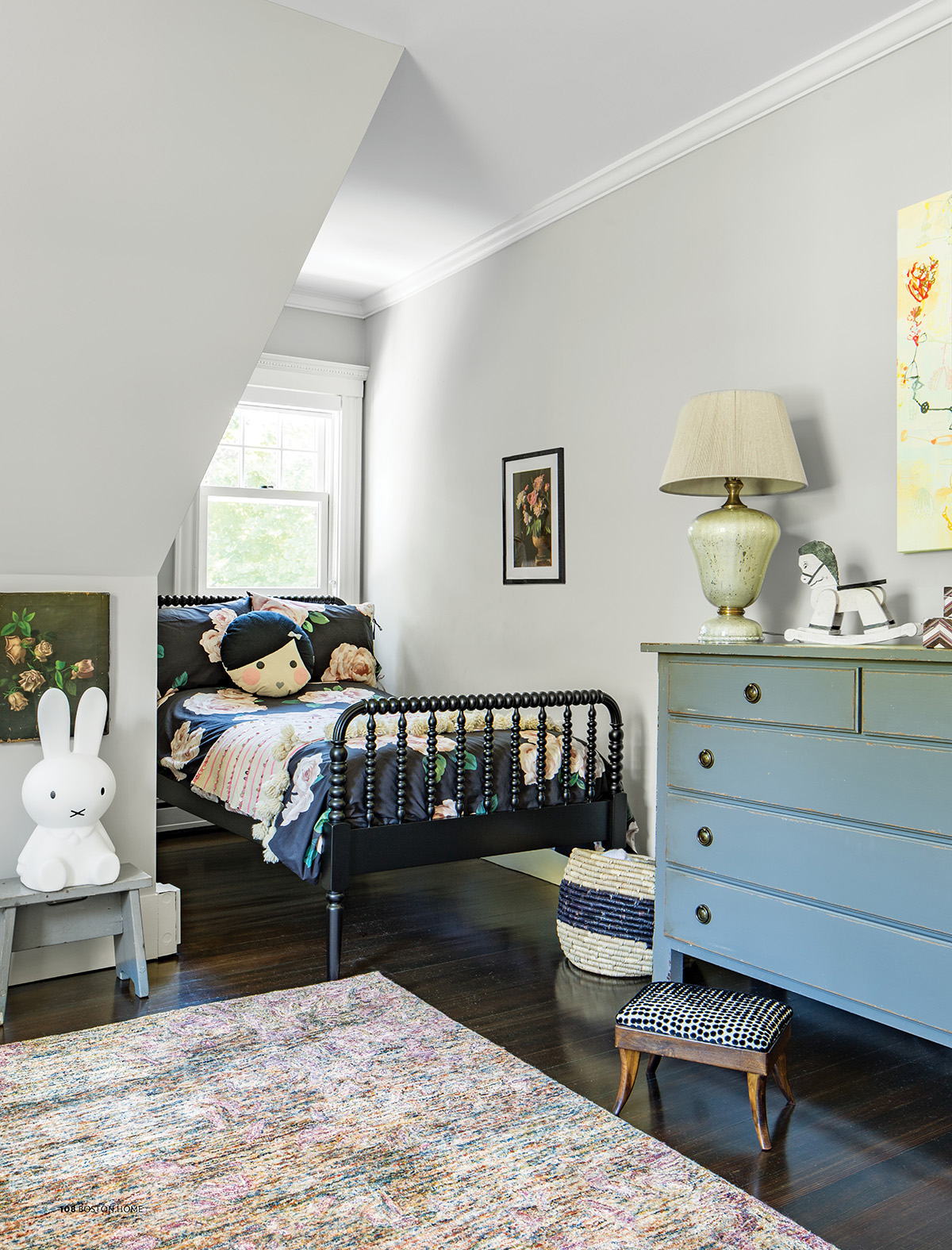 Old and new elements in the daughter’s bedroom include a “Miffy” rabbit night-light on an antique stool, an abstract rug from Dover Rug & Home, and a classic spool bed. / Photograph by Sean Litchfield 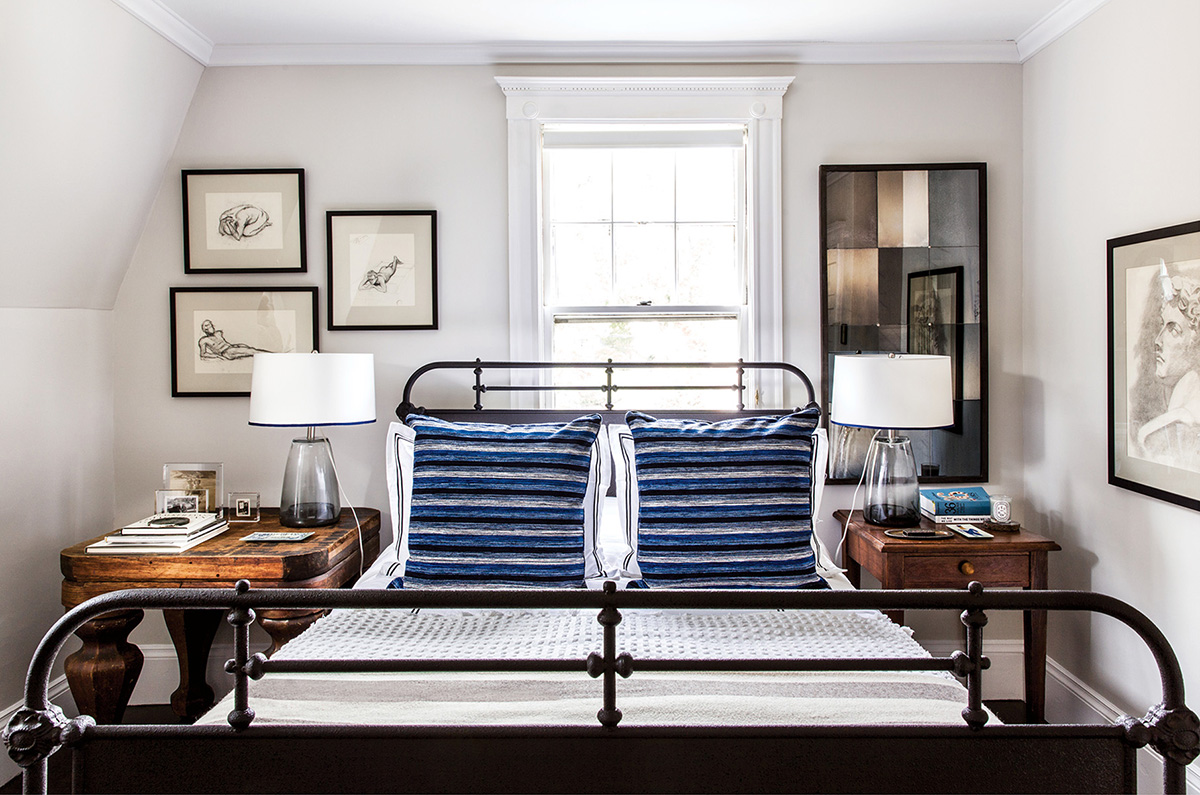 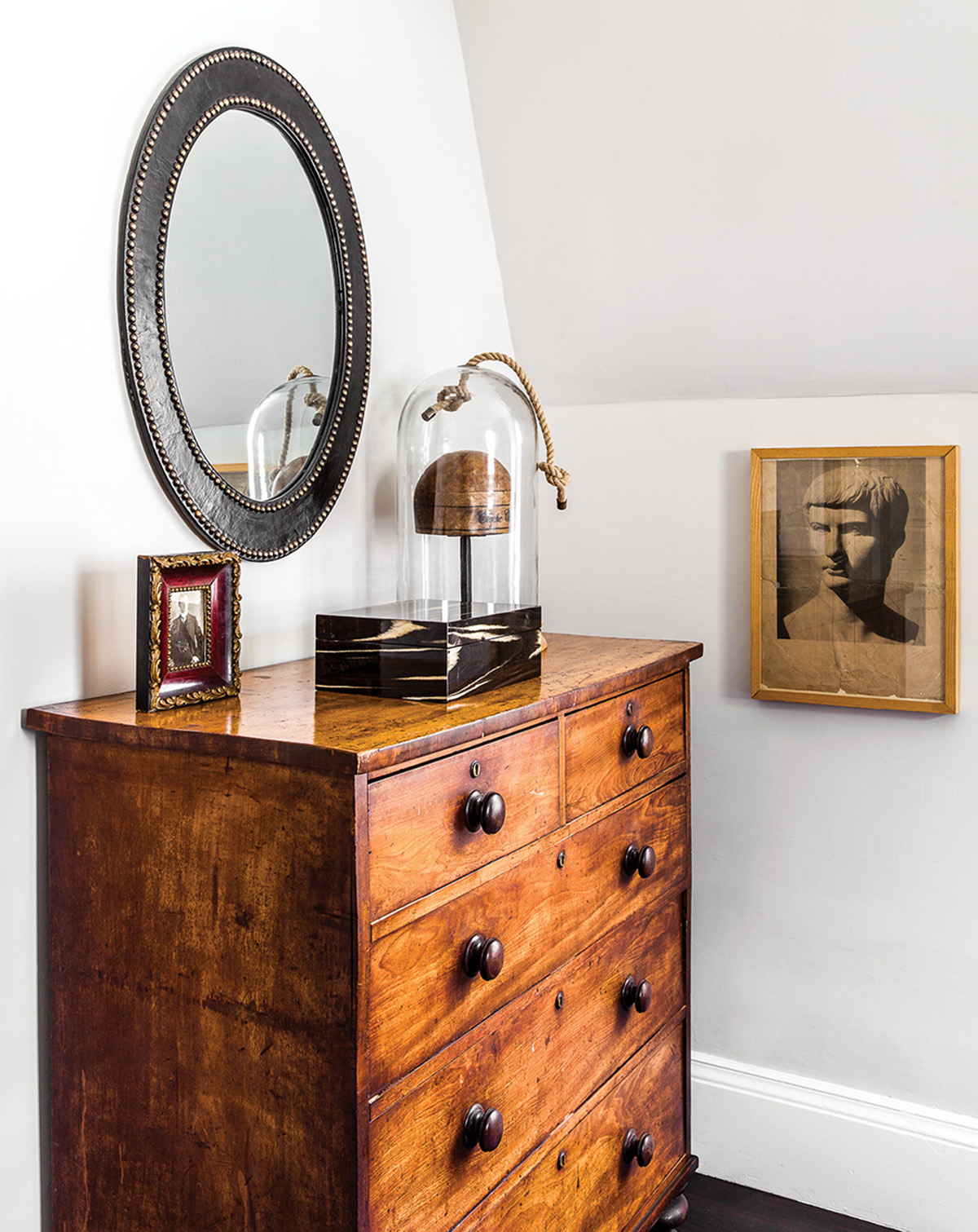 Dalrymple’s collected pieces are thoughtfully displayed and curated throughout the home. / Photograph by Sean Litchfield 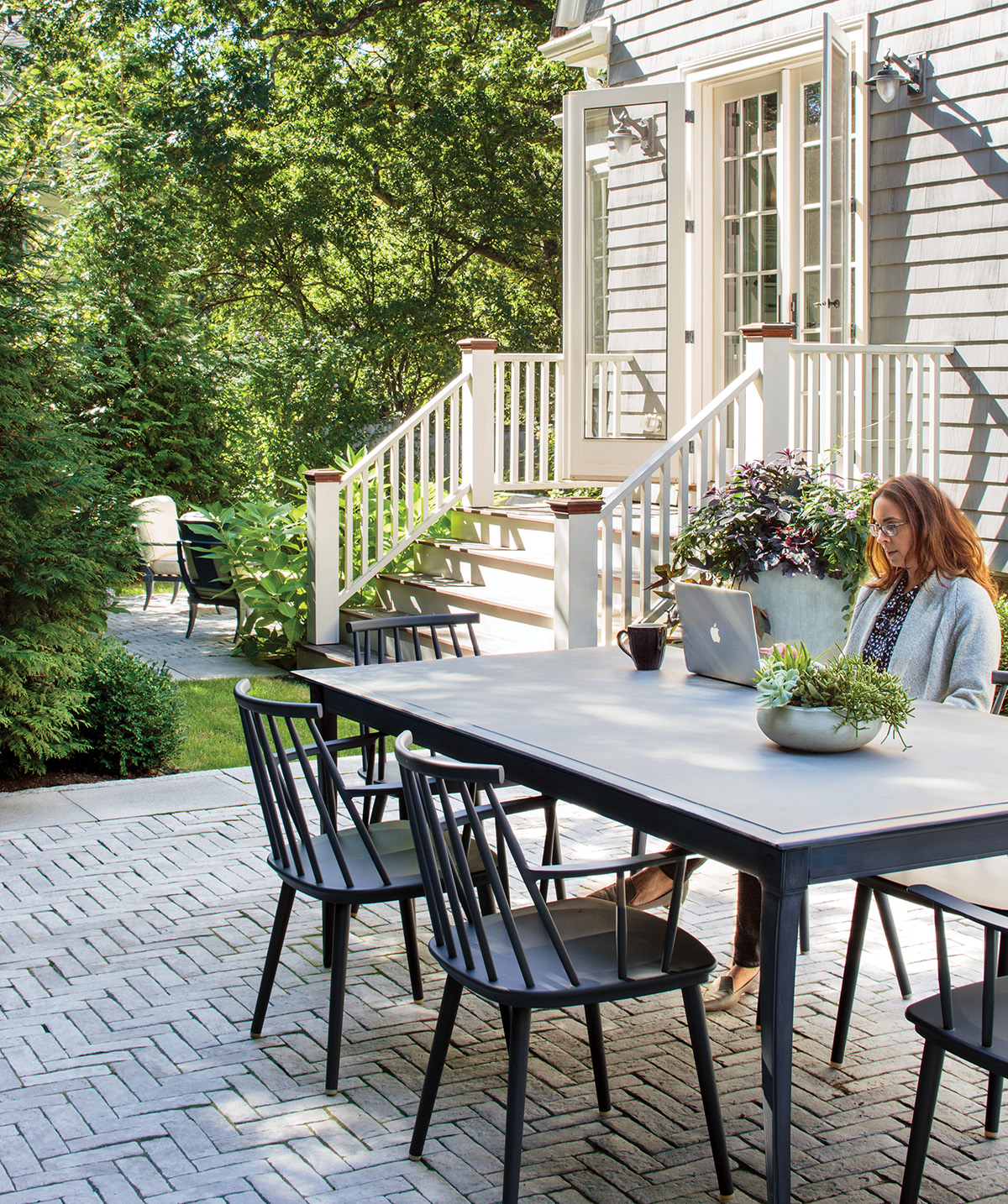