The North End’s Skinny House Is for Sale

This is your (extremely rare) chance to live in a spite house. 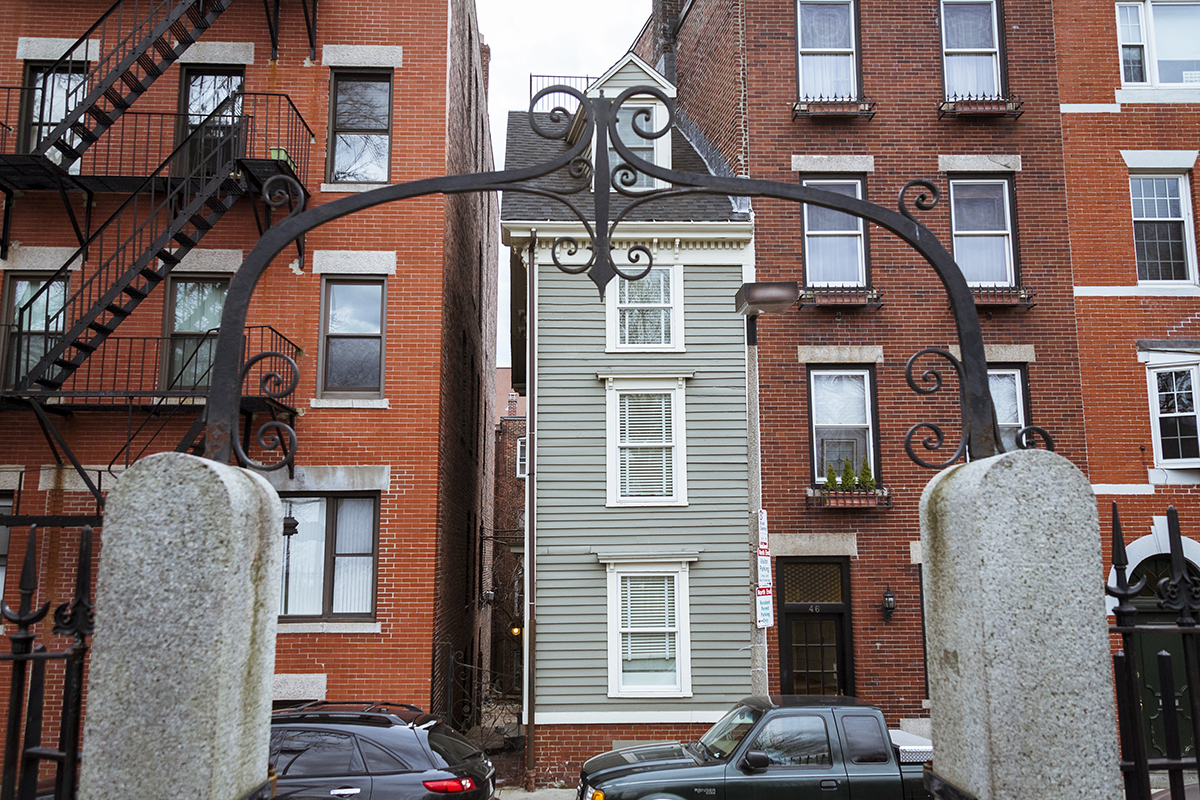 Realtor Eric Shabshelowitz is a little worried about his open house this weekend. His listing at 44 Hull Street is pretty tiny, and he’s not sure how many prospective buyers will be able to fit inside.

“Over 10 is gonna be tight,” he tells me over the phone. Sure, it sounds absurd, until you realize Shabshelowitz is selling Boston’s famed Skinny House.

Nestled between two brick buildings in the North End, the pale green structure was built in 1884 out of spite. According to legend, two brothers inherited a plot of land in the North End from their father. After serving in the Civil War, one brother came home to find that his brother had built a large house on their shared land. Miffed, he built the Skinny House, blocking sunlight and his brother’s views of the harbor.

The 1,166-square-foot abode has been updated quite a bit since the 1880s, and now boasts fancy amenities like a Nest thermostat. Plenty of original details remain, too, including exposed brick, beams, antique hardwoods. Since it was built up against another home, the place isn’t a perfect rectangle. Rather, it’s a uniquely shaped structure that’s about 10 feet wide by 30 feet long. It also has no front door from the street—the main entrance is in a side alley.

The narrow two-bedroom, one-bathroom home is split among four floors, each less than 300 square feet. On the first floor, there’s a kitchen that manages to fit a dishwasher, stainless steel appliances, and a farmhouse sink. It opens up to a small dining area complete with a Juliet balcony. A living room, the bathroom, and another dining area are on the second floor. On the third, there’s a study and a bedroom with built-in bunk beds. A master bedroom makes up the entirety of the top floor.

Shabshelowitz, an agent with Cabot & Company, says it’s amazing how big the place feels for being such a small house. “Every nook and corner is used to maximize the space,” he says. A tiny coat closet, for example, is tucked into a nook by the front door. “It’s tight quarters,” he says. “You find a way to make everything fit.”

And yet, tall folks need not apply. Low ceilings are yet another one of the Skinny House’s quirks. Those in search of breathing room, however, can sprawl out in the grassy backyard or head up to the roof deck.

“I’ll call it huge because it’s most of the roof,” says Shabshelowitz. It offers views of the city skyline on one side, and on the other, a panorama of the harbor unfolds in the distance. “And since you’re on the top of a hill, you really don’t have any obstructions,” he says. Unless, of course, another spite house springs up to block the view.

Interested? The price tag is $895,000. See the listing here and check out the photos below. 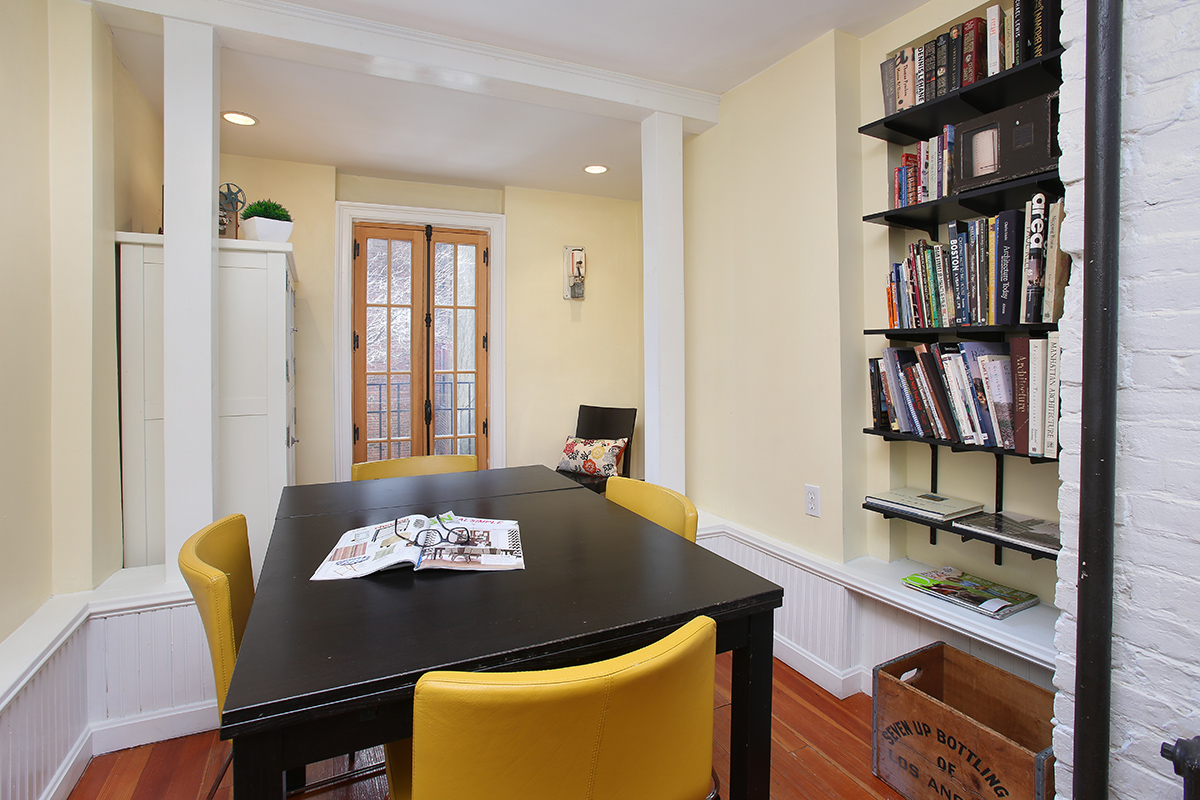 “It’s hard to photograph because it’s so small,” says Shabshelowitz of the Skinny House. Here, a dining area offers built-in shelving and a storage unit. 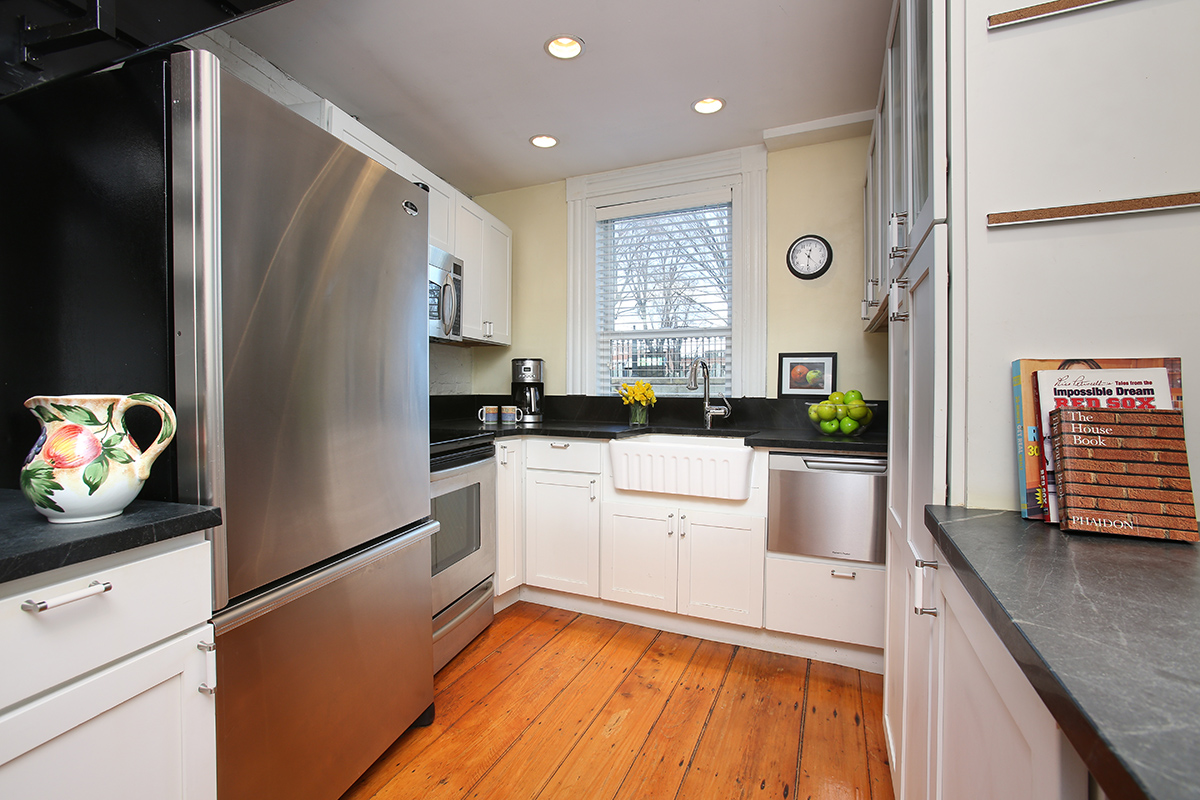 There’s a surprising amount of cabinet space in the kitchen, and it manages to squeeze in a tiny dishwasher. 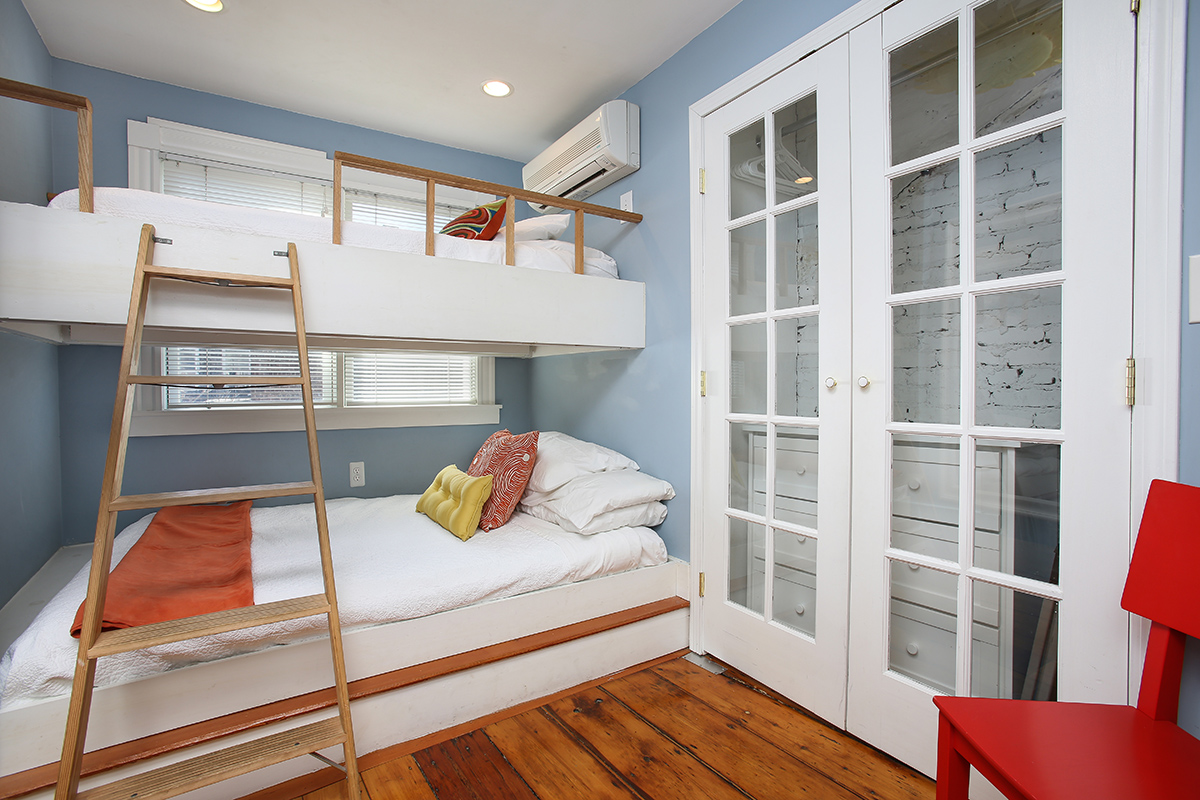 To save space, a dresser is tucked into a small closet in one bedroom. 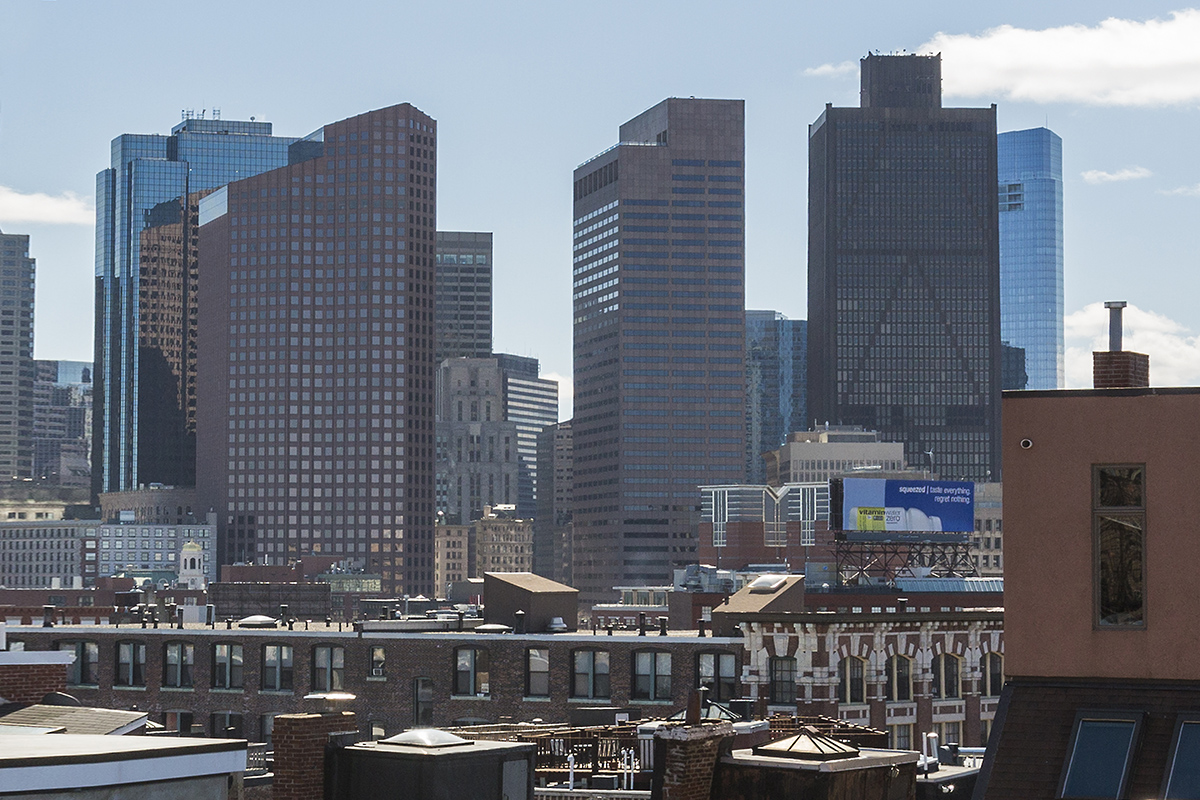 The panoramic views from the roof deck include both the skyline and the waterfront. 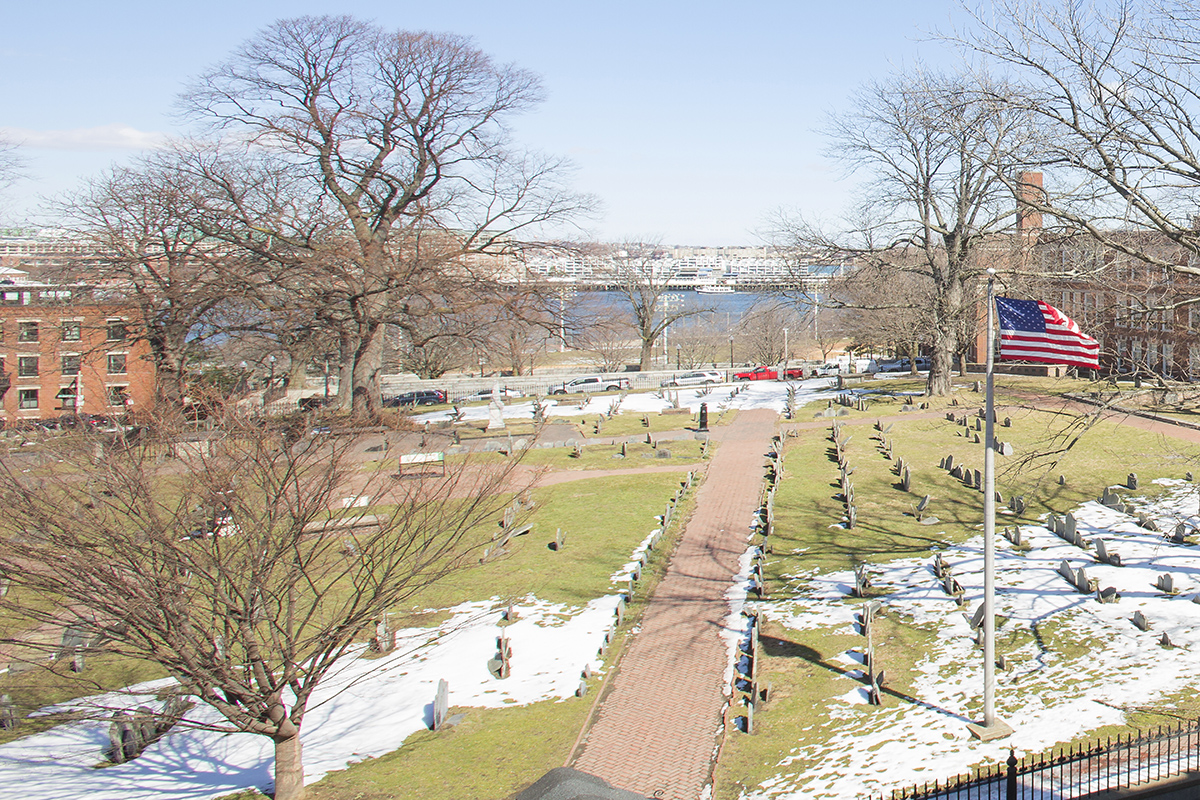 The historical home is situated along the Freedom Trail, across the street from Copp’s Hill Burying Ground.