Joy in the Details: A House on the Water in Orleans 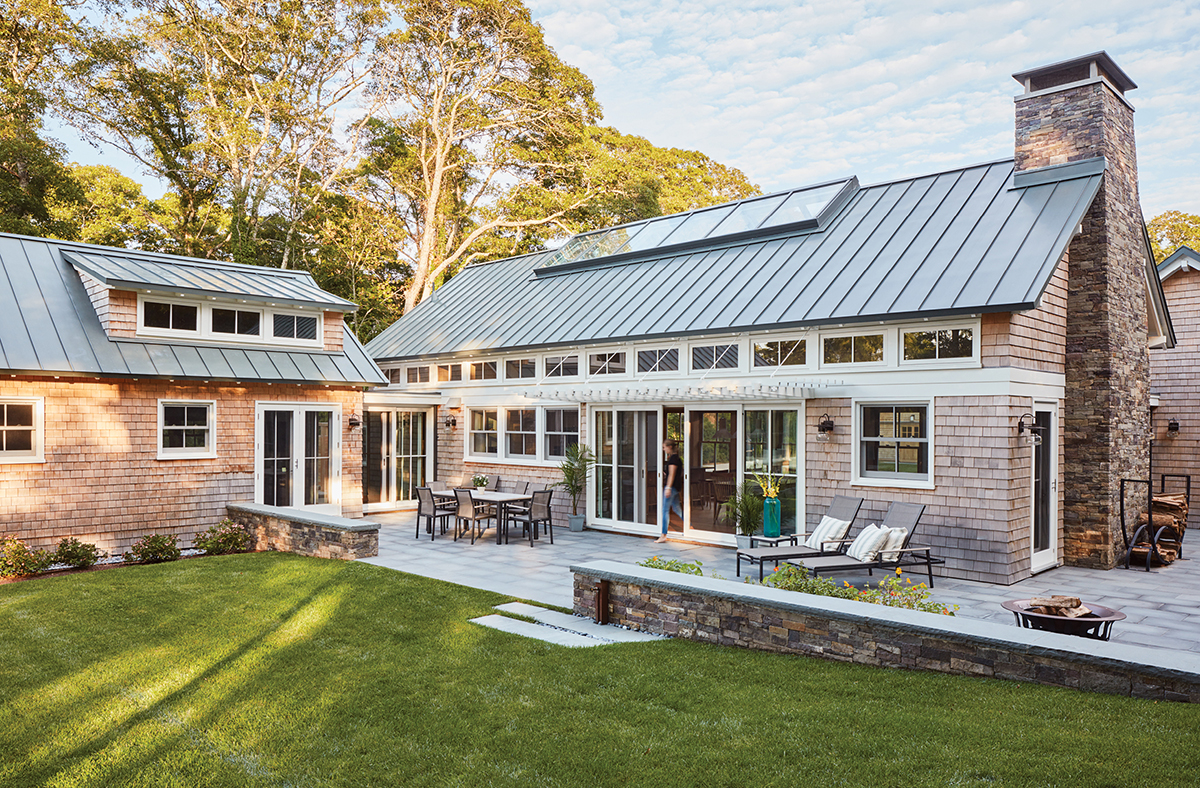 From the street, there’s no evidence of this cherished retreat. Amble down the long drive and you encounter a verdant oasis, shrouded by towering oak trees. A lush back lawn framed with fieldstone-clad walls leads to a sparkling, protected ocean cove. The place has a sense of calm, of ease; here, you truly feel away from it all.

Privacy was a key component of the project, says architect Robert Linn, of Moskow Linn Architects, the Boston firm that designed the secluded Orleans abode: “The homeowners wanted coastal views, but they wanted the house to be hidden from the water and from the road.”

To this end, even though Cape Cod Commission setback guidelines would have allowed the house to be sited closer to the water, the architects opted to place it farther back on a large open plot. “Rather than slamming the house as close to the water as you could, we created a much more interesting sequence,” says architect Keith Moskow, who collaborated with Linn and their associate Sarah Carlisle on the project. “When you come up from the beach, you climb up the coastal bank, walk through the trees, across the lawn, stop at a small foot bath to rinse your feet before stepping onto the terrace, and then you enter the house.”

The homeowners, empty-nesters with two grown children, felt it was essential that the home recede within the natural Cape Cod landscape as much as possible. “They absolutely didn’t want it to be showy,” Moskow says.

While the lot would have accommodated a much larger home, the one-story cedar-shingled structure is just over 3,000 square feet. Each bedroom and the main living space leads to its own bluestone terrace, and when the home’s oversize sliding doors are open, rooms seamlessly connect with the exterior. “For the main living space in particular, the owners wanted inside/outside permeability,” Linn says. “There is lots of glass, so you can see the lawn and the cove beyond from nearly anywhere you are standing.”

Translucent shades for the skylights remain virtually invisible, and can be deployed when the homeowners desire natural light, but not heat. Wood furnishings, upholstered in cool blue tones, set a minimal palette. / Photograph by Jane Messinger 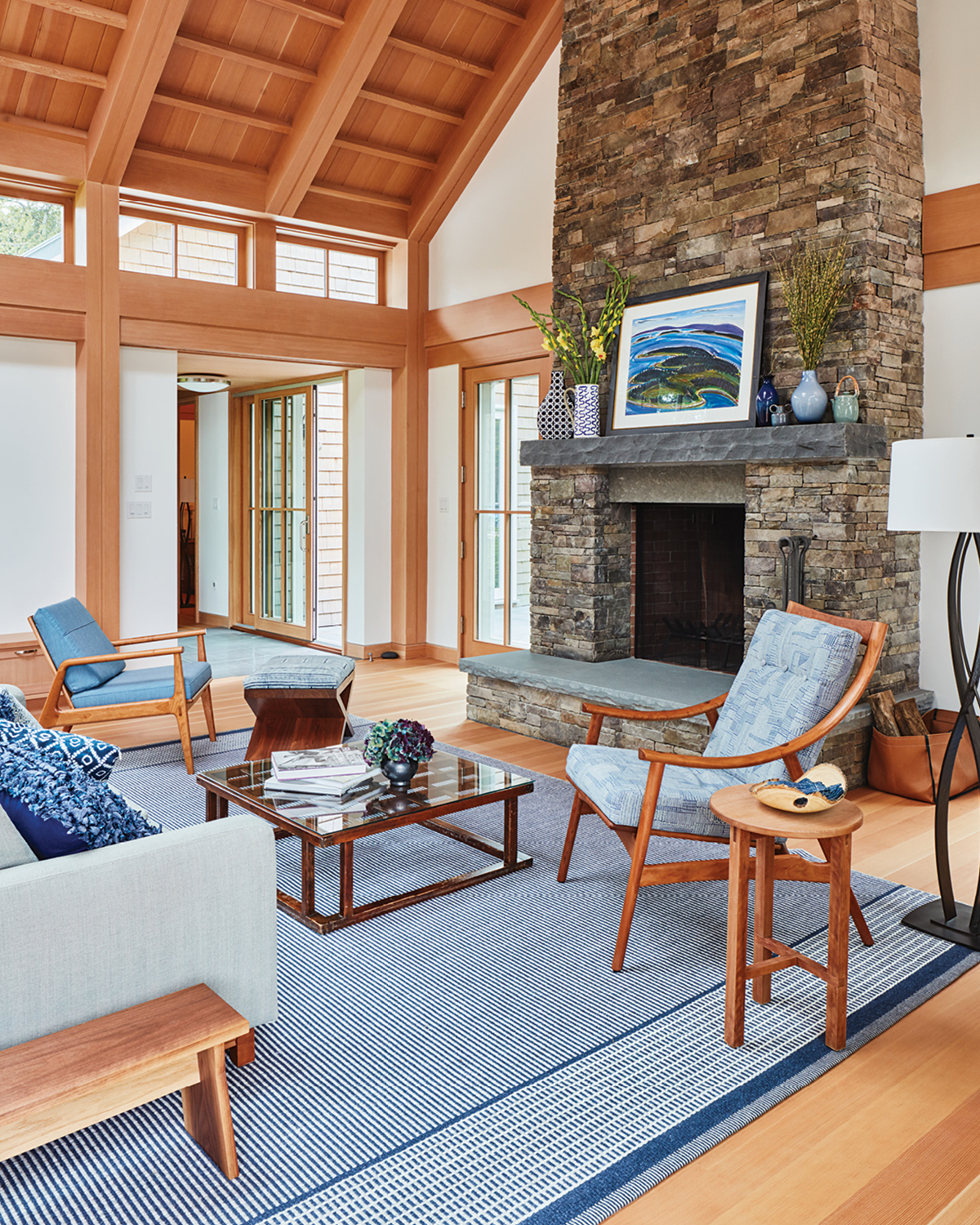 The great room’s focal point is its fireplace, featuring an exposed fieldstone chimney and a hearth capped with bluestone. / Photograph by Jane Messinger

The central great room, which includes the kitchen, is flanked by a master suite and two sizeable bedrooms, each with its own loft. This arrangement arose from the homeowners’ intention to use the house for many years to come, designing it to eventually accommodate spouses and grandchildren. Glass-walled hallways with bluestone flooring connect these areas with the outdoors. “Whether you are looking out the front or back windows from any spot in the house, there is a layering of views,” Linn says. “You see into the lawn and the landscape, as well as some portion of the building projecting out which creates a very dynamic experience.”

Clad with exposed fir, the soaring great room ceiling was inspired by traditional New England and Asian aesthetics, with small horizontal beams running between vertical slats. The husband, who spent part of his childhood in Asia, developed an appreciation for Asian woodworking and joinery, and wanted to incorporate those sensibilities into the home. “The homeowners wanted the interior to reflect their personal interest in wood components,” Moskow says. “Most ceilings are plaster or plywood that you just paint. Here, the beauty is in the warmth of the wood and the way the materials come together.” 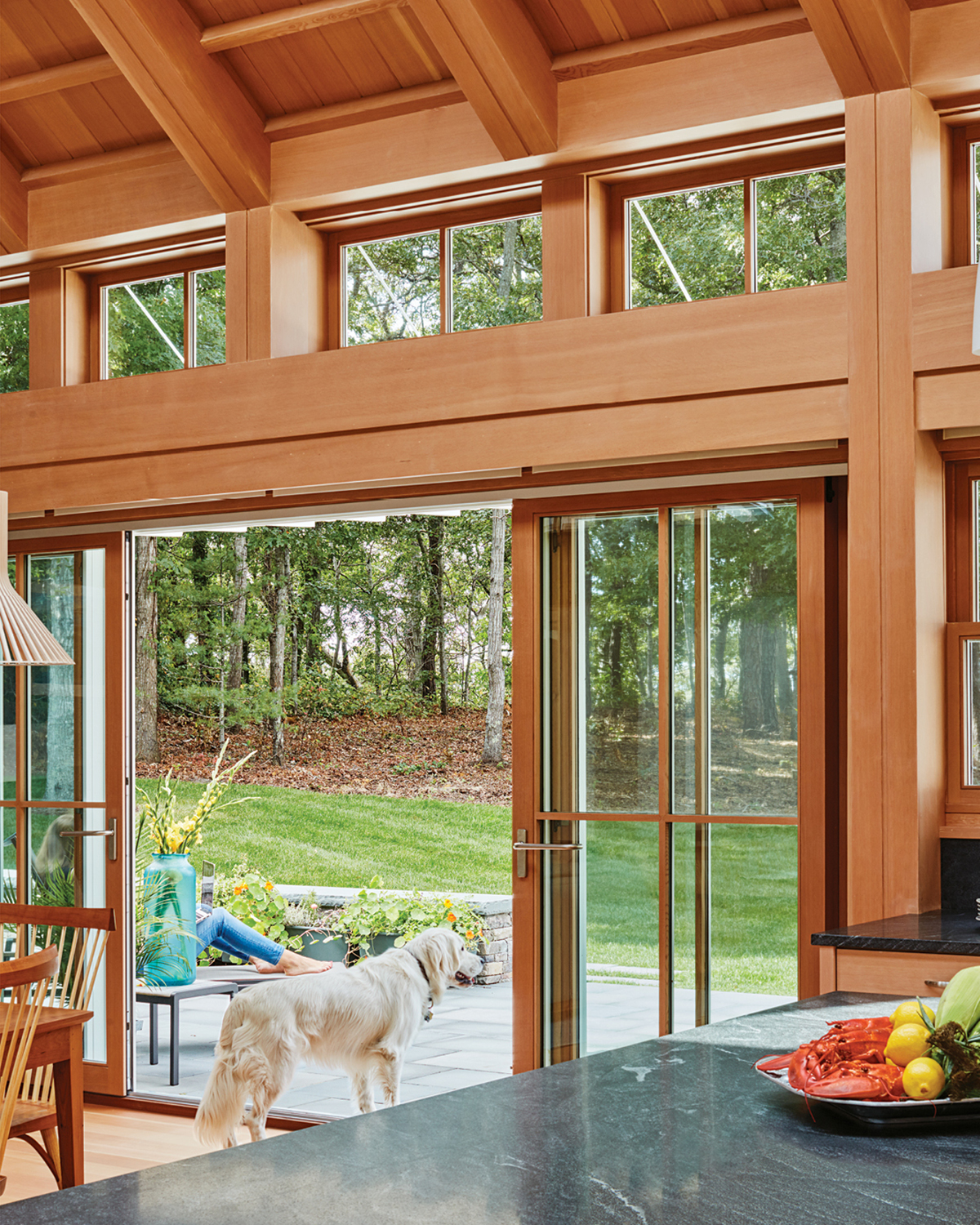 A skylight runs along the ridge of the roof almost the full length of the kitchen and living area, bathing these areas in light. An intricate network of shades is concealed in the ceiling and above the windows; light fixtures are also hidden within the ceiling woodwork.

Wood elements throughout the house create continuity. To ensure a cohesive feel, the team paid careful attention to every aspect of the millwork, Carlisle says. From the floors to the window sashes to the kitchen cabinetry, everything is made of fir. Since the house doesn’t have a lot of extra space, efficiency was paramount. Narrow built-in window seats provide storage; closets have built-in shelving and sliding doors to conserve space.

The lone outbuilding on the property serves as a shop for the owners, who are not only fans of fine carpentry, but avid woodworkers themselves. Some of the home’s Shaker-style furnishings are the family’s own handiwork; others are manufactured by Thos. Moser. The furniture echoes the vibe of the architecture. “It’s an aesthetic that honors craftsmanship and the beauty of simplicity,” Moskow says. “The house is sort of like an egg. The outside might be a little bland, but inside it has all this richness.” 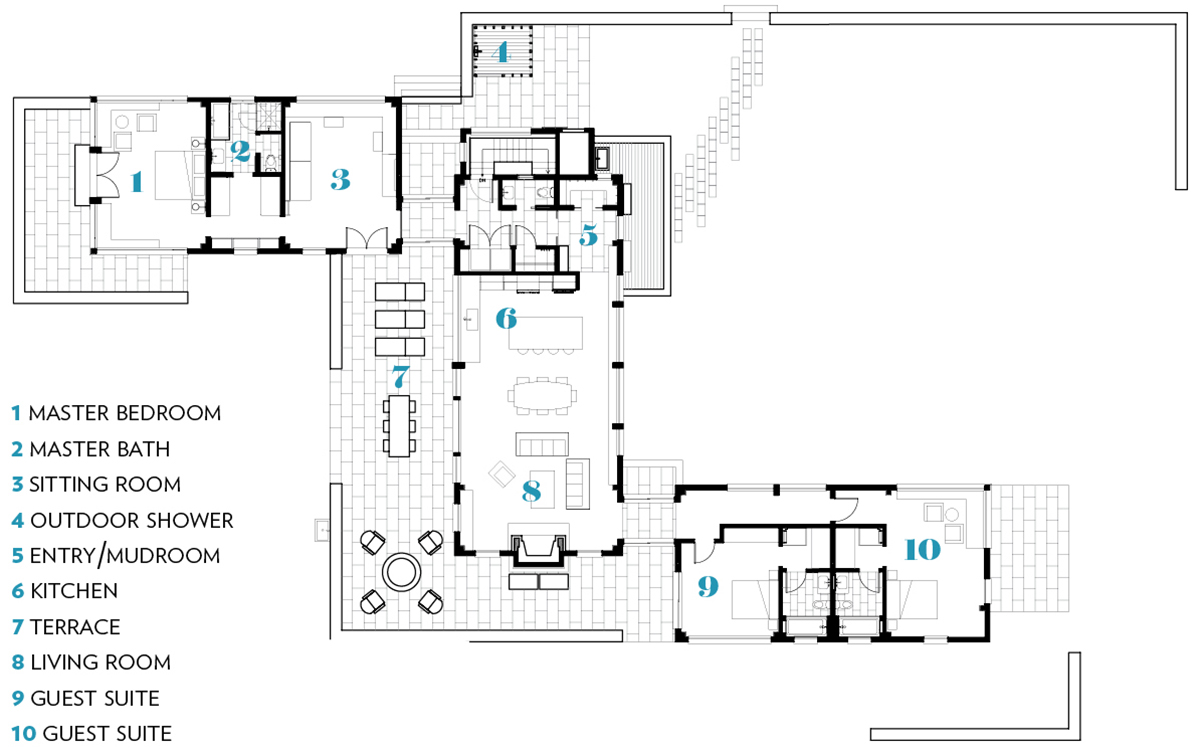 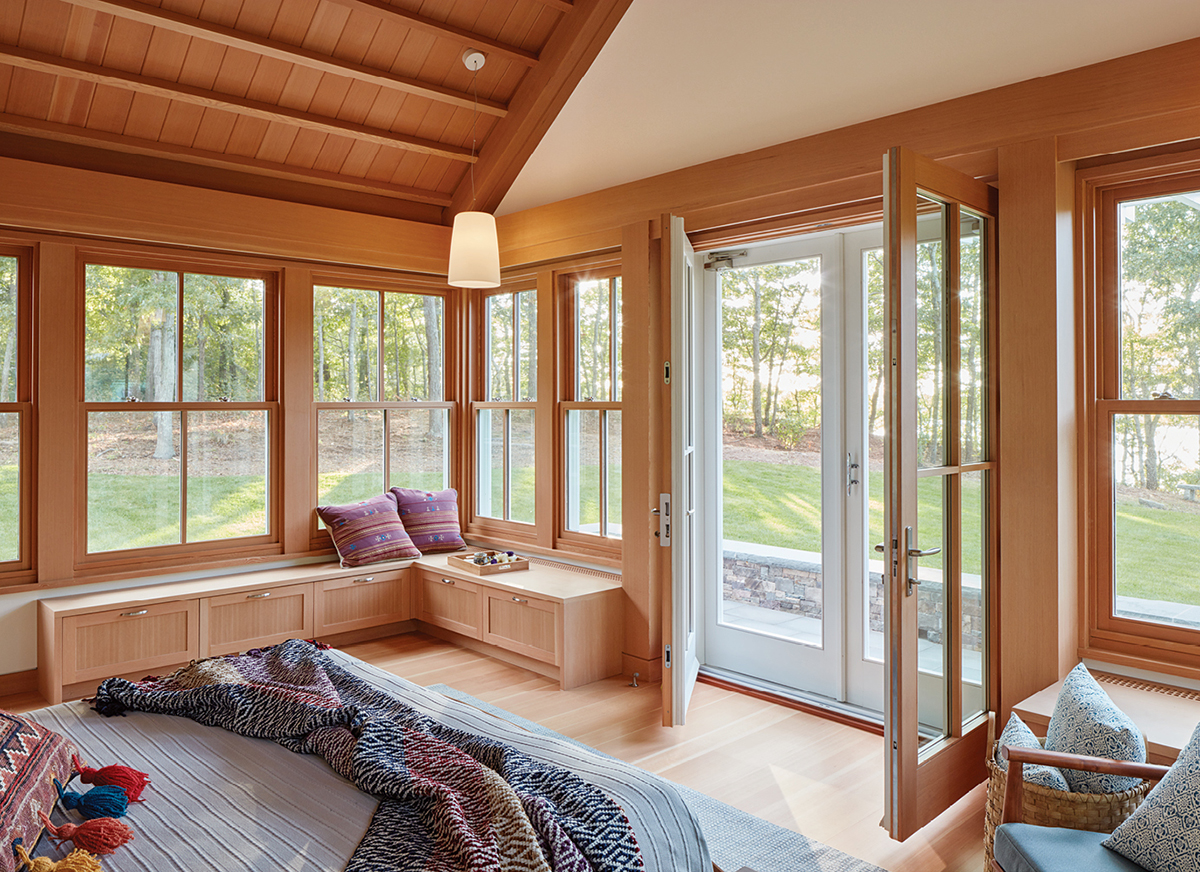 The main terrace can be accessed from the master bedroom, which features the same ceiling details as the great room on a slightly smaller scale. / Photograph by Jane Messinger 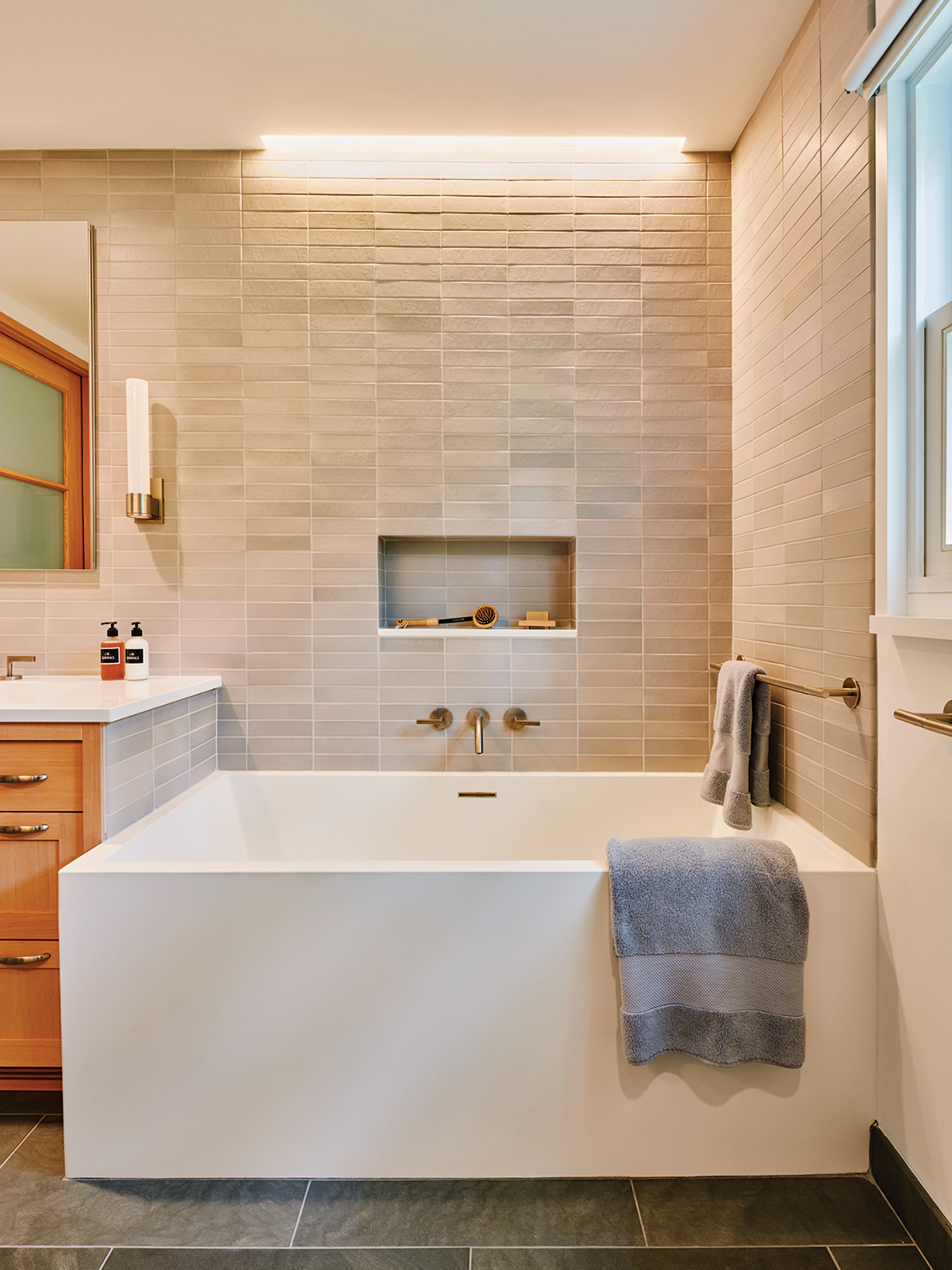 The master bathroom floor is made of bluestone tile, echoing the rustic feel of the home’s many terraces. / Photograph by Jane Messinger 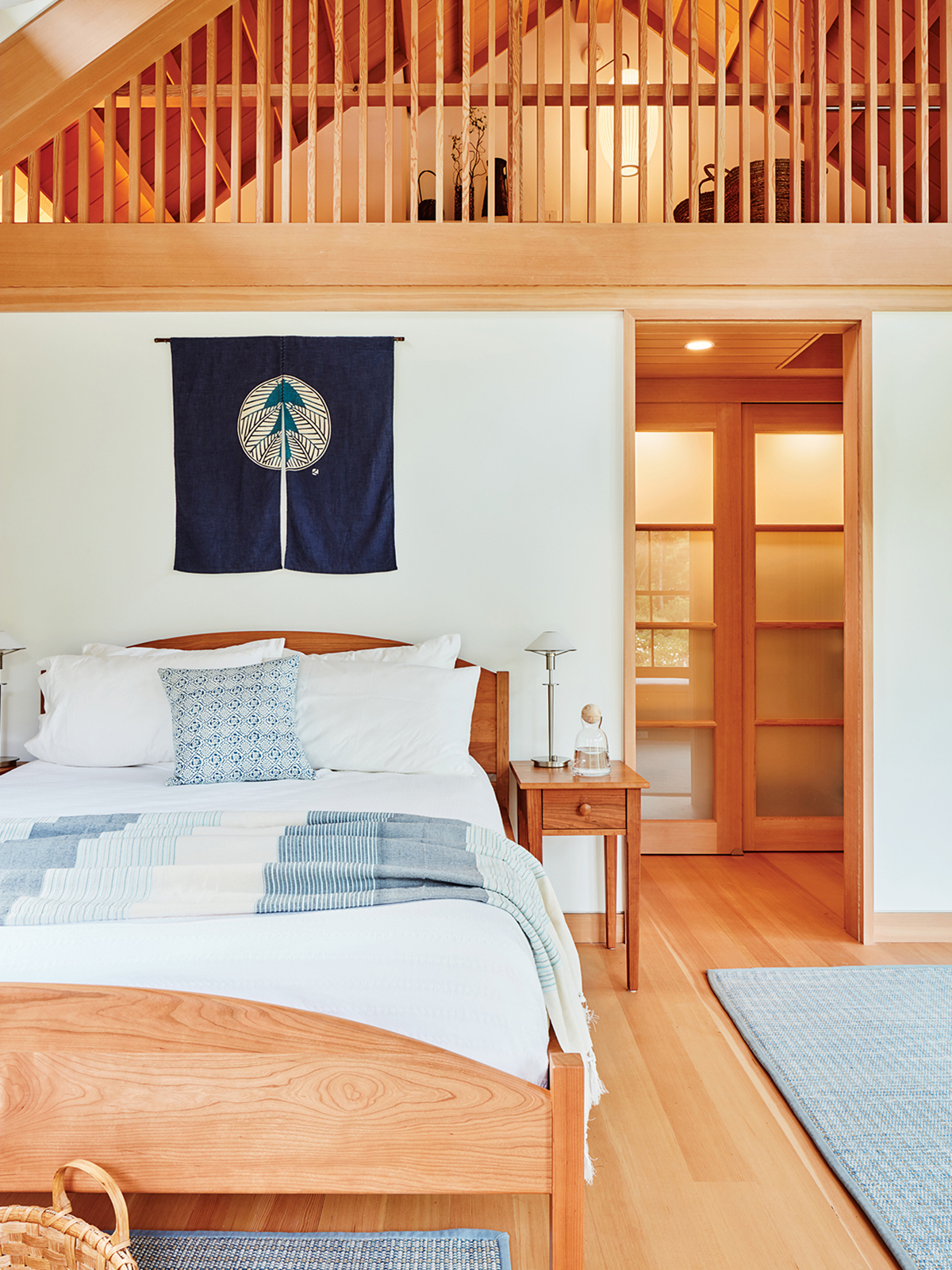 In the guest bedroom, a loft, which has enough space for a low bed or futon, is accessed by a built-in ladder. The sliding closet doors feature frosted glass panels that bounce light around the room. / Photograph by Jane Messinger 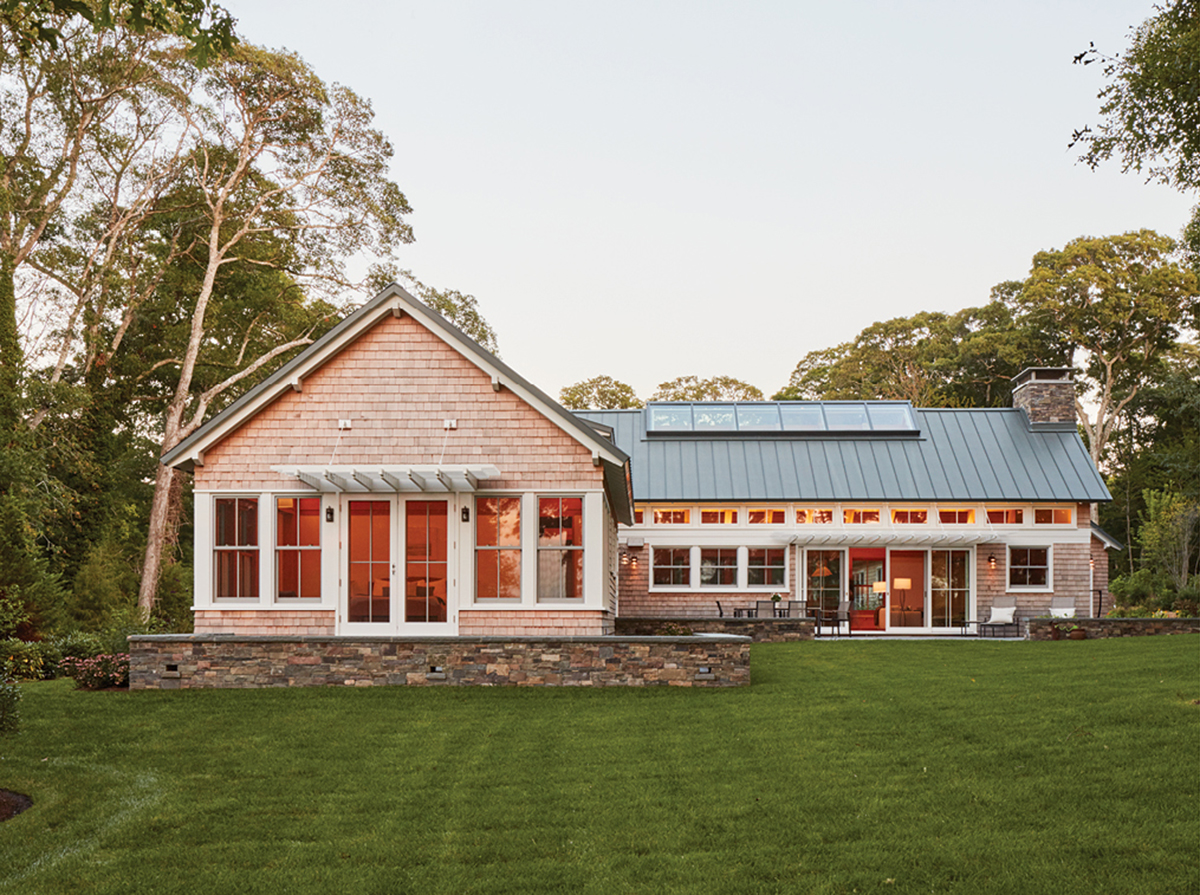 The dark-charcoal-hued standing-seam metal roof is made of zinc and titanium. / Photograph by Jane Messinger 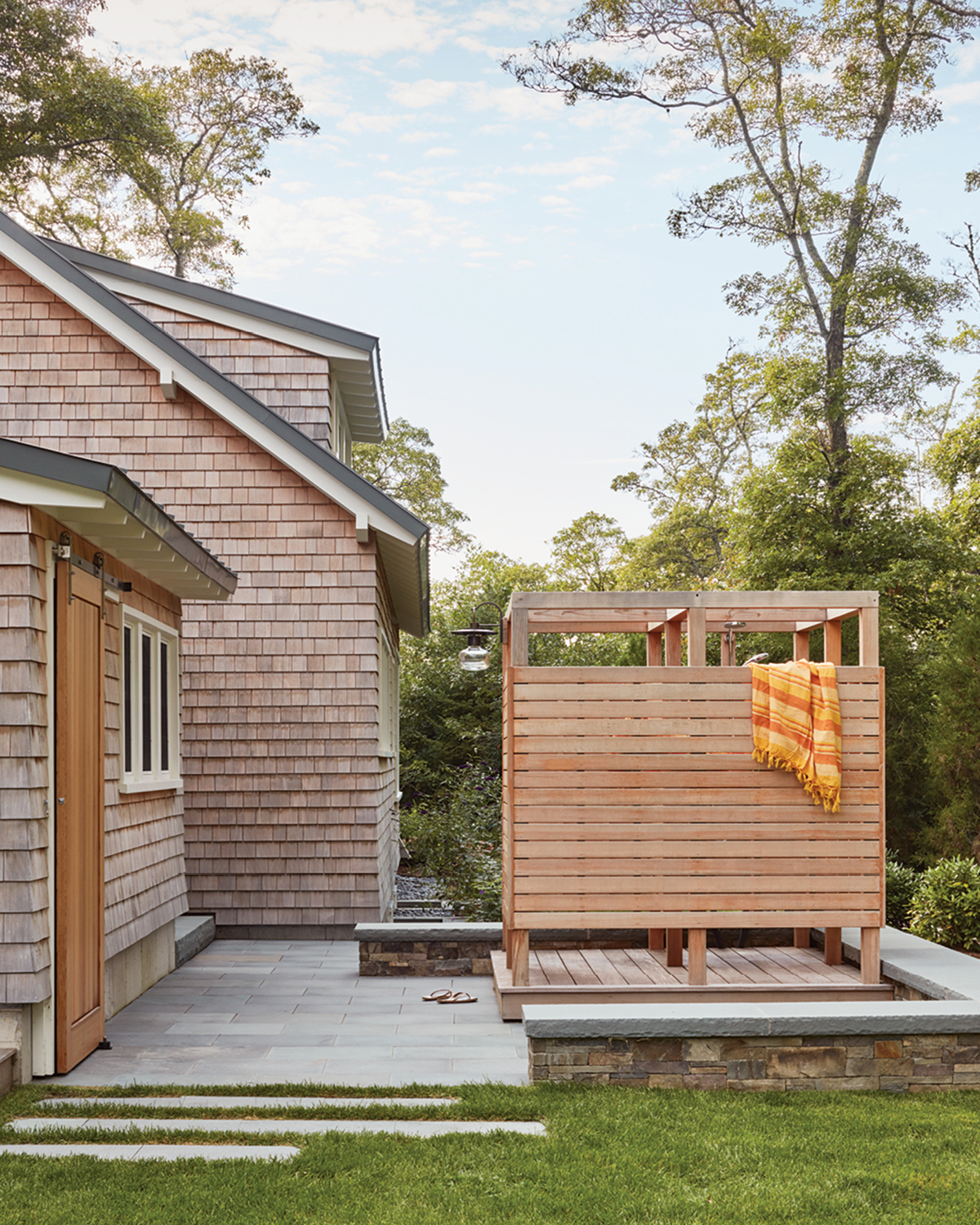 An outdoor shower can be approached from the master bedroom wing or from the yard. / Photograph by Jane Messinger 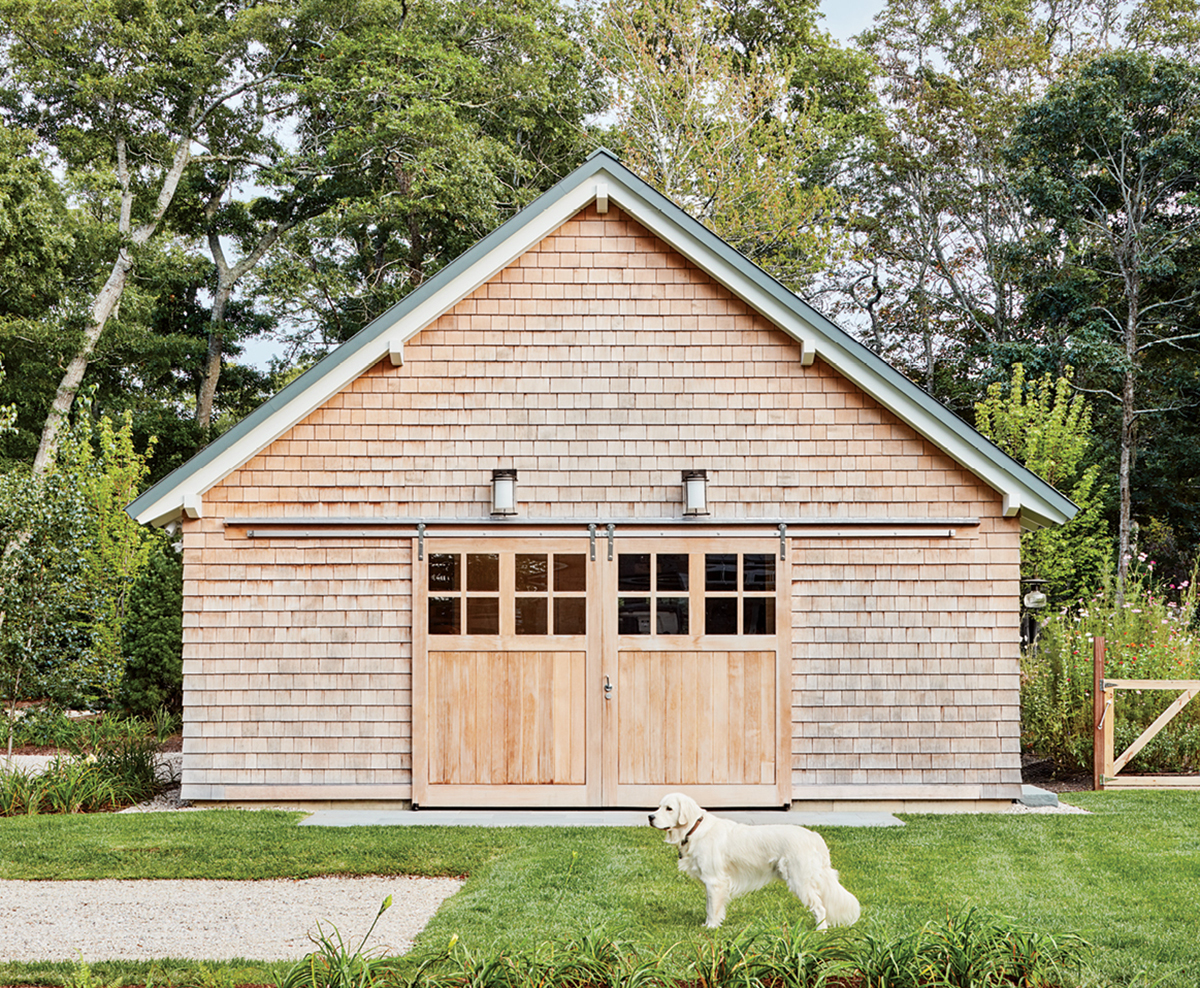 An outbuilding with sliding double doors contains a woodworking shop and space for two cars. / Photograph by Jane Messinger 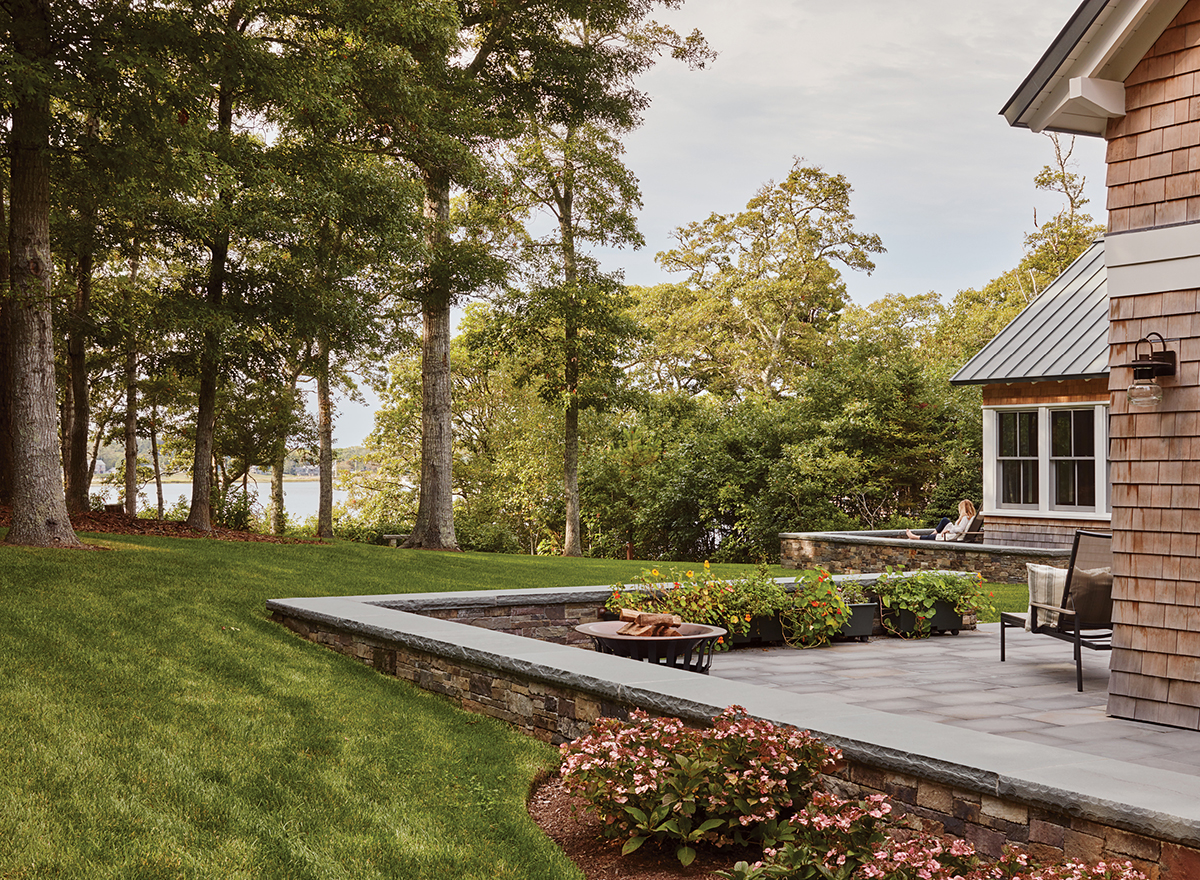 The home’s deep eaves provide shading, which helps keep the interior cool during the hotter months. / Photograph by Jane Messinger 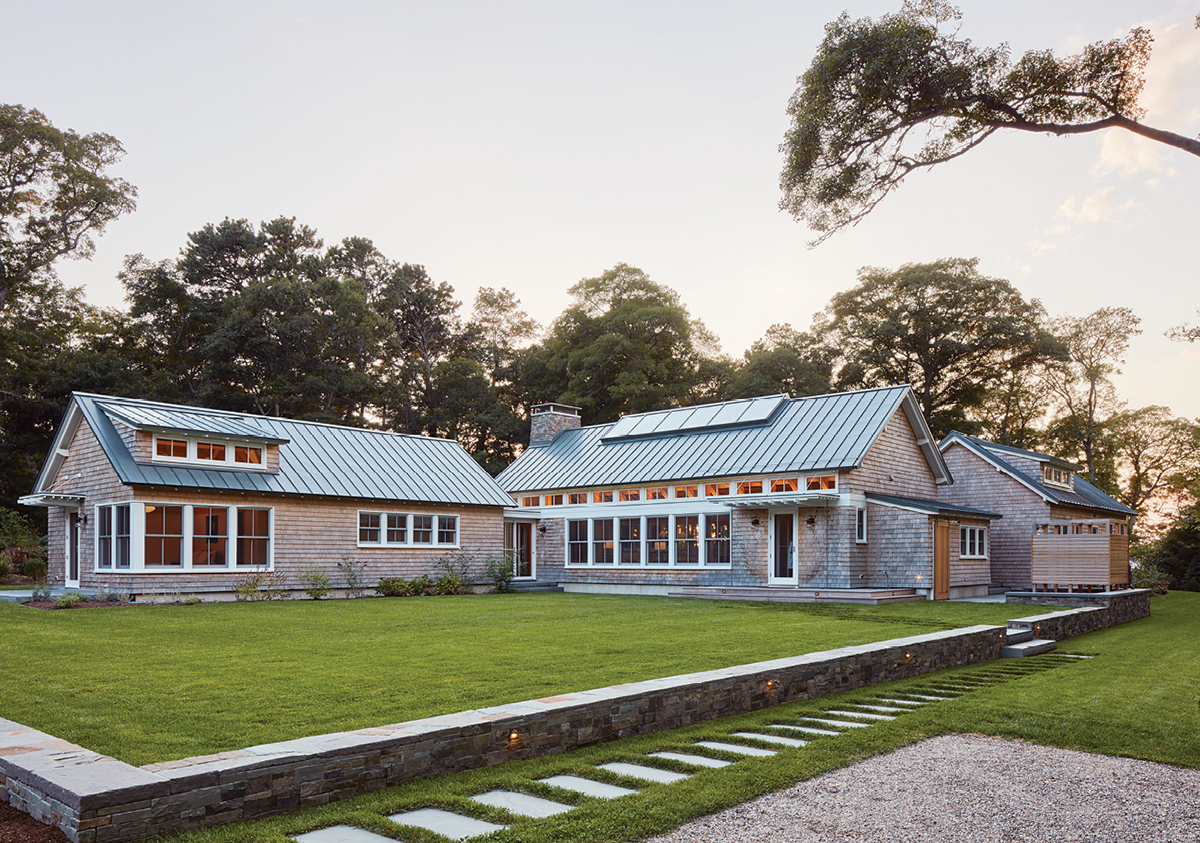