Life in the Round: A House with a Circular Center

How a second home on Martha's Vineyard became a first for a Washington, DC, power couple. 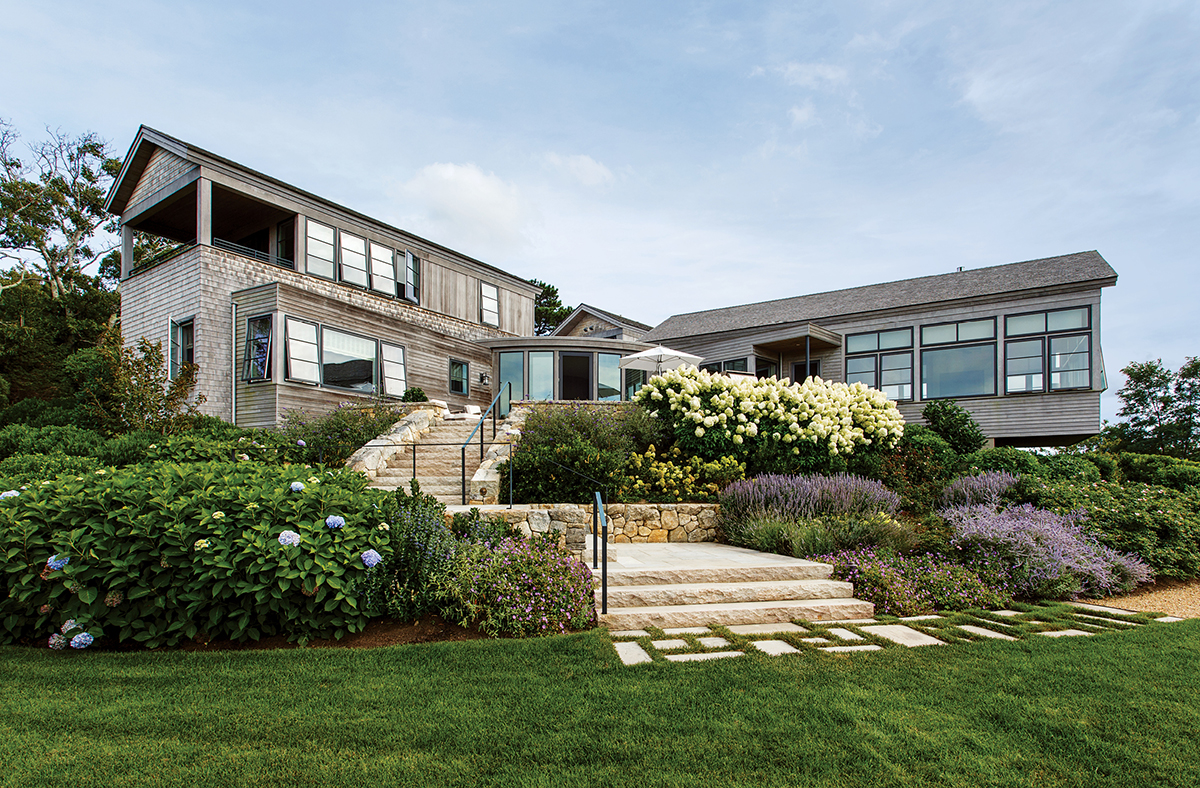 The landing was designed to be gradual “so you didn’t feel like you were climbing tons of stairs,” says architectural designer Phil Regan. / Photograph by Bob O’Connor

Ken and Dede Feinberg had owned their 5-acre plot of land in West Tisbury for 10 years. “And for nine of those years,” Ken says, “I was interested in selling it.” The couple had been vacationing on Martha’s Vineyard for some time, drawn to the island by its quiet charm and offer of respite from their busy lives in Washington, DC, where Ken is a prominent attorney (perhaps best known for his work administering compensation to victims of such crises as 9/11 and the BP oil spill) and Dede a busy philanthropist.

The Feinbergs knew that the property, one of the few remaining island parcels with views of both inland and ocean, held great potential—that’s why they bought it. But accessing those views would prove difficult. The land was sandy, hilly, and overgrown with pitch pines. An existing house on the property had been built on a flat part of the lowest grade, and consequently, Dede says, “looked out at the trunks of the trees.”

In 2009 the couple made one last effort to try to salvage the land: On a recommendation, they contacted Phil Regan, an architectural designer and principal at the Vineyard Haven firm Hutker Architects. When Regan visited the property for the first time, he knew that it would prove challenging, but worth the effort. He walked to the highest point and took in the magnificent views, trying to decide which was the best. That’s when the idea came to him: What if he could build a home that maximized all of them?

Back at the office, he sketched a house designed around a central elevated circular platform that would lift the living space well above even the highest point, and offer stunning views to the north, south, east, and west. From this circular entry hall, several spokes would protrude outward, each leading to different living areas and vantage points.

Though Regan suspected the Feinbergs had a more traditional house in mind, he says, “I was hell-bent on proving something more conceptual would fit.” One major selling point, he reasoned, was that this was their “fun home,” not their primary home. 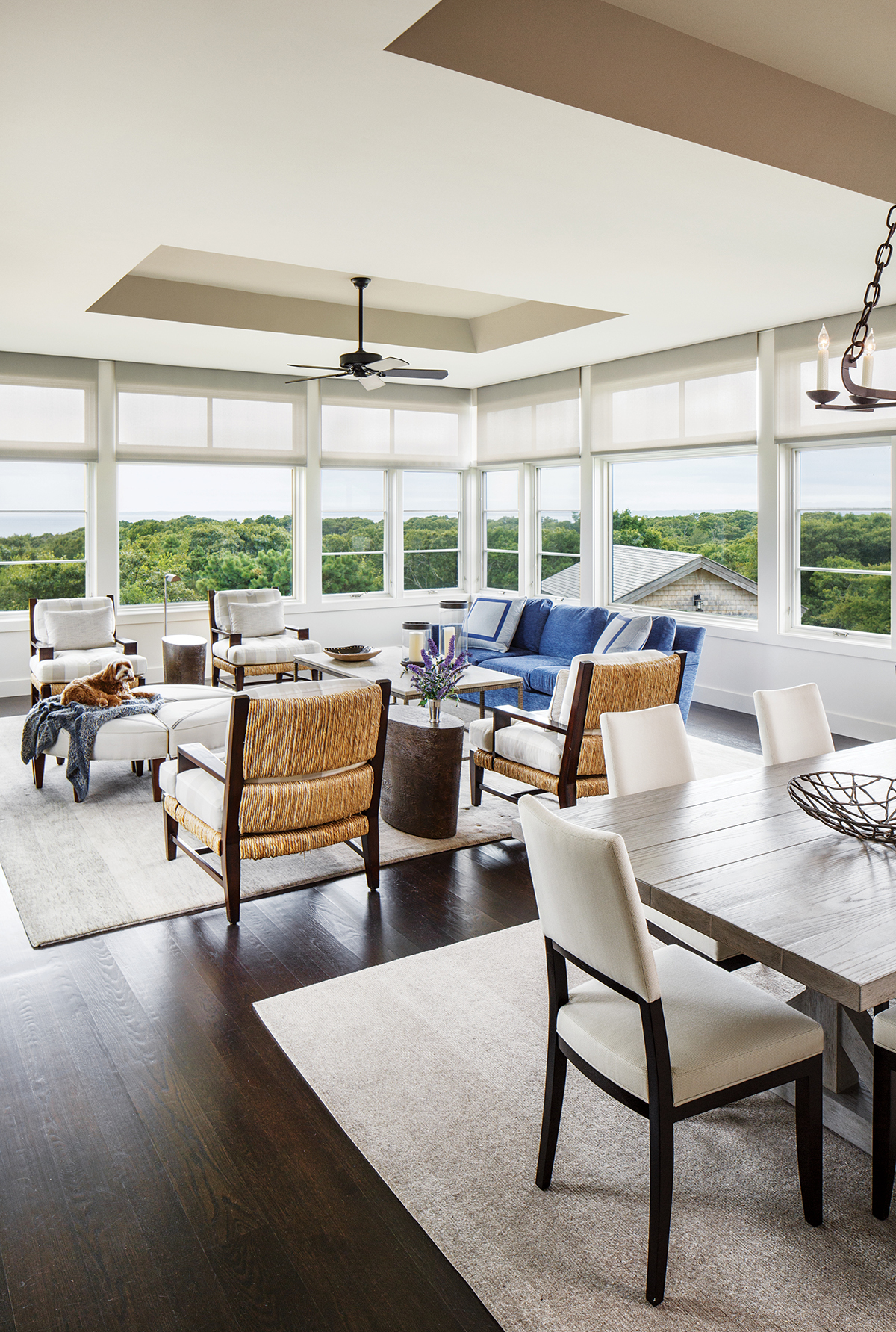 The view from the living room extends out to Paul’s Point. / Photograph by Bob O’Connor 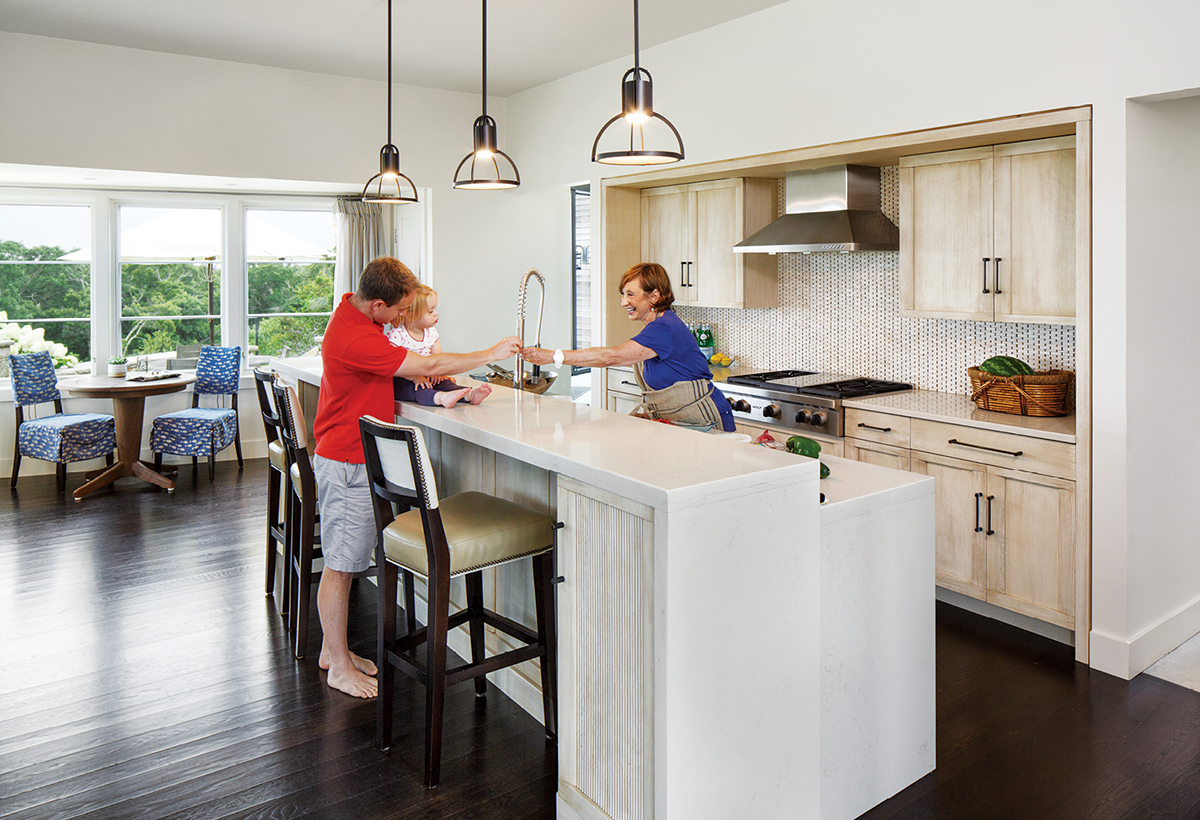 The kitchen features custom cabinetry by Venegas and Company and lighting from Holly Hunt. / Photograph by Bob O’Connor

The library and guest bedroom would look out over the inland valley, while the great room offered views of the end of Vineyard Sound. The windows in the master suite and its study would gaze far out to the Elizabeth Islands. The entry terrace, screened-in porch, and gardens continued the circular motif. The plan also kept parking low on the site; the homeowners would have to walk a few extra steps from the driveway to the front door but, frankly, who wants views of cars?

Regan was so enamored of the concept that he showed Dede just one sketch, along with a basswood model and computer-generated views. He knew he’d “either hit a home run or be fired on the spot.”

Dede said nothing throughout the entire presentation, Regan says. At the end, “she paused and said, ‘I love it…I love that I could never have imagined this.’” Dede remembers the moment, too: “Ken and I wanted three things. A place that would allow our three children and their partners to have all the privacy they ever wanted but afford public space to come together. Lots of light and lots of cross-ventilation so we’d only have to use the AC on the warmest of days. Lastly, we wanted a house full of surprises.” Regan’s design checked all the boxes. 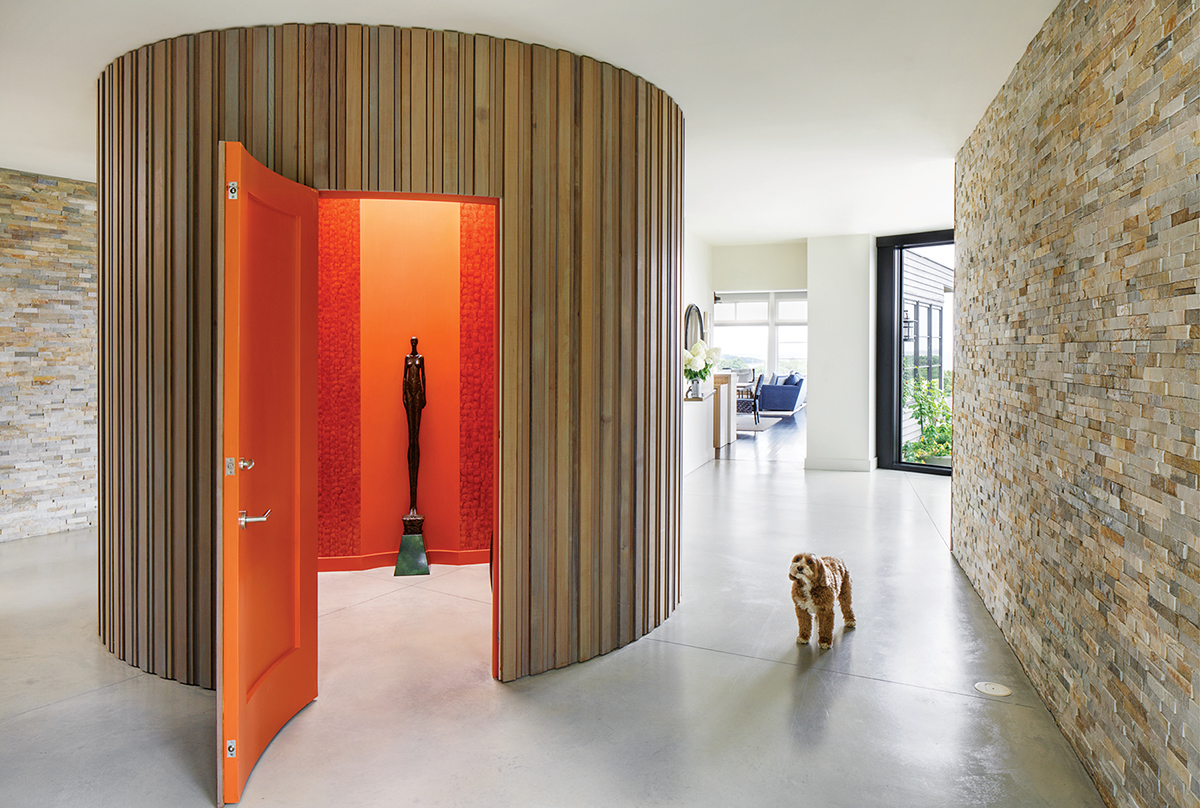 A round powder room in the middle of the entryway echoes the home’s circular theme. / Photograph by Bob O’Connor

The design process took 10 months and construction 14, led by Dan Perry, a year-round Vineyarder. Meanwhile, Dede worked closely with the late DC-based interior designer Jerry Copeland, a longtime friend, to design interiors that wouldn’t feel seasonal—or predictable. “At the time, we lived in a Georgian Colonial in Bethesda,” she says. “If you had half a brain, you could figure out how the furniture could be laid out. I didn’t want that.” And since it was a place they’d use year-round, giving it a beach-house vibe also felt wrong. So Copeland came up with unexpected solutions, such as a bright-orange powder room (which Regan had designed to be circular) and a living room in blues and browns—a nod, says Dede, to “the sea and the land and the sky. Jerry knew the sort of life we envisioned living here, and he designed to it perfectly.”

What Dede describes as the “icing on the cake” came at the hands of landscape architect Kris Horiuchi, of Falmouth firm Horiuchi Solien, whose designs provided a quiet complement to the indigenous landscape.

The Feinbergs say the home has exceeded their wildest expectations. And after recently trading in their Bethesda Colonial for a condo, they’re able to spend even more time in their oceanside escape. “We’re up on the Vineyard once a month, most holidays—every chance we get,” Ken says. “When there’s a time to get together and be a family, we go to the Vineyard.” 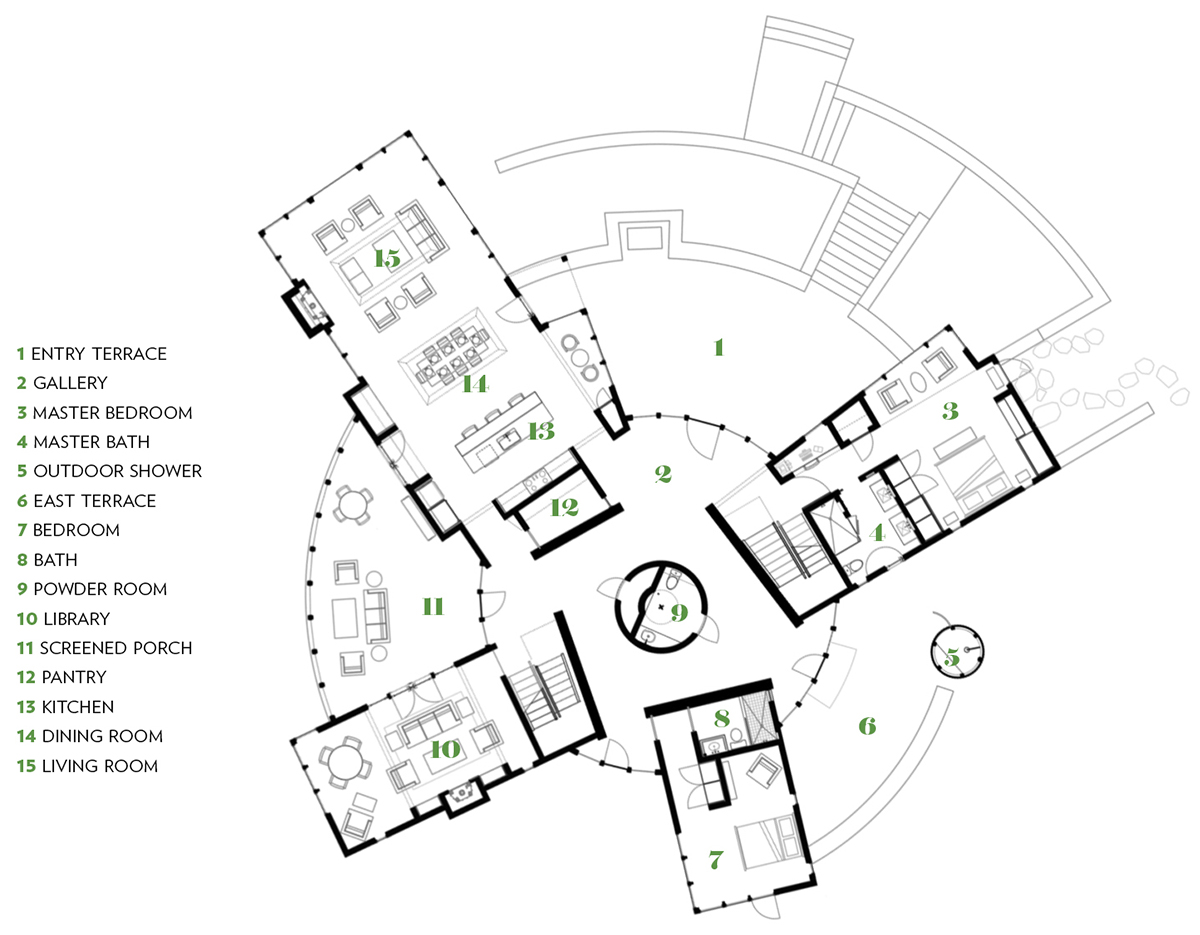 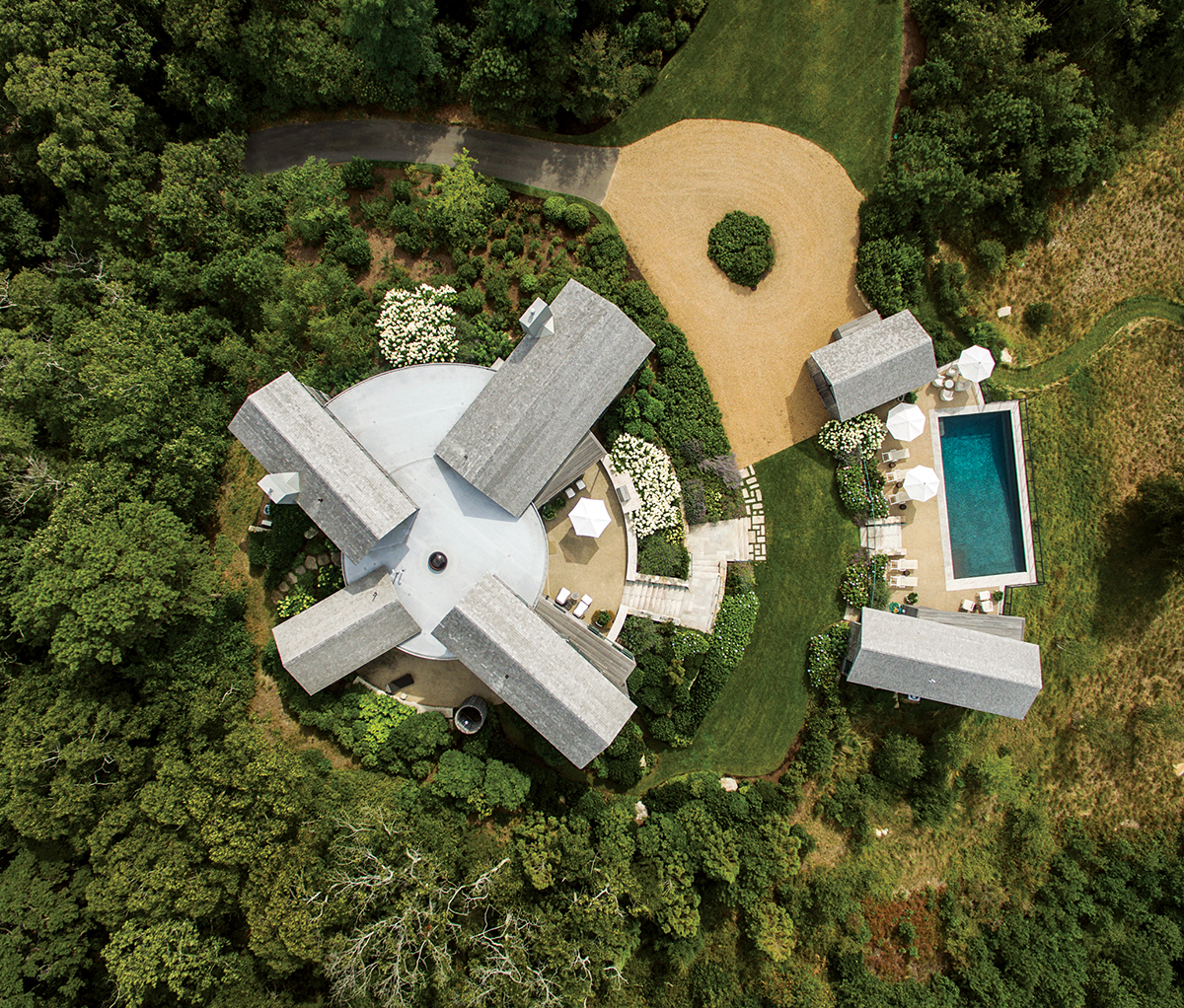 A gunite pool is the perfect addition to this Vineyard home’s well-manicured grounds. / Photograph by Bob O’Connor 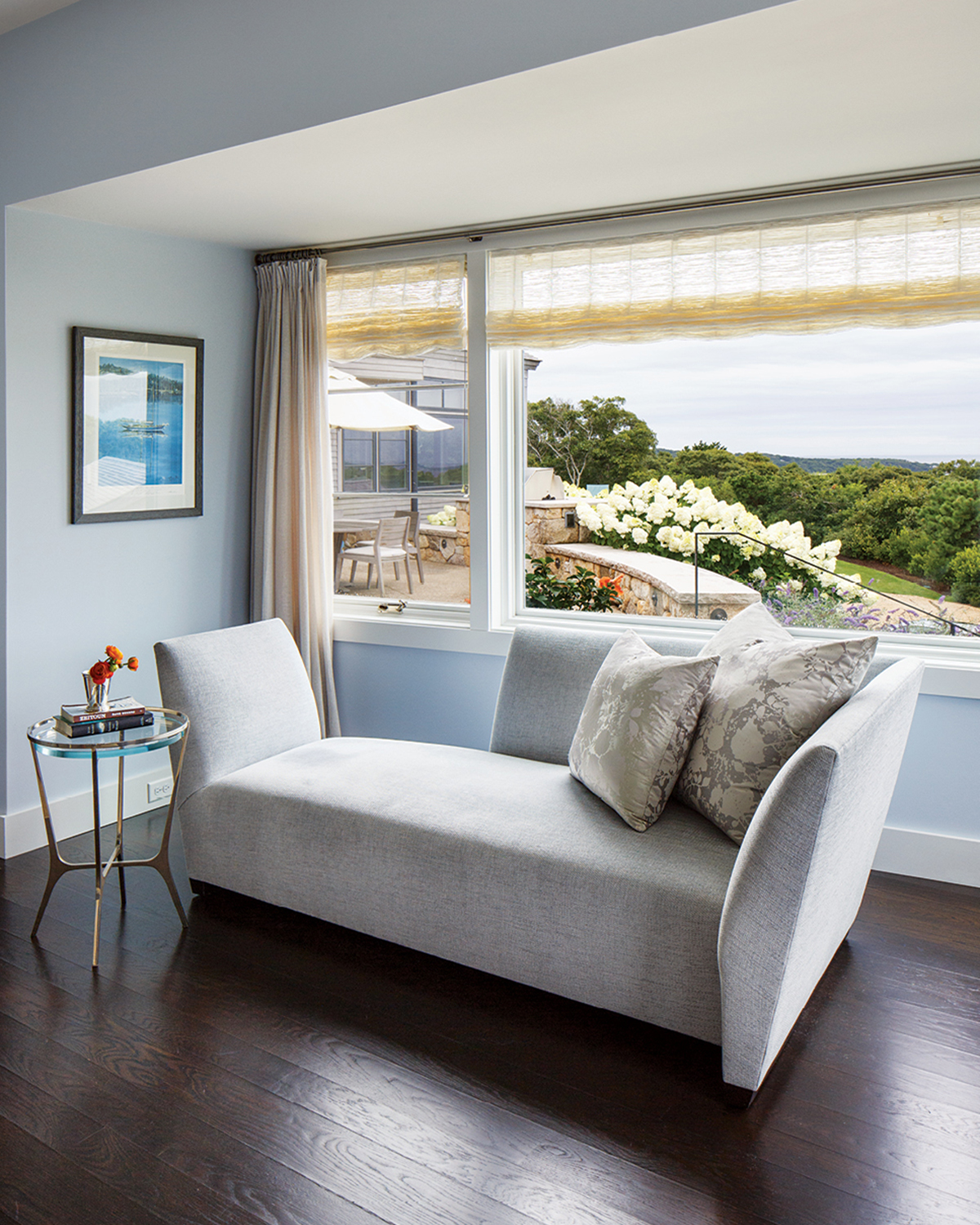 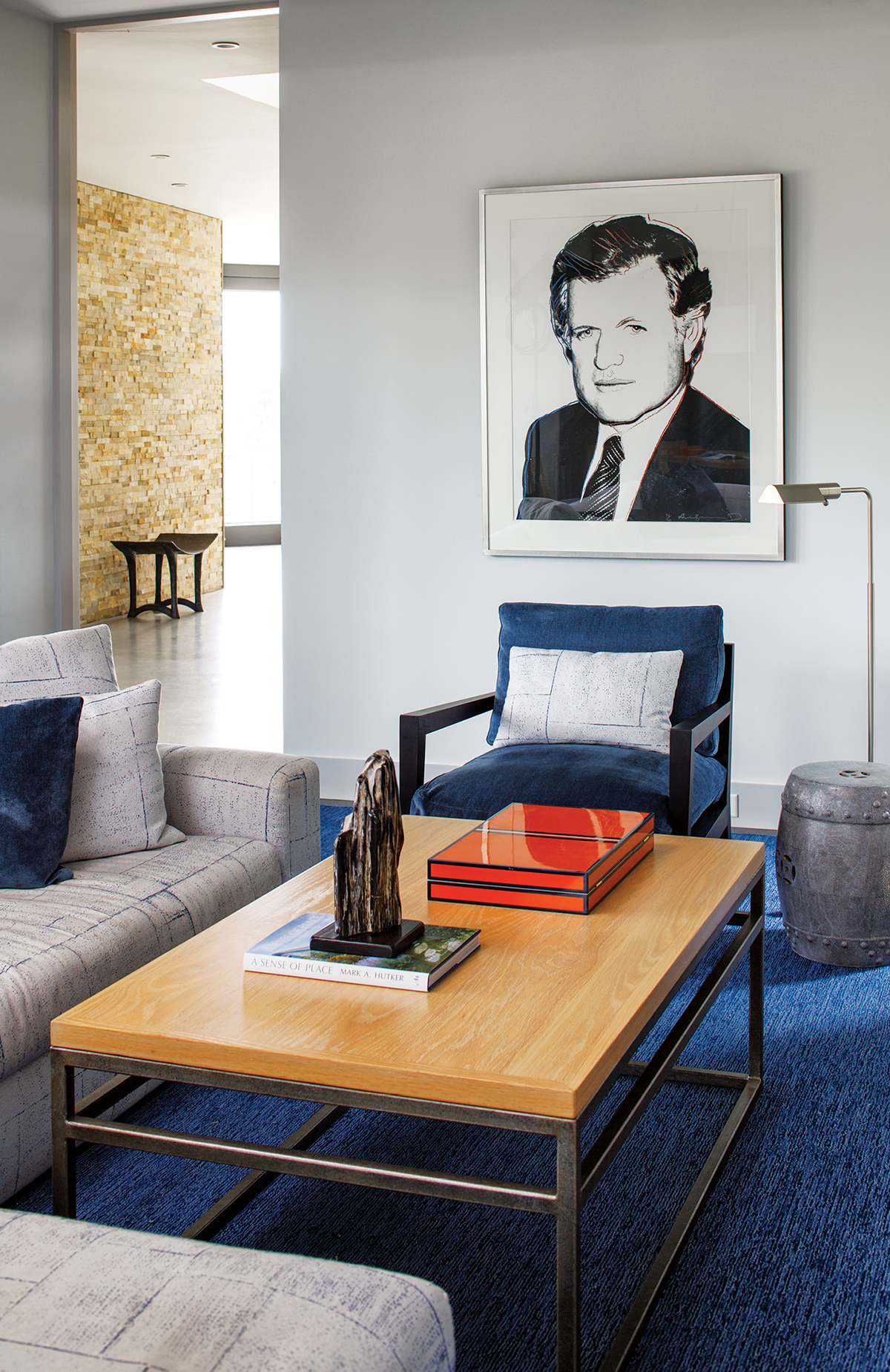 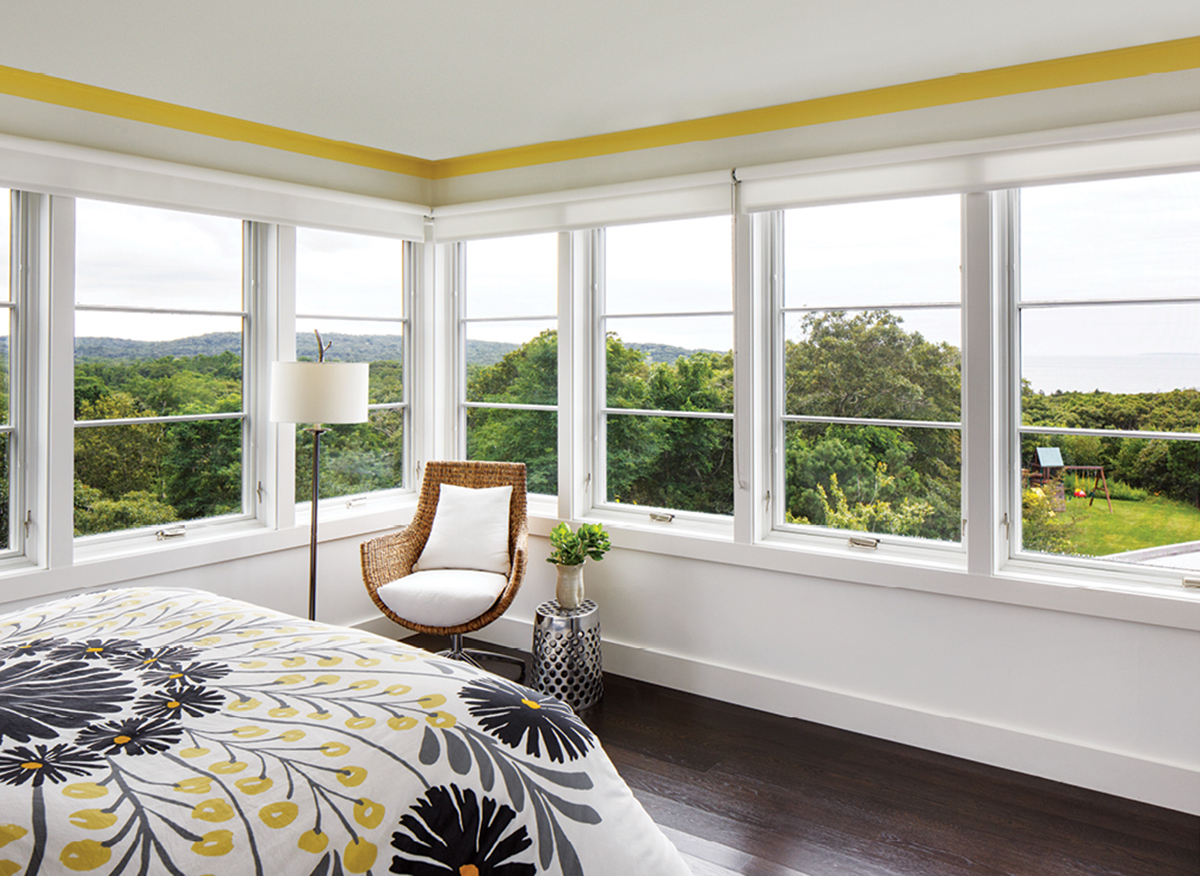 Inland views from a guest room. / Photograph by Bob O’Connor 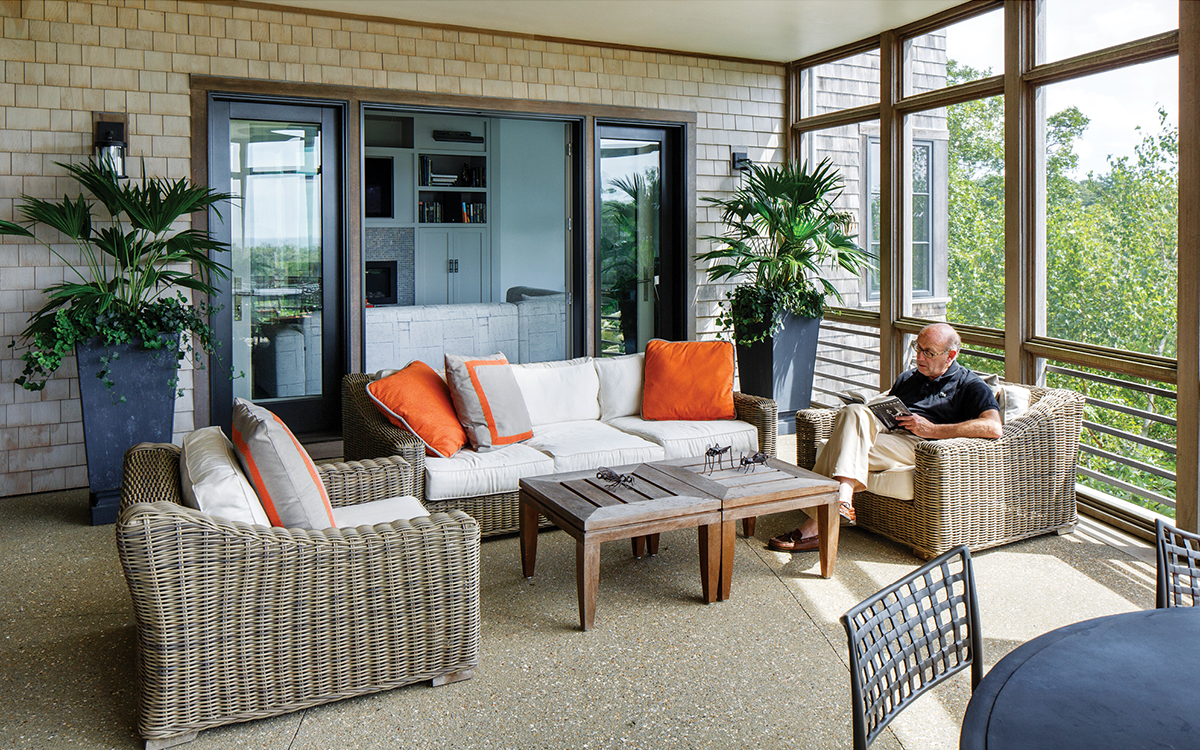 Ken in the screened-in sun porch. / Photograph by Bob O’Connor 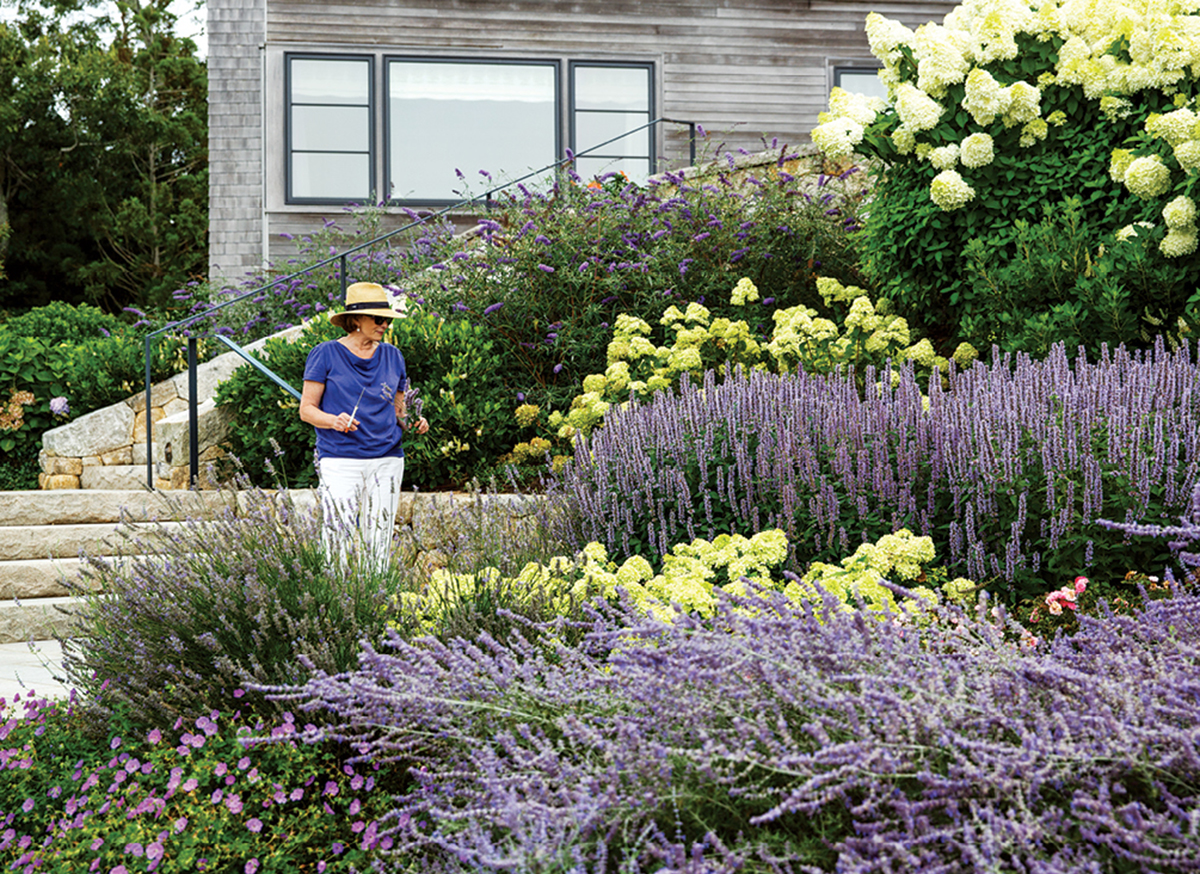 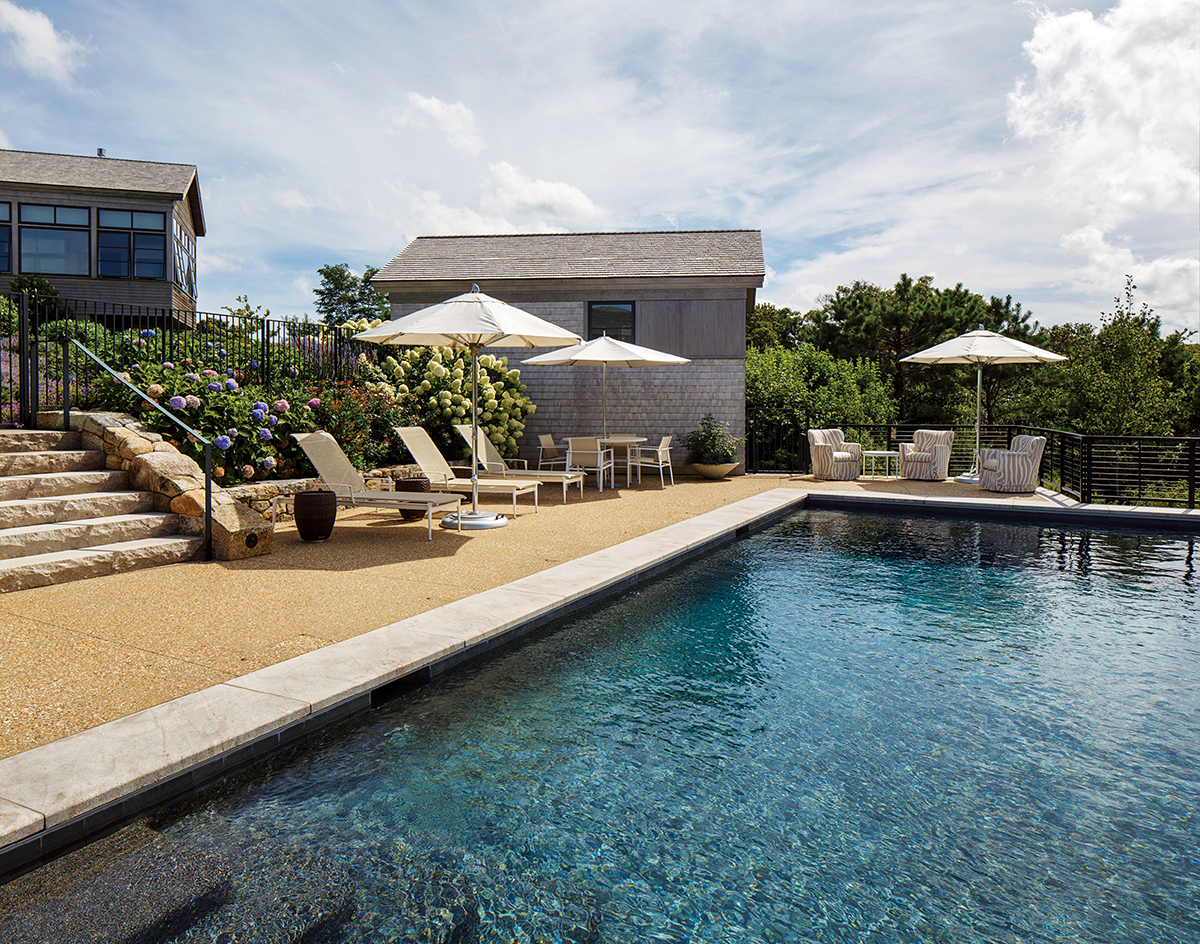 The gunite pool is framed by patio furniture from Brown Jordan, Salvations, and Lee. / Photograph by Bob O’Connor 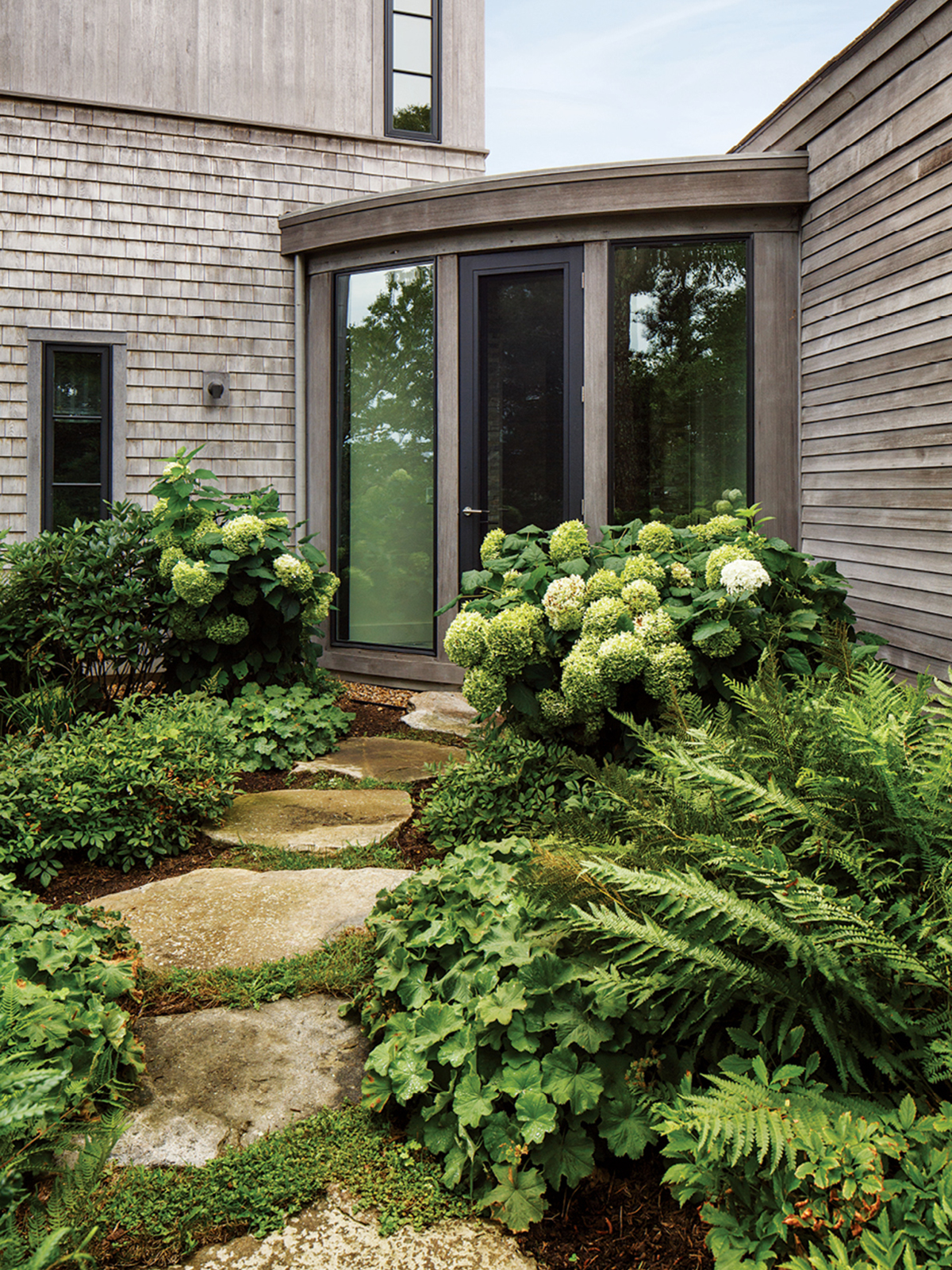 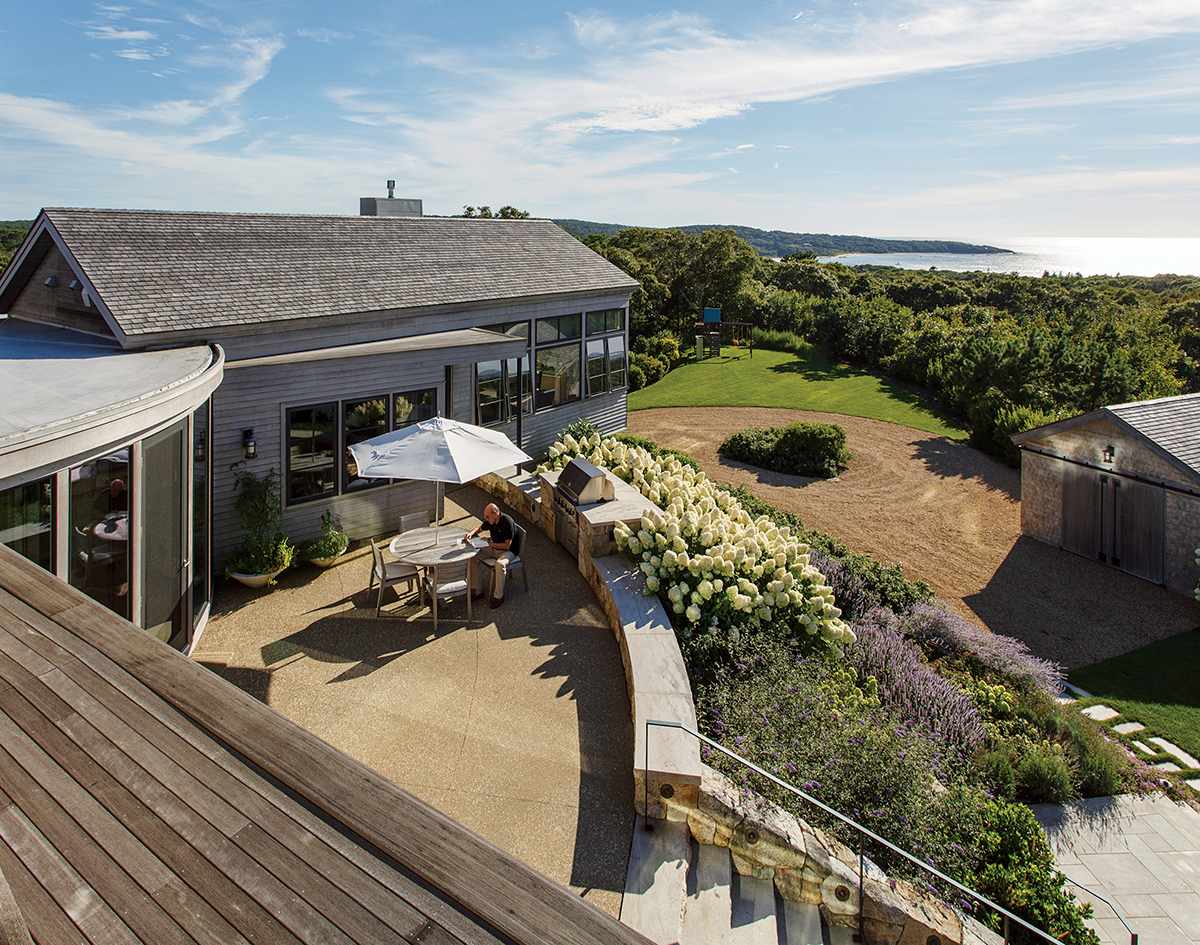 “You don’t find the view until you get up into the house,” Regan says. “Then you turn around and it’s enormous.” / Photograph by Bob O’Connor 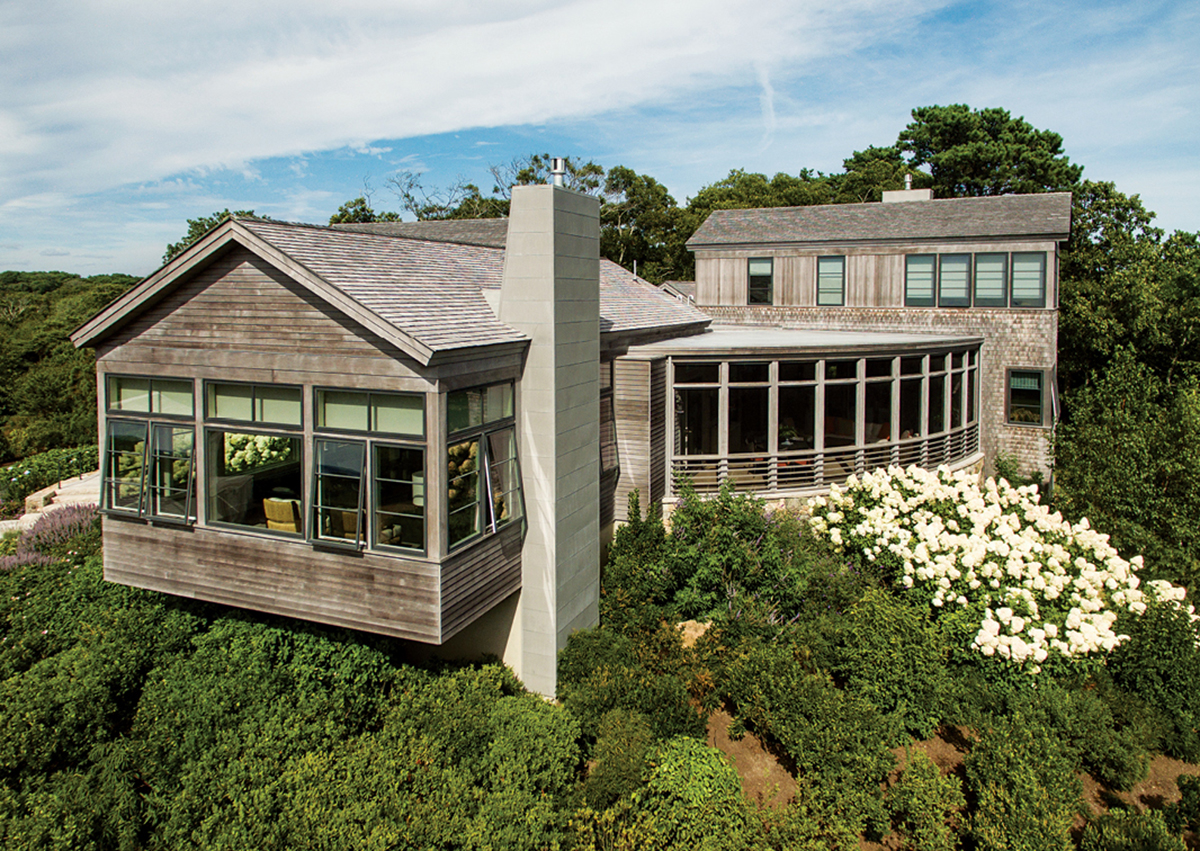 An aerial view of the living room area and porch. / Photograph by Bob O’Connor