Landmark: Motif No. 1 in Rockport

This icon is painted with a broad brush. 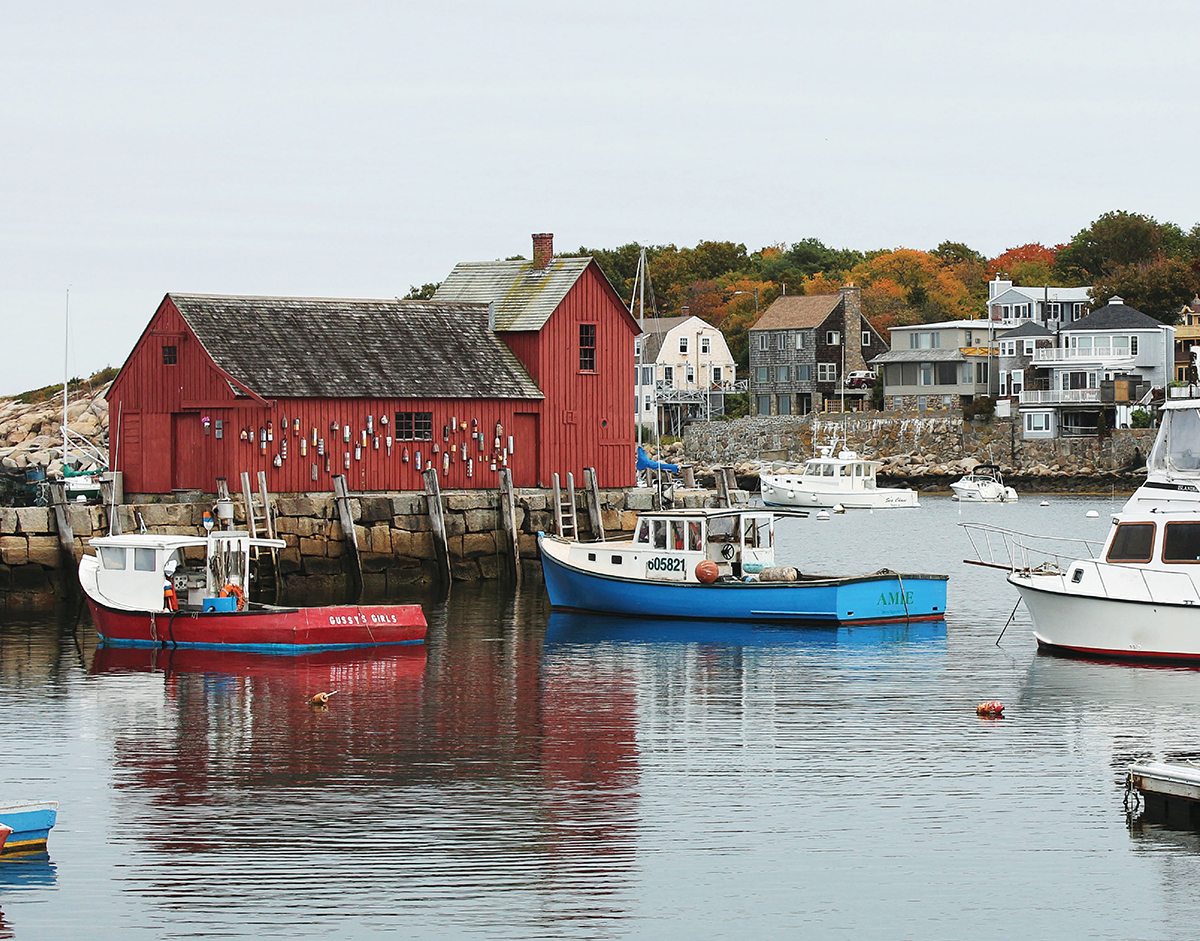 This little red shack on Cape Ann has been widely reproduced—in more ways than one. / Photograph by Robert Linsdell/Flickr

The instantly recognizable fishing shack at the end of Bradley Wharf in Rockport doesn’t claim historical significance. No famous architect built it, nor is it any special feat of engineering. Yet this humble red shack—known as Motif No. 1—is thought to be the most-painted building in the world.

Erected in the 1880s as a utilitarian shed, the simple 1,008-square-foot wooden structure served as a storage space for lobstermen and fishermen. On the first floor, seafarers stocked their bait, lines, and other supplies, and mended their nets. A fish broker’s office occupied the partial second story above.

But the mundane post-and-beam fishing shack became something more when it caught the eye of painters in Cape Ann’s burgeoning artists’ colony. Starting in the 1920s, plein air artists were drawn to the shabby wooden hut. Amateurs and masters created their own fishing-shack masterpieces—much to the vexation of a local art teacher named Lester Hornby.

A painter who summered in Rockport and wintered in Paris, Hornby taught art on both sides of the Atlantic, instructing his pupils to take inspiration from local scenery. He found that his Parisian students tended to tackle a variety of different subjects, or motifs. But in Rockport, there was only one: that red shack. Legend has it that one day, after receiving yet another rendition of the oft-repeated image, a frustrated Hornby snapped: “What? ‘Motif No. 1’ again!” Supposedly, the nickname stuck with the building ever since.

This possibly apocryphal mockery didn’t do much to scale back the floods of fishing-shack art. In fact, it buoyed Motif No. 1 (pronounced “motive” by locals) to new heights of artistic cliché. In the 1930s, one artist even bought the building to use as his personal studio. A few years later, a parade-float likeness of the shack made its way into the Chicago World’s Fair. Its popularity with visitors and locals alike warranted postcards and calendars, in addition to the sea of homemade watercolors.

In light of its ever-growing popularity, Rockport city officials resolved to preserve the inspirational magic of Motif No. 1. In 1945 the town bought the shack and designated it to honor Rockport’s military members. That move cemented the quaint little shack’s status as an indelible symbol of coastal Massachusetts, immortalized on book jackets and posters touting the region. Today, you can step foot inside any gift shop even remotely near Essex County and see the shack plastered on mugs, magnets, and shot glasses. Tourists still flock to see it—despite the fact that there’s nothing terribly remarkable about the building.

“It certainly wasn’t a unique structure,” says L.M. Vincent, author of the 2011 book In Search of Motif No. 1. Then how does he explain its extraordinary fame? “I looked at where the other fish shacks were, and from an artist’s point of view you either didn’t have access, or you didn’t have the background, or you had a big ugly building in the way,” he says. “So that location, just sort of sticking out like a sore red thumb, is really what made it special.”

And even that was a fluke. According to Vincent, the iconic color of this no-frills building wasn’t meant as decoration—rather, it was probably a case of Yankee thrift. “Historically, oils such as linseed could be mixed with pigment derived from clay, flaxseed, cattle blood, or plain old rust (ferrous oxide) to make a reddish color,” he writes. “Iron oxides for red paint were relatively cheap, so a shade of red was the most economical color, if you weren’t picky about the exact hue.”

Decades later, artists continue to render Motif No. 1 on canvasses daily—but while the scene’s rustic charm is as genuine as ever, the landmark itself is not. Yes, the building sitting at the edge of the wharf is a fake. The original Motif No. 1 met its untimely end in the Blizzard of ’78, walloped to red smithereens by wind and waves. Even before the storm died down, Rockport residents gathered near the wharf to pay their respects, vowing to rebuild. By October 1978, they’d finished a perfect replica, dangling buoys and all, based on measurements from the 1938 Historic American Buildings Survey.

Inauthentic as it may be, the little red shack that stands today hasn’t lost a shred of its New England credibility. Indeed, perhaps it’s only fitting that a building that’s been imitated thousands of times on paper should receive its very own reproduction. 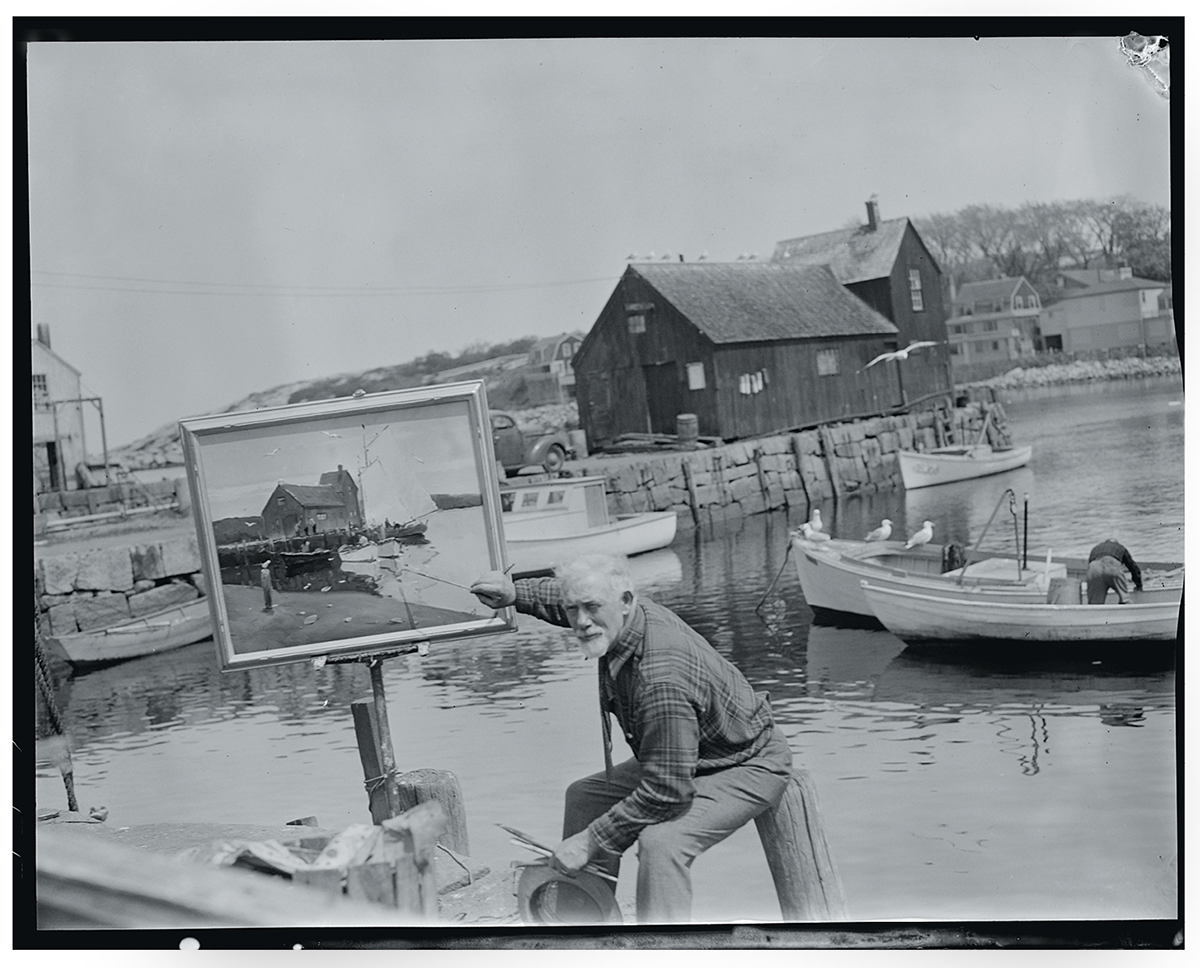