Peter McMahon and the Save of the Century

The founding director of the Cape Cod Modern House Trust—a nonprofit that preserves and repurposes endangered houses on the Cape—discusses the organization’s 10-year anniversary, his newest project, and why he’s loved modern architecture since he was a kid. 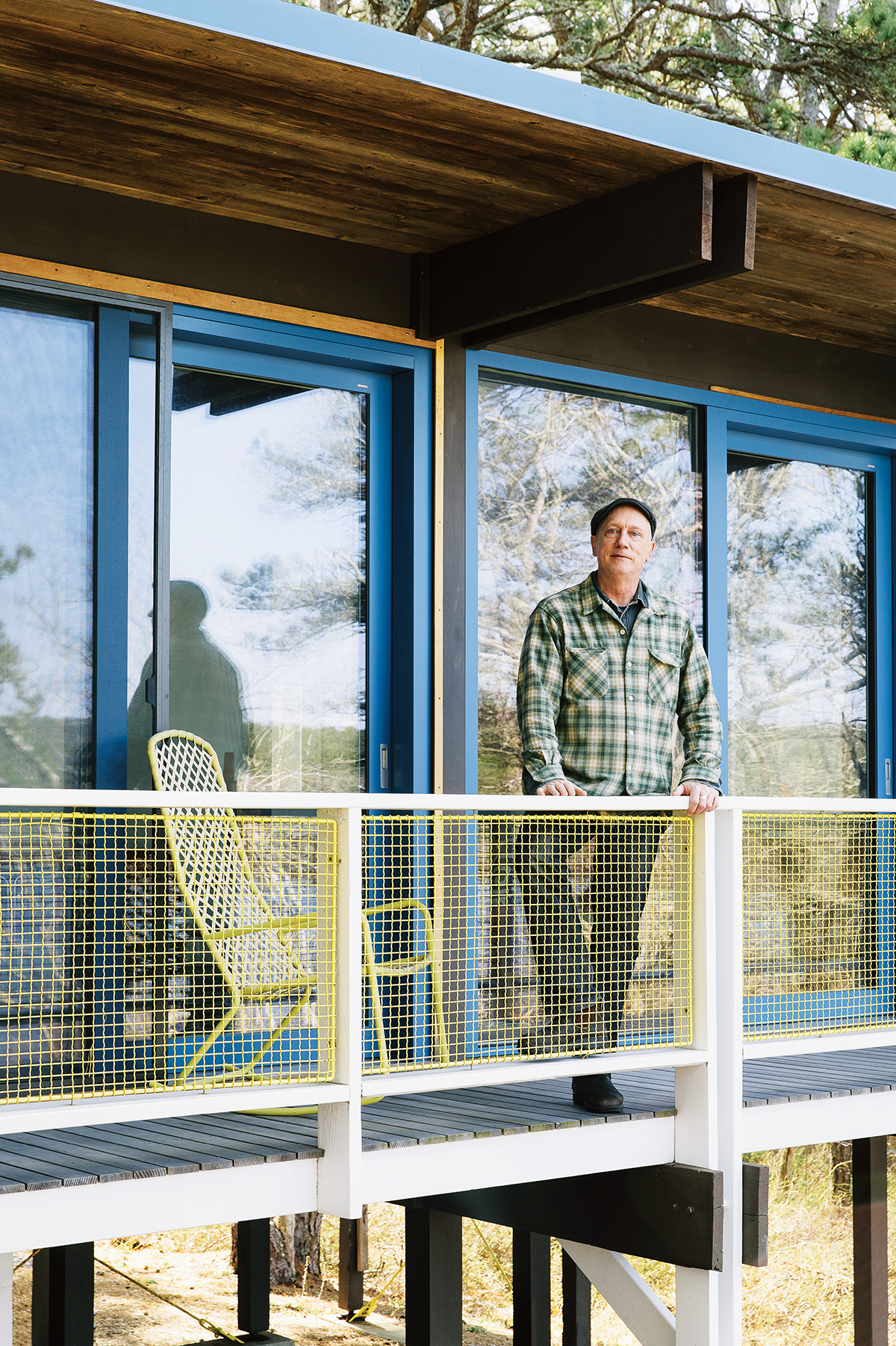 It’s been 10 years since you founded the CCMHT. Congratulations! How did the project begin?

This all grew out of an exhibit that I co-curated in 2006 in Provincetown featuring photographs and models of the modern mid-20th-century houses on the Outer Cape. I did a lot of research in those early years collecting oral histories and locating the children or grandchildren of the original architects and clients, many of whom are still around. I built up a really large body of research.

How did the National Park Service end up owning all these midcentury homes?

The legislation to create the Cape Cod National Seashore was introduced by senators John F. Kennedy and Leverett Saltonstall in 1959. Many landowners were very much against the creation of the park because it was going to stop them from developing, so they built many homes on the land between ’59 and ’61. In 1961, the legislation passed and froze all construction within the boundaries of the National Seashore. Existing homeowners were generally given 25 years to live in their houses and then had to vacate. The NPS was supposed to demolish all those structures, but didn’t. Now, many of them have hung around long enough to become historic.

And when did you come into the picture?

The NPS was starting to realize that its 20th-century buildings were of architectural significance, but had no line of funding to do anything with them. It initiated a National Register context study for the modern houses on the Cape. Some of the homes were abandoned; some were being used for seasonal staff. In 2007 we offered to partner with the NPS to restore the homes, one by one. It’s been a kind of a collaboration between us, the park, and the town of Wellfleet, which has been the major funder through the Community Preservation Act.

What was the first home you restored?

We applied to the NPS to lease the Kugel/Gips house, which we finally got in 2010.

How does the CCMHT use the restored homes?

We’ve done a lot of collaborations with Harvard—and some with RISD and MIT—where students come out to experience the buildings in different ways. We also started our artist and scholar residency program, which has resulted in a symposium, and we did an affordable-housing competition a few years ago. This year, we’re using outside curators to come and select artists who are then paired with scientists doing research in the park. Their art-science collaborations will be presented next fall.

You said you lease the homes. What’s the structure of the deal with the NPS?

We’re kind of like renters who stay in the house in the warm seasons in exchange for a partially tax-deductible donation. So we pay rent to the NPS and we raise the money to restore the buildings, which can be quite expensive. Some of these buildings have been empty since the ’90s.

Then you wrote a book, co-authored with Christine Cipriani?

I developed the idea with publisher Diana Murphy, at Metropolis, who owned a modern house in Wellfleet. We’d been talking about doing a book for years. The CCMHT had to fundraise and restore two more houses while doing the book. We created drawings of eight of the houses and reshot all the buildings. We also found archival photographs—it’s a serious endeavor to collect that much information, most of which had never really been written about.

What’s the backstory of your newest home, the Kohlberg house?

As part of the national registry renovation, the park established an A list and a B list. Basically, anything that’s not on the A or B list is slated to be demolished because it’s a ranch house or shack or something with little significance. Of the seven A-list houses, we have three of them. Two of them are probably too far gone to restore, and two of them are being used by the NPS. I believe four total are now on the national registry, including the three that we have. The Kohlberg house was on the B list because it’s of the period and interesting, but not designed by anybody famous.

Who was the designer of Kohlberg?

A guy named Luther Crowell. He was a local designer/builder who came from a very old ship captain family on the Cape—the Crowells go back to the Mayflower. Luther used to own a lot of South Wellfleet, either by inheriting or acquiring it. During the Great Depression, land was literally $20 per acre on the Outer Cape because nobody wanted it. Ironically, the more out-of-the-way and unspoiled it was, the cheaper it was, because it was considered a godforsaken wilderness. Crowell developed a lot of these areas. He would sell you the land, design the building, and build it.

What’s the history of the home’s owner?

Lawrence Kohlberg was a very prominent psychologist at Harvard who developed the theory of the moral development of children. He was one of many Harvard and MIT academics who lived in modern houses built here around that time. Kohlberg built this house in 1961 and lived there until sometime in the ’90s. Then he had to relinquish it. The park was supposed to demolish it, but they never did. So that’s good for us.

So this is a house you’ve wanted to restore for a while?

Yeah, I really liked the Kohlberg house. It’s in a spectacular location, on top of a dune looking out to the Atlantic. It also has a small A-frame guest house that was built in the ’70s.

The Kohlberg house was in pretty good shape. Anything we can restore and keep, we do, and we replace everything else with something that’s as close to the original as we can find. We also try to improve the performance of the building in ways that are hard to see. About five years ago the roof started leaking. That’s when things start to go downhill very fast. There’s a lot of rot inside. In this situation we take the building down to the framing and insulate it as well as we can in ways that don’t show. In some cases we replace the plate glass with double glazing; sometimes we don’t. We generally replace the doors and windows, which is tricky to do in a way that’s not really perceptible. In this case the siding is completely shot—dried up, curled out, and blackened. We’ll replace the asphalt roof with a rubber roof because you can’t see it from anywhere and it performs much better. We have one problem: The interior paneling is this kind of lauan plywood with grooves that does not exist anymore as a material. You can’t buy it.

You spent your summers on the Cape as a kid?

When I was 10 my parents hired Charlie Zehnder, one of the modern architects here, to do a house for us. So I grew up here in a modern house in the summer, which was my introduction to the whole subject. I used to wander around and find these real modern houses, and they always made sense to me. I always was very attracted to them. My mother was an art historian, and she was very into Danish modern. She went to Denmark—this is in the late ’60s—and brought back all this Danish furniture. She shopped at Design Research when it first opened.

And then you became an architect?

I worked as an architect in New York until about 2002, when I came up to do some work on the family house and decided to stay. I’ve always been interested in the modern houses here, and I knew where some of them were, and I knew that [modernist architect] Marcel Breuer lived here. Nobody really had a firm idea on how many modern houses there were. I don’t think anybody realized that there were so many. A lot of them are in remote places that you would never come across unless you went all the way down this certain dirt road.

In your book you talk about people at town meetings who would say these buildings aren’t historic and shouldn’t get funding.

There was resistance in the beginning. Now practically everybody in town has read the book and everyone in town knows someone who was connected to that story—whether as a carpenter banging nails for one of these people when they were young, they have some connection. It’s a small town, you know. At this point I think many are very proud of the story. It puts Wellfleet on the map in a different way. It’s not just oysters and old buildings. People are taking better care of their modern houses, too.

What’s the next step for the CCMHT? Do you have ambitions to grow the organization?

We’re small and we have a very specific mission. That’s part of our identity—we don’t want to be all things to all people. Aside from the physical preservation of the buildings, we’re just homing in on this one strand of history and are trying to promote scholarship and new creative thinking that relates to it.

The architects who built these houses believed in making the world better through design. What do you see in the future for CCMHT projects?