The head of Chelsea-based Erik Rueda Design Lab is on a mission to create a coworking space for craftspeople—and establish a new design district in the process. 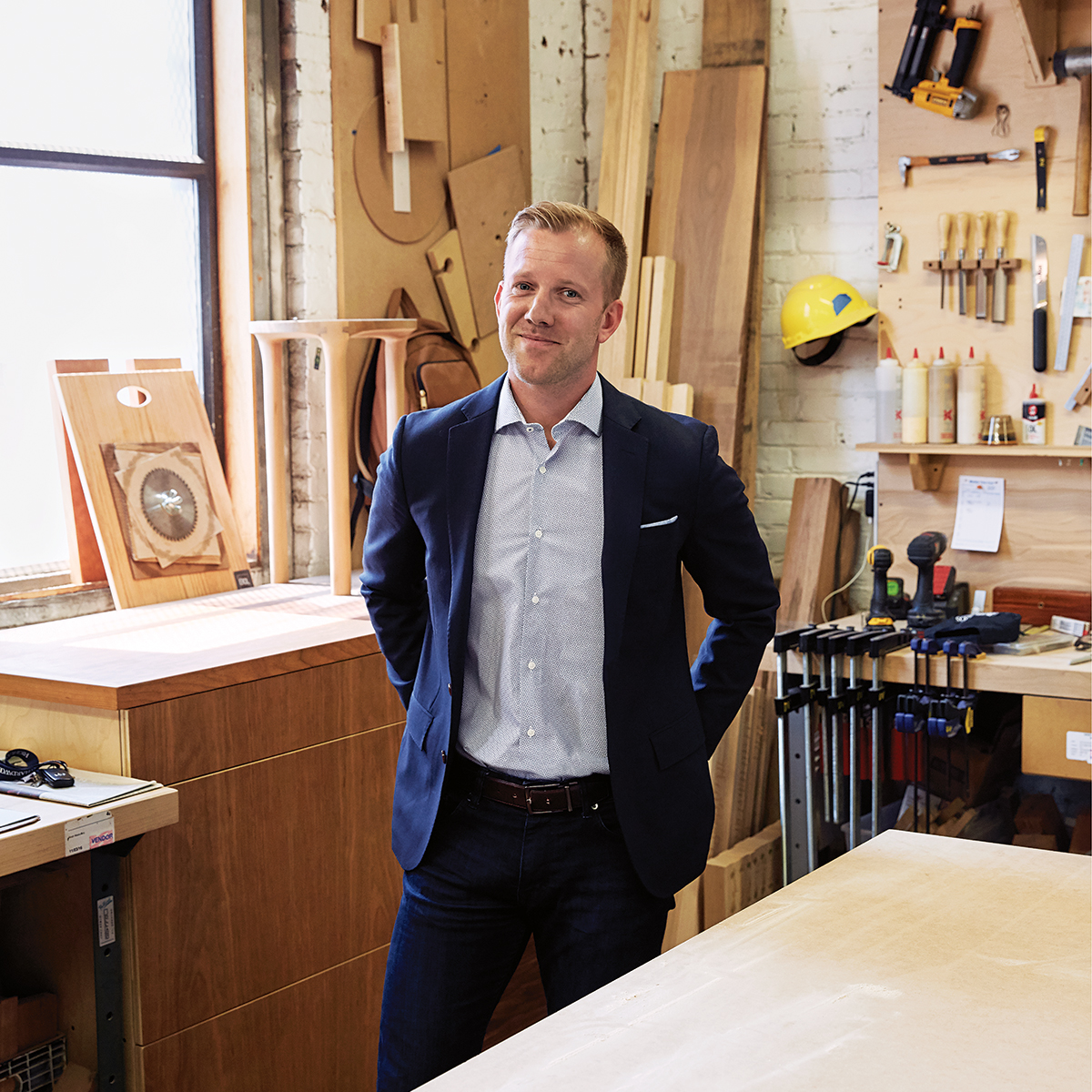 The three words that guide us are “imagine, design, craft.” The most distilled version of our mission statement is to take ideas, dreams, and concepts, design them, and actually make them, all under one roof. I call us “the tailors of the built world.” We’re passionate about craft. There are other companies that do fine millwork or furniture, but we’re really trying to tackle bigger-scale projects.

We do about 75 to 80 percent commercial work in hospitality, and we build a lot of conference tables, reception desks, and media wells. It’s all custom, mostly tech- and AV-integrated stuff. We have come to really specialize in the blending of disciplines: craftsmanship and making really cool, sexy stuff with a very strong command of AV integration.

Two years ago, we moved into a much bigger building in Chelsea, right across the harbor. We’ve grown to a 14-person company, and we work with everyone from interior designers in Boston that still ask us to make one-off dining room tables all the way up to [the media company] News Corp, our biggest client.

We’ve been doubling in size every year for the last four years. And with the demand, we may triple this year. We see the demand for custom-made products increasing significantly, and a departure from the off-the-shelf stuff. People want something that’s more carefully made, tailored to them, and not just as cheap as possible. Americans generally have a really obsessive consumerist attitude, like, “We’re just going to buy a bunch of IKEA stuff, and if it breaks in a year, just throw it away and buy more.” I don’t believe in that.

Where does that belief come from?

My background is in high-end residential construction. I cut my teeth building large custom homes for Filias Construction, in Manchester-by-the-Sea, while I was in college and then moved to Boston to study architecture at Northeastern. At the same time, I had been asked to do a handful of commissioned pieces, so I was doing design-builds while I was going to school. I did the five-year program at NU, and during that time I started picking up more clients and doing furniture and millwork for interior designers in Boston.

I was also in ROTC, so I was commissioned as an officer in the Army after finishing school and went away on active duty for six months. When I came back, I opened my first real shop. I found a totally rundown, nearly burned-out warehouse building off Mass. Ave. in Newmarket Square. We had about a 2,500-square-foot shop, and I started doing custom millwork, furniture, cabinetry, and a whole host of things for some clients I’d worked with before. That was back in 2013, when I rebranded the company as Erik Rueda Design Lab.

What brought you to Chelsea?

The building, really. I looked at a bunch of different locations, and that building had a tremendous amount of charm and character. It used to be the New England Sculpture Service, where all of the Make Way for Ducklings statues were made. A number of other statues in Boston were cast there, too. The older gentleman who owned that company wanted to retire and was selling the building, so we were able to purchase it. Actually, the foundry is still in operation under a different name, and it’s a partner company of ours. It’s kind of cool. We have a legitimate guild over there.

I had the idea to create a design-focused coworking space called Foundry 214. So you know WeWork or the Cambridge Innovation Center? Coworking spaces like these have been in huge demand because people with small companies can’t afford to spend tons of money setting up their own office, so they rent space. It makes a lot of sense. My intention was to do that in the design realm. That’s what we’re doing with the partner companies that are already in the building.

So, for example, there are three companies currently in the space in addition to us. One is a tech- and AV-integration company that we work with on a lot of our commercial projects. There’s the sculpture studio upstairs, which creates almost all of the metalwork in our projects. So we design it, we walk across the hallway, and we’re like, “Hey, what’s this going to cost? How can we build it?” and then they craft it for us, and it’s all in the same building. Then there’s a boutique, high-end residential furniture company called Glos + Grain. There’s really a significant volume of work available.

I mean, half of the sculpture foundry’s annual revenue comes from us. Over the last two years, the AV integrators have gotten well into seven figures because of work acquired through us. That’s a key part of the recipe, in my mind.

You reserved the space above the Design Lab for Foundry 214. Is it a separate venture?

It’s related, but yes. Companies like WeWork don’t care who you are or what you do as long as you pay, whereas I deliberately want to curate who we bring into Foundry 214 to tie together the collaborative nature of good design, environments, and products with revenue generation. We’re actively looking for interior designers, architects, project managers, and other people who can share projects and clients.

I’m trying to be careful about who we bring in because I want it to be what the Design Center should have been.

What’s wrong with the Design Center?

Where should I start? Geographically, it’s really undesirable. It’s difficult to get to, and it was built to be sort of retail-focused, so you don’t get any pedestrian traffic. You have to drive there. There is public transportation, but it’s a pain in the butt. I think they missed an opportunity there, and the evidence, in my mind, is what’s moving into the building now. It’s not more high-end, design-y retail-type outlets. It’s large offices, and the building is being converted to office space. Reebok is moving there. Elkus Manfredi moved their offices there and took a huge chunk of the seventh floor. I don’t think the idea of the Design Center being this outlet for different textiles and cool stuff—a place where you put together a project from all these different vendors—works. And when I’ve been there during the day, there’s almost no one there.

So you want Chelsea to become the new design district?

We’ve called Chelsea “the Brooklyn of Boston,” because that’s what we think Chelsea has the potential to be. Brooklyn has a mix of trendy living and workshop spaces, and there’s an opportunity for entrepreneurs and people with ideas to carve out areas for themselves to do their thing. That doesn’t exist in the Seaport because it’s so expensive. I don’t think that sort of small-scale economic and cultural vitality can exist in the Seaport as it is now. Look at the players that are moving in there: PricewaterhouseCoopers, John Hancock, large architecture firms. It’s just astronomically expensive, so where do you go? Areas like Dorchester, Roxbury, and Roslindale are heavily residential, and there’s not a lot of industrial loft workspace, so what’s left? Chelsea or Everett, if you want to be close to Boston.

Are there people who’d be against this idea?

Yes, the current residents. There are always people who are resistant to change, who feel threatened by young entrepreneurs, artists, or other people doing things that are out of the norm for that area. I think that’s pretty obvious in places like Dorchester and Southie, where gentrification causes a bit of a rub with people who’ve lived there for a long time.

But I think reinvigorating the Boston design and cultural community with a bit more diversity would be good. People from various backgrounds have different perspectives and styles, which can lead to a real richness in the area’s built fabric. Boston tends to be understated and reserved in its architectural expression, its design, and its fashion. It’s a good thing to inject new people with ideas into a space to create and do fun, innovative things, and break the mold of the rigorous brownstones.

Yeah, Boston is kind of reserved. I do think that the Boston skyline generally is very vanilla. The Renzo Piano addition to the Isabella Stewart Gardner Museum is pretty cool, but that’s still kind of understated. The ICA was cool, and it’s still kind of cool. But everything else is developer-driven. One of the most beautiful office buildings in Boston is the Hancock Tower. It’s iconic and has simple designs that make it just gorgeous.

It’s a start. The recipe is working. We’ve had most of the large architecture firms in Boston come to our space, have lunch with us, tour us. The reception has been exceptional. Everybody loves the building. We’ve cultivated good relationships with these firms, and part of that is telling them our story and how we started and where we are now. It has generated immediate work for not only us, but our partner companies. The dollars are there. The contacts are coming in. The recipe works. Now we’re looking to grow it.