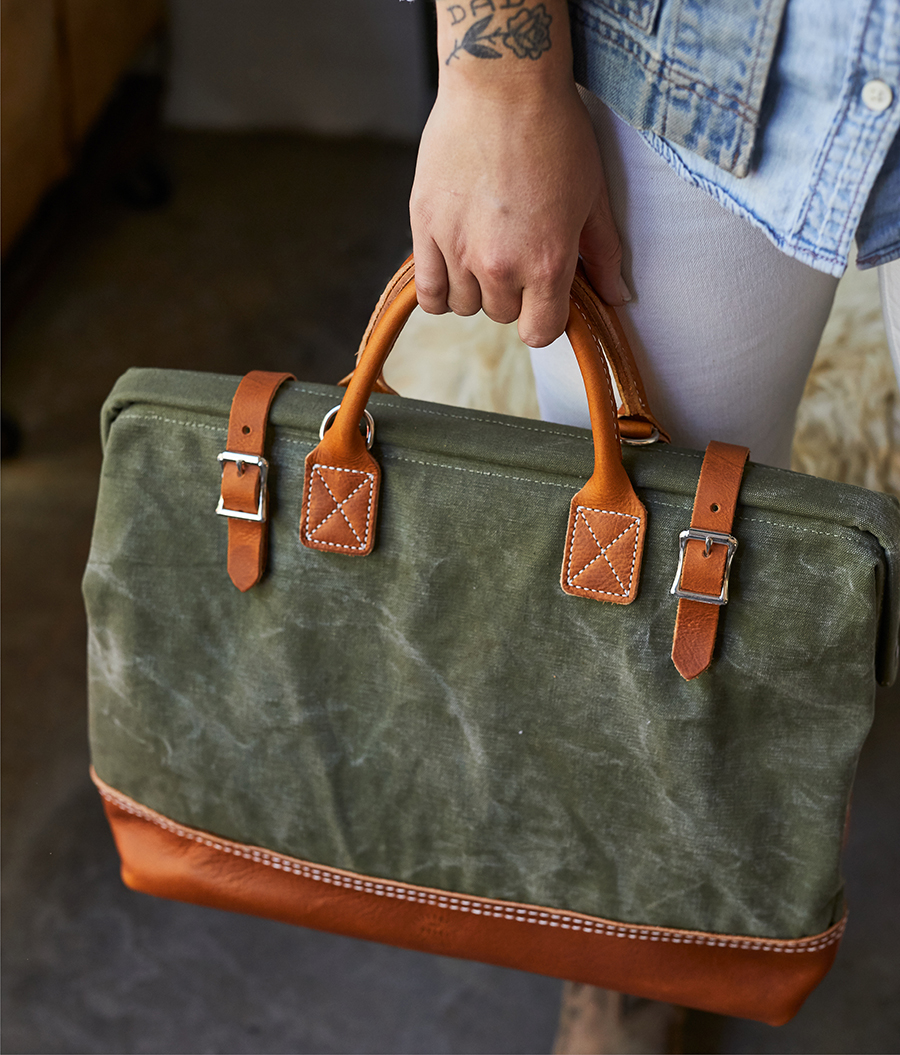 Sitting behind a wooden table in her Somerville studio, Alice Saunders reaches for a small metal tool resting a few inches from her tattooed hands. She slides it across a strip of brown leather, deftly cutting into the hide. Her movements are precise. Quick. Soon, Saunders will transform the beveled leather into a shoulder strap for one of her signature pieces: a carryall, made with salvaged canvas. It may come as no surprise to learn that the designer graduated from Northeastern with a degree in history: It shows in the vintage textiles she sources from decades-old World War II duffels, grain sacks, hammocks, and other handpicked items to create new totes and satchels—each imbued with a little piece of the past.

“I’ve always been really fascinated by military history, and using this old canvas has been a way for me to tap into my nerdy side,” says Saunders, whose father and grandfathers served in the armed forces. “I feel honored that I get to take that and turn it into something new.”

Yet a career in bag making wasn’t always Saunders’s plan. When she launched her company Forestbound in 2007, the New Hampshire native thought of it as more of a side project—a source of extra income she could focus on when not working her day jobs in farming and gardening. She’d honed her sewing skills at an early age, having grown up experimenting with her mother’s portable Singer sewing machine and teaching herself to make the bags and pouches that she’d later sell at local markets. But after a couple of years of juggling her fledgling operation and other gigs, Saunders was ready to commit herself fully to Forestbound.

“I decided I would just go for it,” she says. “When do you get an opportunity to dedicate yourself fully to a business you’ve created? I thought, why not just [do] it.”

Ten years later, it seems Saunders’s gamble has paid off. Her handcrafted bags (priced from $99 to $345) have garnered a loyal following from customers throughout New England. They’ve also attracted attention from big-name retailers such as Urban Outfitters and Anthropologie, who’ve teamed up with Saunders on special bags. Her pieces, it seems, are flying off the wooden shelves of her airy Union Square workspace just about as fast as she (with some help from an offsite manufacturing team in Los Angeles) can stitch them together.

For Saunders, the creative process begins and ends with the canvas. When she’s not poring over Craigslist ads to find textiles, she’s scouring local flea markets and estate sales, waiting for something to catch her eye: a duffel bag with a soldier’s handwritten name on it, a Marine Corps banner with drawings of palm trees. Once she’s found the right material, Saunders soaks it in OxiClean, removing any stains and debris before the fabric is hang-dried and ironed. Next, she chooses the parts of the canvas she wants to highlight before carefully cutting them out and piecing them together with her vintage sewing machine.

While creating satchels from reclaimed textiles remains “at the heart of her business,” Saunders says, lately she’s found even greater success with a different product: the “Escape” bag. Although the carryall is made from brand-new canvas, it still reflects the designer’s passion for history: The bag, adorned with the word “Escape” in bold type, is a play on an old tool bag Saunders found years ago at a flea market. “I’d always wanted to make my own version of it,” she says. “And now it’s just taken over my life.”

No kidding. Since the bag’s release, Forestbound’s profile has skyrocketed, creating a slew of new design opportunities for Saunders. Keds, for example, approached the designer about teaming up on a line of New England–inspired shoes, which debuted in October 2017. More important, though, Saunders’s customer base has gone international, expanding to include buyers in countries such as Australia, Singapore, and Japan.

“My business is such a part of me, even more so than the product itself. I feel like I’ve connected with a lot of my customers on a personal level,” says Saunders, who loves including handwritten notes to patrons with each bag she sells. “A lot of my customers are invested in me, as well as Forestbound bags, and that has been so special.” 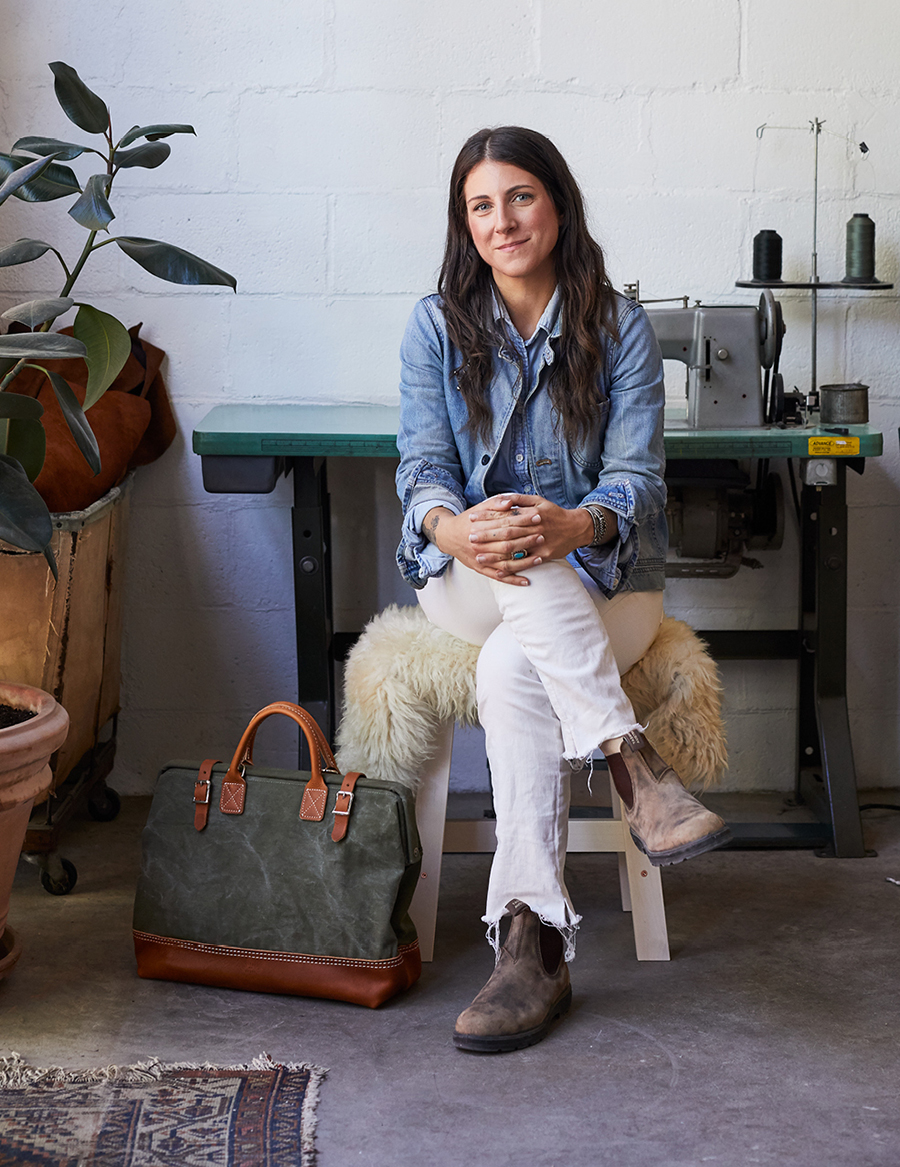 Saunders in her Somerville studio. / Photograph by Pat Piasecki 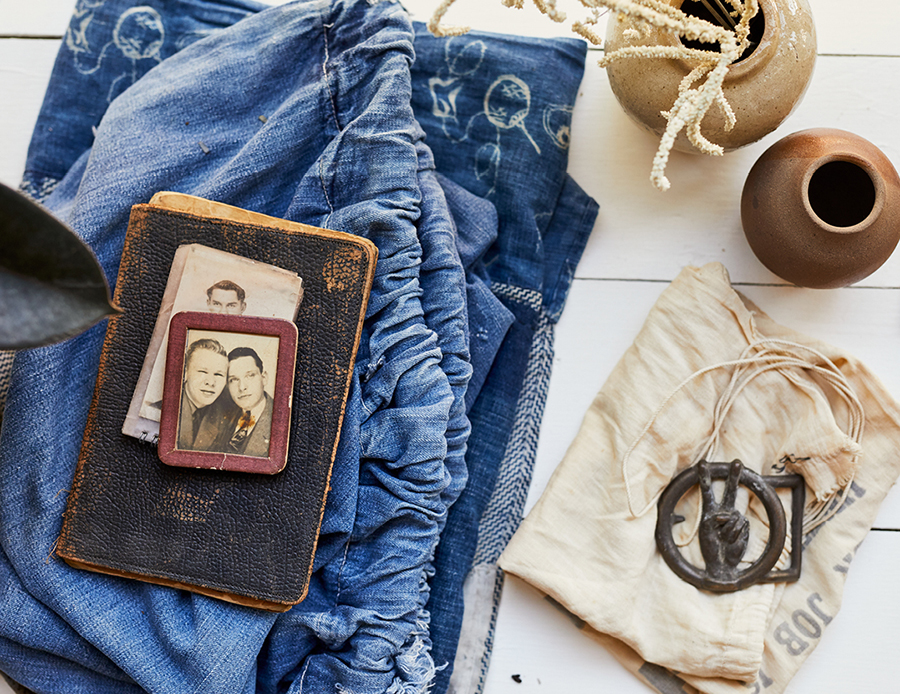 The designer often finds old photos in the duffels she picks up at flea markets. “I always save them as inspiration and reminders of the people who once owned and used the materials I incorporate into my bags,” she says. / Photograph by Pat Piasecki 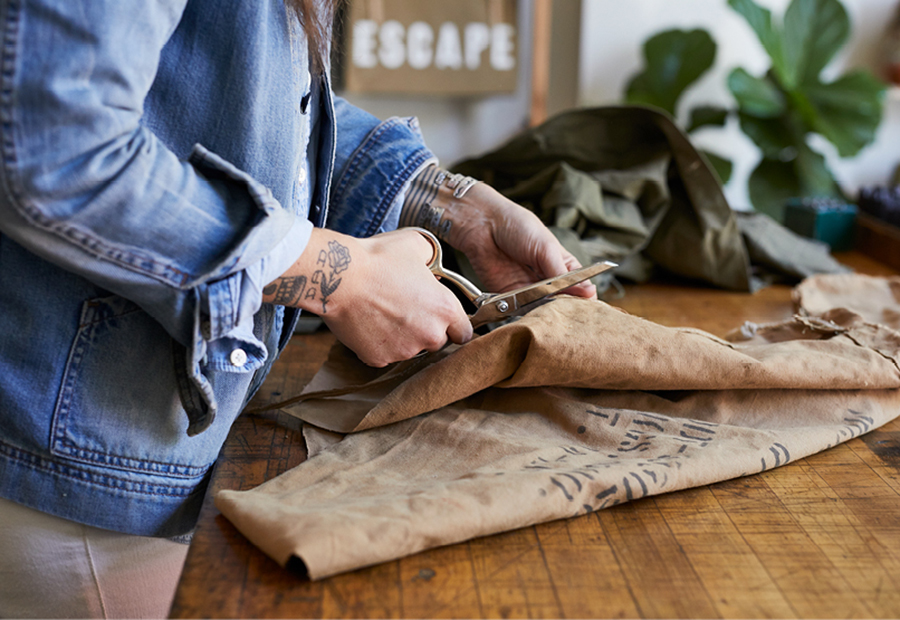 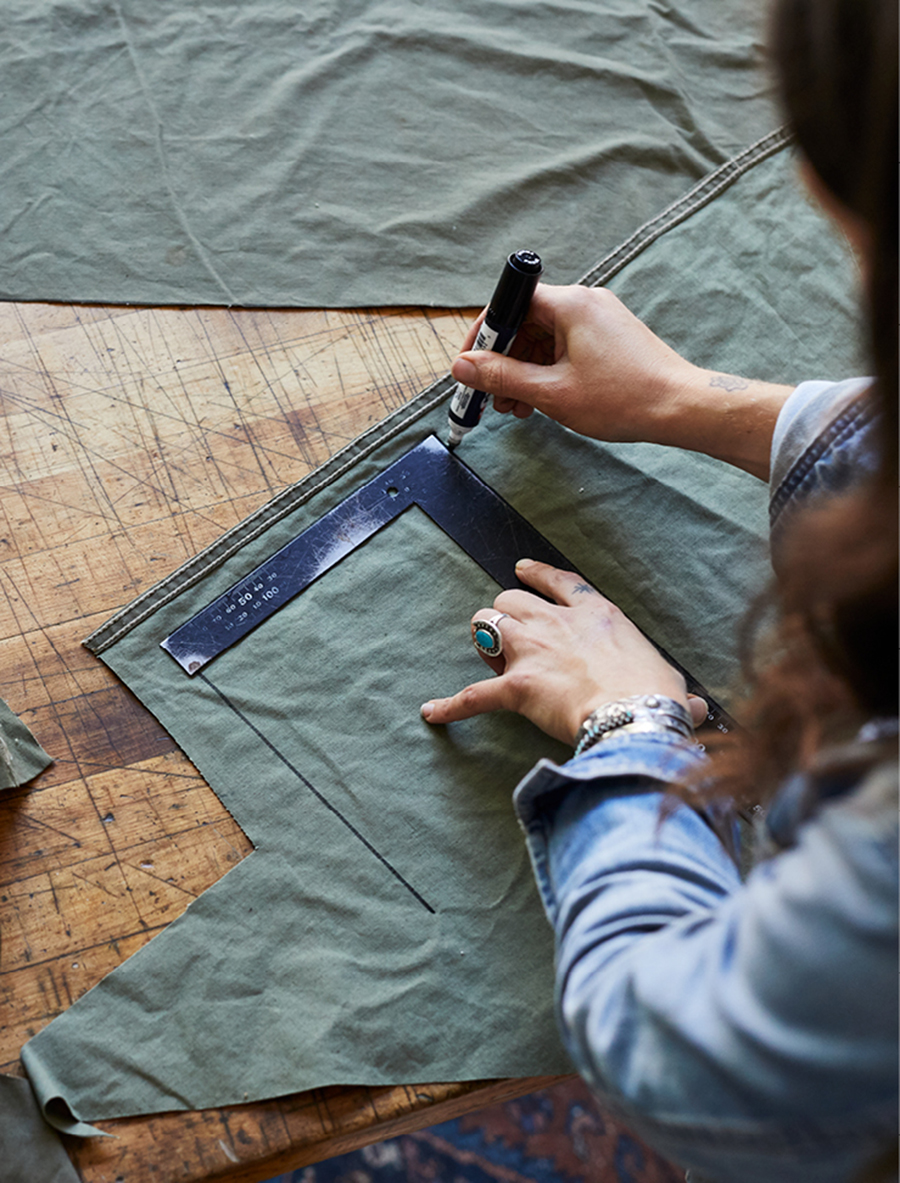 Using a square ruler, Saunders traces a piece of canvas that she’ll later use as a patch for a new bag. / Photograph by Pat Piasecki 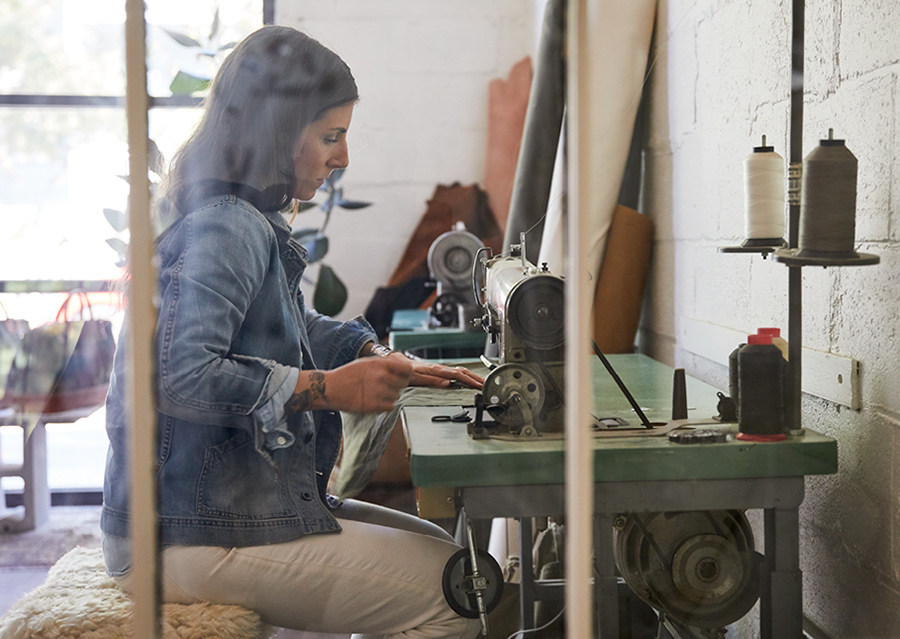 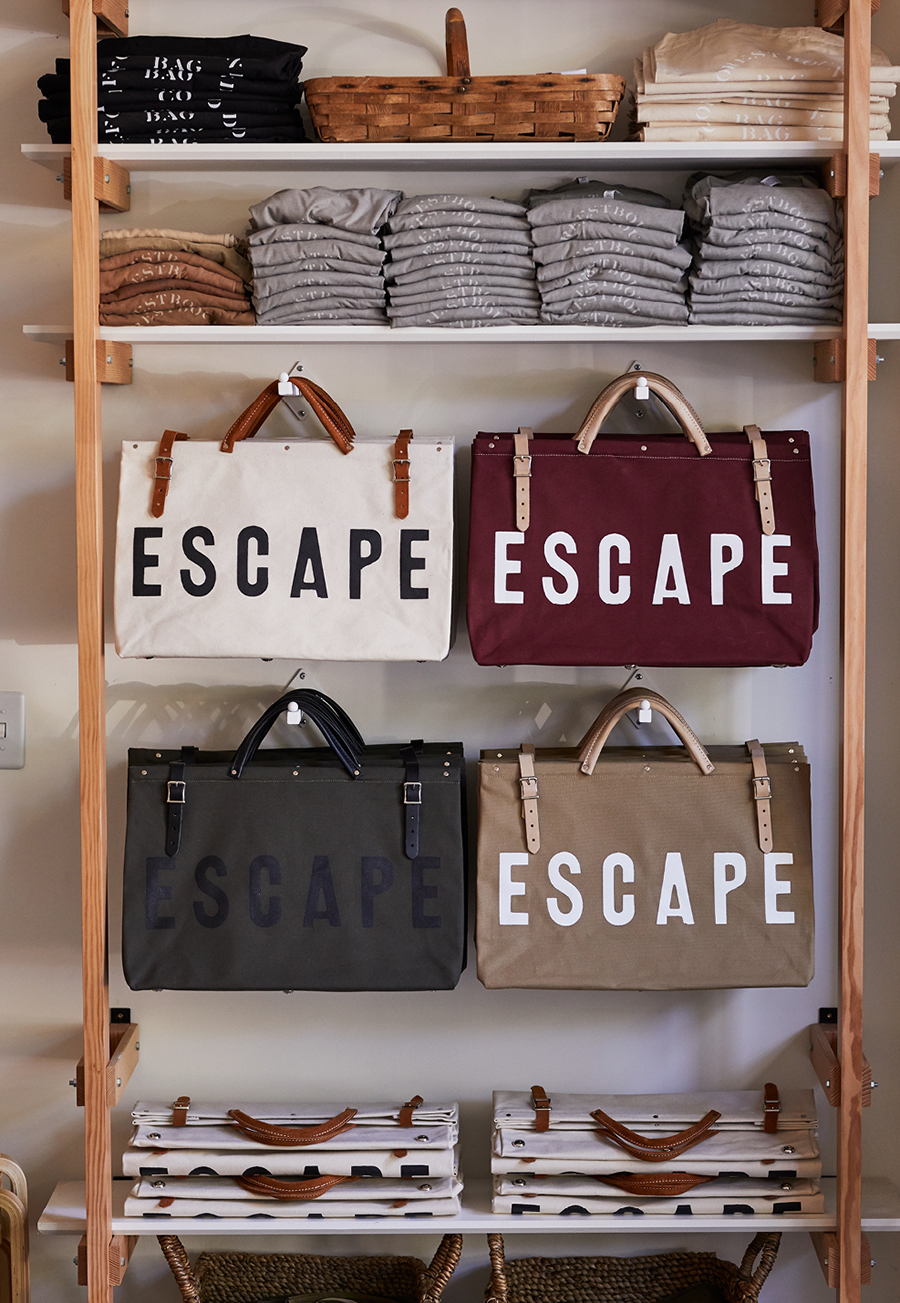 The designer says the success of the “Escape” bag has taken her business to the next level. “I love the feelings [the bag] evokes,” she adds. / Photograph by Pat Piasecki 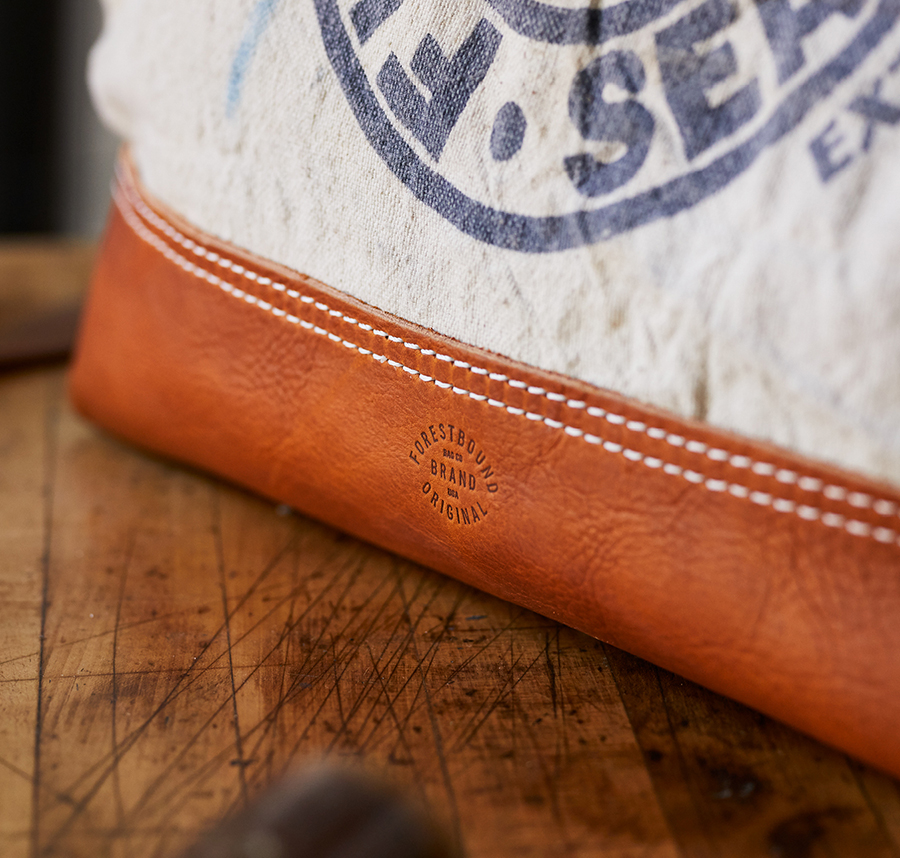 Saunders outfits many of her creations with a sturdy leather base. / Photograph by Pat Piasecki 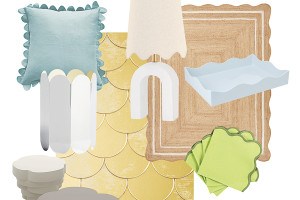