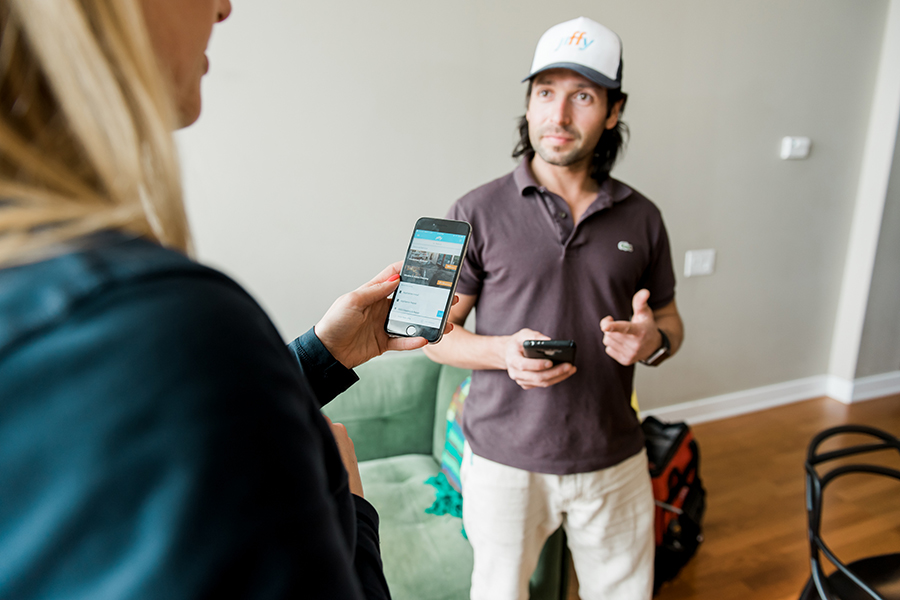 If there’s anything more annoying than a leaky sink, it’s trying to find a professional to fix it. From running into schedule conflicts to scouring the web for reviews, it’s easy to find yourself drowning in a logistical nightmare. But a Toronto-based home repair app is setting out to end frantic Yelping once and for all. Called Jiffy, the app just launched in Boston, and could make calling the plumber a thing of the past.

“If you’re renovating your whole house, you do a lot of research yourself to read many reviews, to contact multiple contractors, and to go back and forth talking about quotes and schedules,” Shupak says. “And there are solutions for that—online, friends and family—but for smaller jobs around the house where you just need an electrician to install a light fixture…those jobs are hard to find somebody who’s available.”

Here’s where Jiffy comes in. Instead of taking the time to find a business willing to complete a small job, the app does it for you in a matter of seconds, connecting you with a professional within a day.

“So you’re in X part of the city, you want someone to swap out a toilet, and you want it done today,” Shupak says. “You’ll send that out and then our algorithm will determine—based on the pro’s ratings, their skills, their availability, and whether they’re doing a job nearby—and then we’ll waterfall based on the algorithm who gets the job first.”

Each type of job has a baseline price. Pest control rates, for example, start at $150 for the first incident. Every additional incident is another $150, plus the cost of materials if they’re needed.

A chat function is programmed into the app, allowing homeowners and service professionals to confirm details about the repair. And along with benefitting consumers, Jiffy also allows trades to build their businesses.

“If you think of a world in five years from now where Jiffy has penetrated a city like Boston, the idea is that one plumber can do, instead of two or three jobs in a day, he’s able to do five or six or seven jobs because they’re all aggregated to our system and funneled to him or her…in a really small geographic square,” Shupak says.

In order to work with Jiffy, service professionals must be employed by a licensed company that has insurance. Some companies working with Jiffy could have multiple trucks on the ground, while others could be owner-operator, one-stop shops.

Jiffy’s most unique function is Jiffy Flash, a feature akin to Uber Pool. With a live map, an active blog, and a to-do list, Jiffy Flash allows customers to see if there is already a pro nearby. If so, the service professional gets two jobs in one trip, and the consumer gets a cost reduction of around $25 to $50.

Since Jiffy launched in Toronto in 2015, it’s booked more than 30,000 jobs. According to Shupak, Jiffy is ready to dive into Boston’s market.

“The goal is to get into as many homes as possible and to help as many trades as possible to build their business in the easiest way,” Shupak says. “The idea is that the homeowner is doing as little as possible to make sure their home is taken care of efficiently.”