By Madeline Bilis and Andrea Timpano· 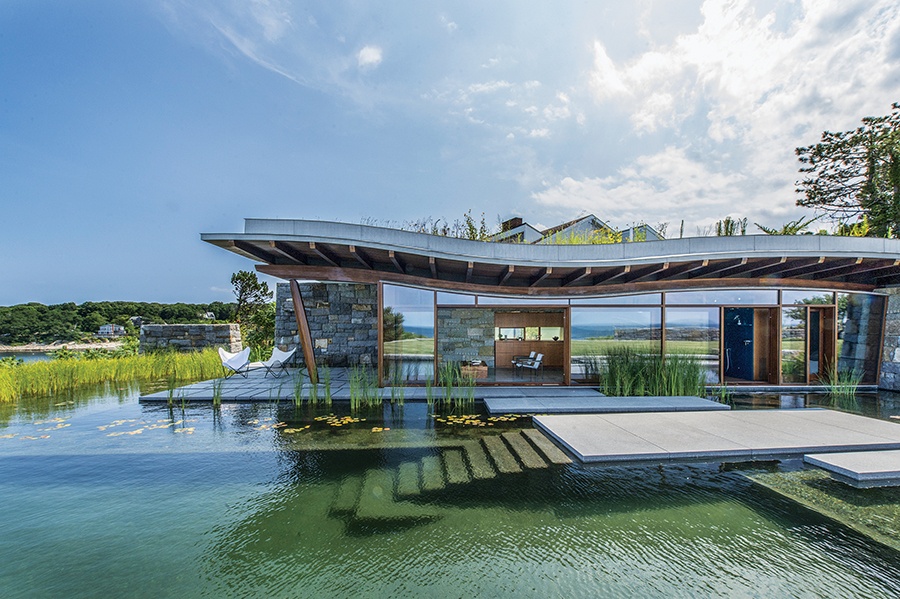 Some things in life are simply worth waiting for. In Ralph Taylor’s case, it was this oceanfront property: a stunning 1.4-acre plot on Cape Ann, where he’d been house hunting for six years. After purchasing the land, the philanthropist enlisted Boston-based Butz + Klug Architecture to dream up a low-key summer hangout for the panoramic spot, and they eventually settled on a naturally filtering pool and a pool house.

Because the local conservation commission would never allow a chlorinated pool so close to the sea, the firm carved a chemical-free one into the landscape instead. Its shape takes cues from the adjacent trapezoidal lawn, which the team left open to maximize 180-degree views of the Atlantic. The seemingly never-ending basin blends with the ocean, thanks to an infinity edge that hovers 50 feet above the shoreline. Grasses in the water add the oxygen needed to filter the pool, while a black interior heats it by attracting sunlight.

A series of stone platforms leads from the lawn to the pool house, designed to mimic what architect Jeff Klug calls “a natural undulation of the earth.” On one side, walls of glass with magnetic screens open to the ocean. A floor-to-ceiling window in the shower area opens, too, ushering in sea breezes while a retractable lattice wall creates privacy. Above, the house’s green roof—planted with native grasses—resembles a wave. “I looked for a gesture that was both reminiscent of land and water,” Klug says. In fact, the pool house comes quite literally from nature, as the granite used to build it was quarried at the site. “It’s designed as something that is contemplative and reflective,” Klug adds. “The outside world is left behind and you’re in another place.” —M.B. 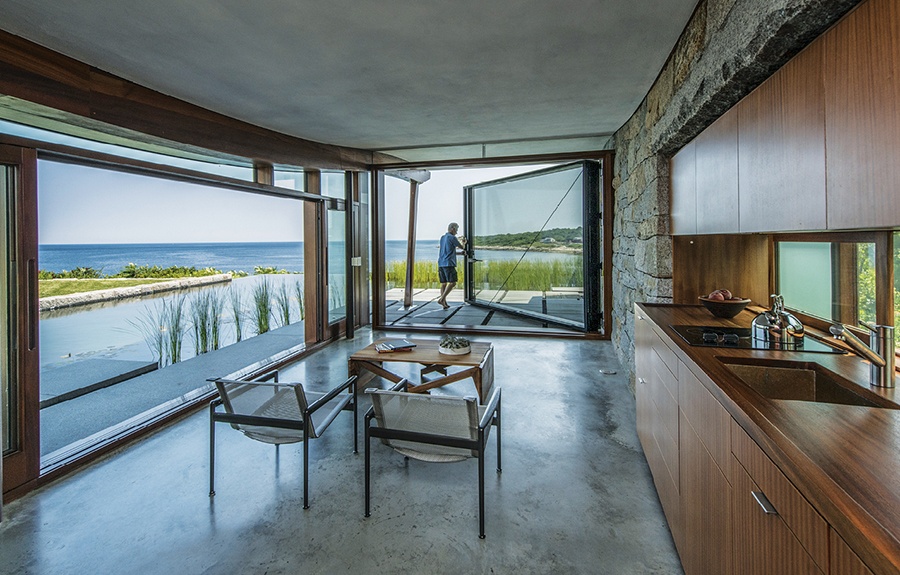 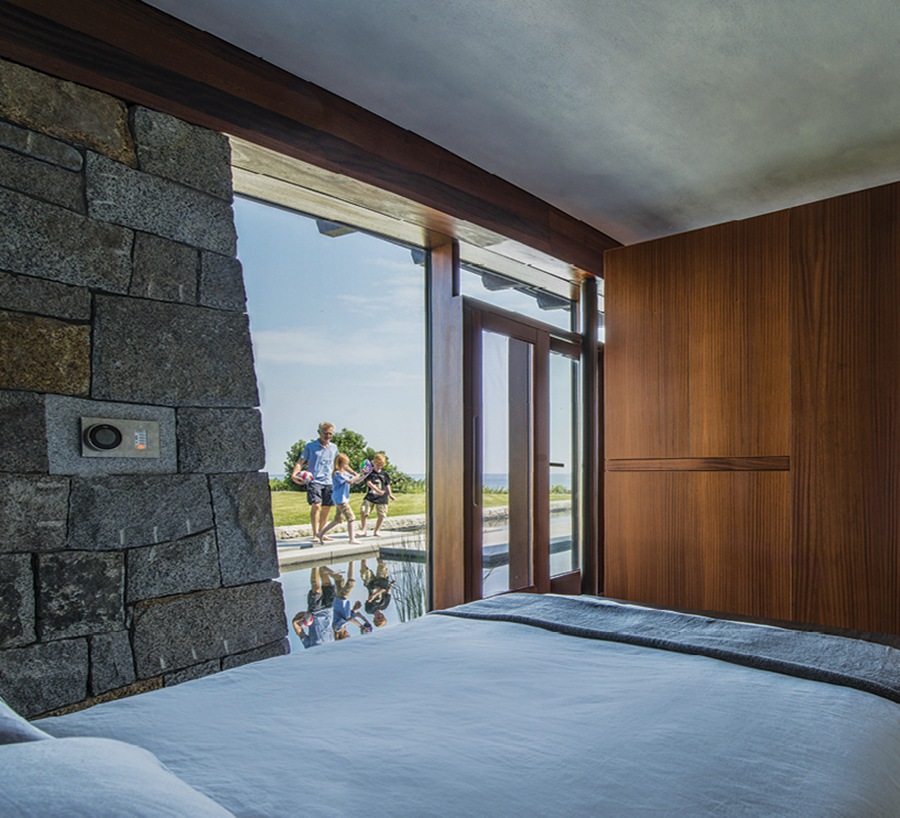 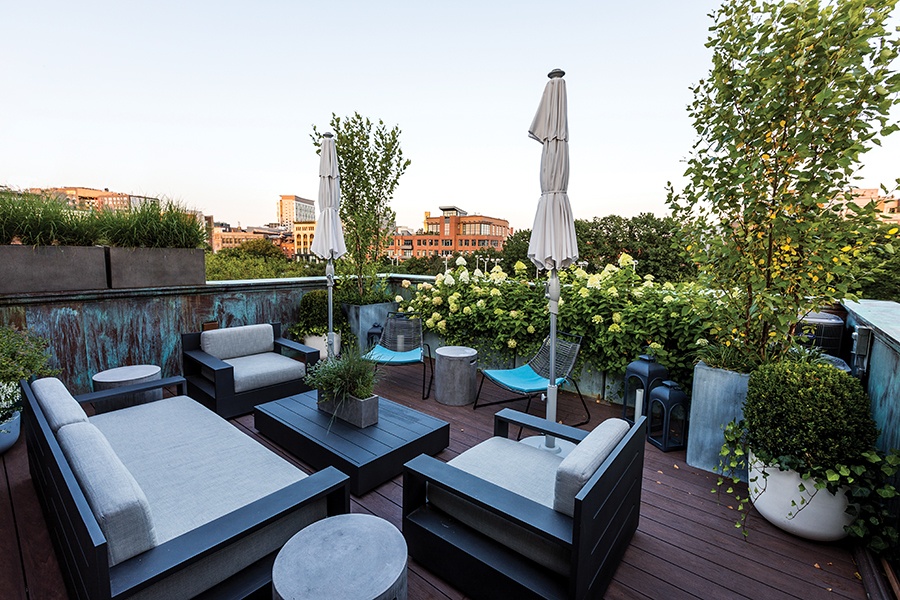 When two empty-nesters decided to trade in their Andover home for a condo in the city, they feared losing precious outdoor space. Those concerns dissipated, however, when the couple bought a gut-renovated townhouse in the South End, complete with an untouched 324-square-foot roof deck off the master bedroom.

Envisioning a couples’ retreat with room for lounging and gardening, the pair hired design-build firm Andover Landscape to transform the blank space. To kick off the renovation, the team—led by John Nardozza and Russell Stott—treated the existing copper-clad parapet with a chemical finish, giving it an oxidized patina that mimics the classic look of neighboring brownstones. They also introduced a series of weathered lead planters filled with hydrangeas, boxwood, and Boston ivy. Layering the planters adds privacy and “softens the surrounding hardscape,” says Nardozza, who also installed birch trees next to them to create a sense of scale. Sleek yet understated furniture from RH and BoConcept keeps the focus on the garden, while the careful placement of each element preserves the deck’s sightlines. 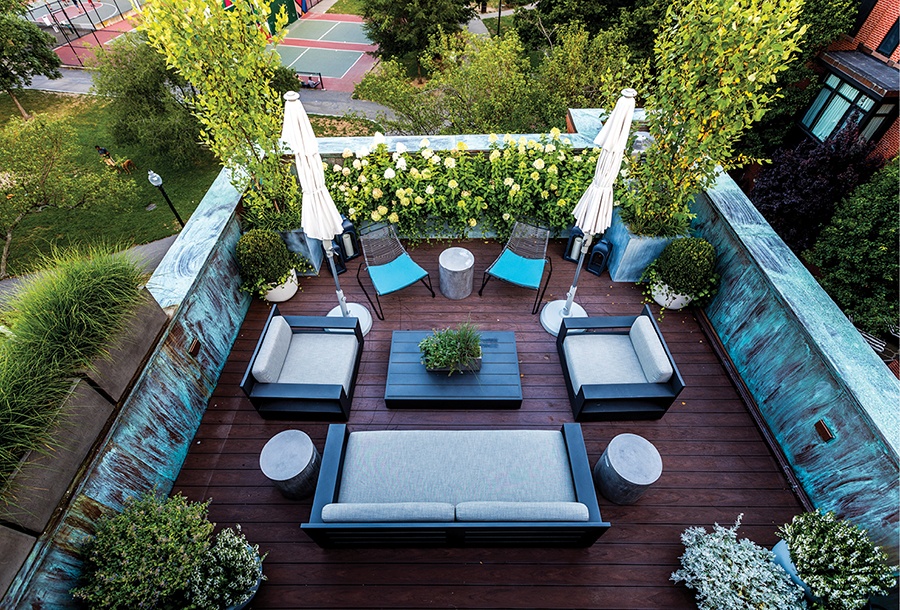 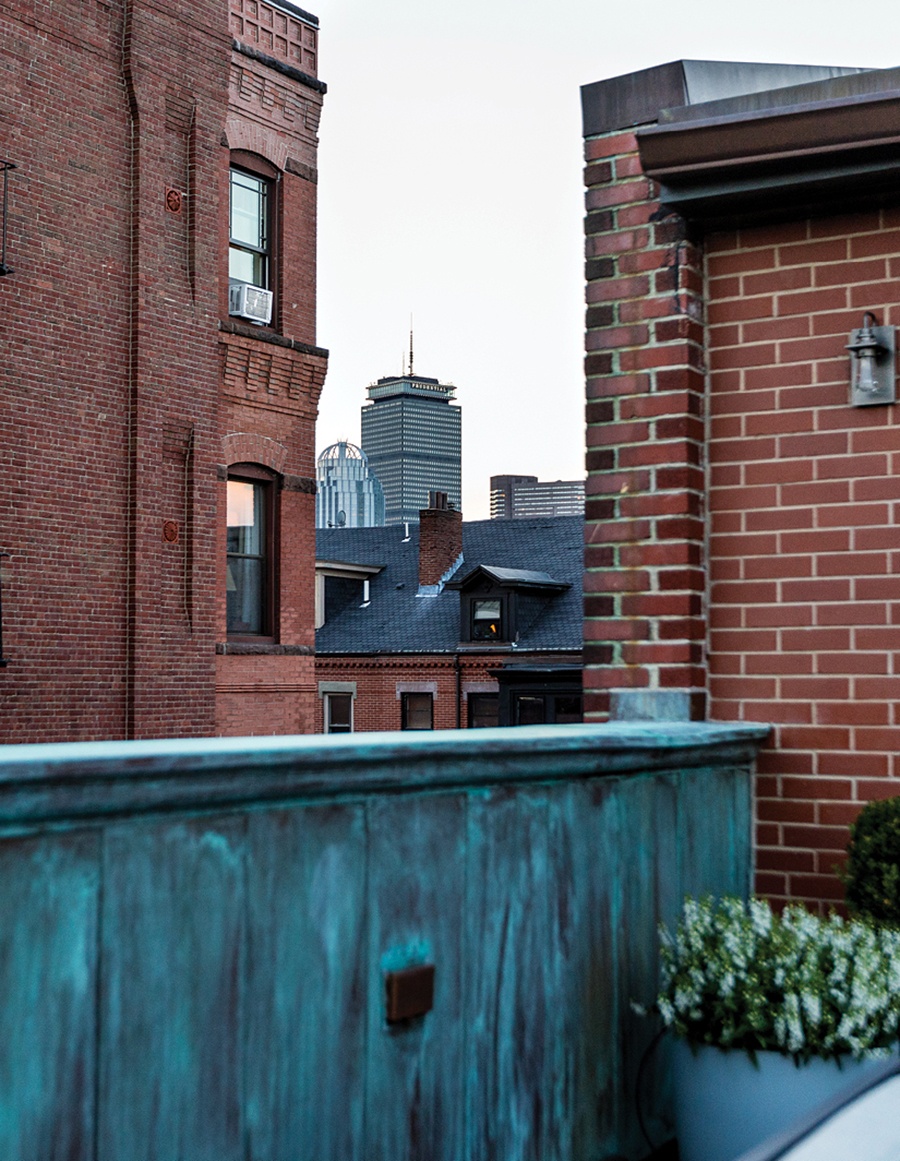 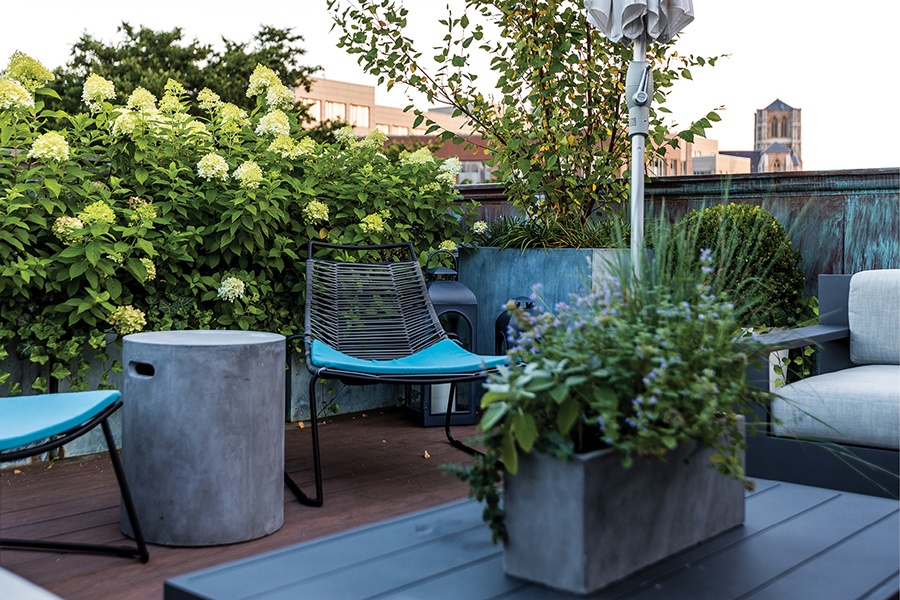 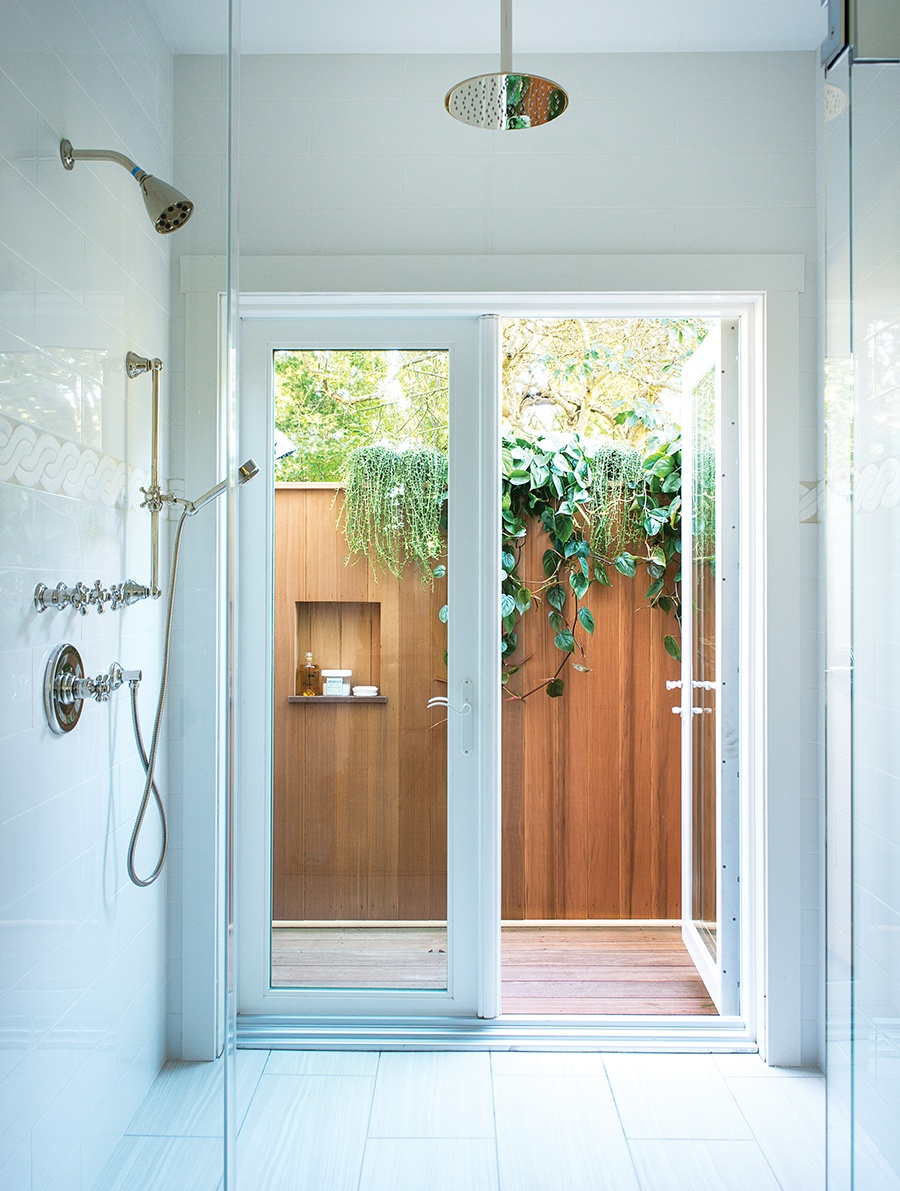 What’s a Nantucket vacation home without an outdoor shower? To create the beach-house staple her clients desired, interior designer Kathleen Hay thought outside the box: Rather than put the shower by a mudroom, or some other central location where “you’d have to go traipsing in your robe or your towel,” Hay explains, she teamed up with architect Chip Webster to design a private, open-air extension of the shower in the master bedroom.

The new spa-like bathing area is partitioned by a set of weathertight French doors. Its glass-enclosed interior boasts a rope-detail marble tile and a rainfall showerhead. Water empties via a French drain, so there’s no stepping over curbs while entering and exiting—only a small lip of weather stripping under the exterior doors. Outside, the shower features durable pressure-treated mahogany and a sturdy bronze showerhead, which won’t corrode like other polished-metal fixtures. Builders carved a niche into the wood for holding bath products, and made room for plants and vines to drape over the walls. And unlike traditional outdoor showers, this one doesn’t open to the backyard.

Hay sees it as more than just a utilitarian rinse station—this shower is built for pure enjoyment. “There’s some romance in thinking, ‘Oh, I’m going to take a shower. It’s so beautiful out, so let’s just pop out and make the most of what’s out here,” Hay says. —M.B. 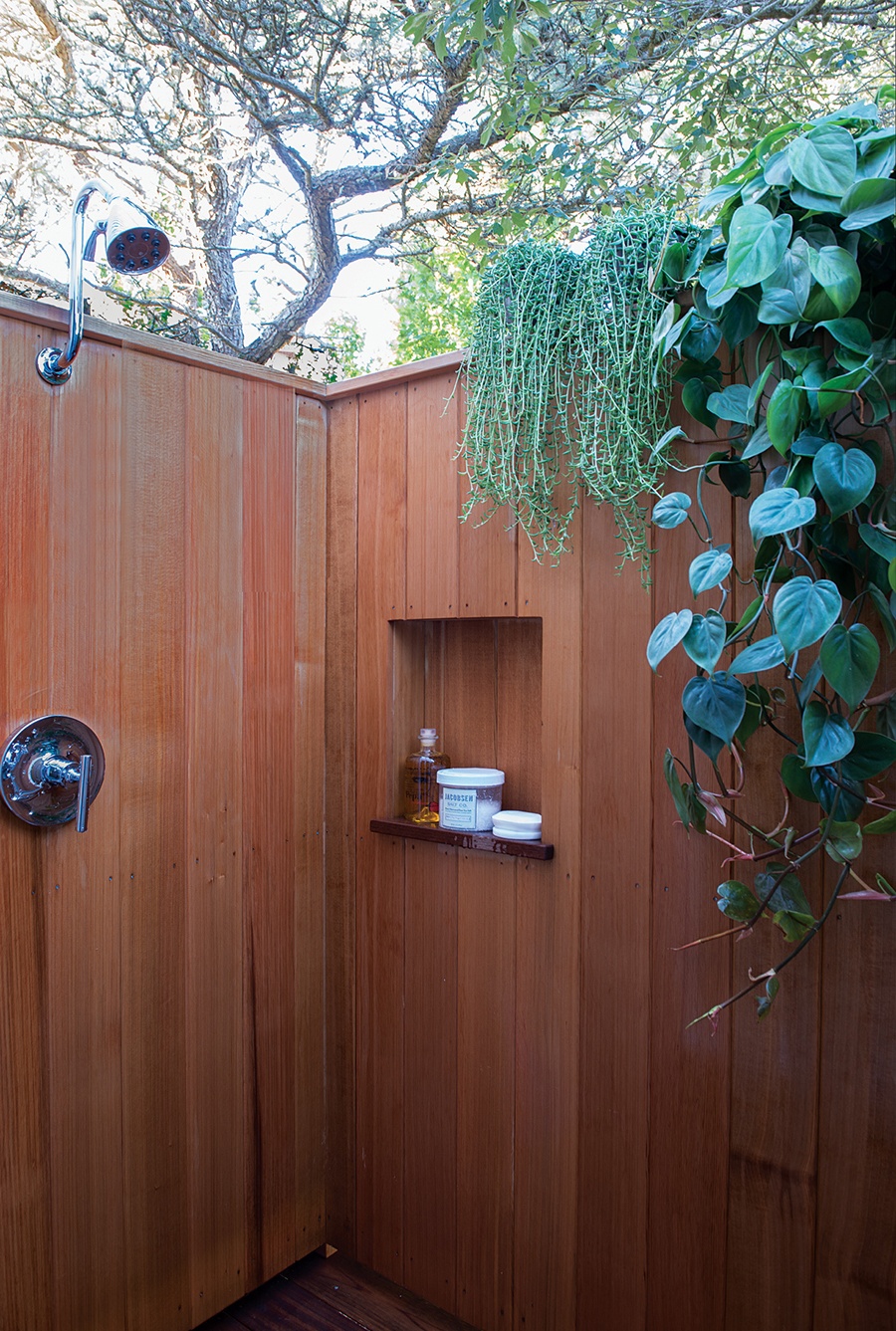 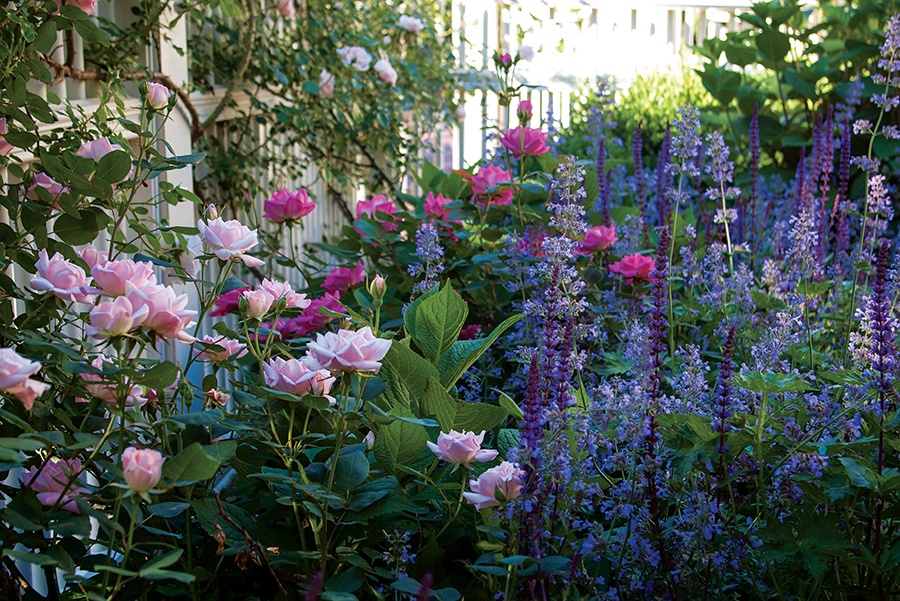 When a couple with five children bought this Cambridge property, the house—a recently restored 1828 Federal—was already in great shape. The grounds, however, were another story. Overgrown with lichen, river birch trees, and unruly boxwood, the grassless land hardly offered the inviting play space the new owners imagined for their kids. After cutting down a few trees, the couple called landscape designer Tom Wilhelm for backup. “The design was really awkward,” explains Wilhelm, of Sudbury-based A Blade of Grass. “The overarching [goal] was to make something that was low maintenance and functional for a 21st-century family.”

Signs of transformation dominate just about every inch of the revamped property. In the front yard, a new lawn and a fence—designed by Marshfield-based Perfection Fence with period-appropriate spindles and finial tops that reflect the home’s 19th-century roots—“secure the kids from the street,” Wilhelm says. They also form a lovely backdrop for climbing roses, hydrangeas, salvia, peonies, and other freshly installed blooms. New plantings and stonework brighten the rest of the yard: The side garden area—lush with flowering redbud trees, shade-tolerant rhododendrons, and garden steppers—has been especially popular with the family. “It’s a little place for the kids to explore,” Wilhelm says. —A.T.

Landscape Designer/Contractor
A Blade of Grass 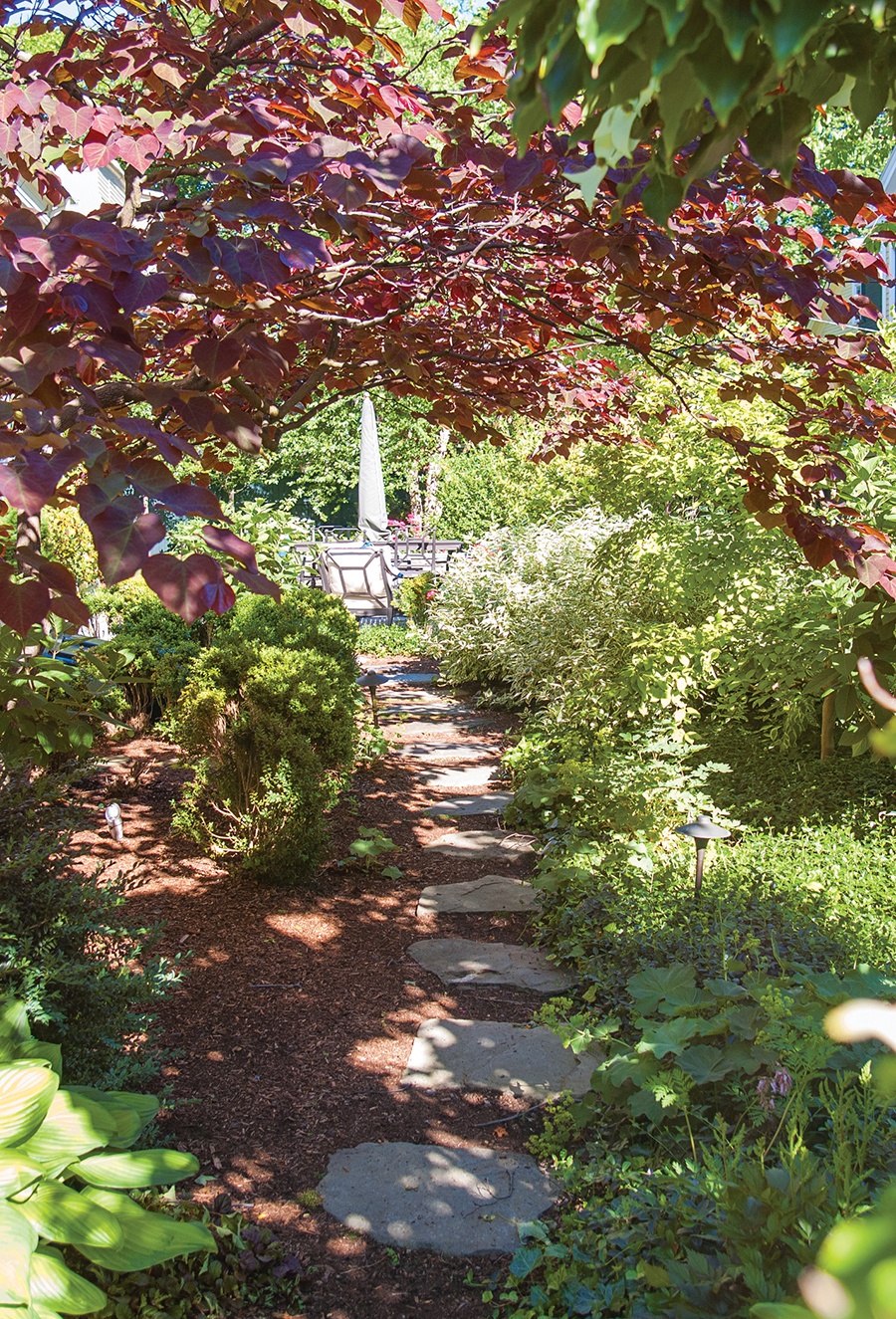 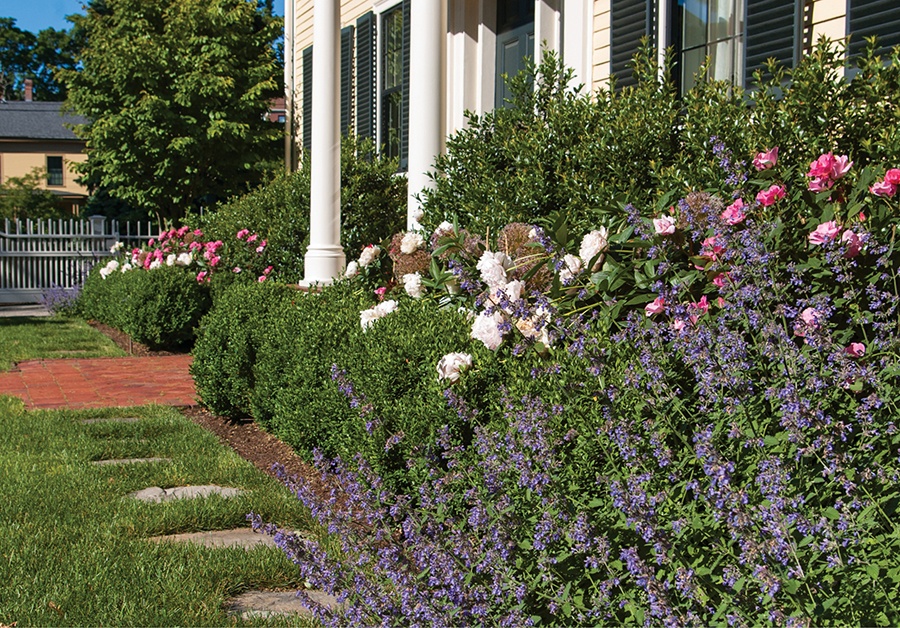 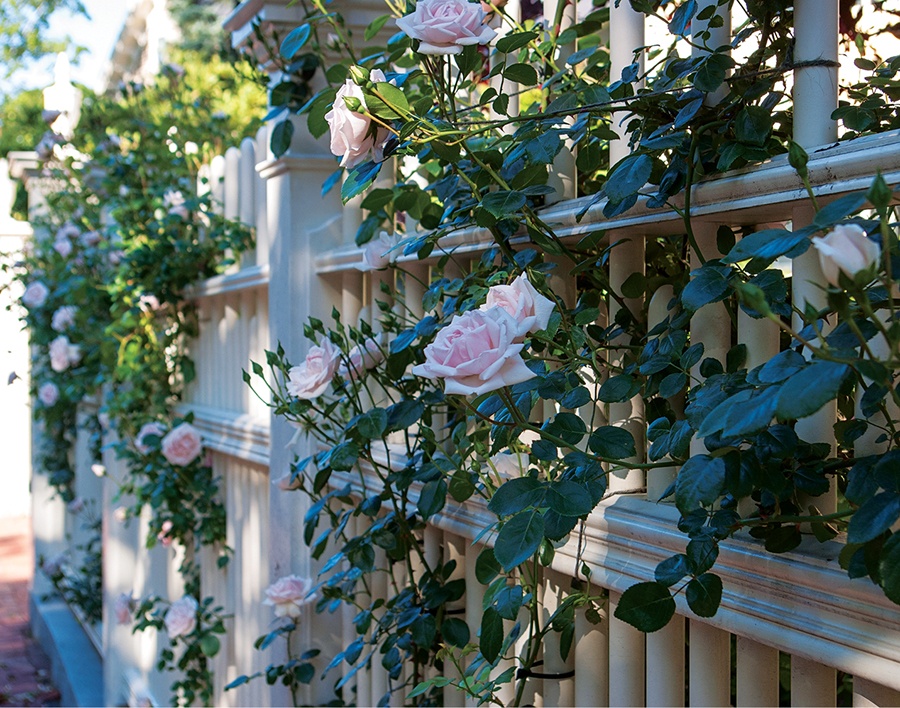 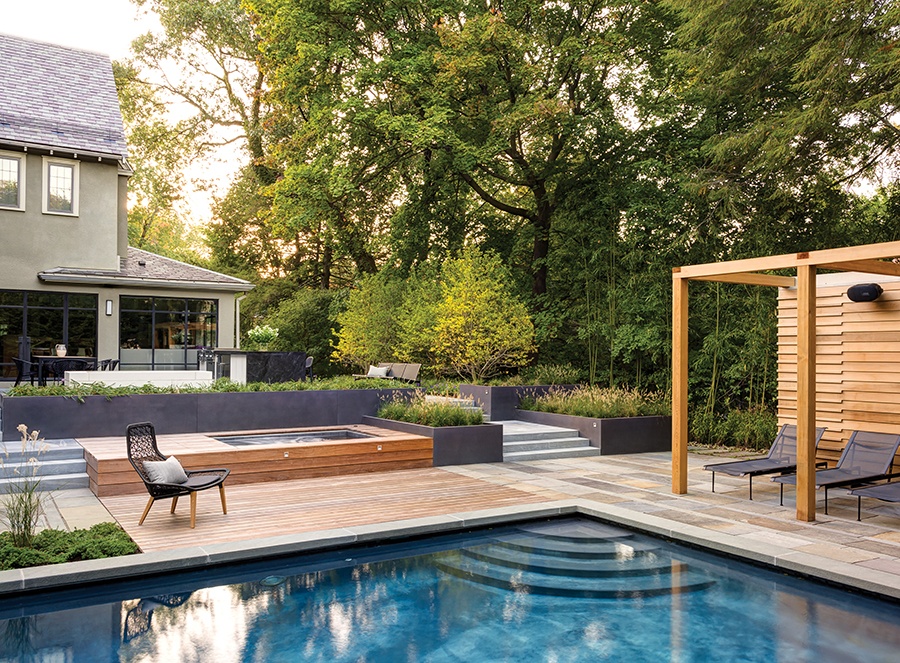 Nothing puts a damper on a sparkling kitchen renovation like views of a lackluster backyard. To wit: this Newton home, where new glass sliders opened to a too-small patio with overgrown retaining walls and no direct walkway to the property’s in-ground pool. “It was more of a transition space. Nothing about its proportions or circulation made it usable,” says landscape architect Stephanie Hubbard, principal of Boston-based SiteCreative. “The clients wanted to connect [the kitchen] with something beautiful outside.”

Determined to create a more functional (and aesthetically pleasing) living area for the owners and their three children, Hubbard reorganized the 6,000-square-foot yard into a series of carefully scaled zones. Just off the kitchen, a new bluestone terrace hosts two dining areas: one anchored by a Mamagreen table, and the other by a custom island with built-in appliances and barstool seating. A limestone fire pit and blackened-steel planters help partition the terrace from the rest of the multilevel space, which includes additional lounge areas, an ipe-clad spa, and a new pool house. Flowering magnolia trees, lush grasses, and other plantings add color throughout the scheme, while complementary wood and stone building materials tie it together.

“The family loves to entertain,” Hubbard says. “That was really important for the homeowners: making it a space that the kids want to bring their friends to.” —A.T. 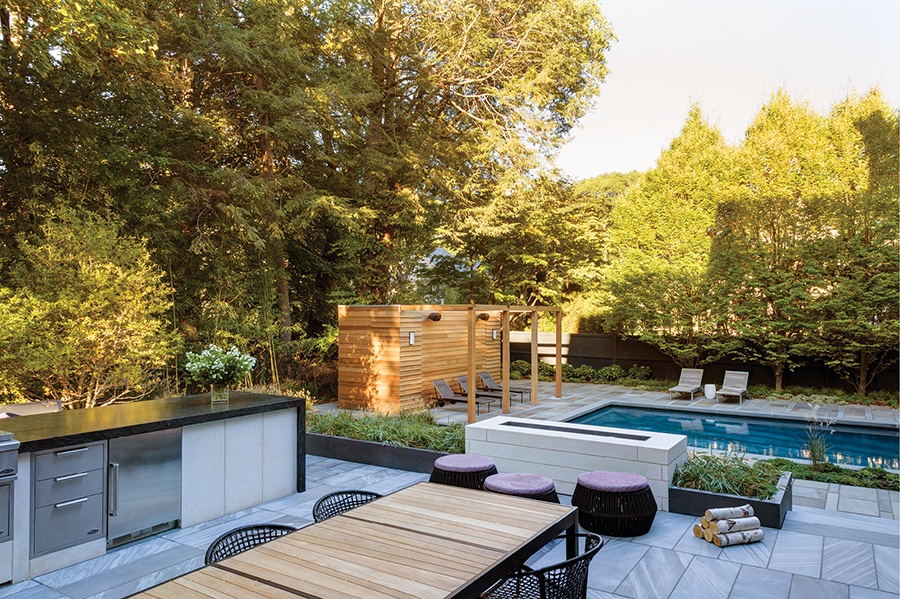