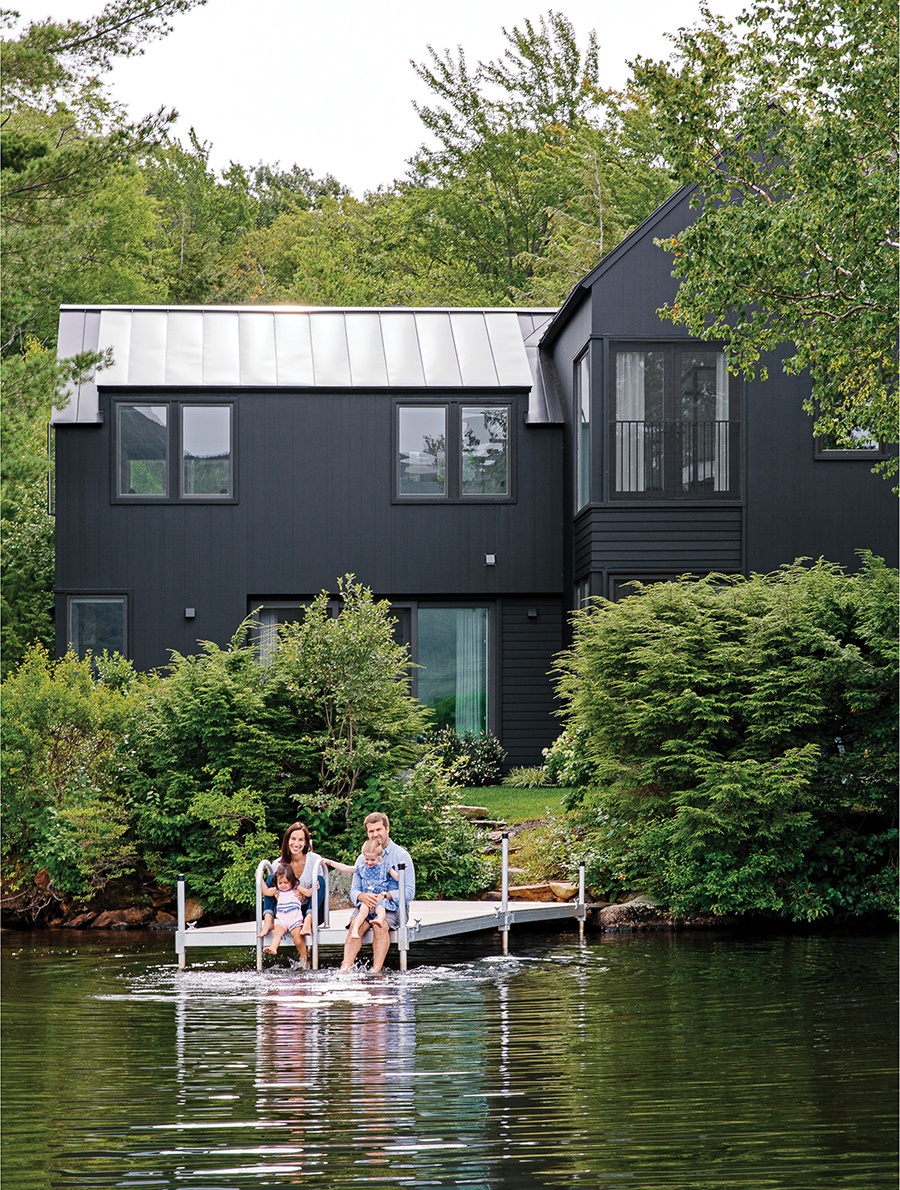 The homeowners with their daughters on the dock behind their new summer home. / Photograph by Sean Litchfield

As Americans living abroad, a couple with two young daughters knew the onus would be on them to stay connected to family and friends back in the States. So when they fell in love with a two-acre, pond-front property in the husband’s home state of New Hampshire—an idyllic locale for a vacation retreat—they put in an offer. “We were living in Hong Kong, which is unbearably hot in the summer,” the wife says. “We knew being in New Hampshire—enjoying the little beach, watching the sun set behind the mountain—would be perfect.”

After living in the property’s outdated, single-story house for two summers, the couple (who currently reside in London) hired James Dixon Architect PC and interior-design firm Spazio Rosso to create a stateside home base for their family of four. The wooded property—formerly the site of an early-20th-century boys’ camp—originally included three outbuildings in addition to the main house. Contractors leveled all four structures, building a new main house and a pair of guesthouses (which the family refers to as the “barn” and the “casita”) in their place. Each building follows its modest original footprint, but gained extra space with the addition of a second story or loft. “Designing within the confines of a footprint is a lot more fun than being given an empty lot,” architect James Dixon says. “It’s like a puzzle.” 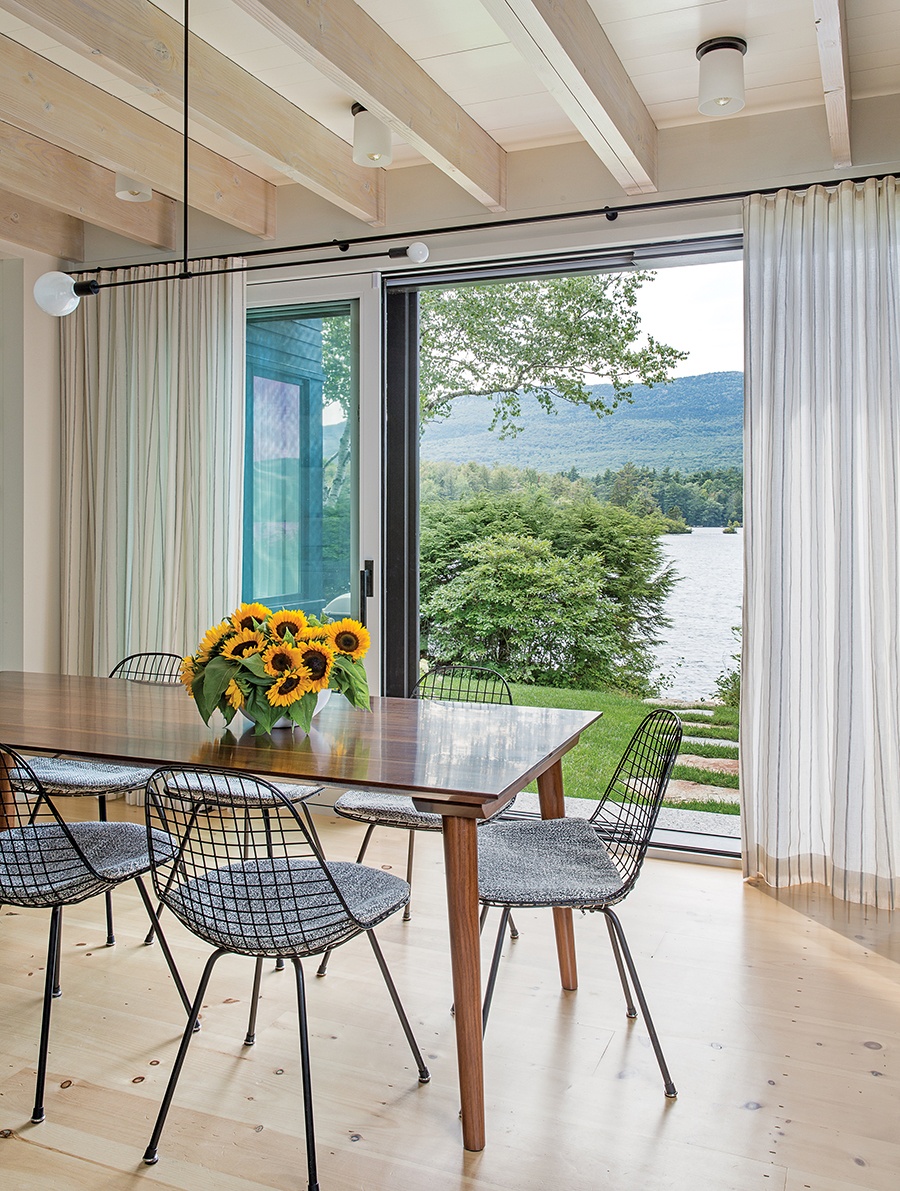 Beginning with the buildings’ exteriors, the design team’s overall approach strikes a balance between the couple’s varied aesthetics. “We used traditional materials favored by [the husband], and applied them in a modern way that [the wife] really responded to,” Dixon explains. Each structure features classic tongue-and-groove cedar shiplap, stained a contemporary black, and a standing-seam metal roof. Except for the vivid pops of color on the front doors—green for the main house, magenta for the barn, and blue for the casita—the simple, dark buildings recede into the forest. “We needed a cross between a glass box and a log cabin,” the wife says. “We landed a little Scandinavian.”

Locally sourced granite slabs lead to the approximately 2,000-square-foot main house. The interior feels light and airy, with white walls and wide-plank pine floors. Near the front door, the shiplap-wrapped staircase with maple treads and a steel railing hides a secret: a Harry Potter–style playspace, accessed by a tiny door on one side and a full-size door on the other. “You should see the number of cousins that fit in there at one time,” the wife says.

The living room lies straight ahead, offering a view of the pond. Interior designer Stephanie Rossi anchored the seating area with an antique kilim in bright, earthy hues that complement the richer color of the sofa’s velvet upholstery. Mimicking the home’s black exterior, dark floor-to-ceiling “Noir” soapstone sheathes the modern fireplace, while a 1950s Nakashima coffee table inherited from the wife’s grandmother sits proudly in the center of the room. “It’s funny, people comment that the top [of the table] is shaped like New Hampshire,” the wife says.

The living room opens to a combined kitchen and dining area, where exposed whitewashed joists create a cabin-like feel. Black cabinetry with “Noir” soapstone counters stretches along the side wall, accented by subway tile and a trio of cantilevered shelves. A black island with a butcher-block top helps partition the kitchen from the dining area, which includes a Rossi-designed solid-walnut dining table (fabricated by Jeff Kizior Woodworking); vintage black metal chairs from the wife’s grandmother; and an industrial Lambert & Fils metal pendant. 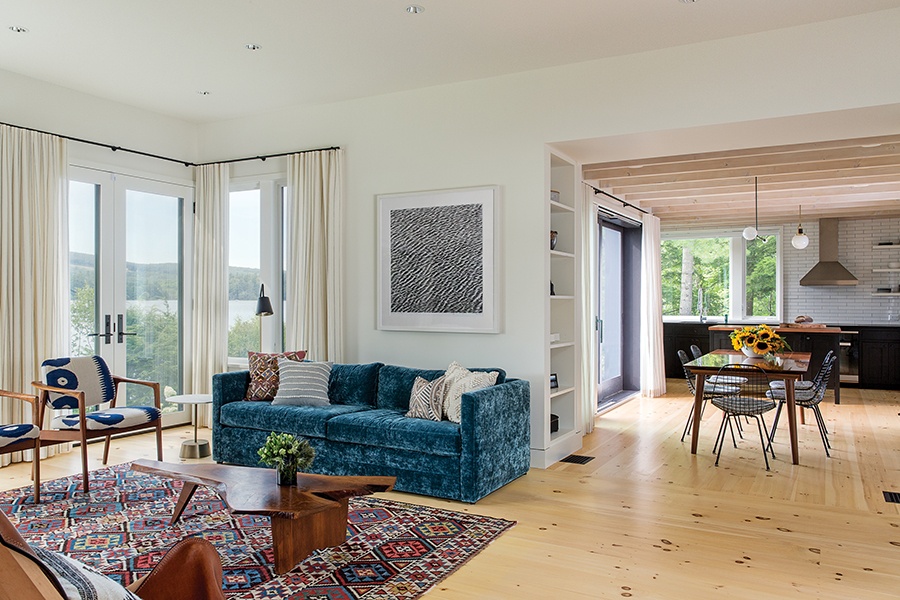 A woodblock print by Beijing-based artist Chen Qi accents the sofa in the living room. / Photograph by Sean Litchfield 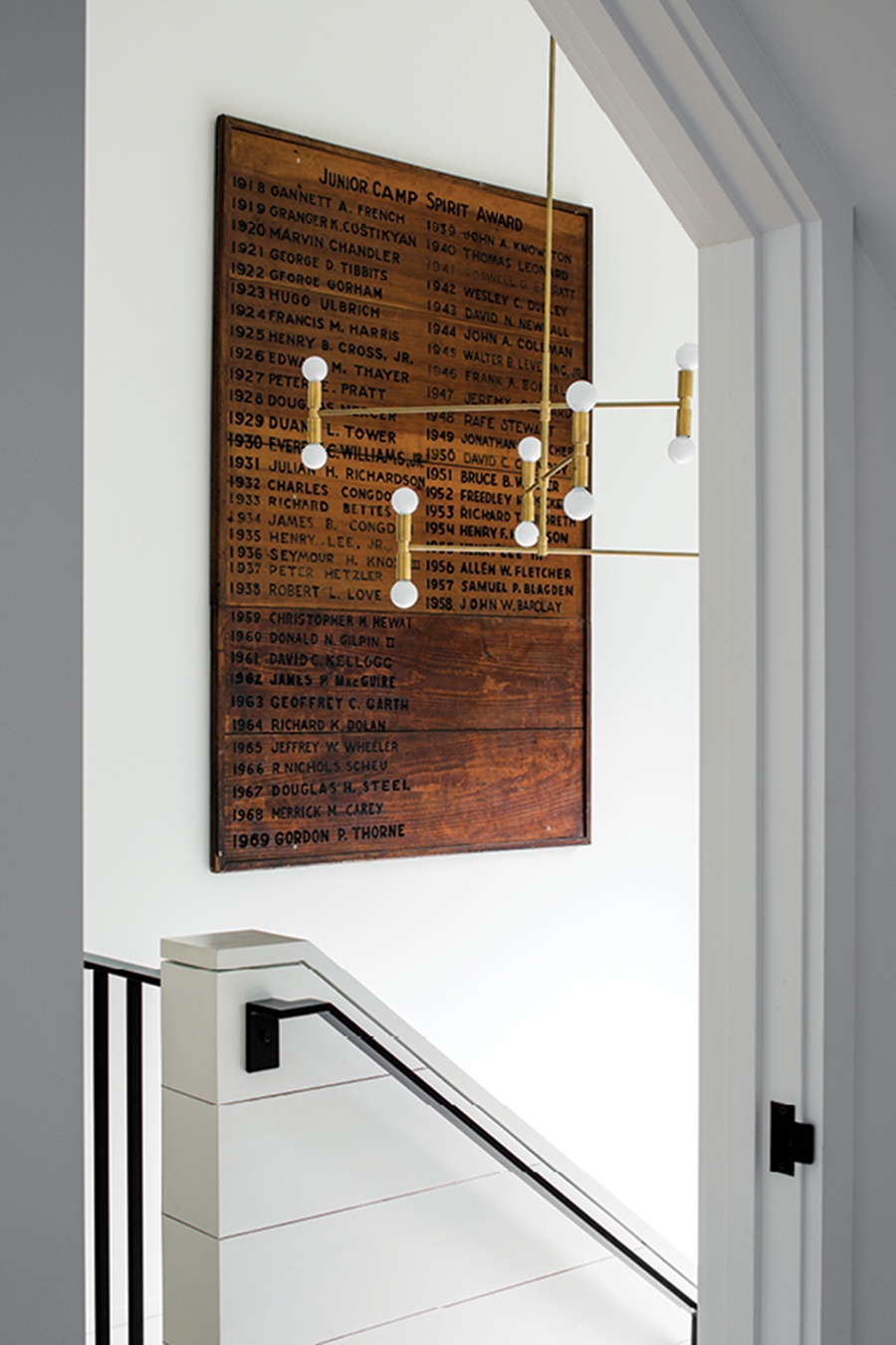 A relic from the property’s past life, a wooden sign that lists the former camp’s Spirit Award winners hangs in the stairwell of the main house. / Photograph by Sean Litchfield 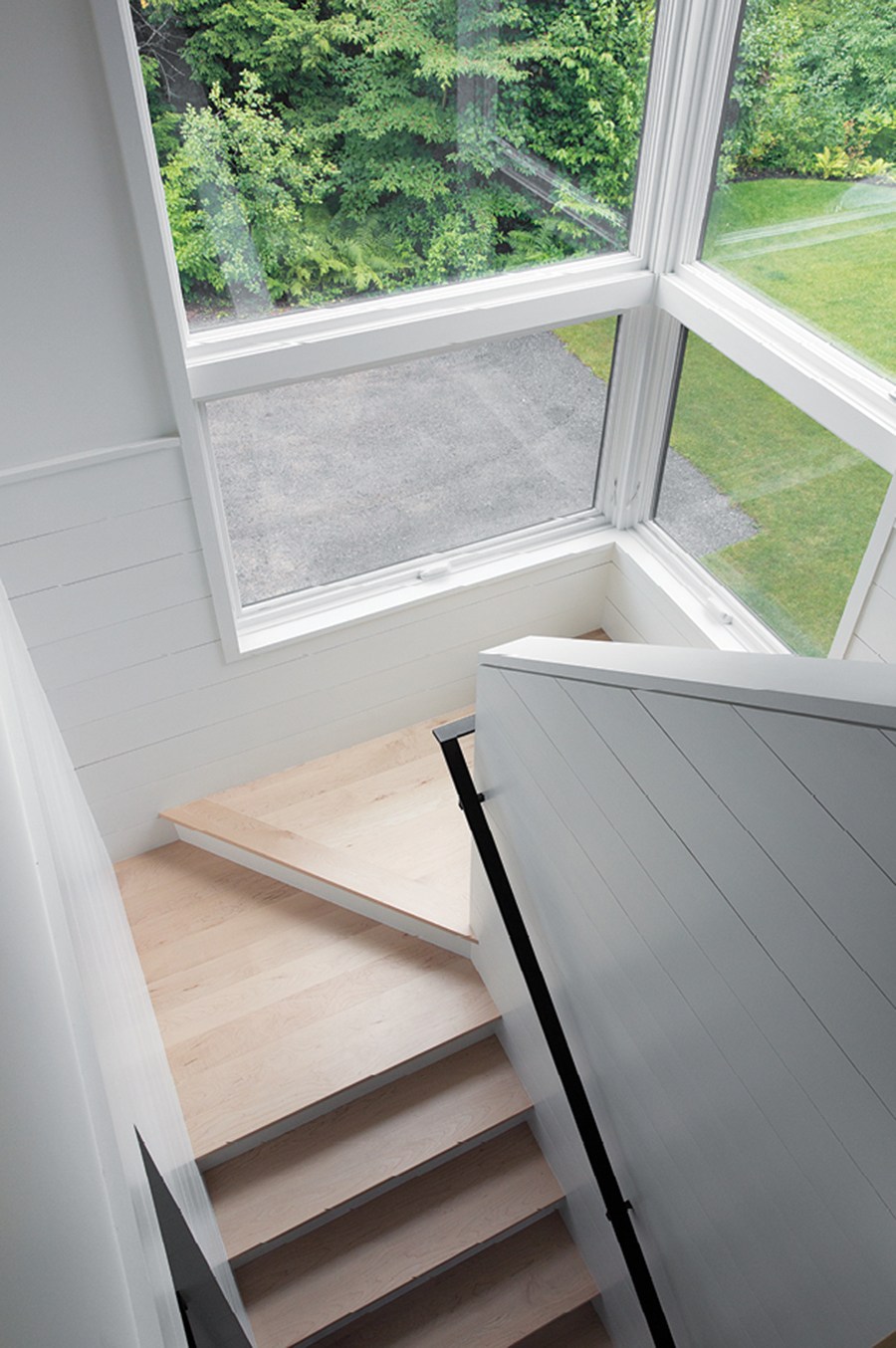 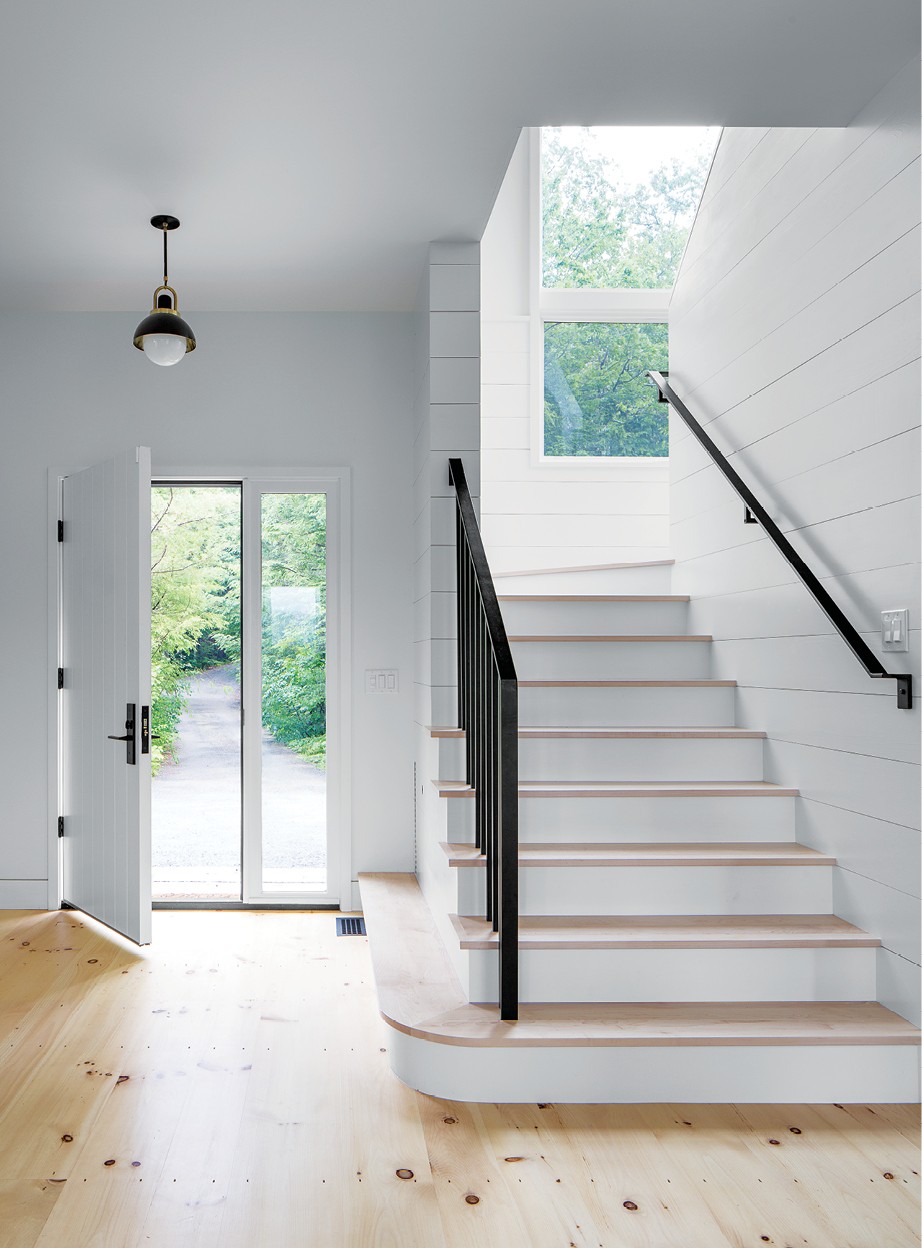 Upstairs, the three bedrooms are simple and spare, ideal for laid-back summer living. Exposed rafters add definition to the cathedral ceiling in the master, complete with a modern gas fireplace. The guest room boasts natural white and wood tones, save for the bold shot of color from the geometric rug. Down the hall, antique Jenny Lind beds (once owned by the husband’s aunt and painted Benjamin Moore’s “Mighty Aphrodite” purple) brighten the kids’ room. Rossi treated the walls to the same playful hue, stopping halfway up to avoid overwhelming the space. “Color is important throughout,” Rossi says. “It’s strategic, and a little eclectic.”

Outside, the two new guesthouses offer plenty of space—and privacy—for family and friends. (While the husband’s side of the family lives in town, the wife’s parents live in Michigan.) The houses also act as an extension of the family’s main living space: The upstairs lounge area in the approximately 400-square-foot barn, for example, functions as the TV room.

Despite their divergent tastes, both husband and wife are thrilled with the results, thanks to the team’s creative synthesis of ideas. “I didn’t know living in a house I loved could make me so happy,” the wife says. 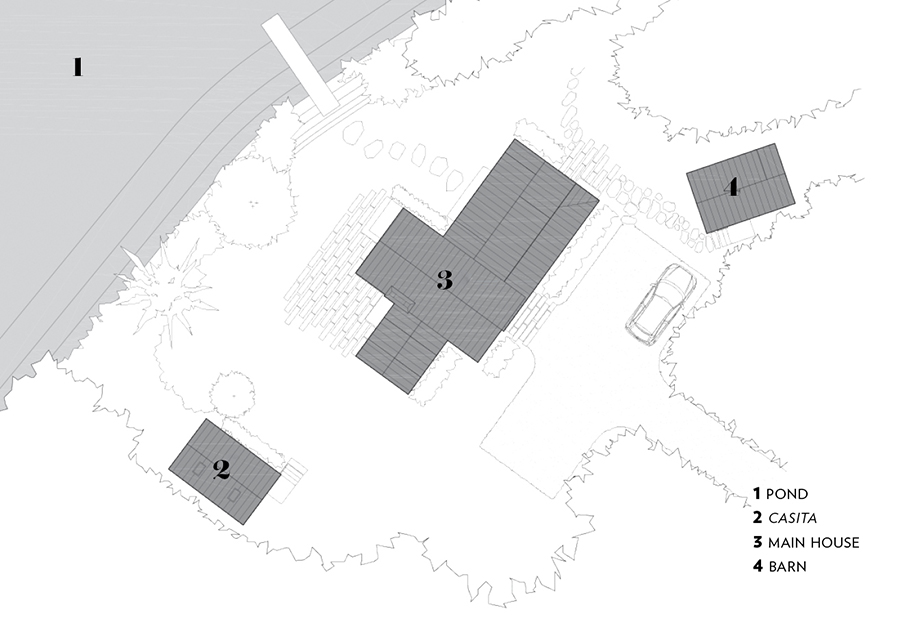 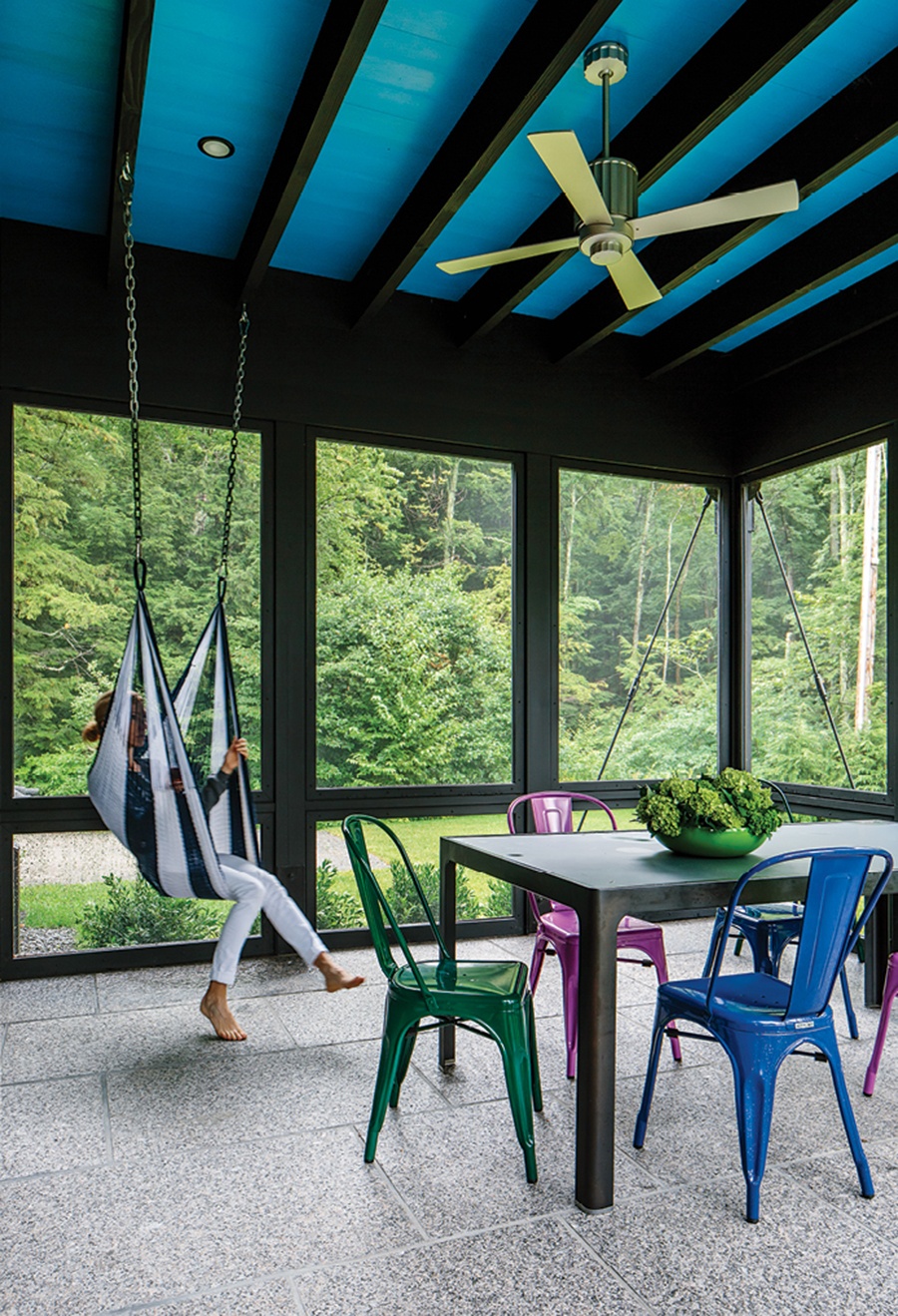 The screened porch provides an extra dining area, a hammock for reading (or naps), and open space for running around on rainy days. / Photograph by Sean Litchfield 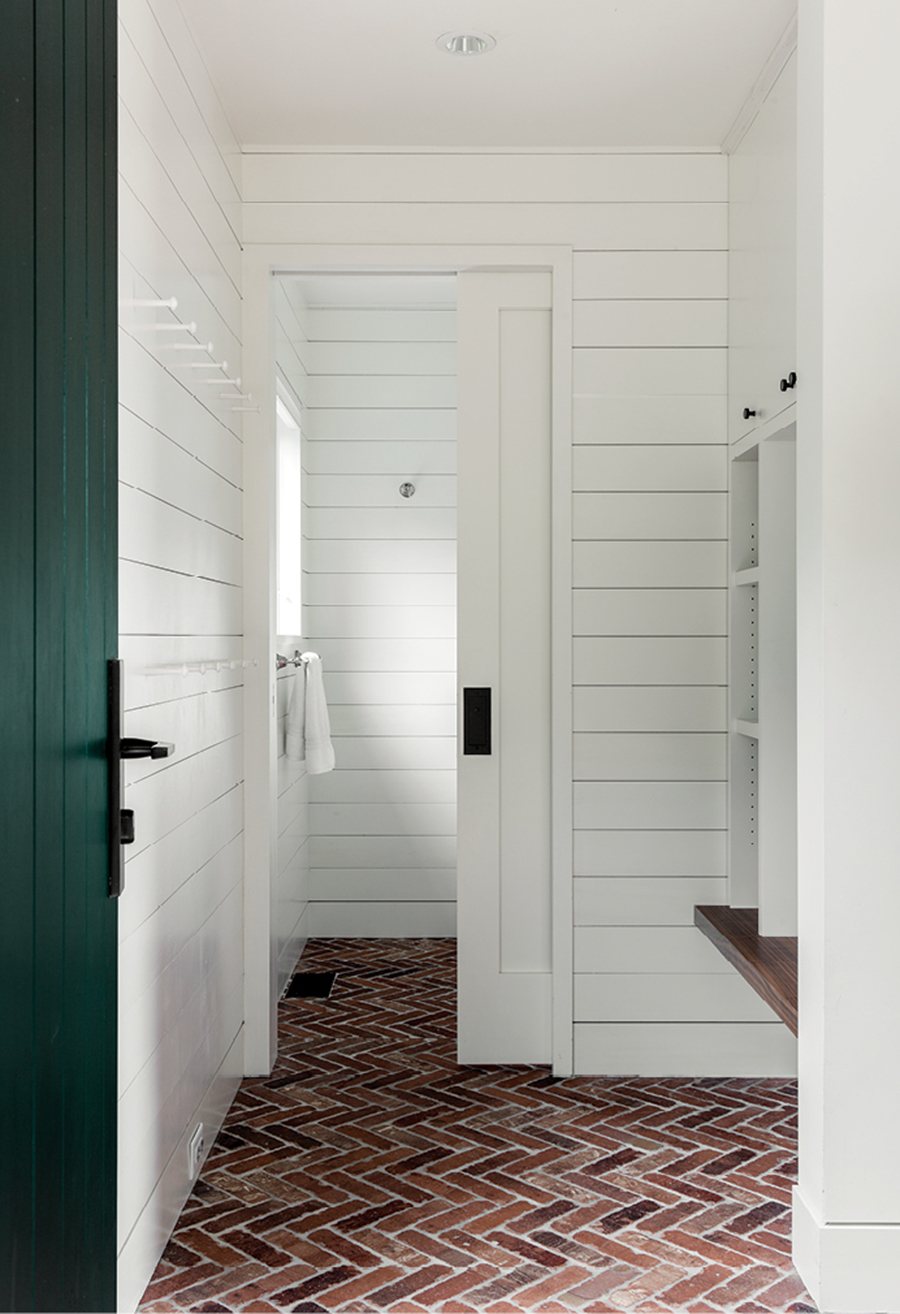 Architect James Dixon specified brick laid out in a herringbone pattern for the mudroom floor. / Photograph by Sean Litchfield 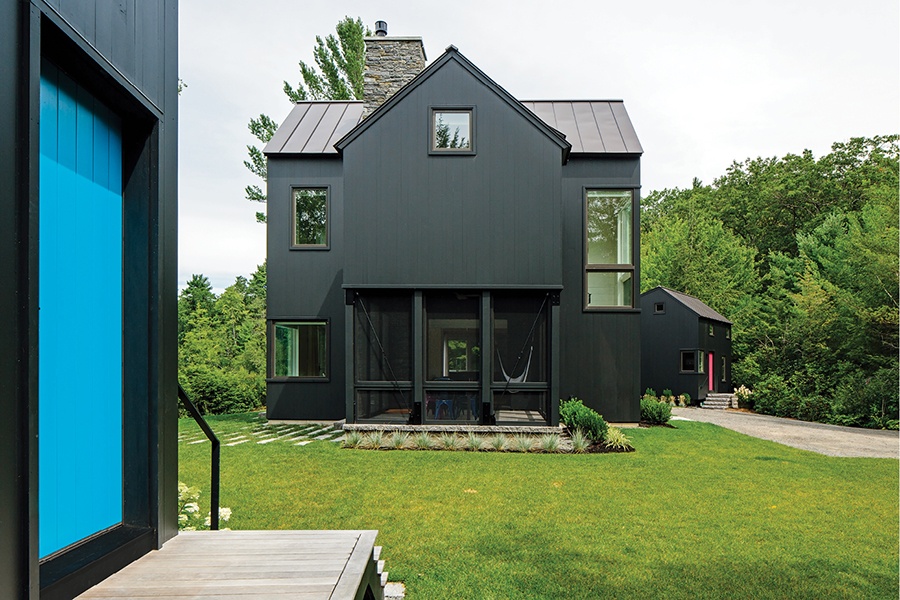 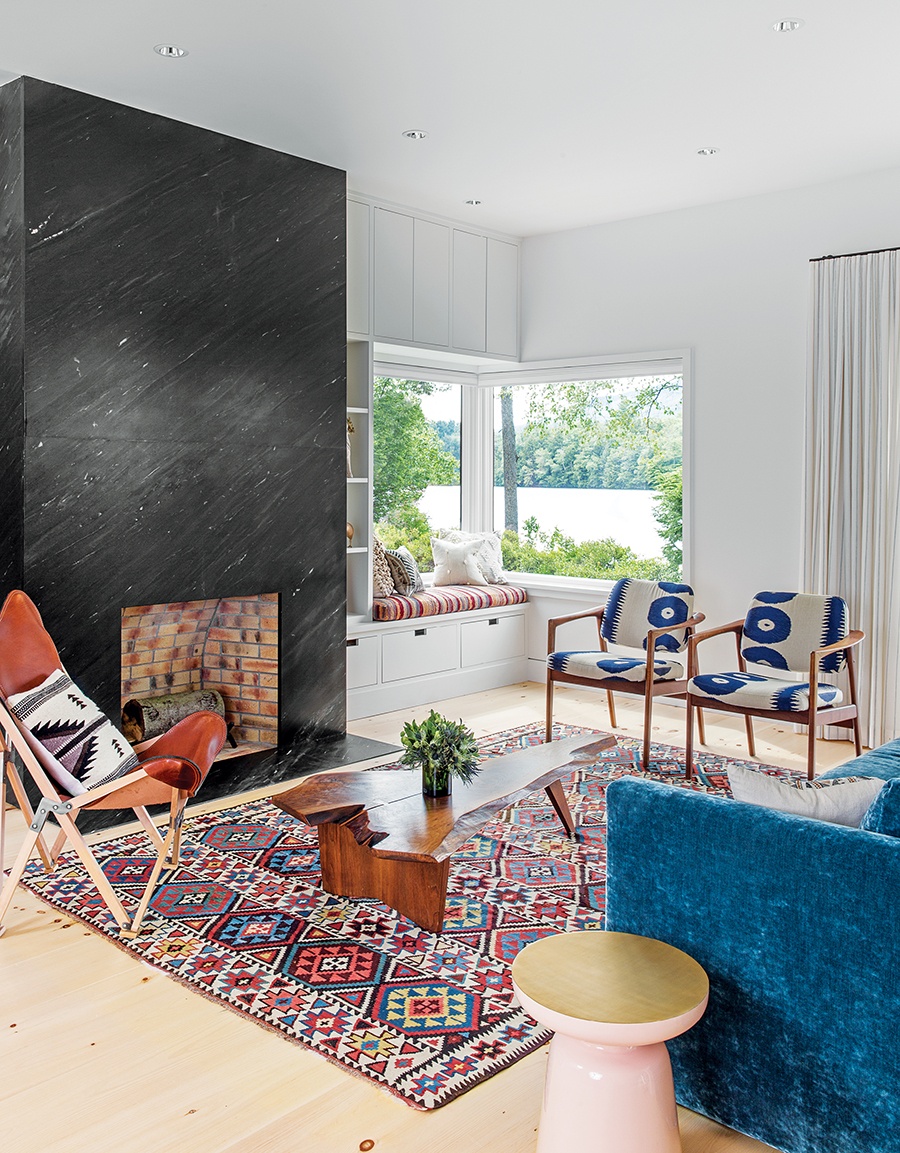 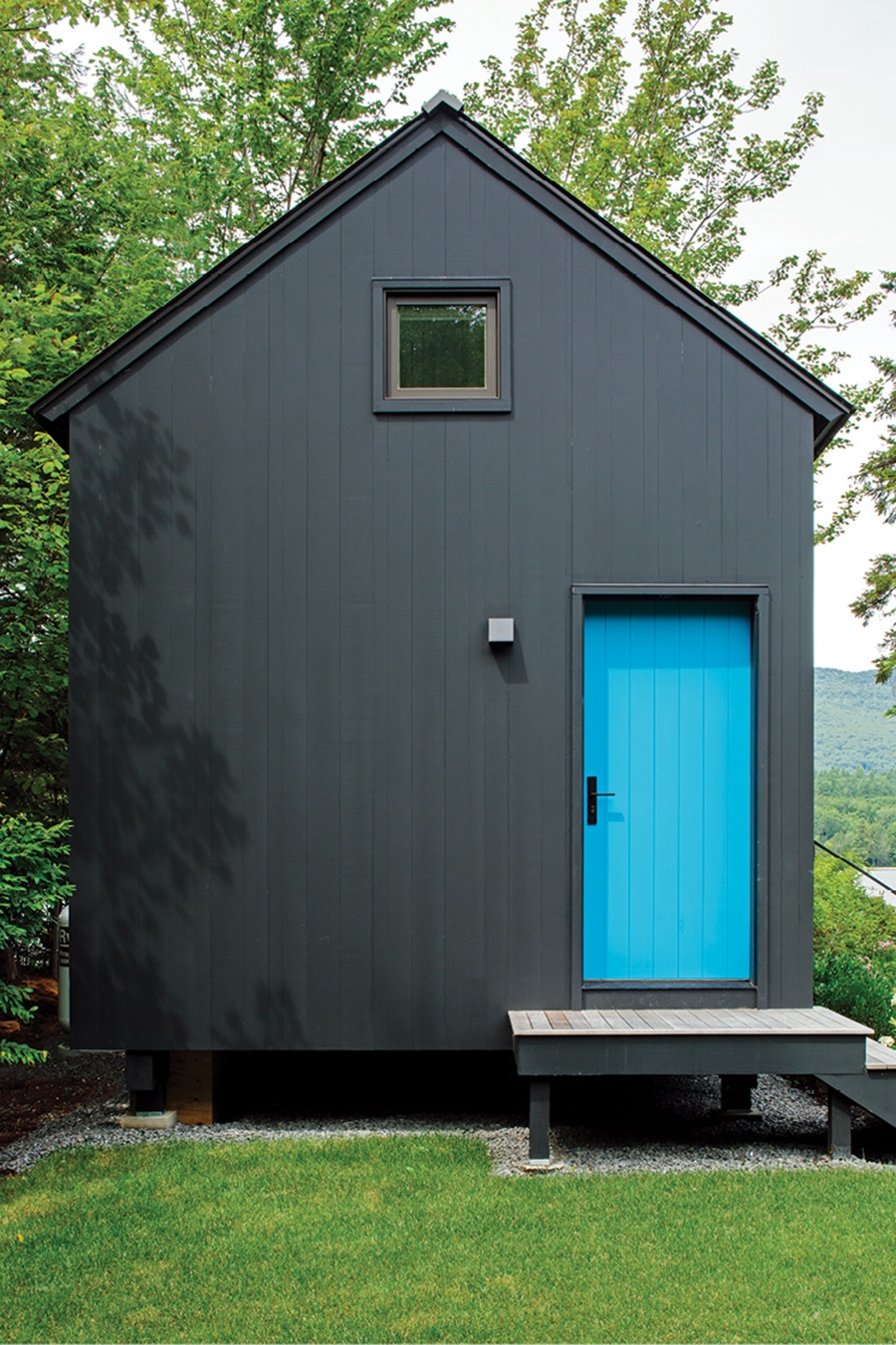 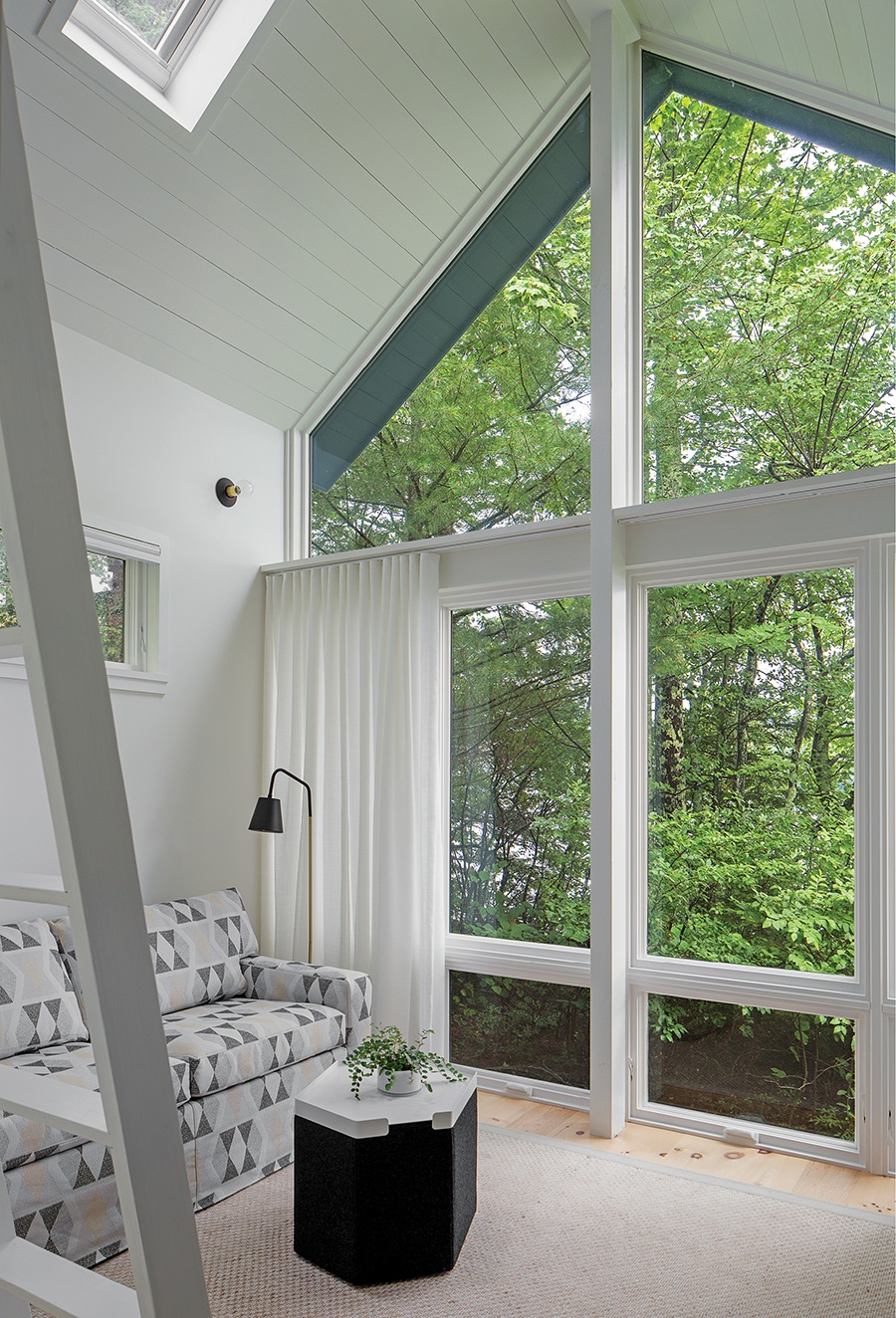 Dixon designed the casita with a full wall of glass facing the pond. The Mitchell Gold + Bob Williams sleeper sofa is upholstered in a Mexican-inspired geometric fabric. The Blu Dot “Hecks” ottoman, which features a removable tray, can serve as a seat or a table. / Photograph by Sean Litchfield 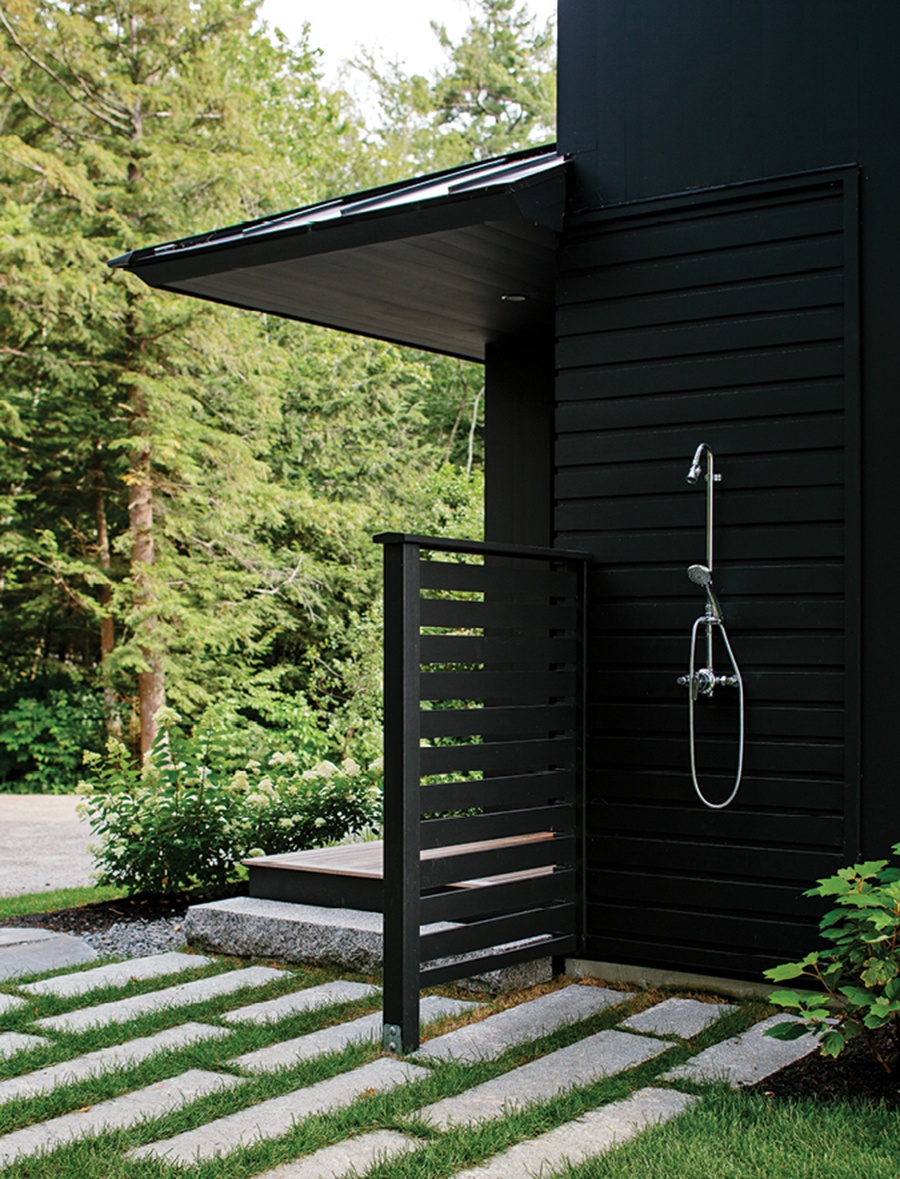 An outdoor shower lives around the corner from the mudroom in the main house. / Photograph by Sean Litchfield 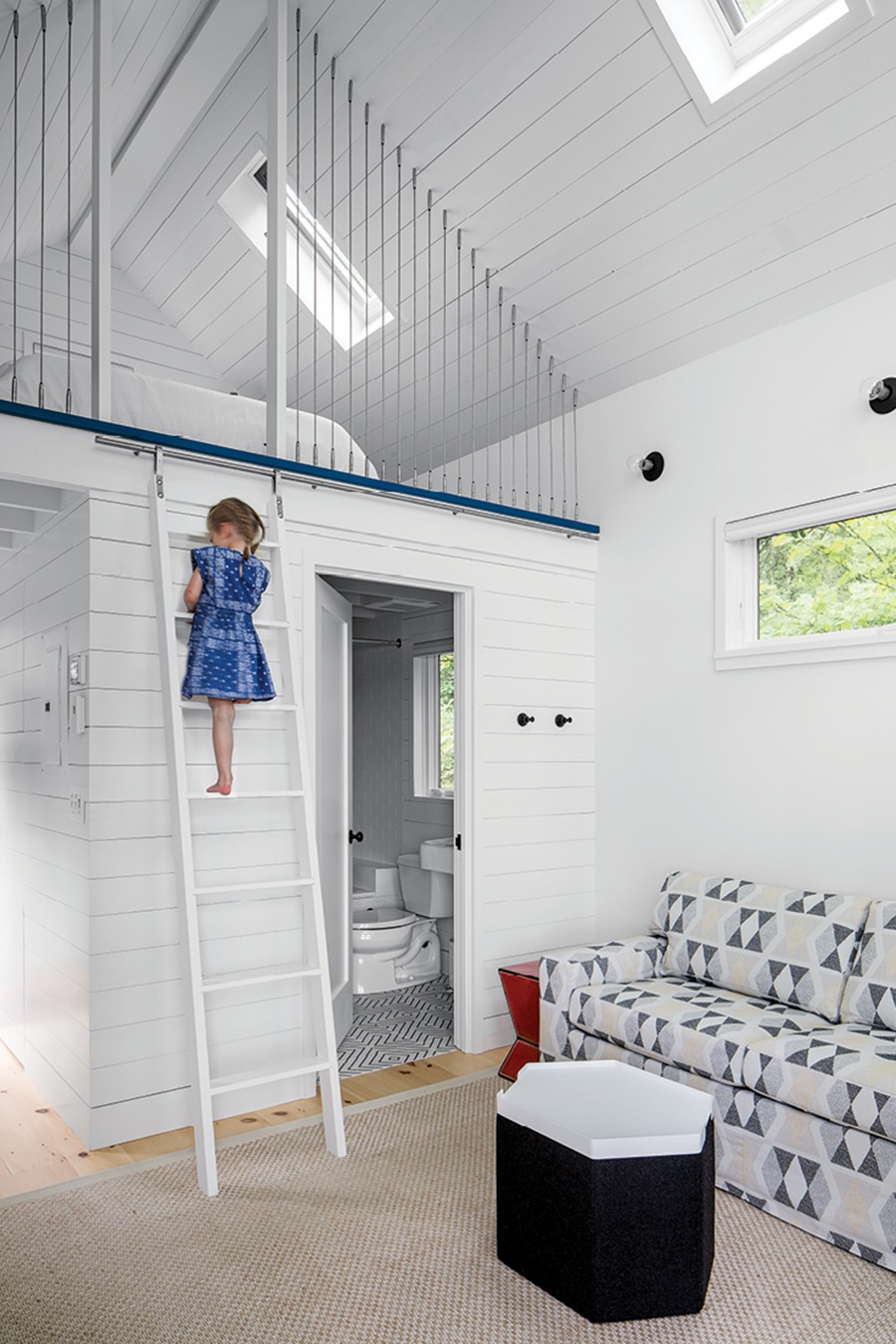 The loft in the casita boasts a blue-painted floor and a series of protective wire cables. / Photograph by Sean Litchfield 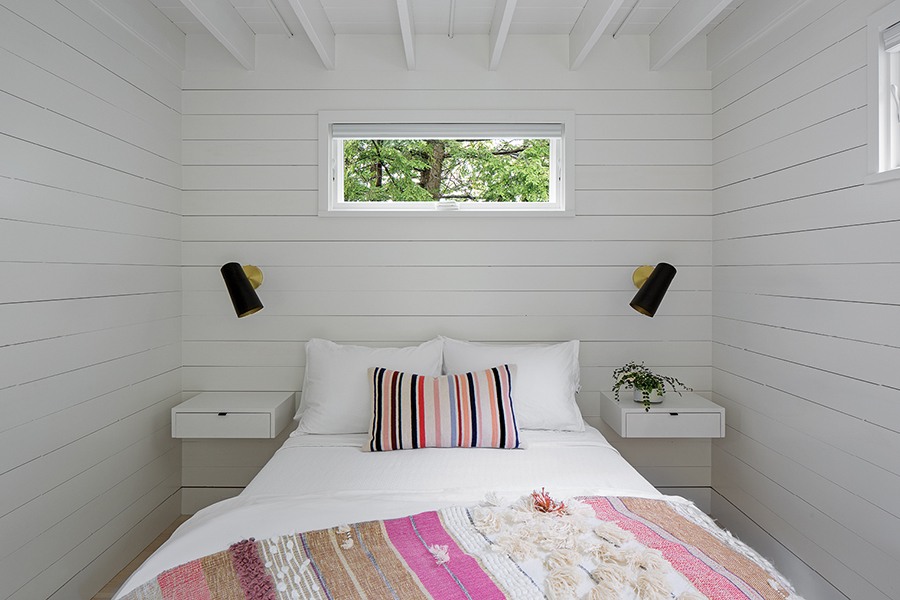 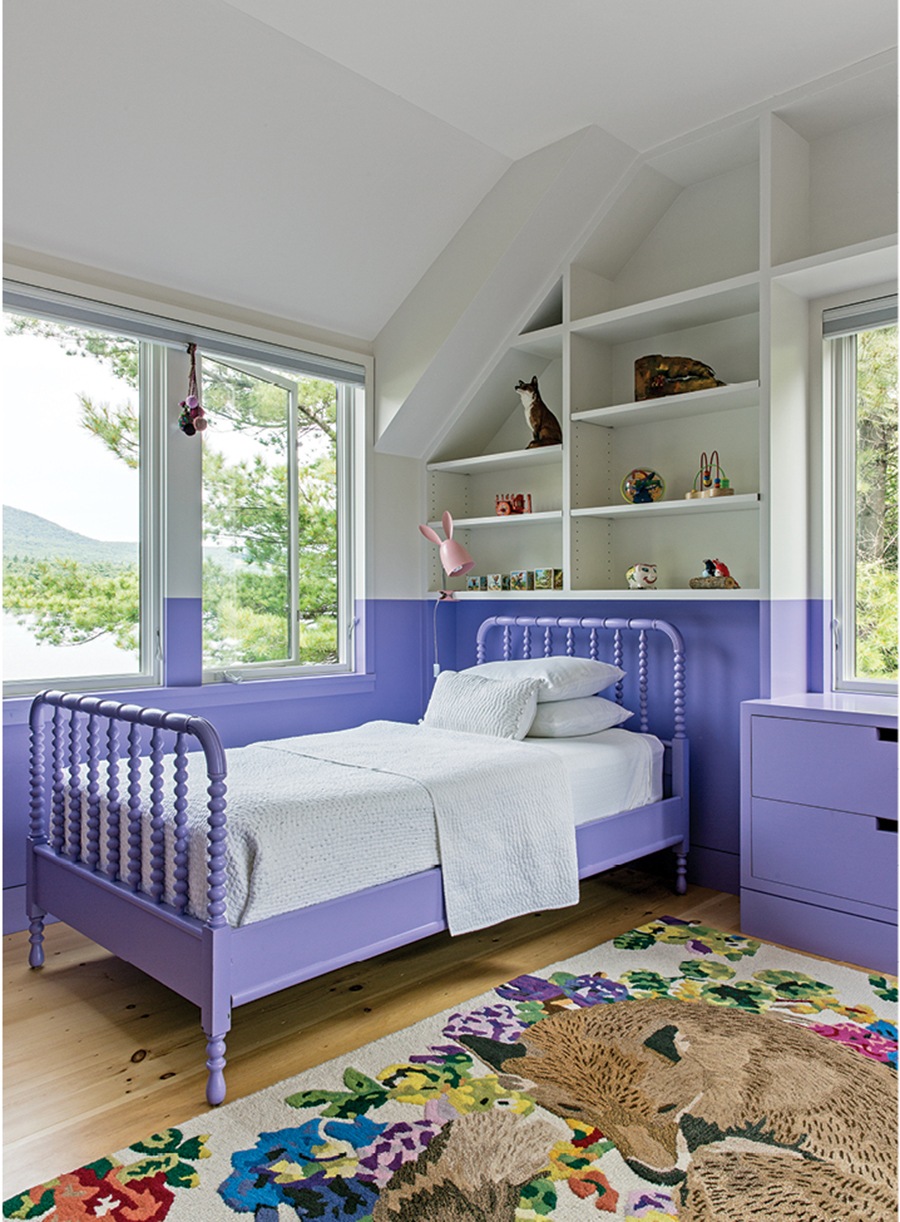 A rug from Anthropologie and custom built-ins enhance the girls’ white-and-purple bedroom. / Photograph by Sean Litchfield 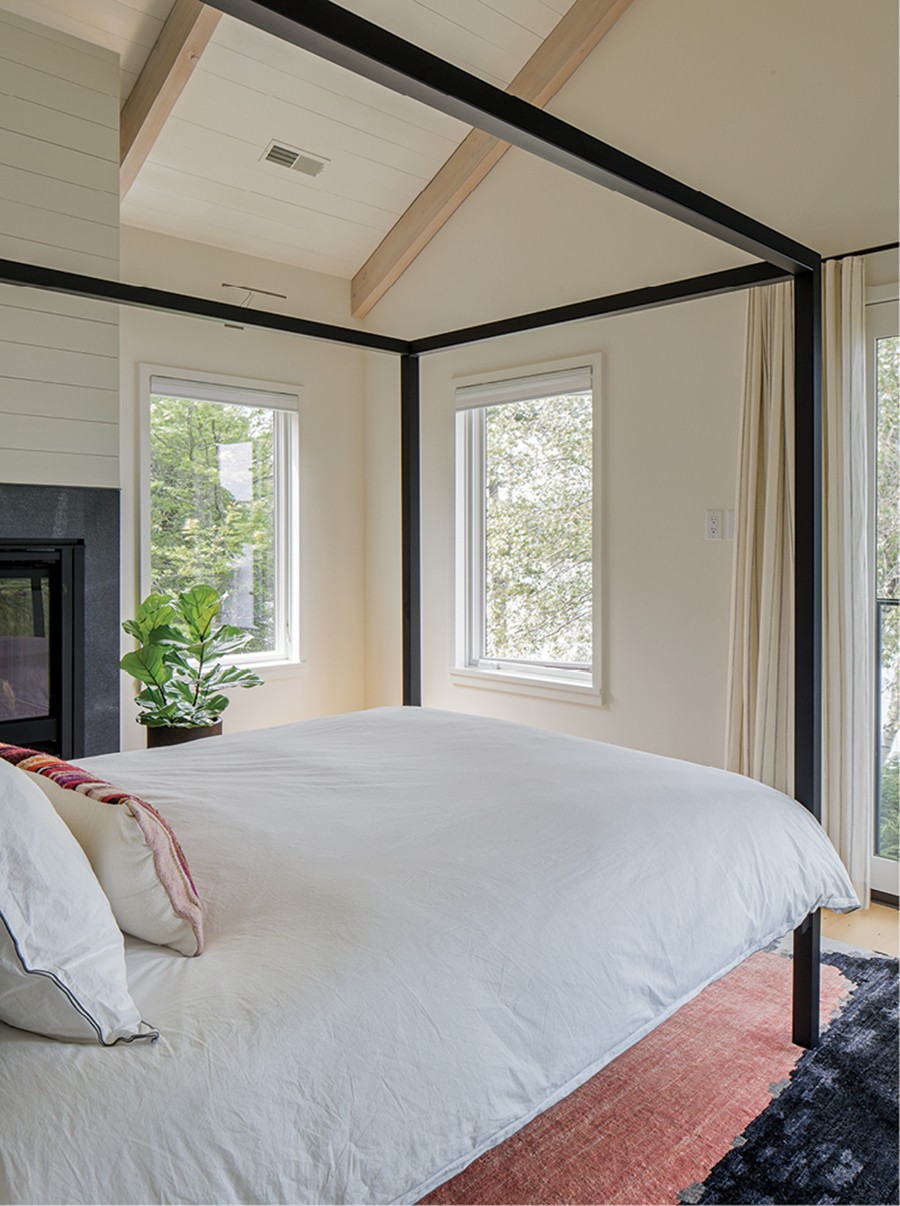 In the master bedroom, interior designer Stephanie Rossi chose the steel “Architecture” bed from Room & Board for its strong lines. “I like the dark elements running through the middle of the space,” she says. / Photograph by Sean Litchfield 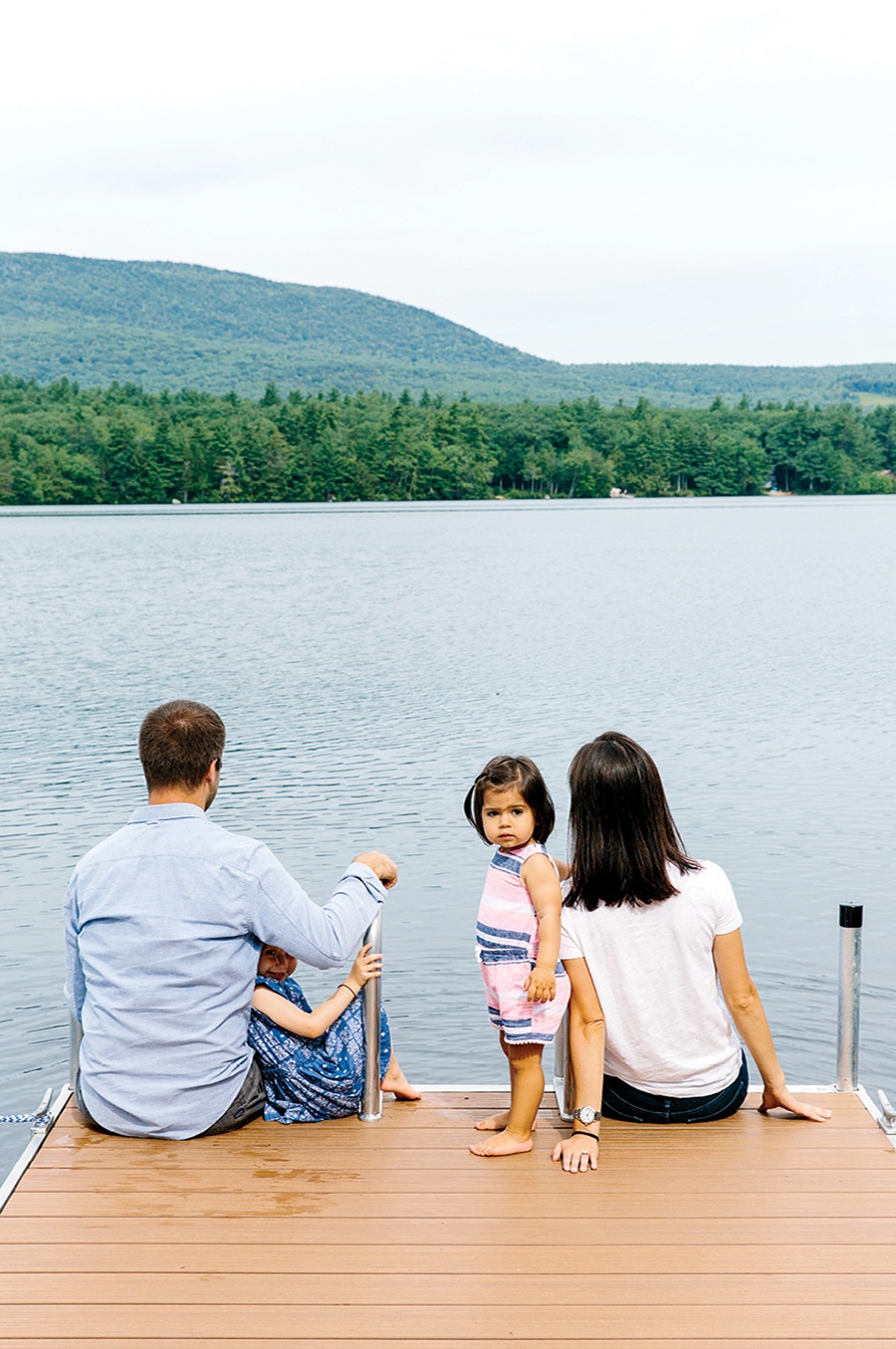 The family gazes at the pond and surrounding woodlands. / Photograph by Sean Litchfield 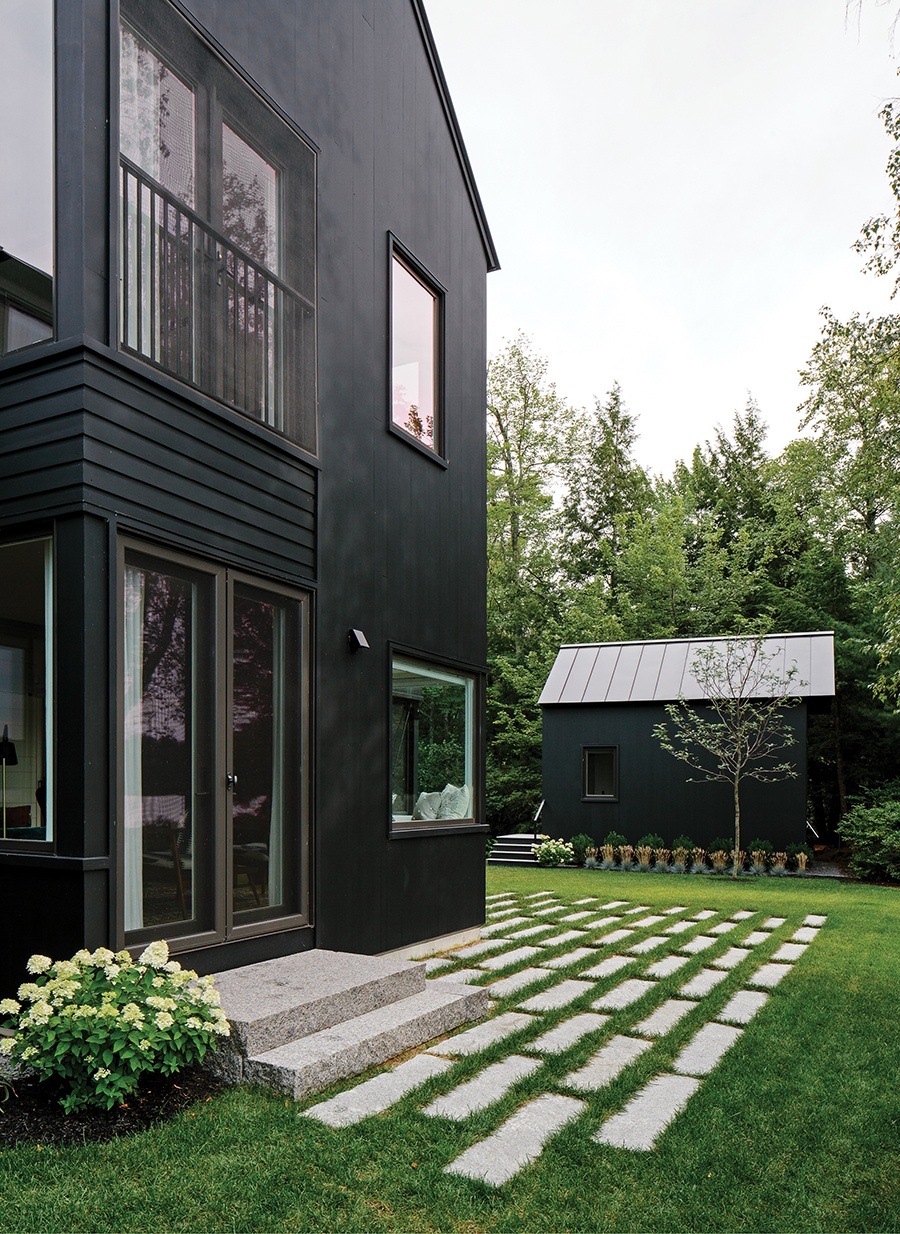 Rossi, who designed the landscaping along with Ryan Keiper from James Dixon Architect PC, used green and white plantings to create a modern feel. / Photograph by Sean Litchfield 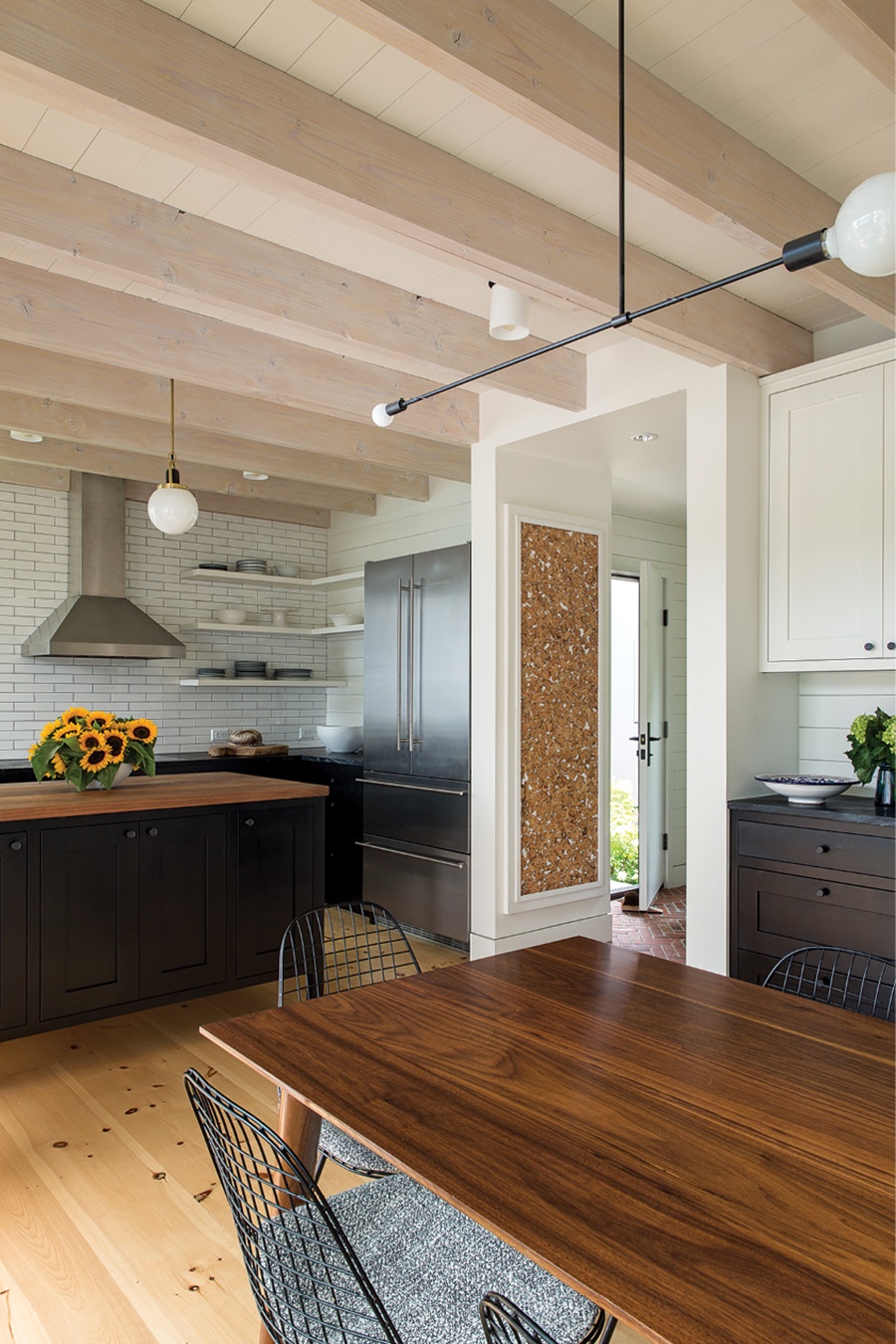 Made from AmCork “White Sea” cork wall tiles, a custom corkboard graces the passageway between the mudroom and kitchen. / Photograph by Sean Litchfield 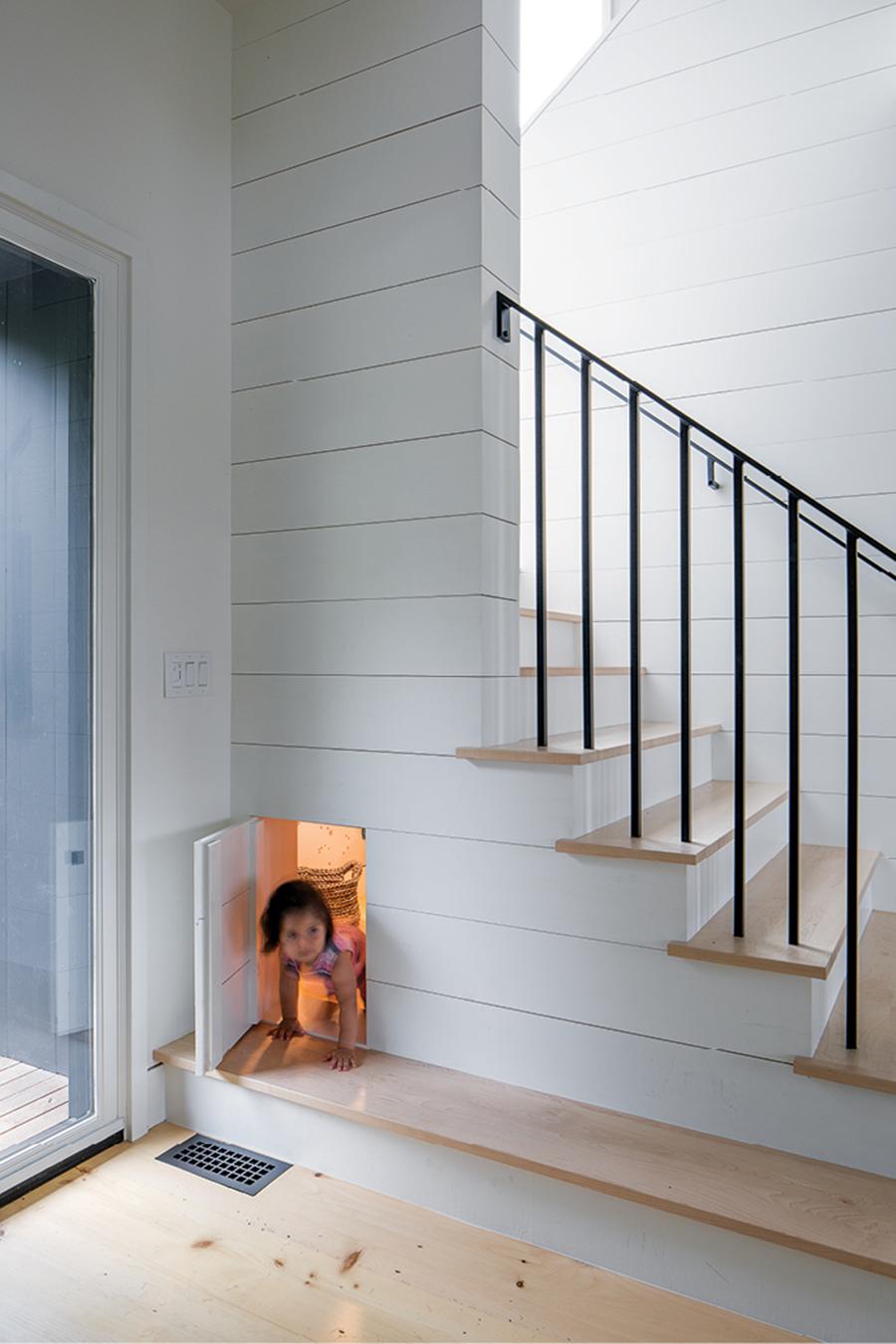 The stairway features a hidden play space for the couple’s daughters. / Photograph by Sean Litchfield 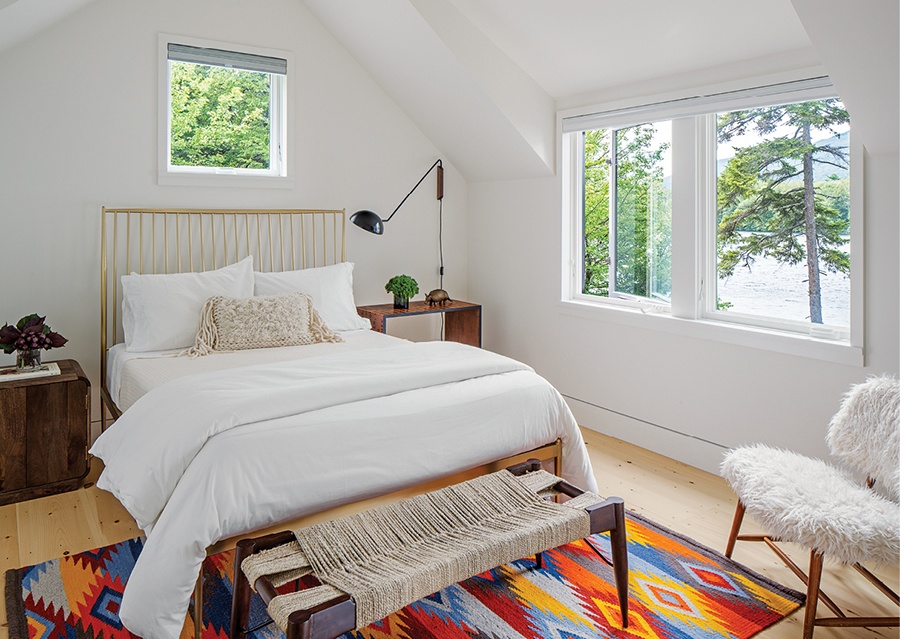 Reupholstered in faux sheepskin, a vintage chair from the wife’s grandmother sits in the corner of the guest room. / Photograph by Sean Litchfield 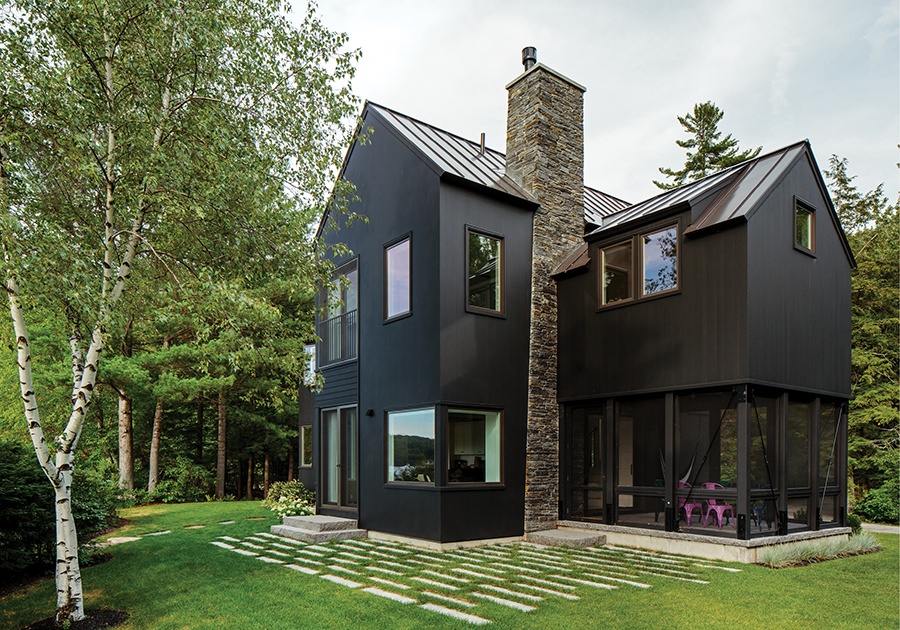 Because zoning laws did not allow for a solid-surface deck, the architects set long pavers of locally sourced granite in the grass. / Photograph by Sean Litchfield