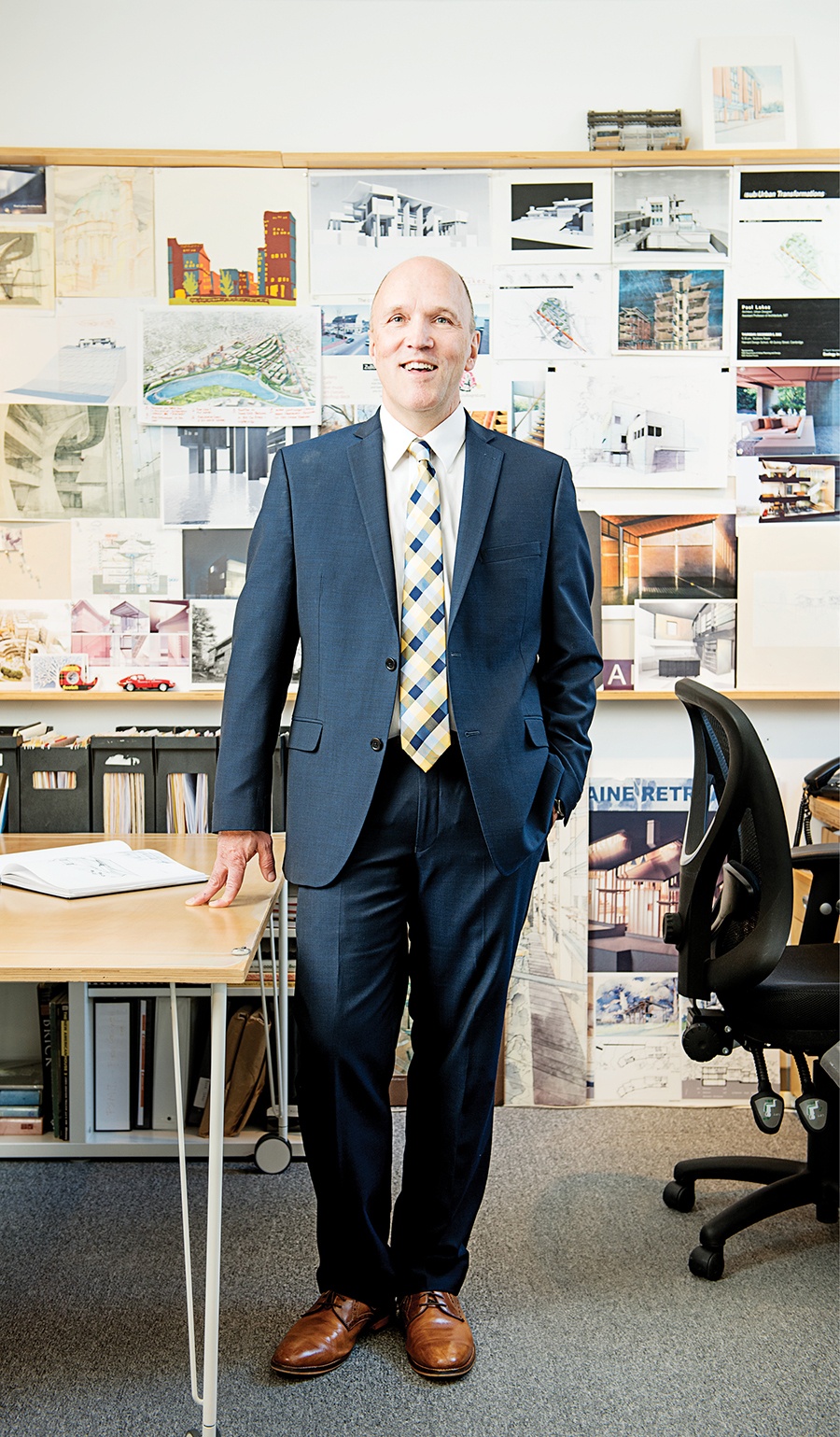 The bad news: Global sea levels are rising, and scientists say Boston and other East Coast cities are poised to take the brunt of the impact. The good news: The team at Paul Lukez Architecture has a plan. Devised in collaboration with an international cohort of ecologists, engineers, and other multidisciplinary professionals, the Somerville-based firm’s proposal—which calls for a dramatic overhaul of Dorchester’s vulnerable Columbia Point neighborhood—won top honors at the World Architecture Festival in Berlin last November. Here, principal architect Paul Lukez breaks it down.

Tell us about your idea.

We wanted to explore how new technologies could be used to build, or retrofit, cities in the future. If you think about the failure in New Orleans during Hurricane Katrina, one of the major dykes collapsed and devastated multiple parishes. The Dutch model, which inspired our proposal, is a little different. There are larger districts, but more often than not, they’re broken up into smaller, incremental units. If you look at a plan of Amsterdam, for example, it was built block by block, building by building. I spent nine years living in Holland as a kid. And Holland, of course, is full of canals and they’re very good at managing the flow of water. In some ways, our project does the same thing. Much like the urban blocks that comprise the Back Bay and the South End, this proposal calls for creating a similarly scaled neighborhood with one caveat: that each block generates more than 100 percent of its energy needs through various renewable sources. To do this at Columbia Point, we propose creating a canal equipped at each end with state-of-the-art hydro-turbines, which harness tidal changes and storm surges from rising sea levels to produce net-zero energy. So it doesn’t matter if there’s a catastrophic failure down the street because each block will be self-sustaining. It will have the ability to control water, and also produce its own energy. The idea is to work with the water, but in an intelligent way that uses both engineering and natural systems.

And by the way, our proposal is not just about hydro: It’s also about solar and integrating geothermal and wind. You can’t get to zero energy just using one system. It’s typically very hard to do that, unless you’re in the Southwest and you’ve got lots of sun and lots of roof space. That’s why each of these blocks and parcels would have a different equation of how they would get to zero.

How did this proposal come about?

The old Boston Redevelopment Authority [now known as the Boston Planning & Development Agency] put out an international competition for ideas about what could be done to address climate change—specifically, rising sea levels—on three sites in Boston. It was called “Living with Water.” I saw it and said, “Oh my gosh, we have to do this.” We’re very interested in sustainability, ecological and otherwise, and it’s an area of the city that we think needs a lot of work and attention. We were nominated as one of the finalists but didn’t win the Boston competition, which was okay. It was just a great process. We’ve since submitted the proposal to other international competitions, and we’ve won multiple awards. We feel like there’s some latency to this idea, and we want to find ways to bring it to a wider audience and see if it’s applicable to other sites, other communities, other places around the world.

Why do you think this proposal has resonated with so many people?

I think it’s a couple of things. One is it looks at climate change not as “Here’s a problem, let’s figure it out from an engineering point of view or a policy point of view.” I think it goes back a step and asks, “How do we make our cities, and how can we make better cities?” All buildings, all cities, all blocks that are being built from here on out should be aware of climate change and should be addressing it in some way. How can we create cities that actually will be with us not for 10, 20, or 50 years, but for centuries? I think people are also responding to the idea that addressing climate change should be a multidisciplinary effort: It’s not just about architecture or urban design. It’s about ecology. It’s about engineering. It’s about finance and venture capitalism. These are multipronged problems that need to be addressed in creative ways. I think we live in a culture today where people want to collaborate, so the role of designers or engineers is to bring together teams and find ways of making these ideas real.

What are the challenges to implementing ideas like this in Boston?

There needs to be a certain level of buy-in. Think about the iPhone. Apple had something approximating it when John Sculley was president of the company. It had some of the same elements as the iPhone, but the market wasn’t ready for it and it wasn’t packaged right. You see this with electric cars, too. More people are starting to use them, and it’s getting to a point where people are like, “Yeah, I get that idea. It’s cool. I would love to be seen in that car.” And that’s actually where design comes in.

Also, like with any idea, it has to be scaled appropriately. There would have to be some prototypes. And right now, because we’re in a boom period, there’s so much pressure to capitalize from the opportunities that are happening. A project like this, which admittedly would take longer, is not as attractive to the private sector. That being said, there could be smaller projects. I think the market is getting smarter and smarter and demanding that things be sustainable. The big challenge is also dealing with utilities. We’re getting mixed messages from our leaders about what the utility policy should be. And this is where Massachusetts—because of all the expertise we have in the state, with great designers and engineers—can take the lead and show how it can be done.

As a state, how are we doing?

I am very proud of our profession. There are a lot of leading firms moving full steam ahead and working hard on these issues. We’re very happy to have been able to participate in this project and be part of that conversation. I think there are a lot of institutions that are interested in it and, because the price of solar has come down so much, I don’t see any reason why we can’t do it now. Why shouldn’t we be demanding that all of our communities in Boston, in Massachusetts, become zero-energy by some reasonable time and date? There’s huge opportunities for engineering and technology development embedded in these ideas. And our city grew out of the harbor. We were always inextricably linked with the water. Why not make the most of that? Long Wharf is flooding. Every time there’s a high tide, this should be first and foremost in our consciousness. We need to do something now. We can.