From Blue-Collar Enclave to Million-Dollar Condos

Mel King: I grew up in the New York Streets area of the South End, which is near where Ink Block is now. One of the important aspects of it was that there were 30 or so different racial ethnic groups. Back when I was in college in the 1940s, I got a letter from my folks saying that we lived in a slum and that urban renewal had come and they had to move from the neighborhood. And so they moved to Lower Roxbury.

Steven Cohen: I was not a pioneer. When I arrived to the South End in the early ’80s, I was part of a group of people who were coming in, restoring brownstones, and bringing businesses and vitality back to a neighborhood that once had it. After all, the South End was still a place—which it very much is not now—where those of us could live who couldn’t afford and wouldn’t have fit into other more-developed neighborhoods of the city. It was the gay community, the arts community, bohemian types, creative types, who often self-select the neighborhoods that have potential. The beauty of the South End is that it’s been wave after demographic wave, you know, over more than a century. 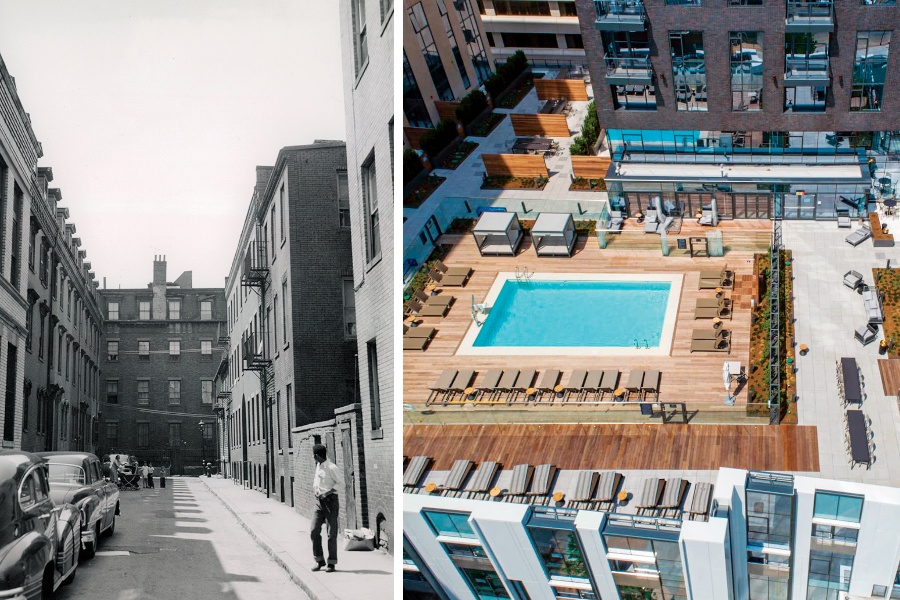 MK: I got a job working at one of the housing settlements on Rutland Street, where I did some work in challenging the city. In 1968, we organized and fought against the city because they had committed to not moving people out of their homes until they had a place that was built for them. But the people were being displaced—we looked up and found they were on the street there, being kicked out. We took over a parking lot to stop demolition without relocation and one of the drivers drove his car and knocked me down. A big fight erupted. We got arrested and went to court. We found out in the process that the city was violating the urban renewal law, which said that they had to have an elected committee from the neighborhood that made the decisions about what was going to go on. And we held the election and we won. That’s how the Tent City development, and a lot of other places, got to be built, with access for different levels of income.

The Cost of Living
Remember the days when college was affordable and you could buy breakfast for 7 cents? Yeah, neither do we.

SC: We’ve had to be sensitive to stakeholders from different sectors all having a seat at the table in the South End. It’s far less homogeneous than the Back Bay or Beacon Hill.

MK: There are people who make statements as if these folks with limited incomes are not here and making a great contribution to the community. Yes, some of the businesses that are on Tremont Street, Harrison Avenue, and Washington Street cater to folks who’ve got more money and income, but that’s not everybody. I said to some of the white folks who live on Upton Street, “How come you’re not walking one block and enjoying the great music and food that’s in Villa Victoria?” during their weekend festival one time. Well, it has more of a black and brown kind of attendance, with some white folks who come. “How come you don’t go around?” I’ll ask. “It’s right next door! The music’s good. The food’s good.”

SC: One of the dynamics playing out in the South End is that the empty nesters and their children are literally competing for housing. They are having the same American Dream at the same time and it is the children’s “fault.” They are supposed to be going to a leafy suburb and they are not having it. It’s the empty nesters’ turn to rotate in, but the thirtysomethings are doubling down and wishing to stay as well. That’s creating the demographic perfect storm that is exerting so much pressure on the neighborhood.

MK: The man in the building next to me sold his home for over 2 million bucks. We live in a capitalistic society and wealth is a religion. I’m not pessimistic, though, because there are still people around who are concerned about access. Because of what we were able to do, for example, there’s access to housing in the Fenway for people with limited resources. It started spreading out from Washington Street, Tremont Street toward Huntington Avenue. And so there are people in those areas now who wouldn’t have been there if they hadn’t learned from what we did, learned what they had to do in order to make some places more accessible.

—As told to Madeline Bilis