Small updates give a dated kitchen and dining room a fresh look. 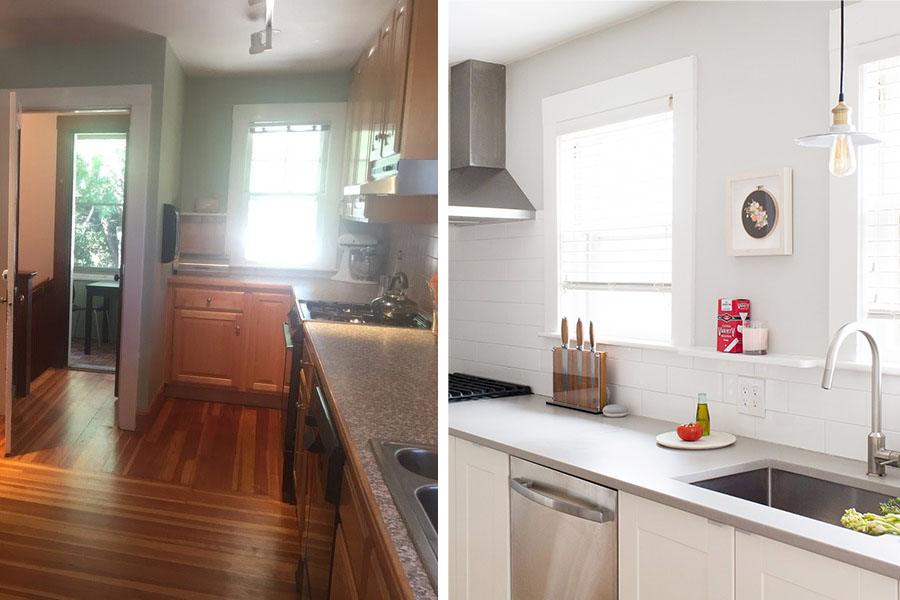 “Before” photo by Veronica Velasquez / “After” photo by Meredith Perdue

Drab and dated, the kitchen in this 1923 Jamaica Plain townhouse featured moss green walls, a square pink backsplash, and engineered wood cabinets with a faux wood finish. It connected to a lackluster dining room via a narrow doorframe and a small kitchen pass-through, which left both rooms feeling cramped. Still, the historical home caught the eye of Brent Gentile and Veronica Velasquez, who had been looking for a facelift-ready space that they could make their own. “Being our first home, we didn’t want to tackle a gut renovation right out of the gate,” Gentile says. “We were looking for something that needed a refresh but had a workable layout and some character to it.”

After purchasing the house, the couple planned a series of minor-but-mighty cosmetic updates that would open up and modernize the space. “It was kind of quirky and we just saw very small things we could do that would make a big difference,” Gentile says. The pair, who started their own Brooklyn-based design studio in summer 2017,  say they’re admirers of minimalist interiors, but at the same time, wanted to preserve some of the home’s original details, such as the baseboards and the crown molding. “As much as we love a white box space, we really wanted to maintain that craftsman-style detailing. It’s so beautiful and adds a really nice contrast and story to the home,” Gentile explains. 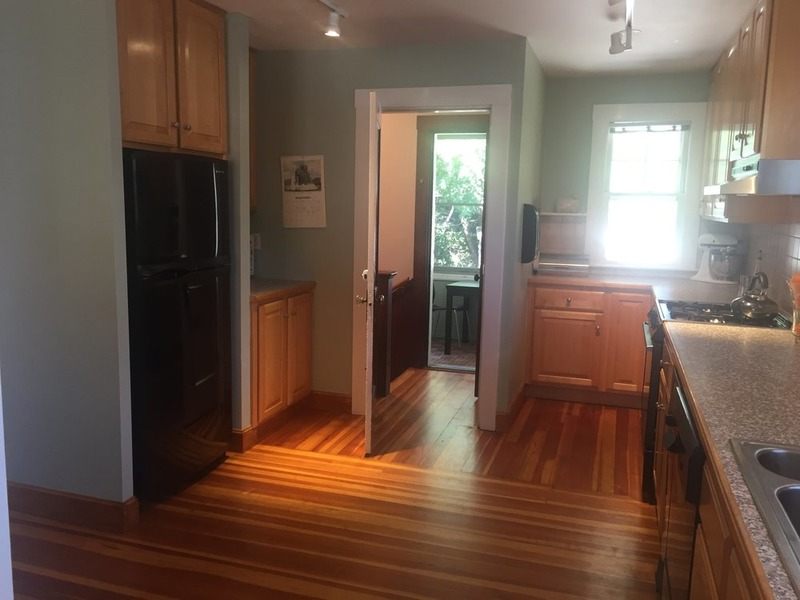 The kitchen before the renovation. / Photo by Veronica Velasquez 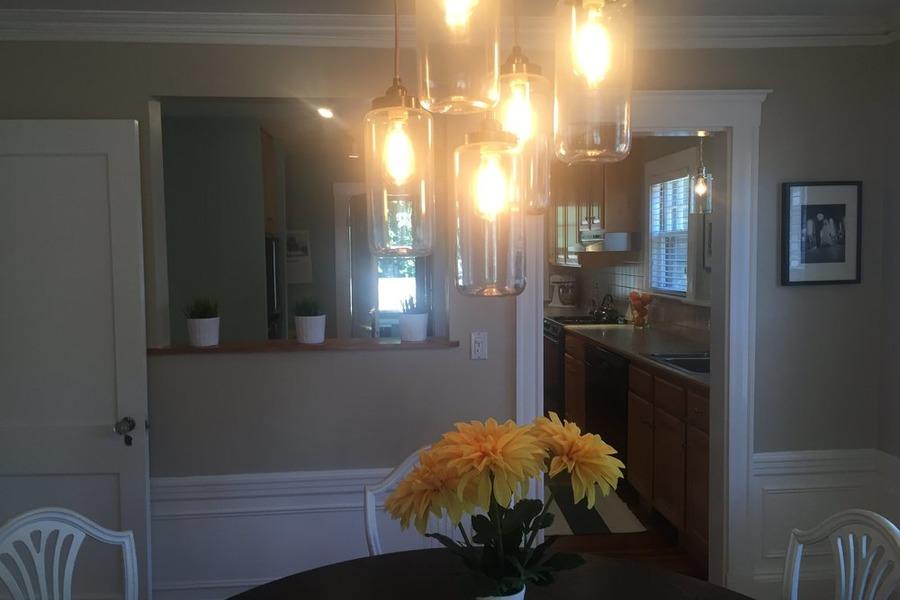 The view of the kitchen from the dining room before the renovation. / Photo by Veronica Velasquez

Maintaining the historical detailing wasn’t without its complications: Like most nearly century-old bungalows, the walls were slightly crooked, so Gentile says it was more of a challenge to fit the molding properly. Equally difficult was sourcing trim to match the house’s original baseboards, casings, and crown molding, but Gentile and Velasquez were eventually able to track this down with the help of Cambridge millwork manufacturer Anderson & McQuaid Co. They were also careful to maintain other details within the house, like a narrow shelf that runs between the windowsills above the counter. Likewise, in the dining room, they kept a wooden built-in corner cabinet and gave it a fresh coat of paint.

Then came the larger aesthetic changes. To open the kitchen up to the dining room, the couple widened the service window and removed the wall that separated it from the doorframe. They also fashioned a breakfast bar, outfitted with Tolix Marais counter stools. “It made both areas feel so much bigger, and the flow so much better. Before, if you were cooking you couldn’t really talk to anybody in the other room,” Gentile says. “Adding the bar really made this a real center of the home.” To maintain this new airy, open-concept feel, the couple chose a neutral color palette and minimalist furnishings, including the dining room’s sleek CB2 marble-and-brass table and timeless solid wood side chairs—designed by Josef Hoffmann—from Design Within Reach. The revamped space also includes an eye-catching School House Electric light fixture—the finishing touch on the month-long renovation. 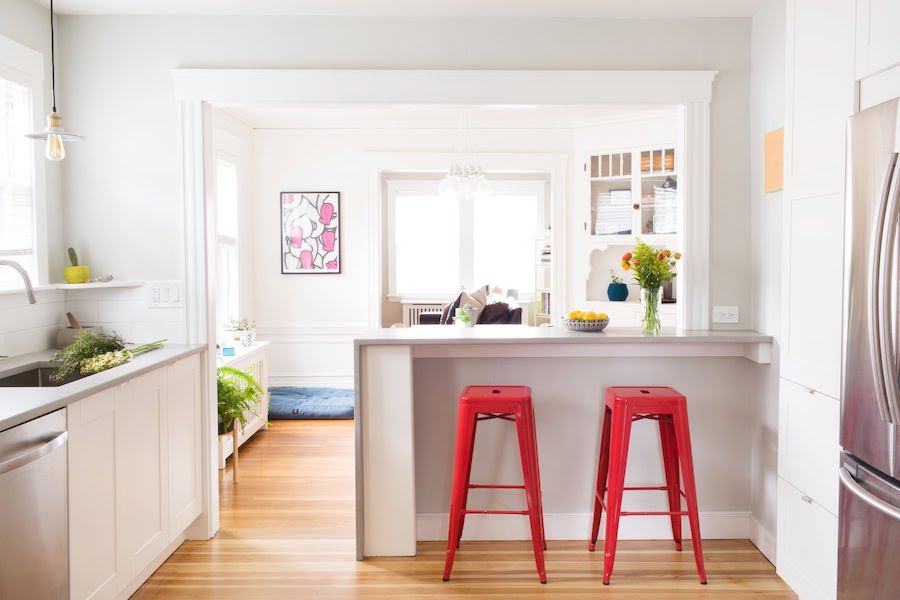 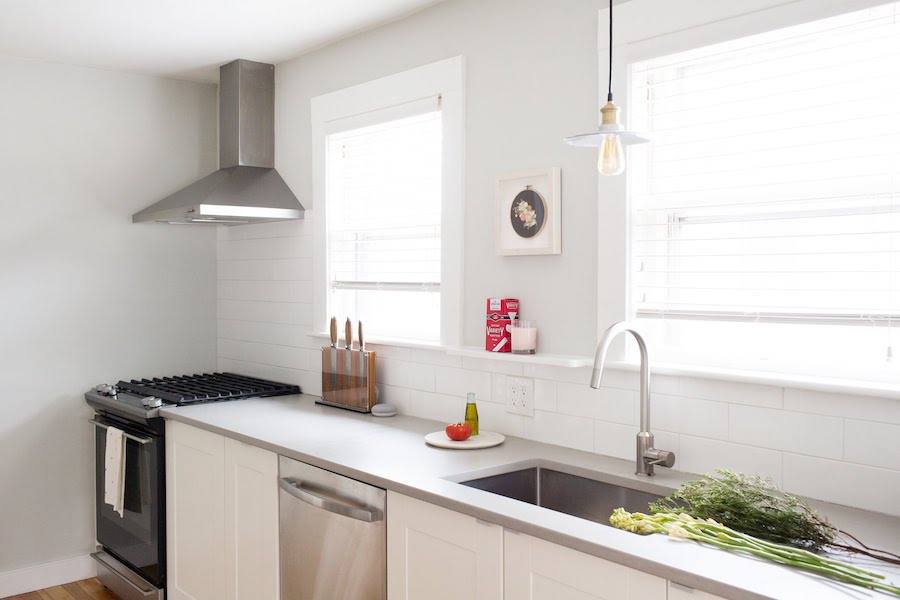 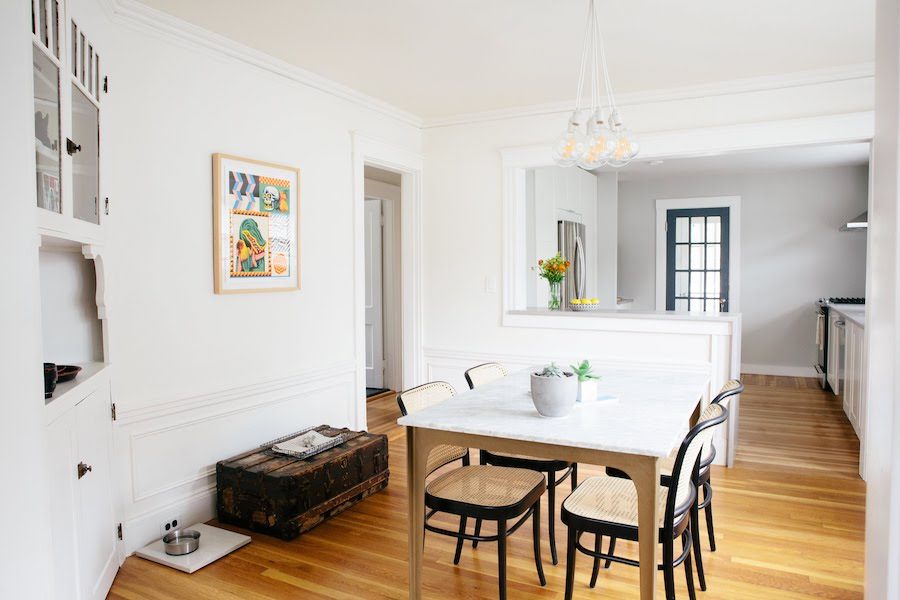