Smith opens up about her recent NYCxDesign Award win and the opening of the creative community space. 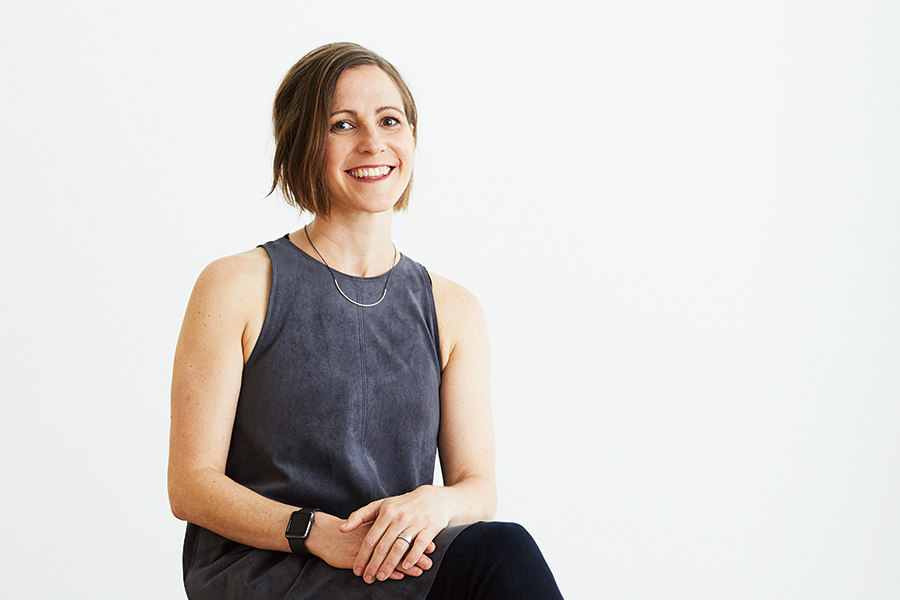 As a professional designer, Kelly Harris Smith has worn many hats. She’s sketched interiors alongside architects at Boston’s Machado Silvetti; dreamed up handbags and homewares as the founder of Etcetera Media; and masterminded innovative felt products as the co-creator of FilzFelt. Now, 15 years into her career, the Northeastern grad—and 2018 NYCxDesign Award winner—dons the cap of what may just be her most important role yet: teacher. This past May, Smith opened the doors to Minni, a new design-focused children’s art studio in the South End where budding creatives can take classes on everything from playground planning to classic calligraphy.

Tell us more about Minni.

You should write down our messaging—I’ll read it to you: “Minni is a creative community space run by professional artists and educators. We empower little ones to design great things.” So, we do have some toddler classes, but our focus is [programming for kids ages] four to 10. We’re trying to do things that are design-based—furniture design for dollhouses or fashion design and wearable art, for example. We have a class called MinniDesigners Toy Factory right now. We’re also doing things with graphics, so stenciling and lettering. And the other thing with Minni—and I’m trying to make a point of this—is that our instructors are designers, professional artists, and art educators. They’re not just babysitters. We have a mechanical engineer who’s a woodworker. We have a set designer for theaters. We have industrial designers and fashion designers. People from various disciplines.

Why the focus on design?

For me as a kid, I did sports and I was creative, but ideally I would have gone to art school had I been given the choice. I went undecided to Northeastern and then switched to architecture my first year. But I didn’t learn about industrial design until I was probably in my mid-twenties. And I think had I known that it was a career or a thing that people do, maybe I would have studied something different. Everything in this studio—this tape, how somebody put it on a roll—was designed by someone, and I think people take that for granted. And the South End has so much to offer: We can expose children to its studios and galleries in a way that they haven’t before, and then they can feel inspired to do something with that experience.

Speaking of inspiration, where did the idea for Minni come from?

A few years ago, a friend of mine who is an art educator mentioned that she wanted to open her own studio sometime, and I think that got the wheels turning in my head a bit. There are other art studios and programs for kids, but none with a real design emphasis. I ended up getting on a waitlist for space here [on Thayer Street] because I knew I wanted to be in this area. This space opened up, and while I was designing it, the space next door opened up, too. And it just made for a much nicer experience. It’s doubling the rent and the space size, but also quadrupling the programming we can offer. Plus, I can move my studio here.

Right! Let’s talk about that. How did you transition from architecture to product design?

I was working at Machado Silvetti in Boston when I started sewing things on the side. That turned into my first business, Etcetera Media, which centered on the bags and accessories I made from this wool felt I was getting from Germany. And then that turned into FilzFelt a few years later. When I first started that company, it was similar to what I’m doing with Minni: I did it to fill a void. I saw there was something in the U.S. that didn’t exist, so I started importing that wool felt and my business partner and I began making products—hanging panels, rugs, wall coverings—geared toward interior design and architecture applications. I think the felt material really took me from doing one thing to another.
A few years in, Knoll approached us and ended up acquiring FilzFelt. I stayed on for a little over five years as creative director both for FilzFelt and Spinneybeck, which is Knoll’s leather upholstery company. And then in 2017, I left to start my own thing. I’m an independent designer now and a consultant for furniture and textile companies. I’ve also started designing products in other materials, like glass.

You recently won a 2018 NYCxDesign Award for your “Button” ottomans. What can you tell us about them?

I submitted the ottomans for the Emerging Product Designer award because I was showing them at NYCxDesign’s WantedDesign exhibition in May. I knew that I was doing a show and I’d been wanting to get out of my comfortable material—which is felt—and diversify.

It’s a funny story. I was pitching some products—specifically some mounted, partial-circle screens that could be used as desk dividers—to a manufacturer, and one of the people in the meeting said, “Oh, that kind of looks like a pouf or an ottoman.” Nothing ever happened with that company, but I ended up doing drawings for the ottomans and was like, “You know what, I’ll just make them and see what happens.” So now I think I have a couple of manufacturers that are interested in producing them.

The ottomans are made from recycled materials. Has sustainable design been a constant throughout your career?

I think so. As a kid in high school, I took old clothing and made it into new bags and hats and things like that. So it started at a very young age, and continued with the felt being 100 percent wool and Spinneybeck’s leather being a natural byproduct from the meat industry. There are so many things that get thrown away that could be used. I’ve been talking with a cork company in Portugal about combining cork and wool remnants to make a new material. In the manufacturing process, there are tons of scraps that just get thrown out, and those are still good materials that could be used. There are some companies now, especially in Europe, that are doing more with recycled materials, but I feel like there’s a lot still to be explored. I try to incorporate those ideals into what we are doing here at Minni, too, as much as I can. I mean, kids really like glitter, but I know it’s terrible for the ocean. We have a lot of recycled-cardboard projects.

You and your husband, architect Chris Grimley, have two children. Are they creative, too?

Absolutely. It’s a little bit terrifying. They blow my mind sometimes with what they can do and what they see. I built this space for them, basically. We live in a pretty small condo down the street, and we’re never moving out of it [laughs]. This is their art studio and their living room. They love coming here: We’re open to the public on Sundays, so they’ll come and hang out with other kids and families. It’s their spot.

Will Minni be your primary focus now?

I have a couple design projects that I’m working on as well. But the goal for Minni is to expand outside the studio and partner with community centers and libraries. We’d like to work with underserved communities and send instructors to schools that can’t afford this programming. I’m looking into starting a scholarship fund or applying for grants to support that. I feel really passionate about Minni, that this needs to exist. And if nobody else is doing it, I’ll do it.