Transformation Tuesday: A Bland Bedroom Gets a Bold, Modern Makeover 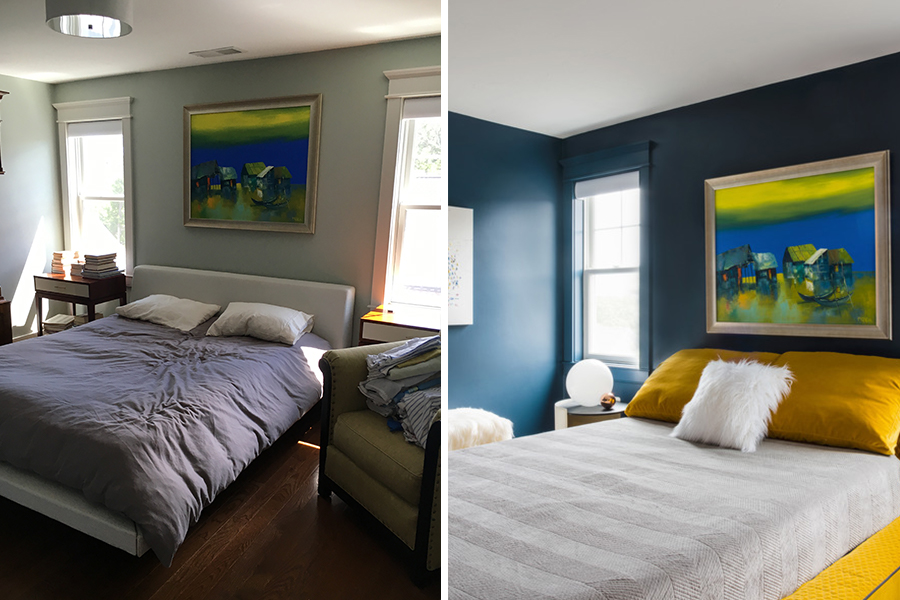 When a young tech industry professional reached out to Gabrielle Pitocco and Michael Ferzoco of Eleven Interiors for help revamping his Needham townhome, he wasn’t looking for a complete structural overhaul: He just wanted to be “wowed.” The homeowner had worked with the property developer to customize the home when he first moved in, but six months later, the master bedroom, the guest bedroom, and the living room still lacked personality. The guest room was particularly uninspiring. “It didn’t say anything about Dan or about his personality, and I think that was something that was important to him moving forward,” Pitocco says.

The colorless space was furnished with mismatched pieces that the homeowner had purchased over the years or had inherited, such as a grandfather clock that had personal significance to him, but didn’t suit his modern tastes. The scale of the pieces in the room was also imbalanced. The bed was low to the ground and flanked by oversized wooden nightstands. Making matters worse, a large armchair occupied the full width of space between the bed and the right wall. Pitocco says the first step to achieving a space that would impress Dan’s guests for the right reasons was “just taking all of that away.” 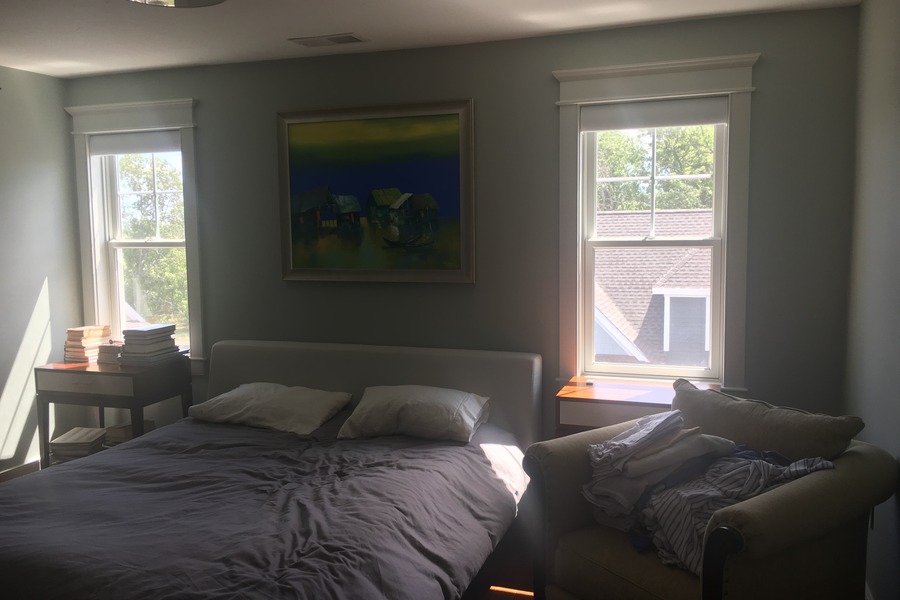 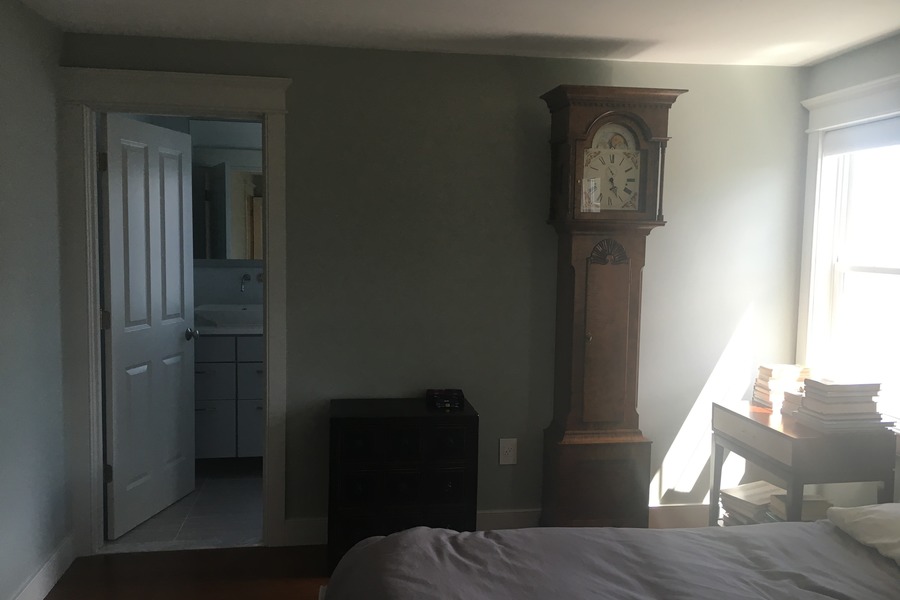 One of the first things the homeowner told Pitocco about his vision for the guest bedroom was that he wasn’t interested in function: He simply wanted to fill the room with show-stopping pieces. “It really was about creating an art gallery via furniture for him,” Pitocco says. “We wanted to modernize it and put the focus on the pieces in the room.” To allow the furniture to pop against the walls, Pitocco and Ferzoco chose a “moody” paint color, “Gale Force” by Sherwin Williams. They also used the blue hue on the trimwork to further fade the architecture into the background and keep the furniture center stage.

With the color palette in place, the rest of the design began to take form. To address scale, Pitocco says they decided to make the bed the focal point of the room. The designers found a mustard-hued velvet upholstered bed by the Italian brand Bonaldo, which perfectly contrasts the blue backdrop. The bed’s brown trim and quilting also bring texture into the room, as do the two playful faux fur ottomans that sit beside it, in lieu of the original armchair. Next, to satisfy the homeowner’s focus on form over function, the team added leather and dark espresso walnut side tables from Camerich, which act as pedestals to showcase two spherical LED lamps from Flos. “They don’t look like lamps, they look like art pieces, and that was a focus for us—the unexpected,” Pitocco explains. The finishing touch on the space was adding a bit of sparkle. That came in the form of a Robert Abbey flush-mount fixture with a cluster of 25 globes, which Pitocco calls a piece of “jewelry.” 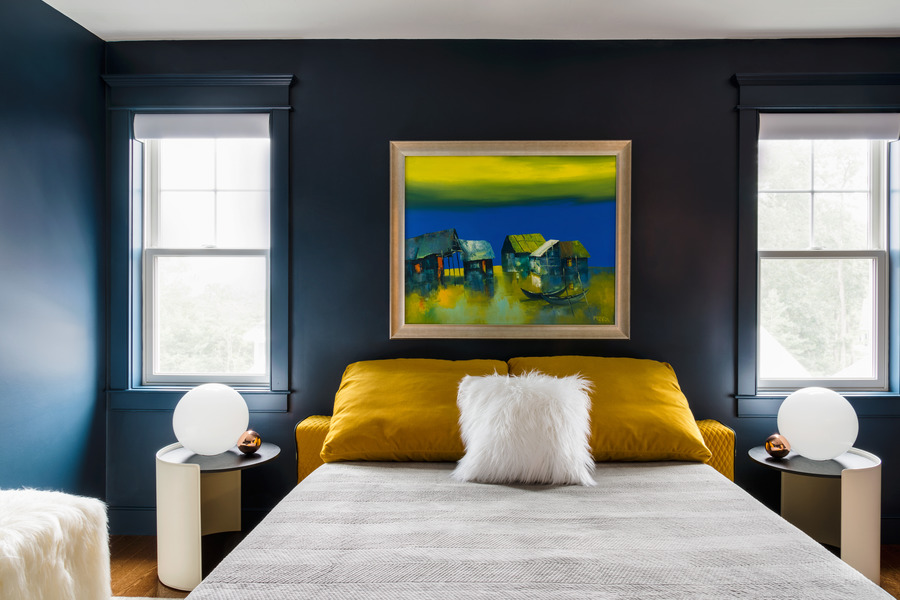 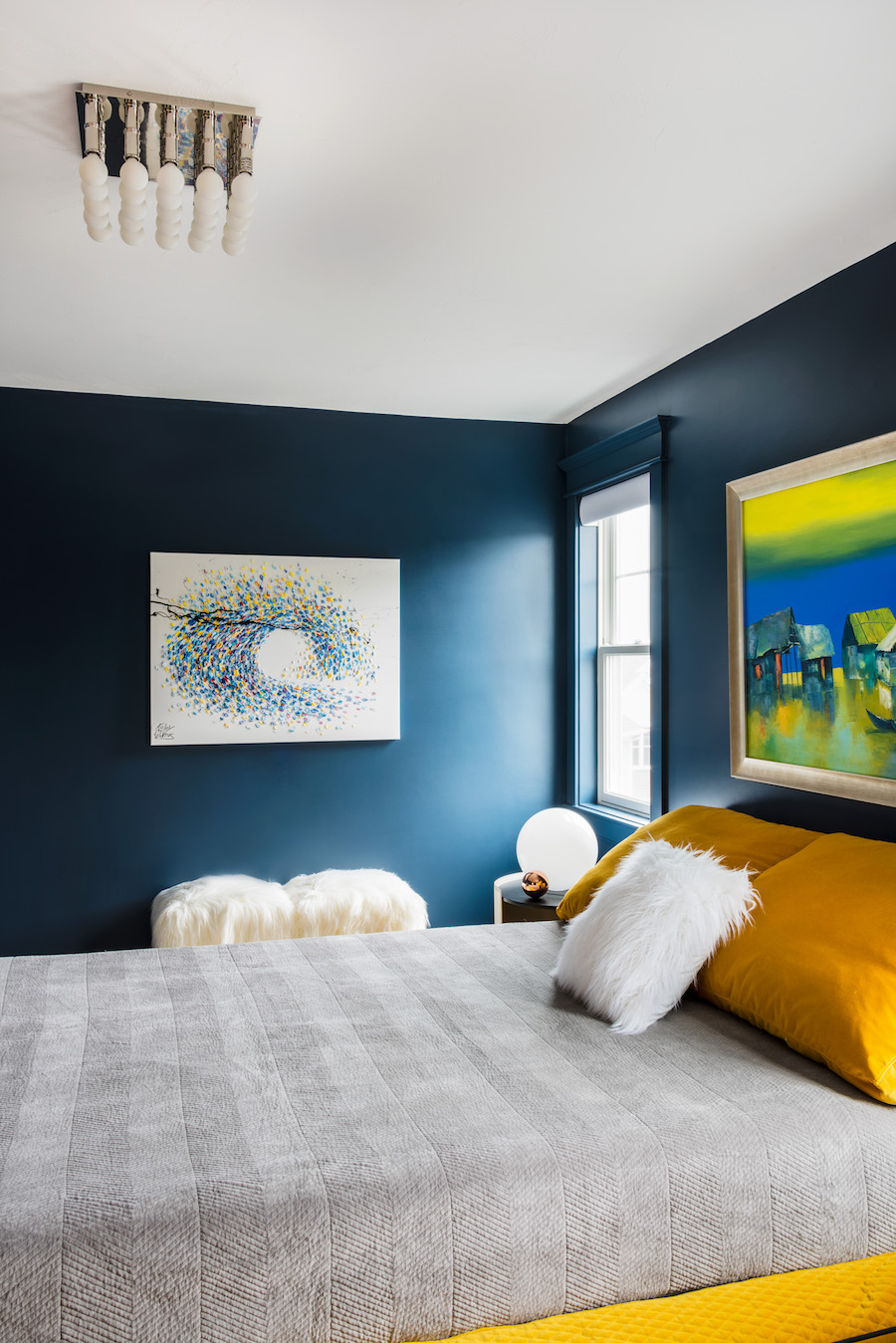 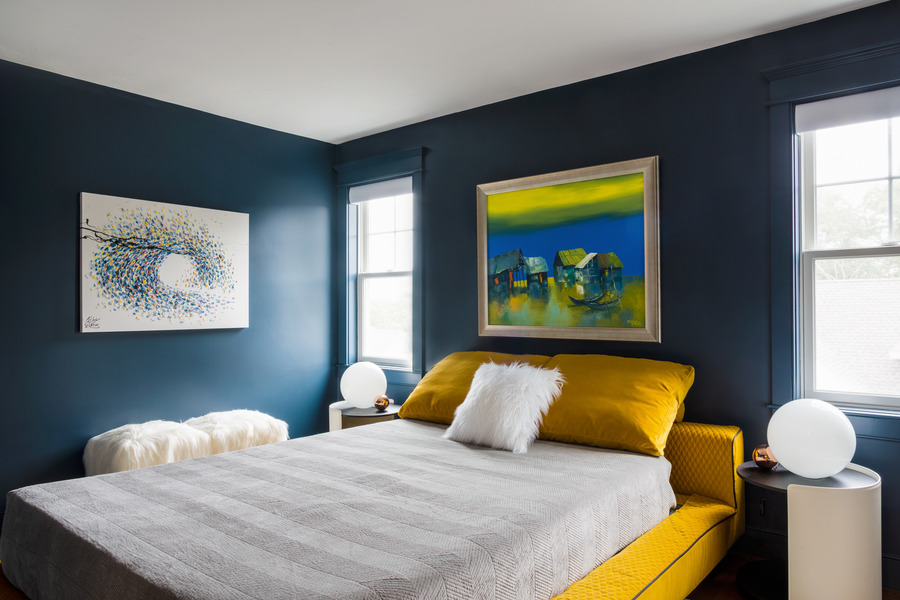