An Exclusive First Look at this Elkus Manfredi-Designed Law Office

A cutting-edge renovation is underway at Mintz Levin’s One Financial Center headquarters. 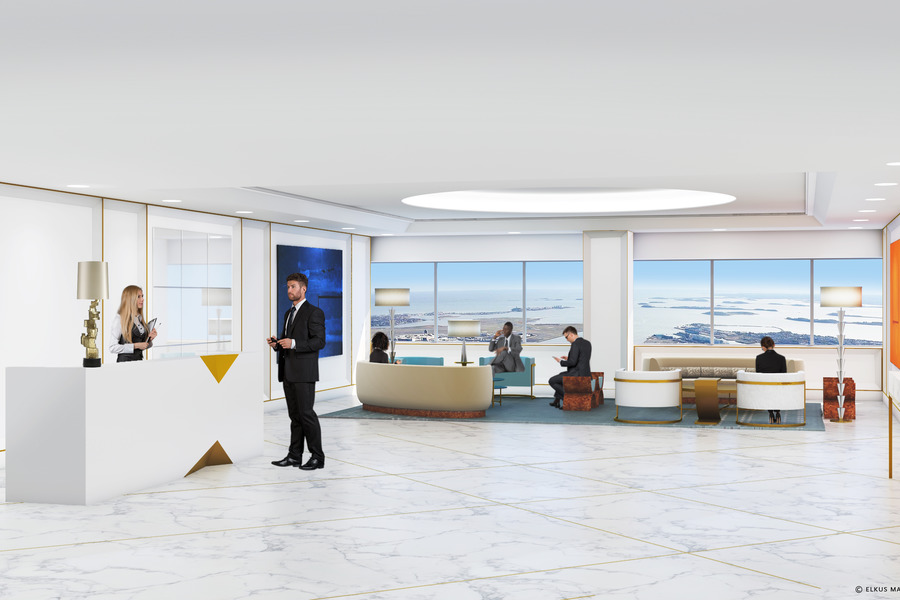 A rendering of the Mintz Levin lobby. / Courtesy of Elkus Manfredi

When one of the city’s high-power law firms, Mintz Levin, sought to redesign its offices at One Financial Center, naturally, they looked to none other than one of the city’s high-power architectural firms, Elkus Manfredi. Out of this partnership came plans for a cutting edge, 206,000-square-foot, 7-floor space designed to foster community and keep pace with a changing legal industry. “When you build these workplaces, you can’t just build them for the moment in time,” says Elkus Manfredi principal Elizabeth Lowrey “You’ve got to have a crystal ball because they’re going to live on for five, 10, 15, 20 years.”

The offices, which are under construction and will be completed by the end of 2019, draw on Elkus Manfredi’s experience with designing spaces for the hospitality sector. Those projects include the South End’s Ink Block apartments and Boston Landing, which houses the Lantera residences, Warrior Ice Arena, the Celtics’ new training facility, and New Balance’s headquarters. “We believe the workplace is really hosting the employee and their clients or guests,” Lowrey explains. To foster community, the plan features a variety of collaboration spaces in addition to individual workspaces, from meeting rooms to cafes designed to look anything but corporate. One is modeled after a 1930s luncheon club, and the other will be a more casual pub inspired by the restaurant Jacob Wirth. The space will also feature state-of-the-art, computer-modeled acoustics and advanced airflow systems that keep temperatures evenly regulated throughout the offices.

The first step in creating a forward-thinking law office, according to Lowrey, was speaking with the law firm’s employees about what the company’s future holds. After an extensive selection process in which Mintz Levin interviewed several other design teams, Lowrey says Elkus Manfredi was chosen because its designers got to know the law firm and its workforce inside and out. “We were curious about who they were specifically—not just what the industry was doing, but what they were doing in their own culture,” she says. 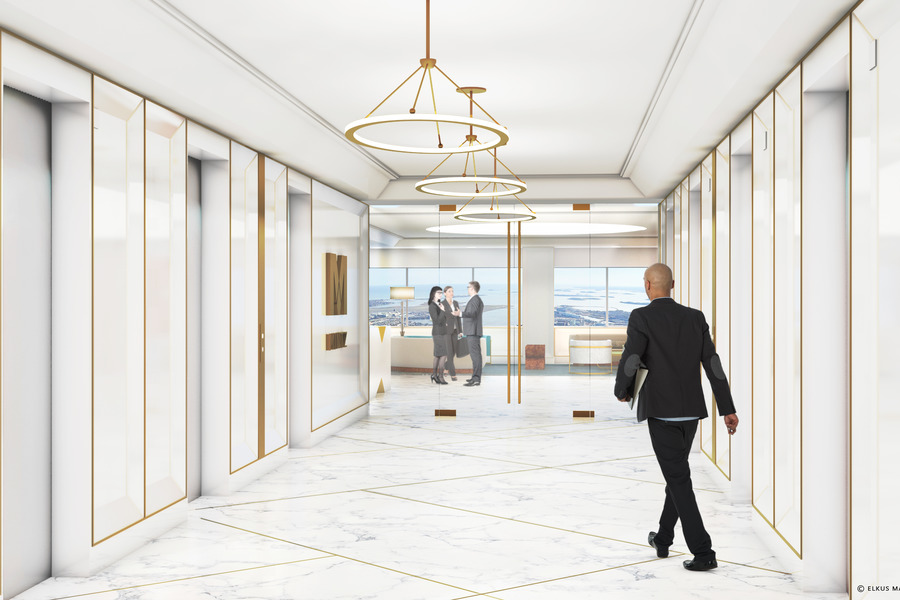 A rendering of the elevator bank in the main lobby. / Courtesy of Elkus Manfredi

Lowrey calls that investigative, collaborative effort between Elkus Manfredi, Mintz Levin, and its employees a “co-creation process,” and says it’s the most unique aspect of the project. It was also an effort that continued throughout planning stages, when specially created employee task forces weighed in on everything from what conference centers should look like to having sit-to-stand desks. Mintz Levin also built an extensive, full-scale model of the space, and invited all employees to critique it.

When it came to interior design, Lowrey says her firm is a big believer in the idea that “form follows function.” Her team reflected on the employees’ stressful, high-pressure careers, and sought to balance that aesthetically with what Lowery calls a “powdery feel” of the interiors, which are shown in newly released renderings. When employees and visitors enter the lobby, they’re met with beige mohair upholstered seating, and white oak open-grain woodwork. Likewise, the white Gioia Venatino marble floor in the lobby has a soft, matte finish, and the lacquer panels in the elevator lobby have a reflective quality that pushes light around the space. The softness of the space threads throughout the offices: Conference room walls, for example, are covered in a luxurious ultrasuede that offers high-performance acoustics.

To contrast the minimalist, modern feel of the space, the team infused it with art deco details, such as bold-but-simple millwork, brass hardware, and period-inspired patterns and finishes. It’s a throwback to the pioneering, early years of the law firm, which was founded in 1933. “They had such a great story in that period and so there’s a nod to their heritage,” Lowrey explains. “It’s a little bit romantic, while still being modern and forward thinking.”