Ori’s Robotic Furniture Has Landed at West Elm in Fenway

The Cambridge-based company's Studio Suite system is available to the public for the first time, and it could be future of apartment living. 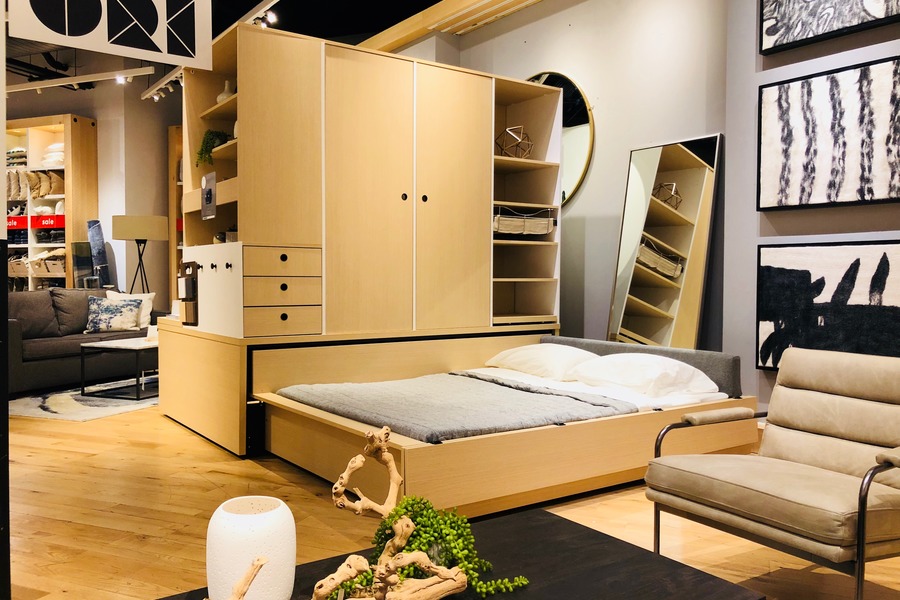 Studio apartments come with their own unique set of challenges, from the awkwardness of entertaining guests beside your bed to being unable to escape your significant other. Local robotic-furniture company Ori wants to change that with Studio Suite, a shapeshifting space divider that’s available to the public for the first time in a pop-up at West Elm in Fenway.

Able to transform from a bedroom to a walk-in closet to a living room and back again, the plywood unit effortlessly shifts, expands, and collapses each of its components with the push of a button on its interface. Users can also control the unit with the Ori mobile app, as well as through Amazon Alexa or Google Assistant voice commands. The system, which was born out of research from the MIT Media Lab, plugs into a conventional outlet and glides along a linear track taped to the floor. It’s designed for spaces ranging from 300 to 600 square feet, and uses robotics to challenge the idea that only large apartments can be functional. “Spaces are becoming smaller and more expensive, so we started thinking about how we could apply robotics to make spaces feel and act like they were much bigger,” says Ori founder and CEO Hasier Larrea.

When the Cambridge-based company launched Studio Suite as its first product earlier this year, it marketed the system to real estate developers in Boston and beyond. In the months following, properties like Continuum in Allston, as well as about 20 others nationwide, integrated Studio Suite into some of their units. Meanwhile though, Larrea says the company was receiving thousands of messages asking when Studio Suite would become available to the public. His team then came up with the idea to partner with West Elm and test offering the product directly to customers. “We got so many consumers asking about these that we thought it would be great to create an experiment in a real retail store,” he says. 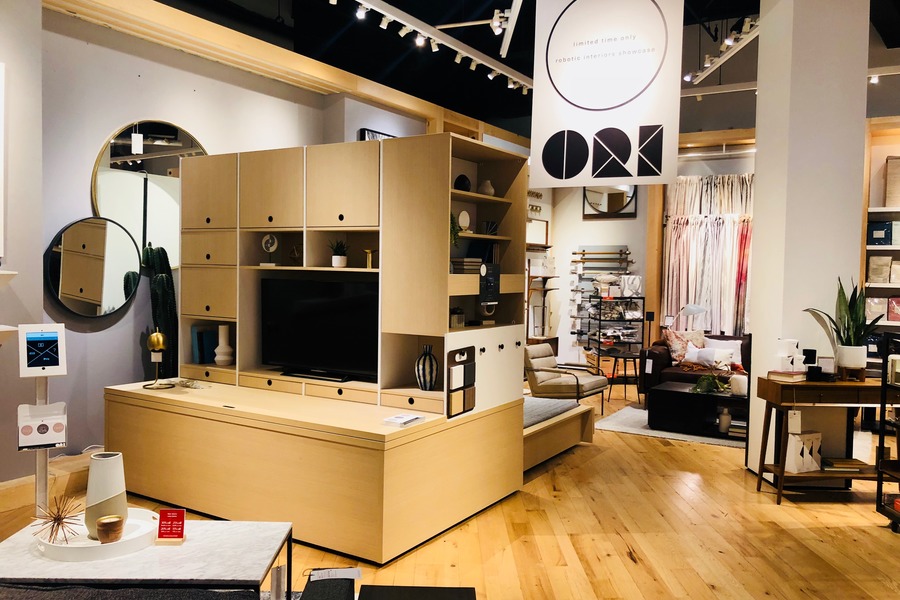 The Ori pop-up runs at West Elm’s Fenway location–where customers will be able to tap, touch, and talk to see the unit in action—through October 30. “We’re looking forward to having Bostonians drop by, play with it, and give us feedback,” Larrea says. “We’d love to have them be the first people to leave with one.” Available to buy in-store for a limited time, Studio Suite comes in full ($15,500) and queen ($16,000) sizes, and in light and dark finishes. Customers can also rent a unit, with prices starting at $300 per month.

After the pop-up ends, Larrea anticipates that the company will reveal additional robotic products designed to address small-space living. He says the products could range from solutions for even smaller apartments to designs for the master bedroom to systems for hotel rooms. “We’re trying to bring not just a product but a whole category to the market,” Larrea says. “We’re excited about the fact that this is just the beginning.”