Port Lighting Systems takes the city's skyscrapers and splashes them with color. 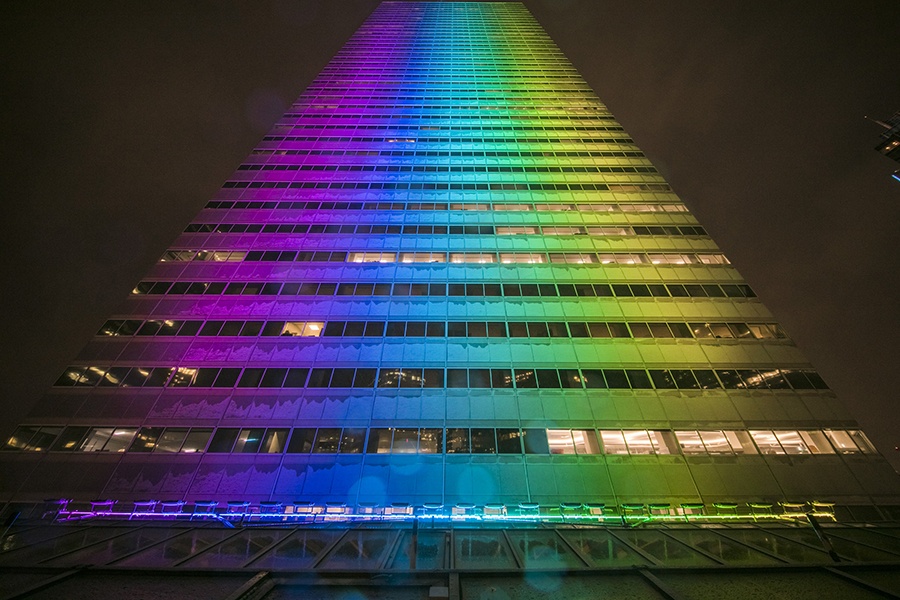 Last year around this time, One Financial Center looked like many of its neighboring skyscrapers at nightfall: fairly unremarkable. But now, take a stroll in through Financial District after sunset, and you’ll notice the building’s facade glows bright pink, blue, green, yellow, and sometimes rainbow.

While projecting light onto a building isn’t exactly newfangled technology, One Financial Center is the first full-face, color-changing skyscraper in Boston. The city, it seems, has been slow to catch on to installing architectural light shows on a large scale.

“I think a lot of it just has to do with being an older city,” says Ron Kuszmar, vice president of permanent systems for Port Lighting Systems, the company that designed and installed One Financial Center’s new nighttime look. “[Boston doesn’t] want to be New York or LA or Miami.”

But even New England’s purists are coming around. In 2016, exterior color-changing lighting was added to City Hall as part of the Walsh administration’s goals to “liven up City Hall and create a safer area for pedestrians.” Brutalist or not, the city’s landmarks may be beginning to see the light.

“Some people may think it’s too showy, or too much like Las Vegas,” says Todd Gerrish, owner of Port Lighting Systems. “But there are ways that it can be done, like we’re seeing now, where it looks tasteful. It’s not glitzy-looking and it highlights the building’s architecture.”

Gerrish founded Port Lighting Systems in 1985, working out of his parents’ garage to design lighting for concerts. Now, with offices and a warehouse in Seabrook, New Hampshire, architectural lighting makes up a large part of his business. While his company didn’t work on City Hall, it has installed the lights on the TD Garden, the Blue Hills Bank Pavilion, the Greenway carousel, the Zakim Bridge, and other bridges and structures across New England.

Designing and installing a lighting system can take anywhere between five and nine people to execute. First, a team of designers establishes a budget, then decides how the light will wash across the building—whether that’s uplighting from a ledge, installing fixtures on the roofline, or illuminating from the inside with the help of opaque panels in windows. There’s a host of external factors to be cognizant of “any time you’re just sort of spewing light out into the sky,” says Kuszmar. The team calculates how much light will spill into roadways and researches overhead flight paths for safety. Once an installation is complete, workers have to wait until night time to see the fruits of their labor.

“The summer can be worse because we can’t start seeing anything until 9 or 9:30,” says Kuszmar. “There were even times at One Financial when we were there until 2 or 3 in the morning. That’s because we had to work on off hours and weekends, but that’s always a fun challenge.”

What might surprise casual admirers, says Kuszmar, is how little energy the light installations use. One Financial Center, for example, requires a total of three 20-amp circuits to power its lights. “That’s three regular circuits in your house. So, if you had one per bedroom, that’s three bedrooms’ worth of power.” 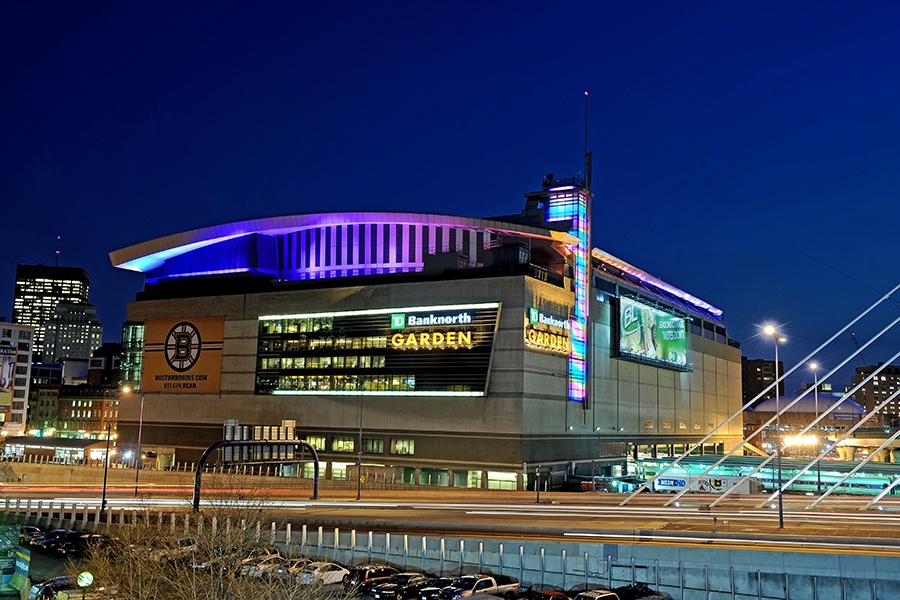 Port Lighting Systems’ display on the TD Garden is also color-changing—its roof and protruding tower fade to green during Celtics Games, gold during Bruins games, and to a tie-dye pattern during concerts. And at a project called Beyond Walls, Port Lighting set up rainbow-colored lights underneath overpasses in Lynn.

“It makes a dark, scary space feel safer,” says Gerrish. “[The lights] set a nice mood and atmosphere to make it more inviting for people to walk the city, making it more walkable and accessible.”

Gerrish says architectural lighting is versatile in this way—creating access, and at the same time, having an element of playfulness to change colors for special events.

“It’s about highlighting beautiful architecture and making it more inviting for people who are walking around or driving through Boston,” says Gerrish. “It just brightens the city.” 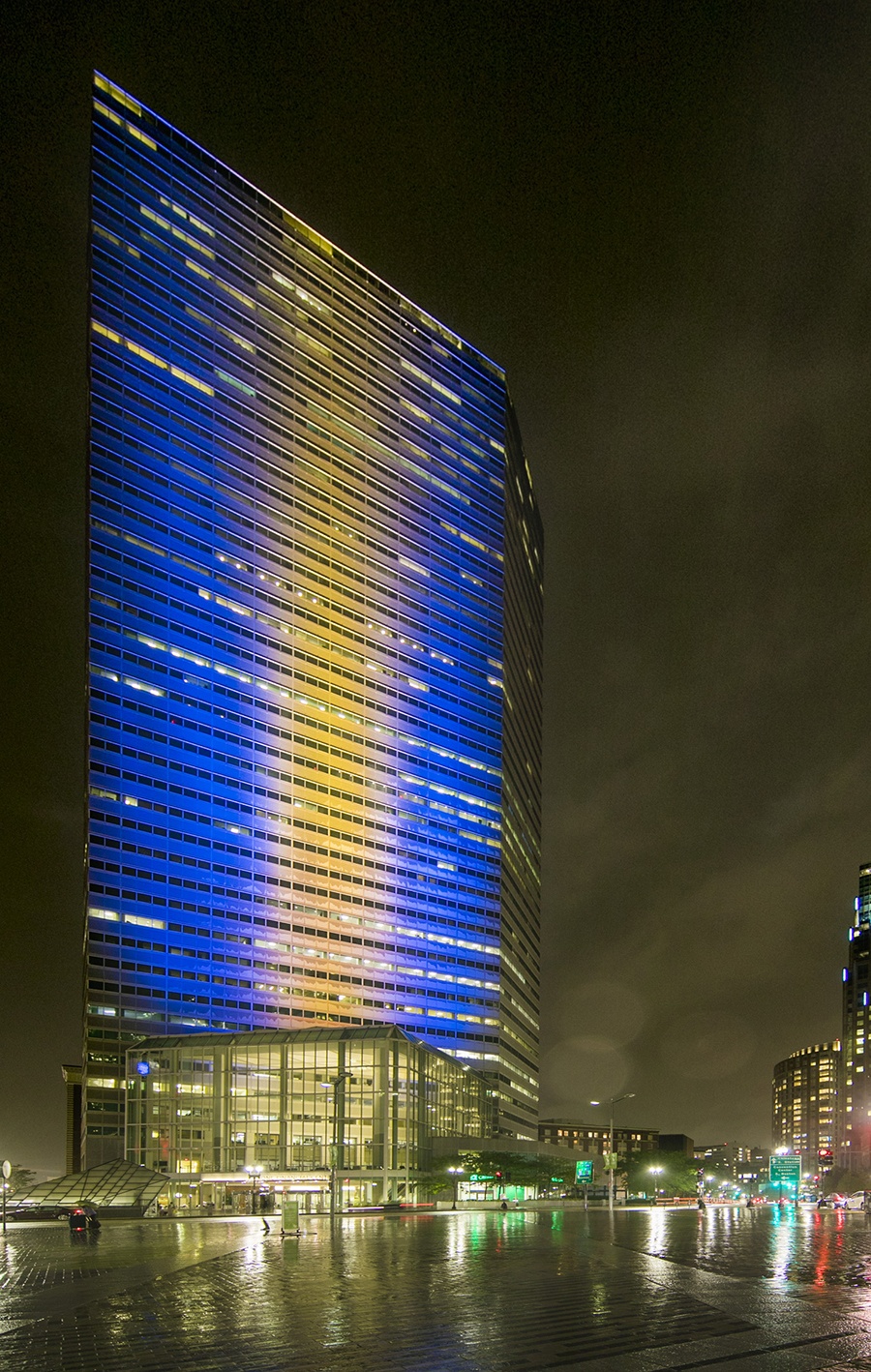