A young family moves into a historical house and brightens the interior with modified architectural details, new custom furniture, and a crisp coat of white paint. 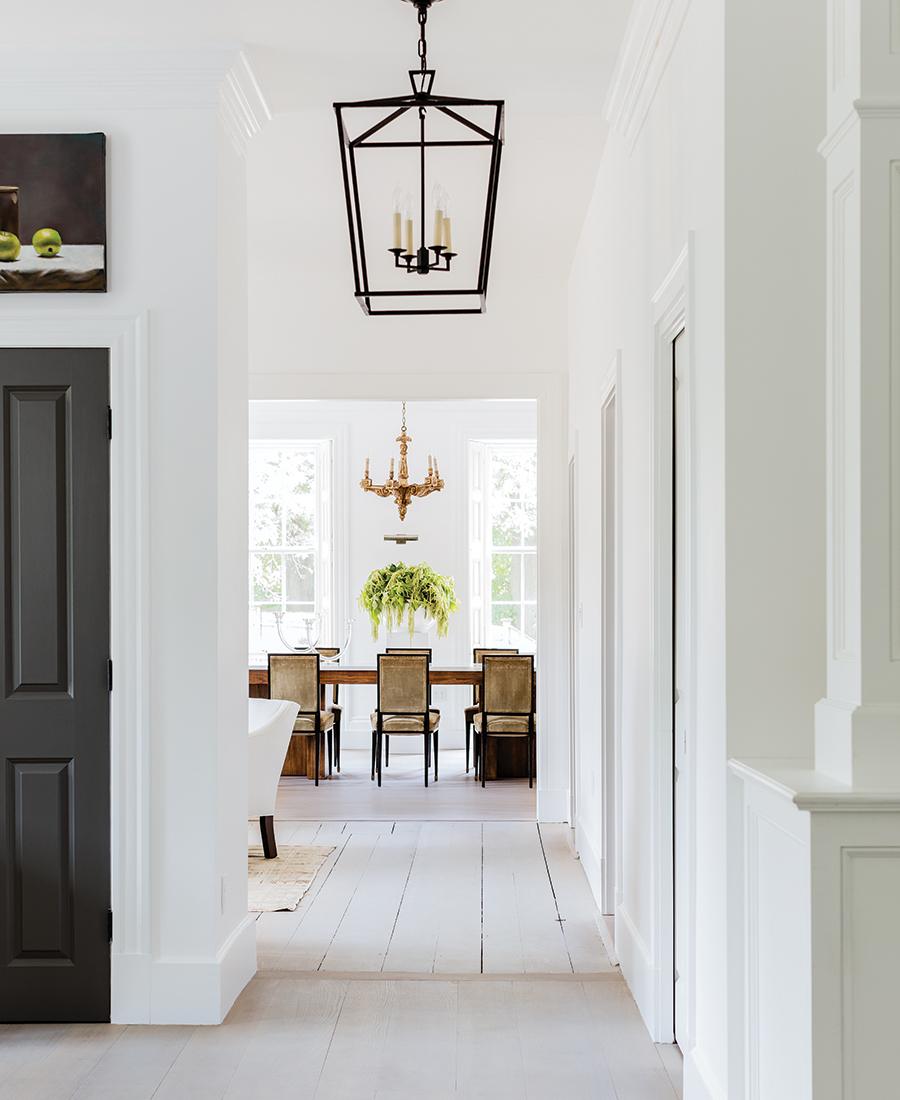 In this view from the kitchen, a small den opens to the revamped dining room at the front of the house. / Photo by Michael J. Lee

Before they actually decided to buy their 19th-century Greek Revival, the soon-to-be-owners first called interior designer Lisa Tharp. Although they liked the house’s location in Massachusetts and the space it provided for their family of four, the couple wondered if Tharp could create a simpler look for its interior, which was traditionally decorated and seemed uninviting. “I didn’t want it to feel like a museum with plastic on the couches and don’t-go-in-there spaces,” the wife says. “We don’t take ourselves that seriously.”

Fortunately, Tharp—principal of her eponymous Boston-based firm—was up for the challenge. “This hip, young family almost didn’t buy the house for fear it was too ‘stately,’” the designer says. “I assured them that their dream of relaxed spaces for daily living and hosting extended family and friends was achievable—even in a house with a storied past.”

After talking with Tharp, the couple bought the 6,300-square-foot home and got to work. Since “the bones, the light, and the architectural proportions were great,” Tharp says, she proposed they cover the walls, the trim, and the ceilings with a fresh coat of white paint, which would make the spaces feel new and clean. “A crisp white palette snaps old interiors to fresh attention while serving as an atmospheric backdrop to a mix of interesting players,” she says. 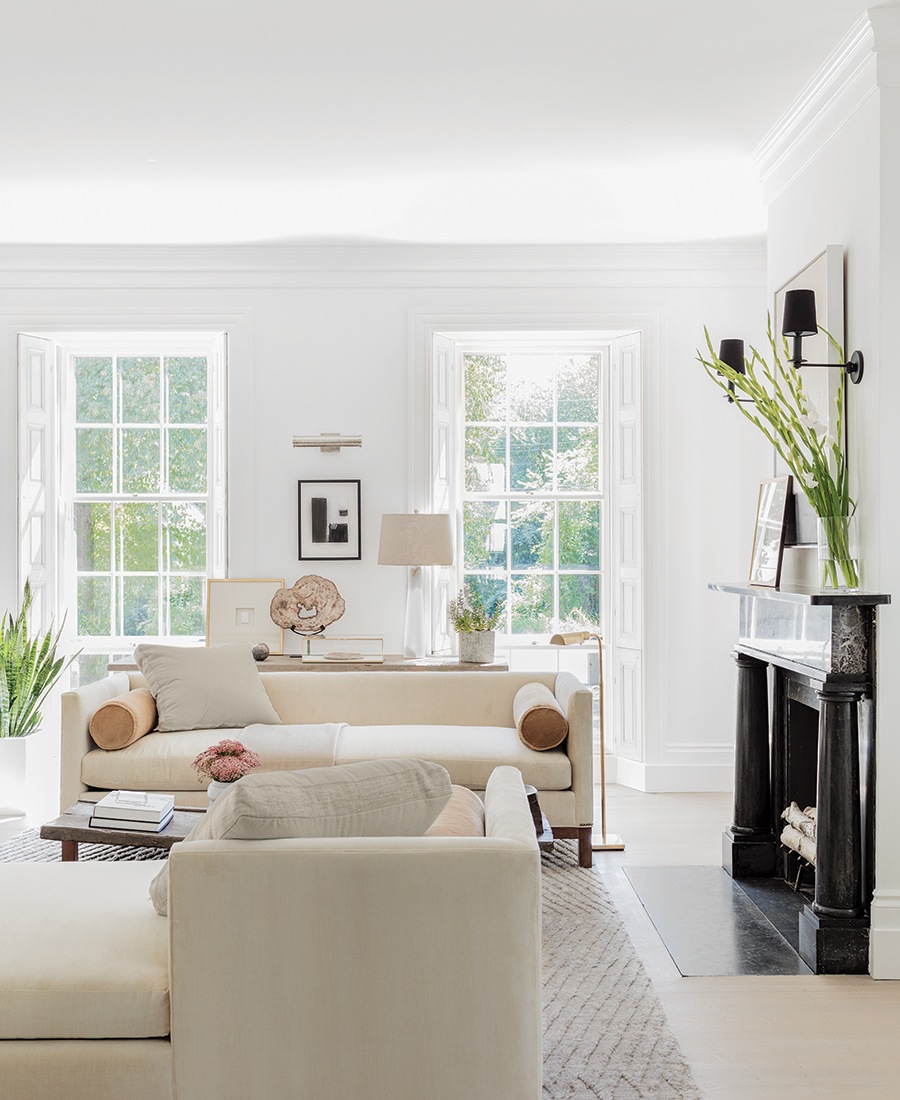 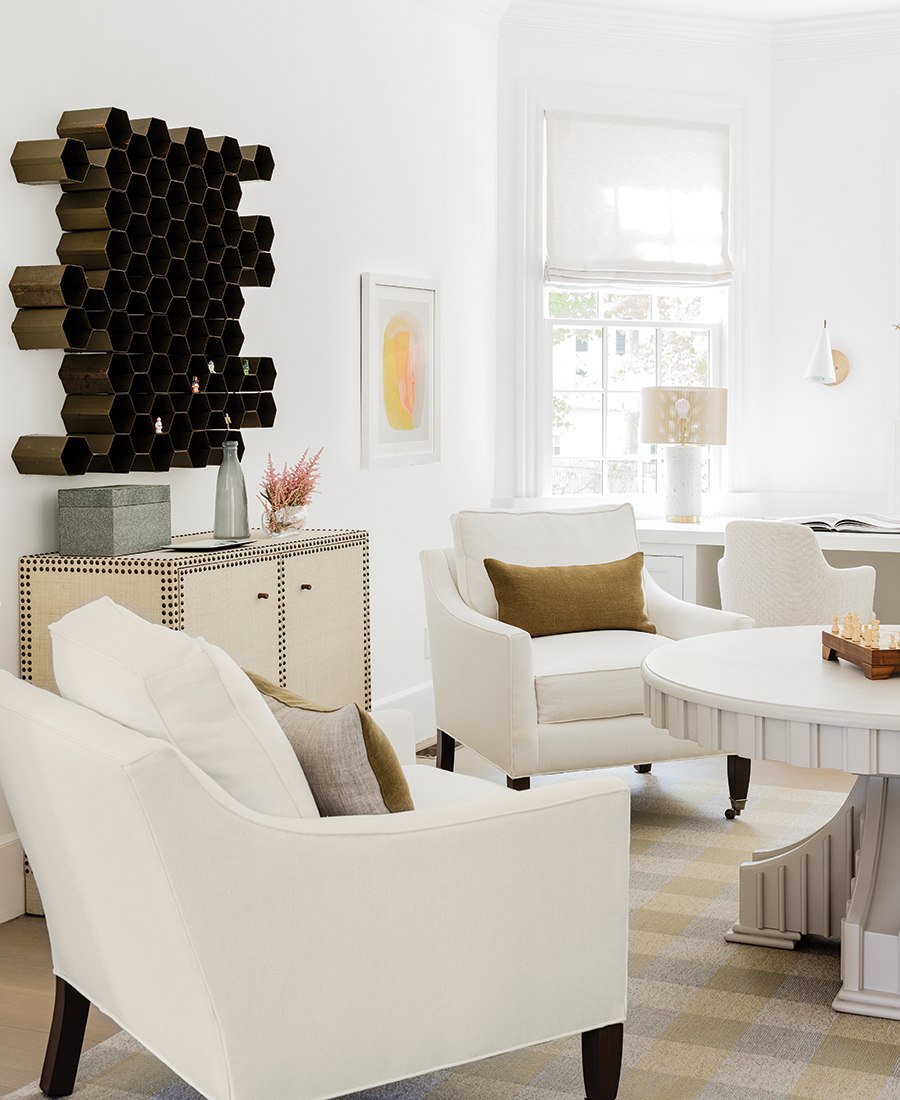 A study off the kitchen includes a kid-friendly game table and custom desk built into the bay window. A wine rack, originally from Doris Duke’s estate, does double duty as wall art and a display for Legos. / Photo by Michael J. Lee 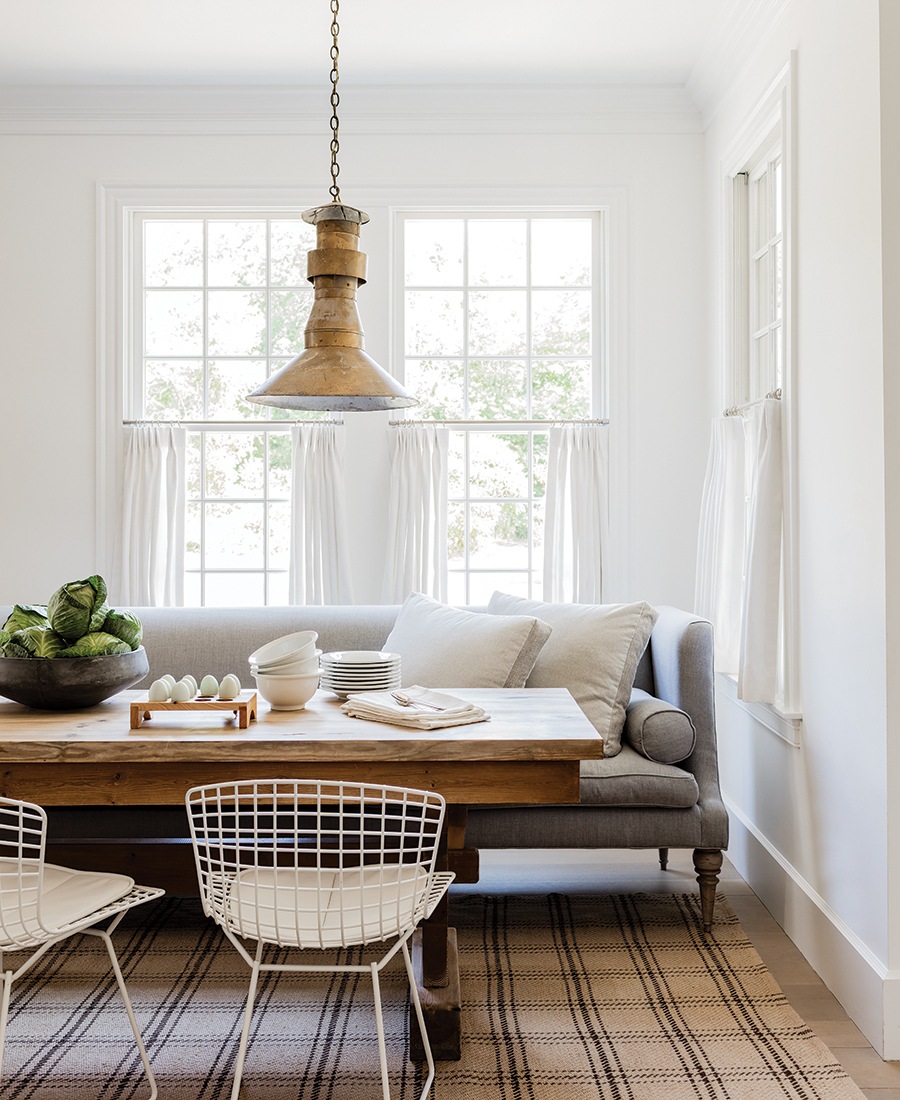 With the color scheme decided, Tharp and her clients talked about minimizing the use of chemicals during the renovation. “We were getting new furniture, and our kids were going to be lying on the couch and playing on the floors,” the wife says. “I try to avoid chemicals and wanted a home that was healthy to be in.” To that end, Tharp planned to use materials such as natural-fiber fabrics and non-toxic paints and floor stains, as well as formaldehyde-free wood in the overall design, which called for custom furnishings to suit the owners’ lifestyle.

Modifying the home’s architectural details would be crucial to the overhaul, too. In the original section, which dates to 1830 and has been added onto over the years, a foyer opens to a living room with new custom built-in bookcases made by Hingham-based Burnham Builders. “The room became much cozier when we added the bookcases,” Tharp says. A pocket door between the built-ins connects to the dining room, which—like the living room—features a black marble fireplace and hardwood flooring that Burnham Builders sanded and washed with a pale gray stain. Next, the team reunited the windows in the living and dining rooms with their original interior shutters, found in one of the property’s outbuildings. “[The shutters] are embrasured, meaning they fold into pockets inside the window jamb,” Tharp explains. “They are classical European and early American, and take advantage of thick walls.” 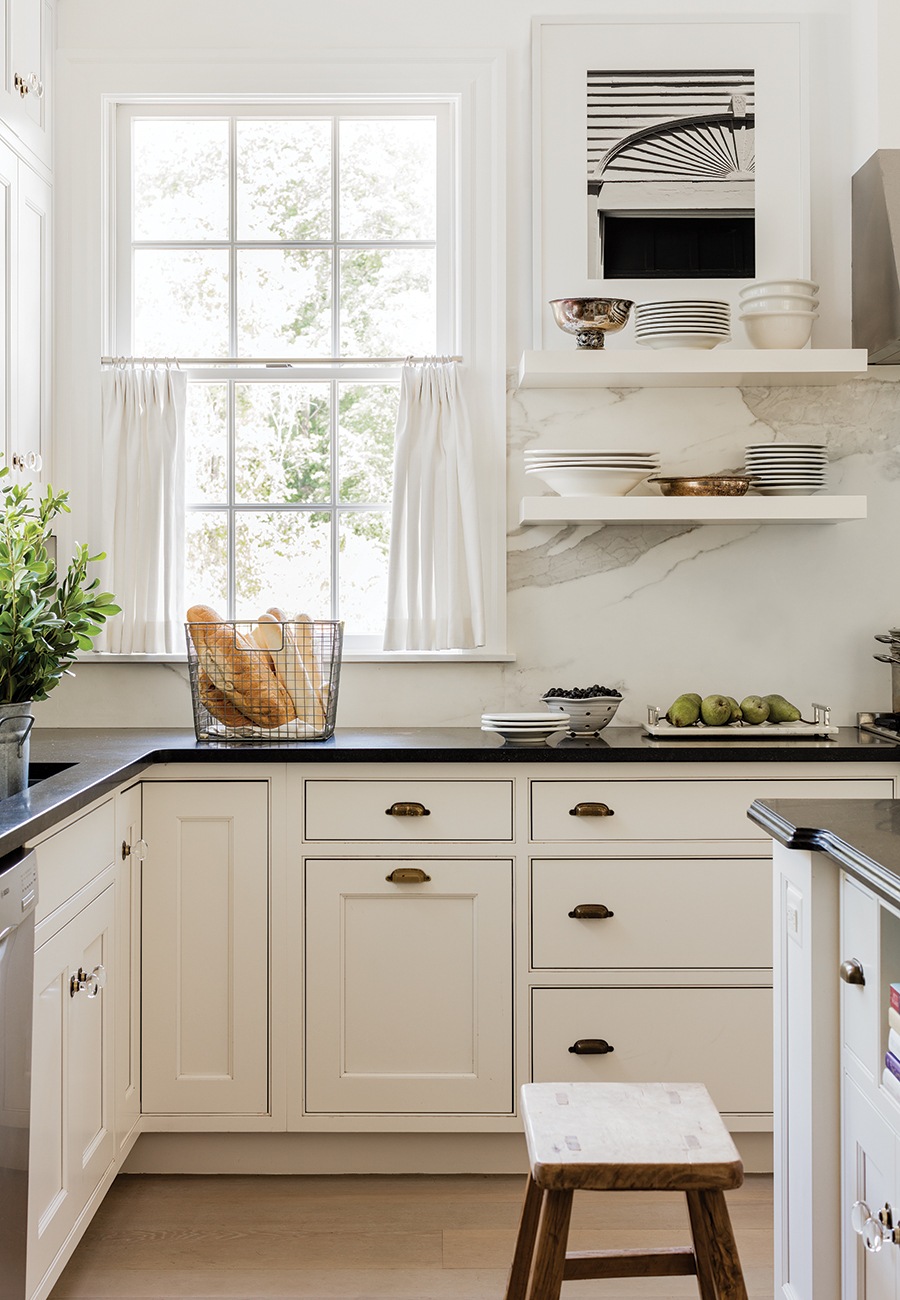 Black soapstone countertops pop against the white cabinetry and Neolith backsplash in the kitchen. / Photo by Michael J. Lee 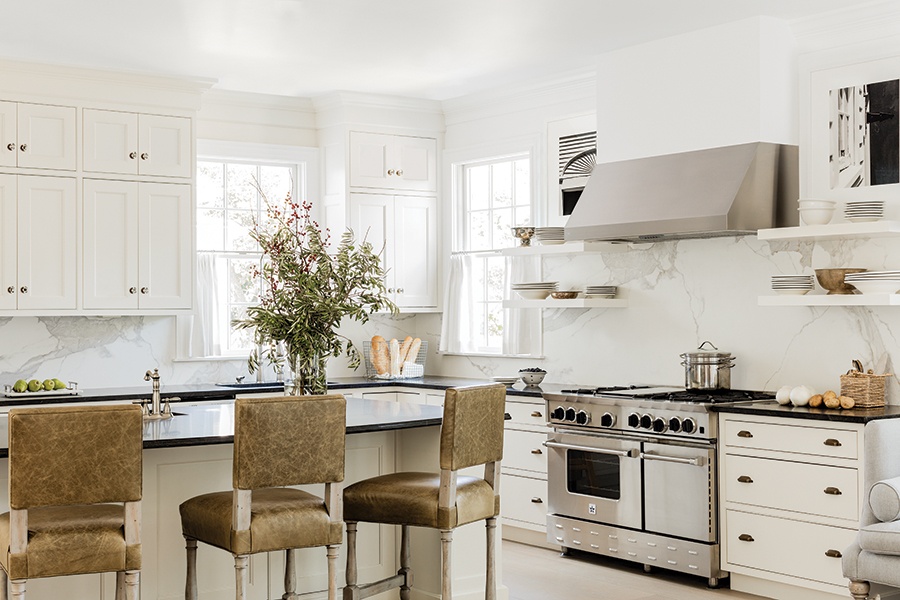 The renovation continued in the study and the kitchen, which coexist in the center of the house. Here, creating gathering places for the children was paramount. To ensure that the kids do their homework in the study rather than hide out in their own rooms, Tharp had Burnham Builders fashion a custom desk in the bay window. In the kitchen, they now congregate at the dining table or the island, which—like the new perimeter counters—features black soapstone that pops against the white cabinetry and Neolith backsplash.

Tharp also focused on creating gathering places on the second floor, where she revamped the bedrooms. Featuring custom built-ins and shiplap-plank accents by Burnham Builders, a bunkroom behind the lofty master suite is everyone’s favorite. Here, a new dormer allows space for four twin beds and one full bed. “Christmas is big in our family,” the wife says about the need for those extra sleeping spots. Tharp finished the room with whimsical yellow floors, painted by local artisan Pauline Curtiss, and a chalkboard wall installed around the TV. “There’s a lot of functionality packed into this small room,” she says.

The result is a house that’s minimal but not stark, clean yet casual—all backed by that white palette. “I’m still glad I made that choice,” the wife says. “I thought of it like a little black dress: It’s a clean and neutral envelope that you can add personality to with the furniture and accessories.” 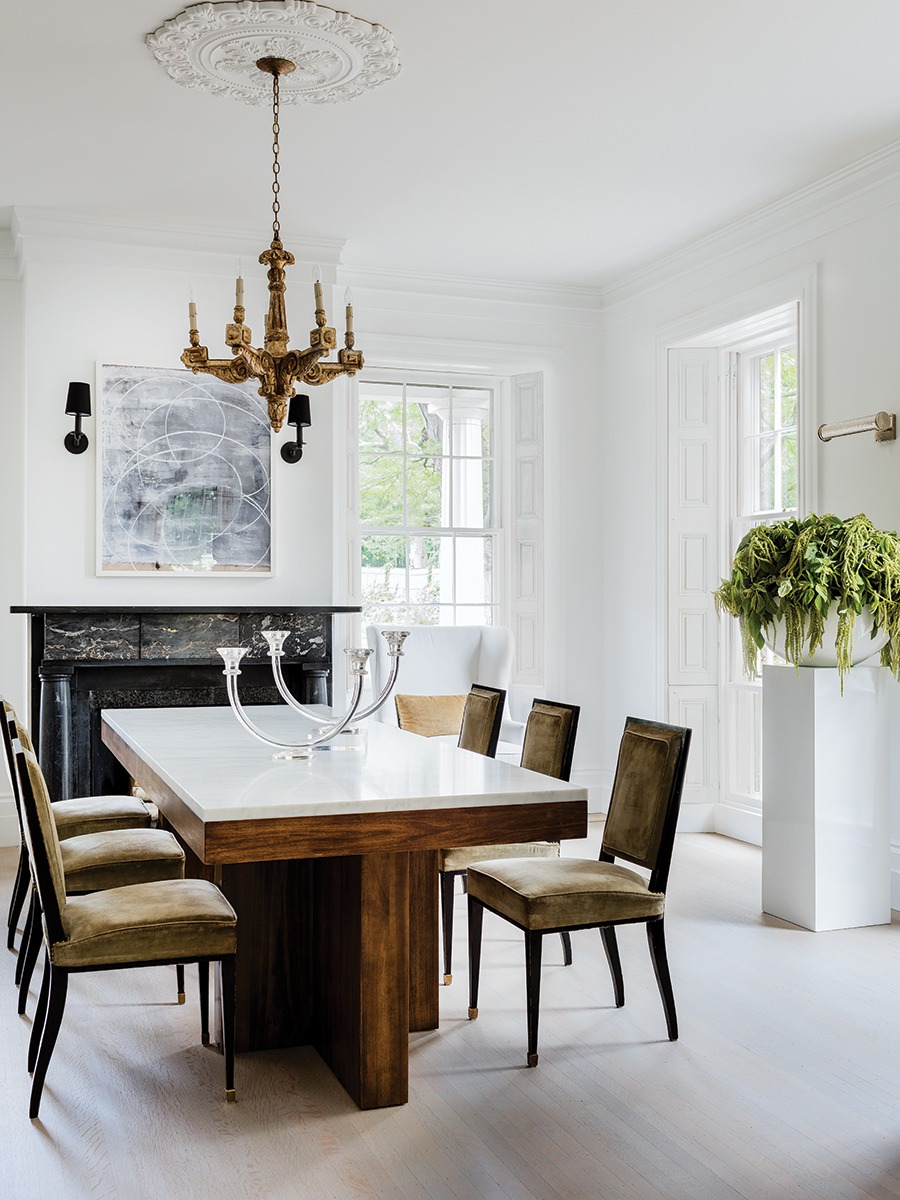 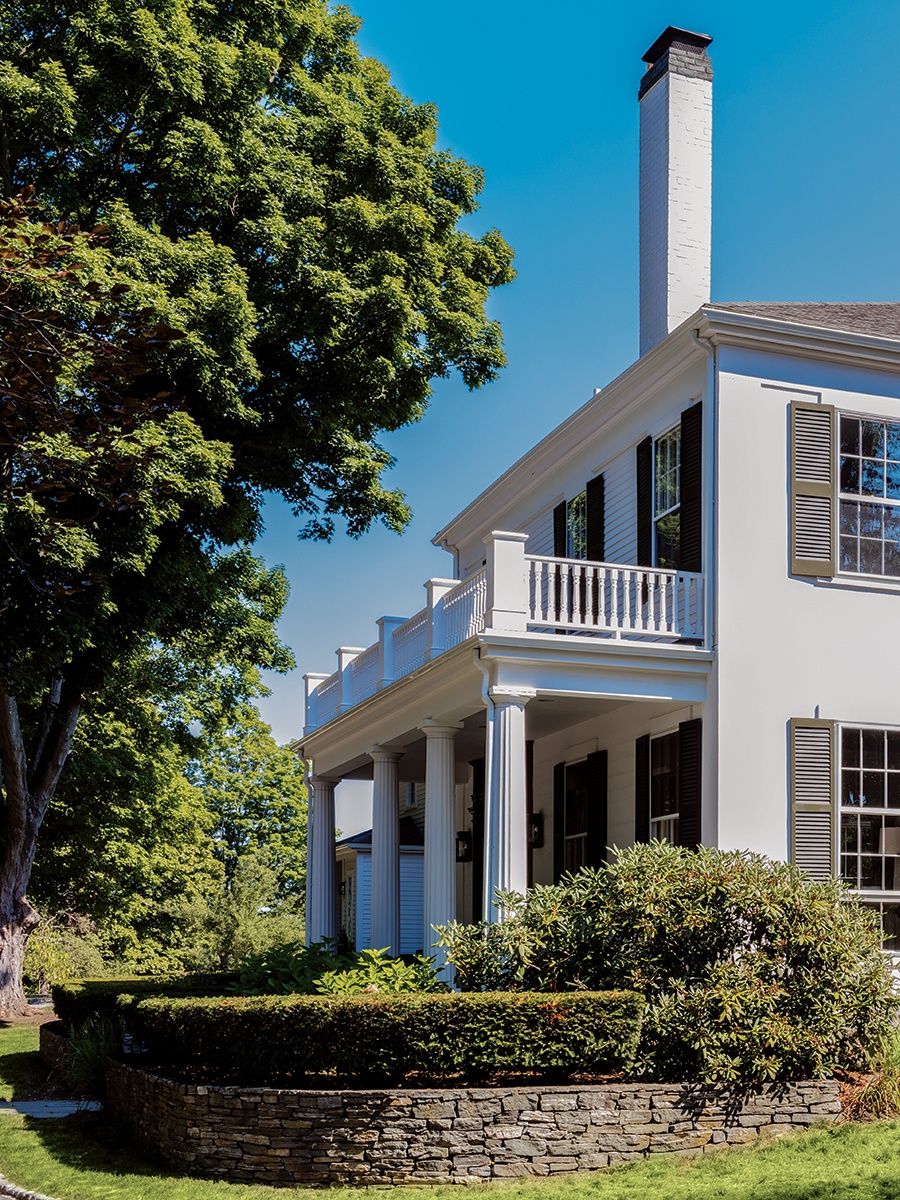 With classic columns adorning its exterior, this part of the house—which has been added onto over the years—dates to 1830. / Photo by Michael J. Lee 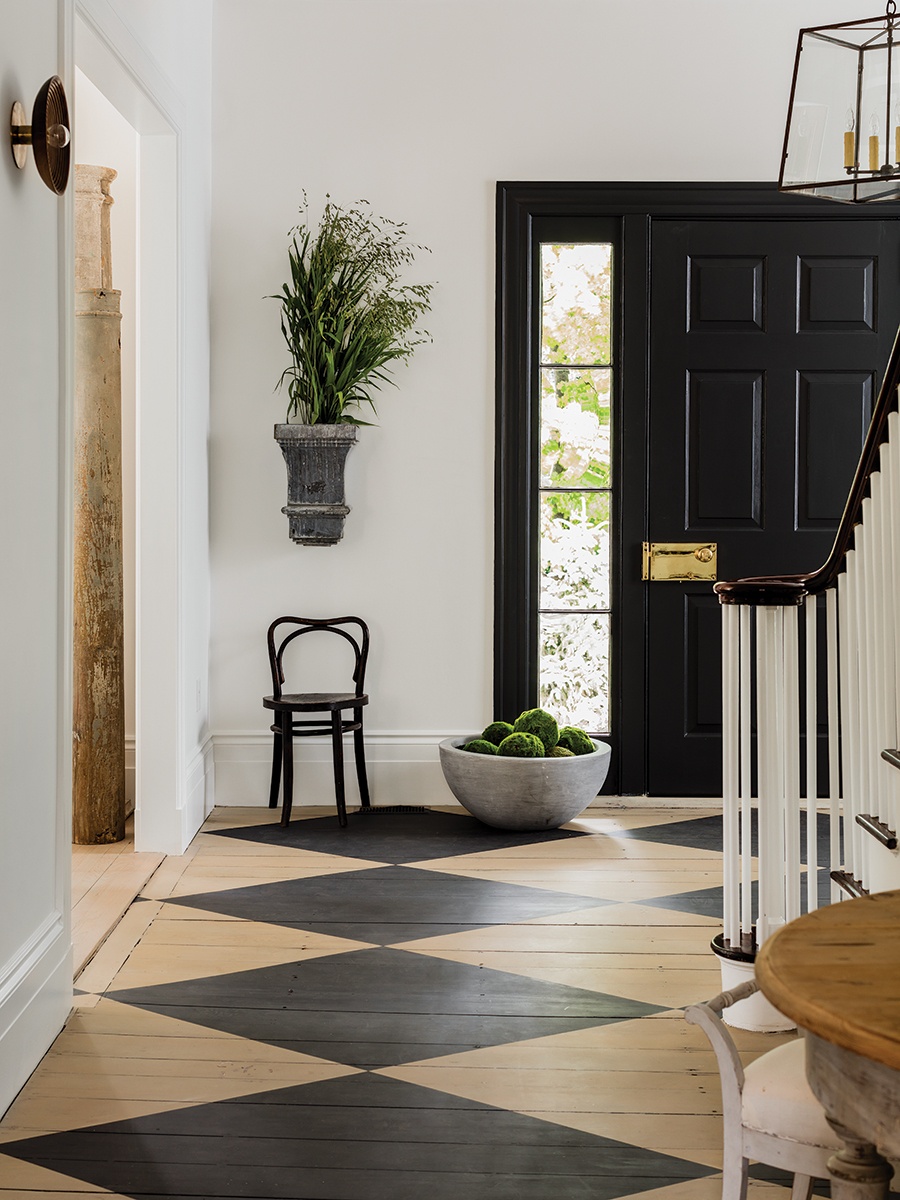 Tharp revitalized the front foyer by having Natick-based Arteriors paint a graphic diamond pattern on the floor. / Photo by Michael J. Lee 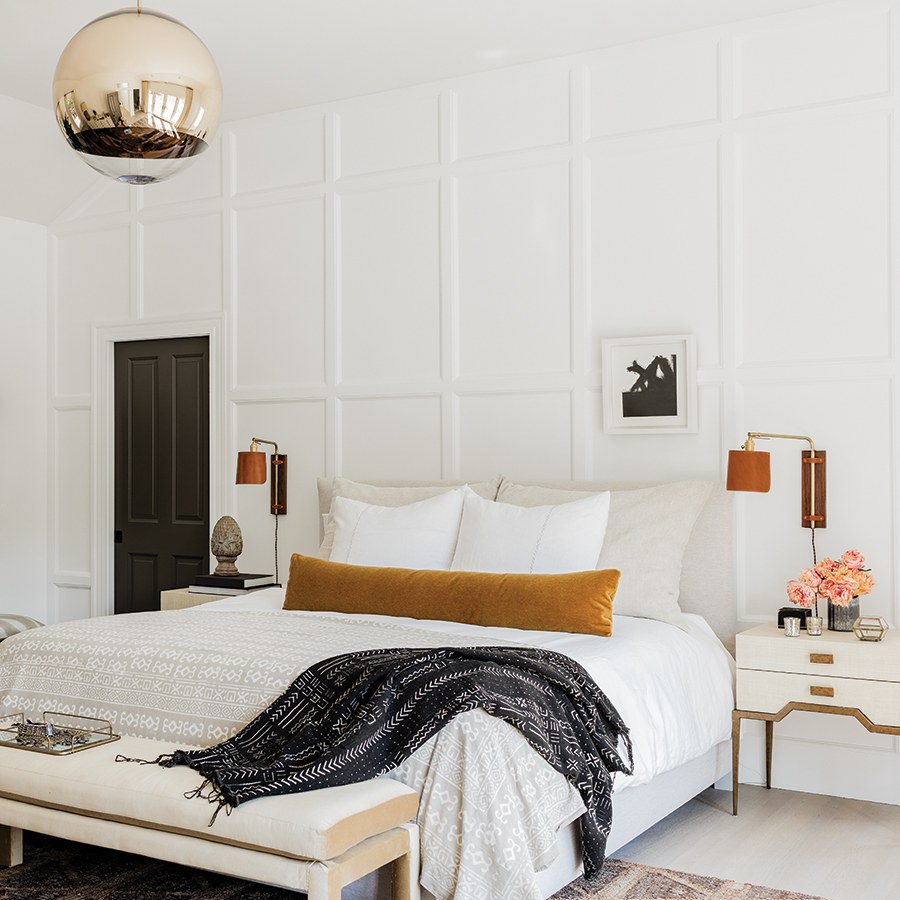 The master bedroom features 10-foot ceilings and a paneled accent wall that Tharp and Burnham Builders worked on together, mapping out the panels with tape until they got the dimensions just right. / Photo by Michael J. Lee 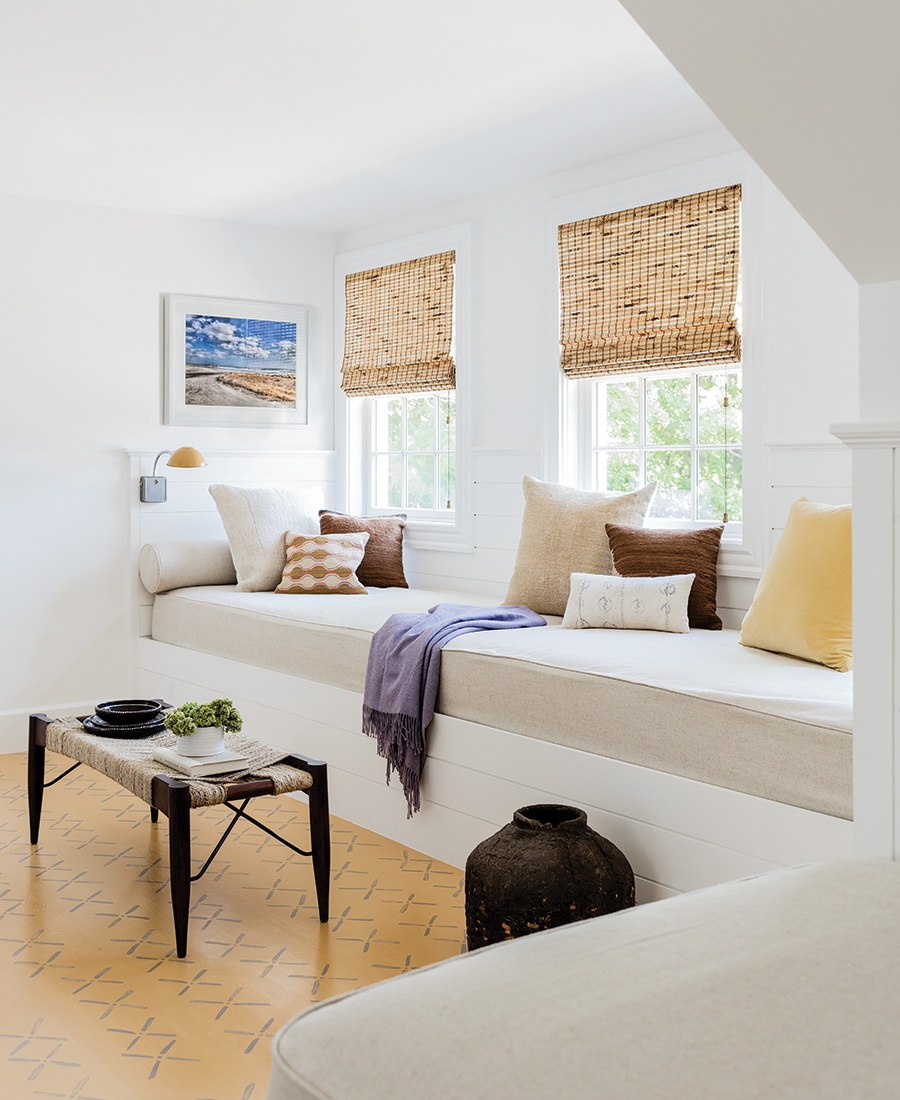 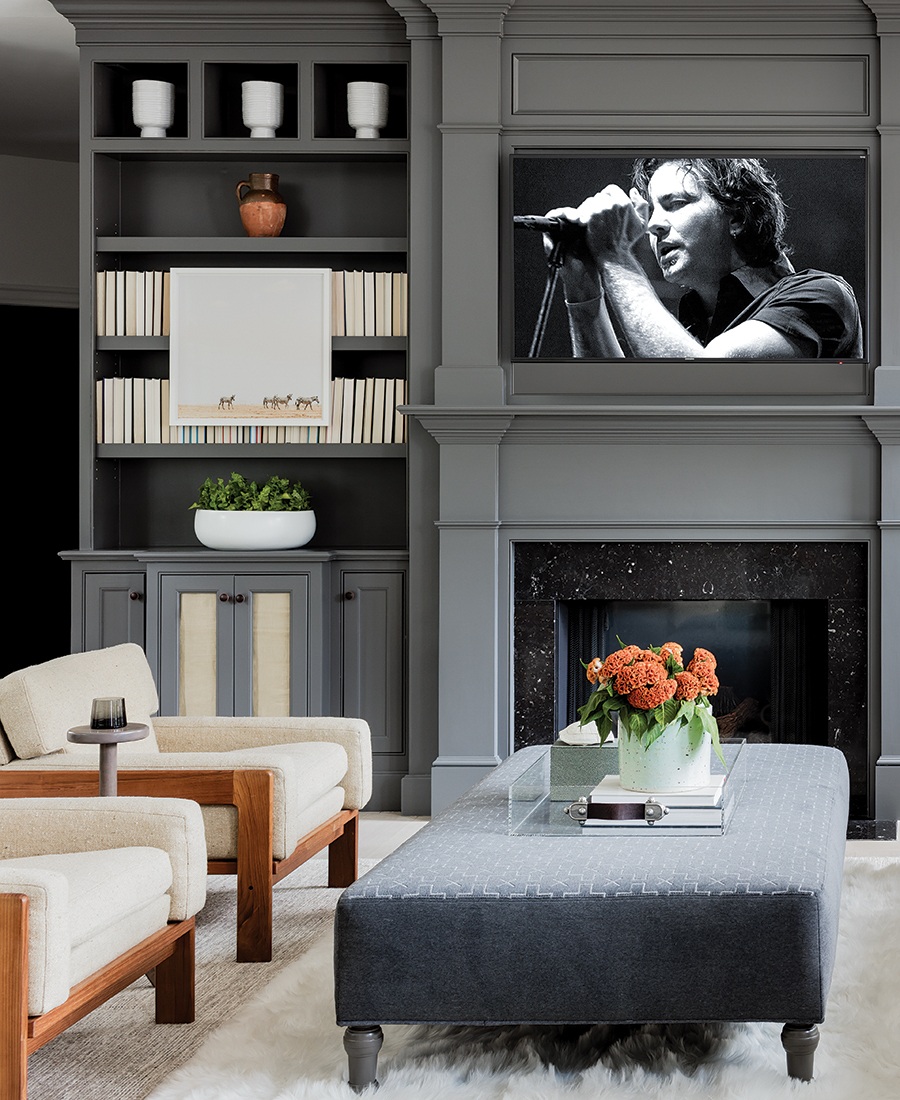 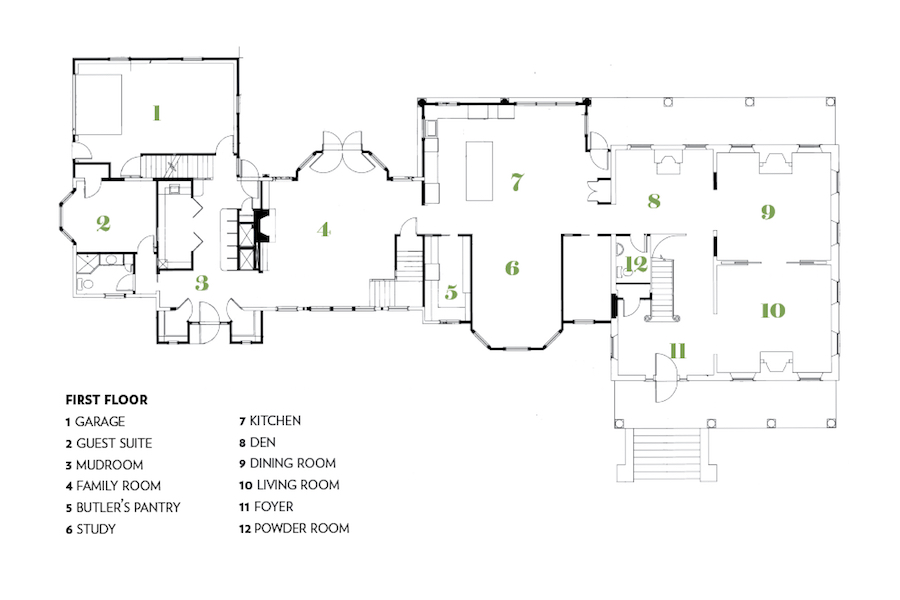