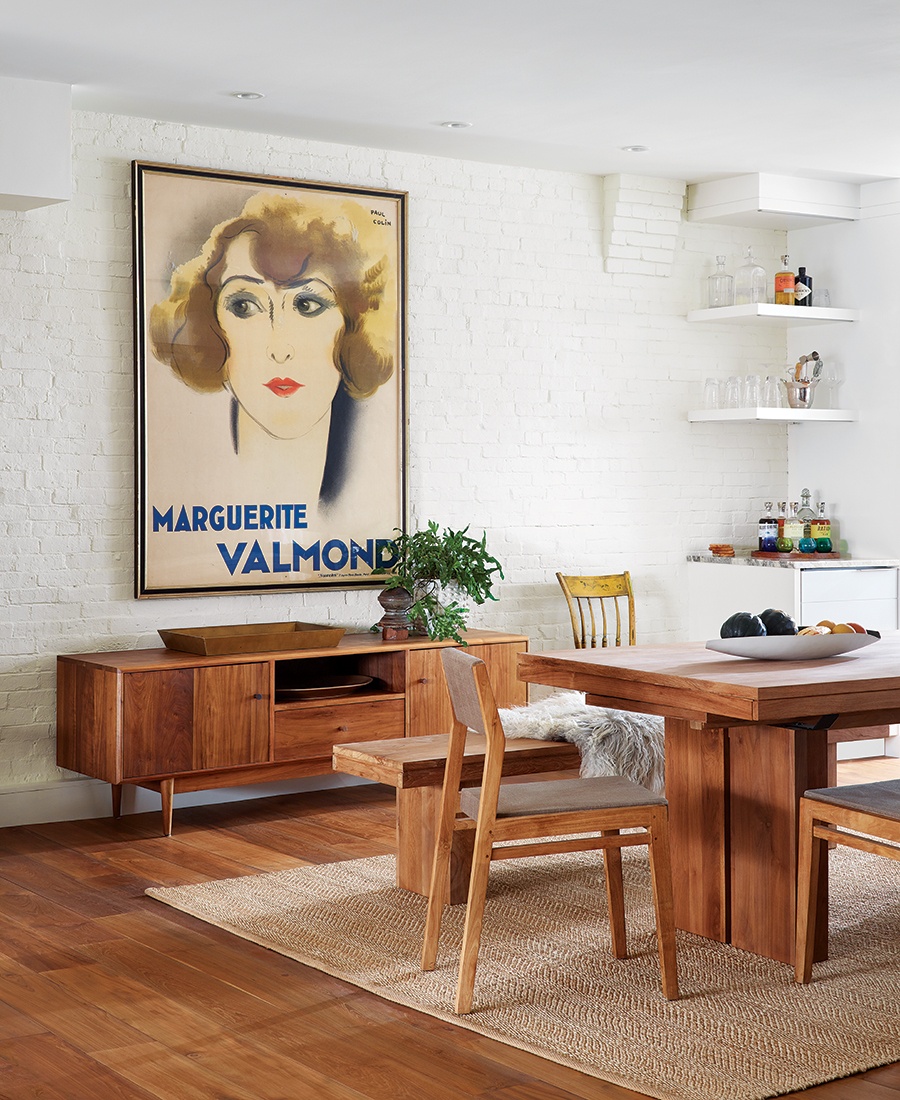 When Bubba Hagood first saw the historical North End condo perched over Boston Harbor, he knew it would require a complete overhaul. “The current owner had bought the property in 1971, and hadn’t done anything to it in all that time,” says the Louisiana native. While the prospect of an extensive rebuild might spook the average homebuyer, Hagood has an affinity for complex problems. A software CEO and bona fide rocket scientist (“I was a professor in the aeronautics and astronautics department at MIT,” he notes), he welcomed the opportunity to re-engineer the 1,713-square-foot unit. “I wanted something that I could put my impression on,” he says.

Hagood bought the unit in 2013 and moved in to get a feel for the space. “It was almost like camping,” he says. Around the same time, he met Lori Baronian, an HR executive living in the Seaport. Just as the pair started dating, Hagood prepared to upend his apartment, recruiting Clear Creek Architects, of Colorado, to develop an open floor plan that would update the home’s functionality and optimize every inch of space.

After spending three years refining the layout, Hagood enlisted David Cohen, principal of Hampden Design + Construction in Newton, to translate his exacting vision. While Hagood and Cohen reviewed measurements, Baronian recommended hiring interior designers Ryan Stanton and Jessica Schwartz, of the Boston-based firm Stanton Schwartz Design, to provide some creative guidance. When the team arrived onsite in 2016, Hagood decamped to Baronian’s 800-square-foot home, where the two lived together for 14 months. “It kind of cemented things for us,” Baronian says. 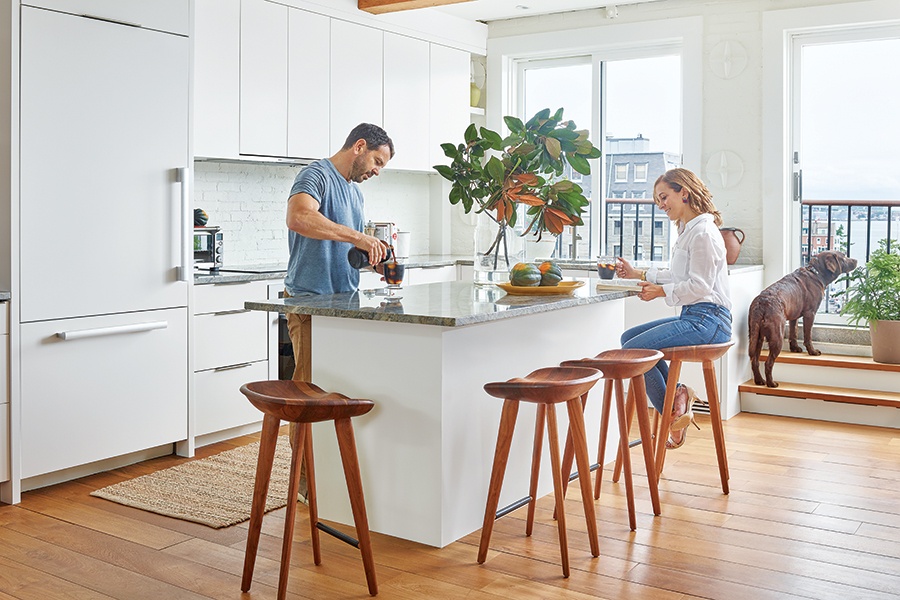 The couple relaxes in the kitchen, which features custom cabinetry by Jewett Farms + Co. The resident canine, Homer, sniffs out the balcony. / Photo by Jared Kuzia 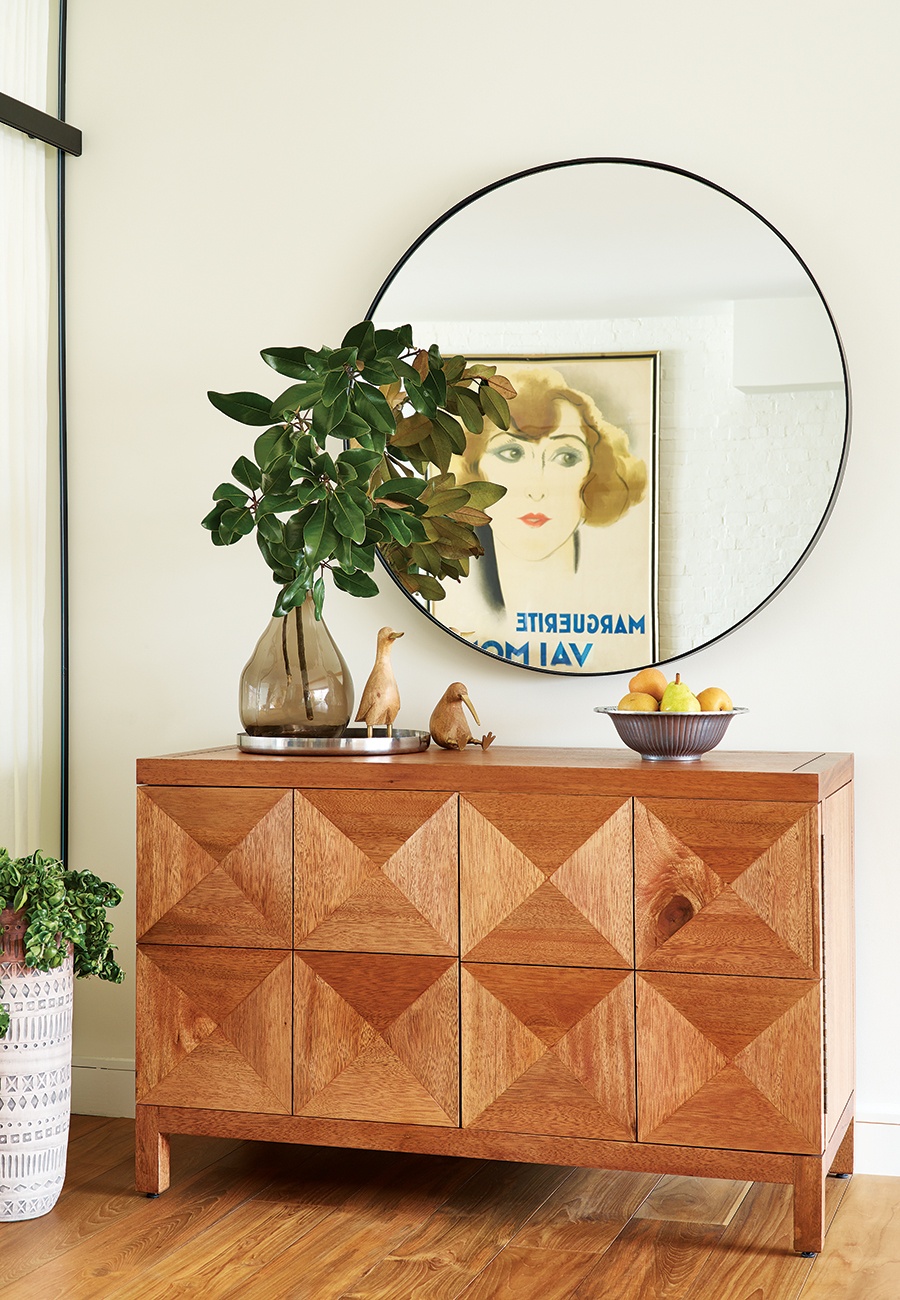 In the living area, a round custom mirror and a walnut credenza merge geometric shapes and patterns. / Photo by Jared Kuzia 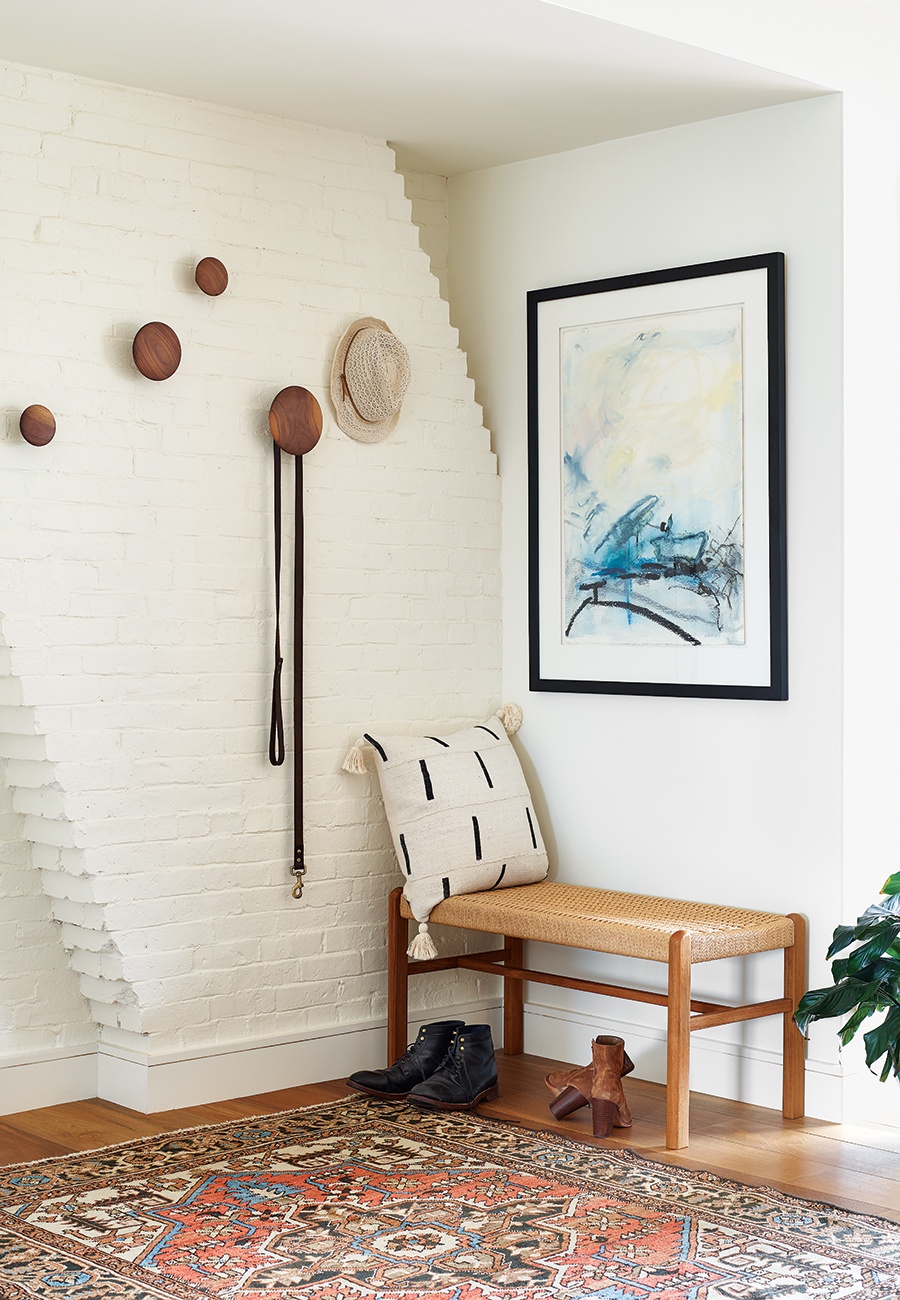 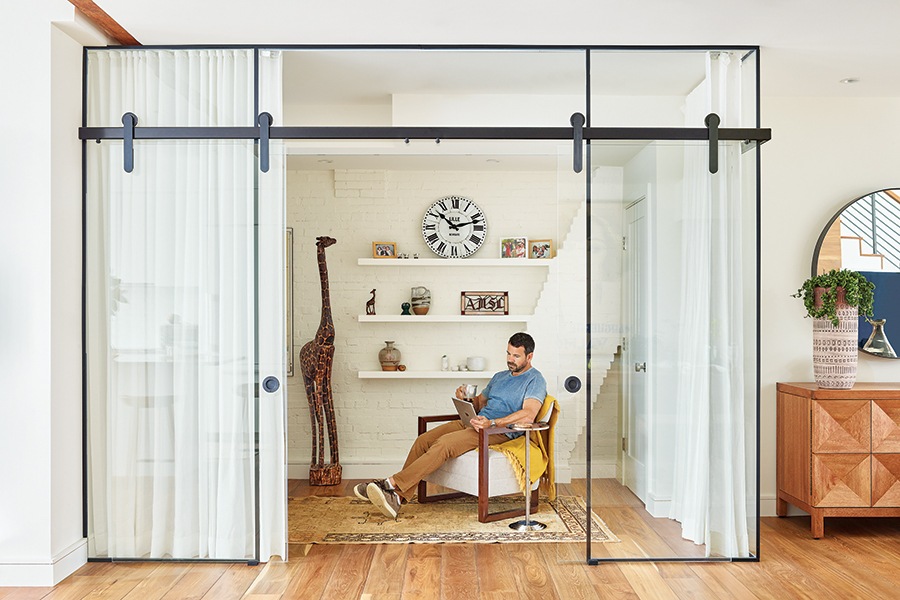 As the couple’s relationship evolved, so did the apartment. Stanton and Schwartz had one main objective: to incorporate the building’s location into every aspect of the design. Flanked by the harbor and a private marina (where Hagood docks his boat), the property boasts water views on both sides. Hagood asked the designers to emphasize the views without obstructing any part of them. “[Bubba] wanted to see the water from anywhere he was sitting,” Schwartz says.

That directive led to one of the home’s more ingenious—and essential—features: a first-floor guest room, enclosed in glass walls to provide unrestricted views of the marina outside. “We made the doors large enough so that the room almost disappears when they’re open,” Schwartz says. But the team also installed drapery on a recessed track to deliver complete privacy when the space hosts one of Hagood’s three daughters (all in their twenties).

In a way, the glass room provides a window into the home’s overall aesthetic. It has a streamlined, soulful quality. “[Bubba] wanted the space to feel lived-in and zen, almost like an Old-World temple fashioned out of new materials,” Schwartz says. To achieve that balance, the team embraced natural elements and accentuated the home’s original details. The silvery-gray hue of the quartzite countertops in the custom kitchen and the first-floor bathroom echoes the water outside; a preponderance of maple cabinets and teak floors and furniture adds earthiness and warmth. Stanton and Schwartz also preserved key features, such as exposed brick and wood beams, to honor the home’s 19th-century roots. 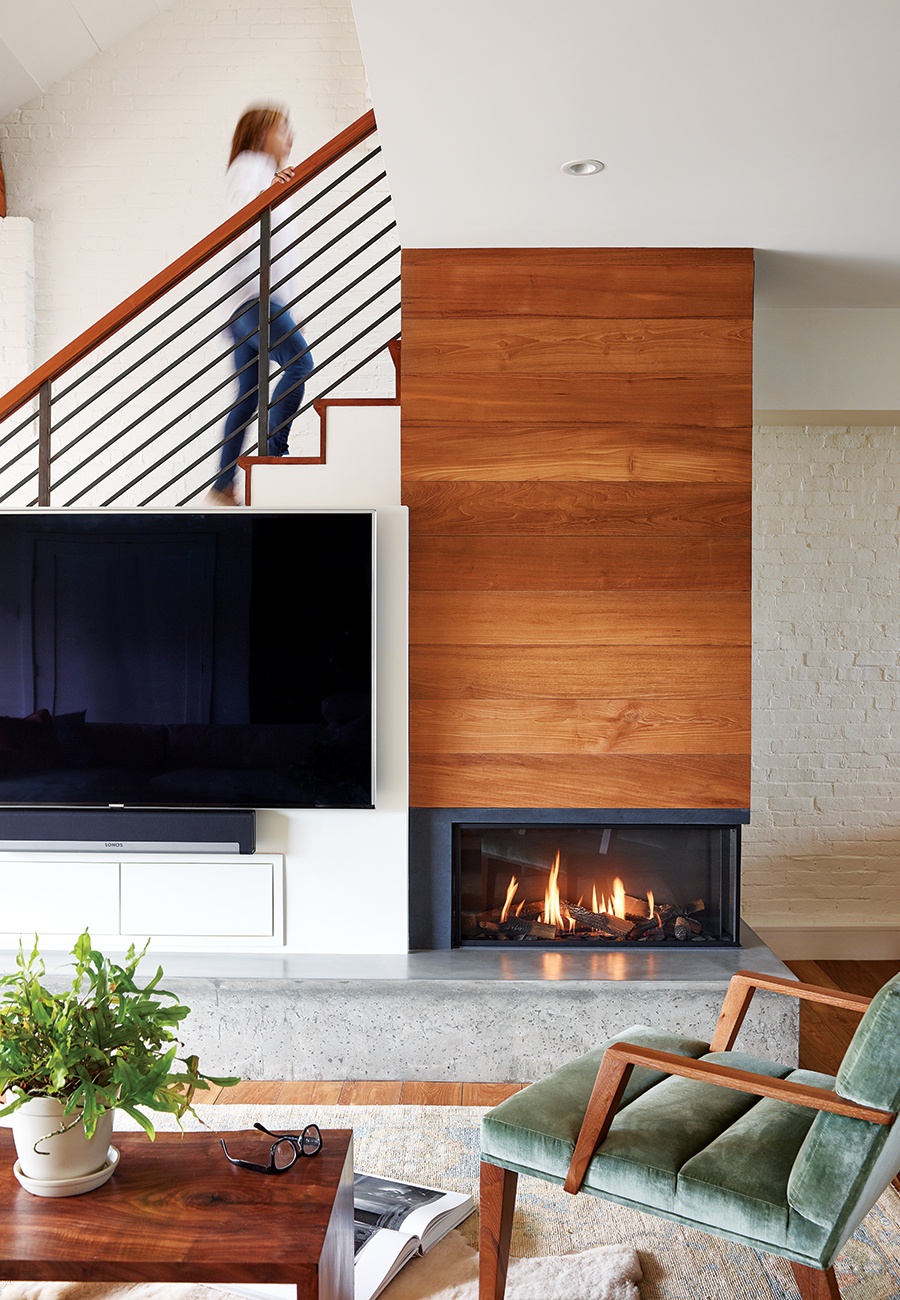 The level of detail that went into venting the linear fireplace in the living area “probably took a year to think through,” Stanton says. / Photo by Jared Kuzia 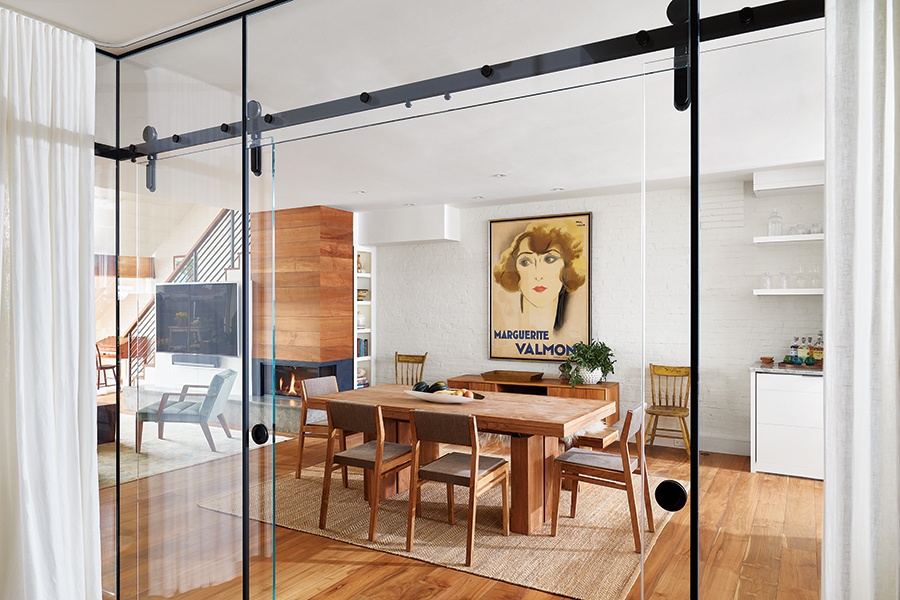 Solid teak flooring and furniture add warmth and symmetry throughout the home. / Photo by Jared Kuzia 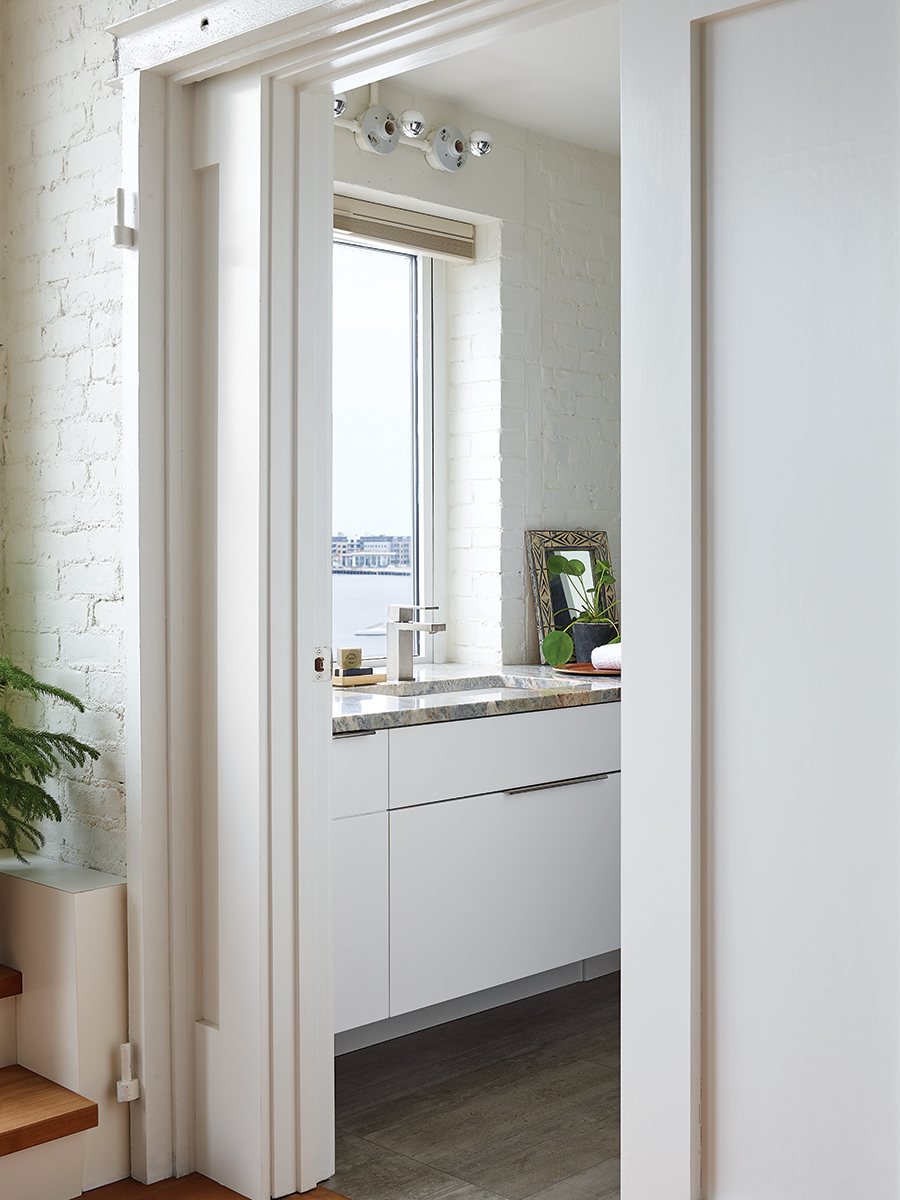 The team used the space formerly occupied by an elevator shaft to build a new first-floor bathroom. / Photo by Jared Kuzia 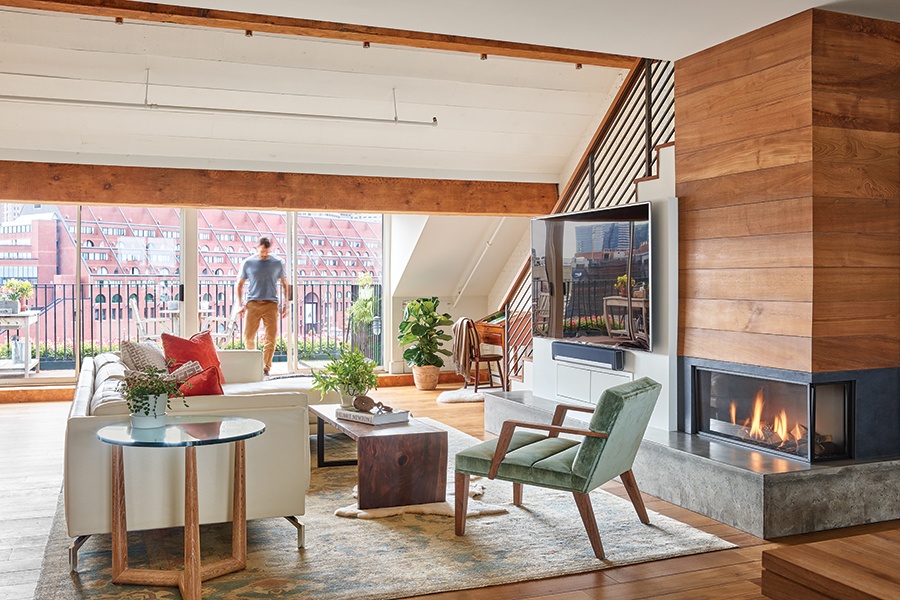 Hagood checks on his boat docked in the marina below. / Photo by Jared Kuzia

Designers also implemented significant changes on the second floor, accessed by a distinctive staircase fashioned out of steel and teak. The original staircase was L-shaped and faced the front door. “It carved up the unit, so it had to go,” Schwartz says. The new stairway leads to an enormous master suite that Stanton and Schwartz extended by three feet. Here, an expanse of windows affords sweeping water views and an abundance of natural light, tempered by custom motorized shades.

Inside the master bathroom, limestone walls display the faint markings of small shells and fossils embedded within. “There’s an honesty to all of the materials in this home,” Schwartz says. “The concrete looks like concrete, the teak looks like teak, the stone looks like stone. Nothing is manufactured.” That said, the shower has a clever design that feels more innovative than organic: “You can turn on the water without getting wet,” says Stanton of the recessed showerhead, which Hagood helped draft and position. “It’s the engineer’s mind at work.”

A key counterpoint to that engineering mind is Baronian’s more spontaneous approach. “My brain isn’t quite so concerned with symmetry,” she says. Before the couple moved into the nearly finished space in 2017, Baronian made an unexpected request—and received an equally unexpected response. “I came across this big poster sitting against a dumpster in the rain,” she says. “I was sure Bubba was going to say it doesn’t fit with the rest of the décor, but we took it.”

The discarded poster turned out to be a valuable first-edition print by French artist Paul Colin. Baronian and Hagood placed the artwork on prominent display in their new home—and got engaged a few months after. 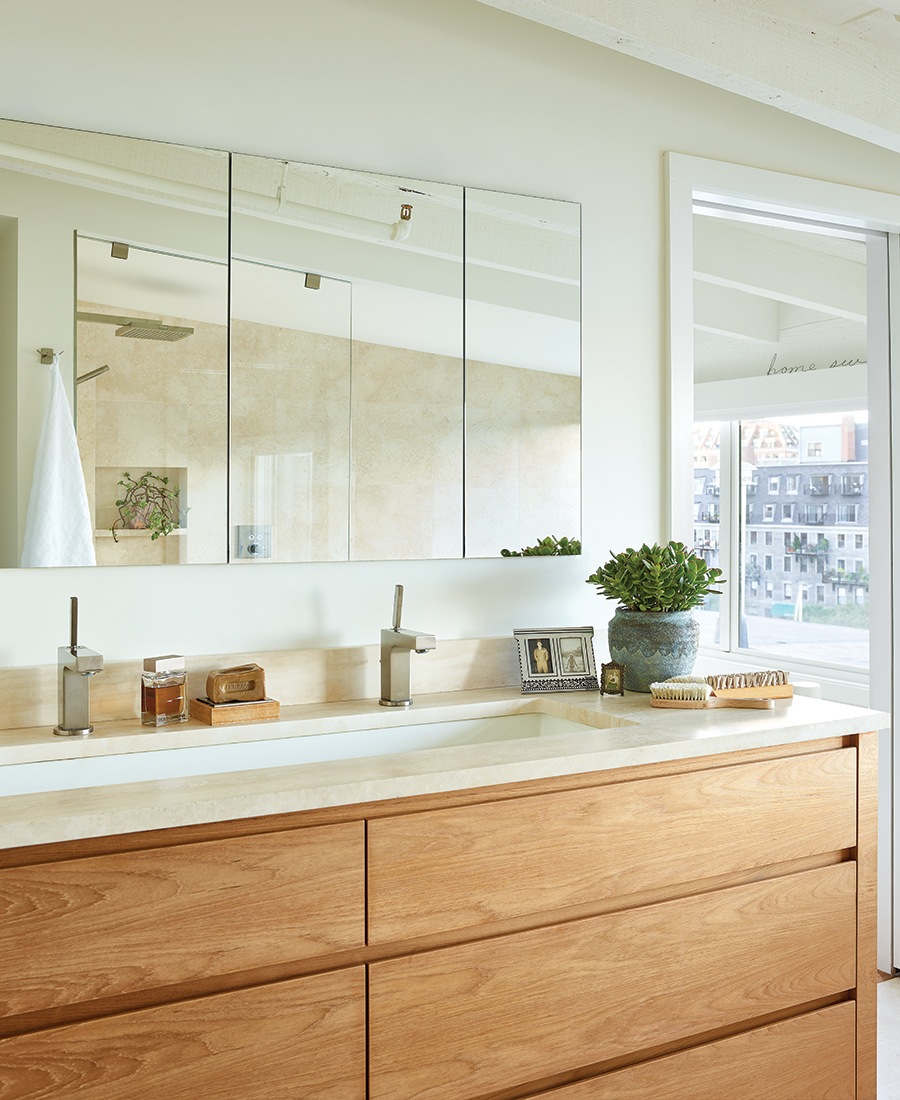 In the master bath, drawers open with integrated pulls instead of hardware to preserve a streamlined effect. / Photo by Jared Kuzia 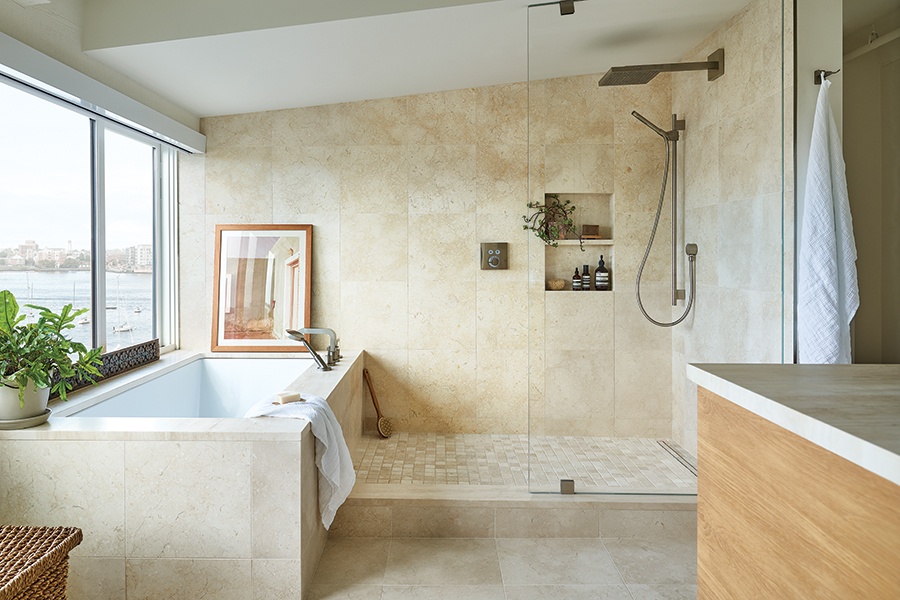 The master bathtub had to be “nudged this way and that way” during installation to optimize the harbor views, Schwartz says. / Photo by Jared Kuzia 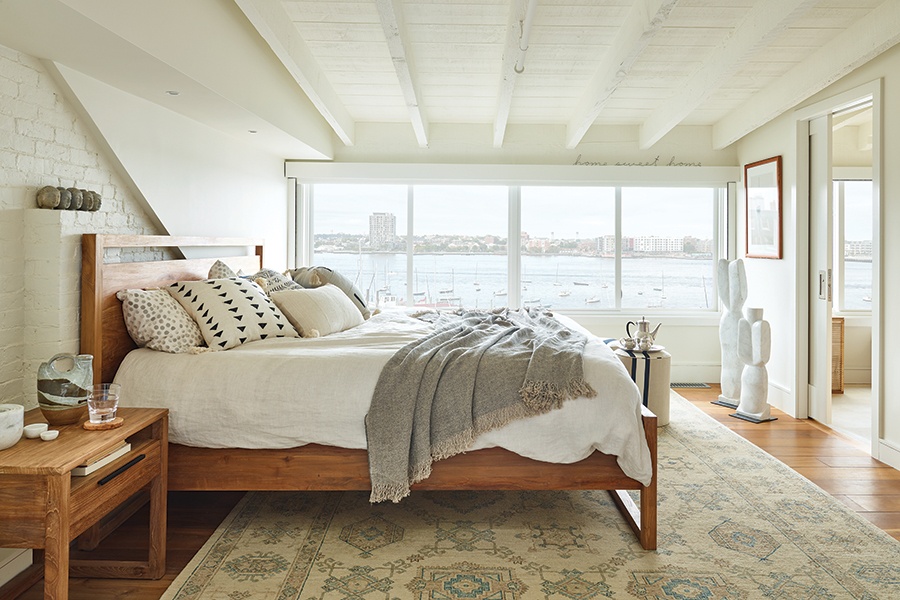 A serene palette of cream, ivory, and light blue echoes the view and lends a relaxed air to the master bedroom. / Photo by Jared Kuzia 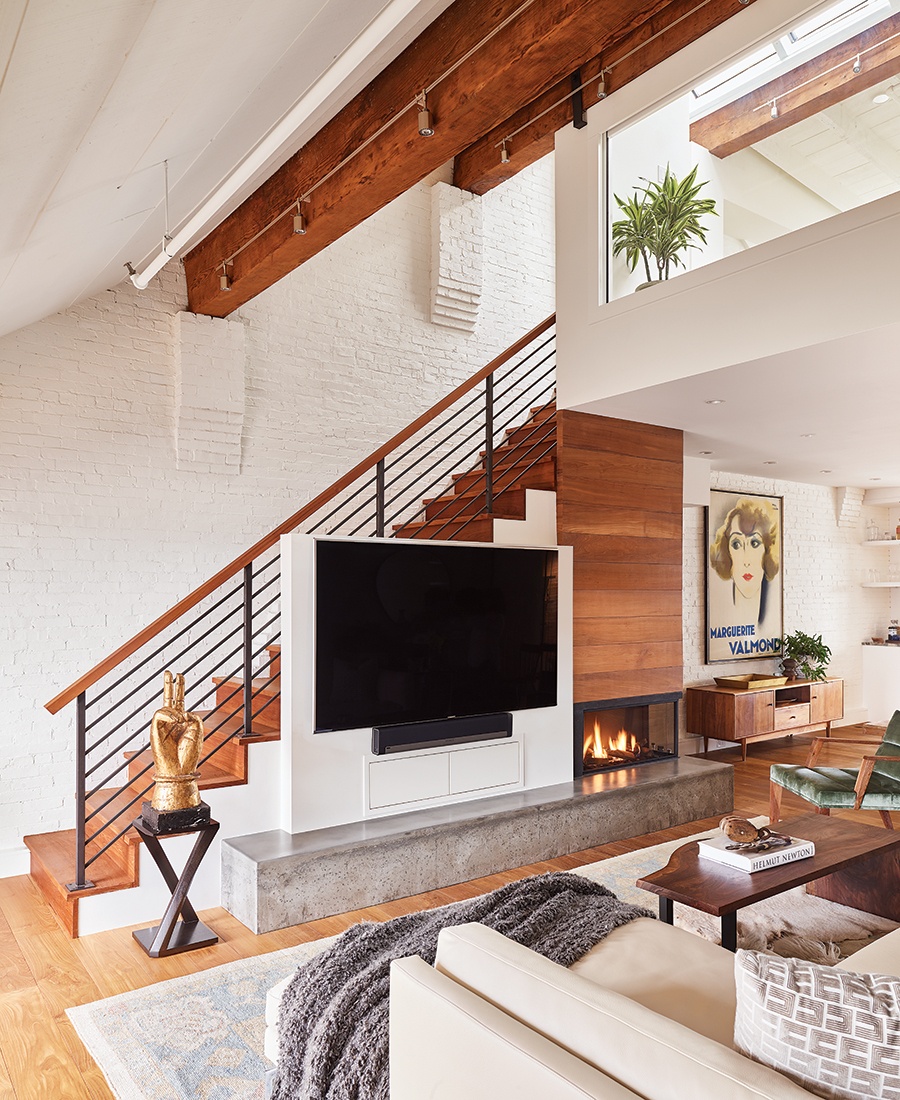 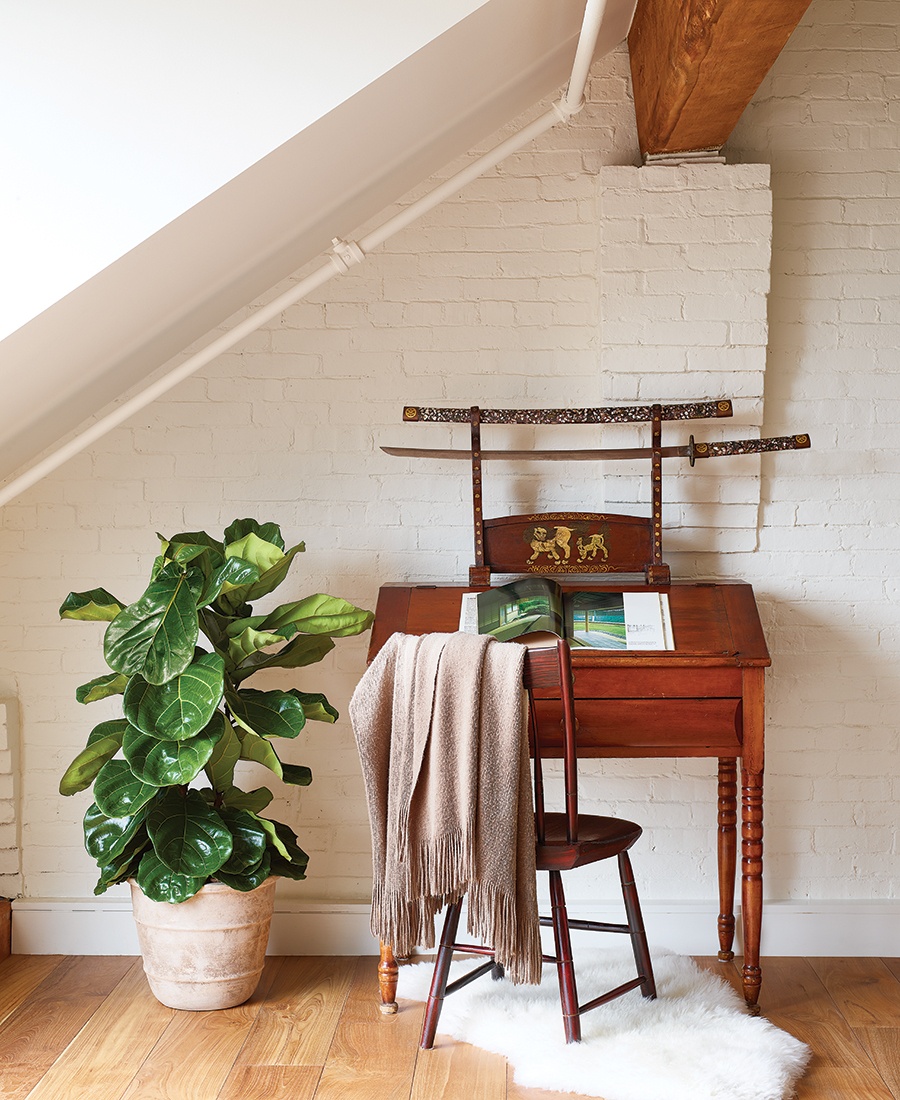 A classic antique writing desk offsets a playful area rug at the base of the stairs. / Photo by Jared Kuzia 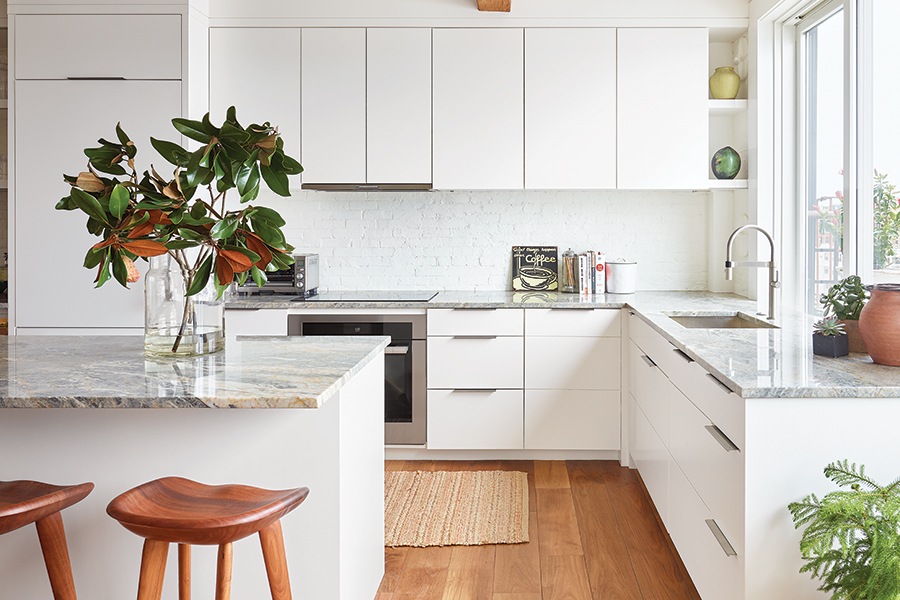 In the kitchen, walnut barstools by Craig Bassam complement the quartzite-topped island and add a solid note to the light-filled space. / Photo by Jared Kuzia 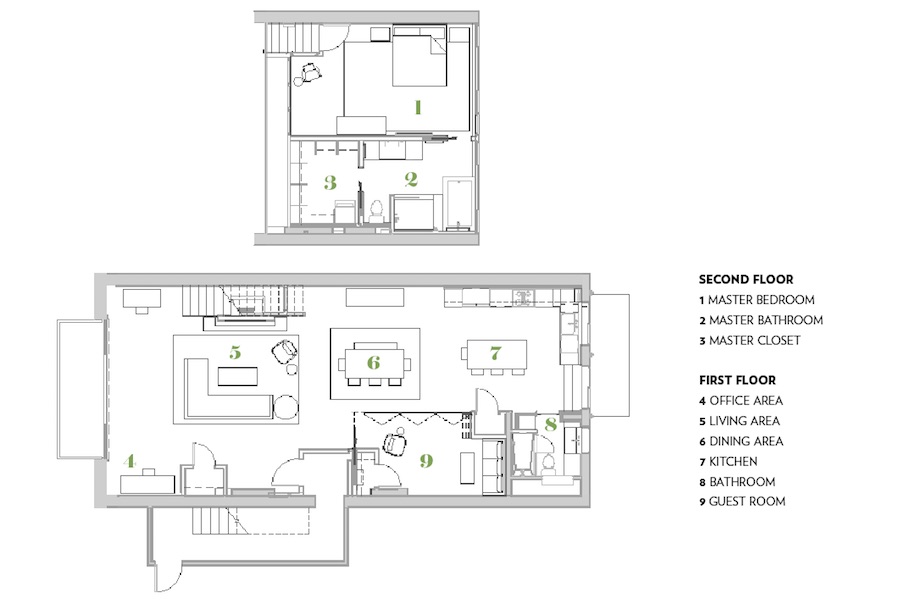