It’s a reproduction of a pin given to attendees of the building’s opening ceremony in 1969. 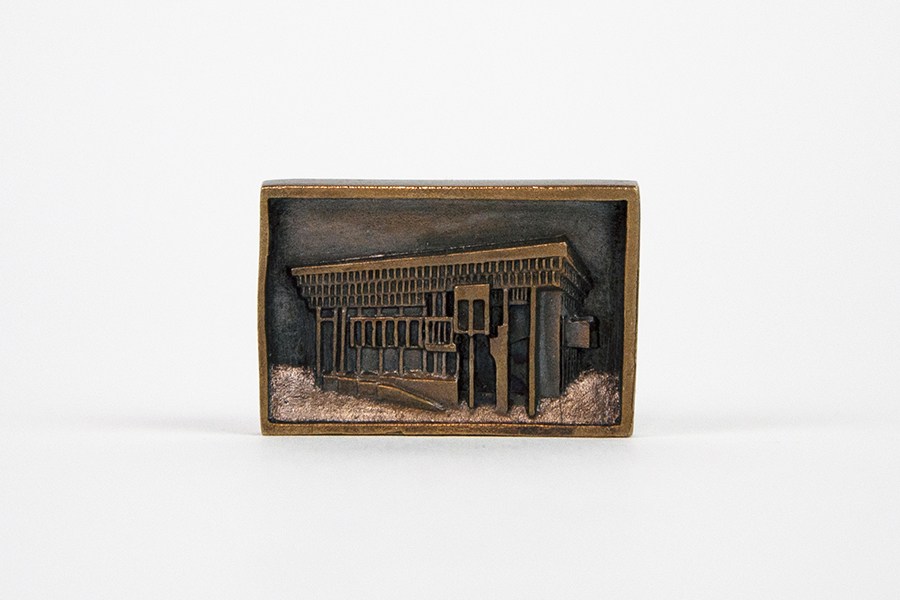 Fifty years ago on Sunday, Boston City Hall, the Brutalist masterpiece people love to hate, officially opened to the public. The week of February 10, 1969, had a stacked lineup of events celebrate the occasion: Receptions, luncheons, and even a Boston Pops concert helmed by Arthur Fiedler sang City Hall’s praises—and tried their best to hush the naysayers. (Even at the time it was built, plenty of people criticized the building’s design.)

But the lucky, pro-Brutalist Bostonians who attended these opening events were gifted a commemorative metal lapel pin with a likeness of City Hall on it. And now, to mark 50 years since the concrete landmark’s opening, a limited edition reproduction of that lapel pin is being released.

Created by architect Chris Grimley and designer Shannon McLean, the pins are a tiny but mighty tribute to one of the city’s most controversial buildings. Grimley, a founding principal of the firm OverUnder and director of the pinkcomma gallery, is an ardent protector of City Hall’s legacy. He co-authored the Boston Brutalism bible, Heroic: Concrete Architecture and the New Boston, and created the Boston Brutalist Map in 2017.

“Given that attitudes toward the building have changed so much in the last few years, having something to wear to celebrate the building is an achievement,” Grimley says.

Grimley thought to reproduce the pins when he spotted an original in the office of Joyce Linehan, the mayor’s chief of policy. After years of researching the history of City Hall, he’d never seen one before.

“It was in plastic. I don’t think it had been worn or opened in a long time,” Grimley says. “So I was like ‘Do you mind if I look into doing a reproduction for the 50th [anniversary]? Because it’s a wonderful object and more people deserve to have one.’”

A total of 50 bronze pins are now on sale for $250 apiece. They were reproduced by Rhode Island-based Harrison Casting and hand-patina’d by Grimley and McLean.

“We decided that bronze was the right material to do it in because there’s a lot of bronze in the building itself,” Grimley says. “Concrete and bronze tend to go well together.”

Each pin also comes with a one-of-a-kind letterpress card engraved by Goosefish Press. Printed in gold ink, the cards are signed by Michael McKinnell, one of City Hall’s architects. 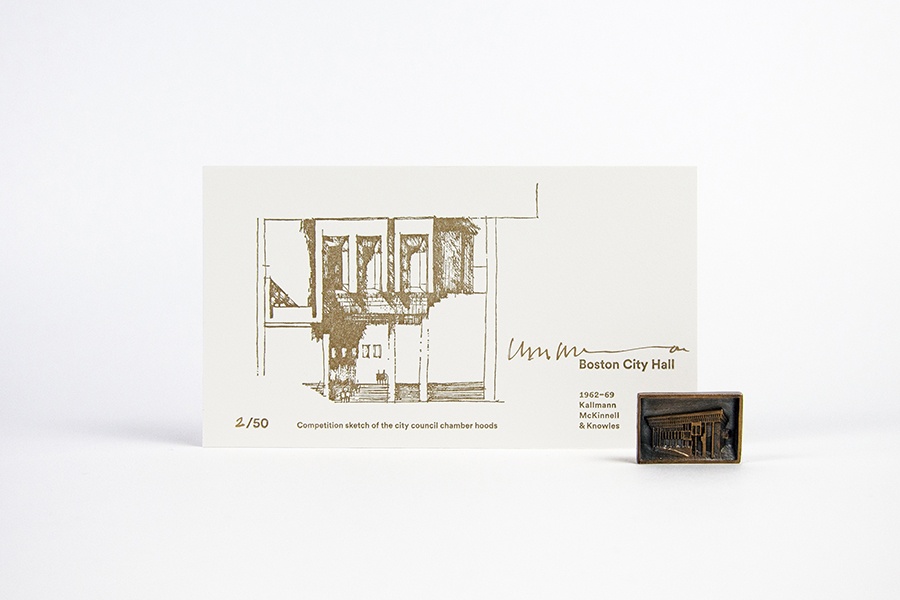 A portion of the pins’ sales will go toward docomomo US, an organization that seeks to preserve modern architecture, landscape, and design.

“To me, it’s one of the most significant works of modern architecture in the world,” says Grimley of City Hall. He says he hopes the pins and cards are appreciated and collected. “We’ve worked hard on the building’s legacy and we’re working hard to ensure its legacy.”

You can buy a commemorative pin of your own at overunder.co. 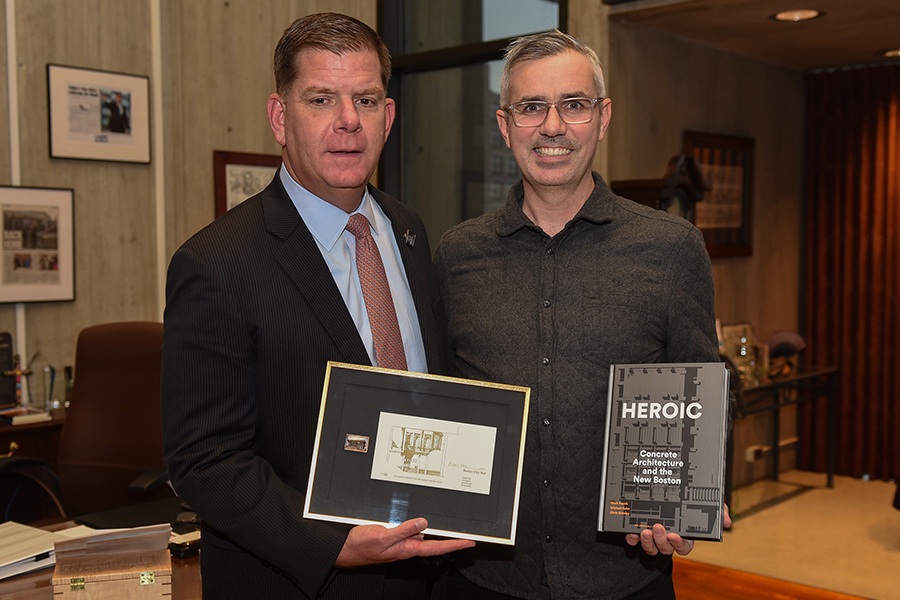 Mayor Walsh accepts the first of an edition of 50 pins from Chris Grimley. / Photo by Jeremiah Robinson for the City Of Boston