Meet the Pros Behind This Family-Owned Ironworking Shop 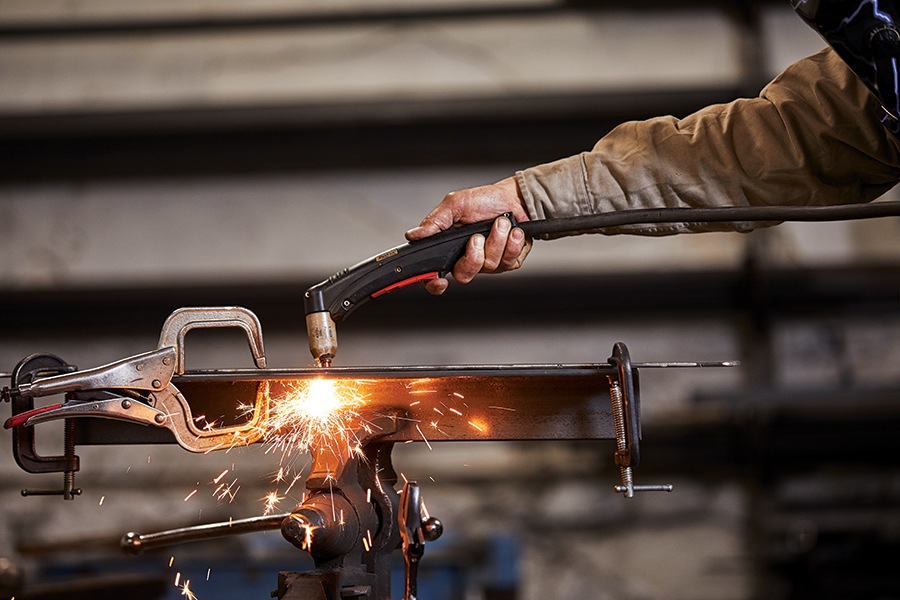 For a company that operates on a small scale, Amaral Industries produces some massive work. Located just feet from the Charles River in Bellingham, the ironworking shop designs, fabricates, and installs its intricate products—custom indoor and outdoor railings, gates, fireplace screens, fences, fire escapes, and even sculptures—for homes and businesses all over New England. The kicker? Amaral’s impressive output comes from just three employees.

But that’s just how it goes when you run a family business. Co-owners (and husband and wife) Eduardo and Alaine Amaral met as sculpture majors at UMass Amherst and started the company in 1997. They initially operated out of the basement of their Millis home, where they mostly produced industrial goods such as brackets and hardware. Within a year, they upgraded to the ornamental projects of their current repertoire and relocated to the space they’re in now, a 3,000-square-foot mill building—the oldest in Bellingham—that produced textiles during World War I. The number of employees changes year to year, but as of late it’s just Alaine, who handles operations and helps with design work, plus Eduardo and a younger craftsman, Christian LeCour, who fabricate and install 100 percent of Amaral’s products. “It would be nice to have one extra person in the shop,” Alaine allows, “but we’re creative people and we’ve managed to make a life out of being creative and making things. I feel very proud of what we’ve built as a business.”

Eduardo agrees. Even with all the challenges they’ve faced as a small company—from balancing a fledgling operation with a newborn baby to moving into the shop before it had running water (they cooled hot steel in buckets of water from the Charles, in case you were wondering)—he couldn’t imagine not starting Amaral when they did. “I’m glad that we were kind of naive; if I was a super business-savvy guy, we maybe wouldn’t have done it,” he says, laughing. “But I think we would have missed out.” 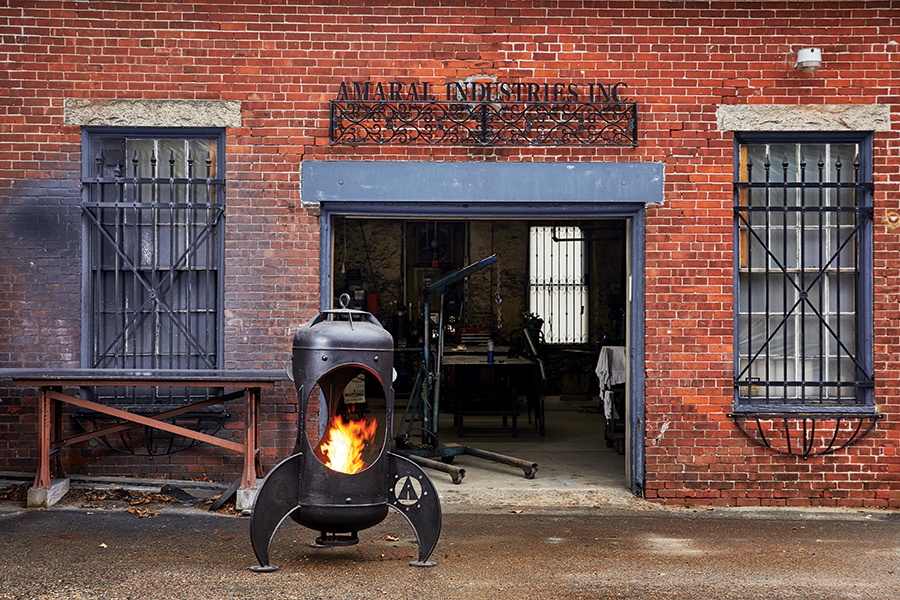 The company’s workshop sits inside a former textile mill in Bellingham. / Photo by Pat Piasecki 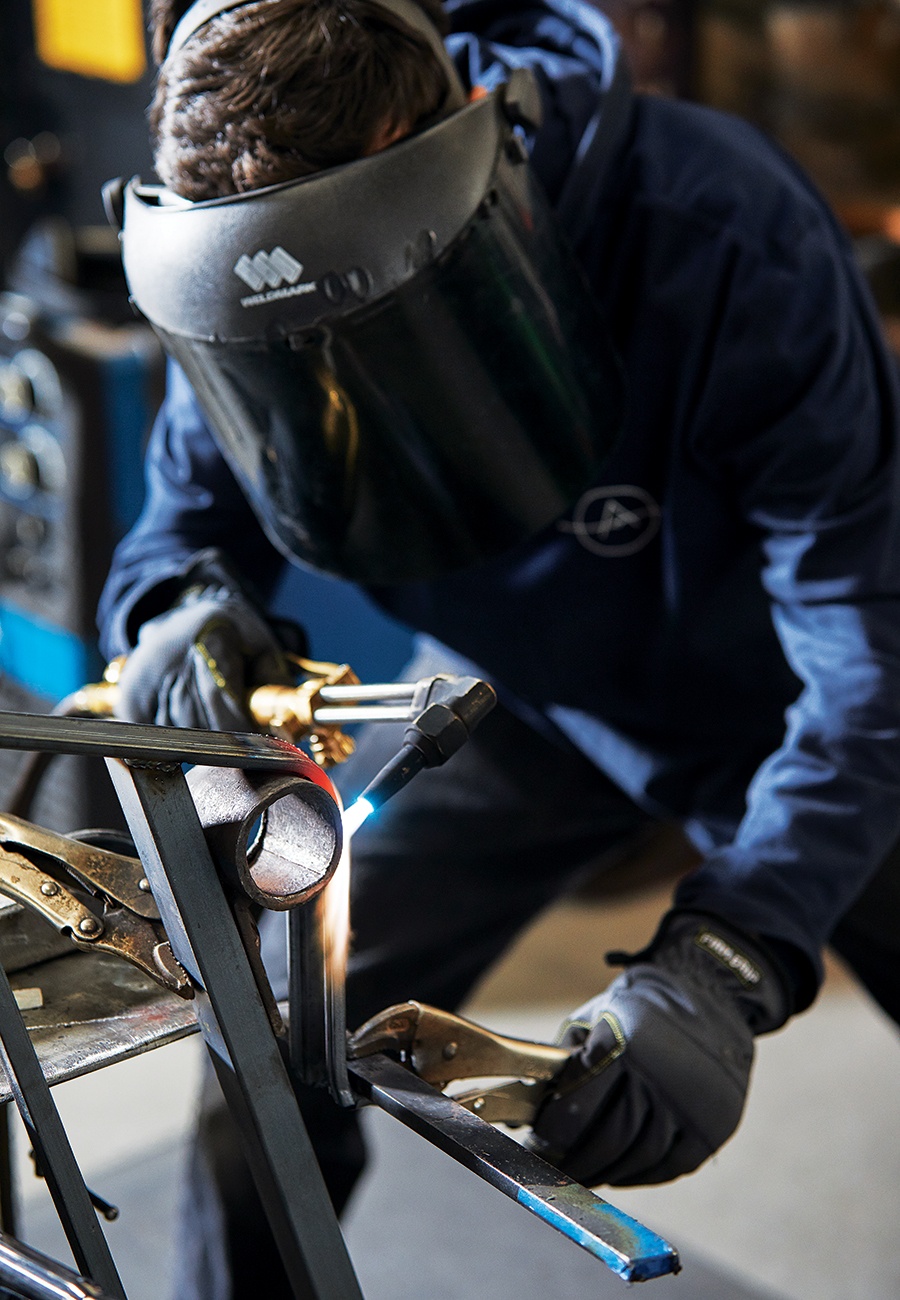 And no one could say that they’re not good at what they do. Their most popular items, ornamental rail sets, generally take a week to complete (two days to fabricate, three days to paint). Once an order comes in, Eduardo and LeCour visit the project site to take measurements and consult with the clients before drawing out a scaled project plan back at the shop. To kick off the building process, the pair cut 20-foot bars of mild steel (usually sourced from a company in Bridgewater) with a band saw or in an ironworker, which trims, bends, and stamps out scraps of metal. “It’s like the Cuisinart of the shop,” Eduardo jokes. Next, they bring the decorative pieces to the forge, where they heat and hand-shape each one individually with templates, hammering and adjusting pickets and scrolls as needed. “There are no settings—you are the setter,” Eduardo says. “You adjust things by eye and ear; if you need to bend something to 90 degrees, you listen to how the material sounds as it bends and know when to stop.”

When all the pieces are assembled, which can take a day or more depending on the scale of the project, Eduardo and LeCour weld everything together. After assembly, the (now grit-coated) rails go through the finishing stages, which include grinding, sanding, and wire-brushing. Amaral also paints its products in-house in “the dungeon,” Alaine says, using oil-based paints from Norfolk. Any jobs that require powder-coating get outsourced to a separate company, she explains. Finally, Eduardo and LeCour load up the finished railings and head back to the project site for installation. 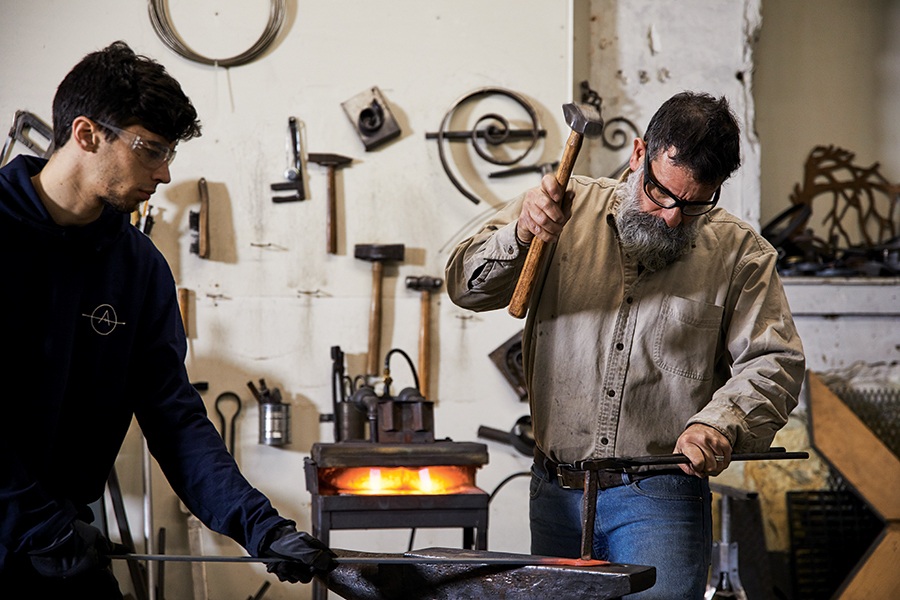 Eduardo and LeCour team up to hammer a fresh-from-the-forge piece of metal into shape. / Photo by Pat Piasecki 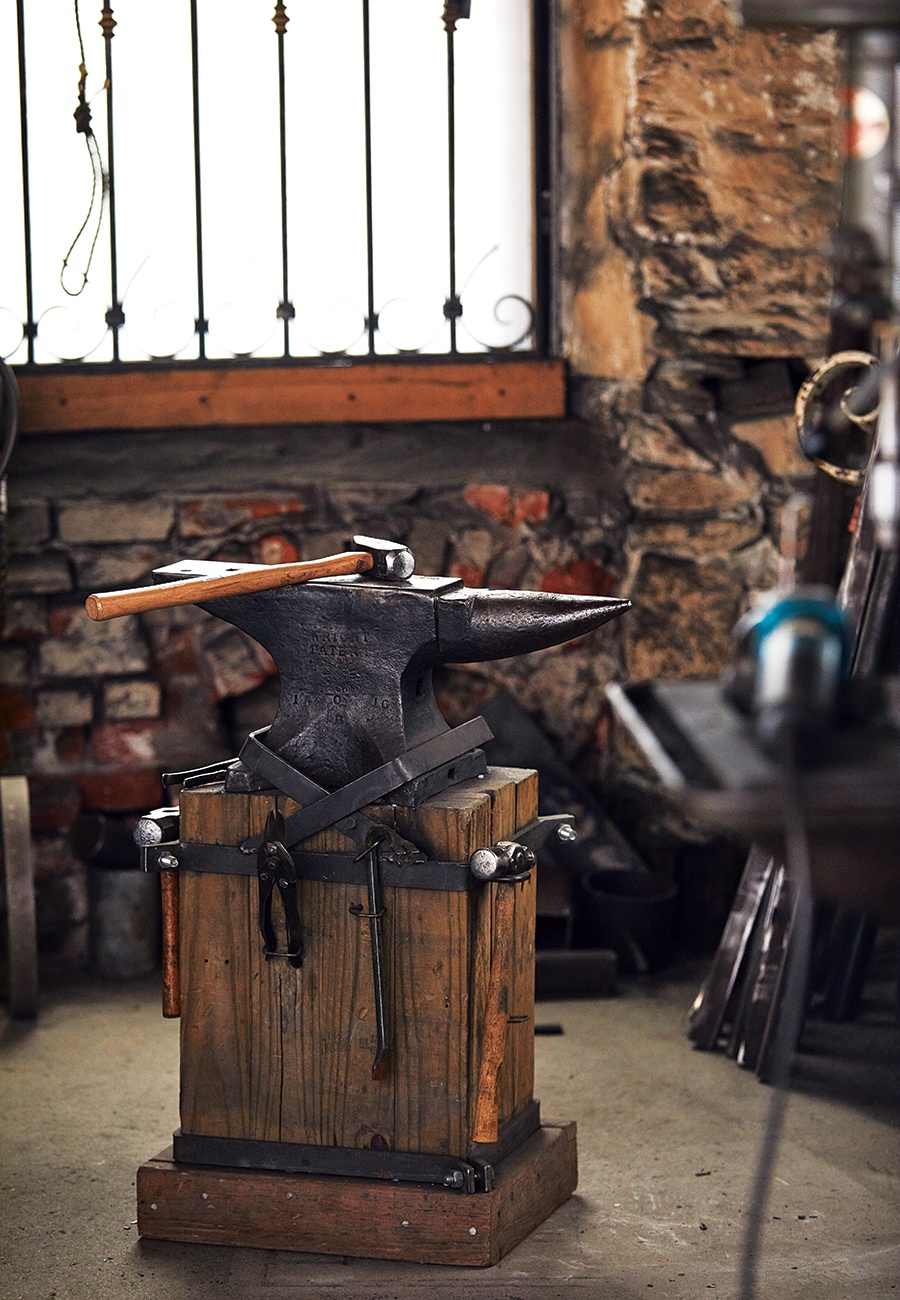 Although modern technology makes ironworking easier, some tools, such as the shop’s anvil and hammer, remain unchanged from the early days of blacksmithing. / Photo by Pat Piasecki

Although the railings are the flagship offering, asking Eduardo to pick a favorite Amaral product is like asking him to pick a favorite child. “I like making all the things we make!” he says. “It’s such a treat for me to be able to make things.” But, he admits—in perfect alignment with the company’s M.O.—perhaps the projects he enjoys the most are the ones he never thought he could do. “I’ll say ‘yes’ to stuff I’ve never done before and will probably never do again,” he says. “So you have to think and fabricate at the same time, and it’s super hard and drives you crazy. But when you look at the projects a year later, they become the benchmark of all the things that you can do.” 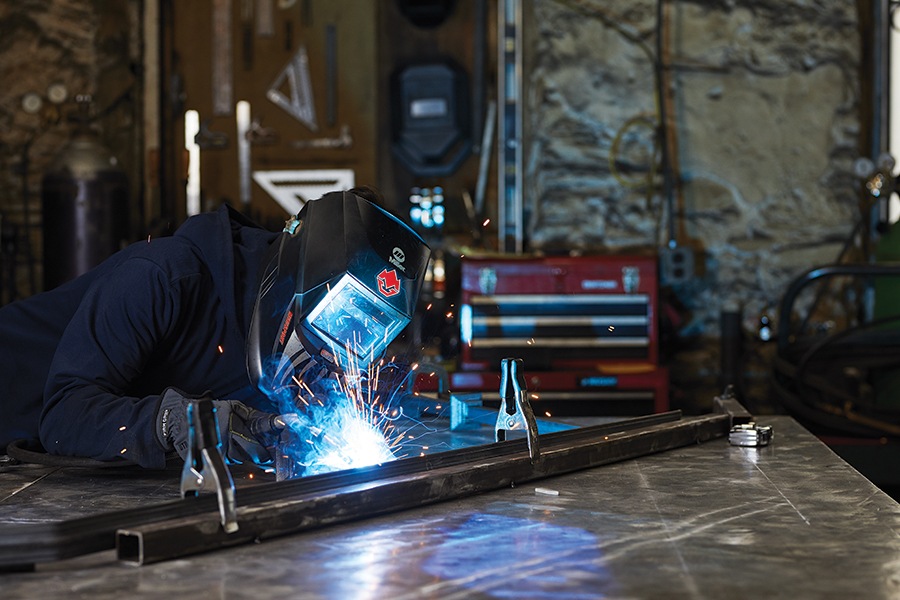 LeCour welding in the workshop. / Photo by Pat Piasecki 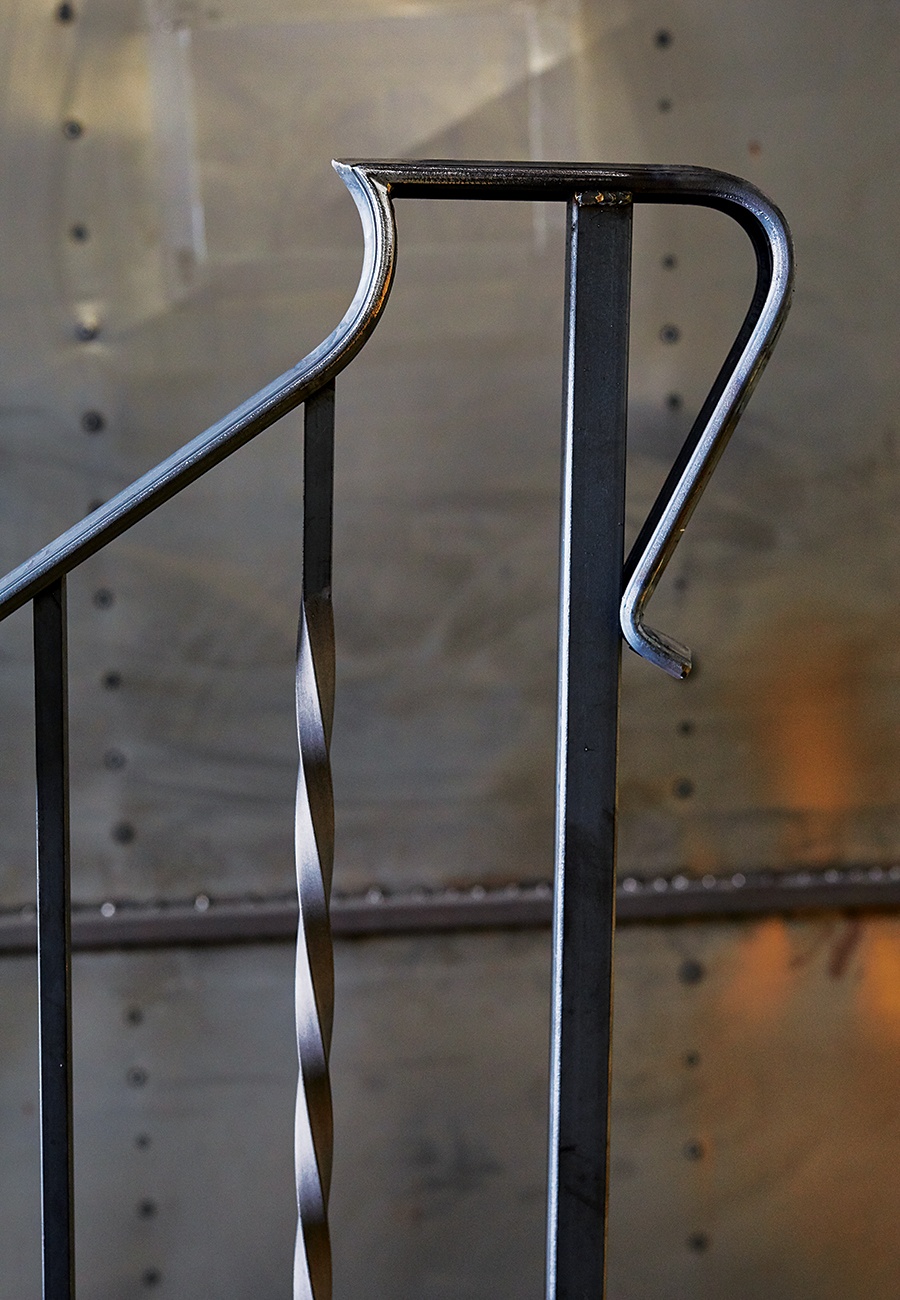 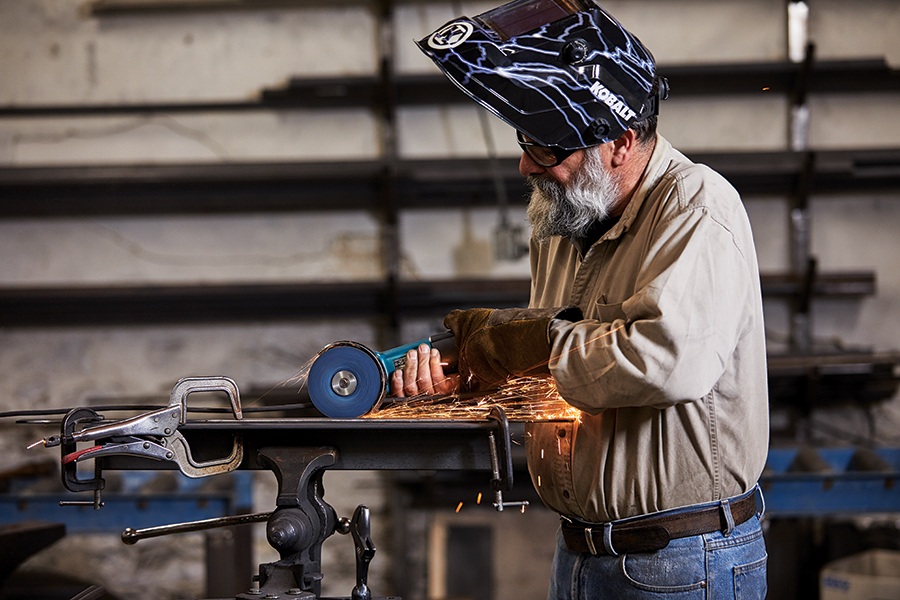 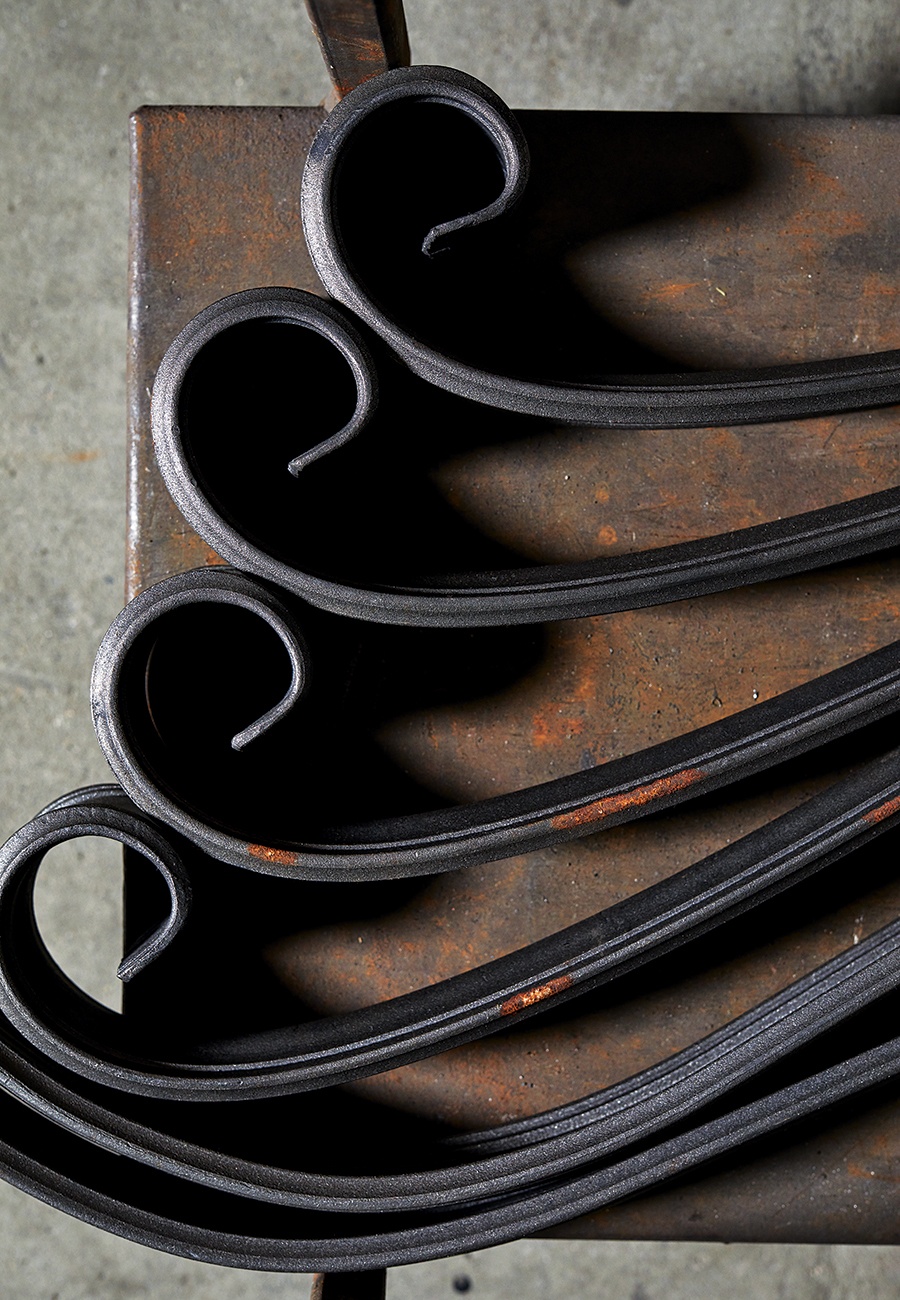 To form scrolls, Eduardo wraps rods of iron around custom templates, alternately heating and bending the iron in sections. / Photo by Pat Piasecki 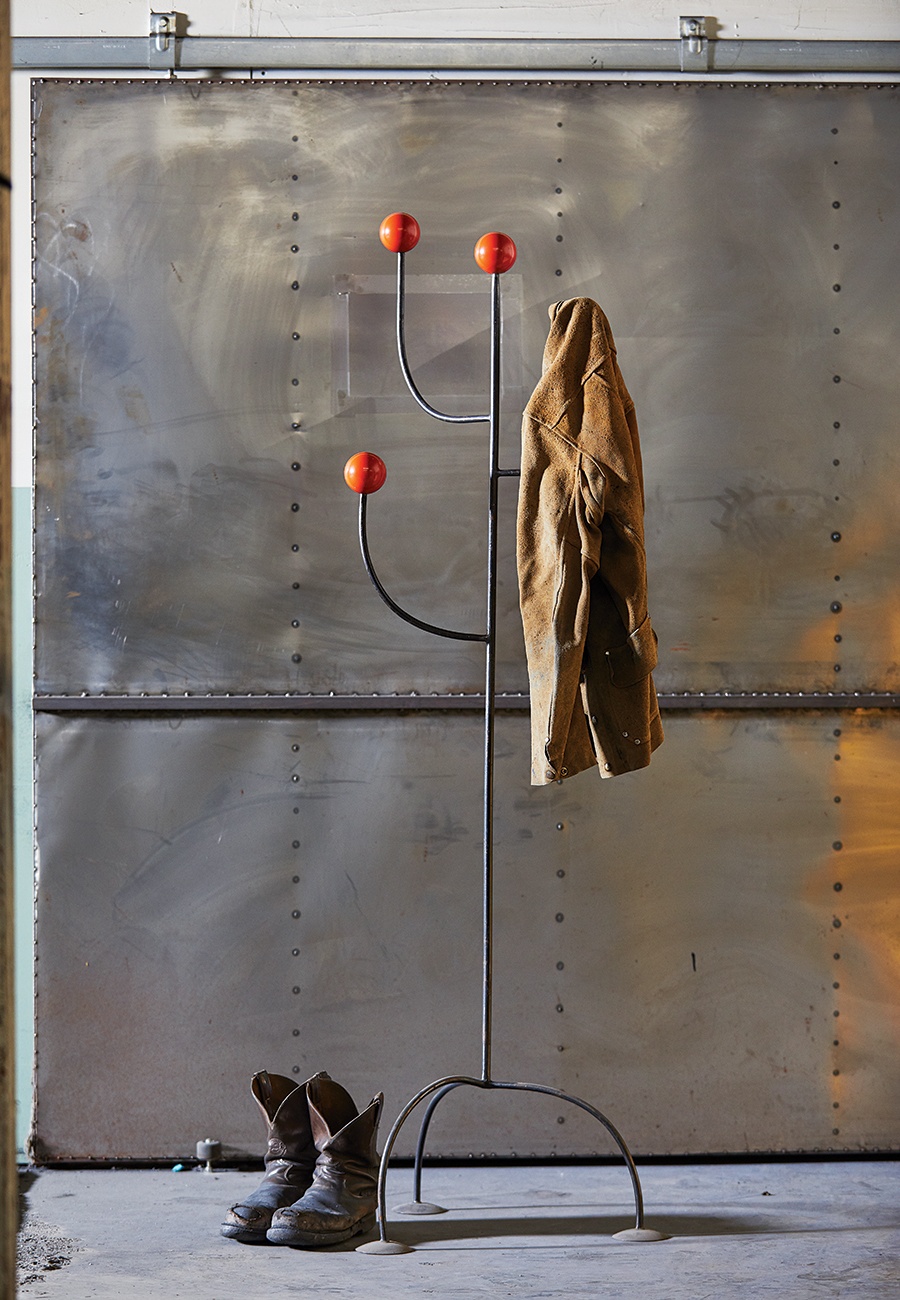 Although orders keep them busy, the Amaral team still has some time to create a fun piece or two, including the coat rack they keep in their shop. / Photo by Pat Piasecki 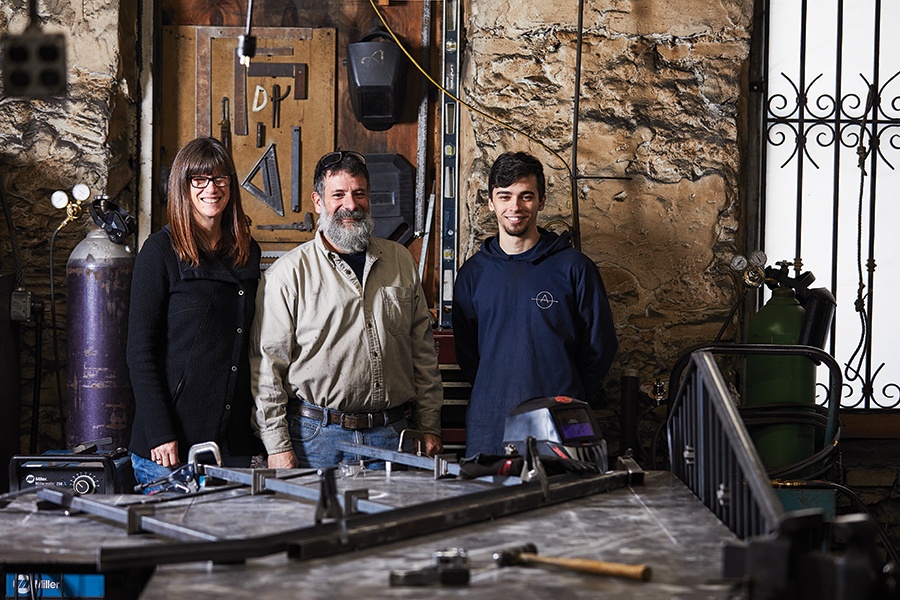 “This isn’t an easy way to make a living, but that’s what I enjoy about it,” Alaine says. “It’s really rewarding.” / Photo by Pat Piasecki