A Designer’s Coastal Abode Gets an Old-Meets-New Makeover

Designer Helen Bergin brings vintage pieces and global flair to her Marblehead home, once owned by a sea captain. 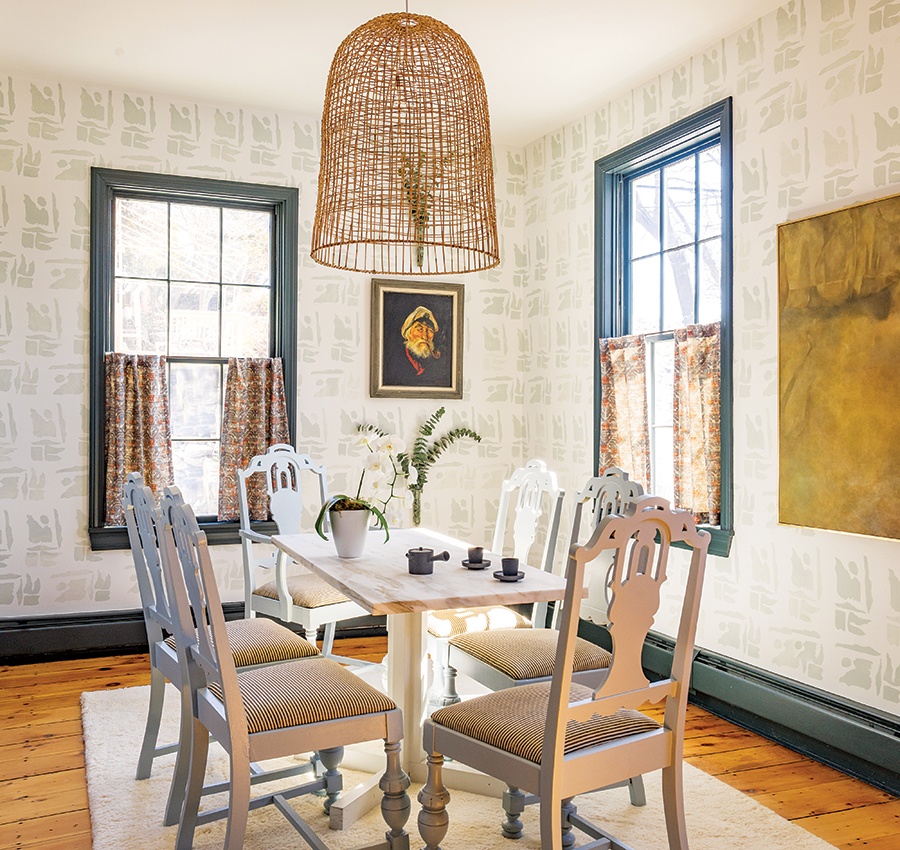 Bergin found the 1940s-era dining chairs at the Mills at Pulaski, then painted them in Farrow & Ball’s “Parma Gray” and upholstered the seats with a simple ticking fabric. The café curtains are made from Zak+Fox’s “Khotan,” a pattern that draws inspiration from exotic antique rugs. / Photo by Eric Roth

Rumor has it that designer Helen Bergin’s Marblehead home was once a brothel. “I’m told it was owned by a sea captain who made good use of its location—it’s the first house sailors saw when they entered the harbor,” Bergin says. “It could simply be town gossip, but either way, I’m sure our center staircase has more stories than we care to know!”

It was the staircase that gave Bergin and her husband, Matt, pause when they first considered buying the nearly 2,000-square-foot home, but for a different reason. The couple—who initially moved from the Back Bay to a nearby beach rental to try out coastal, suburban living—wanted an antique abode, but worried that its outmoded layout would feel claustrophobic. As it turned out, their fears were unfounded: Although the prominent staircase sits between the dining and living rooms, each of the rooms has two openings, which allow for an easy flow. The 8 1/2-foot-high ceilings—taller than typical for a house built in 1880—and the abundance of sunlight didn’t hurt either. In the end, though, it was the original pine floor boards that cinched the deal, along with the property’s 2,000-square-foot boathouse—a perfect spot for Bergin’s design studio.

The storied staircase welcomes guests as they step through the front door, which sits a mere three feet from the edge of the road, as old New England homes often do. Bergin chose Farrow & Ball’s “Studio Green” for the stairs and the rest of the woodwork. The intensely deep hue echoes the color of the neighborhood storefronts, anchoring the house to its surroundings, while a diminutive 1930s chandelier adds a trace of femininity to the masculine color palette. 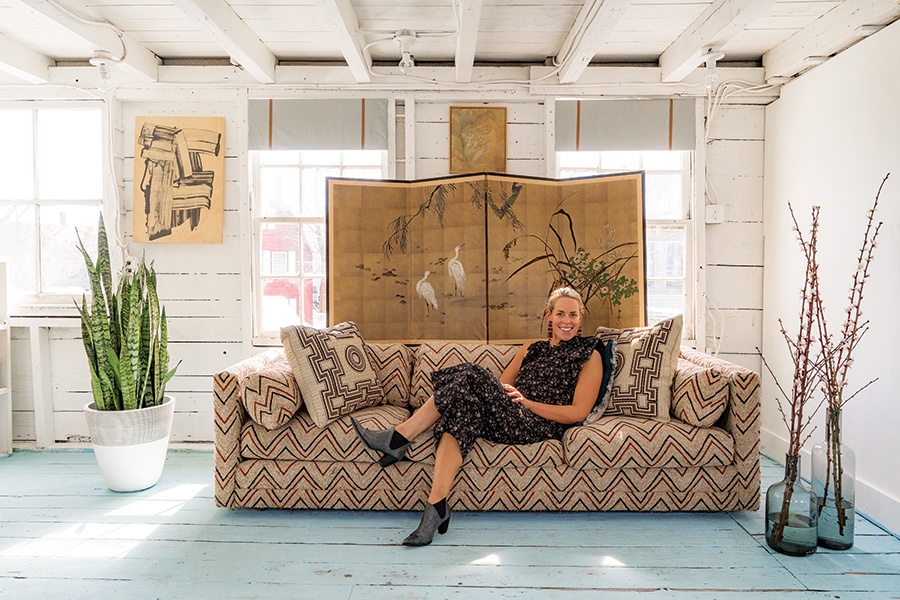 Bergin sits on a vintage Milo Baughman sofa in her studio, which also features a 1950s-era Japanese screen from Observatory in Cambridge and a small abstract painting by the designer’s great-aunt, Chloe Cleworth. / Photo by Eric Roth 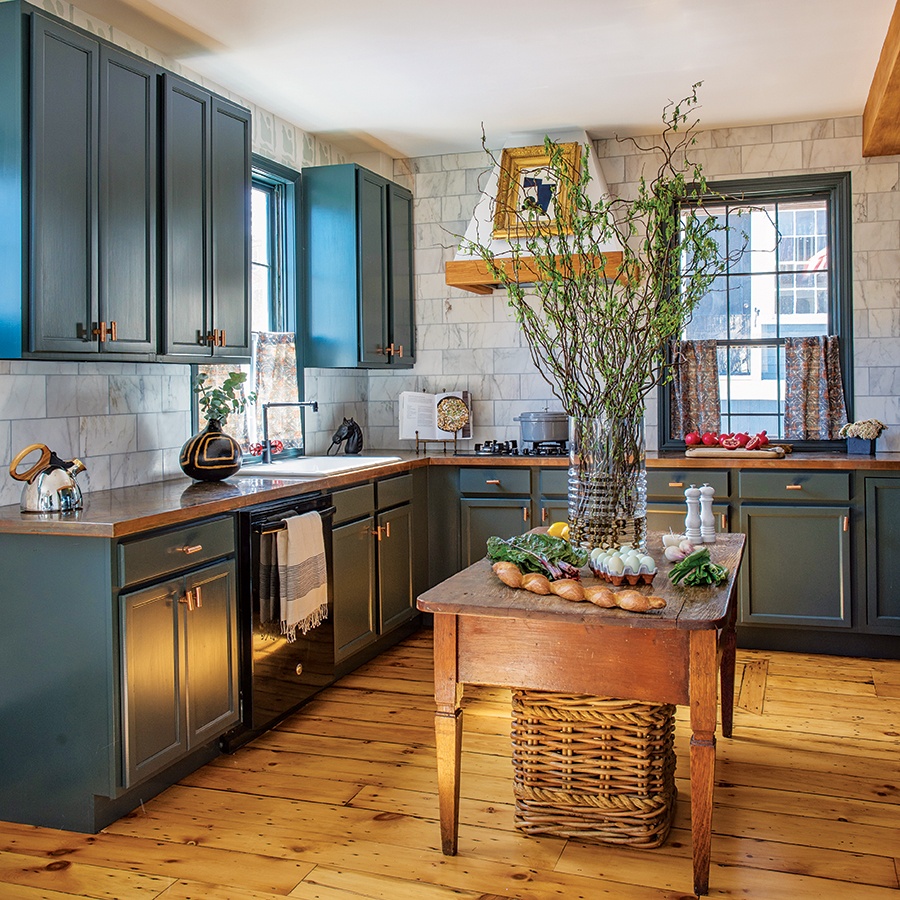 Large-scale Calacatta subway tile lines the kitchen walls, while a 19th-century table forms a handy prep space in the center of the room. / Photo by Eric Roth 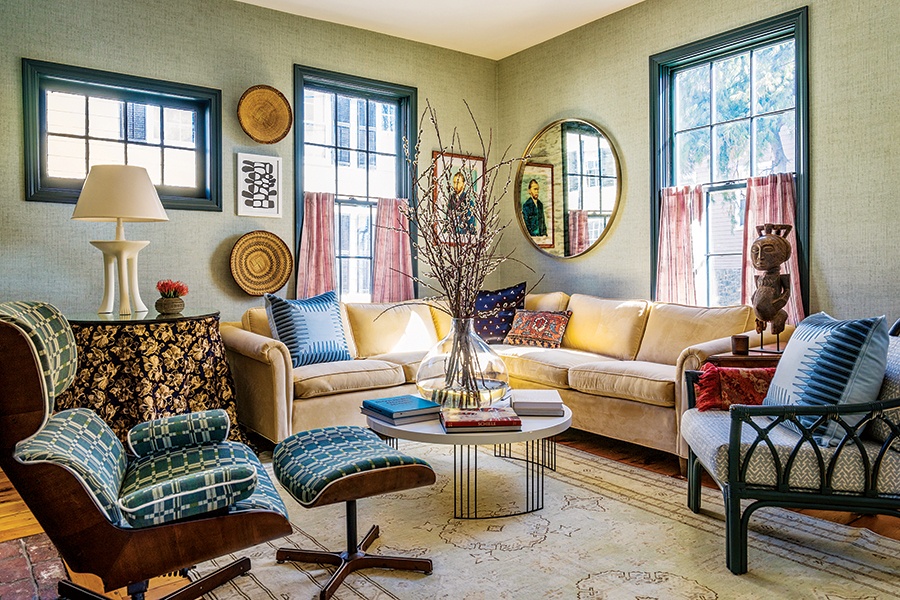 In the living room, a block print by Liz Roache hangs between handwoven African baskets, reflecting Bergin’s love for both travel and mixing pieces of various origins. The space also epitomizes her desire for homey comfort. “My goal was to crave coming [home],” she says. “At the end of the day, walking in [your] front door should provide a sense of calm and relaxation.” / Photo by Eric Roth

The transformation continues in the living room, just off to the right. Inspired by the work of famed designer Steven Gambrel, Bergin refinished the walls in blue vinyl grasscloth. For furnishings, she opted for a sectional that she scored on Craigslist, then reupholstered in performance velvet. “An L-shaped sectional with both sides even-steven made sense proportionally in the small, square space,” Bergin says. “Plus, my husband begged for one because they’re more comfortable.” From there, she layered in vintage pieces and globally flavored textiles to achieve the collected feel she loves. She upholstered a 1970s Plycraft lounge chair and ottoman, another Craigslist find, in a graphic fabric by Zak+Fox and painted a vintage rattan chair the same dark green as the woodwork. Feminine flounce comes from the gold-brocade-skirted side table that Bergin concocted out of a Badgley Mischka ball gown from her closet. “Honestly, it looks better on the table than it did on me,” she says.

The new-meets-old vibe extends to the revamped kitchen in the back of the house, which sports cabinetry painted the same color as the trim for consistency and drama. “The kitchen opens to the dining area, so I wanted to create a moody setting,” Bergin explains. “I didn’t want to stare at a bright white kitchen during dimly lit dinners.” The country table turned island, a ceiling beam clad in reclaimed wood, and copper countertops add age, character, and warmth. “People thought I was crazy to choose copper, but I got a sample, poured water on it, and left it outside,” she says. “I love how it patinas and how it pairs with the marble and dark green.” 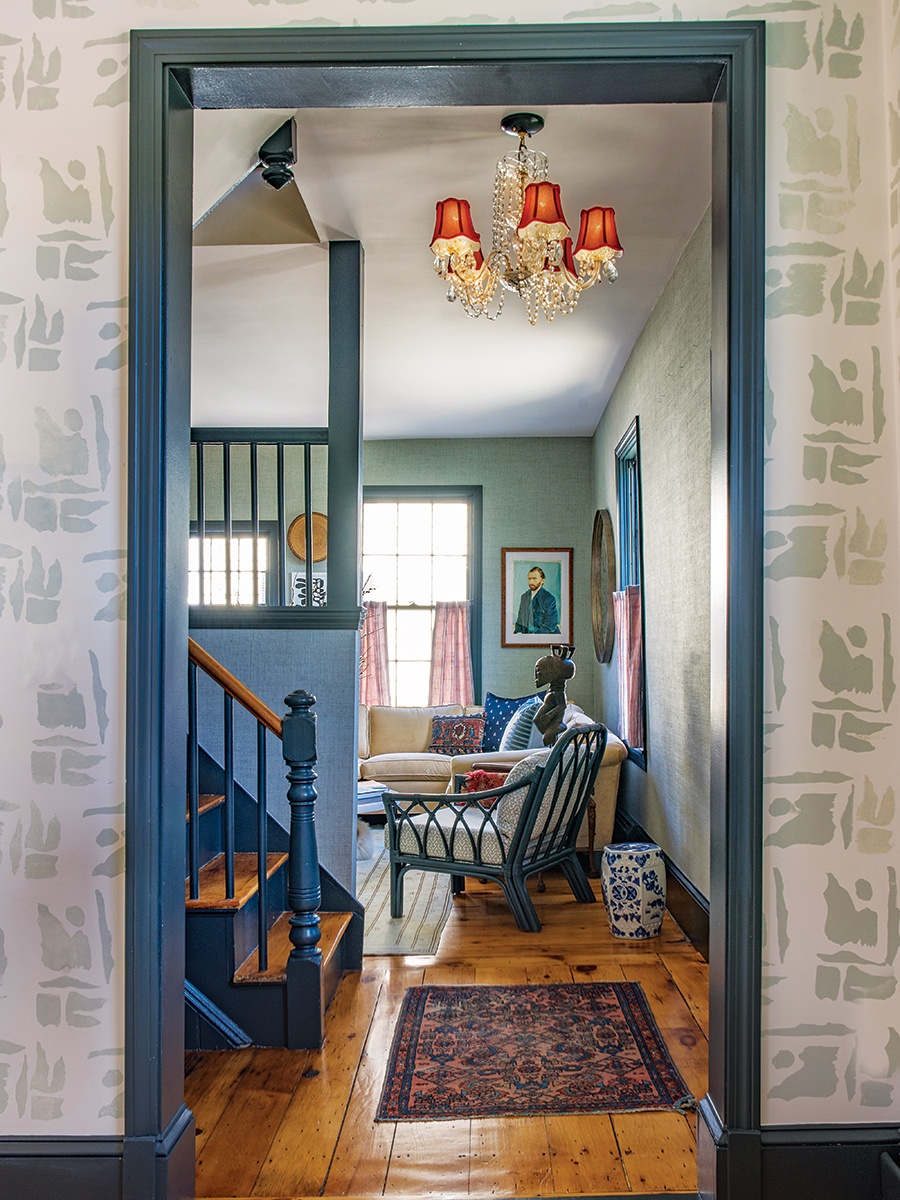 Accented with a custom burlwood frame, the portrait of Vincent Van Gogh in the living room commemorates the couple’s visit to the Van Gogh Museum in Amsterdam. The room’s striped café curtains, made from a John Robshaw Textiles fabric, provide privacy. / Photo by Eric Roth 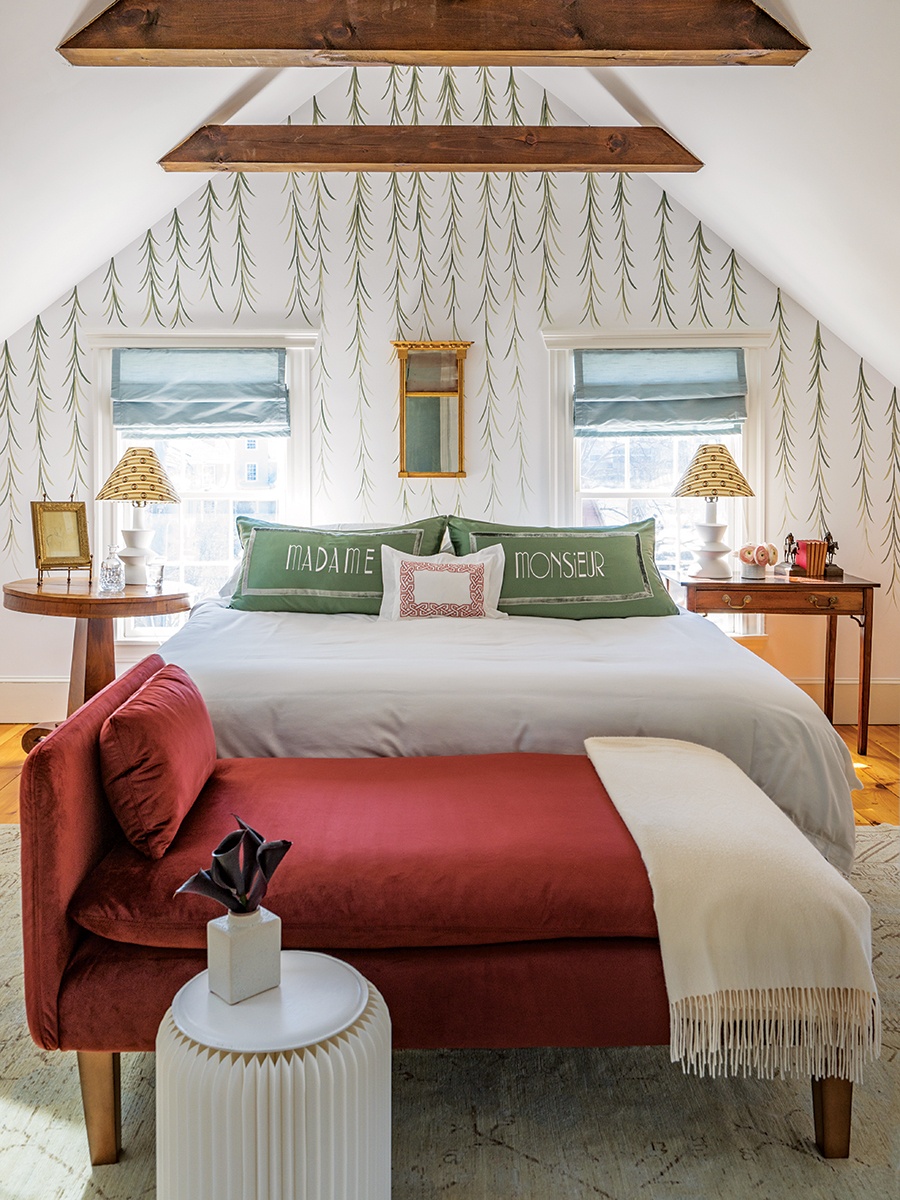 In the master bedroom, a gilded wood mirror from Bergin’s grandparents livens the space between the windows, dressed with taffeta Roman shades. Below, Marblehead-based studio Cece DuPraz embroidered “Madame” and “Monsieur” on silk pillow shams from Kumi Kookoon. “My husband is French, so this is my little homage to him,” the designer says. / Photo by Eric Roth 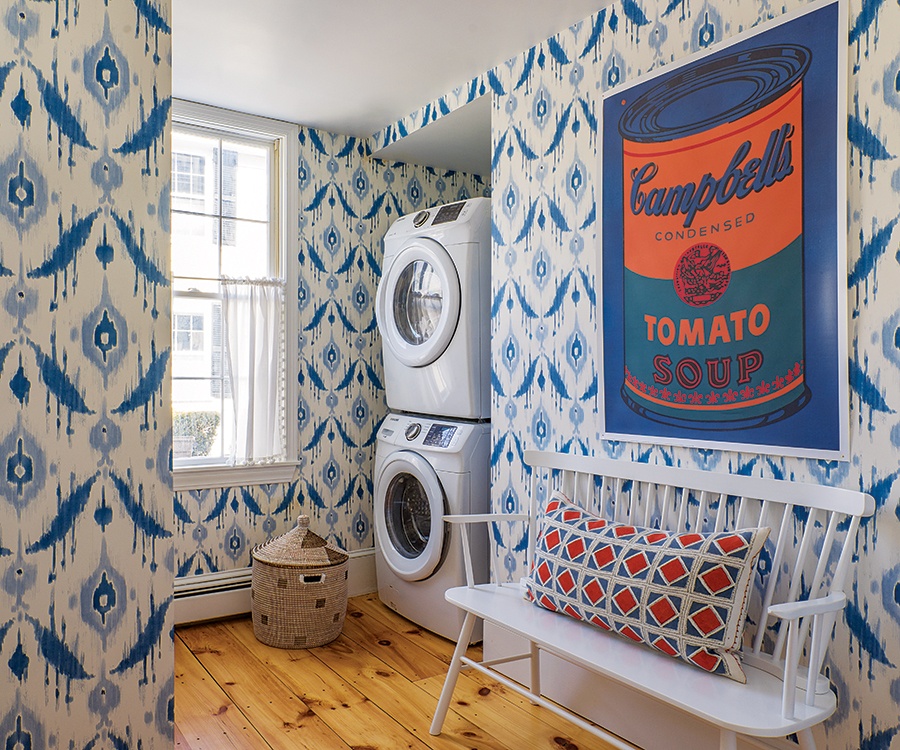 While Bergin wanted the view from the dining room to skew moody, she wanted the dining room itself to feel fresh. Having fallen for a wallpaper that didn’t quite work, she commissioned decorative painter Pauline Curtiss, of Lincoln-based Patina, to stencil a similar pattern on the walls. Keen to reuse the remnant slab of Calacatta gold marble she first bought as a tabletop for the couple’s Back Bay apartment, and then later used as a desk in the beach rental, Bergin found a 1920s-era wood base for it at the Mills at Pulaski, an antiques complex in Peabody. An oversize rattan birdcage pendant light feels airy above it, and behind it, a sea captain portrait pays homage to the original owner of the home. “I just love this guy’s grin,” Bergin says.

The couple enjoy entertaining and hanging out on the main floor, but when it comes time to retreat, they climb two sets of stairs to the master bedroom, a magical aerie under the eaves complete with a view of the harbor. Taking advantage of the A-frame construction with wood beams, Bergin asked Curtiss to paint weeping-willow branches—a nod to the tree in the yard of her childhood home—on the wall behind the bed. “It was so soothing for me,” she says. “I wanted it to have a presence here.”

The couple hasn’t done much on the second floor, but there’s an extra bedroom at the top of the stairs that needs to become a nursery. Fast. “We are expecting a baby girl in three weeks!” Bergin reveals. Her initial idea for a marigold-and-peacock scheme went out the window when she brought home artwork picturing a red billboard with the words “I like you a lot” surrounded by green palm trees. It will be the room’s centerpiece, along with a giant suzani in a serendipitously similar palette that’s been collecting dust in the boathouse. “So I thought, why not carry on the green, blue, and pop of red that I have going on in the rest of the house?” Bergin says. “Birthing pains have started to kick in, so it’s time to pull the trigger!” Before she knows it, little Baby Bergin will be making her way down that central staircase, adding another chapter to the tale-filled home. 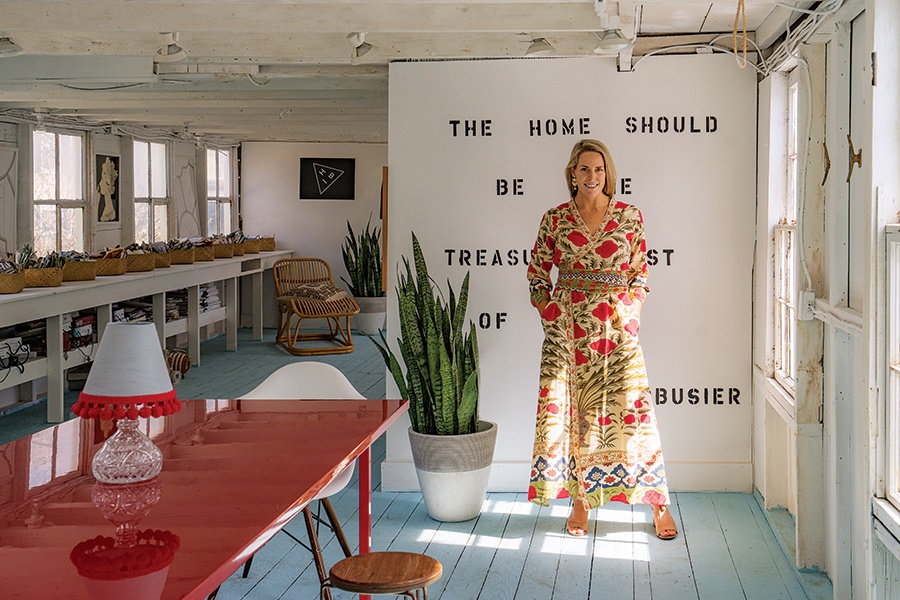 Behr’s “Balboa” paint covers the studio floor. On one wall, a hand-stenciled Le Corbusier quote reads, “The home should be the treasure chest of living.” / Photo by Eric Roth 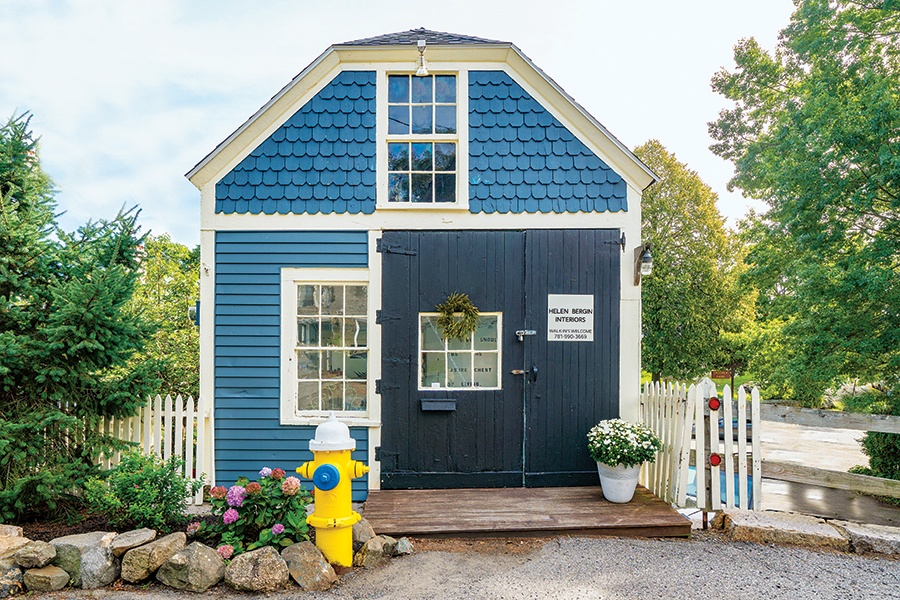 Rumored to be where the first famous Boston whaler boats were built, the 2,000-square-foot boathouse at the back of the property holds Bergin’s design studio. / Photo by Eric Roth 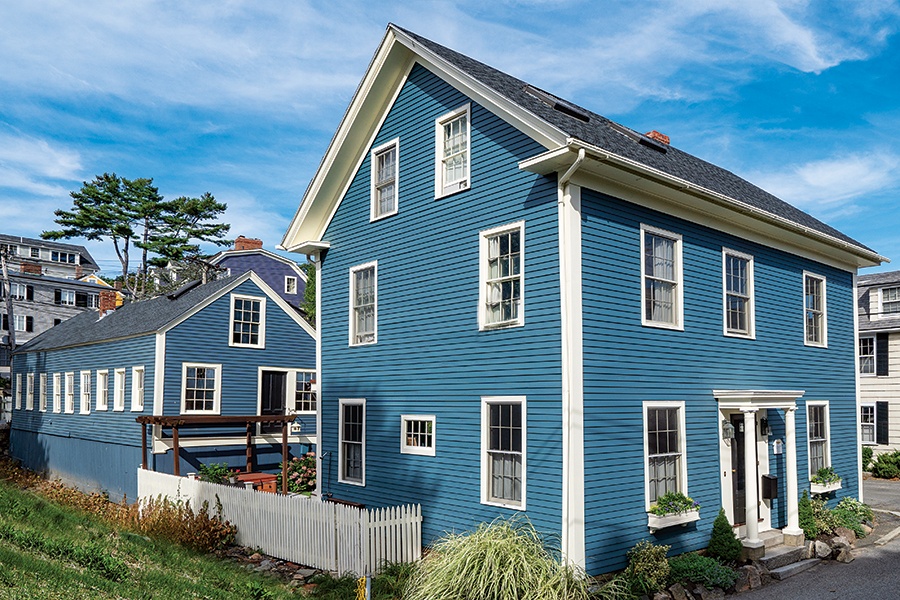 The home sits in the heart of historical downtown Marblehead, which Bergin likens to Nantucket. “It’s very walkable and feels super coastal,” she says. / Photo by Eric Roth 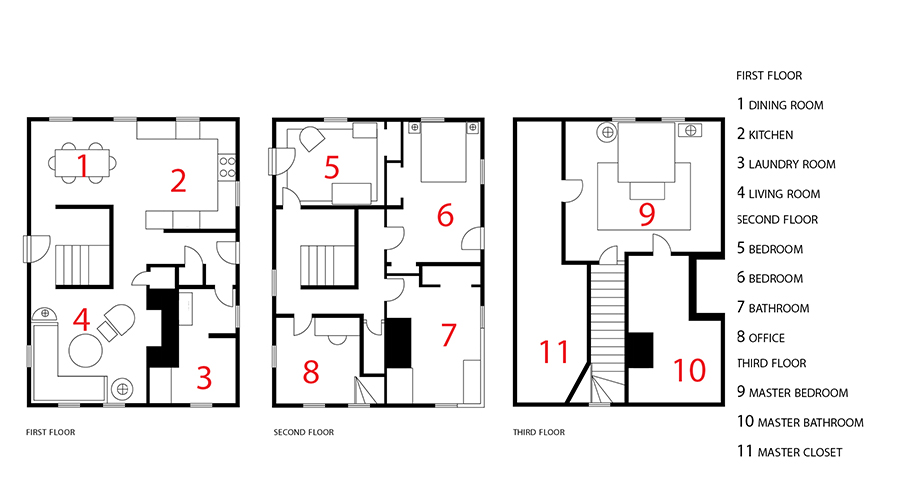