One surprising tidbit? The sheer number of people who work there. 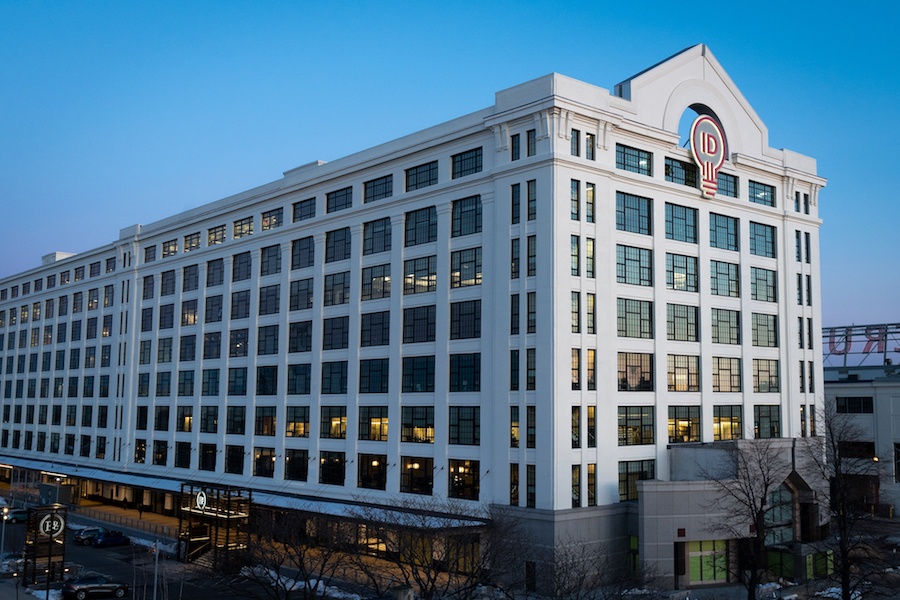 The Innovation and Design Building has taken on a multitude of names and identities over the course of its 100 years. The constant, though, has been movement and progress. “The building was designed to export goods, and now as an innovation hub it is doing the same thing with technology and media,” says Michael Phillips, president of real estate firm Jamestown, which owns the IDB. “It’s interesting that the building today is doing something that it was doing in 1918 in a very 21st century way.” Change hasn’t stopped at the IDB, and renovations to the building (including the lobby of the Boston Design Center) are ongoing. As we look back at just how much the building has transformed on the heels of its 100th birthday, here are 10 things you probably didn’t know about its past and present. 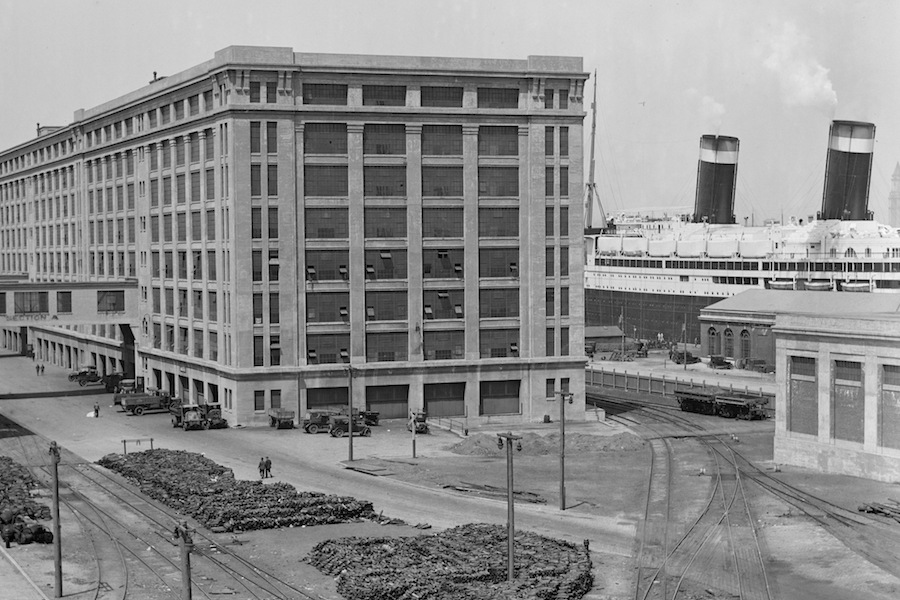 1. The U.S. Department of Defense built the sprawling structure—dubbed the South Boston Naval Annex—on mud flats in 1918. Its purpose? To store military supplies for the South Boston Army Base.

2. During World War II, the warehouse was staffed with 50,000 workers who were tasked with fixing and refurbishing naval ships as well as allocating army goods. 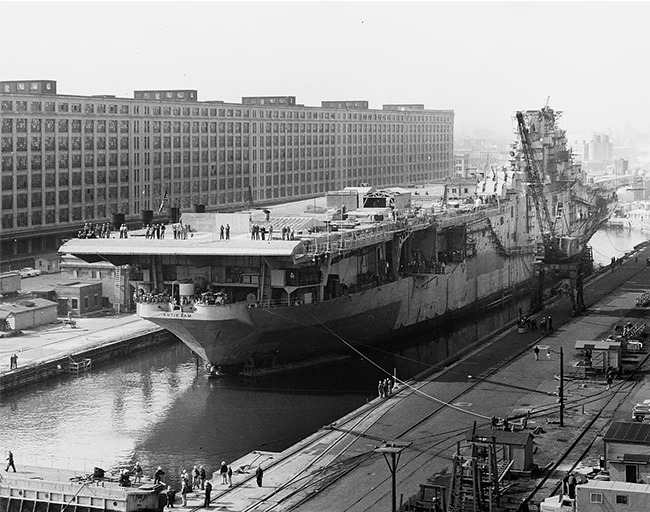 3. The Department of Defense sold the building and the surrounding 191-acre property to the City of Boston in 1983. The waterfront region became the Boston Marine Industrial Park, now called the Raymond L. Flynn Marine Park, and the city redeveloped part of the building into the Boston Design Center.

4. Real estate investment and management company Jamestown L.P. purchased the property in 2013 and spent $150 million on renovations. The bulk of the funds ($42 million) went toward upgrading around 1,000 windows and renovating the building’s façade. 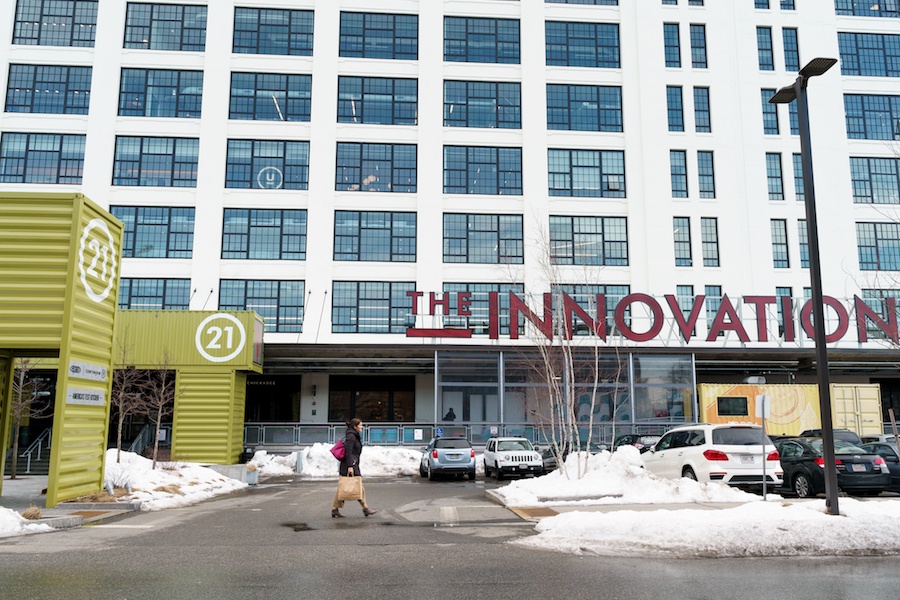 5. The building spans 1.4 million square feet—roughly the size of the Prudential Tower laying on its side.

6. The Innovation and Design Building isn’t actually one building: Its two adjoining buildings, which, until Jamestown bought the space, were known separately as the Bronstein Center and the Boston Design Center.

7. You probably head to the Innovation and Design Building to stroll around the Boston Design Center’s 350,000 square feet of showrooms—but that’s actually only a small part of the IDB. In fact, 75 percent of the building is actually occupied by industrial businesses, 10 percent of which are marine manufacturers. 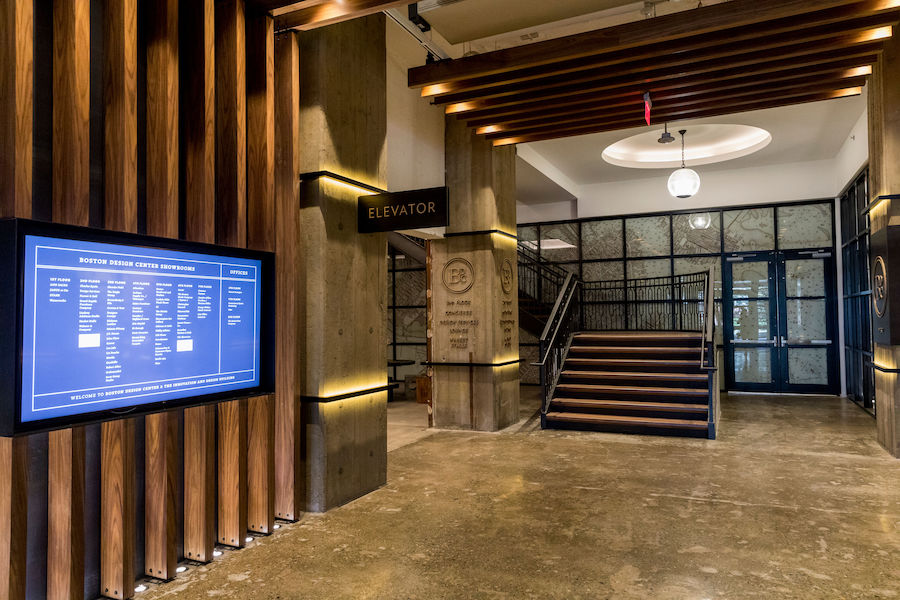 8. With Reebok, America’s Test Kitchen, Elkus Manfredi Architects, MassChallenge, and more than 200 other businesses onsite, some 3,400 workers report to the Innovation and Design Building each day.

9. The IDB opened its “Canteen,” a cafeteria and gathering space, in 2015. Equipped with a garage door, it offers convenient access to Black Falcon Avenue—a popular stop for local food trucks.

10. In 2018, CRJA-IBI Group—a landscape-design firm based in Boston and Knoxville, Tennessee—received a Merit in Design Award from the Boston Society of Landscape Architects for its work on the IDB. The project focused on creating the urban “parklets” that occupy the space between Drydock Avenue and the building, as well as revamping the entryways by framing them with salvaged shipping containers.