Here’s a First Look inside the Langham Hotel, Set to Re-Open in 2020

The year-long renovation is taking the historical space in a totally new direction. 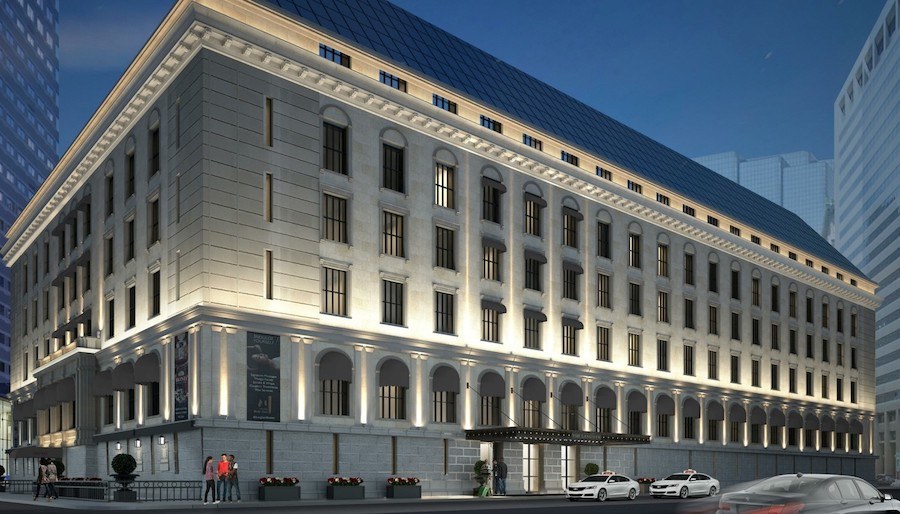 If you’ve taken a stroll around the Financial District this summer, you may have noticed that the doors to the historical Langham are closed. The cause? An $80-plus million renovation that kicked off in April and will span until next summer.

The overhaul been a long time coming: Though the hotel is known as one of the city’s most glamorous, it hasn’t received extensive upgrades since 1981. And, while the reviews have remained overwhelmingly positive throughout the years, more recently guests have begun to take notice of the hotel’s tired appearance (“Overall excellent but fraying around the edges” one such TripAdvisor reviewer wrote at the start of this year). Visitors are now getting what they’ve asked for, though, as Langham Hospitality Group works to bring the hotel up to 21st-century expectations of style and comfort—a move Langham Hospitality’s director of design and construction Jennyfer Lacroix says will “reposition it in the Langham portfolio to become one of the prominent properties we have in the United States.”

As a whole, the façade of the building, which was dubbed a Boston Landmark in 1978, will appear nearly unchanged when the renovation reaches its conclusion in 2020. The most notable transformation will take shape at the main entrance of the hotel, which will receive a new canopy and black awnings in place of its signature red ones. The exterior will also get modern uplighting to illuminate the building “like a monument,” Lacroix says. On the Post Office Square side of the hotel, the lobby bar (formerly called the Reserve) will receive its own street entrance, transforming the fortress-like stone structure into a more welcoming one. “We’re really trying to open up the building much more to the public and to the outside,” says Fiona Thompson, principal at Richmond International, the hospitality-design firm leading the overhaul. 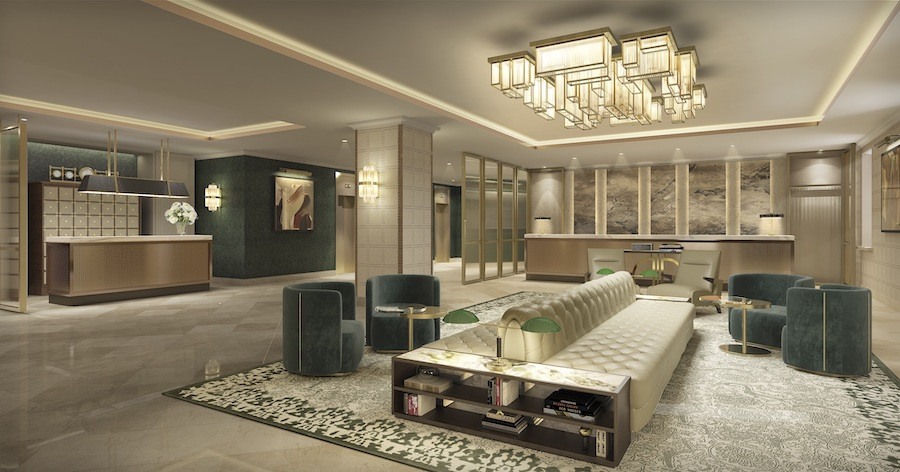 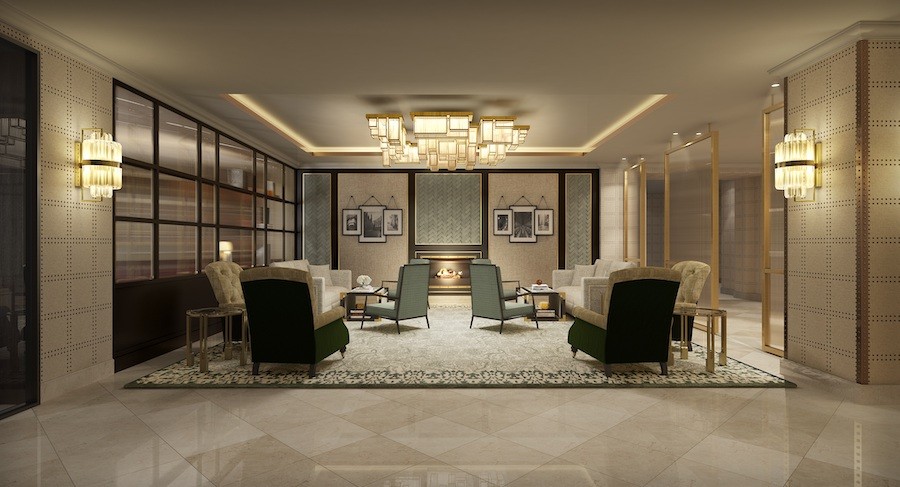 Once inside the lobby, guests will find a completely changed floorplan, with the reception and the concierge desks now both on the right side of the space. The lobby will feature subtle nods to the building’s history, including a color palette inspired by bank notes and, on either side of a chesterfield sofa, lamps befitting an old-fashioned bank teller. While waiting to check in, visitors will also be able to relax in a luxe living-room-like lounge space complete with a fireplace and handmade rugs. The new first-floor bar, previously situated in the lobby, will be separated from the space by a glass screen.

As for the accommodations? All of the hotel’s 300-plus rooms will be redesigned to take on a lighter, more modern look. For a homey feel, they’ll feature hardwood floors and paneled walls, and for some local flair, they’ll be dressed up with paintings and photographs by New England artists and cabinets inspired by old-fashioned travelers’ trunks. In many of the hotel’s bathrooms, which will be decked out with half-height marble walls and marble mosaic floors, the bathtubs will be swapped out in favor of spacious walk-in showers. They will also offer painted timber vanities with stone tops. “It just about trying to add those classical proportions and a residential quality: simple, clean, and light,” Thompson says. 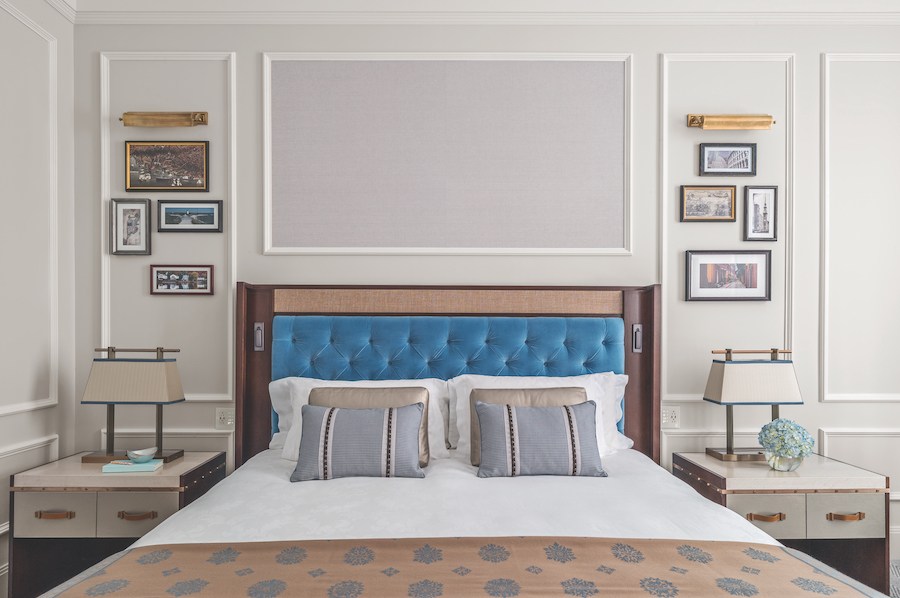 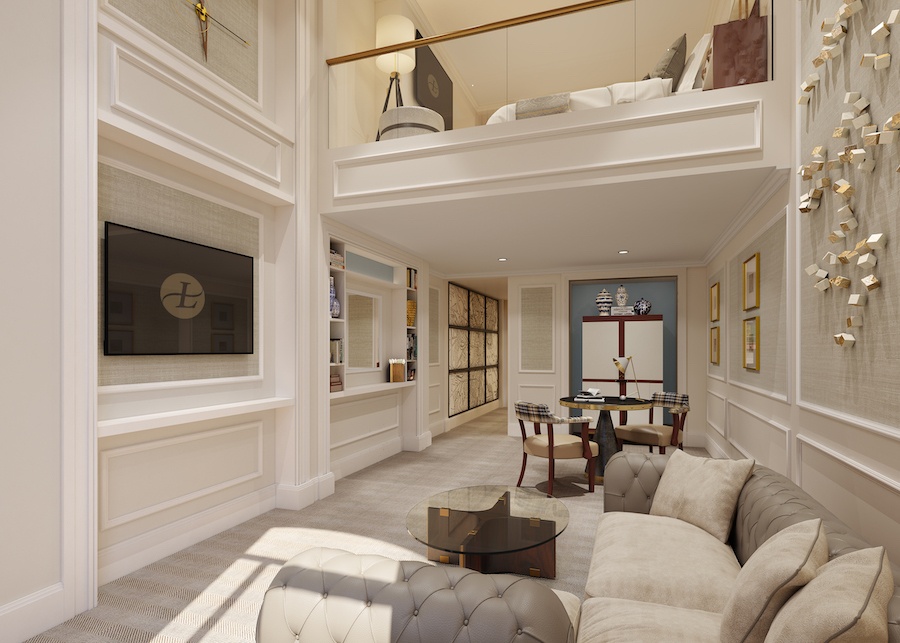 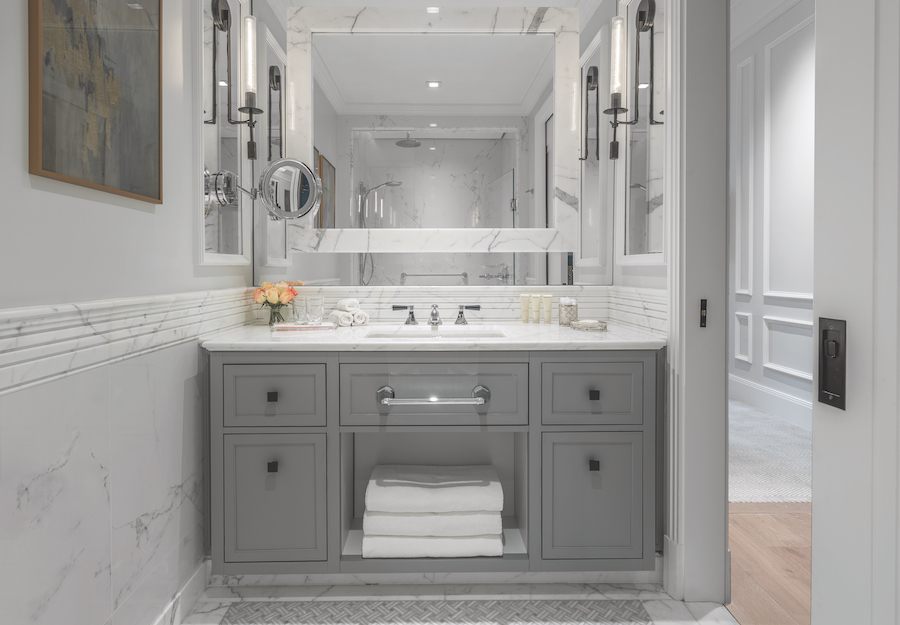 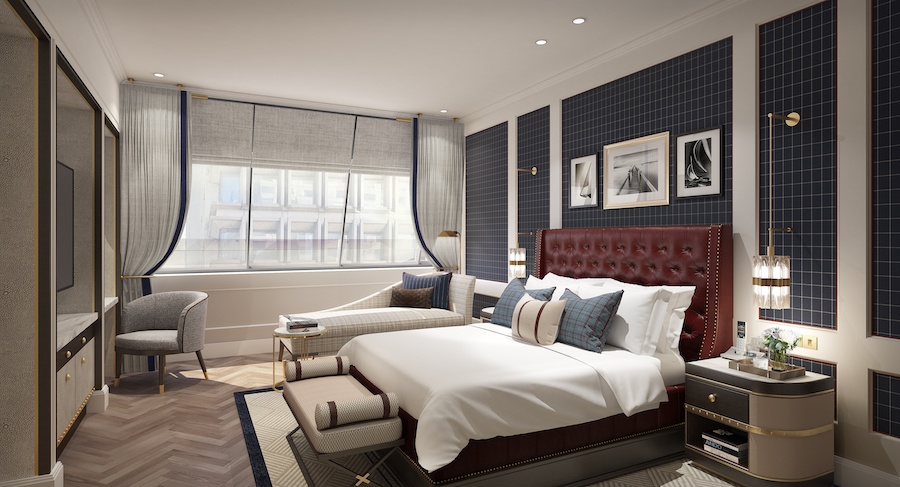 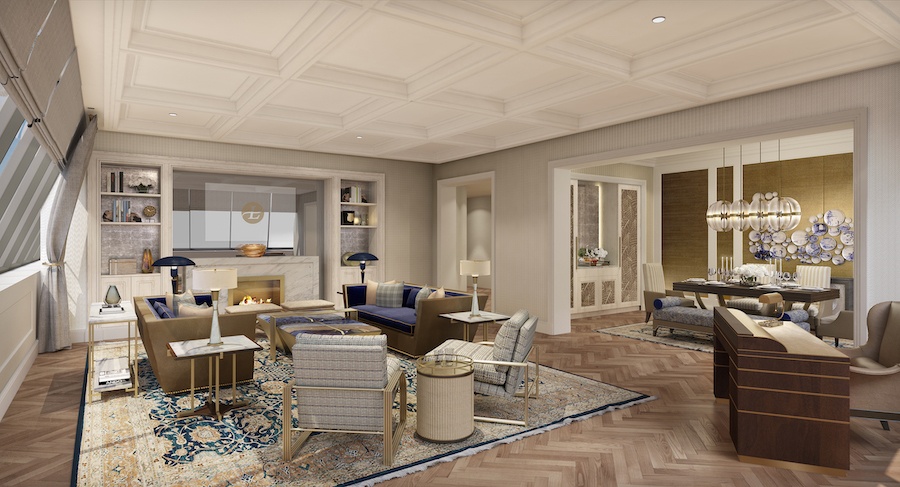 In addition to the hotel’s accommodations, major changes are also in store for its event, meeting, and communal spaces. The Wilson Ballroom will receive a major facelift, and the hotel will add a new ballroom—the Lincoln—in place of Café Fleuri, where the hotel previously hosted its famed Chocolate Bar brunches. The Langham’s Wyeth Room, which showcases murals by acclaimed artist NC Wyeth, will also be refurbished and upgraded with new lighting, as will the neighboring boardroom-style Governor’s room, which will feature plaid carpets and mahogany furnishings. Finally, the Langham will be adding a Club Lounge, which is designed to be inviting yet exclusive. The townhouse-inspired space, available to guests who purchase an upgrade to their room reservation, will be flooded with light and feature art deco-inspired furnishings and a buffet area with stone countertops. “It’s really all about positioning the hotel as a place of five-star luxury,” Lacroix says. 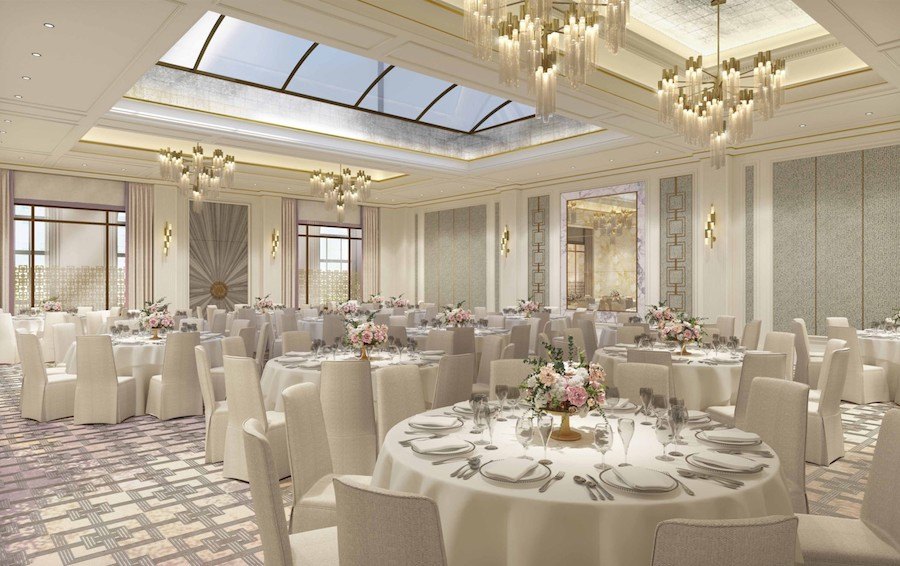 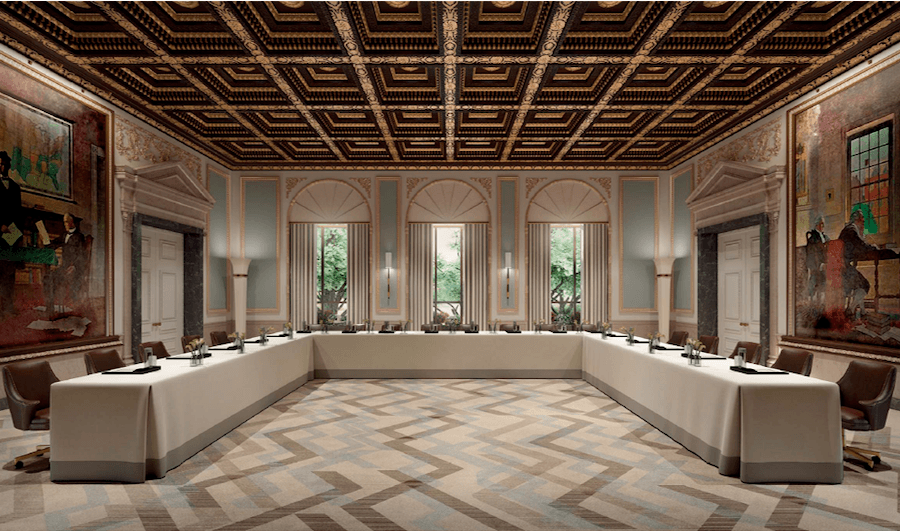 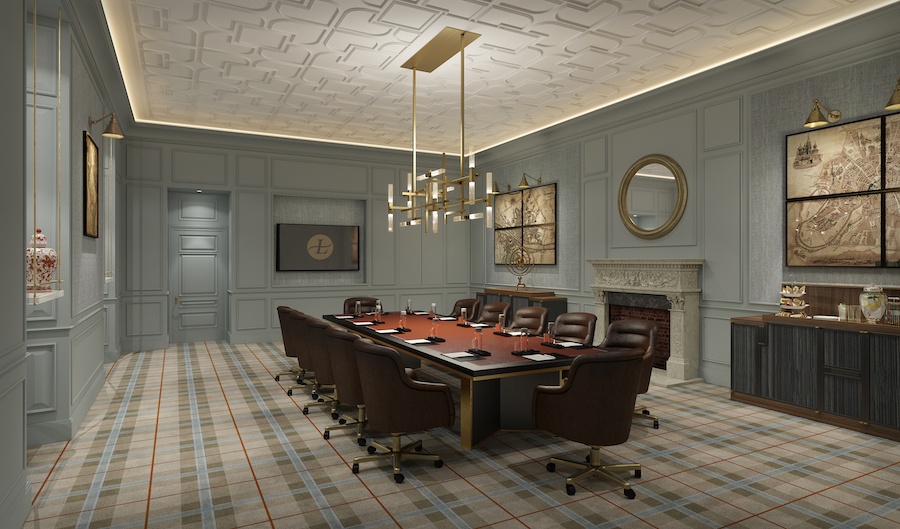 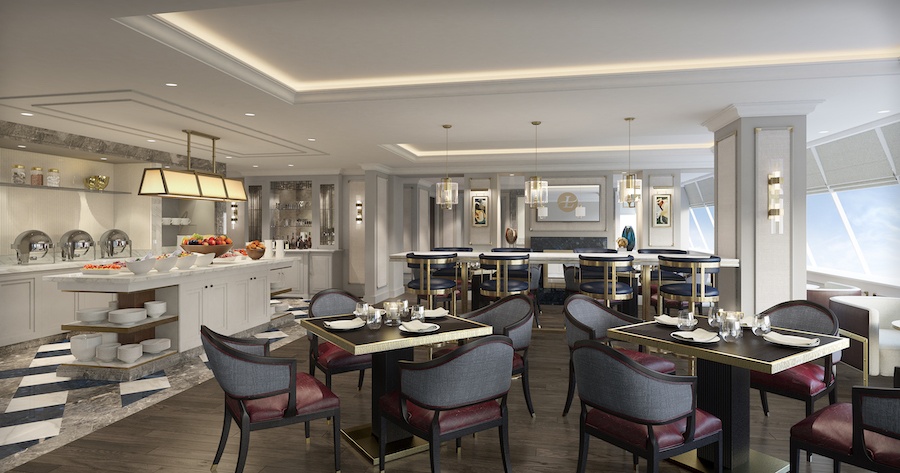