With help from Carpenter & MacNeille, they create their forever home on the tranquil shores of Gloucester. 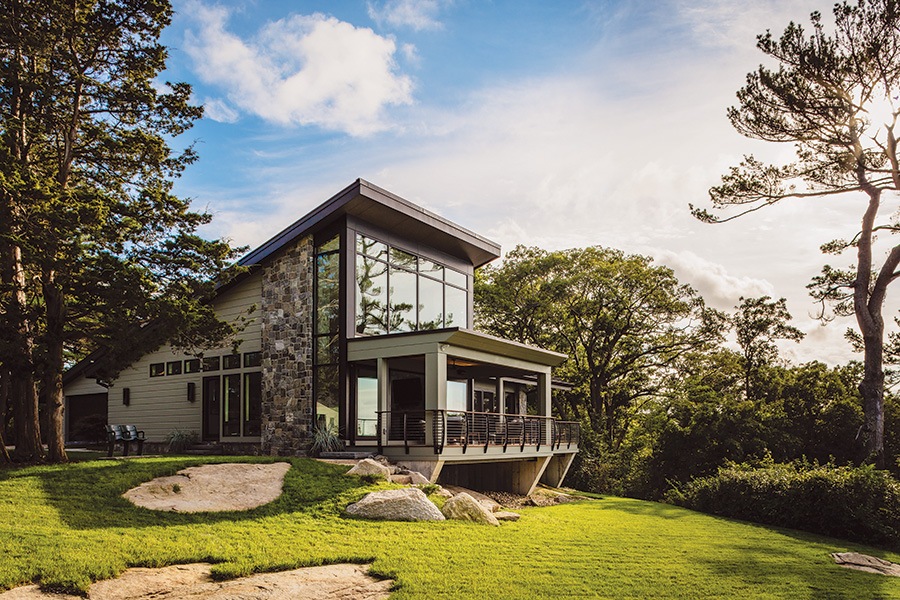 With an emphasis on natural colors and materials, the house—which offers views of Essex Bay—was built as a “response to the landscape,” senior architect Michael Gray says. / Photo by Michael J. Lee

After many years of living in California, Bay State natives Grant and Diana Clark were contemplating retirement (and a move) when a home in Gloucester caught their eye. “It was an absolute disaster,” says Grant, who first spotted the property on Zillow. “Just a ramshackle cottage and a lot of outbuildings.” Still, the grounds, which offered sweeping views of Essex Bay and Crane Beach, were undeniably impressive. “I called Diana’s brother, who lives in town, and said, ‘Could you go over and look at [this place]?’” Grant recalls. “He immediately called me and said, ‘Please fly out. It’s one of the last great pieces of land.’”

For the Clarks, the decision to buy the waterfront property was easy. Renovating the existing buildings, however, proved to be a lost cause. Choosing to demolish the rundown structures and construct new ones instead, the couple turned to design-build firm Carpenter & MacNeille, which devised plans for a quiet, California modern–inspired house and guest cottage that would be “respectful of the land,” Grant says, while maximizing the panoramic vistas. “This particular property is all about the siting,” says senior architect Michael Gray, who conceived the initial design. “So we positioned the house to take advantage of that.” In addition to a house that would seamlessly integrate the landscape, the Clarks—experienced renovators who’ve bought and flipped numerous homes over the years—sought a single-story abode with high ceilings, sloped roofs, and prominent use of materials such as glass, stone, and steel. “We tried to make sure we incorporated everything we’d always wanted, and also have a home that would be our last home,” Diana explains. “We’ve [redone] so many houses that we understand what’s fine—and what’s not fine—in a house.” 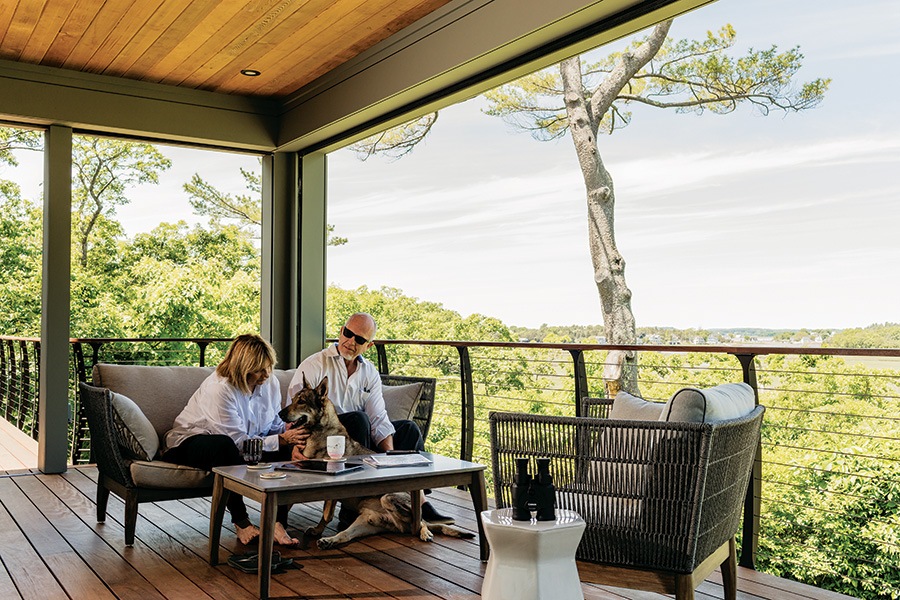 Diana and Grant Clark share a moment on the covered porch with Benny, their Carolina Dog. / Photo by Michael J. Lee 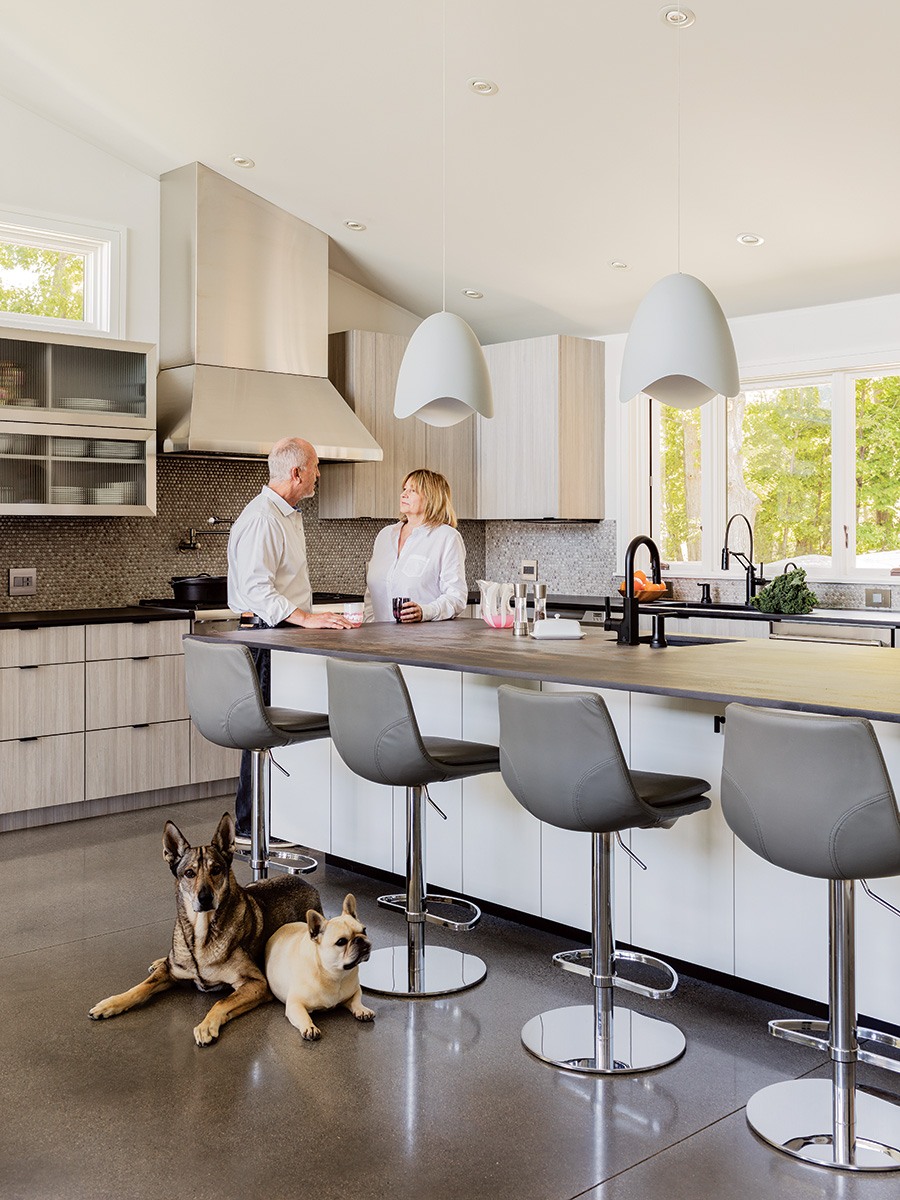 Dekton—a hardy building material made from elements of glass, quartz and porcelain—tops the counters and the island. “I always joke that we wanted to build a house [where] the test was, ‘Can I hit anything with a hammer and not wreck it?'” Grant says. / Photo by Michael J. Lee 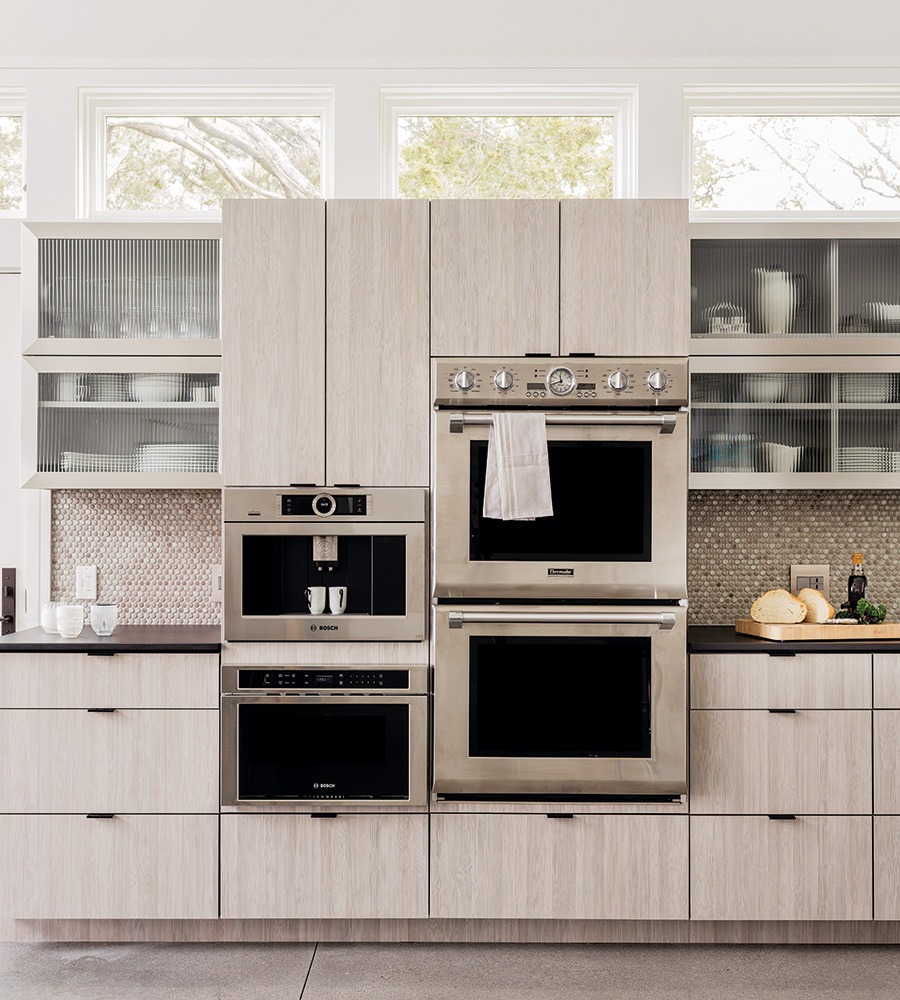 At 2,440 square feet, the new one-bedroom home feels serene and understated in all the right ways. Set back from the street, the house lies beyond a cluster of pine trees, which hide everything except the standing-seam metal roofs. It’s only as you travel down the gravel driveway that the full structure, clad in green-painted bevel siding, appears. “The idea was [that it would] look like it kind of grew out of the ground,” Grant says. Stone pavers leading to the double front doors, accented with textured-bronze handles from Rocky Mountain Hardware, add to the organic vibe. “[The house] stays very nice [and] quiet from the road or from the ocean,” Diana says. “A lot of people don’t even realize that it’s here.”

The pared-down aesthetic continues inside the home, where Diana took the lead on furnishings and finishes. An airy entry hall leads to the combined kitchen, living, and dining area, outfitted with stone piers and concrete flooring. The room serves as the main gathering space for the couple, who love to entertain. “We have three dishwashers,” Diana says of the kitchen, which also includes an oversize island and custom cabinetry made in Carpenter & MacNeille’s woodworking shop. “It’s a big deal.” Of course, the true pièce de résistance is the room’s glass curtain wall, which provides unobstructed views of the water. “That’s not something we typically do,” Gray says of the modern feature, “so sourcing that and getting the engineering right was a challenge.” 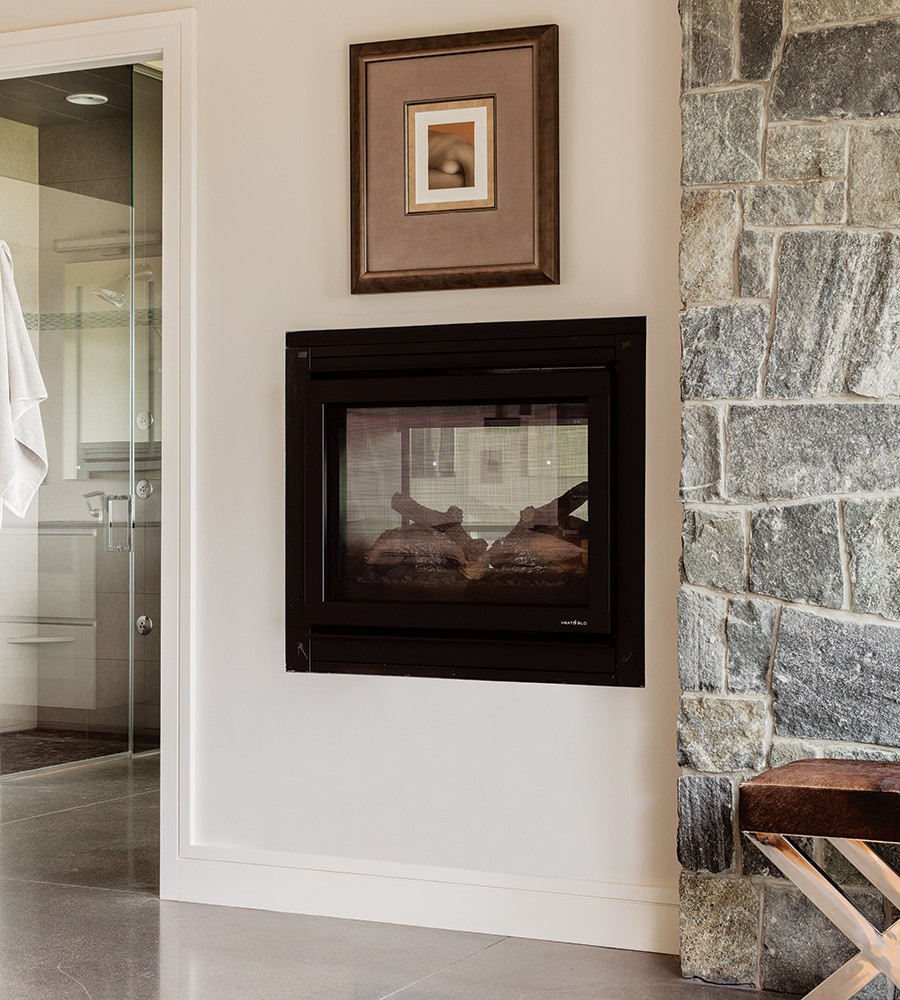 Installed in the wall between the bedroom and the bathroom, a Heat & Glo gas fireplace warms the master suites. / Photo by Michael J. Lee 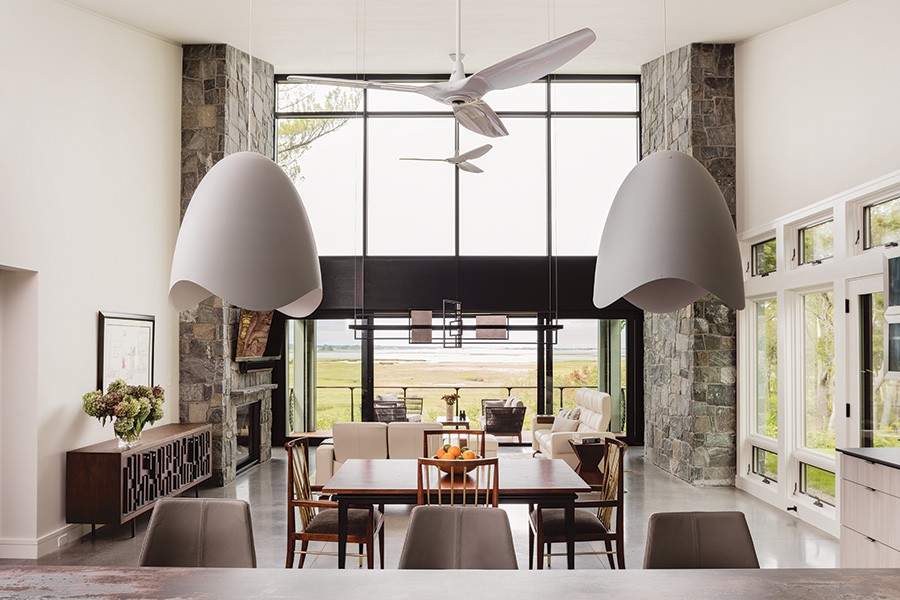 The living area’s sloped ceiling culminates in a glass curtain wall, designed to showcase the view. A reglet built between the ceiling and the side walls, meanwhile, fosters the illusion that the ceiling is floating. “That was a little complicated detail we came up with,” Gray says. “The goal of it was to have the ceiling feel a bit lighter.” / Photo by Michael J. Lee 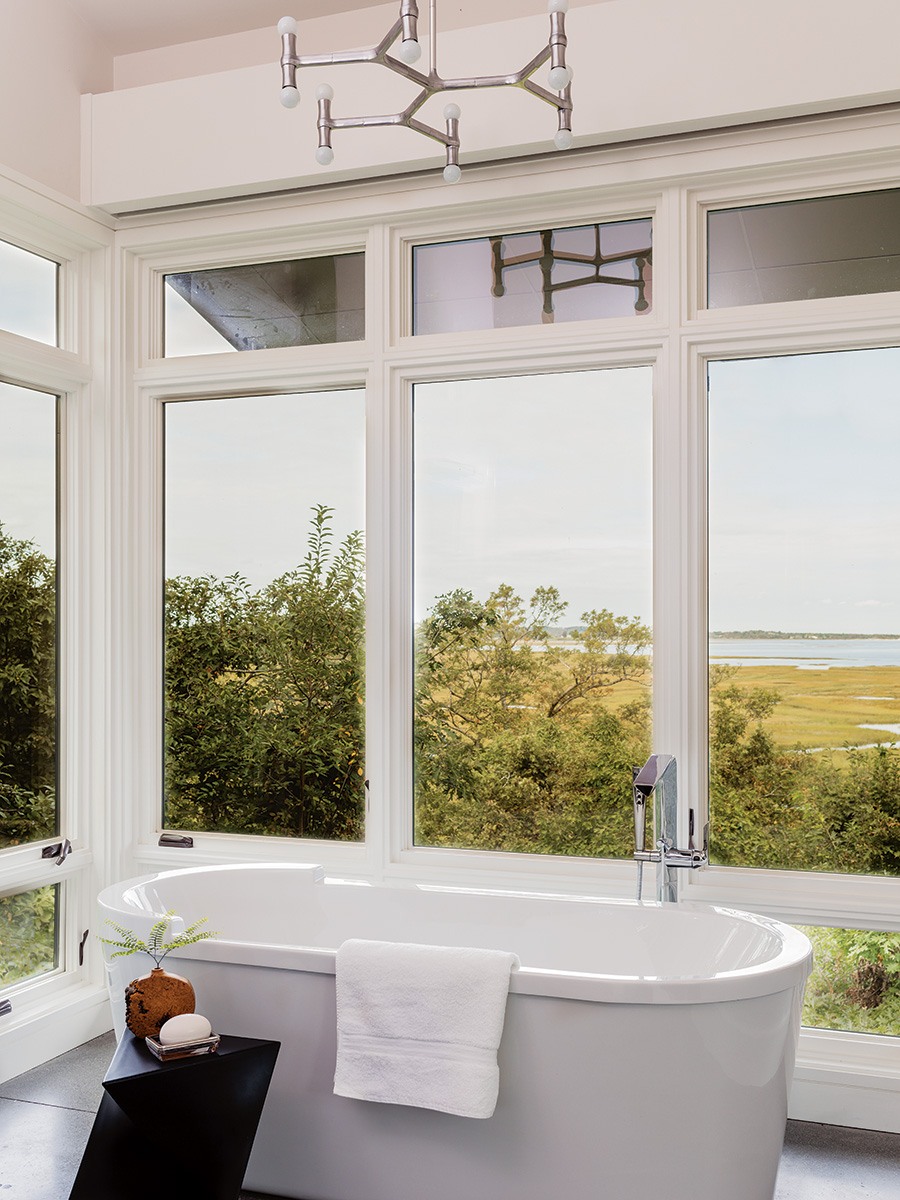 A Duravit soaking tub rests in front of floor-to-ceiling windows in the master bathroom. / Photo by Michael J. Lee

The seascape also takes center stage in the roomy master suite, accessible via a short hallway just off the dining area. Equipped with floor-to-ceiling windows, both the bedroom and the bathroom—which houses a large Duravit soaking tub—are oriented to face the marshes. “It’s hard to get out of bed in the morning; it’s just so nice looking at whatever view it is,” Diana says. “It’s different when you wake up each day.” The bedroom also boasts access to an Ipe deck, bordered by a nautically inspired steel cable railing from Keuka Studios. Connected to a covered porch off the living area, it’s a prime spot to soak up sea breezes on a sunny day. 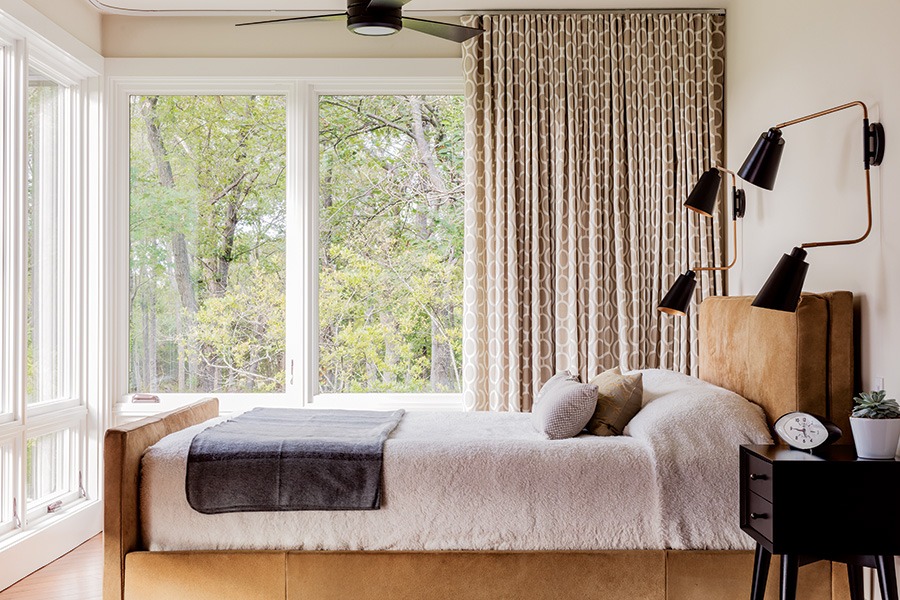 The guest cottage features midcentury-modern décor. “[The house and the cottage] have distinctly different feels, but [they’re not] antagonistic to each other,” Grant says. / Photo by Michael J. Lee 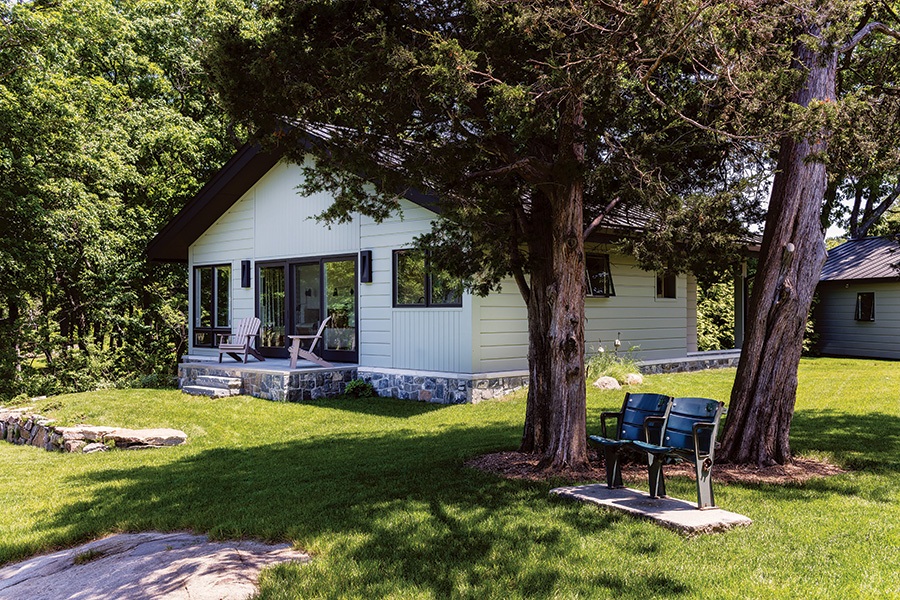 A pair of vintage seats from Fenway Park—a gift from a neighbor—sit outside the cottage. / Photo by Michael J. Lee 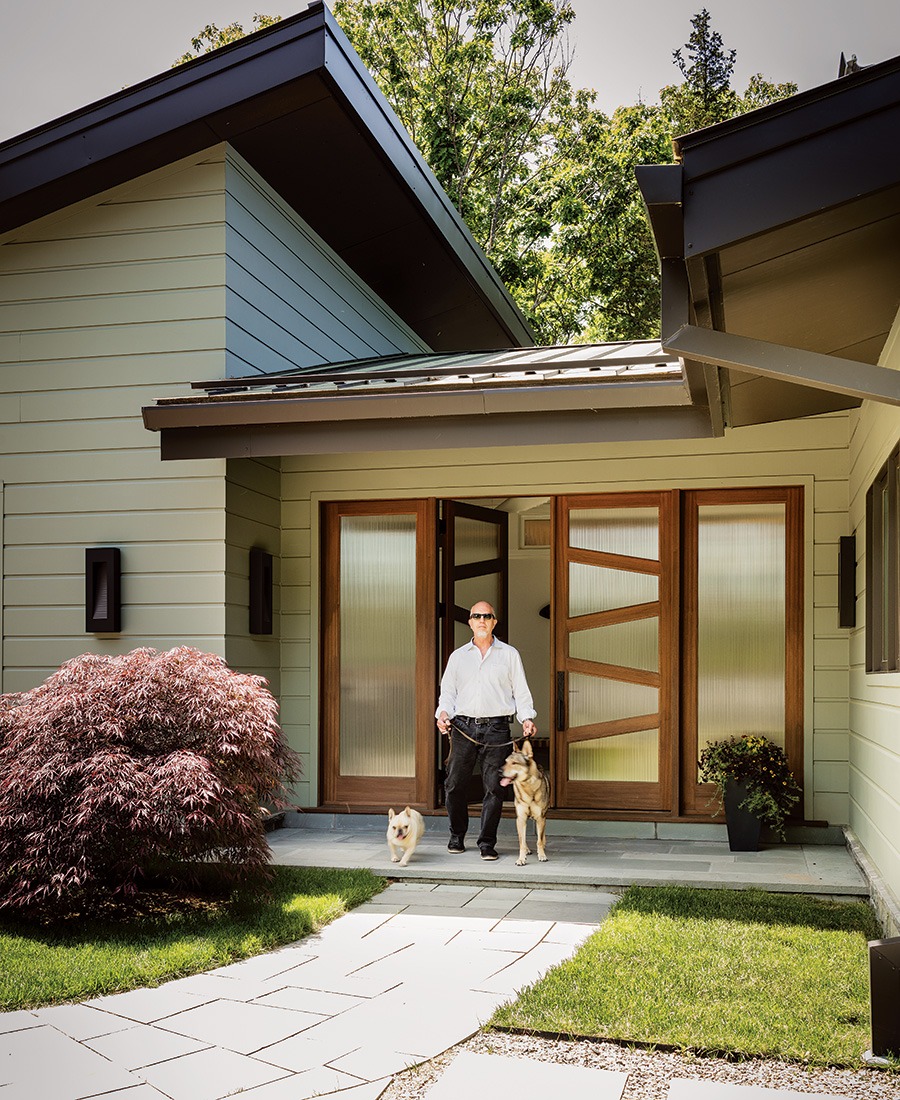 Grant walks with Benny and Zoey, the couple’s French bulldog. “One of the reasons we put concrete [flooring in the house] was so [the dogs] could run and play,” Diana says. “You don’t have to worry about messing up wood floors.” / Photo by Michael J. Lee

Of course, when the weather’s not so cooperative—it is New England, after all—there’s plenty to enjoy inside the house, too. An exercise room behind the entry hall sports an Endless Pool, which Diana uses nearly every day. Second to the swimming machine itself, the space’s most distinctive element is the feature wall—clad in the same “Greenwich Gray” stone that enlivens the piers in the living area. “It was on my must-have list that [the stone be placed] in a particular way,” Diana says. “My family on my mother’s side comes from a long line of masons, so I wanted to make sure that everything was just so.”

It’s this kind of attention to detail and investment in the home that Gray says makes the finished product such a success. “It was a really great collaborative process,” the architect notes. “We always say that the client makes or breaks the project, and in this particular one they really made it. They would question a lot, which we find to be very helpful because it means their heads are in it. They care very much, and that was a great, great thing.” 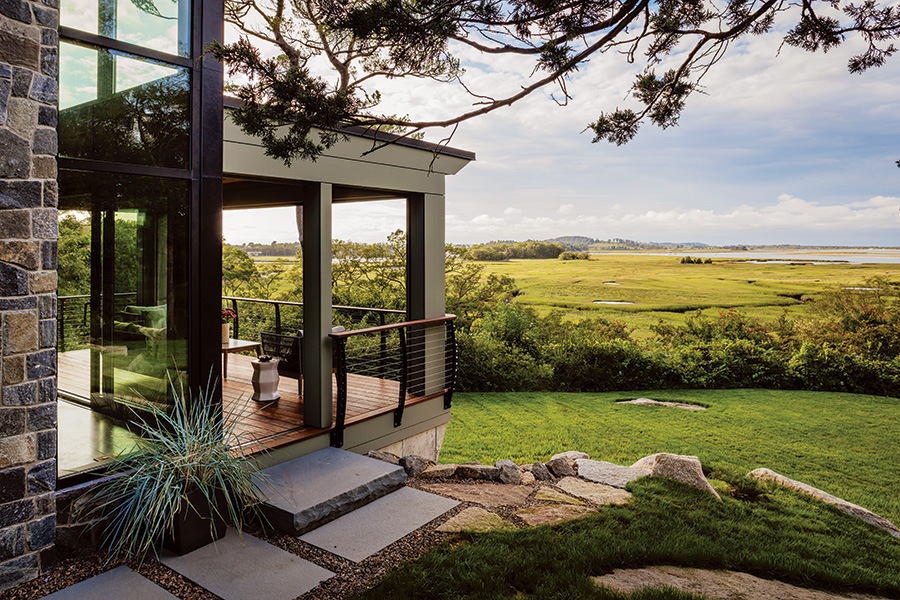 “When the tide rolls in, it comes right to the bottom of the hill,” Grant says of the waterfront property. “It’s truly lovely.” / Photo by Michael J. Lee 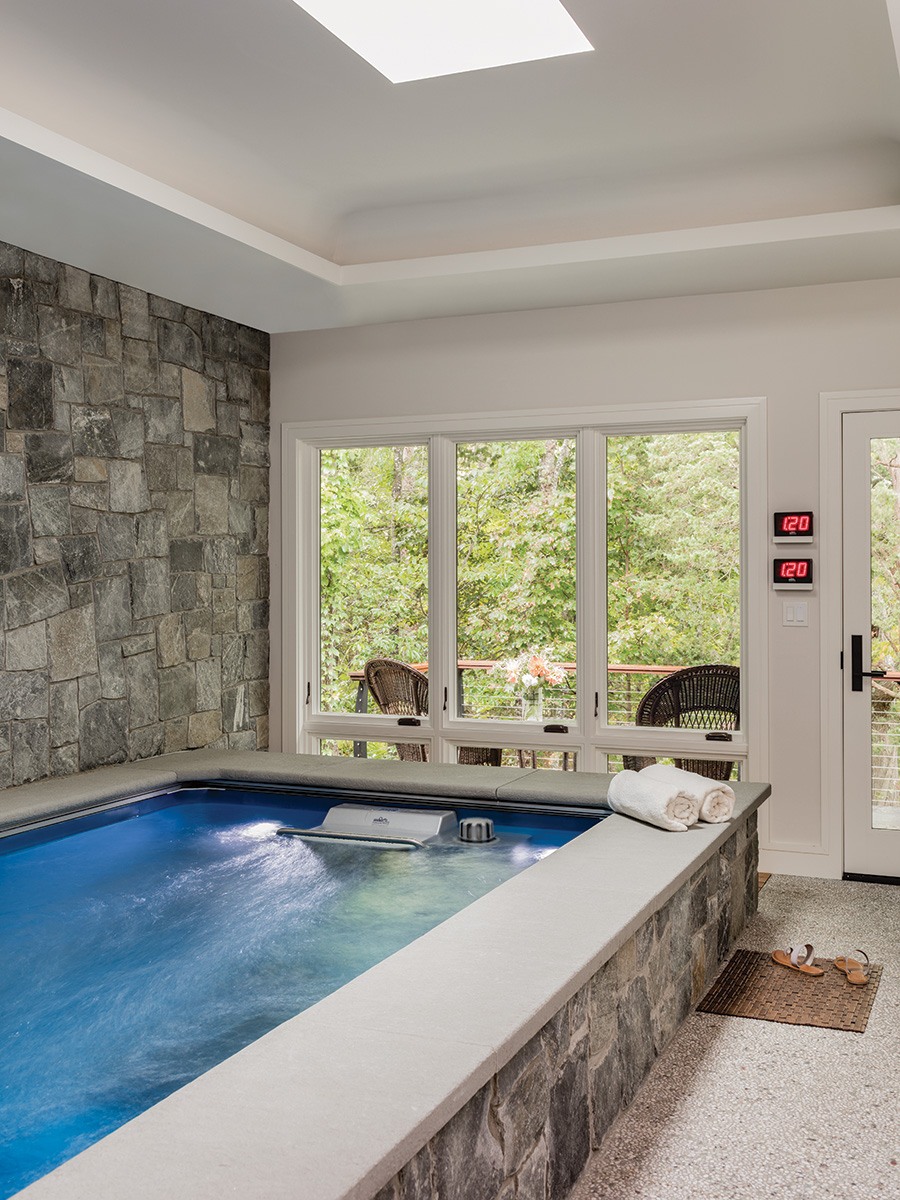 An exercise room located between the main living space and the garage houses an Endless Pool. / Photo by Michael J. Lee 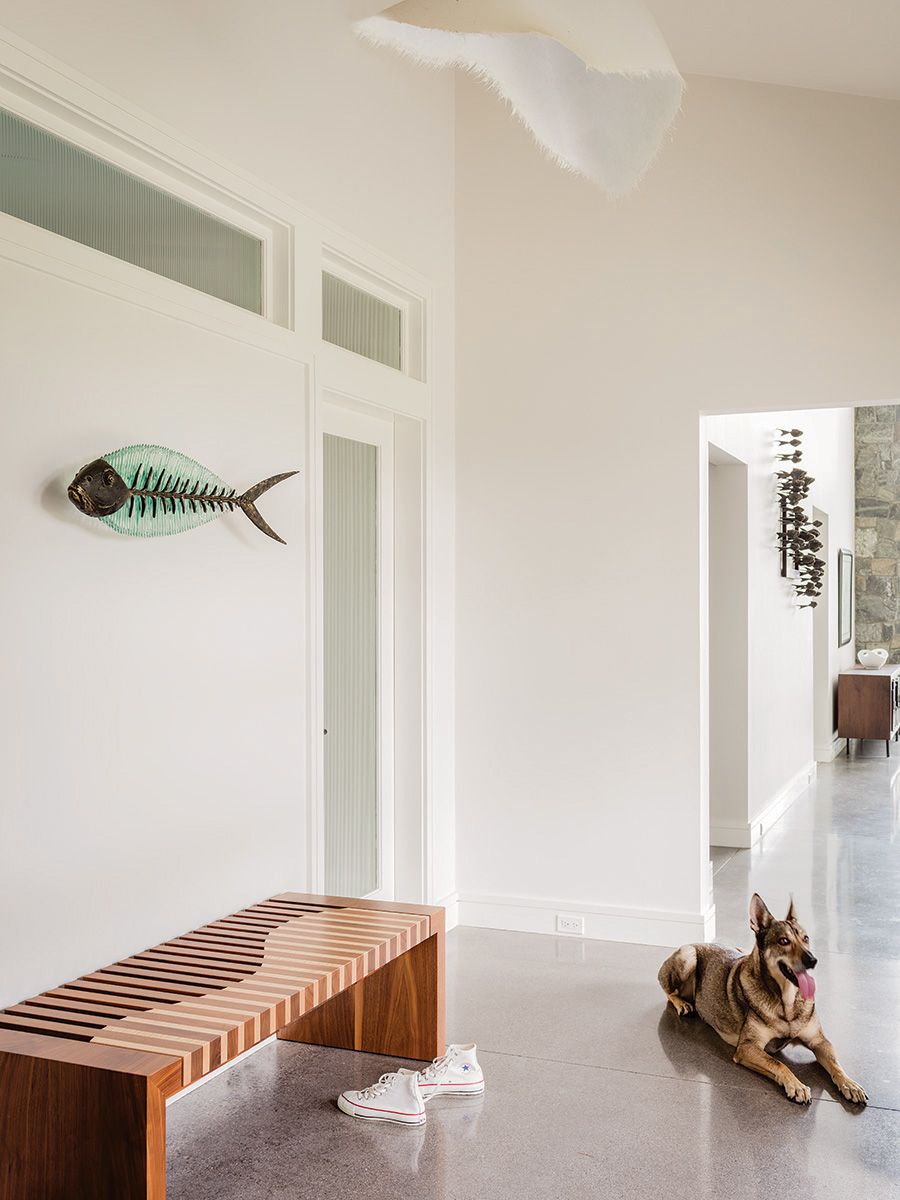 Designed by Diana and crafted by Carpenter & MacNeille, the sculptural bench in the entry hall features maple and walnut—the two types of wood the Clarks opted to use throughout the home. / Photo by Michael J. Lee 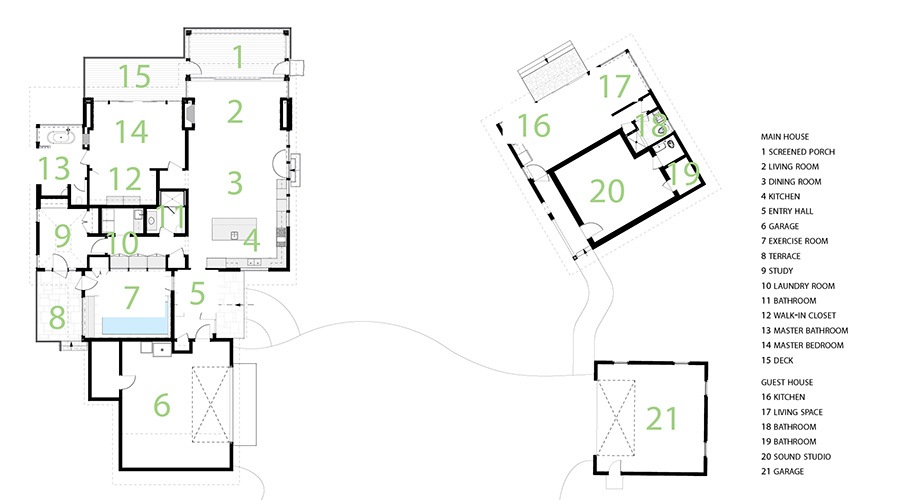