Founder Shawn Laughlin turned a leap of faith into a full-fledged business with A-list clientele. 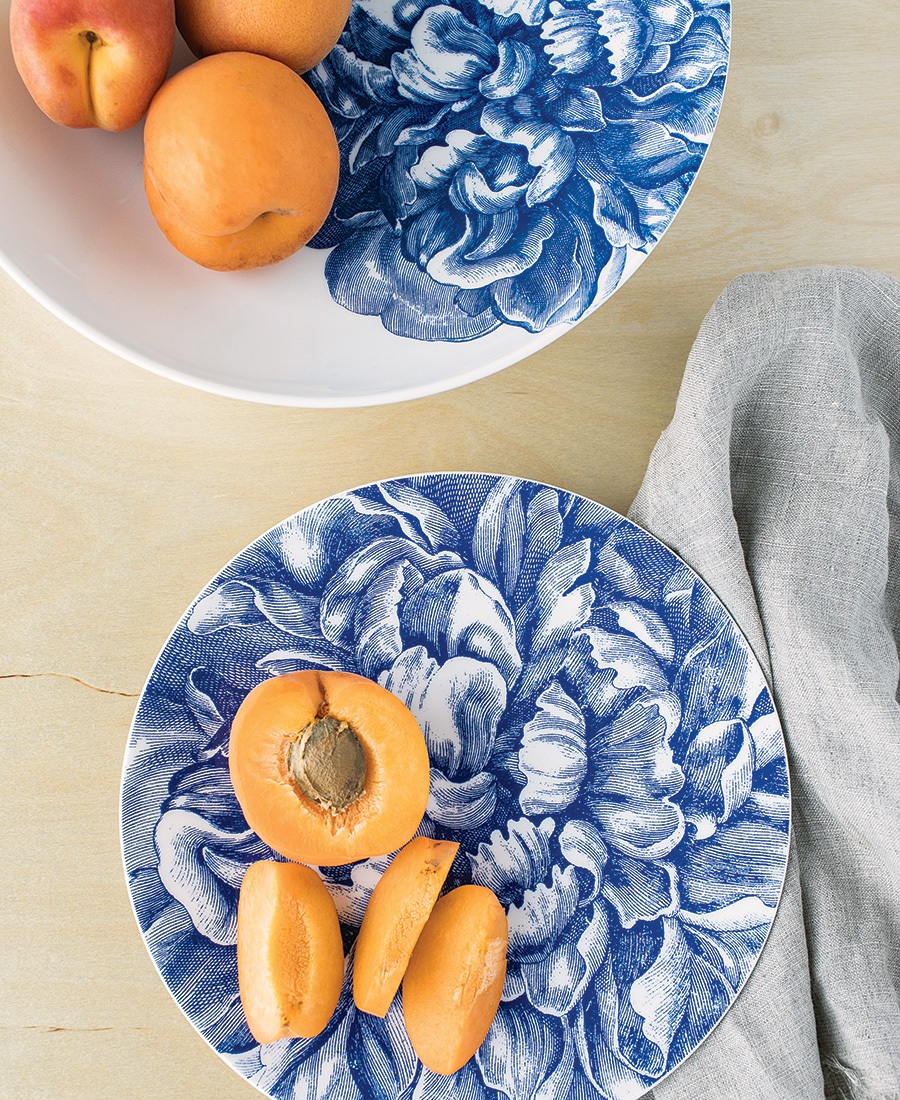 When Shawn Laughlin was growing up in New York City, she often tagged along with her grandmother, an art collector, to the Metropolitan Museum of Art. “I remember when [the Temple of Dendur] opened and she took me to see it,” says Laughlin, founder of the Medfield-based dinnerware brand Caskata. Cut to 2017, and it was Laughlin’s own creations that took center stage at the museum, where—in the very same wing—the likes of Gisele Bündchen and Anna Wintour dined off her “Peony Blue” dishes during the Met Gala. “Unfortunately, neither [my grandmother] nor my mother were around to see it set with my plates,” Laughlin says. “That would have been a moment.”

Although Laughlin has always been a creative person, it took her a while to find the right vehicle for her talents. Before founding Caskata in 2007, she worked as a television-commercial producer, and later she became a stay-at-home mom. Soon, though, she was “going crazy,” she says. So she picked up photography, learned Photoshop in a night class at a technical school, and began showing and selling her work in local coffee shops and other small venues. But Laughlin wanted to start a business, and “[With photography,] I realized I was never going to make any money at all,” she says. Her next venture? Stationery and gift wrap, which she began designing in her Sherborn garage. The endeavor soon took off, and “Suddenly, I got big orders,” she says. Yet she recognized a significant profit still wasn’t in the cards. Around the same time, though, Laughlin acquired what she calls a “plate fetish,” collecting thousands of dishes in her home to use while entertaining family and other local moms. That’s when she noticed a gap in the marketplace: There was high-end china for special occasions and approachable melamine sets for everyday dining, but no dinnerware that could serve both functions. So she decided to design her own—and Caskata was born. 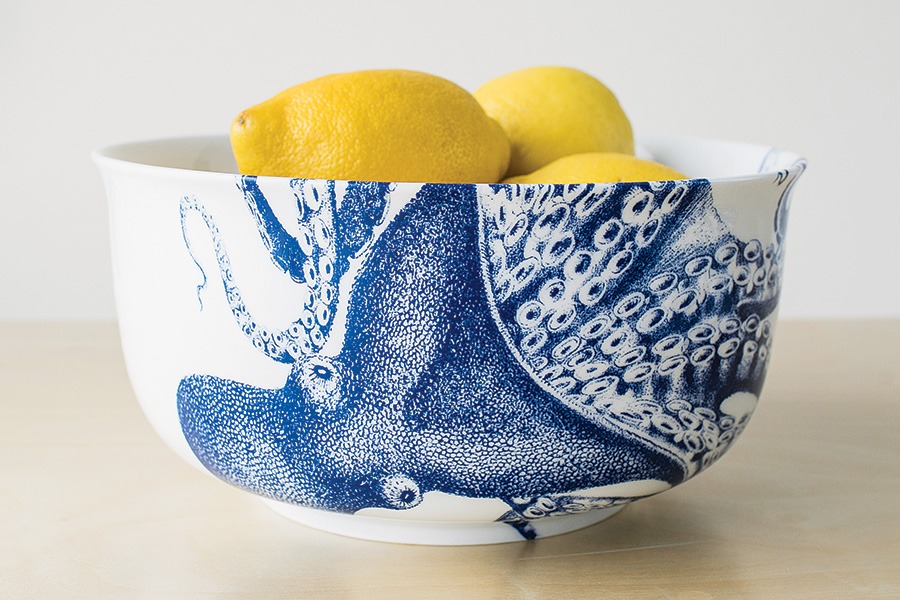 “We want to do something that is timeless, classic, and contemporary all at the same time,” Laughlin says of the company’s design aesthetic. / Photo by Jesika Theos 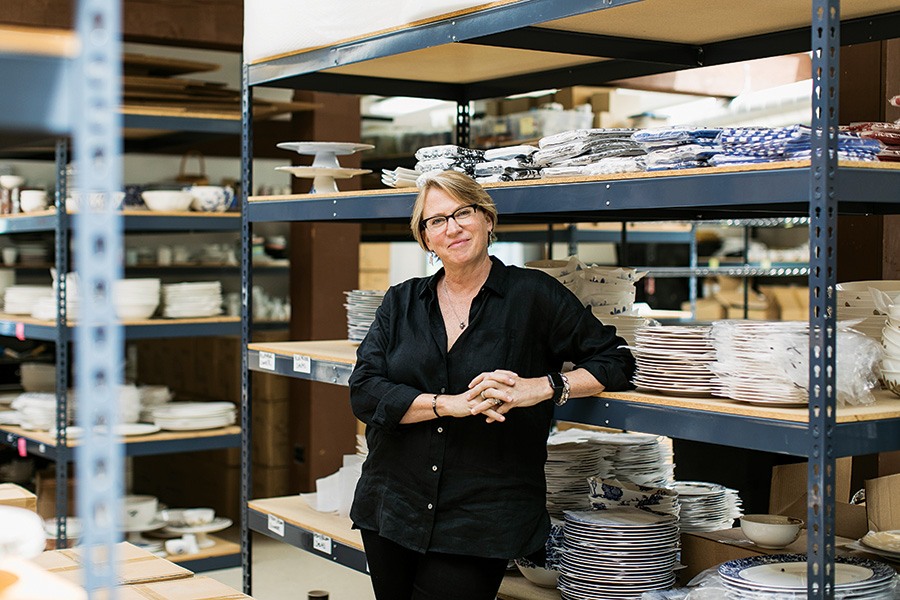 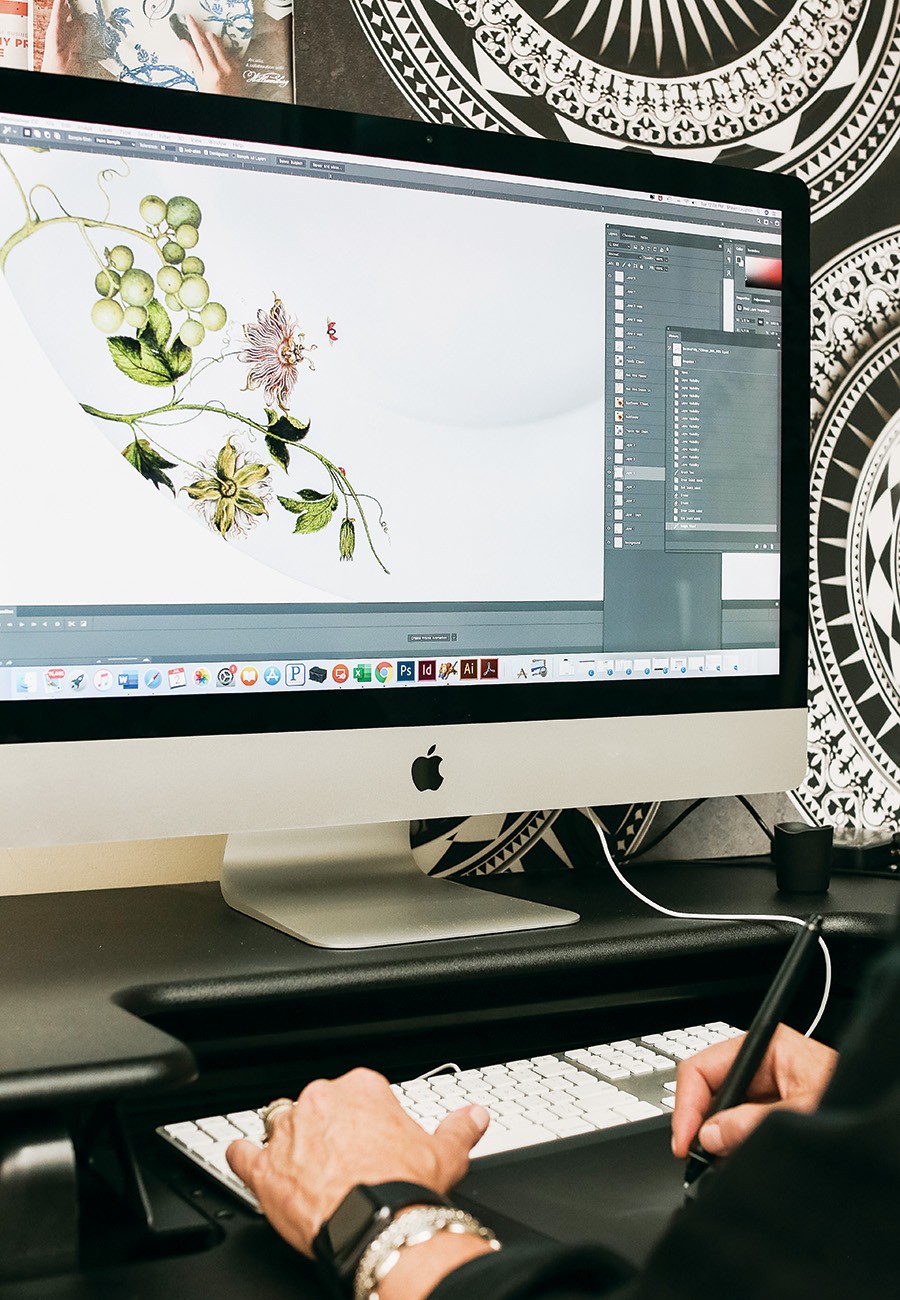 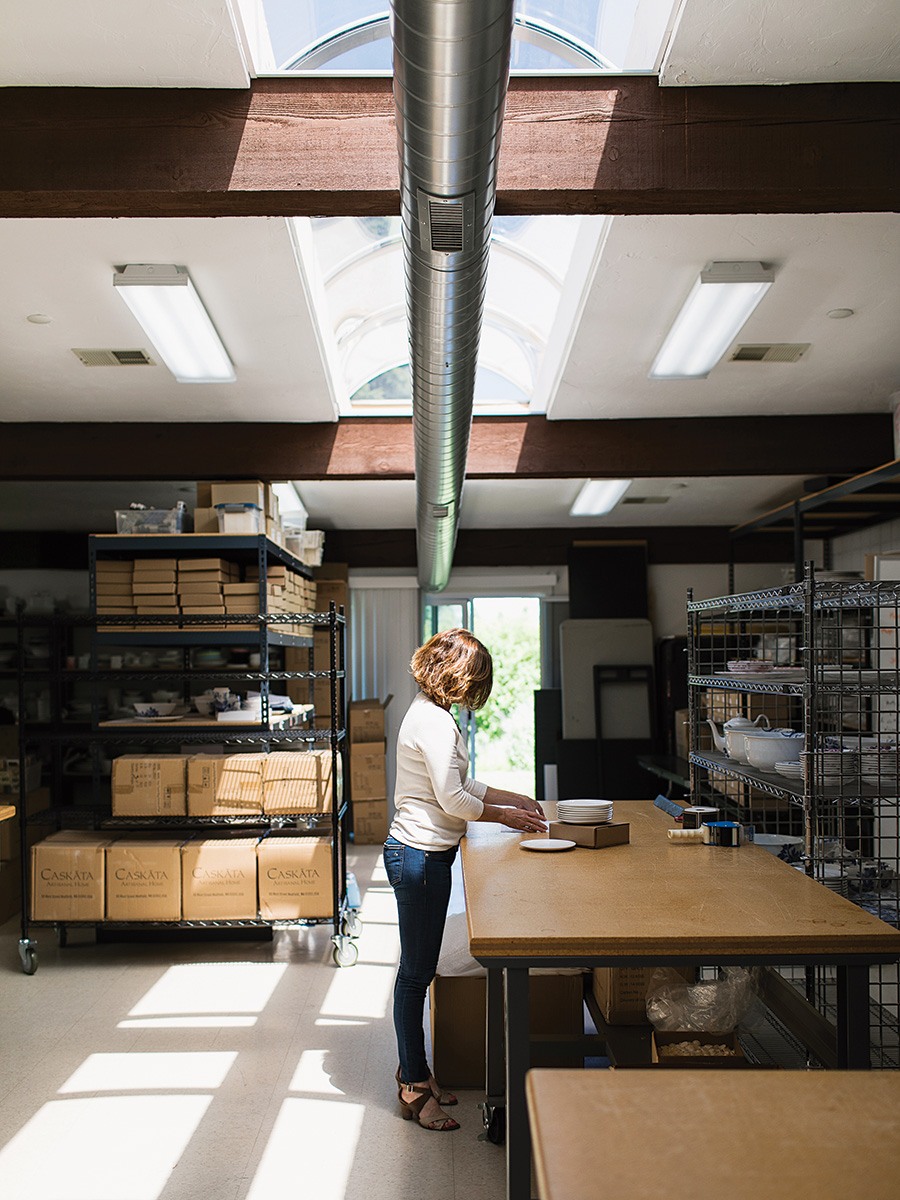 Director of operations Leigh Niskanen manages the inventory in the warehouse, where she ships Caskata orders placed through Anthropologie, Williams Sonoma, Bed Bath & Beyond, and other retailers, as well as the company’s own website. / Photo by Jesika Theos

Today, Laughlin and a small team of female decorators bring to life porcelain and bone china plates, bowls, mugs, and more. “They’re [made] to let customers tell their own story on the table,” she says. Inspired by both nature and fashion, Laughlin’s designs—transferred onto premade pieces using decals printed with a lead-free glaze—range from kaleidoscopic black-and-white patterns to timeless New England lobster motifs. But inspiration comes from elsewhere, too: After a recent trip to Morocco, the designer returned with a phone full of photographs. “I have so many ideas from that trip,” she says. “It’s great to get out and see other things.”

Some people are surprised, Laughlin says, when they hear that a Caskata mug costs $19. Set foot in her Medfield studio and observe the design process for just a few minutes, though, and you’ll see why. After Laughlin designs the patterns using Photoshop and Illustrator, they’re sent to Sias Decal in Milford, Connecticut, where they’re printed on paper coated with water-soluble glue. The next part of the process is at once a delicate dance and a painstaking puzzle: The decorators dip the paper in water to remove the decal, then carefully wrap the fragile sheet around the piece. For all of Caskata’s designs, the last step before the kiln is the most important. The artisan must rub out any air bubbles trapped underneath the film because, as Laughlin explains, “If we fail to do that, then [the piece] will explode.” Once the wares reach at least 1,456 degrees in the kiln, the glaze fuses with the piece and vitrifies as it cools. 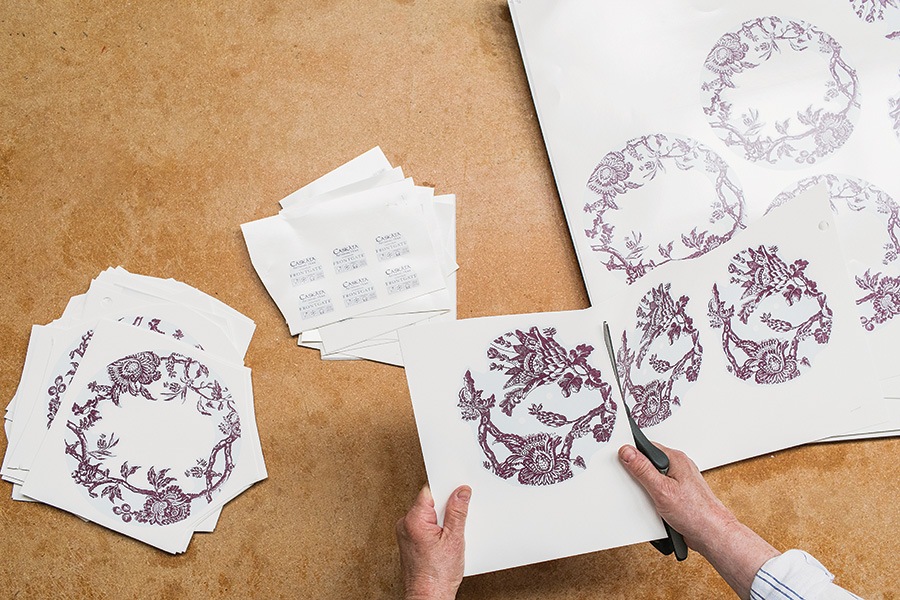 A decorater cuts out custom decals made for Frontgate. / Photo by Jesika Theos 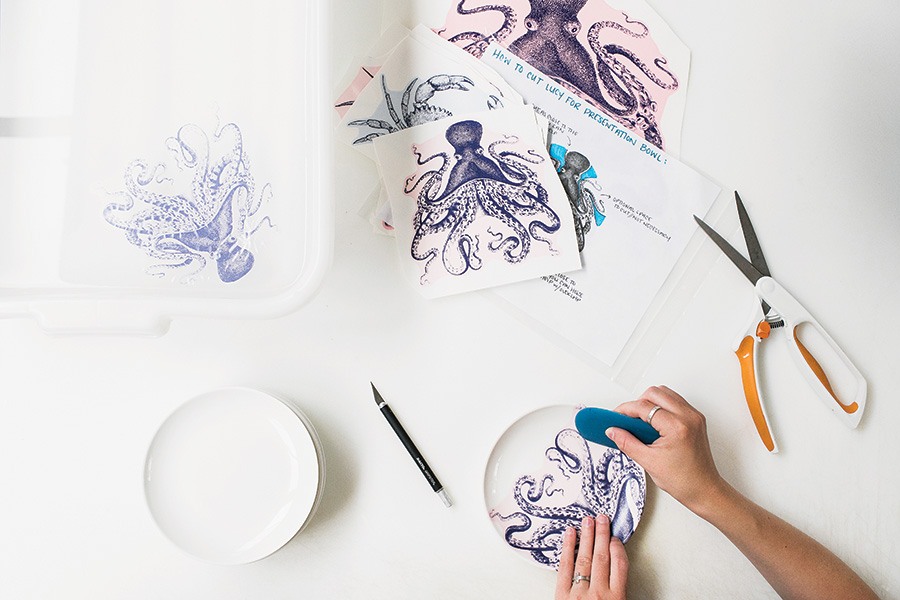 After applying a soaked decal to a dish, a decorator uses a squeegee to remove excess water and air bubbles before the piece goes into the kiln. / Photo by Jesika Theos 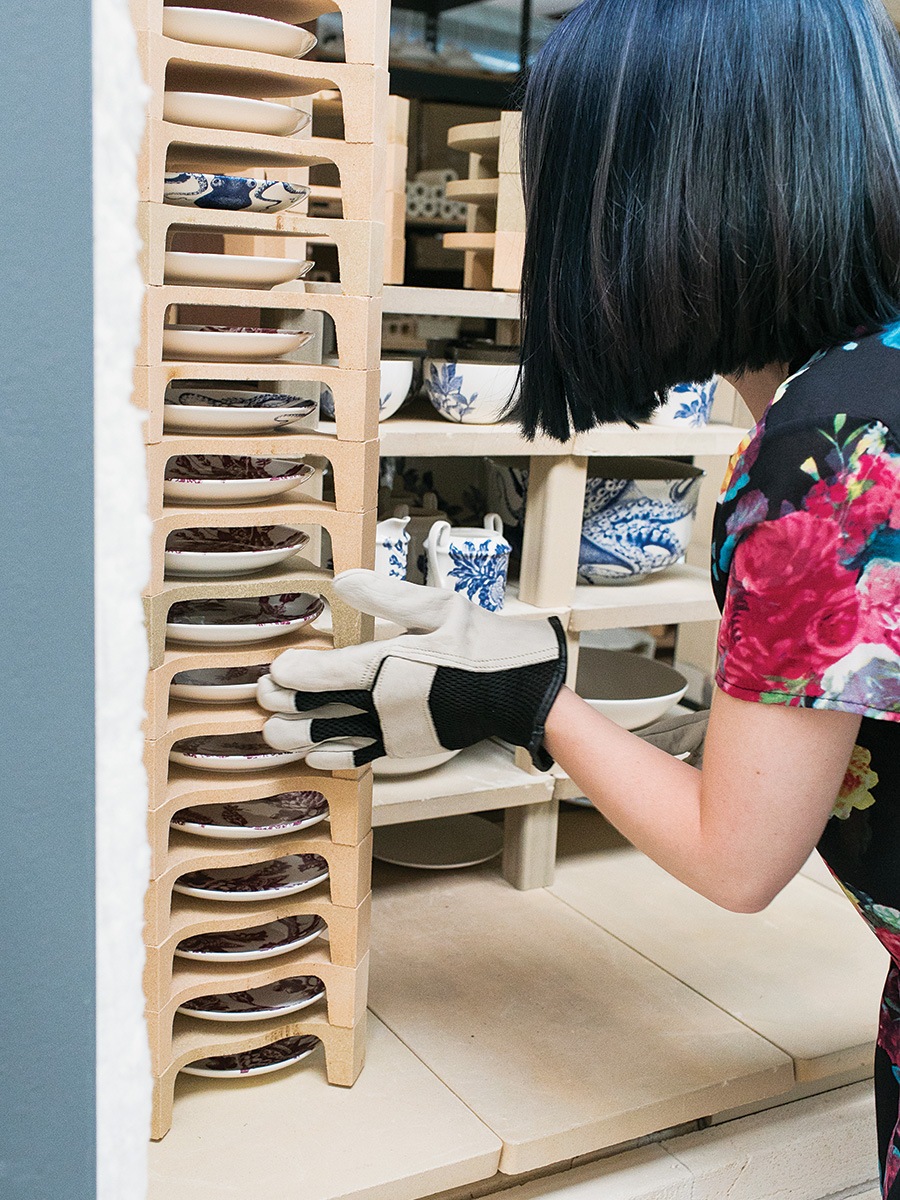 Plates are stacked strategically in the kiln to account for the varying glazes, which fire at different temperatures. / Photo by Jesika Theos 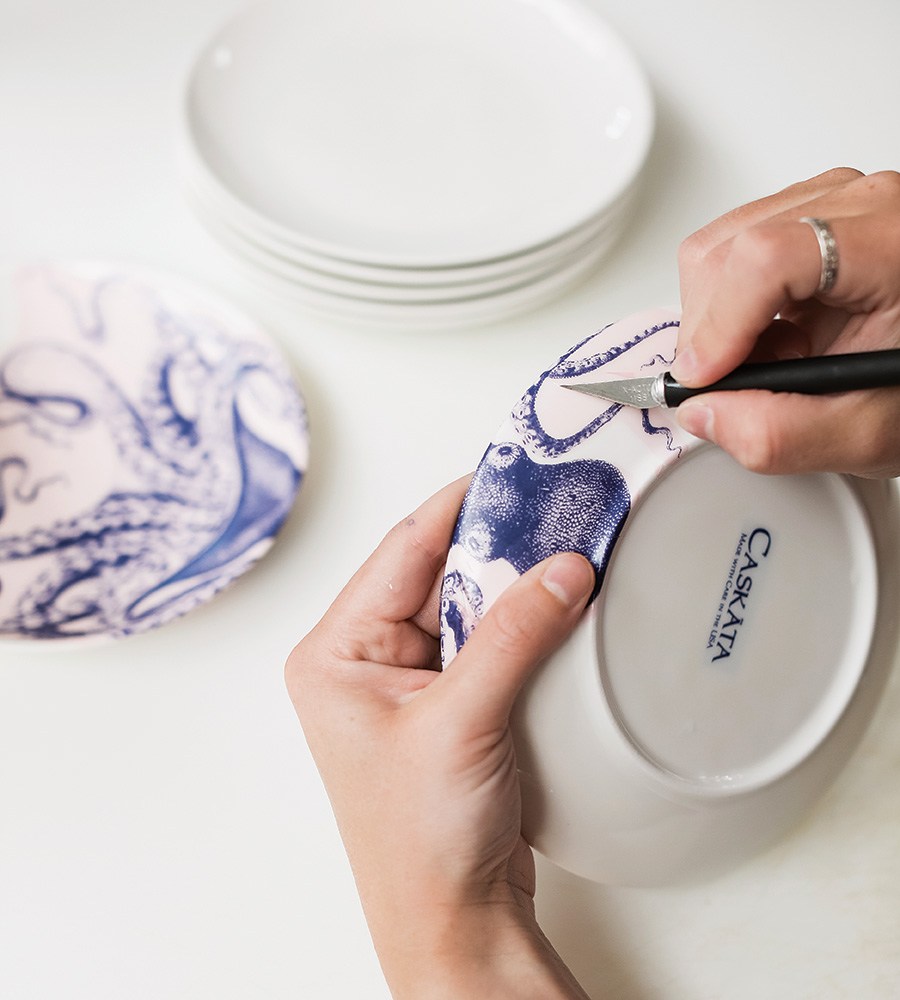 “Blue Lucy,” an octopus graphic, is the most complicated design to work with. / Photo by Jesika Theos

These days, bespoke orders from customers such as Frontgate, Lux Bond & Green, and, more recently, the Encore casino in Everett account for more than a quarter of their work. The rest of the pieces sell to retailers like Williams Sonoma and Perigold, and, increasingly, to online customers who have become fans of the brand’s classic-meets-contemporary aesthetic. As the company begins to shift its focus from B2B to consumer sales, Laughlin says she sees more opportunity for Caskata than ever before. “I hope to capitalize on the growth that we have and broaden our reach into glassware, flatware, and textiles [so we can] have a full table,” she says. “That’d be really cool.” 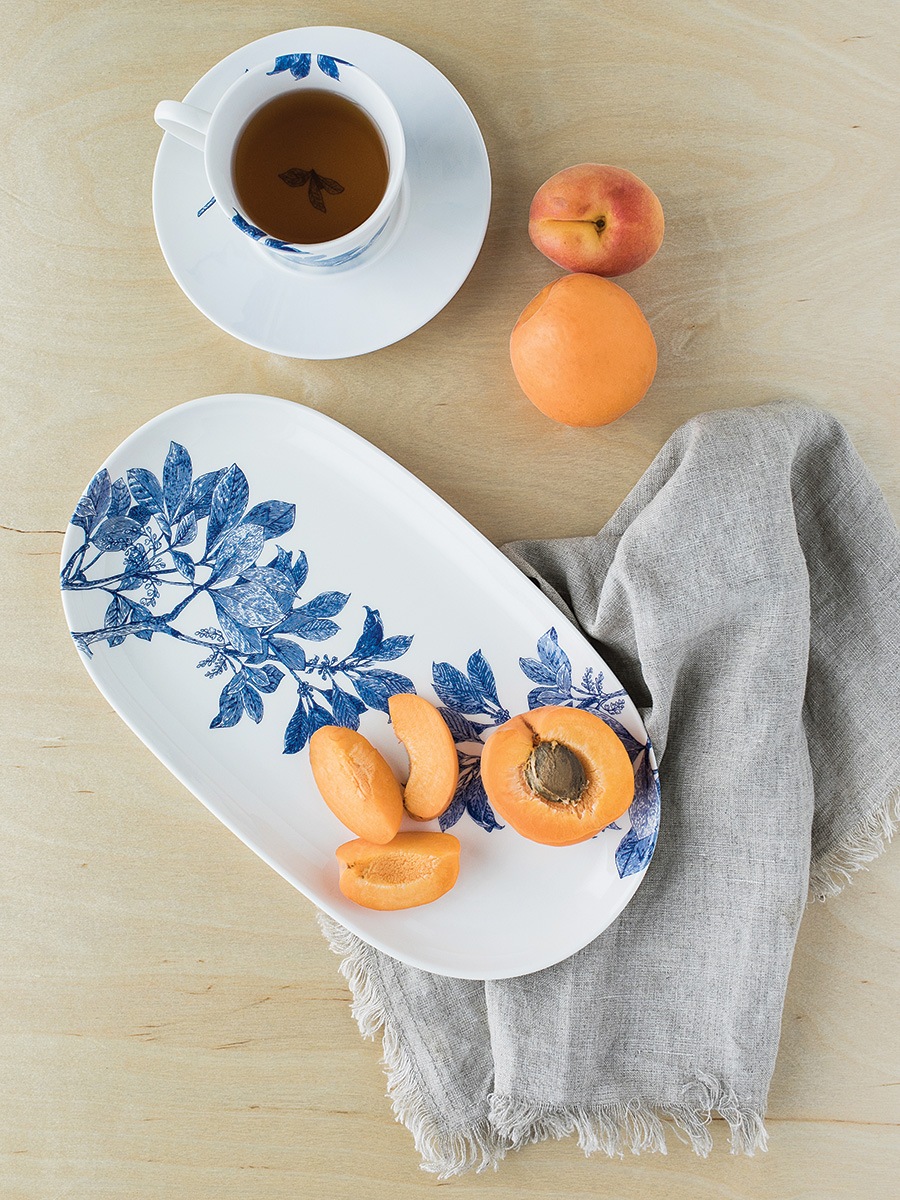 “It’s about setting a stage for beautiful food, for entertaining,” Laughlin says of her brand. / Photo by Jesika Theos 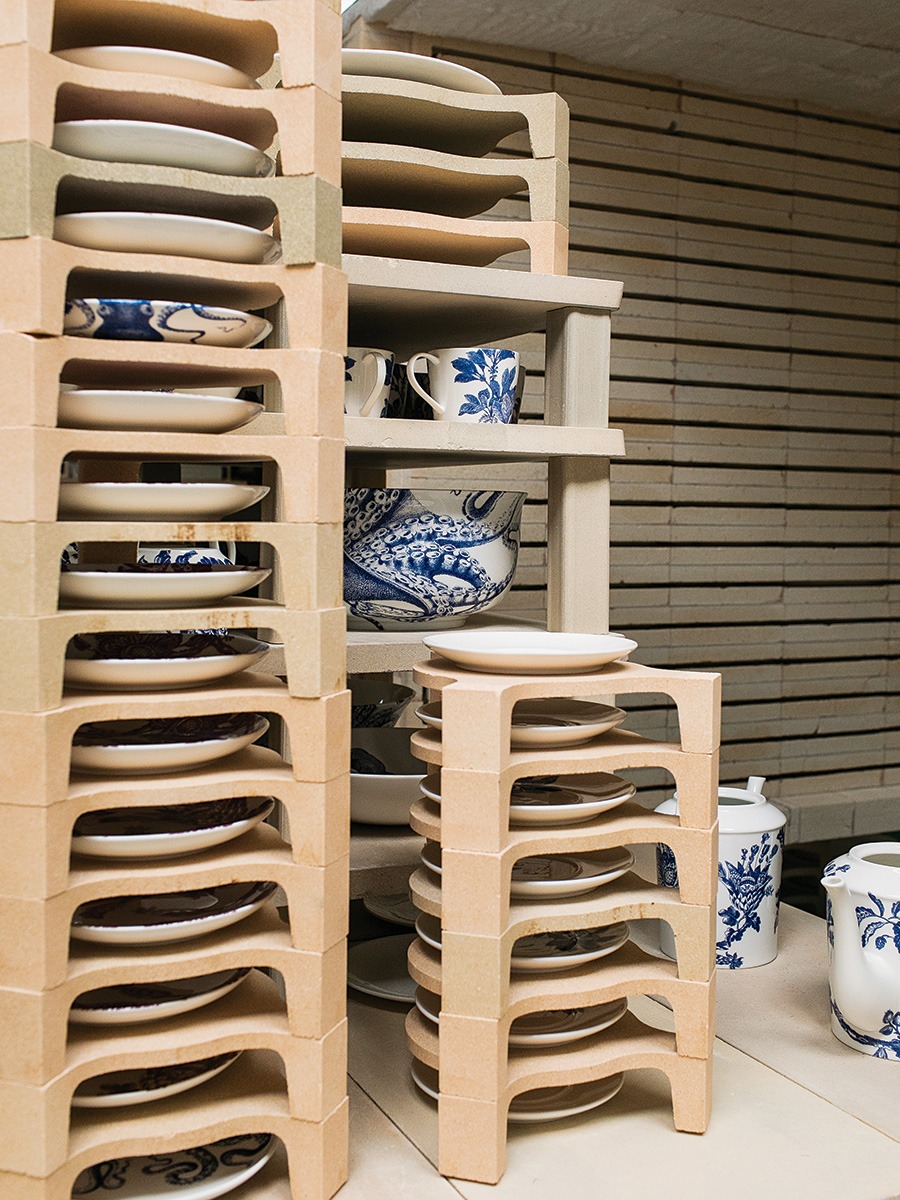