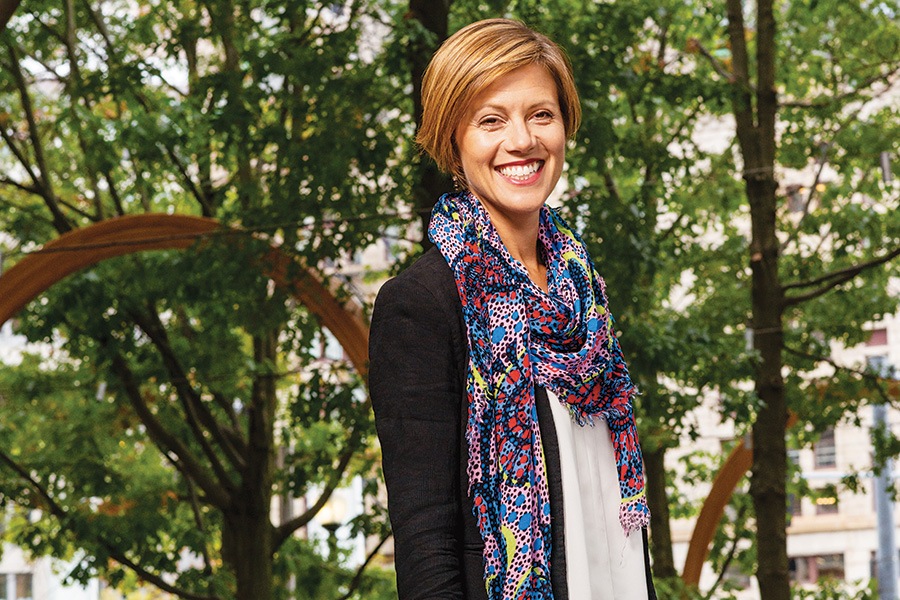 Before taking the helm at Now + There, Kate Gilbert picked up an MFA at the School of the Museum of Fine Arts. / Photo by Toan Trinh / Hair and makeup by Laura Dillon/Team

A little over two decades ago, Kate Gilbert was a new Connecticut College grad with a degree in studio art. These days, she’s helping other artists get their work out there—and on a grand scale. After working at the Boston Society of Architects and the Greenway Conservancy, Gilbert established Now + There in 2015. The nonprofit, a rebrand of MassArt’s former UrbanArts Institute, curates and produces temporary public art projects around the city (think: sculptor Nick Cave’s inflatable creation in Uphams Corner or painter Rob “Problak” Gibbs’s Tremont Street mural). Everything the organization does comes down to a central mission: “to acculturate Boston to the power of contemporary public art,” Gilbert says. And so far, the work is paying off. “We’re getting so many people coming up to stand by our side and say, ‘Yes, we want to build a public-art city,’” she adds. “‘We want art that reflects who we are today.’” 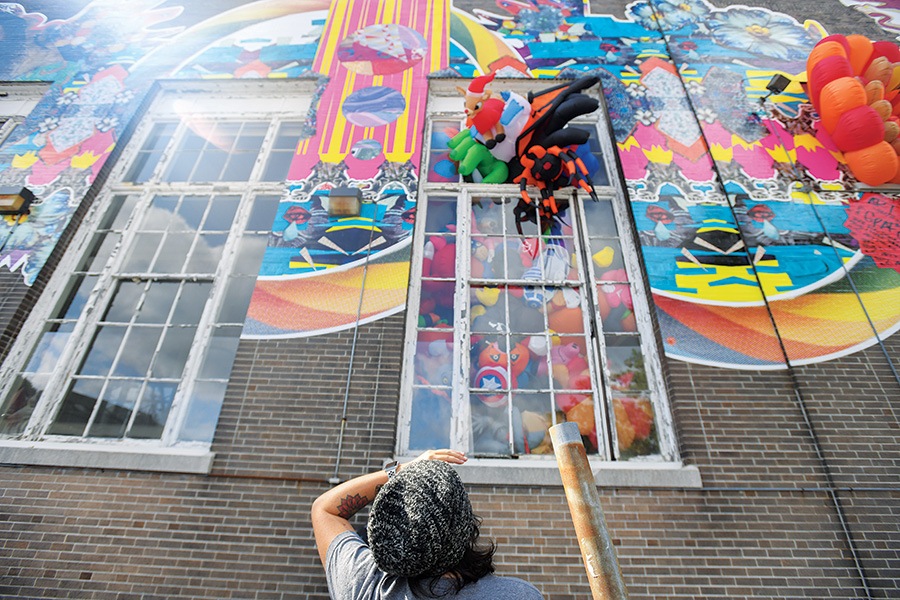 I’m not a master planner in terms of what infrastructure a city needs, but I do know that it’s cold here. It’s physically cold, but there’s also not a whole lot of color—literally. Vibrant color is not part of our city’s makeup. I also think we need more opportunities to gather and come together, and to do so spontaneously. It’s a really powerful thing to come together in a space with different bodies, genders, races, ethnicities, and political views. That is still lacking in Boston, and I think that’s something art can do—bring people together, challenge our biases, and start conversations. I don’t think art is going to solve it all, but at least it helps us let down our guard.

What’s the process for bringing one of these works to life?

First, we seek out artists who we believe have something strong to say, which may be aligned with social issues that reflect Boston and often [the nation] as well. We find the artist, bring them to Boston if they’re not from here, and then I take them around on a bike or on foot and show them different spaces. They generally respond to a space because of its physical assets or its proximity to something else that is integral to their artwork. An example is [Detroit artist] Ann Lewis, who wanted to work with incarcerated women. We found a halfway house in the South End, [the McGrath House], and the mural, [See Her], that resulted from Lewis’s [discussions] with the women that live there was within walking distance of it. She wanted the work to inspire them. So we find a space, we find partners, and then comes the hard part: estimating, budgeting, and making friends with the [owners of the] space. We’ve worked with the Parks Department, the MBTA, the Boston Public Library, Boston Properties, a private property owner—and there are different requirements for each one of them. Our mantra is to say “yes” to the artist and to the partners, and then figure out how to make it happen. We have a phrase that everything is “figure-out-able.” That’s the kind of attitude that we as citizens need to take if we want to create meaningful change, whether that’s in our visual culture, our democracy, or our personal relationships. It’s about celebrating what’s possible. 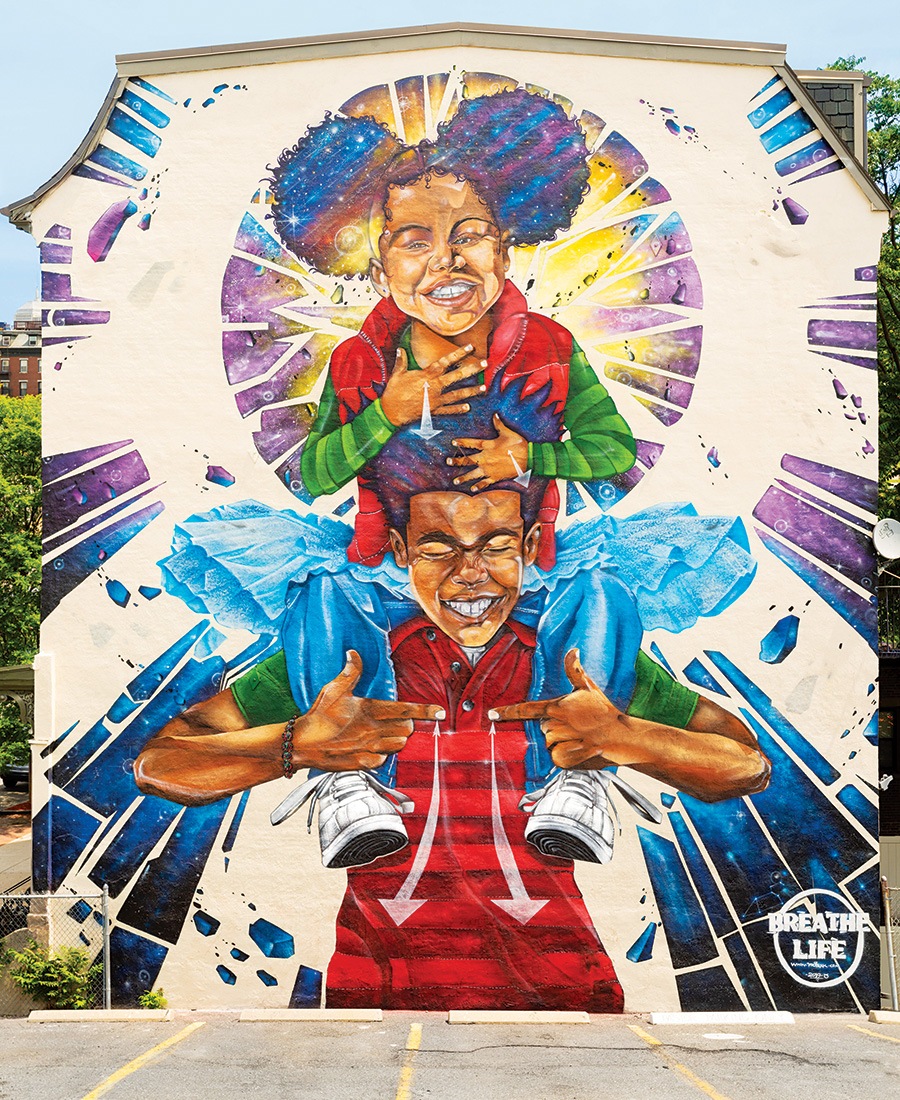 Now + There’s website explains  that the organization doesn’t shy away from controversy. Why is that important?

I find that provocative artwork is the most powerful. That’s one reason why [we don’t do] permanent art: If it’s going to be around for 100 years, it just gets watered down because you have to appease everyone. But not everyone’s going to like [what we do]. For instance, when we had See Her, the image was of a convicted felon, and there were some people at the church across the street who said, “Why are we celebrating someone’s wrongdoings?” And that’s okay, because it starts a conversation about forgiveness. People can not like the subject matter, the imagery, or the way that it’s crafted, but I think that’s good because it starts a dialogue and it motivates people to take action. I think consensus-building is important, as is putting in a little bit of sand or grit in the machine to say, “Why are we doing it in this way?” I think the beauty and the power of art is asking, “What if?” 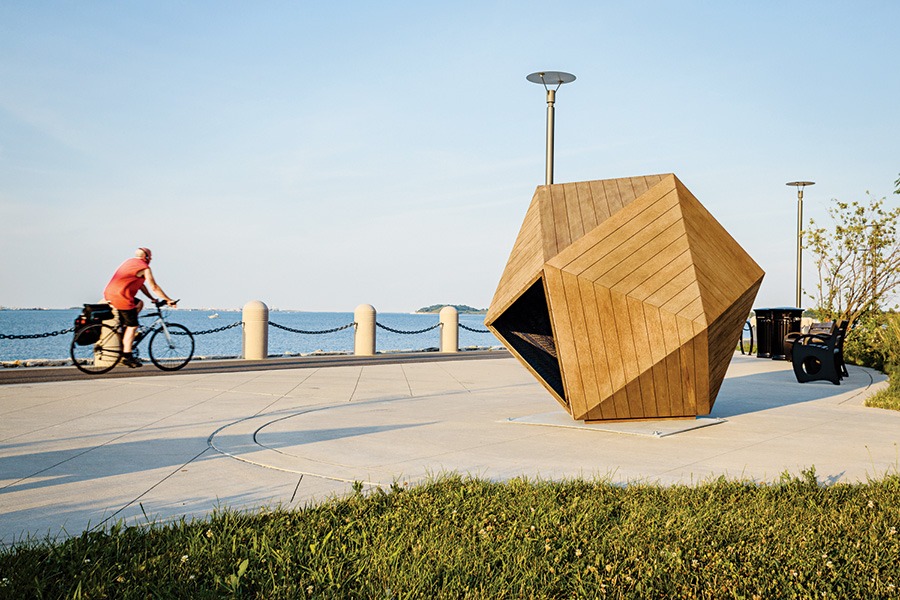 Can you talk about Now + There’s accelerator program?

I’m so excited about that. We created it two years ago, and we get six artists a year to put through a really fast-paced, six-month program. It’s called an accelerator for a reason. Sometimes it’s about brushing up skills, and other times [the focus is on learning about] taxes, finances, how to do permits, and best practices for marketing and social media—things that artists don’t necessarily know or get trained on in school. We give them all the nuts and bolts. We also support the artists with curators and curatorial visits to help them develop an idea. At the end of the six months, their idea has been fully vetted and budgeted and we give them $25,000 to go make it happen.

It’s so hard to break into the public-art world, so we try to take away as many barriers to entry as possible. The goal is to support artists staying in Boston so they don’t have to go to another city where it might be a little easier to do public art. It creates a feeder system so that in two to five years, hopefully, they’re ready to do a bigger, more ambitious project with us or with any of the other local developers or organizations that want public art. I do think Boston is hungry for it; we just don’t have enough pathways into making it. 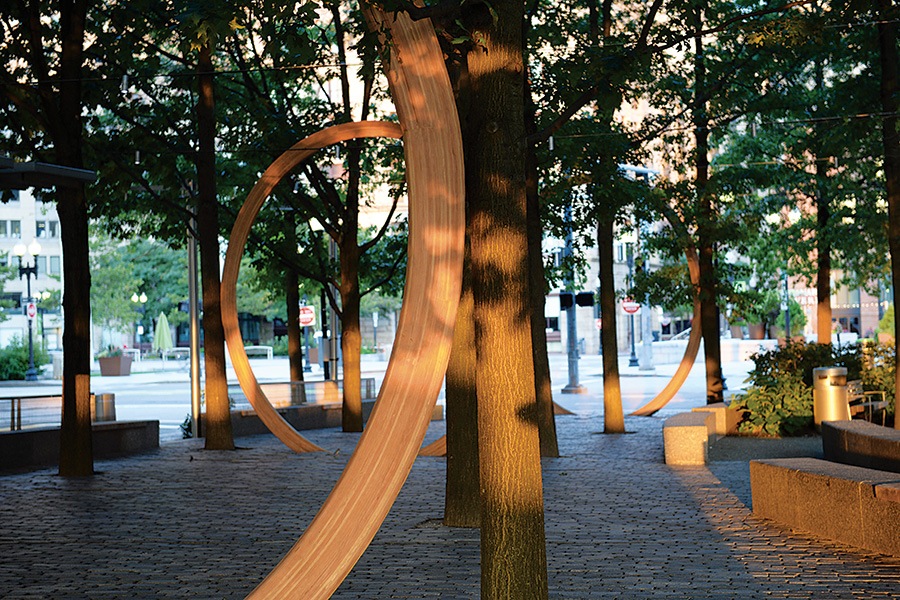 [Last year] was really about [presenting] joyful, positive imagery. [For] 2020, we’re looking at this idea of shared power: Who are the leaders that we are ignoring? How are we thinking of memory, and who gets written into the history books and who doesn’t? And through communal experiences we’ll be really challenging our assumptions of who holds power, who doesn’t, and who should be. It’s very timely with an election season coming up.

Although Now + There is still young, we’re established now and picking up speed and gaining new partners. This goal of building a public-art city seems more and more possible as more people say, “We want art that engages, that pushes our buttons a little bit, that beautifies, and suggests what’s possible.”