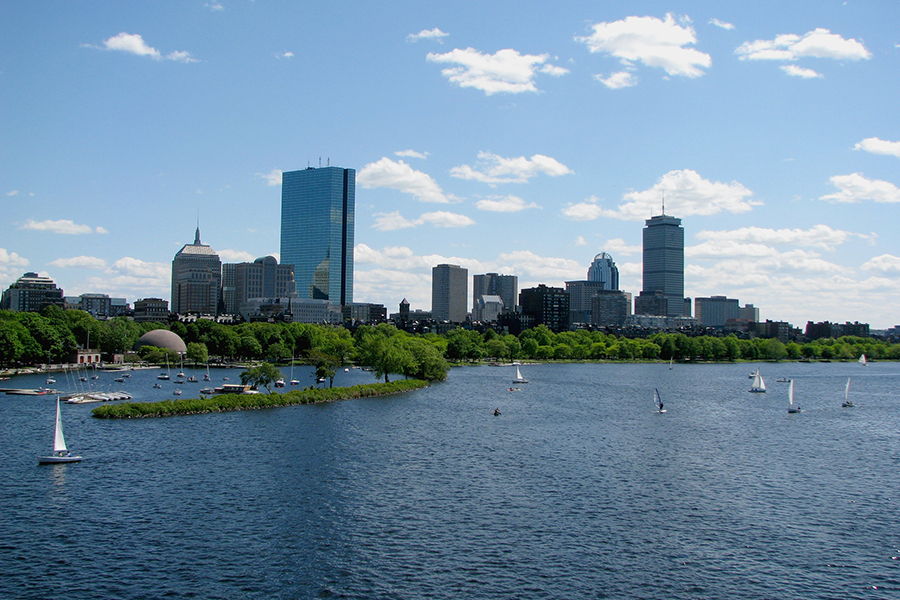 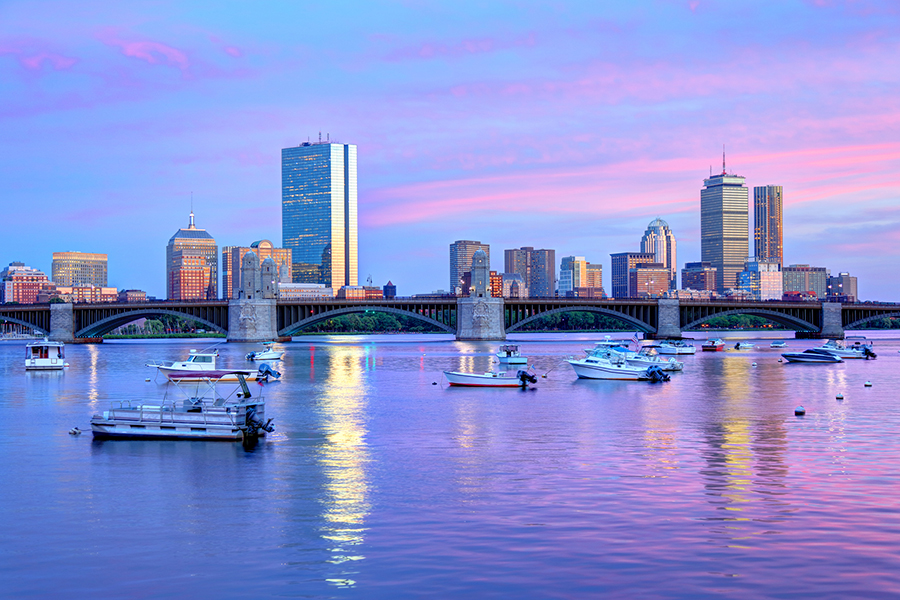 Tourists venture to Boston, in part, to travel back in time. They want to walk along the Freedom Trail, trace the steps of the Founding Fathers, and be led around by modern-day civilians dressed in Colonial garb. They want to take a much-delayed ride on the oldest continuously running subway system in the U.S., and visit the yard of its oldest university. They want, above all, to end the day with a beer at Cheers.

If you’re only in town for the weekend, it’s not hard to see how the city could feel like it’s stuck in time. But for those of us living here every day, we know that couldn’t be less true. We’ve been priced out of our apartments, watched the housing prices go nowhere but up, and bemoaned the addition of yet another luxury condo to the market. We’ve witnessed shopping plazas spring from parking lots, neighborhoods gentrify beyond recognition, and skyscrapers break ground. We’ve schlepped through the snow, ducked under scaffolding, and hurried across the wind tunnel of the Mass. Ave. bridge only to begrudgingly stop and stare at that ever-changing view. And we’ve watched our streets and skylines shift all the while. With the end of the decade just around the bend, from the much-anticipated to the infamous, let’s take a walk through some of the memorable ways our city has developed since 2010. 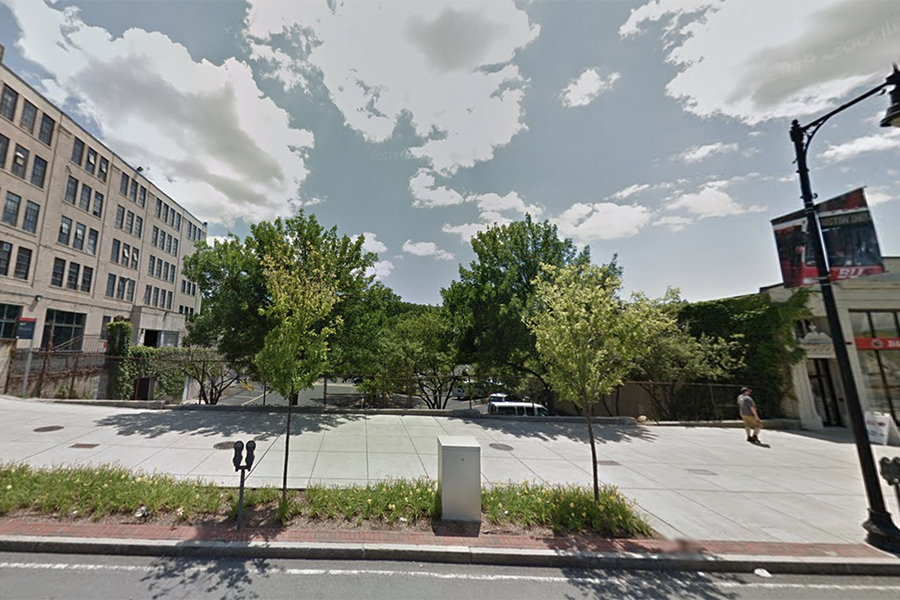 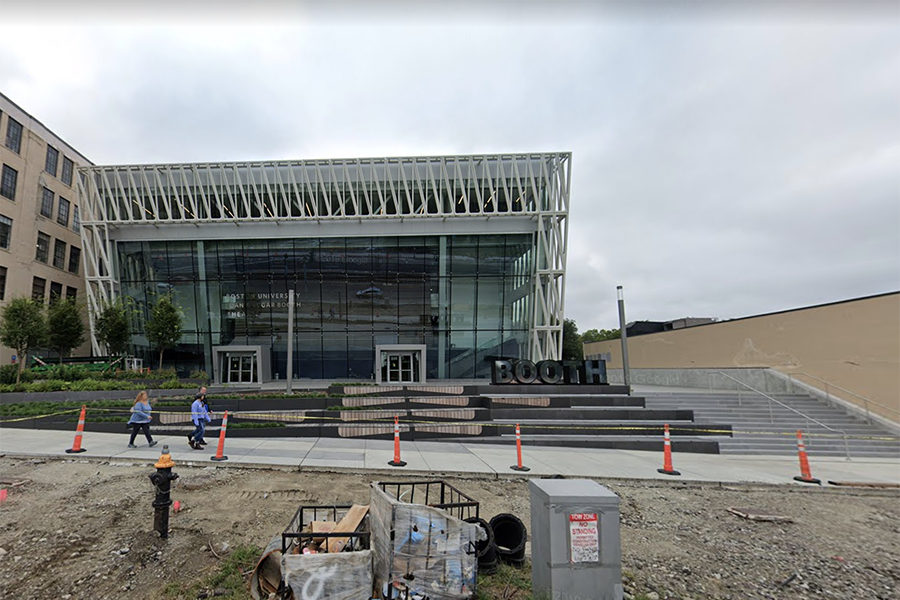 What better place to begin than on Comm. Ave., a public thoroughfare that runs from the outskirts of Newton straight through Brighton, Allston, Kenmore, and Back Bay until it hits the edge of the Public Gardens—but which from Packard’s Corner to Kenmore, is colloquially known as Boston University. And new campus buildings are changing the street’s topography all the time. If we start by Boston University West, we can walk beside the newly installed protected bike lanes, and take in the angled glass facade of the Joan & Edgar Booth Theatre, a colossal performing arts center built for the university in 2017. Keep walking past Boston University Central and Boston University East and we’ll see the parking lot-turned-Center for Integrated Life Sciences and Engineering, completed a few years ago, which is across the street from the recently approved Boston University Data Science Center—a 19-story high-rise that will be designed to look like a giant stack of books. 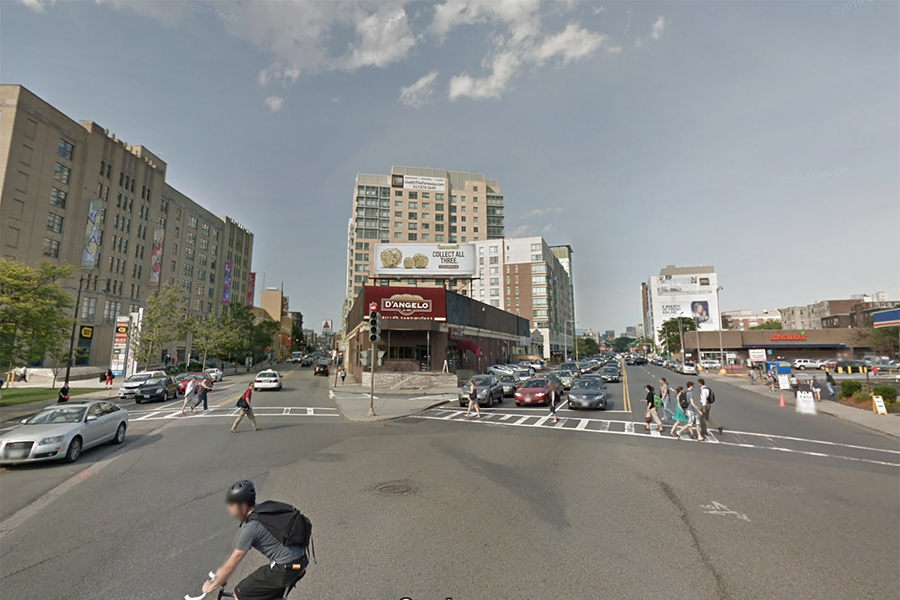 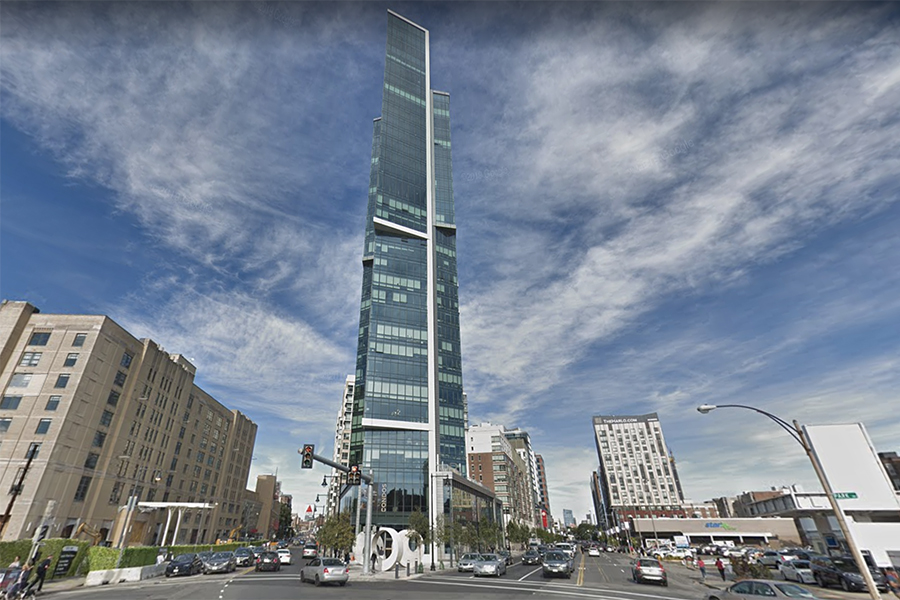 The intersection of Brookline Ave. and Boylston Street in 2011 vs. The Pierce in 2018. |Photos via Google Streetview

As we make our way into Kenmore, let’s turn off Comm. Ave. and onto Brookline, noticing how bright red sweatshirts fade into business casual attire. Beyond Fenway Park itself, the list of old buildings in Fenway is likely shorter than the list of new—luxury condo complexes and fast casual joints have sprung up at every corner in recent years. But one new construction rises, literally, above all of the rest: The Pierce, at 378 feet high, is the tallest tower in Fenway, and standing directly in front of it is like sitting in the first row at the movie theater. Crane your neck upwards to fully take in the grandeur of the 30-story residential building, and see if you can remember the days when Brookline and Boylston met instead at a D’Angelo’s sub shop. Now, the former cheesesteak sandwich haven is home to a ground-floor wine bar. 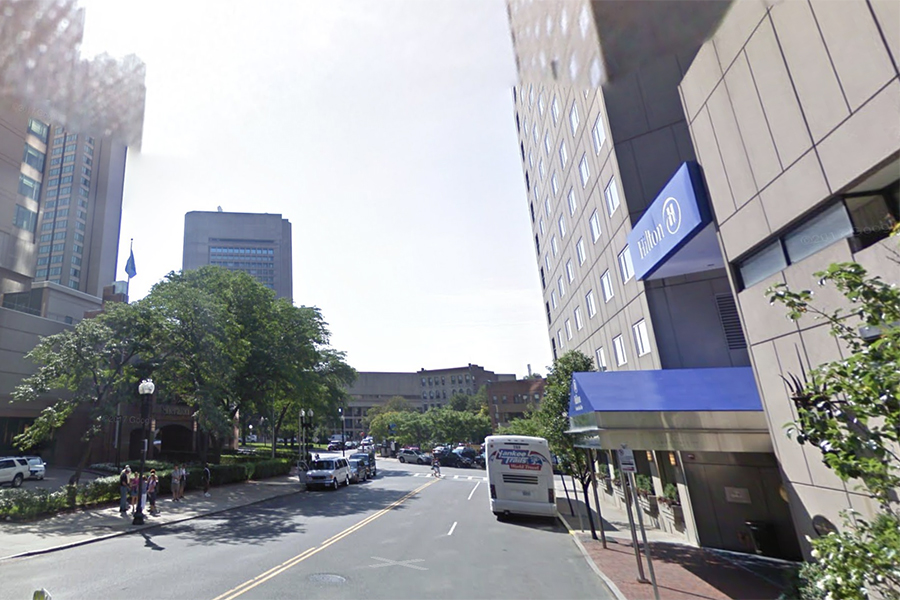 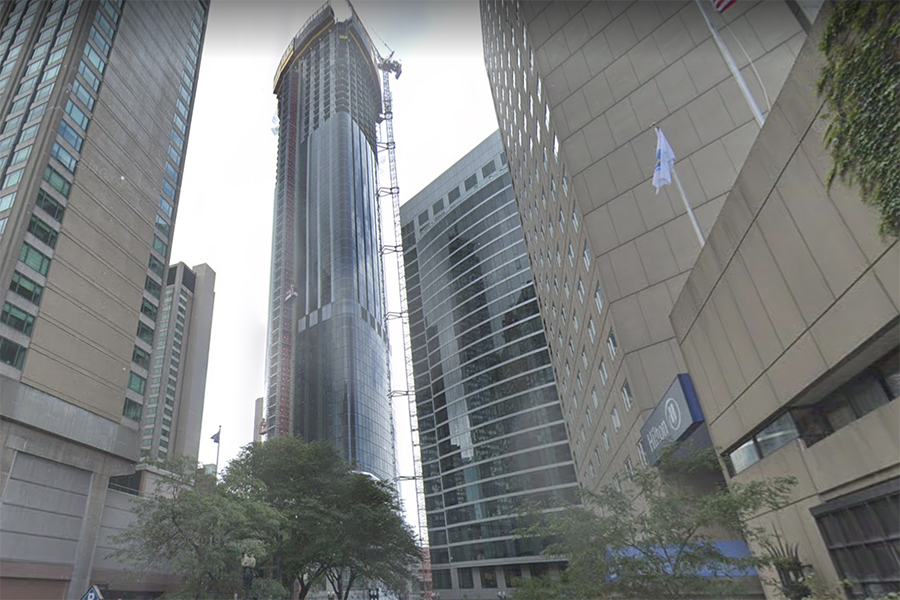 The view from Dalton Street in 2009 vs. an under-construction One Dalton in 2018 | Photos via Google Streetview

We’ll get out of Fenway by strolling through the Fens, ambling down Huntington Ave. and into Back Bay for a quick tour of some of Boston’s tallest buildings. (Don’t forget to look over to the MassArt Treehouse, a distinctive dorm that didn’t exist until 2012). This was, after all, the decade that saw Boston surpass New York as the city with the highest percentage of high-rise apartment construction. Though it changed its name in 2015, the massive mirror that is 200 Clarendon (formerly the John Hancock Tower) has owned the title of tallest since its construction in 1976. Forty feet below, the top of the Prudential has been an iconic part of the city skyline since 1964—but now it has neighbors. Standing 742 feet tall, the just-completed Four Seasons managed condos and hotel rooms of One Dalton now punctures the city’s silhouette as the third tallest building in Boston, and the tallest residential tower in New England. If you can manage to look out the window of one if its $40 million penthouses without catching vertigo, you’ll be nose-to-nose with the all-caps lettering of the Prudential sign. 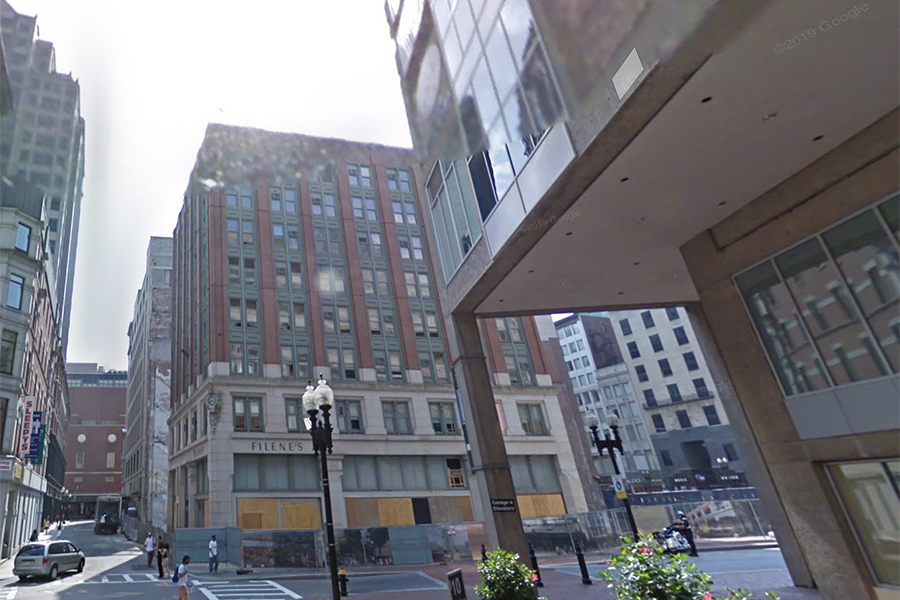 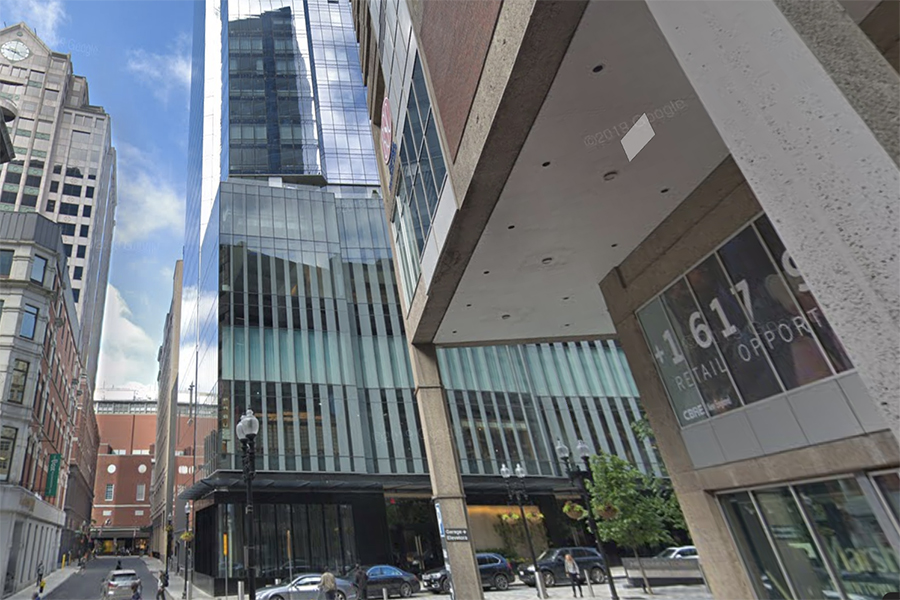 Filene’s at Downtown Crossing in 2009 vs. Millennium tower soaring out of frame in 2018. | Photos via Google Streetview

Let’s pick up the pace to make it over to Downtown Crossing, waving hello to the newly unionized Freedom Trail tour guides and the flock of tourists trailing behind them as we pass by the Common. Once downtown, we can climb up the Time Square-esque “stairs to nowhere”—though these ones are stone gray instead of flashy red—and look across at its accompanying Millennium Tower. After officially breaking ground in 2013, the bougie residential building opened its doors three years later as the Hub’s third tallest tower, before recently losing the bronze to One Dalton. Once upon a time, before it was home to some of the city’s priciest homes, it was the Filene’s flagship department store. In the perpetual Black Friday of Filene’s Basement, my sister once lost her purse to the black hole of its disorderly racks, likely mistaken for another piece of discount merchandise. These days, taking the escalator down into the building’s depths leads to a neatly organized expanse of Roche Brothers groceries. 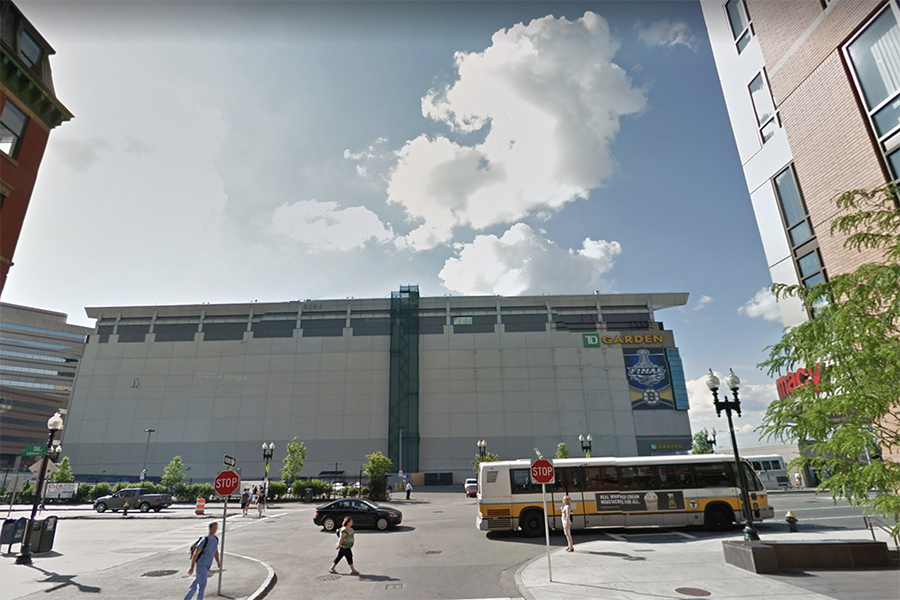 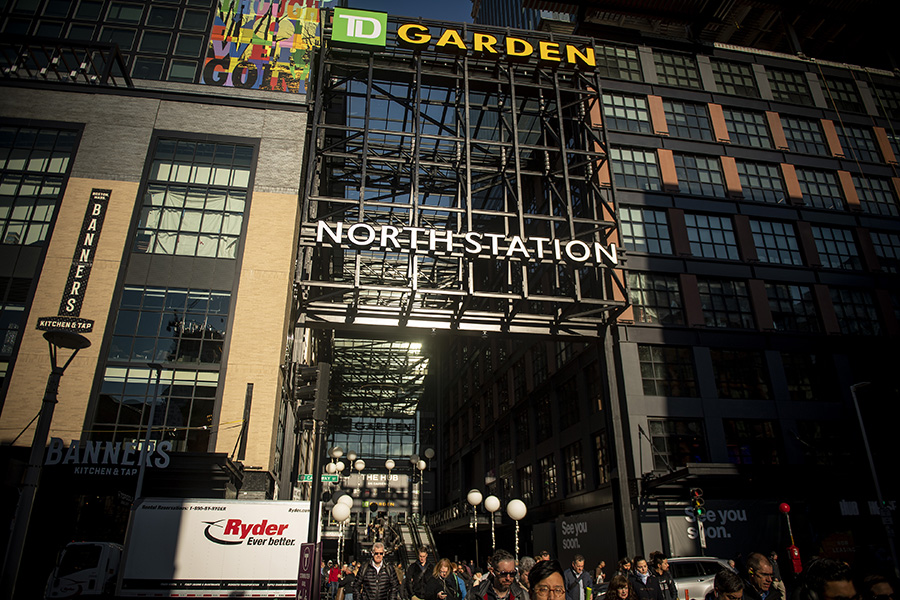 TD Garden in 2011 vs. The Hub on Causeway on the day of its grand opening, November 6, 2019. | Photo via Google Streetview (left) and Photo by Billie Weiss/TD Garden (right)

If we wind our way out of downtown and over to the West End, we’ll be smacked in the face with the brand new Hub on Causeway. The total North Station overhaul gave way to an expanded TD Garden, a 38-story apartment building, a music venue, a Guy Fieri restaurant, and so much more. Rising from the site of the former Boston Garden, the development transformed an area most only visited to catch the Commuter Rail or watch Celtics and Bruins games into a miniature metropolis.

We could keep walking through this past decade of development all day—we could even walk through another transit-oriented project, back in Brighton at Boston Landing. We could marvel at the way the ever-growing Seaport has materialized like a trendy pop-up store, seemingly overnight, since then-Mayor Menino first dubbed it the futuristic-sounding Innovation District back in 2010. We could walk across the Longfellow Bridge, which reopened last year after almost a decade of restoration, and take in the skyline from between the stone salt-and-pepper-shaker beacons. We could go shopping at Assembly Row, which started the decade as a series of asphalt lots and “barren fields,” and continues to develop into a self-contained shopping, office, and entertainment village. From there, we could look across the Mystic River at Encore Boston Harbor, the Vegas-based resort and casino that brazenly bursts from the low-profile Everett outline.

And that’s all to say nothing of what’s to come. The next decade will usher in Winthrop Center, which is slated to unseat Millennium Tower as the fourth tallest structure, even after losing a good 80 feet to the debate over the shadows it would cast on the Common, and quite possibly the second Seaport at Suffolk Downs. We’ll build up, we’ll build in, we’ll build out. And, assuming we can still afford to live here, we’ll watch it all alter the skyline once again.

This was the decade that proved that construction is as much as part of Boston as its history, and if we had enough time, we’d bring this walking tour through all of the city’s corners, taking in their landscapes as they are now before they inevitably change. But all this walking has made us a little tired, and honestly, that beer doesn’t sound so bad—–though we’re ditching Cheers for one of our favorite local breweries.