Boston’s real estate market is hotter than ever—approximately 78.4% hotter, according to a new report from the Boston Municipal Research Bureau. From 2013 to 2019, the city’s total taxable property value increased by $72.3 billion, bringing the value up to a staggering $164.5 billion in the 2019 fiscal year.

The astronomical increase isn’t the result of one development in particular, but rather an uptick in property values across the board, the bureau says. A combination of rising property values in existing real estate and an ongoing construction boom—you know, the commercial properties and luxury complexes popping up on every corner—have propelled the city’s value to a record high.

However, the report found that new growth, or “additional taxable property value generated by new construction” was responsible for nearly 60% of added property tax revenue in 2019. Per the Boston Globe, had every real estate sale over $2 million been taxed at 2% over the last decade, as Mayor Walsh has signed a home rule petition in support of, the city would have collected an average of nearly $169 million annually.

And while the city grew all over, its property values didn’t soar equally across the map. In the Seaport, for example, the total property value escalated by 181% between the 2013 and 2019 fiscal years, while West Roxbury and Roslindale saw a more modest 42.4% growth during the same timespan. Mission Hill also experienced an increase of more than 100%, while neighborhoods such as Hyde Park and Mattapan were slower to gain property value, growing at a rate of 51.3%. 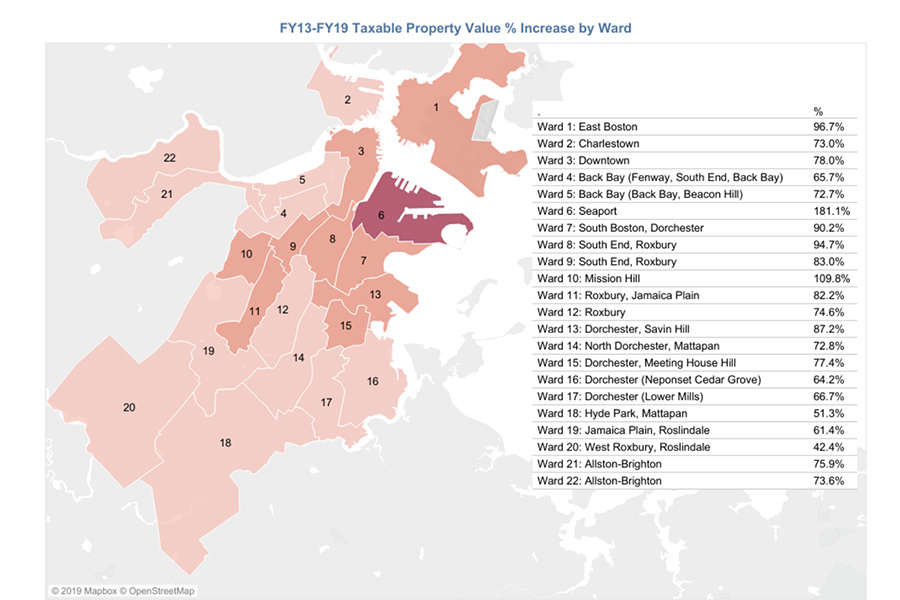 While rapid development may have been a boon for property values over the past six years, the bureau is quick to point out that this roller coaster can’t go up forever: “Boston should keep a close eye on spending to ensure it has the ability to sustain quality city services and infrastructure,” the report says, “including commitments to address challenges around housing, transportation, education and equity, when the current pace of economic development slows.” City of Boston, take note.

This report is part one in a five-part series on Boston’s property values—so stay tuned.