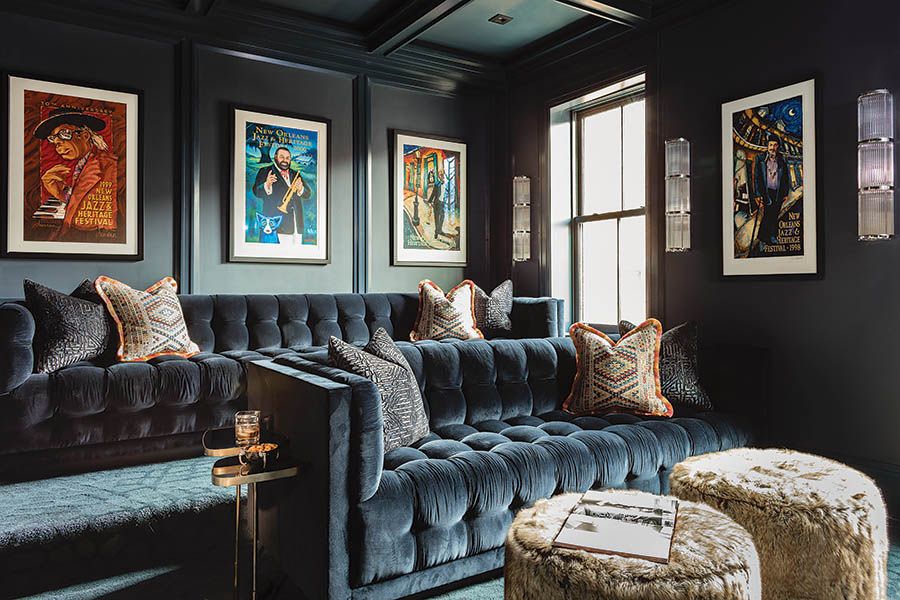 After purchasing this South End brownstone, a newlywed couple tasked Embarc with transforming their outdated townhouse into an inviting family home. So, when the Boston-based architecture-and-interiors firm suggested creating a media room where the owners could host movie nights for relatives and friends, the pair said, “Absolutely,” interior designer Nicole Farkas recalls.

The ensuing project encompassed both cosmetic and structural changes to the existing space, located on the home’s lower level. To kick things off, architect Mark Van Brocklin worked with contractors at Pre-Con Construction Company to gut the room and build new, tiered floor plates, which mimic stadium seating. Next, to set the tone of the reconfigured 200-square-foot area, Embarc designers implemented a monochromatic color scheme, opting to paint the walls Benjamin Moore’s “Abyss” rather than black. “You want a movie room to be dark, but we didn’t want the space to feel lifeless,” Farkas says. The built-in wet bar, crafted by Herrick & White with a glimmering stainless steel backsplash and nickel hardware, also received the midnight-blue coating so that it recedes into the background. “Once the lights are off, the main purpose of being there is to watch a movie,” Farkas says, noting that multiple paint colors would be distracting. 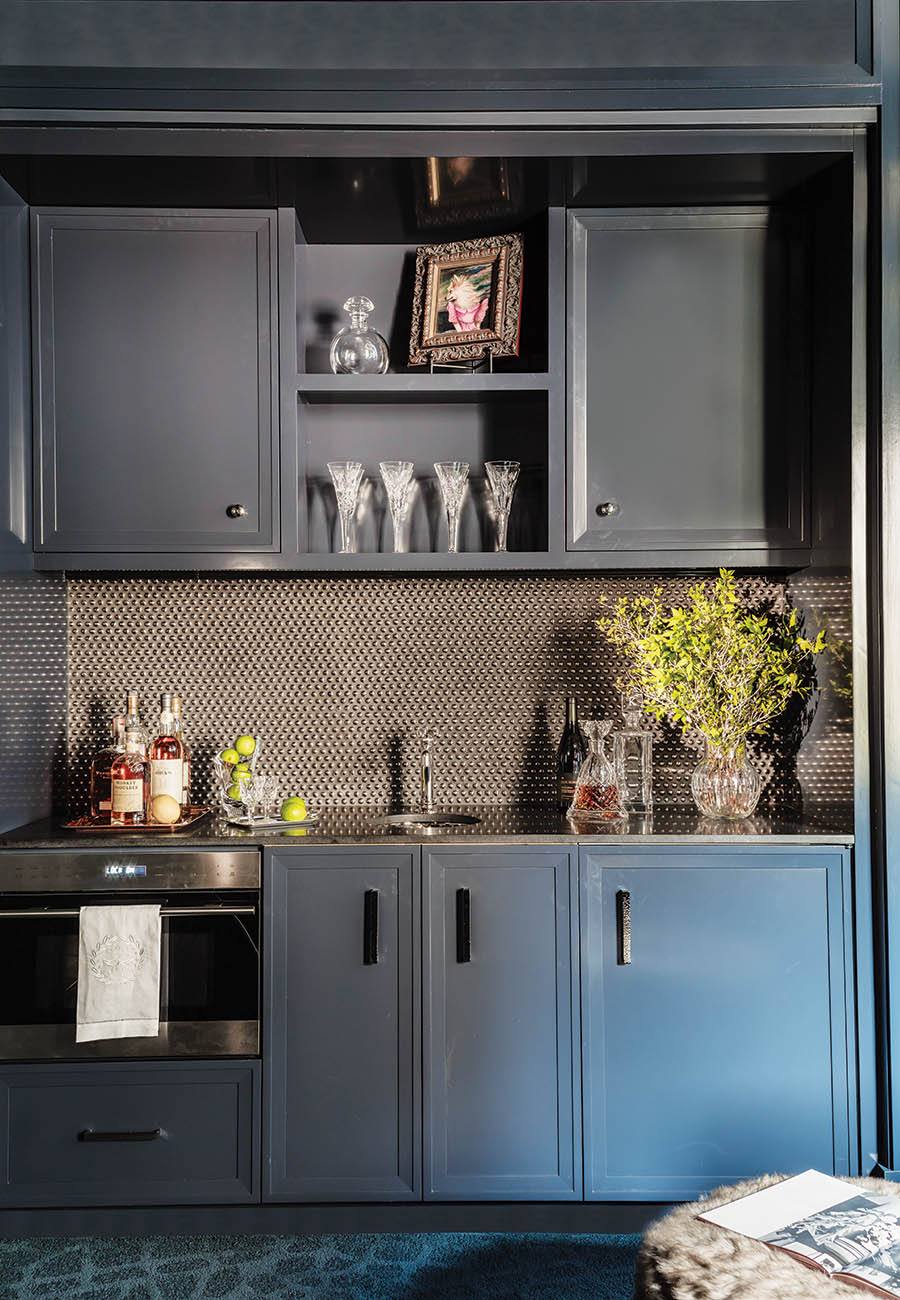 In keeping with the moody palette, the furnishings do double duty by introducing a layer of texture. Although the custom broadloom carpet from Merida immediately caught the designers’ eyes (see: the rug’s bold geometric pattern), the wife wasn’t sold. After the installation, however, “She loved it,” Farkas says. The two bespoke sofas match the rest of the home’s transitional aesthetic, while their tufted-velvet upholstery conjures a cozy vibe.

As for the accents, Farkas and her team ditched the dark tones for a few pops of color—namely the Embarc-designed pillows, which play off of the room’s Newport Jazz Festival posters. At first, the wife felt hesitant about displaying her husband’s whimsical art collection, but again, she became “obsessed” with the designers’ selections, Farkas says. “[The clients] were willing to trust us,” she adds. “We took a few risks, and I think it came out really [well].” 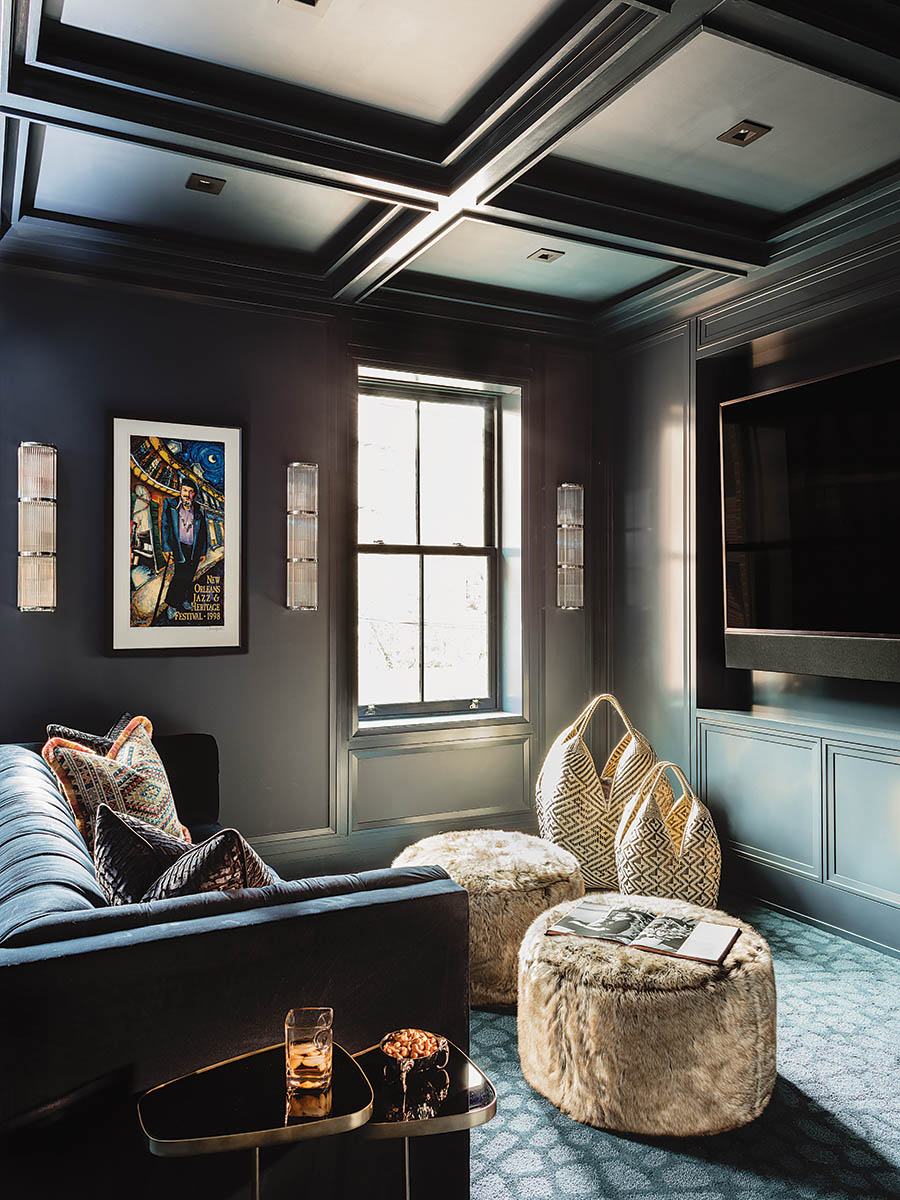 Spaces: Rising to the Occasion