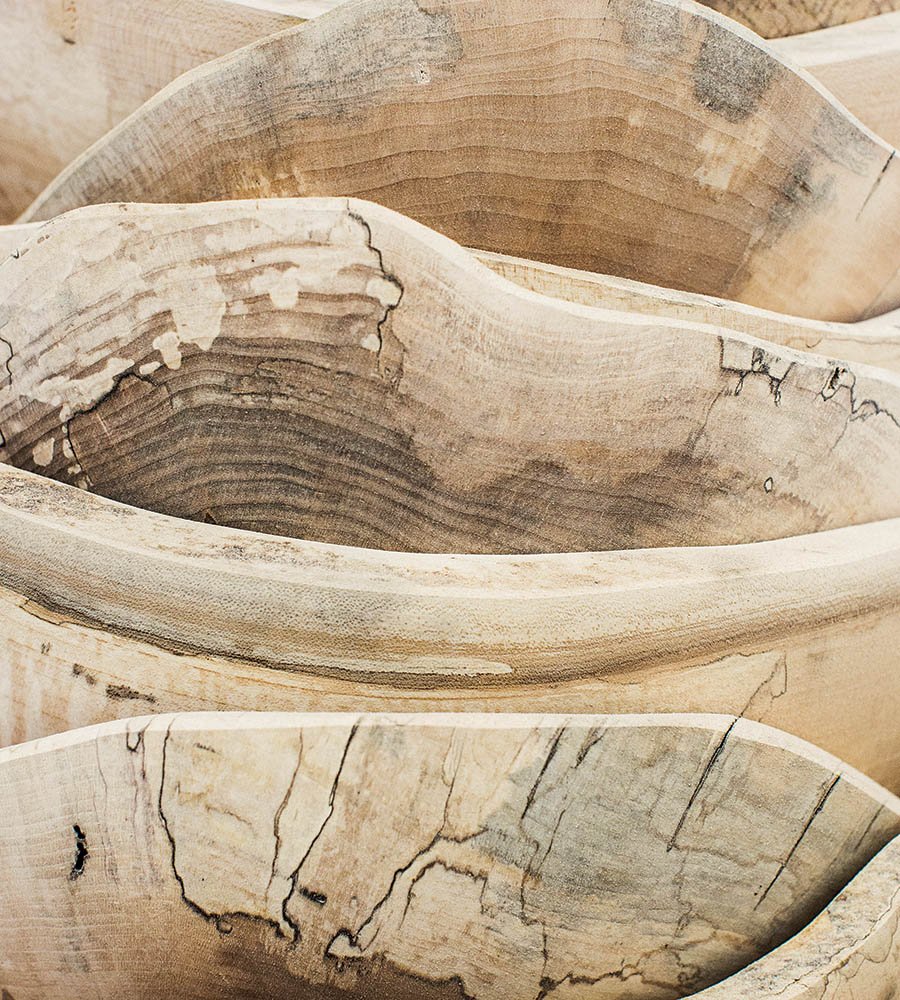 Spencer Peterman moves through his Massachusetts home—a renovated 18th-century tavern in Gill, near the Vermont border—pointing out everything that he’s either reclaimed or restored. The maple dining table. The original brick fireplaces. The 19th-century wagon out front. “Everyone wants new, new, new, but I [like] buying old and repurposing,” Peterman says. It’s in the adjacent 2,500-square-foot building, where he makes the wooden wares he sells as co-owner of Peterman’s Boards and Bowls, that his knack for recycling materials truly shines, though. Sawdust covers everything—the floor, the equipment, and even some workers’ beards. “I help people get rid of their wood, and then I make something beautiful out of it,” Peterman says.

Wood has long been one of Peterman’s preferred mediums. Before his current venture, he crafted Nantucket lightship baskets out of wood and rattan and sold them for $2,000 a piece. But weaving a basket was tedious. So when he saw artisans selling wooden bowls at trade shows, he thought, That would be a lot easier, Peterman recalls. “I could sell a bowl for the same price as a basket, but it would only take a half-hour [rather than] two weeks [to create].” 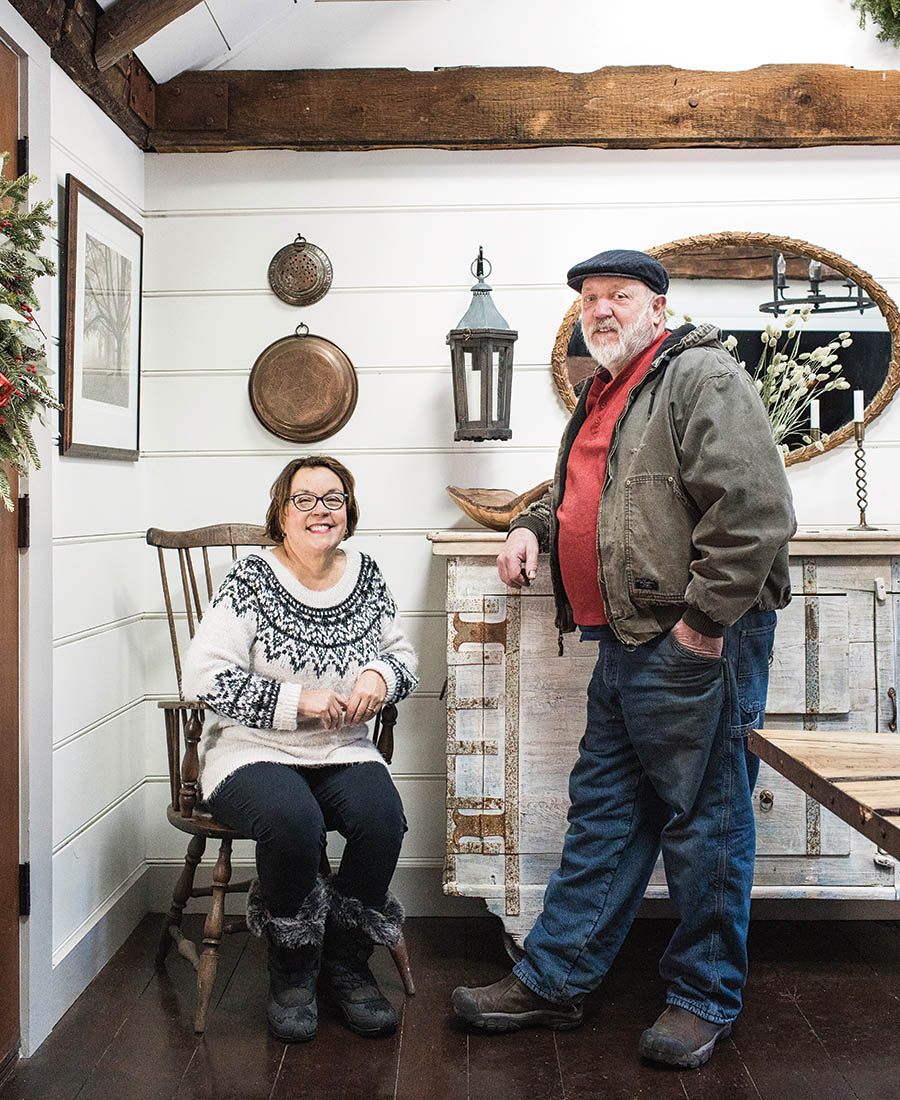 The soon-to-be-married co-owners, who met at a trade show in the late ’90s, have spent the past decade restoring their home, which is said to be the oldest house in Gill. / Photo by Jesika Theos

And so, the maker—described as a “Renaissance man” by his business (and life) partner, Michele Jurado—spent the late ’90s teaching himself how to transform a piece of wood into a bowl. He constructed his own lathe, welded his own knives, and designed his own belt sanders. Quickly, his efforts paid off. Retailers scouring the trade shows Peterman attended noticed the unique wood patterns, smooth edges, and food-safe finishes. By the early 2000s, he stopped selling baskets and focused his business on bowls, later introducing items such as cutting and serving boards to his family of products. And in 2012, when Peterman outgrew his space in Turners Falls (where the boards are still made), he expanded to an acre-plus lot in nearby Gill, which now holds his workshop, home, and gallery. Three years later, he started selling his creations at the Boston Public Market.

Today, bowls ranging from 8 to 21 inches in diameter line the shelves of the company’s airy, Gill-based gallery. Cutting boards hang from the crisp white walls, while napkin rings, salad tossers, and bottle stoppers fill the rest of the space. Wholesalers, including Boston-based Good, make up about 60 percent of Peterman’s Boards and Bowls’ business, but this small gallery in rural Massachusetts brings in about a quarter of their sales. “This is [Gill’s] main drag, so people going to the Berkshires stop in here because they see the bowls [out front],” Jurado says, noting that the display has even lured in movie star Sam Elliott. “It does really well.” 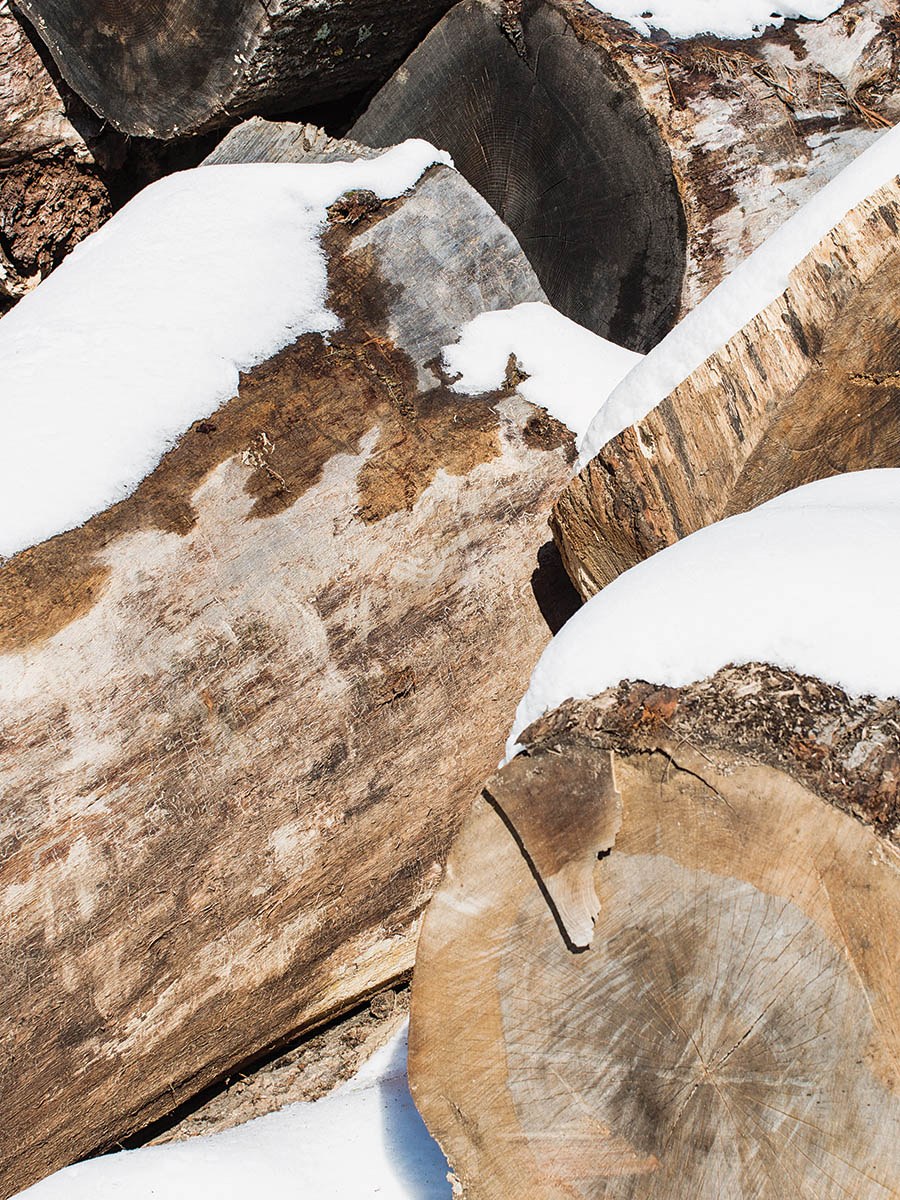 “Not many bowl turners upcycle local woods. It takes a lot of coordination with the local tree services to make that happen,” co-owner Michele Jurado says. “Spencer has developed a special relationship with them over the years.” / Photo by Jesika Theos

The beginning stages of creating a bowl—the team’s signature product—are a lot less glamorous. The biz revolves around recycling—a.k.a. “upcycling,” which Peterman says he’d been doing for 20 years before it became “trendy”—loads of logs. The team separates the wood based on species (maple, cherry, walnut, oak), but because maple doesn’t have “much character,” shop foreman Jay Rider says, those logs are first tossed into a pile to spalt, allowing fungi to grow inside. The result? Thin, black lines that swirl through the wood. Next, a bowl turner bolts a chopped log onto the lathe. When the machine starts spinning the wood, the staffer carves the bowl by pushing and pulling on a lever attached to a steel knife. The craftsperson continues to make smaller and smaller bowls out of the log’s excess wood. By the end of the day, Rider says, he’s typically turned about 50 bowls. He then loads them into one of three outdoor kilns, heated between 100 and 120 degrees, to dry until they contain only 6 percent moisture. This sweet spot decreases the chances of cracking. 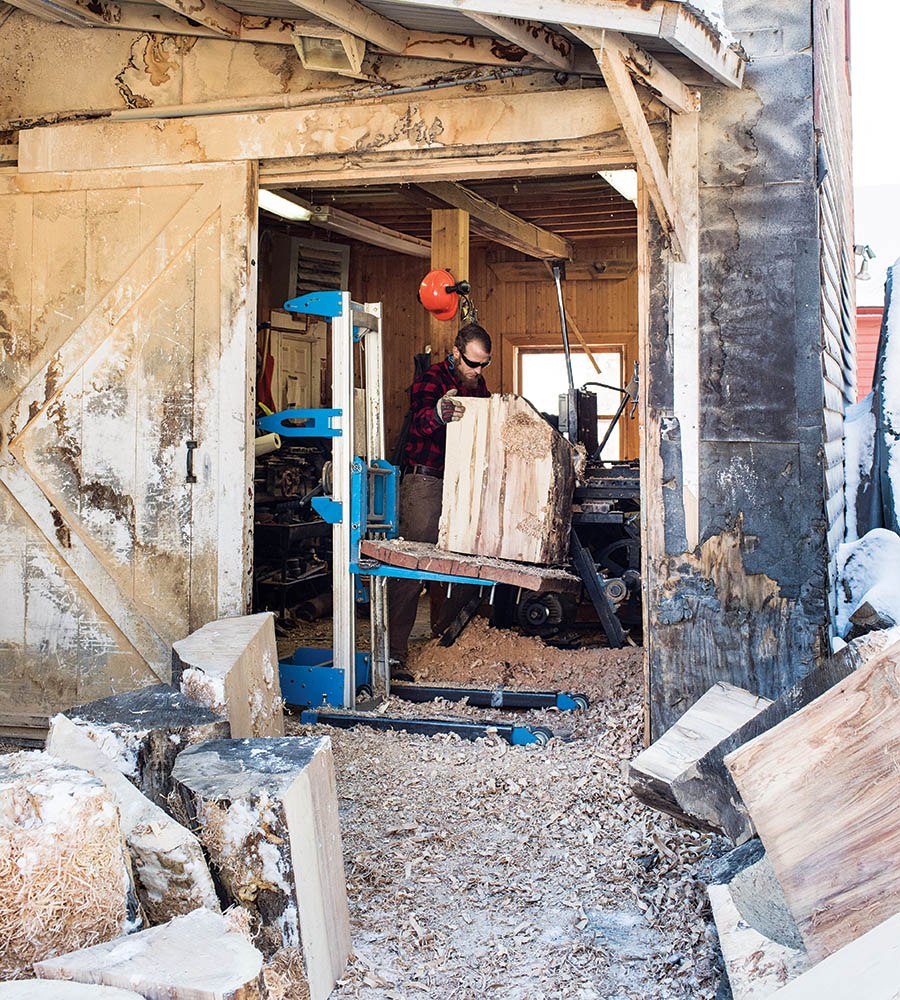 Before bolting a piece of wood onto the lathe, bowl turner Wesley Otto hoists the log up with a lift. / Photo by Jesika Theos 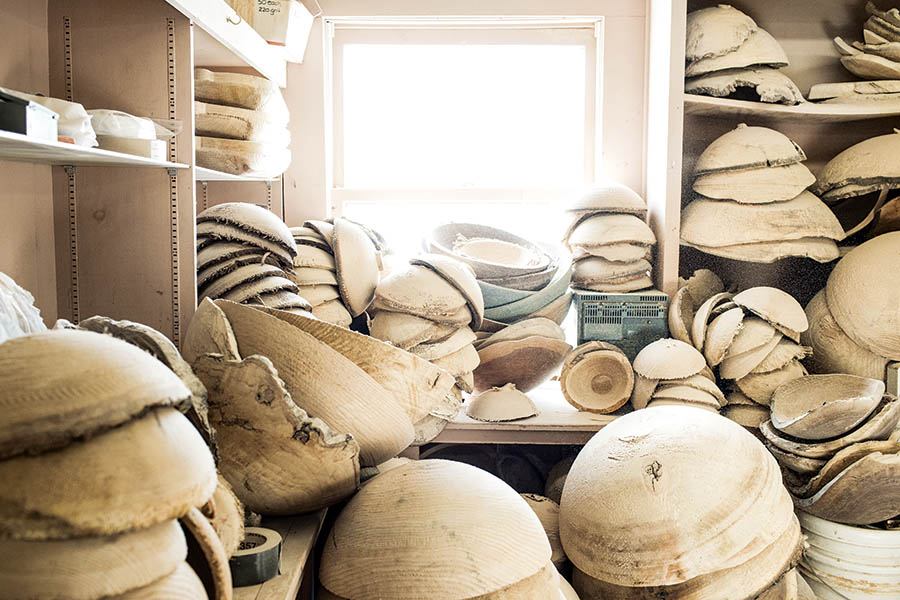 Stacks of bowls await the sanding process inside the 2,500-square-foot workshop. / Photo by Jesika Theos 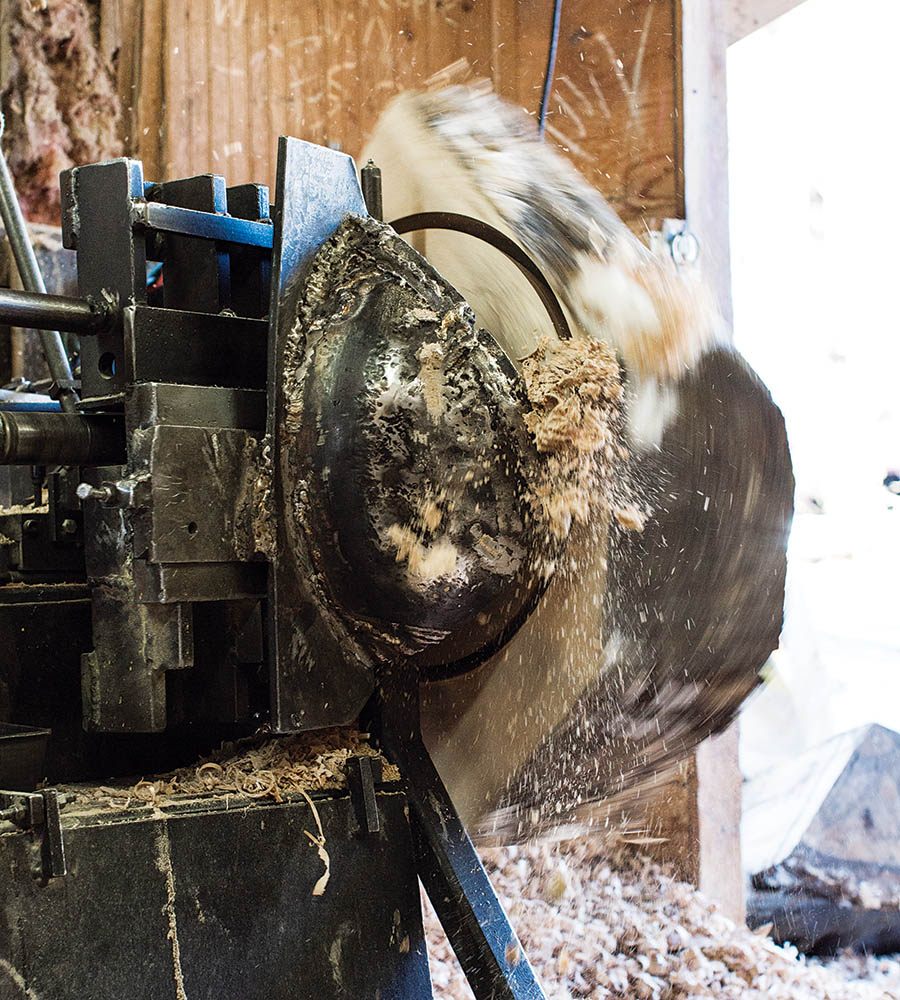 The custom steel knives sport a curved edge to carve out the bowls. Due to the sheer size of the log it’s cut from, a 21-inch bowl takes nearly twice as long to make as its smaller counterparts. / Photo by Jesika Theos 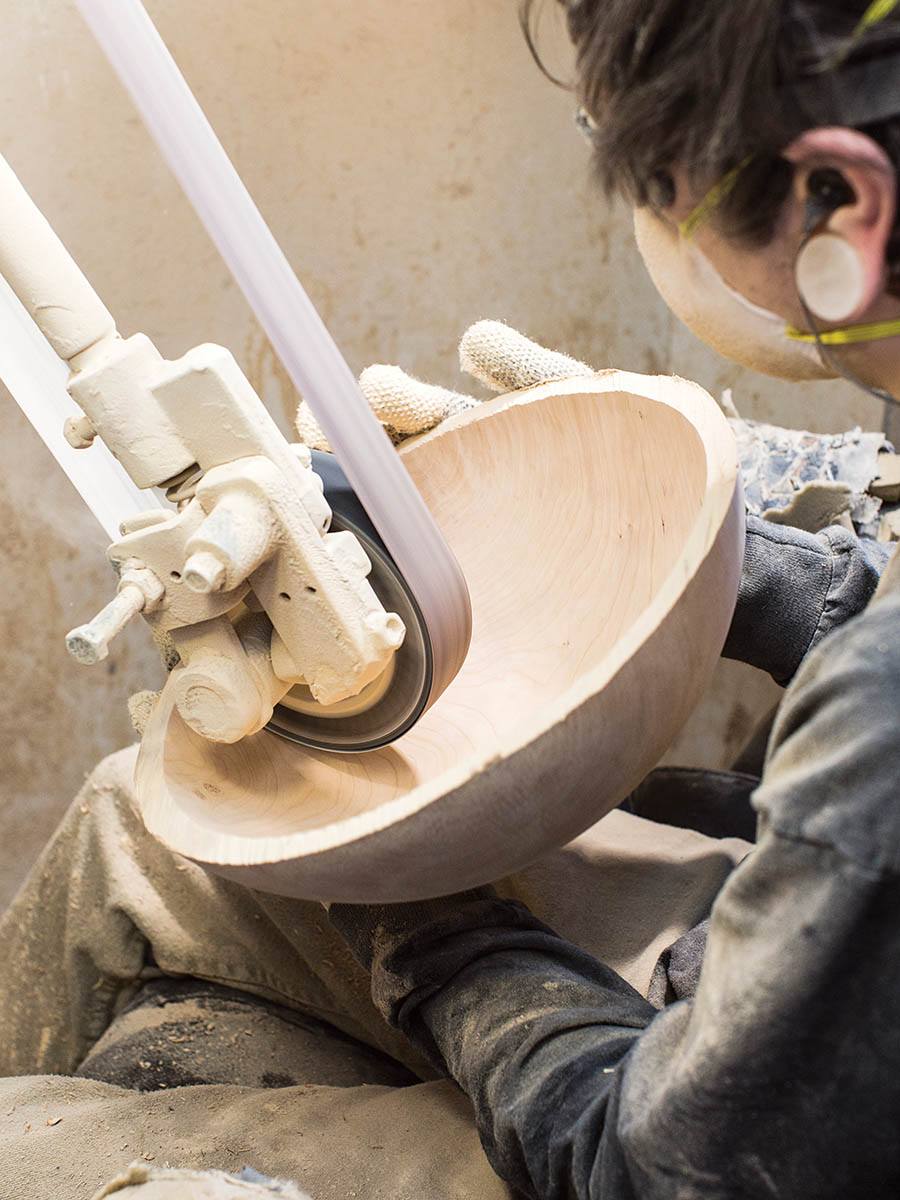 Depending on the softness of the wood, sander Pat Lapinski chooses from one of three grades of sandpaper to use for smoothing out imperfections. / Photo by Jesika Theos

After one to four weeks of drying, the bowls are ready for the finishing touches. Back inside the workshop, staffers smooth them out with palm and custom belt sanders and fill the imperfections with sawdust. “Our trees have been sitting out for years and crack on the outside, so we have to deal with that,” Peterman says. “But that’s what gives [the bowls] character.” Finally, team members stain the vessels with house-made mixtures before displaying them in the company’s galleries or shipping them across the country. 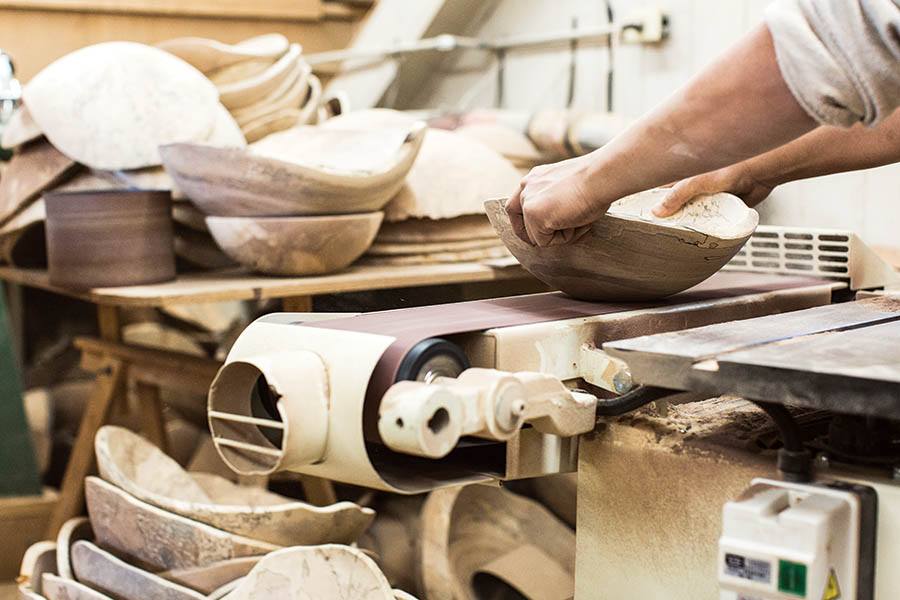 The manager of the finishing department, Josh Ruiz, flattens the bottom of a bowl with a horizontal belt sander. / Photo by Jesika Theos

It’s the local community that makes these national sales possible. About 99 percent of the company’s wood comes from Franklin County, and their employees are all from the area. Peterman and Jurado have worked hard to foster a family-like atmosphere among their 25 staffers. The co-owners say this tight-knit team and the local resources set them apart from their competition. “I’d like to grow,” Jurado says. “But, I [want] the quality to stay. I don’t want to become cookie-cutter. I like [our] individuality.” 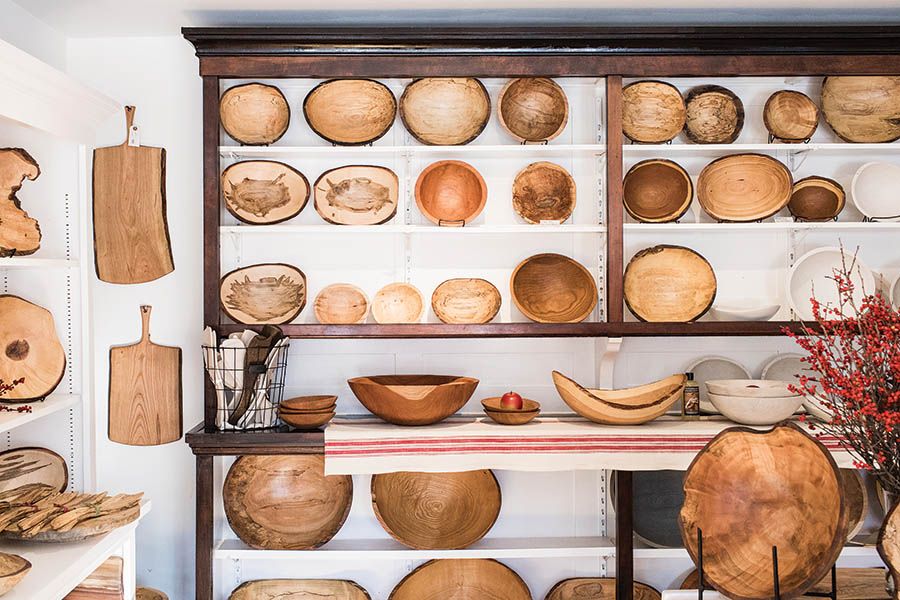 The Gill gallery—stocked with bowls, cutting boards, and salad tossers—is busiest in the fall, when people are traveling along Route 2 to the Berkshires. “We do more [business] here in a day than we used to in a year over in [Turner Falls],” Peterman says. / Photo by Jesika Theos 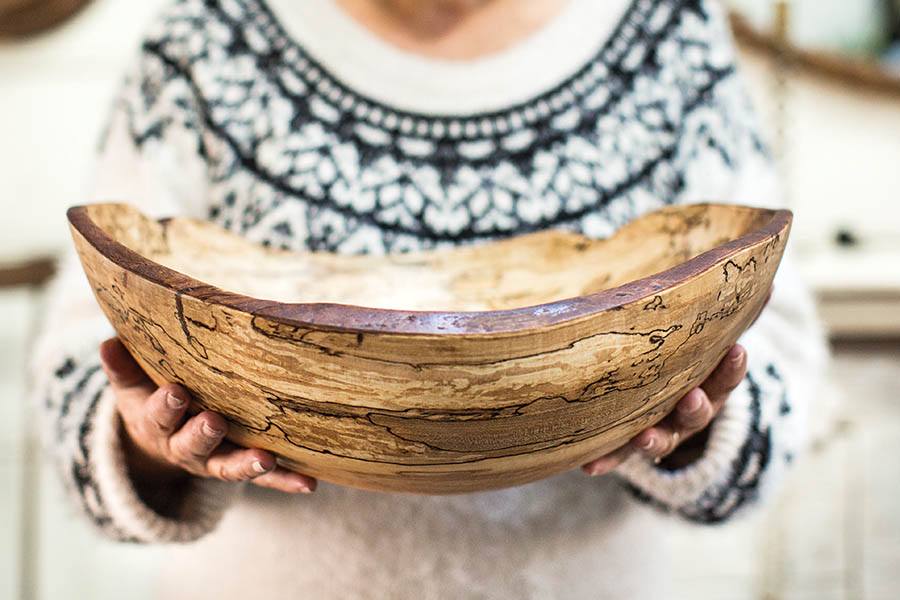 “I’m really proud of our product,” Jurado says, noting that spalted-maple bowls are her favorite offering. / Photo by Jesika Theos