Bringing small groups of strangers into people's homes is pretty much the opposite of social distancing. 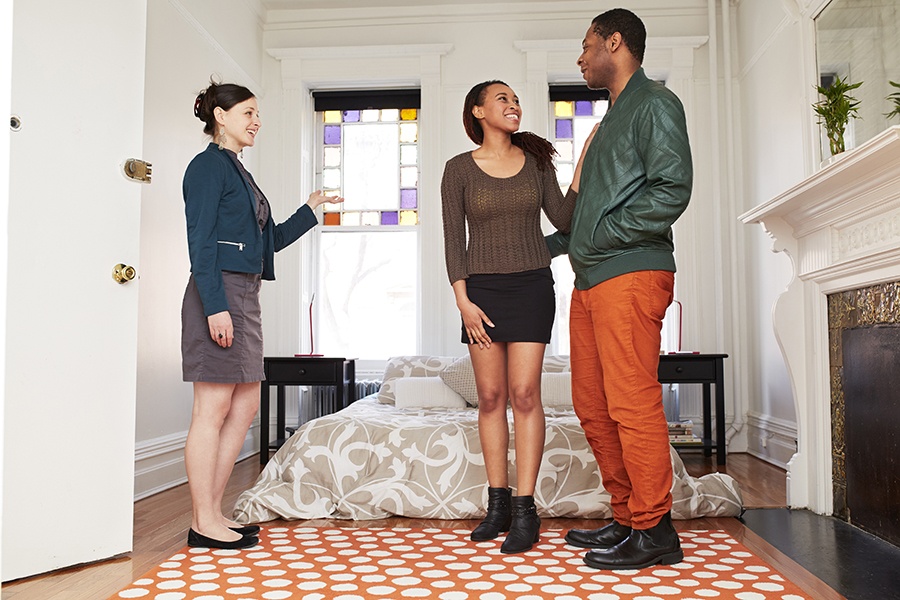 Updated on March 20 at 4:40 p.m.: The Mayor’s office informed Boston that Mayor Walsh has issued a letter to landlords, realtors and rental brokers officially requesting that they alter their practices around apartment showings.

“These adjustments are being made to limit contact between unrelated parties to slow the transmission of COVID-19. In addition, medically vulnerable tenants may reside in apartments that will be put on the market for rent. Showing these occupied apartments may put a tenant at risk,” the letter reads. “We also recognize that tenants, especially college students, are looking to sublet or otherwise move from their current living situation very quickly. We are asking all brokers to work closely with these tenants to identify suitable alternatives to an in-person showing to the greatest extent possible.”

The letter outlines several precautions that brokers need to be taking, including: Using videos, photos, and descriptions of properties in place of tours, as much as possible; refraining from showing occupied units unless “absolutely necessary” and even then “with as much advance notice as possible”; prospective tenants who are ill are prohibited from viewing a unit in person; open houses should not be held, and individual showings should minimize contact and follow all other CDC-recommended precautions for limited the spread of COVID-19 (washing hands, sanitizing surfaces, maintaining a six-foot distance, the whole nine yards.”

On March 15, Mayor Walsh announced a public health emergency in Boston, and since then, restaurants have closed or shifted to takeout-only, gyms have locked their doors and laid off employees, and every event anyone had lined up for the next month has been cancelled. The city has collectively shrunk back into its shell in the name of social distancing, to prevent the spread of COVID-19. And then, on Tuesday morning, Allston resident Eric Walker received an email from a broker asking if he could please bring a small troupe of strangers into Walker’s apartment at 5:30 that evening for a tour.

He’s not alone. On top of having to cough up a month’s rent or so to pay brokers fees (and putting up with some pretty perturbing experiences along the way), some Boston tenants are reporting that brokers are now repaying the favor by bringing prospective tenants into their homes for apartment showings—in the middle of a pandemic. So, pretty much the opposite of social distancing.

Allston-based Realtors: WHAT THE FUCK ARE YOU DOING STILL SHOWING UNITS?

Walker, who lives in Allston with three roommates, says the broker came into the apartment that night with a group of four people, who walked around the place and politely poked their heads into his room one at a time. In total, he estimates the tour lasted about five minutes, and the broker took a video so that he could limit future showings. But still, Walker says, “If we’re supposed to be eliminating human interaction, to have people that by definition you don’t know, in groups, come here—it just seems kind of ridiculous to even think that would be a good idea.”

The CDC reports that the incubation period for COVID-19 is two to 14 days, meaning people can carry and spread the virus for up to two weeks before experiencing any symptoms, while some never present any symptoms at all. And, according to Harvard Medical’s online resource center, coronaviruses can remain in the air for up to three hours, and survive on surfaces such as plastic and stainless steel for two to three days. Which means it’s virtually impossible for brokers to take enough precautions to ensure neither current tenants, prospective tenants, or themselves are exposed to the virus.

Walker admits that he isn’t part of the highest-risk group. “None of [my roommates and I] necessarily need to worry about it as much, as young professionals in their mid to late 20s,” he says. “But I think as most people are realizing, the actual issue is that someone could come in here and then I am a carrier that kills my father who has a respiratory condition. It’s that guilt associated with any unneeded risk.”

While the awkward walk-through may be a time-honored tradition of renting in Boston, it’s really not necessary, says Tina Bacci, leasing agent for The Abbey Group’s Fenway properties. “In the spring rental season, we will rent over 130 units among The Viridian, St. Germain Apartments, and Landmark Square, and anywhere from 30 to 40 percent of those apartments will be rented sight unseen.” A large reason for that ratio is on that Match Day, which this year is March 20, medical students from all over the country are placed in Boston, and many need to find somewhere to live without being able to come see units person.

Using tools such as amenity and building photos, floor plans, and photos and videos of individual apartments (both unstaged and staged, in different styles), they give prospective tenants a comprehensive visual of the residence. And, “now that showings have been halted, we are also working with the current residents and asking them to share photos and videos of their spaces,” Bacci says, and even connecting prospects to current residents who are willing to share their feedback on the building.

Leasing an apartment without first seeing it for yourself can feel uncomfortable, Bacci acknowledges—how do you know if you’re “being scammed or not getting the full story”? She recommends researching the broker, building, and neighborhood, as well as making the broker aware of any specific dislikes or wants that are important to you. One way that renting remotely can actually be preferable to an in-person tour, according to Bacci, is “when explaining apartments to prospects who will be renting sight unseen, we have a policy of listing pros and cons. For example, if an apartment is a fourth floor walk-up but is in the building closest to the laundry center, both features will be pointed out.” Whereas, “when we show apartments to someone in person, we don’t generally call out the negative features.”

Even buildings who aren’t as accustomed to Match Day leasing have called off showings for the time being, and are opting for virtual tours. In fact, Bacci says, “Very few brokers are still doing in-person tours of currently occupied apartments.” Rental listing site Zumper has even begun integrating virtual and video tours into some of their listings, so that browsers can get a better idea of a unit before even contacting the broker. Still, calls to several Allston-based management companies confirmed that they’re continuing with in-person showings, though they say they’ve received pushback from current tenants.

Renting in Boston, and specifically in non-luxury buildings, has always meant dealing with murky renter’s rights. But in the middle of a pandemic, it shouldn’t mean you’re at higher risk of infecting yourself and others. “I’d recommend observing social distancing recommendations and shifting to virtual leasing for the time being, for the health and safety of everyone involved,” says Bacci. “For the sake of flattening the curve, I would encourage agents, brokers, landlords, and property managers to create policies that are part of the solution rather than part of the problem right now.”

Boston reached out to the mayor’s office to ask if they were planning any restrictions or recommendations for brokers regarding apartment showings in this time, and will update with their response.