Located in Concord, the sprawling house features ample space for paintings and sculptures. 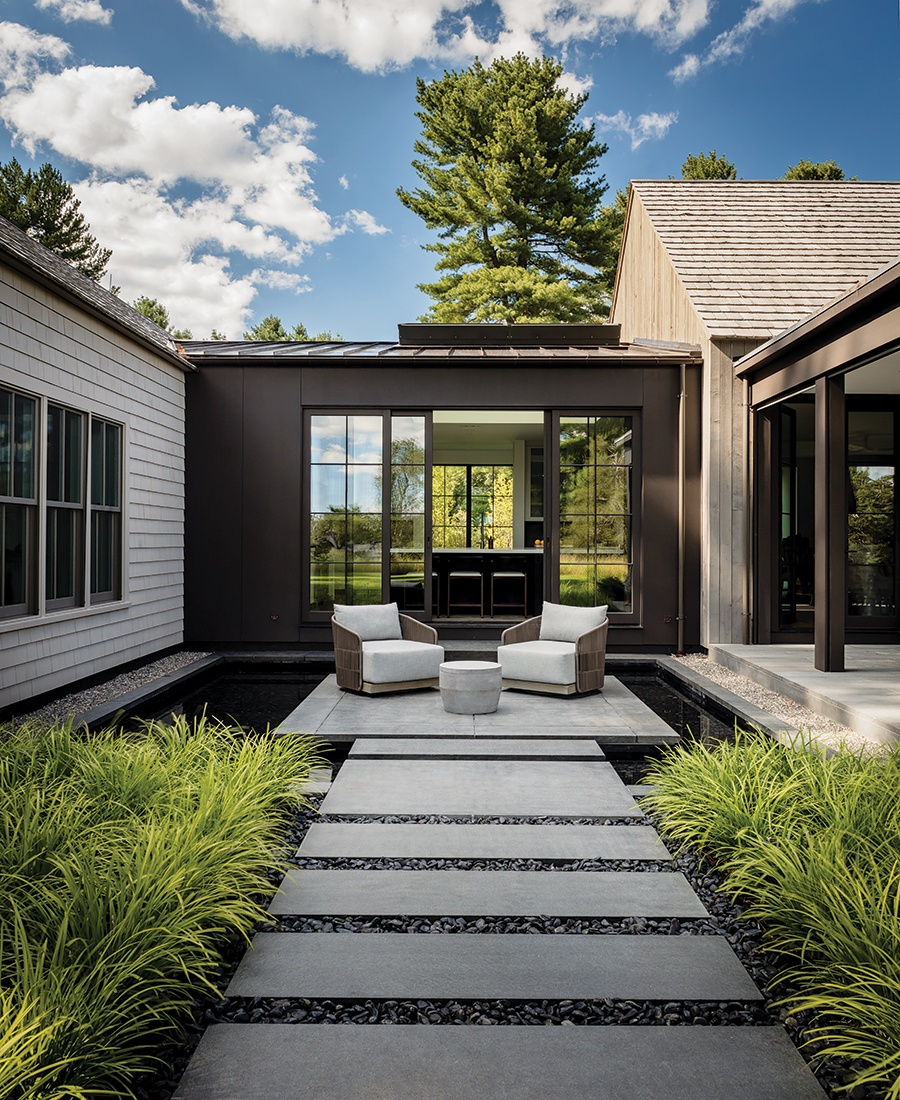 Granite pavers lead to a reflecting pool just off the kitchen, where the owners like to sit with a cup of coffee in the morning. Off to the side, a screened porch doubles as a covered terrace when the screens are rolled up. / Photo by Michael J. Lee

Their story begins in 2017, when the Connecticut-based couple purchased several acres of farmland in Concord to move closer to extended family. To help create their forever home, they sought an architectural firm that understood the region’s historical significance—particularly its proximity to numerous Revolutionary War sites—and wouldn’t design “some mammoth home that didn’t suit the area,” the wife says. After reviewing numerous portfolios, the couple chose Hutker Architects because the firm’s houses “really speak to their locations,” she says. The couple had one proviso: The project had to be completed by the following year, when their daughter would start 11th grade. The clock was ticking.

Jim Cappuccino, a principal at Hutker, and his associate Erin Levin got to work immediately. Cappuccino visited the clients’ then-home, which overlooked Long Island Sound in Fairfield County, to observe how the family of four used their space. He and Levin walked the Concord property with the couple, visualizing the building together. And they took copious notes, detailing the clients’ requirements for their new home. At the top of their list? Ample space to display their extensive collection of contemporary art. “We wanted art in every room and all around us; we wanted to be able to live with it,” the wife says of their collection, which they’d acquired during their travels over the years, as well as from the husband’s sister, who owns an art gallery in Barcelona. At the same time, the couple wanted “tons of windows and the ability to open the house entirely to the outside.” The question was: How do you design a bright house with big windows and enough wall space to hang art? 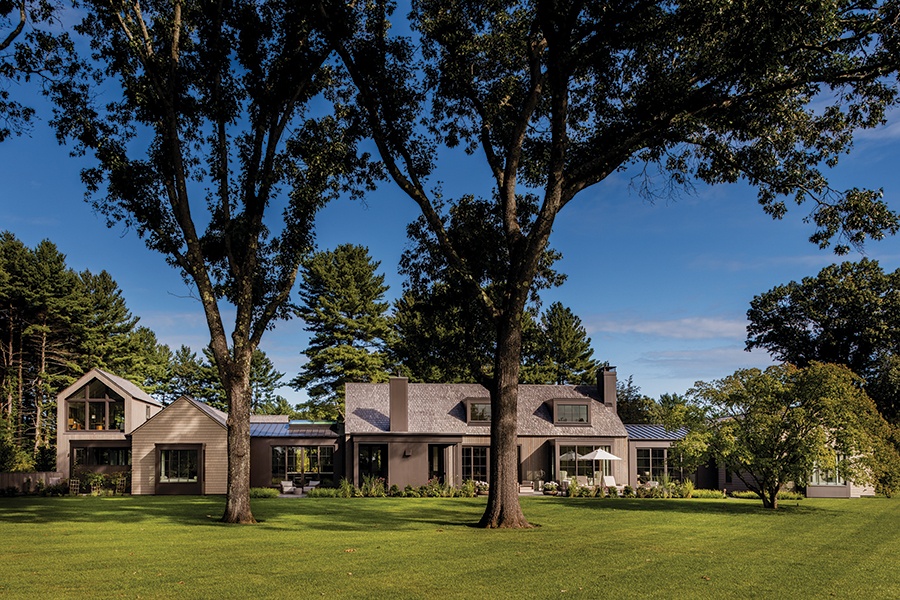 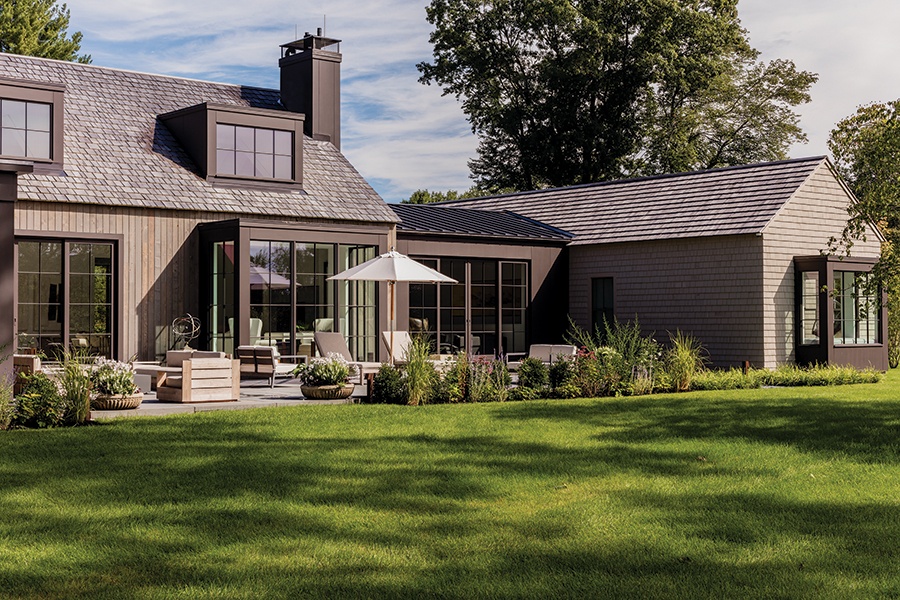 A sunlit, floor-to-ceiling glass bump-out in the living room provides a cozy nook for the family’s game table. The patio outside includes a fire table and a second reflecting pool. / Photo by Michael J. Lee 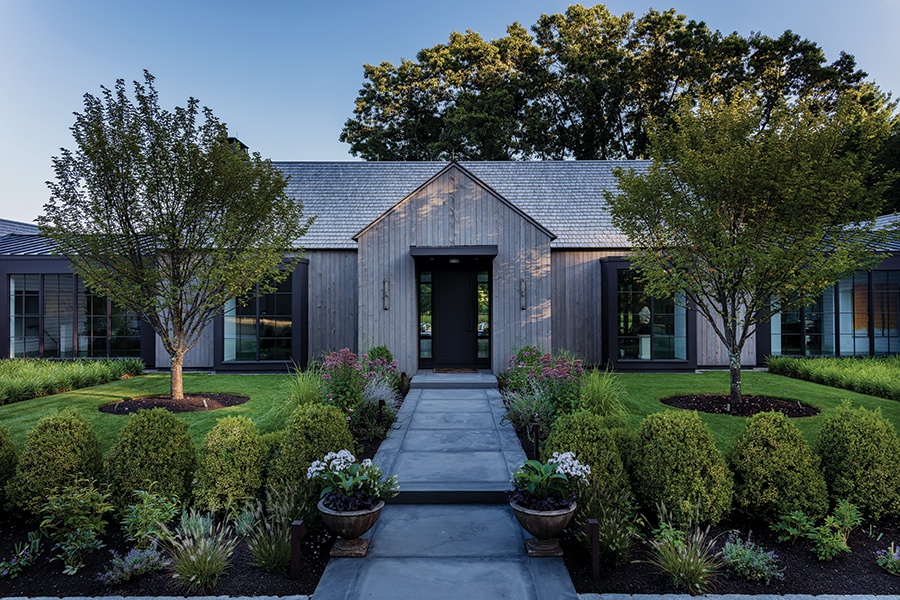 The pathway to the front door feels like “walking through a garden,” Levin says. / Photo by Michael J. Lee 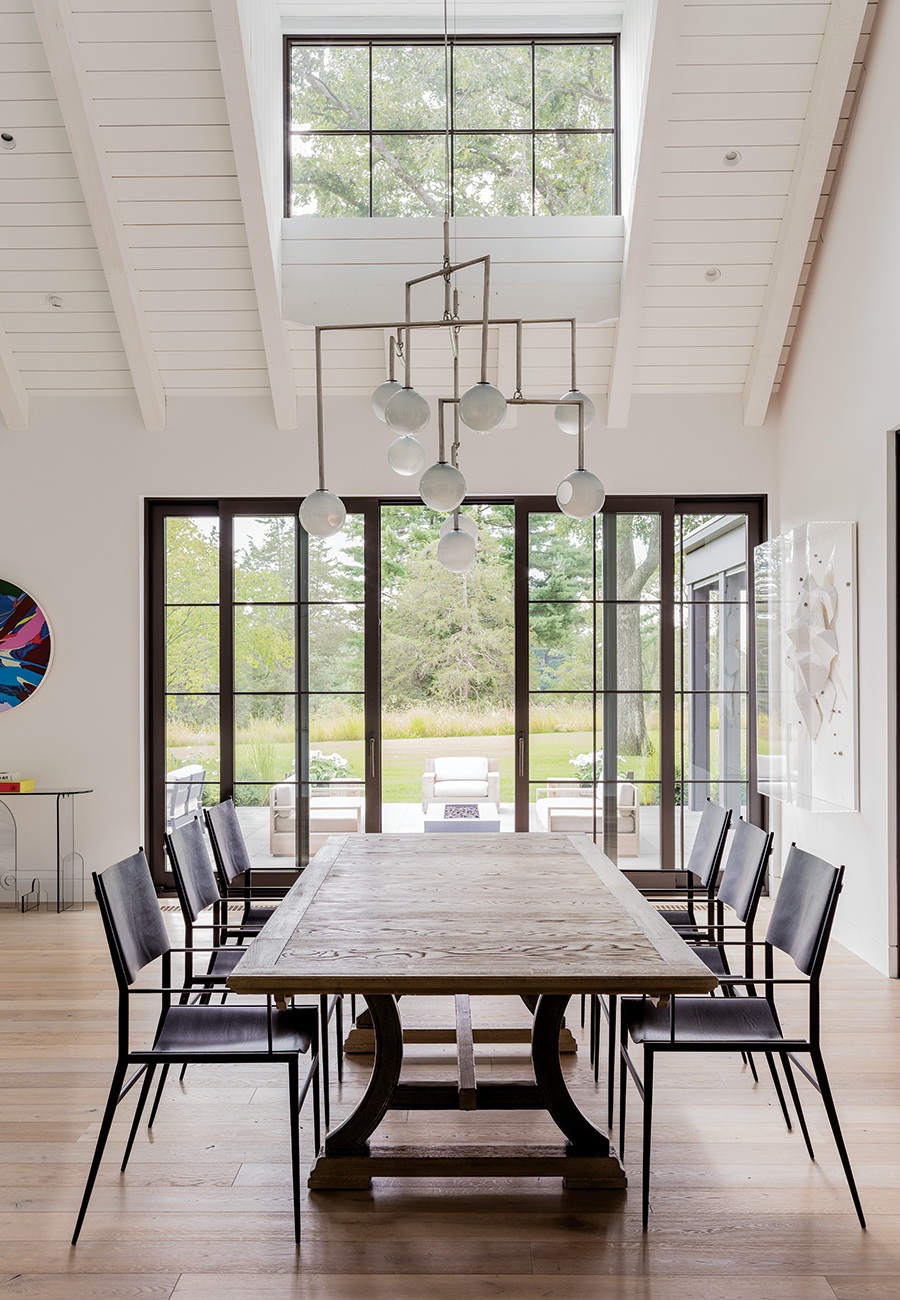 The dining room, accented by a custom pendant light from Jamie Harris Studio, comfortably seats up to 12 people. / Photo by Michael J. Lee 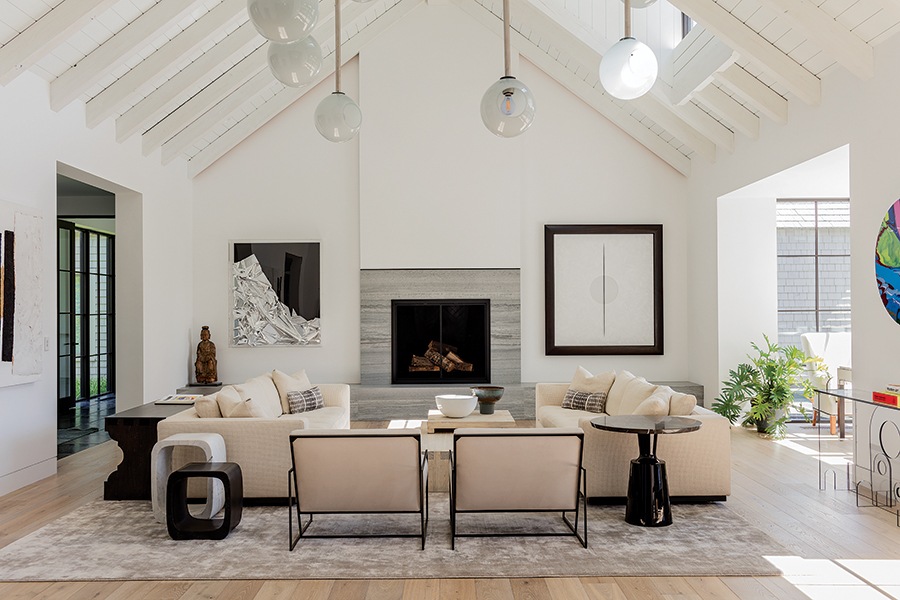 Light floods the living room through dormered windows and a glass bump-out. The team designed the honed marble surround to complement the artworks on either side. / Photo by Michael J. Lee

The Hutker team rose to the challenge: Their plans called for a sprawling, single-story dwelling facing south across the meadow toward town. At the center would be a barn-like structure housing the living and dining areas, with wings on either side for bedrooms and workspaces. “We were absolutely blown away” by those first drawings, the wife says. “It was so close to what we wanted.”

The resulting house stands delicately atop the meadow, which is dotted with lush trees. Upon entry, a gallery corridor spans the width of the central living space, offering plenty of real estate for paintings and sculptures. A combined living and dining room lies beyond, outfitted with vaulted ceilings and dormered windows that let in light. Sunshine also floods the adjacent kitchen, where—in the company of a large skylight and twin quartz-topped islands—the wife often hosts informal gatherings for family and friends. “I love to cook,” she says. 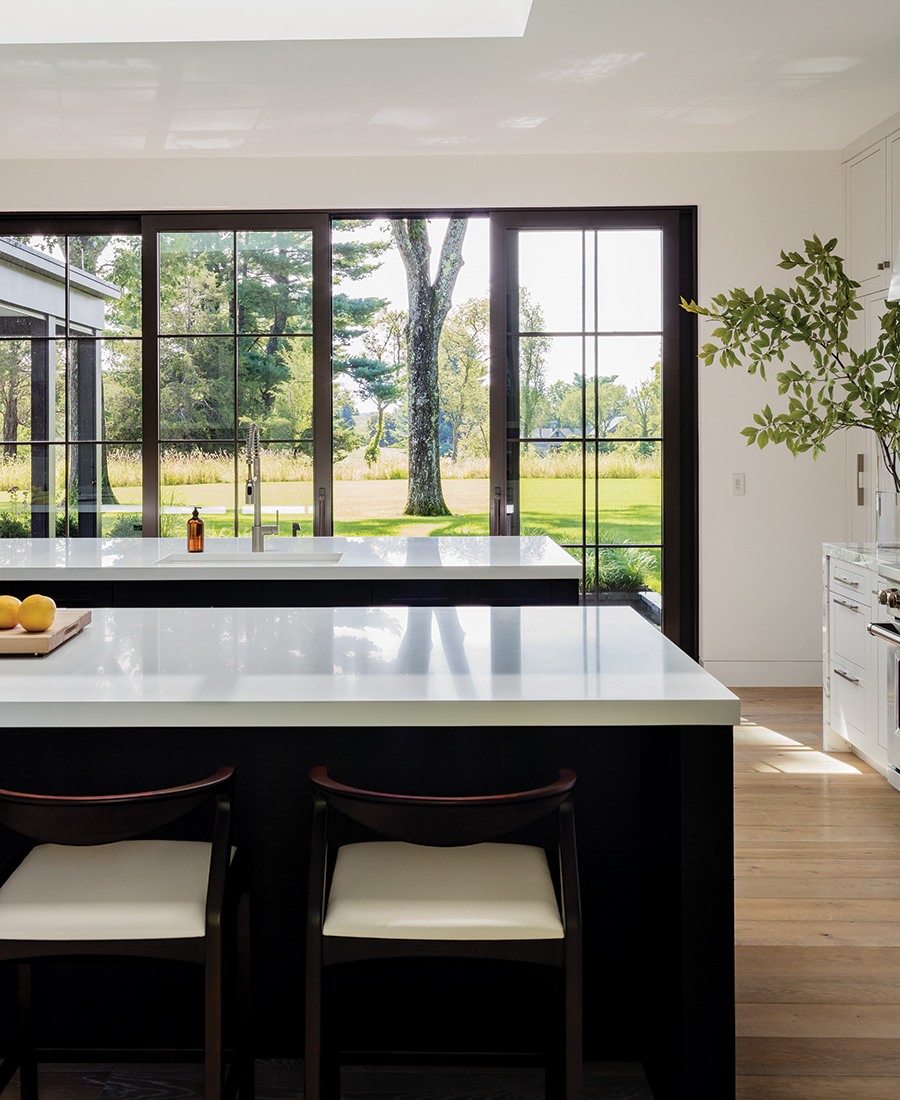 The kitchen’s sliding glass doors overlook the surrounding meadow, which stretches to a stone wall and a historical barn on an adjacent property. “It’s a very storied New England setting,” the wife says. / Photo by Michael J. Lee 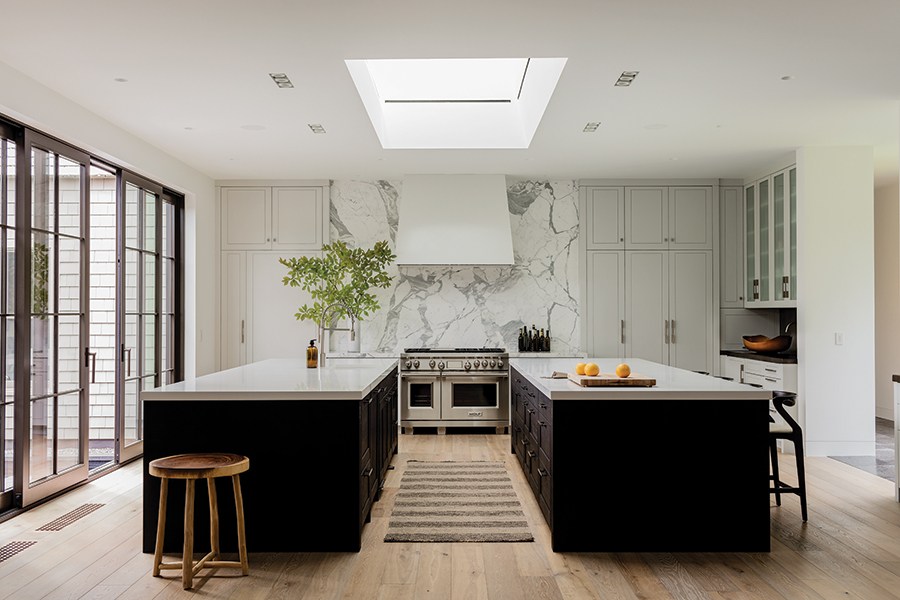 Parallel quartz-topped islands “invite our guests to be a part of what is going on in the kitchen,” says the wife, who loves to cook but didn’t want to feel trapped behind a big island while entertaining. She preps food on one island and offers tastings on the other. / Photo by Michael J. Lee 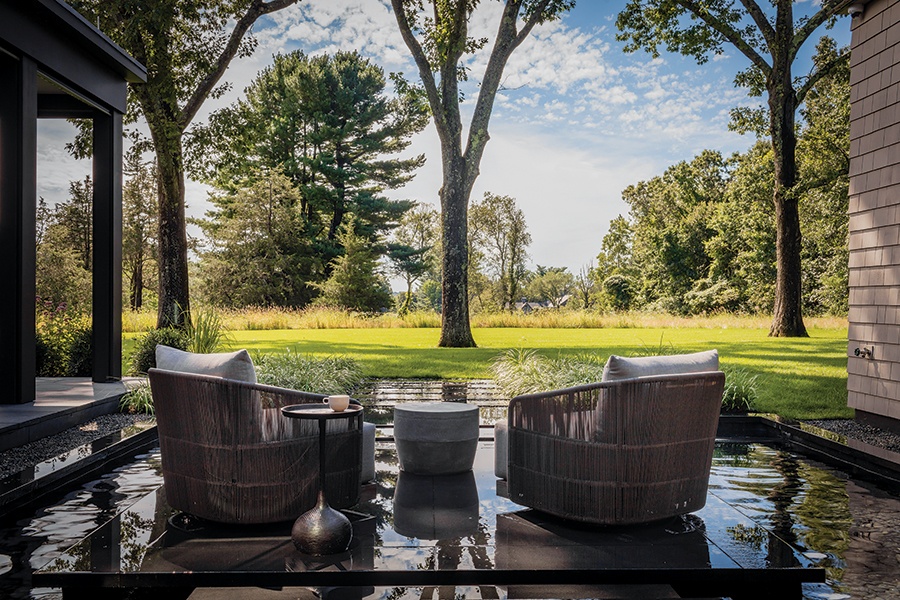 The design team oriented the building around three oak trees on the property. “We had to pivot the house to get this perfect frame,” associate Erin Levin says of the view from the reflecting pool. / Photo by Michael J. Lee

The kitchen comes with other perks, too. During the early planning stages, the wife told the Hutker team that she’d miss living on the ocean—specifically, the sound of lapping water—so the designers incorporated two reflecting pools into the scheme: one outside the kitchen and another outside the den off the living room. Now the family can open the kitchen’s sliding glass doors to listen to trickling water while preparing dinner. “[It’s] been phenomenal,” the wife says of the new space.

At the end of the day, the couple and their kids retire to opposite ends of the house to unwind before bedtime. The children’s wing is to the left of the main living area, just past the den. Each bedroom features an adjoining sitting room, which the kids got to personalize. Their teenage daughter chose to create a makeup room with a vanity area and lots of built-in cubbies, while their son, currently in college, requested a secret door between his bedroom and the sitting room “with a retinal eye scanner,” he added jokingly. Hutker’s compromise—a door disguised as a bookcase—hit the mark. 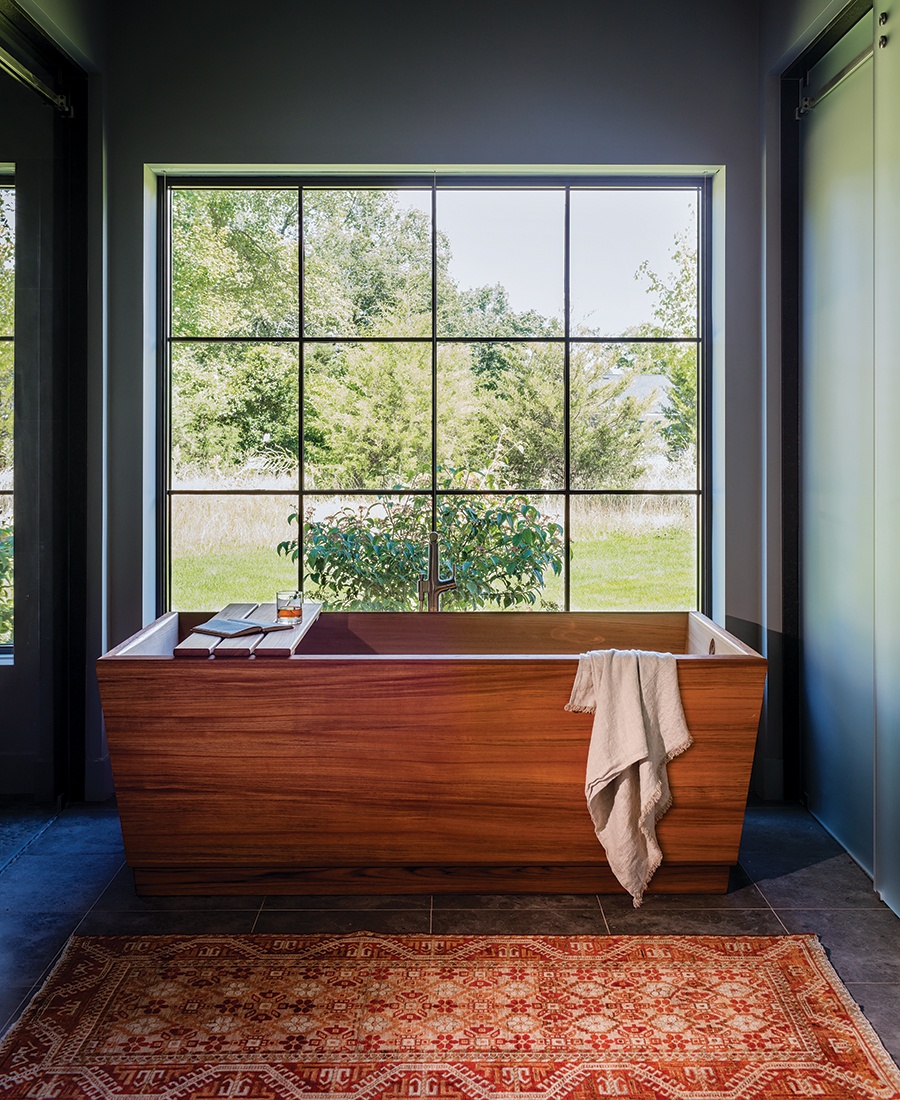 The couple’s son had an unusual request for his bathroom: a wooden bathtub. The Hutker team obliged with this Japanese-style soaking tub by Zen Bathworks. / Photo by Michael J. Lee 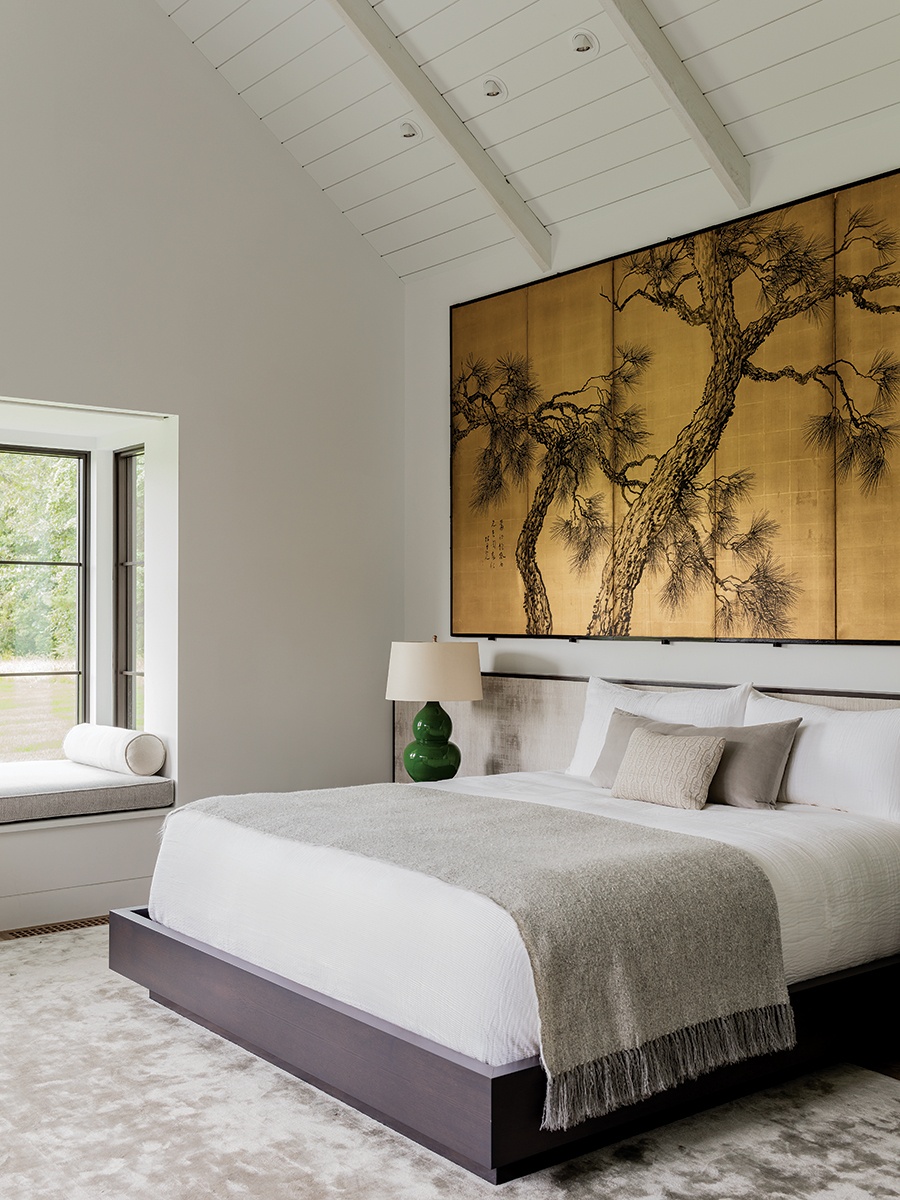 A multi-panel screen acquired from an antiques dealer in Japan hangs above the couple’s custom platform bed and upholstered headboard. / Photo by Michael J. Lee 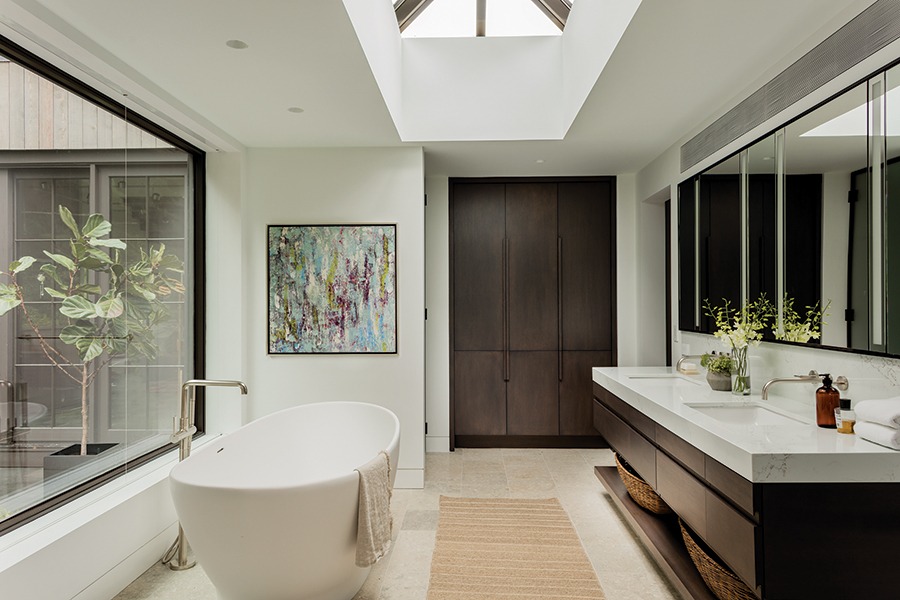 In the master bathroom, a large picture window next to the soaking tub by MTI Baths offers bathers a view of the garden. / Photo by Michael J. Lee 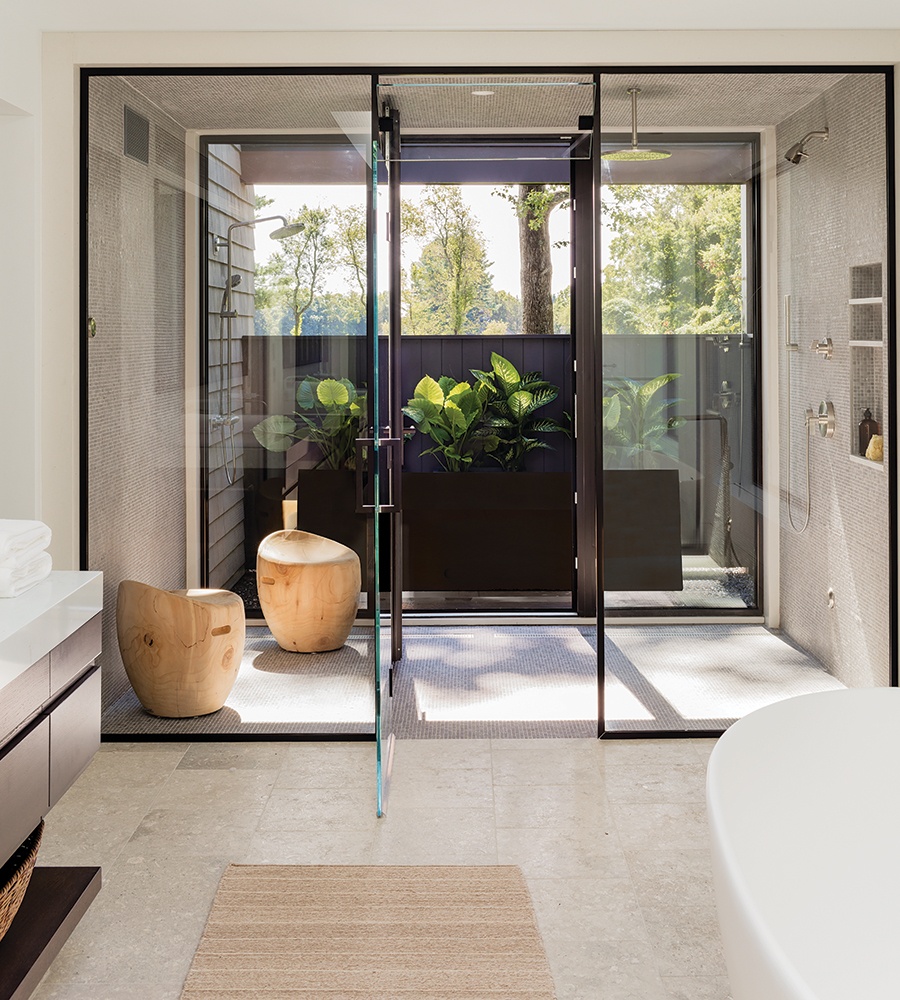 In the enclosed outdoor shower, located off the master bathroom, the height of the wooden wall provides privacy while allowing glimpses of the meadow and farm beyond. / Photo by Michael J. Lee

The couple’s master suite, meanwhile, sits on the other side of the living area, along with the garage, mudroom, an art studio, and two offices. The wife appreciates that she and her husband can “shrink the house” by closing the doors to the children’s wing when the kids aren’t home. “We wanted a house that would be comfortable for just the two of us or extended family and guests,” she says.

Reflecting on their new home, the clients say they’re thrilled with how it turned out. They’re especially enjoying all the space they have for displaying artwork, which they’re no longer forced to keep in storage. The couple speaks fondly of the building process, too: Despite the project’s tight time frame and an interstate move, the experience “wasn’t stressful,” the wife notes, thanks to the effort of everyone involved. In fact, she uses a phrase rarely called upon to describe such a multifaceted project: “It was a lot of fun,” she says. 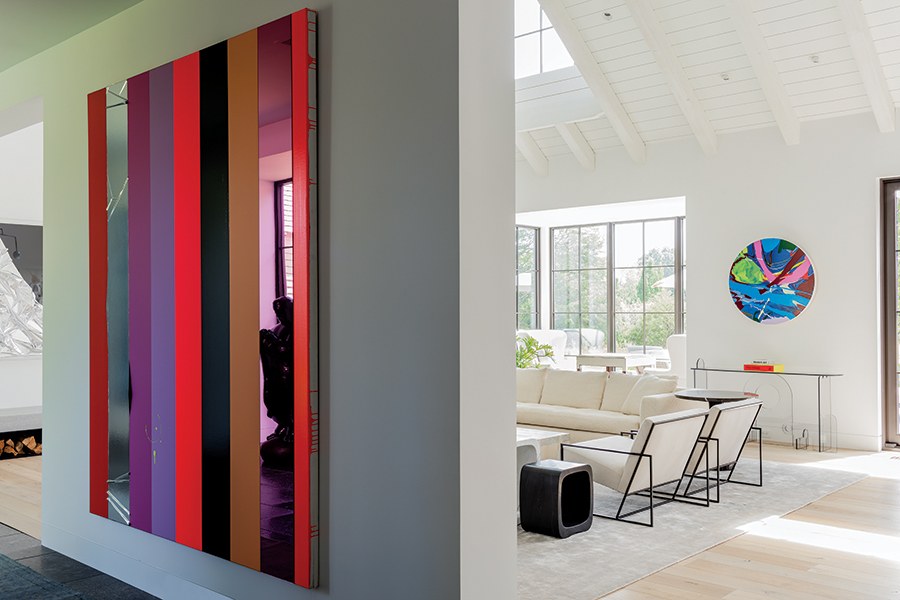 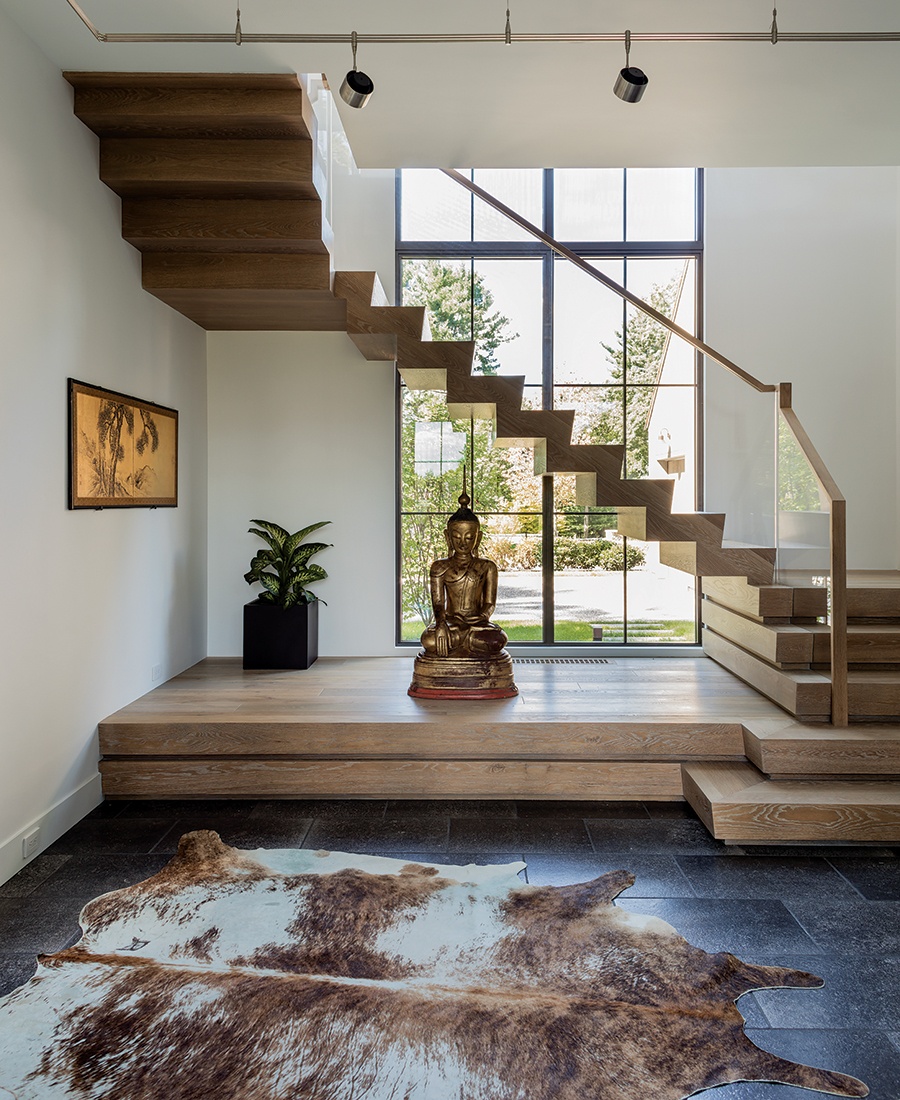 The home’s only two-story section includes an art studio and an office for the husband, accessed by a custom staircase with a glass railing. A seated Buddha in the studio serves as a “reminder to enjoy the process of creating” and “not to focus on the end result,” the wife says. / Photo by Michael J. Lee 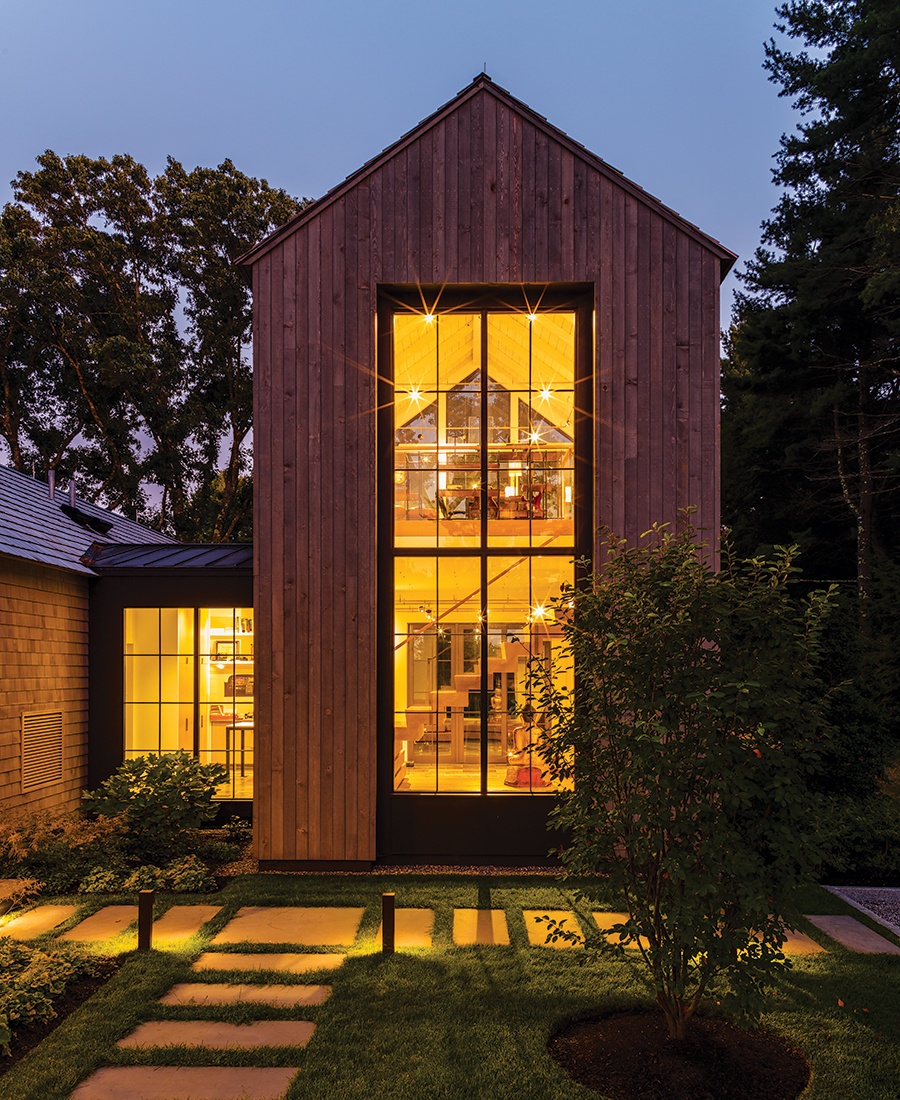 Giant windows on either side of the art studio and second-floor office help connect the spaces to the outdoors. / Photo by Michael J. Lee 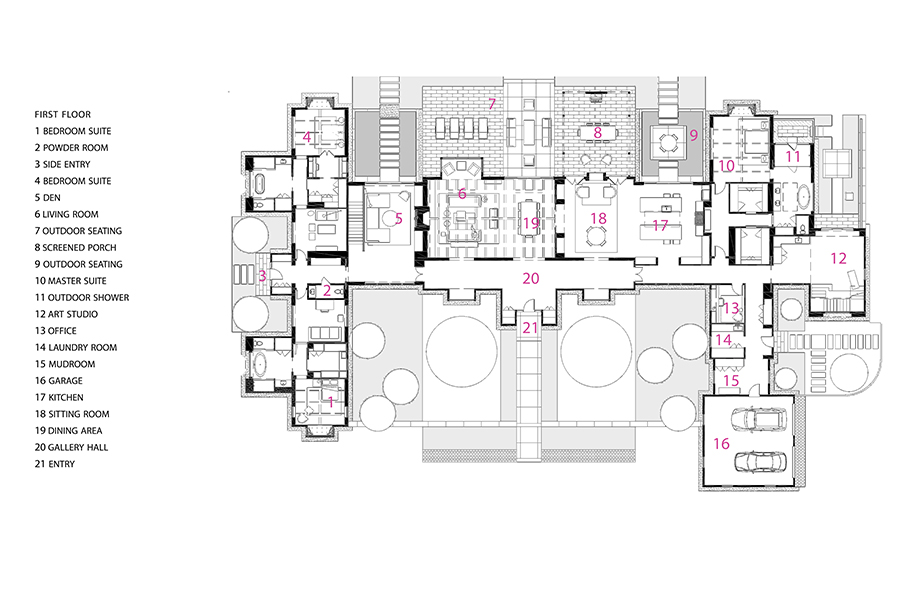