Designed by Jill Neubauer Architects, the glassy Brewster abode puts all eyes on the landscape. 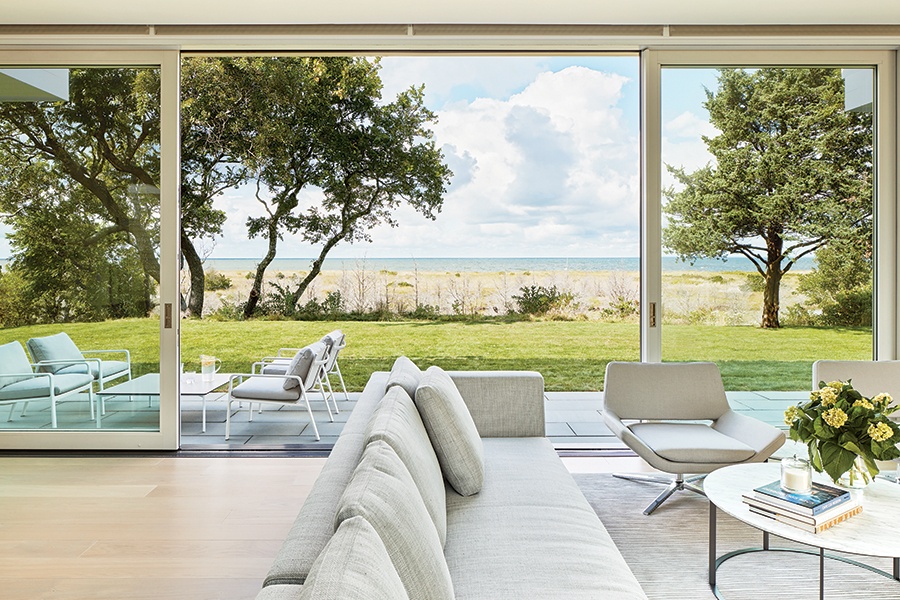 The neutral-hued living area encompasses a B & B Italia sofa and armchairs, as well as a Paola Lenti rug. / Photo by Jane Messinger / Styling by Courtney Goodrich

After years of waking up at the crack of dawn, trekking down to the Cape from their home in Dover, and then cleaning up in public restrooms after a day of lounging in the sand, this couple decided it was time to have their own place by the sea. They wanted to build new, and began their hunt for a beachfront property that would serve as a peaceful weekend retreat from their demanding careers as lawyers. That search stretched on for a little over a decade until they came upon a gem in Brewster. To the north of the property was Paines Creek Beach, a low-traffic shoreline known for its jaw-dropping sunsets over Cape Cod Bay. To the south: a small pond surrounded by marshland. “It was an incredibly special site for the view and the privacy,” the husband explains. “I said to my wife, ‘We’ve got to nail this down today.’”

When architect Jill Neubauer—whom the pair called upon to design their coastal oasis—first visited the site, she instantly recognized how remarkable it was. “It’s a very beautiful, colorful, changing landscape,” she says. However, the property came with a challenge: Due to natural-resource regulations imposed by Brewster’s Conservation Commission, the footprint of the new home would have to fall within the outline of the site’s existing house and driveway. 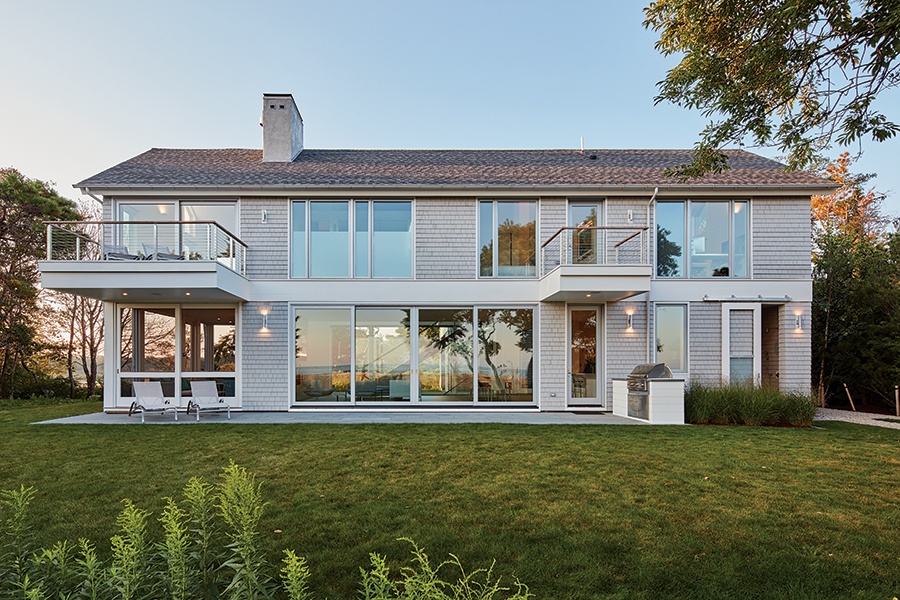 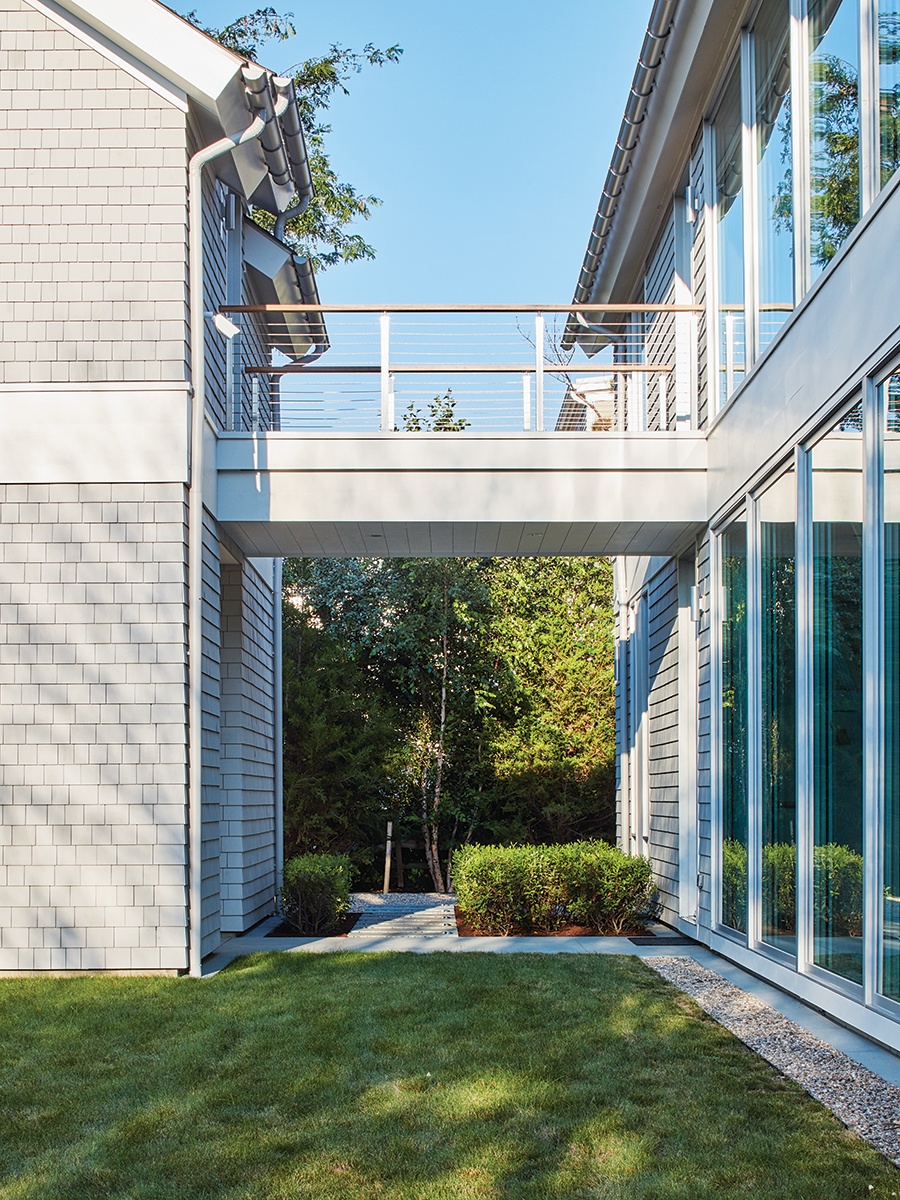 A bridge connects the main house and the carport. / Photo by Jane Messinger / Styling by Courtney Goodrich 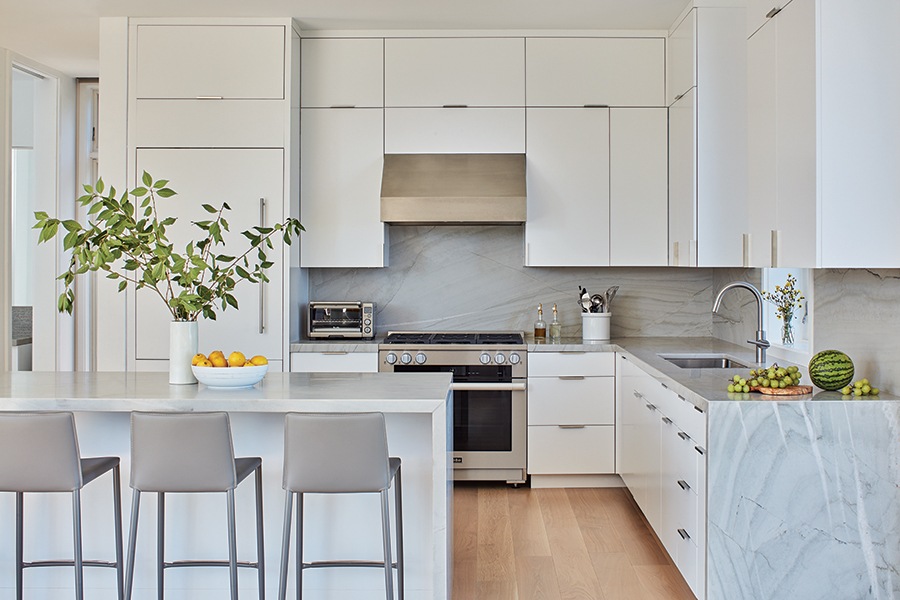 The kitchen holds a horde of Thermador, Miele, and Bosch appliances. / Photo by Jane Messinger / Styling by Courtney Goodrich 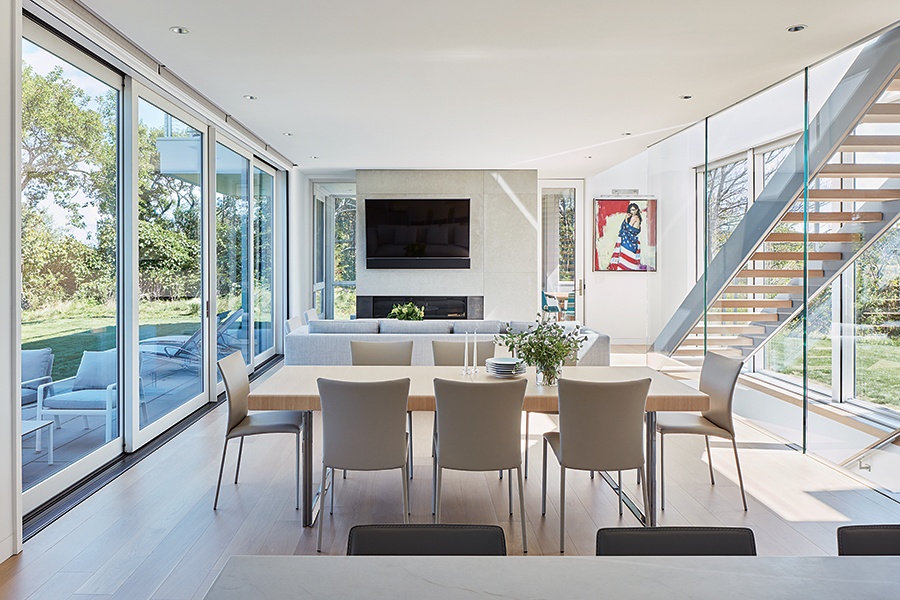 In the dining area, Draenert leather chairs surround an “Athos ’12” table from B & B Italia. / Photo by Jane Messinger / Styling by Courtney Goodrich

So the architect began brainstorming, ultimately coming up with plans for a rectangular, 3,556-square-foot structure. To create an additional living space without expanding out of bounds, Neubauer also designed a new two-story carport for the driveway, envisioning its second floor as a 484-square-foot TV room connected to the main house by a suspended bridge. As for interiors, the team—which included former Montage designer Lauren Hamilton—would honor the couple’s wish for a minimalist home that showcased the beachy property.

That ethos permeates every corner of the finished house, which reads like a love letter to the oceanfront locale. The main entrance opens to a combined kitchen, living, and dining room, filled with natural light. Here, the kitchen’s green-gray quartzite backsplash and countertops evoke the colors of the surrounding beach and marshland, while furnishings including simple cabinetry and Scavolini barstools keep the focus on the scenery. The team’s finish selections help, too. The walls, trim, and ceiling: all white. The floors: white oak. And on the north and south sides of the living area, Neubauer incorporated 9-foot-tall glass panels, two of which slide open to a beach-facing terrace. “It was all about not having anything in the house that said, ‘Oh, look at me,’” Neubauer explains. “[The priority was] the landscape.” 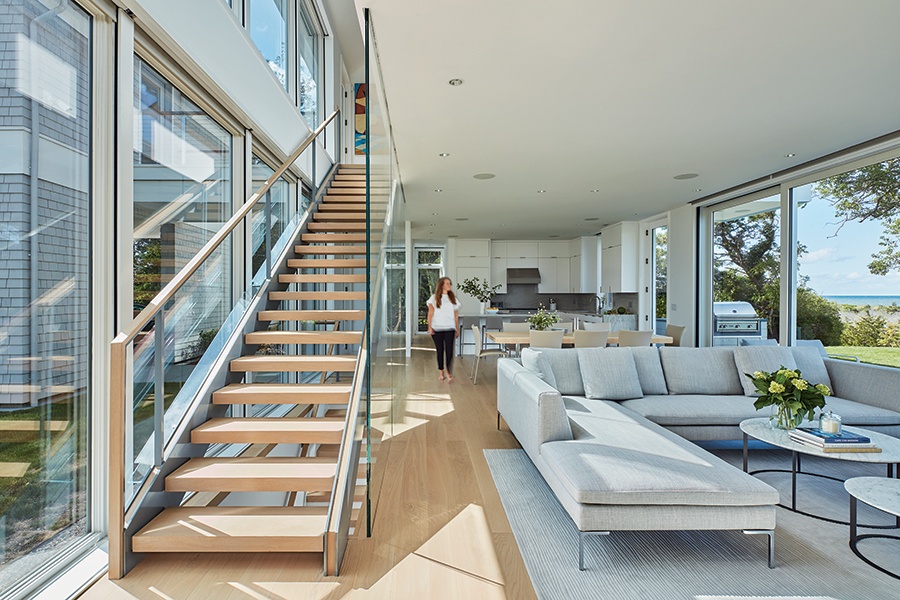 “I don’t like staircases because I don’t think [they’re] particularly pretty,” says the husband, who originally suggested they hide the stairs. Due to the floorplan, however, tucking them away couldn’t be done. Instead, Neubauer made the staircase a showpiece by incorporating heavy glass panels on either side. / Photo by Jane Messinger / Styling by Courtney Goodrich 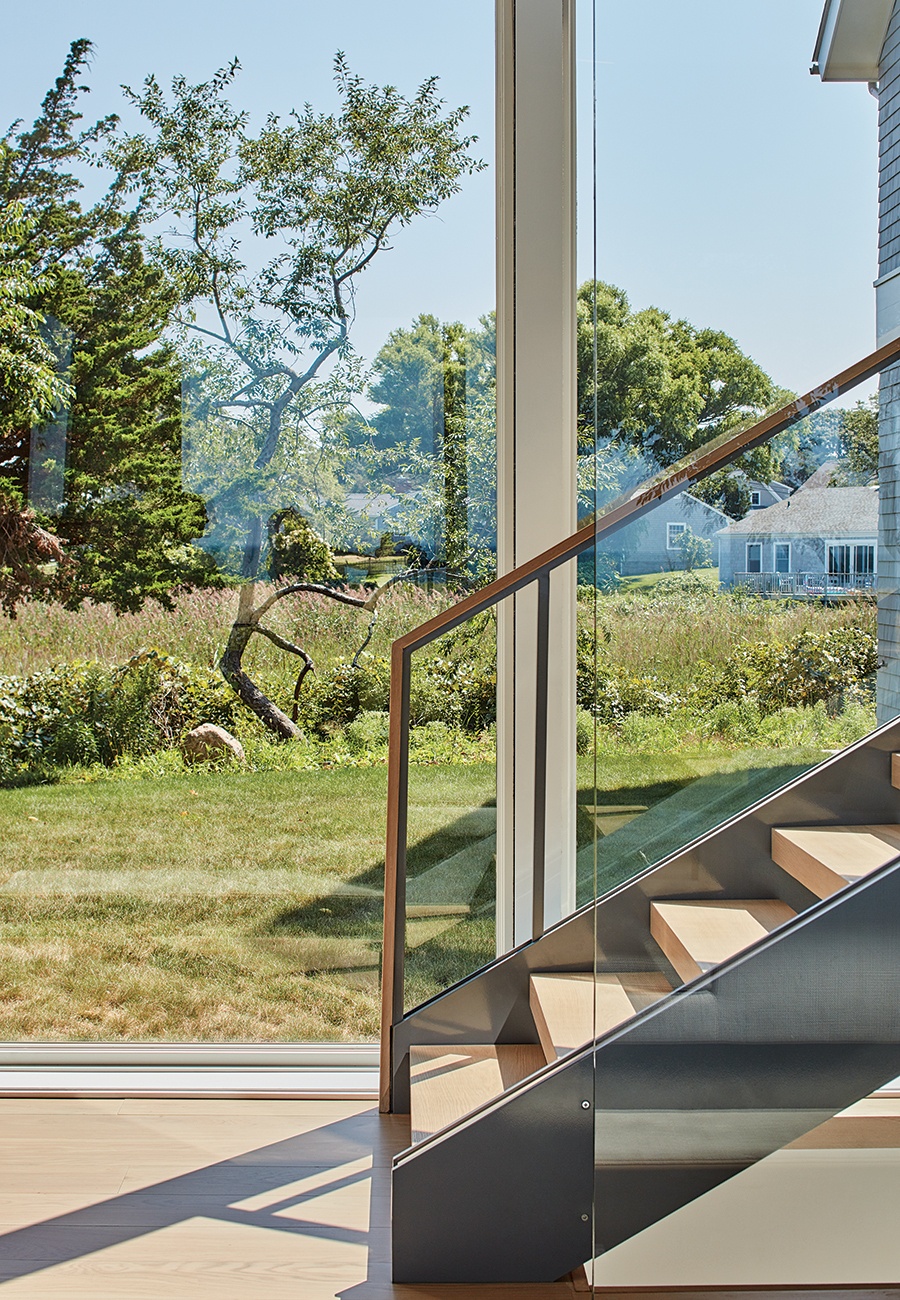 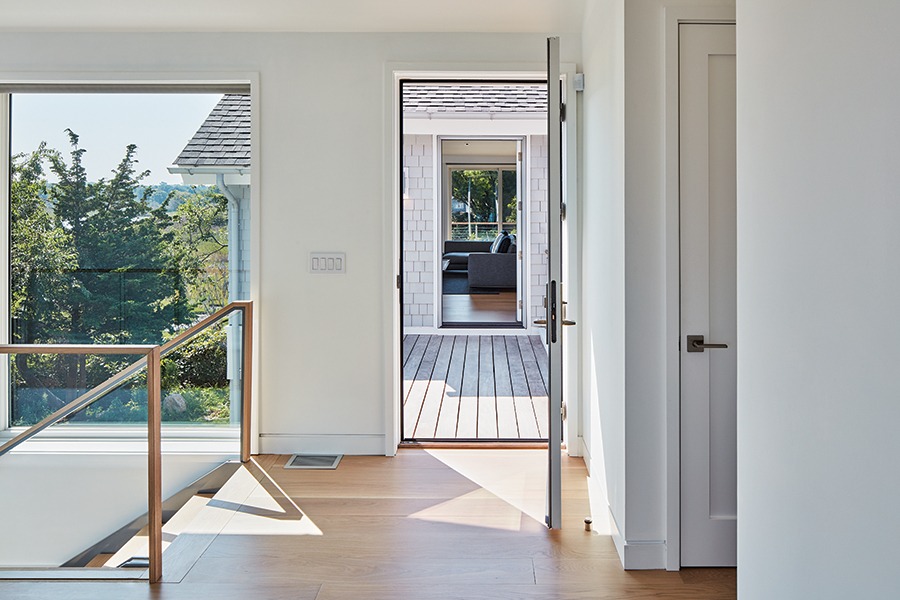 Neubauer opted to leave the bridge to the carport uncovered. “I like it when clients go outside between some spaces,” she says. “It’s a little bit of an adventure, even if it’s just [for a few] feet.” / Photo by Jane Messinger / Styling by Courtney Goodrich 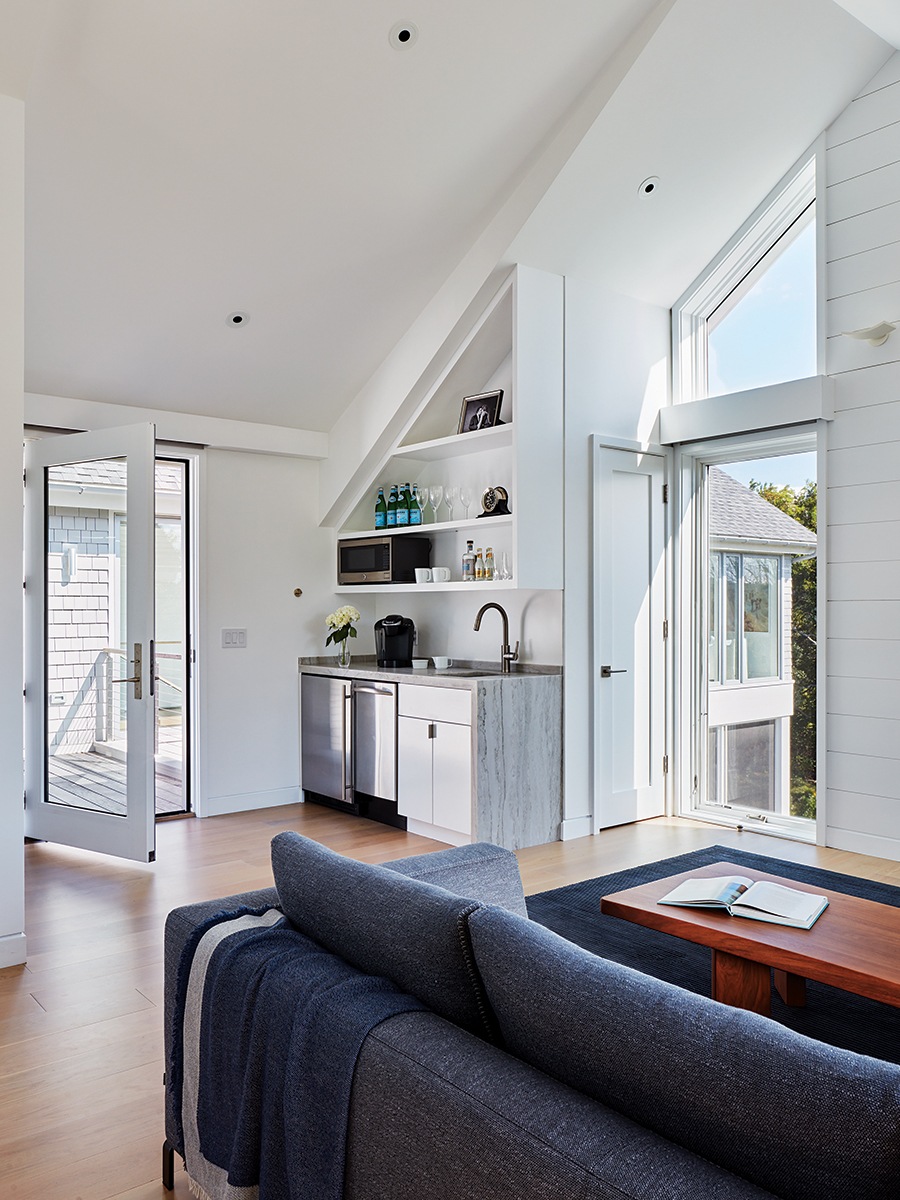 A wet bar featuring a dishwasher, an under-counter refrigerator, a countertop microwave, and a coffeemaker in the TV room, accessed by the bridge, allows the couple to hunker down while watching a film. / Photo by Jane Messinger / Styling by Courtney Goodrich

The pared-down trend continues on the second floor, accessed by a white-oak staircase near the front door. At the top of the stairs, a door on the left leads to the bridge that connects the house to the carport, where the second-floor TV room doubles as a guest bedroom. To provide a sense of shelter and coziness, the space features fewer windows than most of the rooms in the main house. It also takes a step back from the home’s strictly neutral palette with a navy Paola Lenti rug and a blue-gray B & B Italia sofa.

Back across the bridge to the main house, another stretch of windows spans the length of the hallway, beckoning down toward the master suite. Like the living area below, the space—the couple’s favorite in the house—boasts floor-to-ceiling glass on two sides, giving the room a floating effect. Off to one side of the bed, anchored by a shiplap wall, a private deck overlooks the beach. On the other side, two plush “Ghost” armchairs from Gervasoni play up the room’s ethereal aesthetic. A Michael Carson oil painting of a pier in California, which the husband chose for its muted palette, hangs above. A perfect match for the scenery outside, the painting harks back to the couple’s original vision—and the resulting house that they so love. “[The home] is at balance with nature and itself,” Neubauer says. “It’s peaceful and tranquil, and the beauty of the landscape just settles over the whole place.” 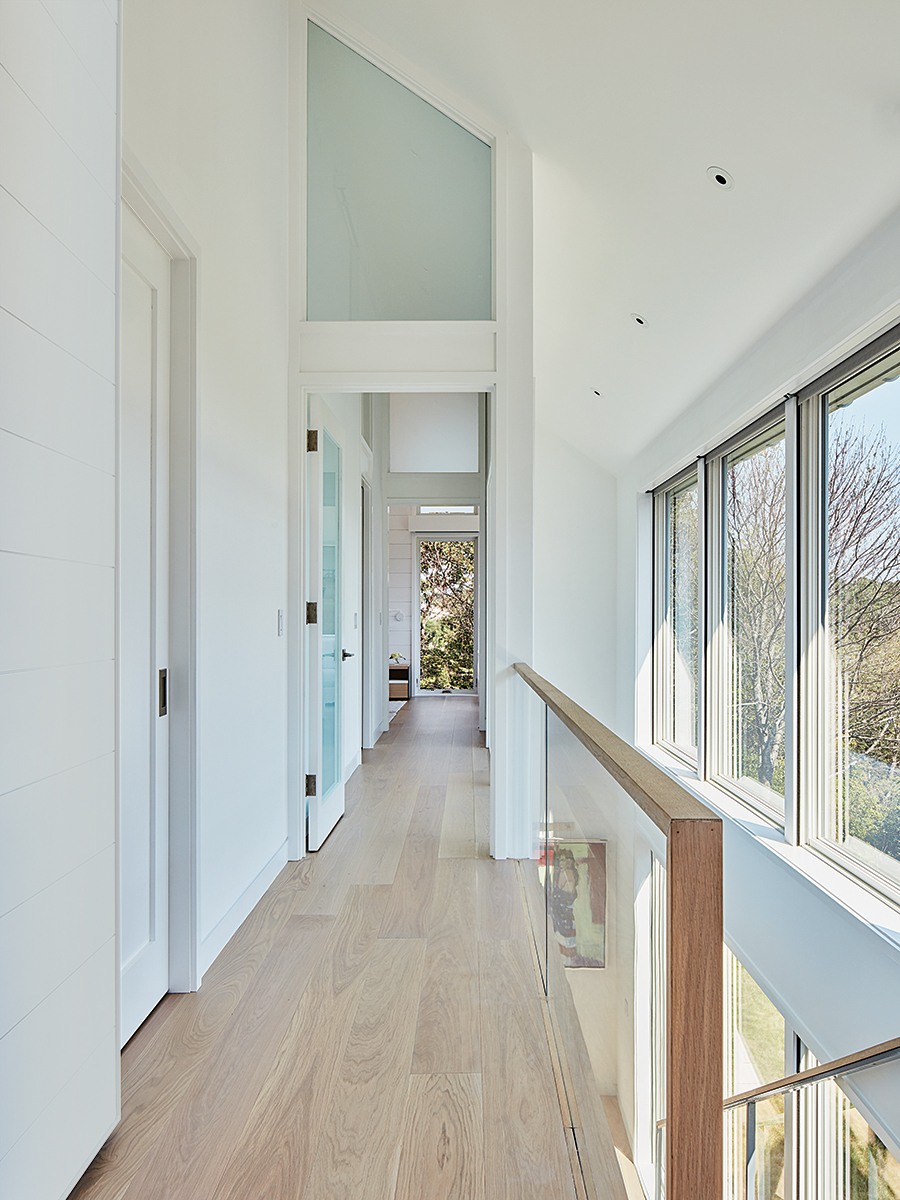 Light spills out into the hall from three rooms, where windows and doorways are precisely aligned. / Photo by Jane Messinger / Styling by Courtney Goodrich 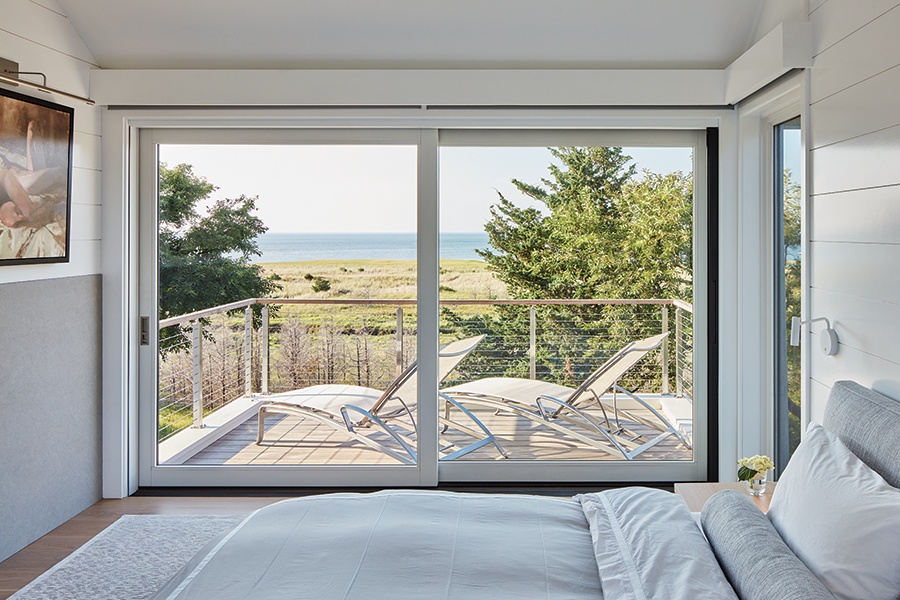 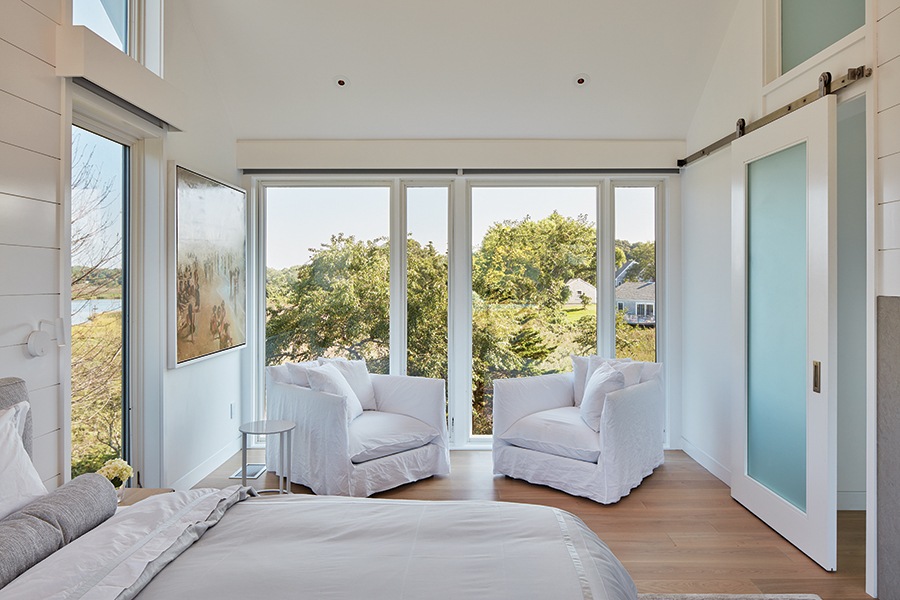 Floor-to-ceiling windows on the room’s other side boast marshland vistas. / Photo by Jane Messinger / Styling by Courtney Goodrich 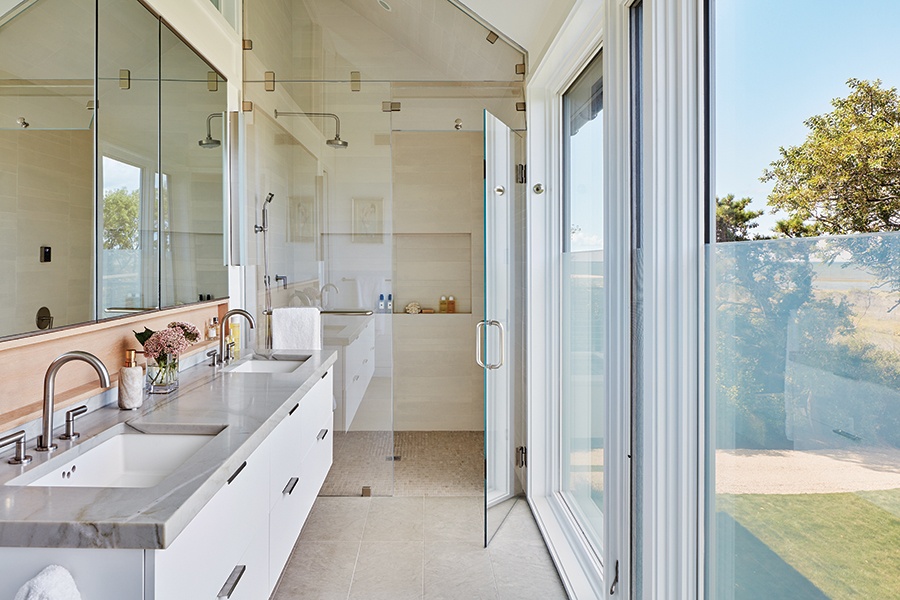 To ensure privacy in the beach-facing master bathroom without compromising views, Neubauer brought in a piece of cutting-edge technology: “smart glass” windows, which utilize an ionized, electrically charged film. Simply flip a switch, and the film appears from shoulder-height downward, creating a frosted effect on the glass. / Photo by Jane Messinger / Styling by Courtney Goodrich 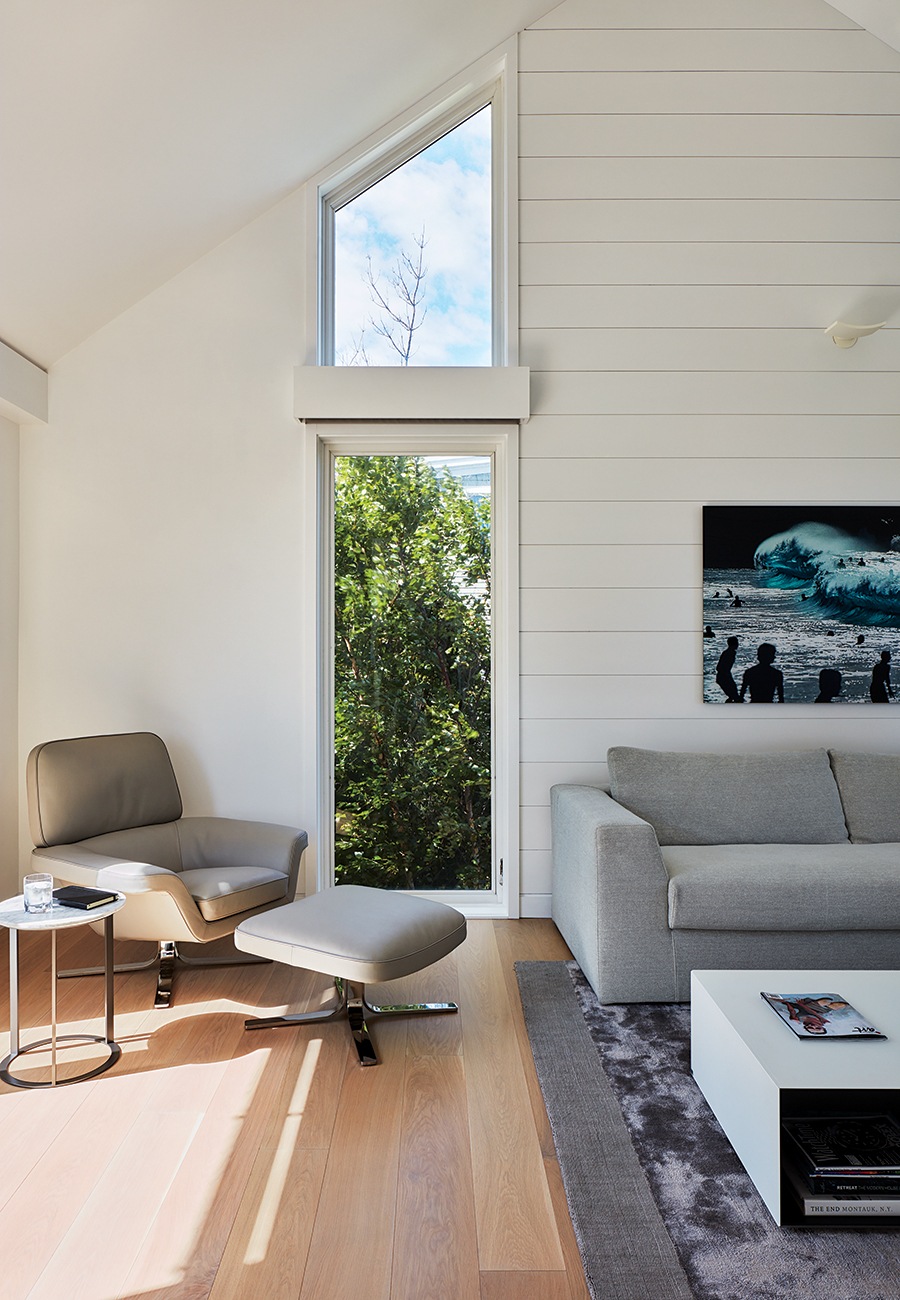 Down the hall from the master bedroom, the office holds a Minotti armchair, a Glas Italia coffee table, and a Meridiani pull-out sofa. / Photo by Jane Messinger / Styling by Courtney Goodrich 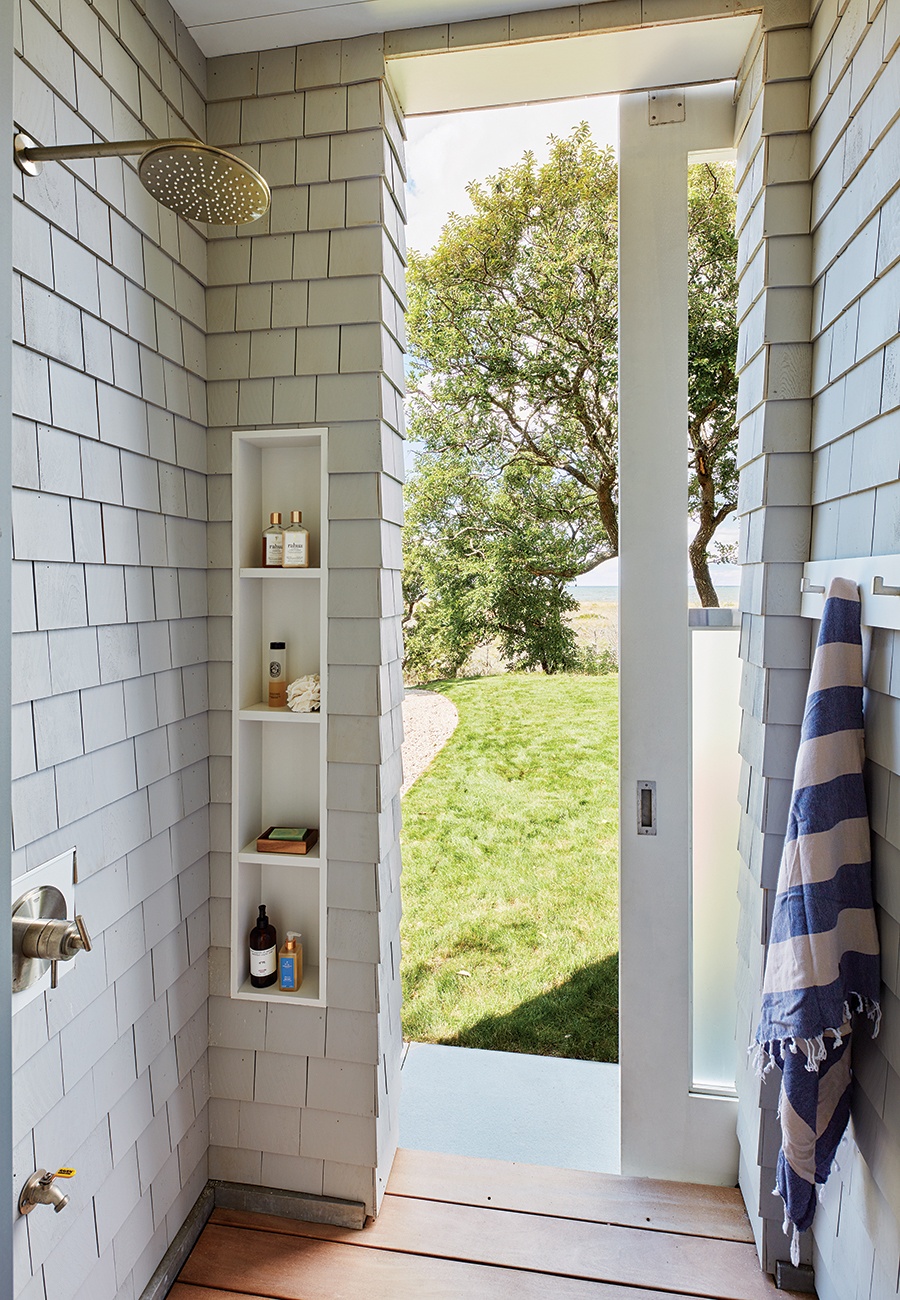 The rinsing station couldn’t sit outside of the house due to permitting restrictions; instead, Neubauer designed a shingled outdoor shower within the home’s footprint, adding doors to the yard and the mudroom on either side. / Photo by Jane Messinger / Styling by Courtney Goodrich 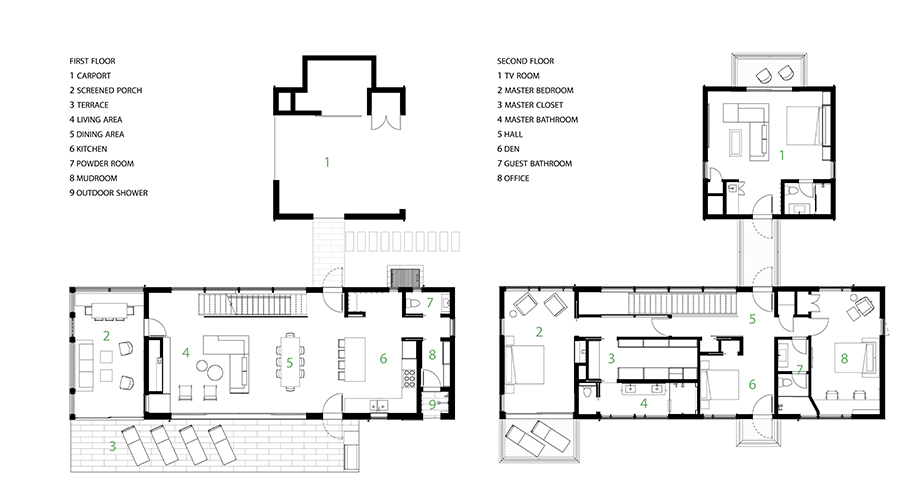