Elizabeth Benotti shapes blocks of clay into textured homewares in her Maine-based studio. 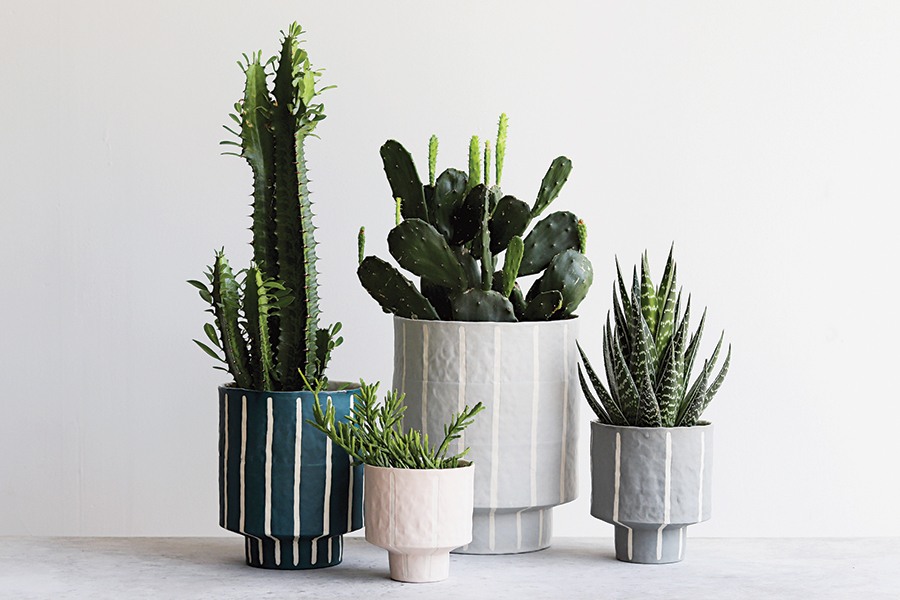 Benotti’s “Pinstripe” planters come in a variety of sizes and colors. “I love seeing my work in sets,” she says. / Courtesy photo

After tying her apron in a bow behind her back, Elizabeth Benotti picks up a rolling pin from a dusty wooden table. A metal whisk, a wooden spoon, and cookie cutters lie nearby. While these tools are typically used for whipping up sweets, Benotti is no baker: She’s a ceramicist, based in Eliot, Maine. She begins smoothing out a wedge of clay, which will later become the base of a planter branded with the Elizabeth Benotti Ceramics logo. It’s clear that inside this 2,100-square-foot studio—lined with unfinished mugs, trays, and bowls—the Massachusetts native feels at ease. “I’m not good with my words,” she says. “That’s why I make things with my hands.”

Benotti first discovered her affinity for ceramics inside the pottery studio at the University of Colorado Boulder. “I didn’t love drawing and didn’t think of myself as a two-dimensional artist,” she says. “When I got to build something [with clay], that felt intuitive.” But after graduating in 2007, she still hadn’t found her niche within ceramics. So Benotti packed her bags and headed west to attend an artist residency program in California. Crafting functional pieces such as dinner plates was “frowned upon” there, she says, so she built installations instead. Eventually, though, her passion for kitchenware won. “I love cooking, so it made sense to make dishes [to] enjoy in the kitchen,” the ceramicist says. “Those pieces are a part of everyday life, so why not [make them] beautiful?” 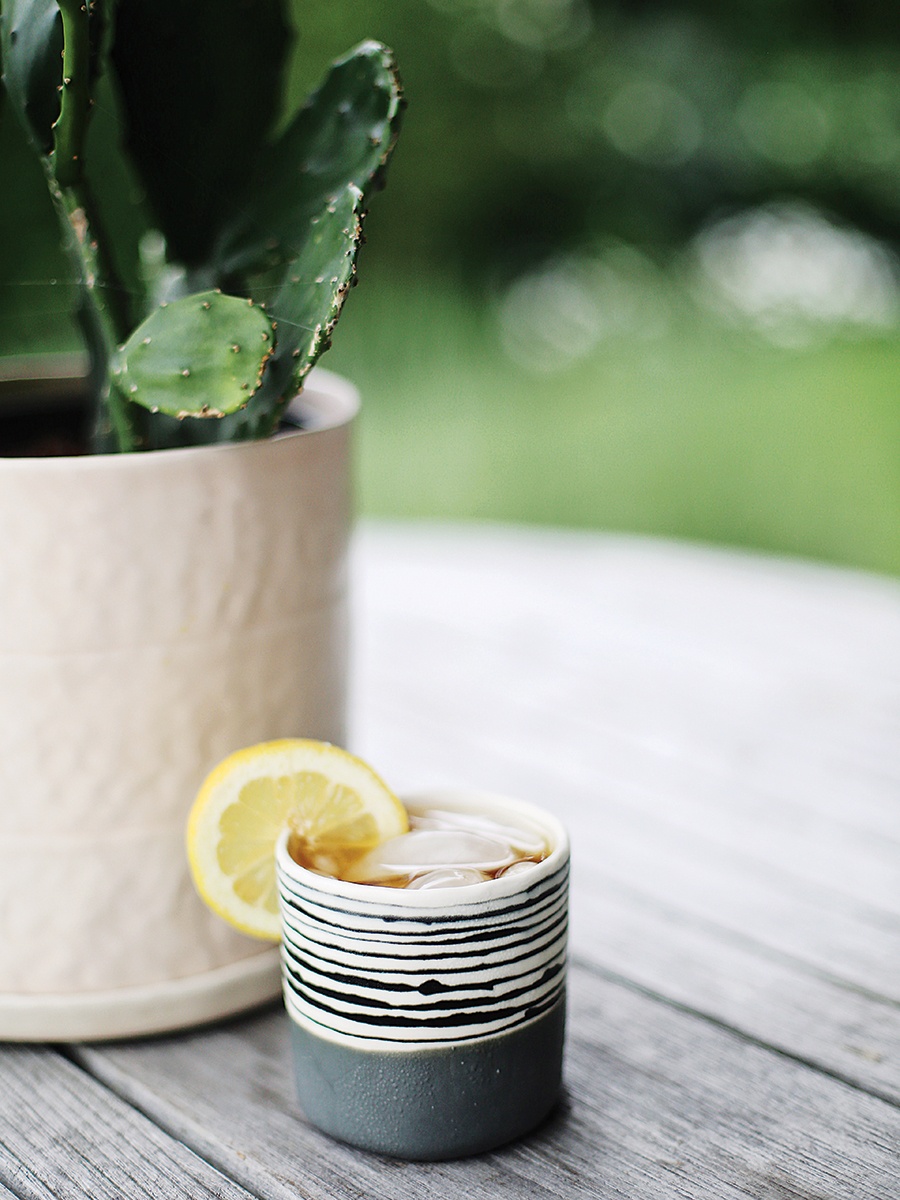 While her time in California has influenced her style, Benotti says, “I’m East Coast at heart.” / Photo by Coastline Creatives 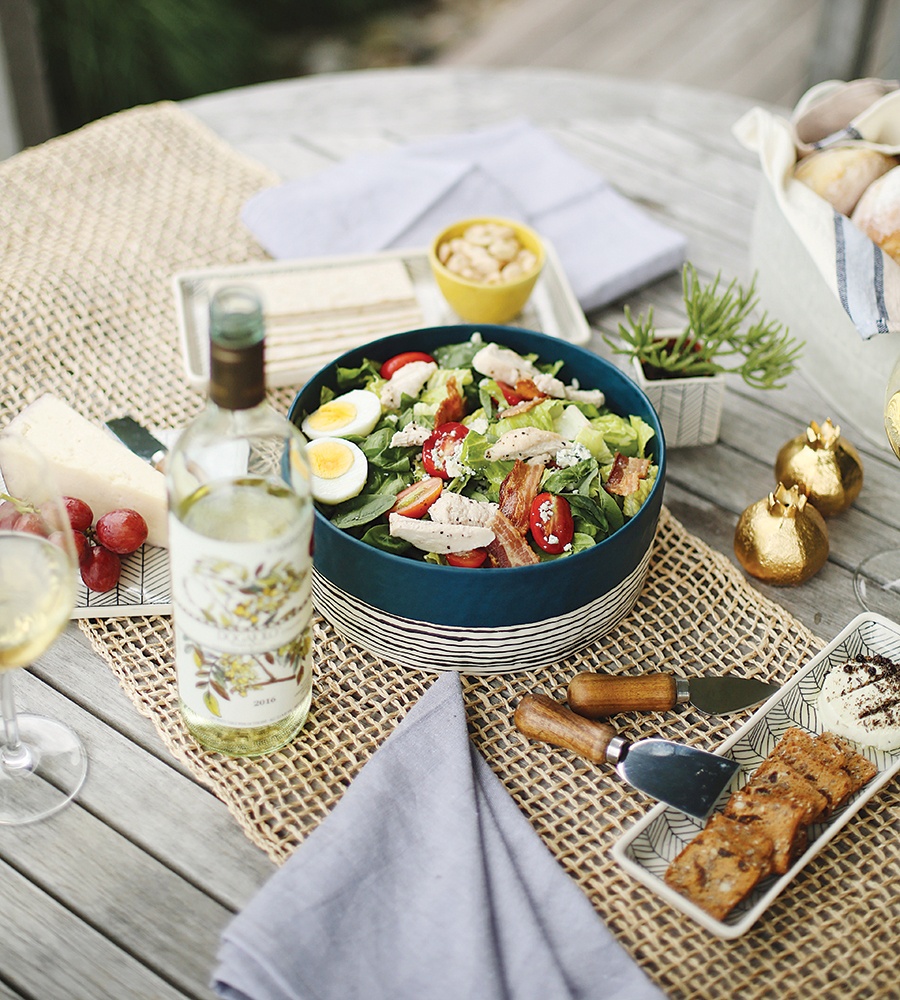 “I personally find joy in the dishes that I use every day,” she says. / Photo by Coastline Creatives 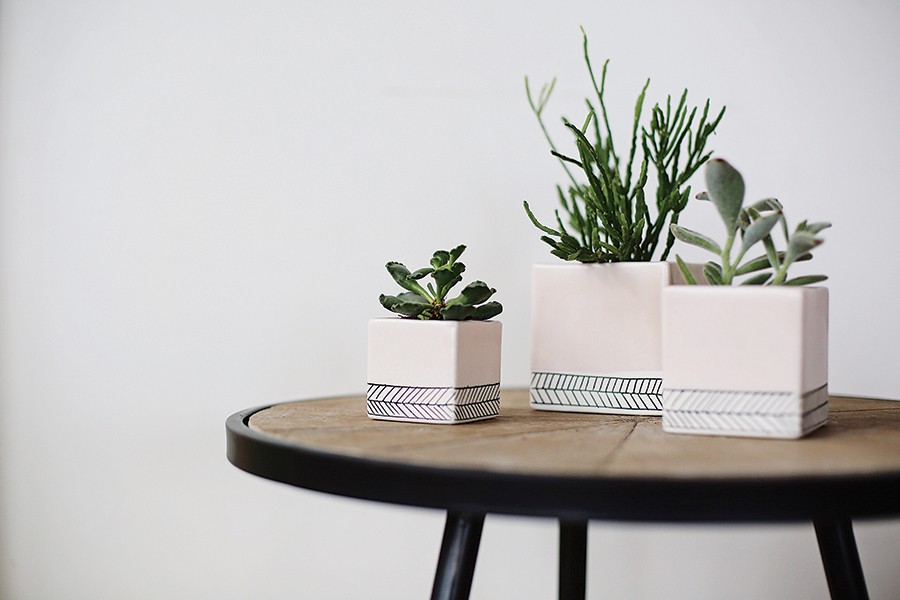 Benotti’s interest in creating planters stems from years of working as a gardener. As for the motivation behind her colors and patterns? “It’s simple,” she says. “[I’m] always inspired by what’s around [me].” / Photo by Coastline Creatives 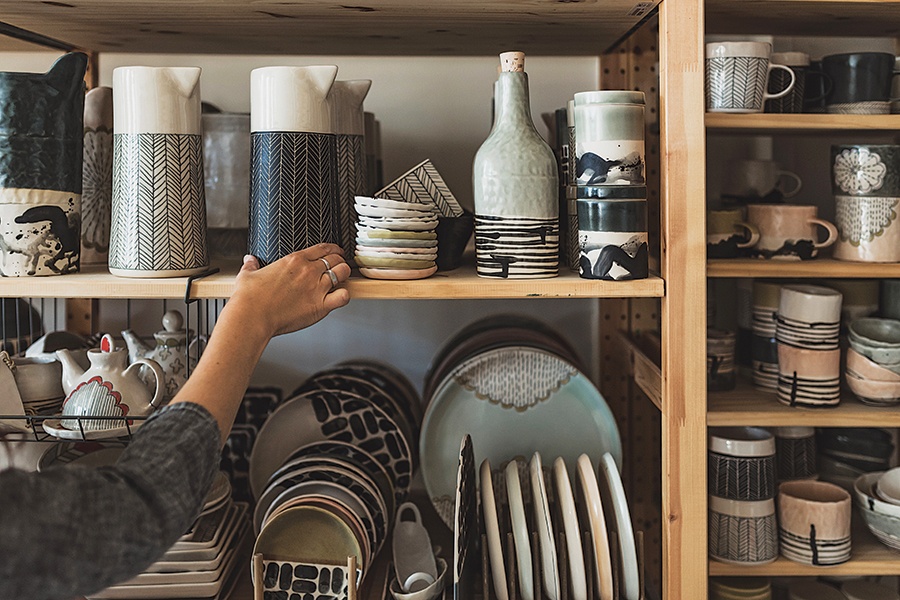 The ceramicist stocks the shelves in her Maine studio with pitchers, vases, plates, mugs, and other wares, which she’ll later display at craft fairs, including the SoWa markets in Boston. / Photo by Asher Oak

With a newfound purpose, Benotti became serious about selling her pieces. She moved back to Massachusetts, worked as a gardener during the day, and fired up her kiln in her parents’ basement at night. In 2011, she displayed plates, teacups, and mugs at SoWa markets. To her relief, customers were drawn to her clean aesthetic. When she introduced planters to her collection soon after, her business grew exponentially. Two years later, retailers took notice of Benotti’s work and asked if she’d fulfill wholesale orders. She said, “Yes,” and never looked back: Today, wholesale accounts for 70 percent of her business, with her goods stocked in dozens of stores, including Anthropologie.

To keep up with these orders, Benotti typically uses a method called slip casting, which minimizes the strain on her wrists and hands. This involves filling a plaster mold with house-made slip, or liquid clay. But before that process can begin, Benotti hand-builds a prototype for each piece, which (spoiler alert) takes many attempts to perfect. These days, she’s playing around with art deco–inspired planters for her new “Pinstripe” collection. “You can’t force [creativity]. It has to happen naturally,” she says.

To make a planter, Benotti starts with a block of clay. After using a rolling pin and cookie cutters to form the base, she moves the piece to a banding wheel, spinning it with one hand and manipulating the clay with the other to create a foot. Next comes the body of the planter. Benotti loads an extruder (imagine a garlic press, only bigger, she says) and pushes her weight into its lever until a ribbon of clay squeezes out of the bottom. To attach this piece to the base, she dabs the rim of the base with “magic water” (a concoction of water, soda ash, and sodium silicate), scores the edges, and carefully wraps the ribbon around it. Then, Benotti pinches the clay with her fingers to add texture before letting it dry. Just before that piece becomes “leather-hard,” she repeats the steps to add another ribbon, building upward. The key to this process, Benotti maintains, is patience. “When you’re making anything with clay, it’s all about timing,” she says. “Clay has different properties at different stages.” 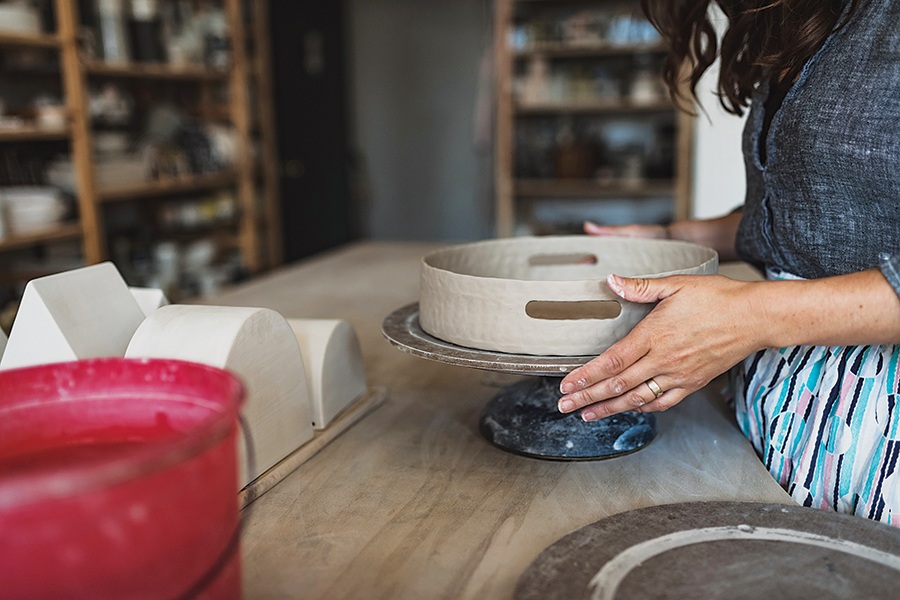 The ceramicist inspects the shape of a tray before it dries. / Photo by Asher Oak 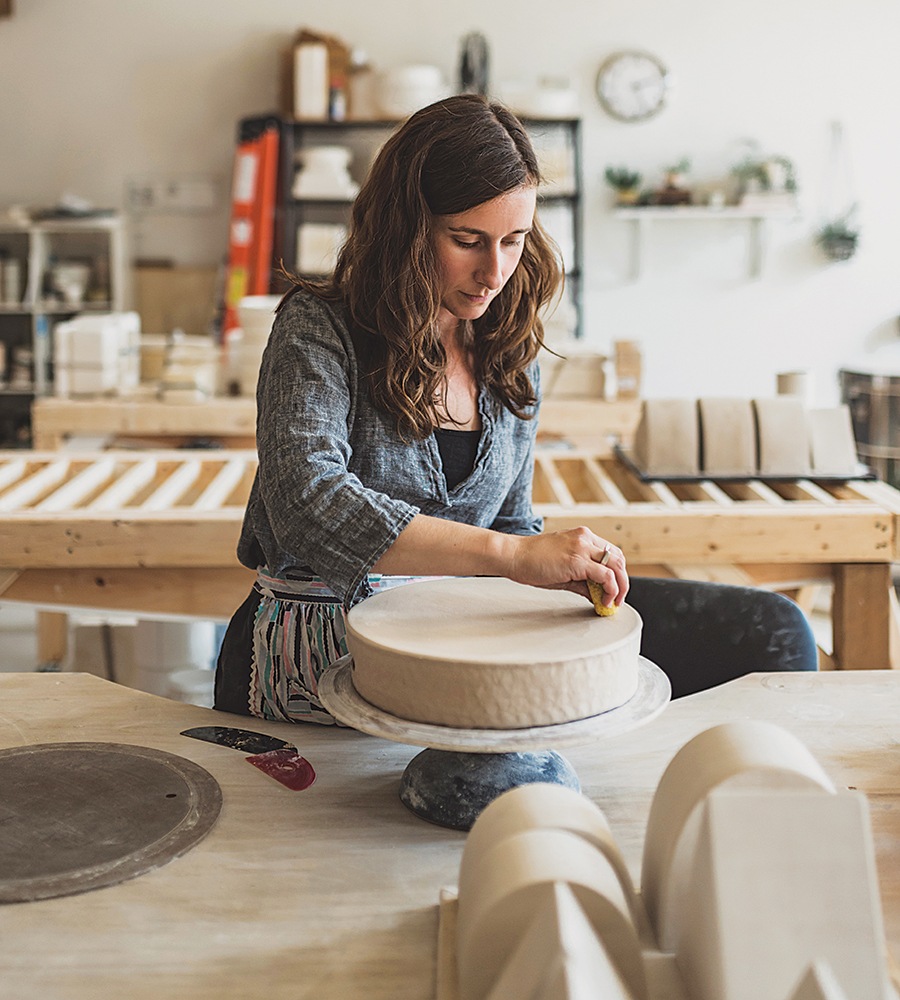 Benotti carefully smoothes out any unwanted scratches and fingerprints with a sponge—the final step before a piece is loaded into the kiln. / Photo by Asher Oak 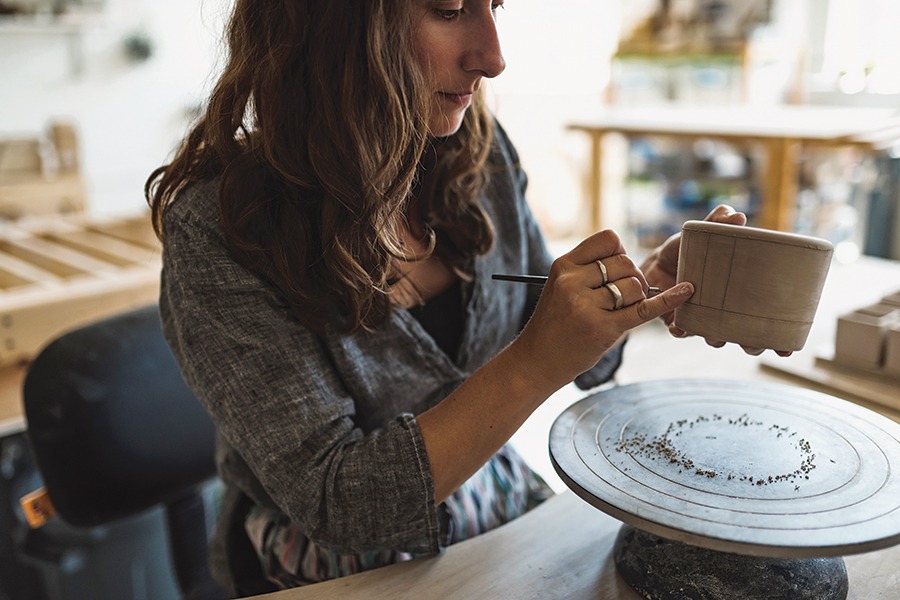 Once a cup becomes “leather-hard,” Benotti says, she carves a pattern into it using a Japanese technique called mishima. / Photo by Asher Oak

Some 24 hours later, after the fully formed planter has been fired in a kiln at 1,950 degrees, it’s ready to be decorated. For the pinstripes, Benotti paints lines onto the planter with wax resist, which will burn off during a second firing and expose the clay’s natural hue. To add color, she slowly dunks the piece into a barrel of house-made, colored slip. As for the inside, Benotti pours in glaze and swirls the liquid around. She then returns the planter to the kiln for its second (and final) firing at 2,200 degrees.

Aside from this building process, Benotti says the most gratifying part of the job is seeing where her creations end up. “I send off all of these pieces and have no idea what they’re getting used for,” she says. “I like when people share photos.” A friend, for instance, once sent her a snapshot of a Benotti-made salt cellar on the Food Network, while a pal in New York City showed her Shopify advertisements featuring her homewares. But, Benotti says she’s equally excited to receive messages from satisfied customers. “Knowing that my hard work brings [happiness] into another person’s home is the reward,” she says.