The Coming Eviction Crisis Will Be Worse Than You Think

Advocates say a tidal wave of 20,000 evictions isn't just a housing problem—it's an issue imbedded in racial inequity that could cause a surge in COVID-19 cases, and even act as a form of voter suppression. 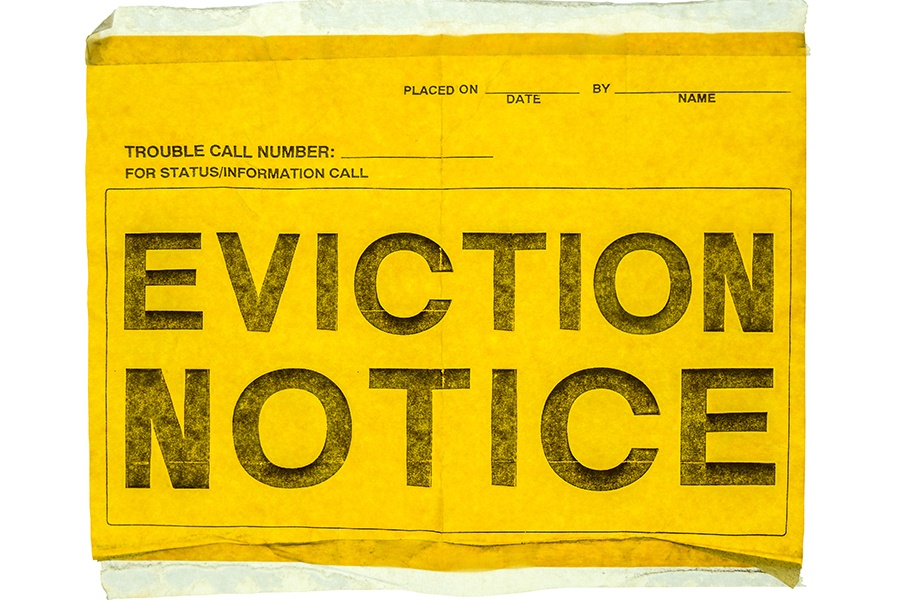 When Gov. Charlie Baker signed the statewide eviction and foreclosure moratorium in late April, it was an approval with an asterisk: The freeze would lift 45 days after the COVID-19 state of emergency ended or 120 days from the date the bill was passed, whichever came first. There’s no predicted end to the pandemic in sight, but the sand in the 120-day hourglass is set to run out on August 18. And, housing courts estimate, some 20,000 evictions will be filed in Boston that day.

From April to June, polling data from MassINC revealed that nearly 30% of Massachusetts renters missed a partial or entire rent payment, and only 21% of them say they are likely to be able to make up that money by the time the moratorium ends. After July 31, those on unemployment will stop receiving the $600 booster that the CARES Act contributed. As we creep closer to a crisis fueled by dwindling funds, continued unemployment, and not enough time, legislators and housing advocates say that a tidal wave of displacement in August would not only result in a surge of homelessness, but likely in coronavirus infections. Given that the state is still under a safer-at-home advisory to prevent the spread of the virus, unhousing thousands of residents at once could quickly unflatten the curve. “The consequences will likely be new surges of infection, increased displacement, further destruction of neighborhoods, and increased numbers of people experiencing homelessness,” wrote State Rep. Mike Connolly in a blog detailing his bill to extend the moratorium for a year.

Greater Boston towns including Chelsea and Revere, and Boston neighborhoods such as East Boston, Mattapan, Dorchester, Roxbury, and Hyde Park have been hit the hardest by the pandemic. And, research shows, we can expect to see an onslaught of evictions in those same communities when the moratorium lifts. A recent study from MIT and City Life/Vida Urbana pointed out that 70% of Boston’s eviction filings in market-rate housing are in parts of the city with a majority of residents of color, while 37% of all market-rate eviction filings are in majority Black neighborhoods—even though they only contain 18% of the city’s rental housing. In the window after the pandemic began and before the moratorium was put in place, three out of every four eviction filings were in communities where people of color make up more than half the population.

But that upcoming deluge of evictions would come with another consequence for communities of color that have already been disproportionately affected by the pandemic, says Beth Huang, director of the Massachusetts Voter Table, a nonprofit whose work includes increasing voter participation. It would affect their ability to cast a ballot. “Voting in a representative democracy is about where you live, so if where you live is always in flux, then it becomes a lot more difficult to have a responsive government. That’s why we have always seen housing issues as core democracy issues,” she explains.

“If we don’t do anything to protect the thousands of renters [who can’t pay rent], we’re cutting the most vulnerable people out of the electorate, because people who get evicted are going to have to choose between their physical health and their ability to cast a ballot in the September primary election. And if there’s a second wave, we’ll likely see similar devastating impacts on the political power of people of color, immigrants, young people, and more in the November 3 general election.”

Part of the solution is a bill that allows for mail-in voting, which Baker signed into law on Monday. But the other hurdle is ensuring that people aren’t evicted from the addresses where they would receive those ballots. “Can you imagine being evicted in August, having to get your kids to a different school, all while you’re unemployed? There’s no way that person is going to vote,” Huang predicts. “But if people can stay in their homes, have a stable mailing address, and get a message from a community organization telling them not to throw out their ballot, I think we have a halfway decent shot at making sure that people can express their political power safely.” Once Secretary of State William Galvin sends out the applications for mail-in ballots to the state’s 4.5 million registered voters, the Mass. Voter Table will begin the process of making calls to households to ensure they’ve received the form and know how to fill it out.

There is more hope potentially on the way for tenants facing down a mid-August deadline. A series of other bills that deal with the impending eviction crisis directly are awaiting approval. One, introduced Connolly and House Housing Chair Kevin Honan, would cancel evictions for a year after the end of the Massachusetts state of emergency for renters who can’t pay due to COVID-19. The bill, which currently has 69 cosponsors, is dubbed “The COVID-19 Housing Stability Act,” and would also freeze rents at pre-pandemic rates and create a fund to help property owners make their payments, among other protections for renters, homeowners, and even landlords. “Immediately upon passage of the bill, the cancellation of rent as the basis of eviction, the rent freeze, and the guarantee of housing stability immediately goes into effect,” explains Connolly. “The fund is there to begin to unwind and defray the financial obligations that could potentially remain.”

While some landlords have supported an extension of the eviction ban, Connolly recalls extreme opposition from the real estate industry in the passing of the initial moratorium back in April. “Up until the final hour before Governor Baker signed our eviction and foreclosure moratorium bill into law, the real estate industry was actively lobbying to reject it—in the middle of the worst pandemic in 100 years,” he says. Despite the pushback, Connolly is encouraged by other legislation pending on the federal level that aligns closely with the COVID-19 Housing Stability Act.

Senator Elizabeth Warren has introduced the “Protecting Renters From Evictions and Fees Act,” which would extend and expand eviction protections for 12 months from March 27, 2020. “Housing is a human right and an absolute necessity to keep families safe during this crisis, and Congress must step in now to help keep people in their homes,” Warren told Vox, who first reported on the bill.

At the end of June, Baker announced the Emergency Rental and Mortgage Assistance program, which provides $20 million of funding to those who need rental and mortgage aid due to the pandemic—up to $4,000 per eligible household. He has so far refrained from making a decision on extending the eviction and foreclosure moratorium, which is six short weeks from running out.

While the current intersection of layoffs, evictions, coronavirus, and an approaching election season have made the need for preventative action urgent, housing advocates are quick to point out that these issues have long been entrenched in Boston’s culture, from unlawfully racist and classist practices by housing providers to evictions affecting predominantly non-white neighborhoods. The only difference, says Huang, is that right now, “All of these inequities are compounding on each other. And in this moment of reckoning on racial inequalities, these evictions are going to impact Black and brown communities. This implicit voter suppression is going to impact Black and brown communities. And we need to do everything to make sure that these communities have a real voice in how we recover.”