Though Baker’s decision to extend the eviction and foreclosure moratorium provides immediate relief, many housing advocates believe it’s merely kicking the can down the road. 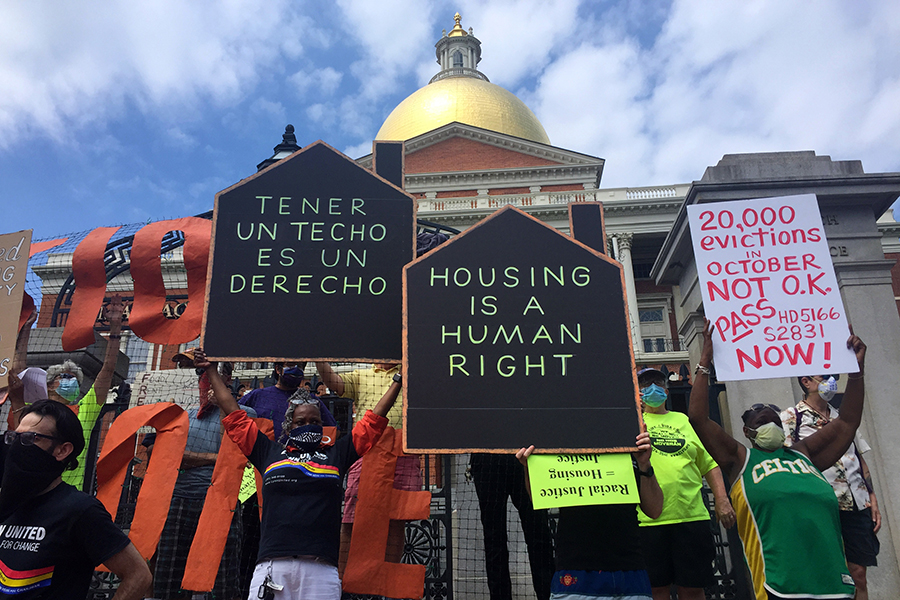 Protesters in front of the State House stairs call for the passage of HD.5166. Photo courtesy of City Life/Vida Urbana

As much as each day of the pandemic tends to blend together, there is one date that has stood out for months: August 18. That is, the day that the eviction and foreclosure moratorium enacted back in April was set to lift in Massachusetts, unleashing a slew of unhousing in a time where the best advice for staying safe is to stay at home.

And then yesterday, that date changed. Using his authority to extend the tenant protections in up to 90-day increments, Gov. Baker announced a 60-day postponement, shifting the new deadline to 11:59 p.m. on October 17. “I am confident that [the moratorium], coupled with federal assistance, helped to slow the spread of COVID-19 while minimizing the impact to date on vulnerable families and on our housing market,” wrote Baker in a letter to House Speaker Robert DeLeo and Senate President Karen Spilka. “The extension I am declaring today will provide residents of the Commonwealth with continued housing security as businesses cautiously re-open, more people return to work, and we collectively move toward a ‘new normal.’”

But as colleges grapple with going back to campus in the fall, public health officials warn of a second surge, and Massachusetts is facing the highest unemployment rates in the country, it seems that a sense of normalcy is still far in the rearview. Following Baker’s announcement, tenants, housing advocates, and elected officials alike promptly took to Twitter to express that while an extension was critical, it only provides 60 more days of stability for residents on ultimately shaky ground.

We’re glad the Governor listened to voices of renters, homeowners & advocates across MA & extended the #EvictionMoratorium. By 10/17 when it ends, MA will be in the middle of a 2nd surge of #COVID19. #Mapoli should PASS the Guaranteed Housing Stability bill, HD.5166, NOW! https://t.co/0usM6CKnRp

State Rep. Mike Connolly, whose bill “An act to guarantee housing stability during the COVID-19 emergency and recovery,” or HD.5166, has received the support of 87 legislators and more than 200 organizations, says tenants need a full year of security. “While we are grateful for today’s announcement and we recognize it will help ensure stability for thousands of Massachusetts residents in the coming months — we will also continue pushing for a comprehensive bill to protect tenants, homeowners, and landlords from any negative impacts as a result of COVID-19,” he said in a statement to Boston. Beyond preventing COVID-related evictions and foreclosures for 12 months after the end of the state of emergency, the bill would freeze rent at pre-pandemic rates and establish a recovery fund for small landlords to alleviate missing payments.

Baker also addressed the impact of a prolonged moratorium on landlords—many of whom are less than happy about another two months of unmet rent—writing in his letter that he encourages tenants and homeowners to continue making rent and mortgage payments as much as possible, and calling attention to the $20 million ERMA fund he has set aside for assistance for lower-income earners to make housing payments, in addition to the state’s preexisting RAFT program. “Between now and October 17, my administration will assess whether additional federal and state resources should be made available for this purpose. We also will be working closely with our colleagues in the judicial branch to ensure that when evictions proceedings resume there are programs in place to help tenants pay their rent and avoid eviction,” he wrote.

In the meantime, Connolly, his constituents, and other housing advocates continue to press for the passage of HD.5166. Today, racial equity organization City Life/Vida Urbana organized a rally in front of the State House, a car caravan, and a Zoom meeting to urge legislators to approve the bill, along with Dorchester-based New England United for Justice, Springfield No One Leaves, and Lynn United for Change. The expanded security offered by the bill is imperative, says Steve Meacham, Coordinator of Organizing for City Life/Vida Urbana, because by mid-October, he doesn’t believe the pandemic will have settled. “It could be worse, if anything. We don’t want to have to deal with evictions as part of that public health disaster, and we don’t want to have people on the street or doubling up on their sister’s sofa because they got evicted.”

Though an October 17 cutoff is preferable to the original date just a few weeks away, many anxiously facing down a new deadline see it as “kicking the can down the road,” says Meacham. “Because let’s face it, two months isn’t a very long time.” And a late-fall date also brings concerns about displacement just after the start of the school year, in the midst of a presidential election, and just before winter begins to blow in. In the past four months, City Life/Vida Urbana has received some 1,700 calls on their hotline from concerned community members. Several came in the last 24 hours, from tenants wanting to know what exactly this extension means for them, and many came in the preceding weeks from teachers worried for what would happen to their students and their families at the end of August.

Does all of this add up to optimism that HD.5166 will be passed? Connolly expressed that the significant support behind the bill and the work of advocates has already had an impact on Baker’s decision-making, saying, “It’s no accident the Governor decided to extend the current moratorium for an additional two months on this day, a full four weeks before its pending expiration date.”

Meacham says he feels optimistic because he has to: “The alternative is just so devastatingly bad.” He points out that such legislation would not only impact the city dwellers that would otherwise face eviction—it would help the city and state’s recovery as a whole. “One of the themes of the pandemic is that we’re all in the same boat. And taking care of each other is not altruism, it’s the best thing for everybody, because we can’t economically recover while we’re in danger of dying.”

He encourages residents to call their legislator to urge them to back the bill if they haven’t already, and to ask that they call on leadership to do so if they have. As the legislators’ formal session ends on July 31, advocates are appealing for the bill to be passed before that date.