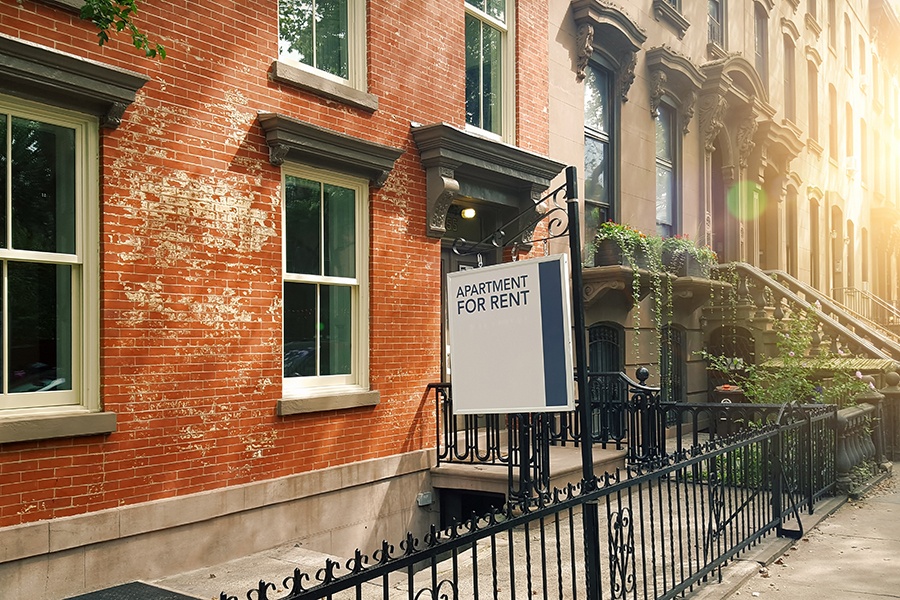 By the time August rolls around, only the daredevils and deal-seekers are still looking for apartments in Boston, scouring the picked-over listings. The rest of us are Allston Christmasing and luxuriating, warily, in the peace of our signed leases and too-high rents. But this year, September is a few weeks away and the rental market is almost unrecognizable: Vacant apartments abound, rents are dropping, and landlords are willing to waive fees, allow pets, grant lease flexibility, and do pretty much anything to secure a paying tenant.

A recent report from Zumper shows that one-bedroom rents in Boston have had a 6% year-over-year decrease, a decline the city hasn’t seen since 2016. It’s yet another symptom of the pandemic: San Francisco and New York, the other top rental markets in the country, have followed suit with reductions of 11% and 7%, respectively. As for inventory, “when comparing available one-bedroom Boston listings in July 2019 to July 2020, the number of available units has doubled,” says Crystal Chen, an analyst at Zumper. To put it plainly: There are more units than interested tenants, and the traditional power dynamic has flipped.

Beyond lower rates, landlords are piling on other incentives to sweeten the pot and lure occupants inside. John Puma, COO of Boston-based real estate agency and apartment listing site Places for Less, has been keeping a close eye on the rental market. He’s seen market-rate apartments offering a month of free rent and luxury buildings shelling out two or even three gratis months. “They’d rather take a reduced rent for the remainder of the year than have it go vacant for who knows how long,” he explains. He’s seen property manager flexibility extend to credit scores, income bracket, and even employment status: “Landlords have accepted tenants based on just their unemployment income right now.” And for local and international students who are sticking around the city, some landlords are forgoing the usual requirement for a co-signer, a time-honored hindrance for coeds seeking housing in Boston. Other housing providers are paying the broker’s fees themselves, forgetting about security deposits, and accommodating month-to-month or semester-long leases. It’s the renter’s market we’ve always needed, but never actually arrived. If only it hadn’t taken a pandemic to bring it about.

So how did we get here? First, the virus settled into Massachusetts and Gov. Baker declared a state of emergency in early March, just around the time landlords would typically start asking tenants whether they intend to renew their leases. Some decided to hunker down, while others chose to delay their search for a new place, unsure of what was to come. “This led to a very slow beginning to the Boston rental market this spring as few renters were apartment hunting in the early stages of shutdown,” says Van French, rentals manager for Gibson Sotheby’s.

As the summer burned on, many people didn’t get a late start to the process of looking for a new place, but rather left the city altogether. Some of those included professionals working from home for the foreseeable future—Google just announced that employees will work remotely until 2021, setting a precedent for other companies—and no longer had to plan their housing around their commute. Undergrad and graduate college students who left for the summer and aren’t returning for the fall now that universities are releasing their limited reopening plans are another demographic the market is now lacking. For some, locking down a pad in the city just doesn’t hold the same appeal these days. “Many renters now prefer more space—and outdoor space—than what their current Boston apartment can offer, so they’re looking on the outskirts. Other renters simply don’t feel safe in a busy city like Boston during a pandemic, so they are opting for less densely-populated locations. Each of these groups of people are potential renters being removed from this year’s client pool,” says French. And the fact that they’re not all one homogeneous group means all parts of the city are being affected.

However, for those looking to take advantage of a market rife with bargains (by Boston standards), there have been a few hot spots, according to Puma. “The most drastic price reductions are definitely in the college areas, so Allston, Brighton, and Fenway. And of course those areas happen to have the larger units, so three-, four-, and five-bedrooms.” The largest cut he’s seen so far? A five-bed in Brighton which listed for $4,200 in June, and slid to $3,000 by the end of July—a sweet $240 savings per roommate.

Rents aren’t going down across all of Metro Boston, though. While they plummet in more expensive centers such as Cambridge (where the one-bedroom rent has dropped by 5.6% since this time last year), Somerville (-4.5%), Chelsea (-6.9%), and Revere (-14%), they’ve actually gone up in traditionally less pricey markets, according to a just-published Zumper report. The median one-bedroom rents in Brockton and Lawrence, for instance, have increased by 15%, and Beverly has seen a nearly 9% uptick. It’s a national effect that Zumper analyst Neil Gerstein calls a “squeezing” of the market: “The most expensive cities in the country are decreasing prices and the least expensive cities are increasing them, so the top is coming down and the bottom is coming up.”

In good old Boston, if you’re among those still looking for a rental right now, figure out what you want from a unit, and then ask for it. That’s French’s advice. “For the most part, Boston landlords have had the power and held all the cards over the past 10-plus years. They could set a price, require the first and last month’s rent, a security deposit, brokerage fee, and more often than not, they would get it. With the market as it is now, it’s a different ballgame.” He recommends finding a few spots, starting with your favorite, and then making an aggressive but reasonable offer.

As the clock keeps ticking, Puma predicts we’ll continue to see property managers cutting deals, even well past September 1 as they continue to try to fill units throughout the year. “It’s tough, because unfortunately, no matter what they offer at this point, there just aren’t enough tenants to fill them no matter what the price or incentives are.”

“It’s a numbers game of supply and demand,” says French—pure and simple. “There are simply more apartments available than there are renters this year.” And for what feels like the first time, the numbers are finally working in renters’ favor.