This 1870s Somerville Home Got a High-Drama Makeover 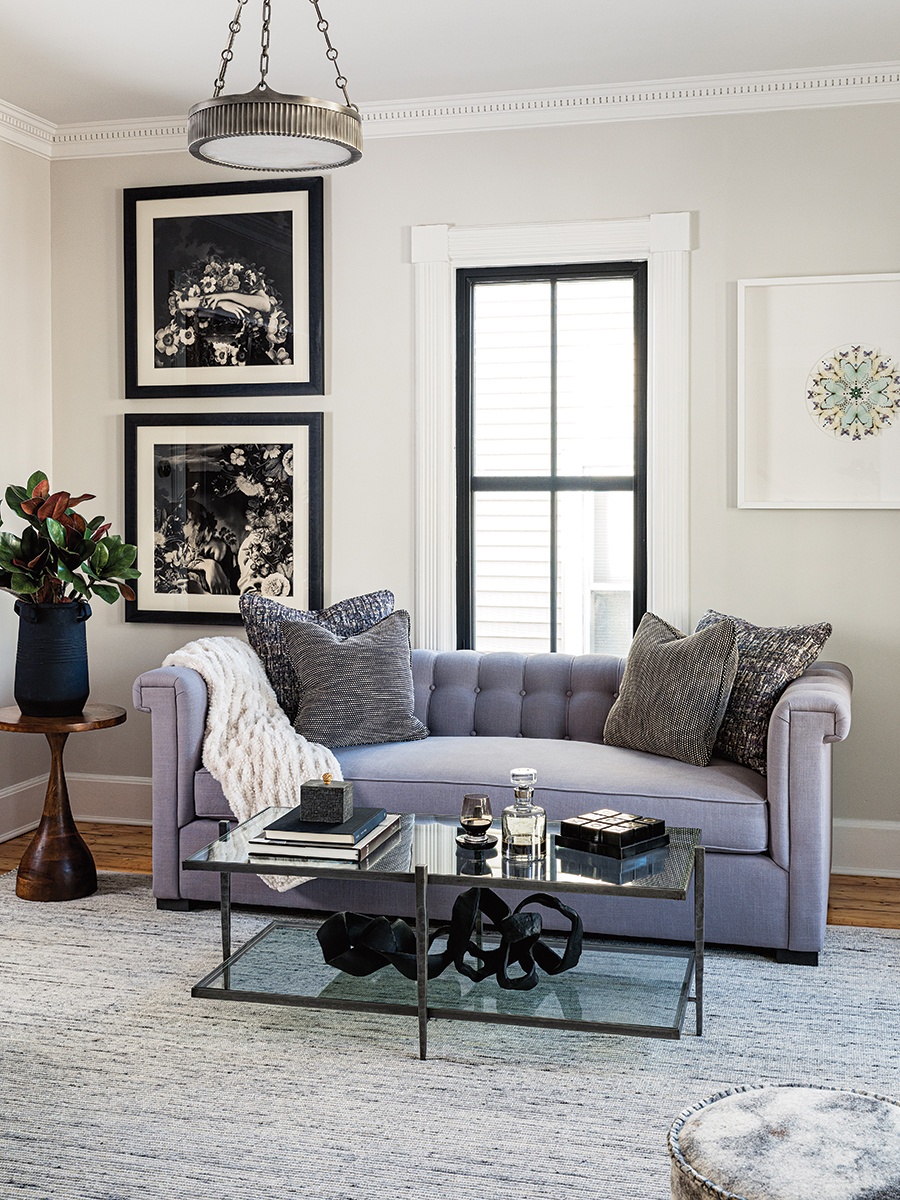 In the family room, a custom Chesterfield upholstered in light-purple fabric serves as a subtle punch of color. “We didn’t want to make every room color-blocked,” interior designer Nikki Dalrymple says. “So [most] of the rooms got a subdued, neutral palette to [put] the furnishings and art more on display.” / Photo by Sean Litchfield

Call us crazy, but wouldn’t you think a historical home would look, well, historical? Such was the conundrum with this circa-1877 Somerville house, dubbed “The Old Lady on Loring” by its artsy owner. By the time she bought it, a series of renovations had completely divested the Italianate-style house of its original character. Even before the closing papers were signed and keys were in hand, the mission became clear: give the madame the full, high-drama restoration she deserved.

Enter Nikki Dalrymple. The Acquire principal had walked through the three-story house in the closing stages and knew it would need a gut renovation to create the antique-y, eclectic-but-elegant feel the homeowner wanted. So she called in frequent collaborator Vintage Builders, showed them the plan—which included adding extensive millwork and updating the house’s plumbing and electrical systems—and got to work. 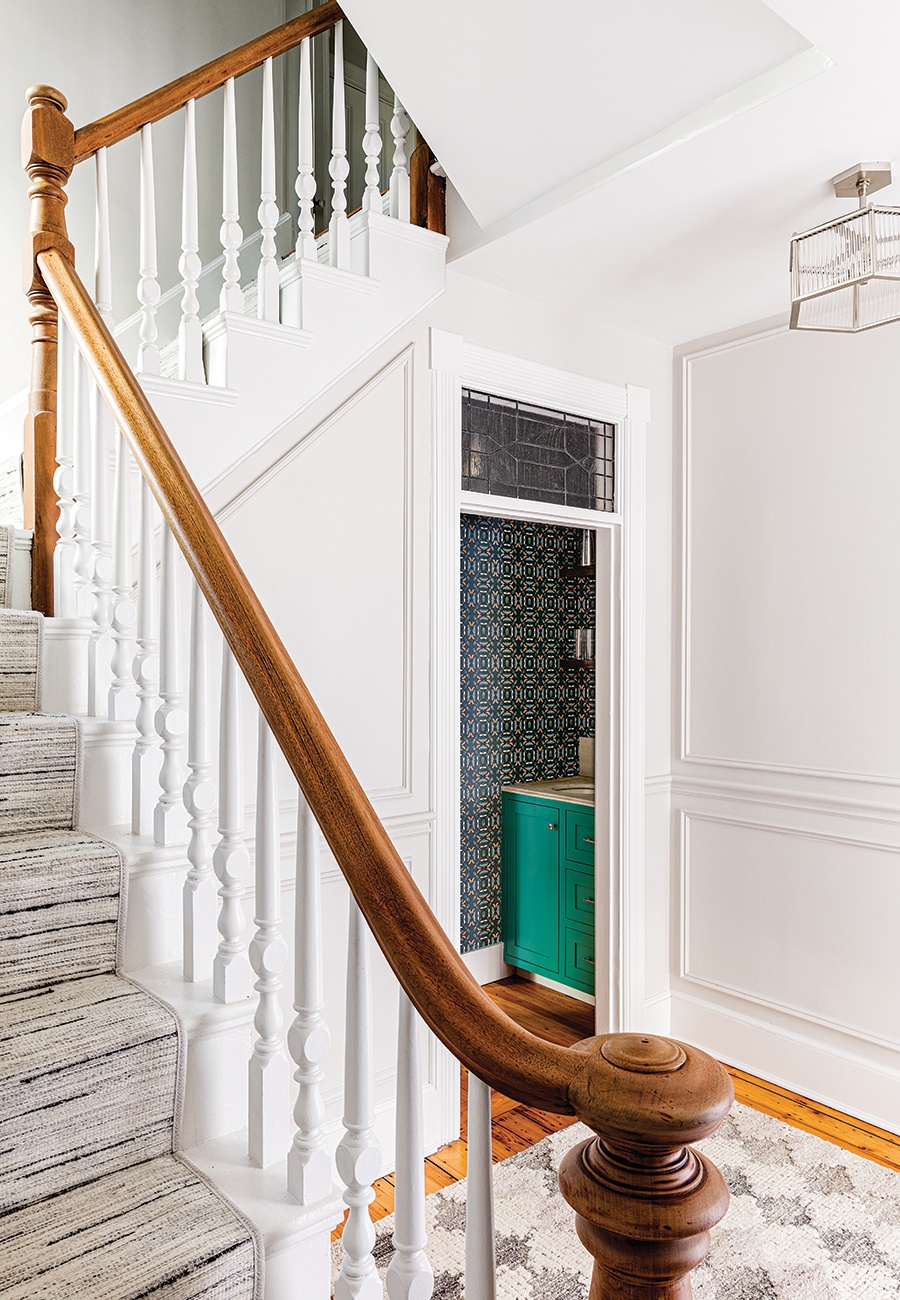 To brighten the formerly gloomy entryway, Dalrymple’s team stripped the newel posts and stair railings and stained them to match the pine floors. They then painted the rest of the staircases crisp white, using a super-durable marine paint. / Photo by Sean Litchfield 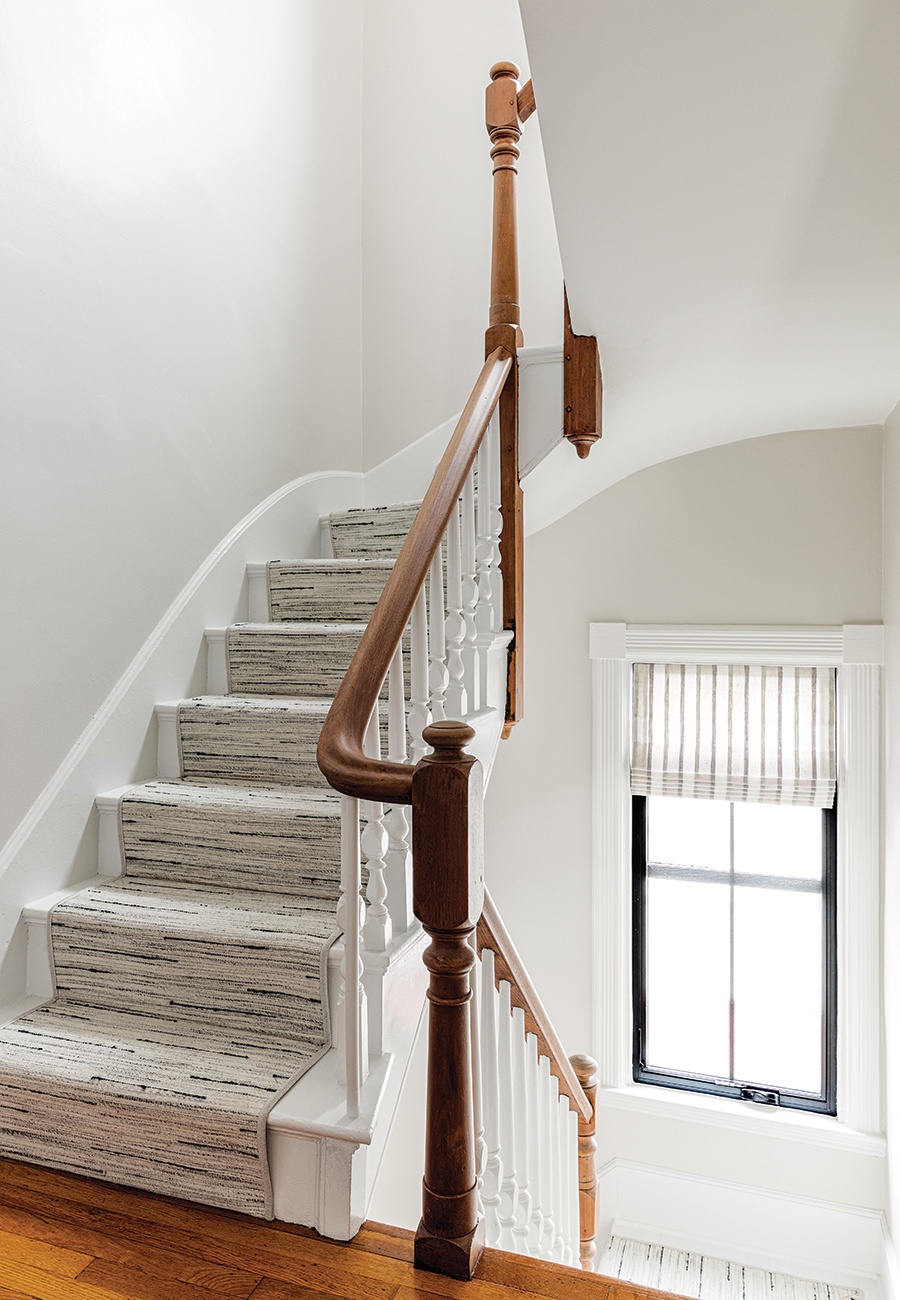 To begin, Dalrymple and her team had to strip the 2,350-square-foot home down to her bones. That required ripping up the first floor’s contemporary hardwood flooring, which yielded a surprise gem—the original flooring, made of gorgeous, 8-inch-wide pine planks. “That was a huge gift to us,” the interior designer says. “And it obviously, no pun intended, grounded the space for us to build upon.”

With the flooring as an omen, the team moved on to what was perhaps the biggest part of the project: re-incorporating the 19th-century details the Old Lady had lost. That meant adding millwork and molding all over the ground floor, from crown molding with dentil detailing to specially commissioned ceiling medallions. Elsewhere on the first floor, builders freed pocket doors that had been painted into their frames, re-installed antique hardware uncovered after the electrical system was rewired, and put in two seeded-glass, turn-of-the-century-esque transoms in the entryway. “Not only was it about making the home beautiful and evocative of that time period,” Dalrymple says, “but it was also about just making everything up to code!” 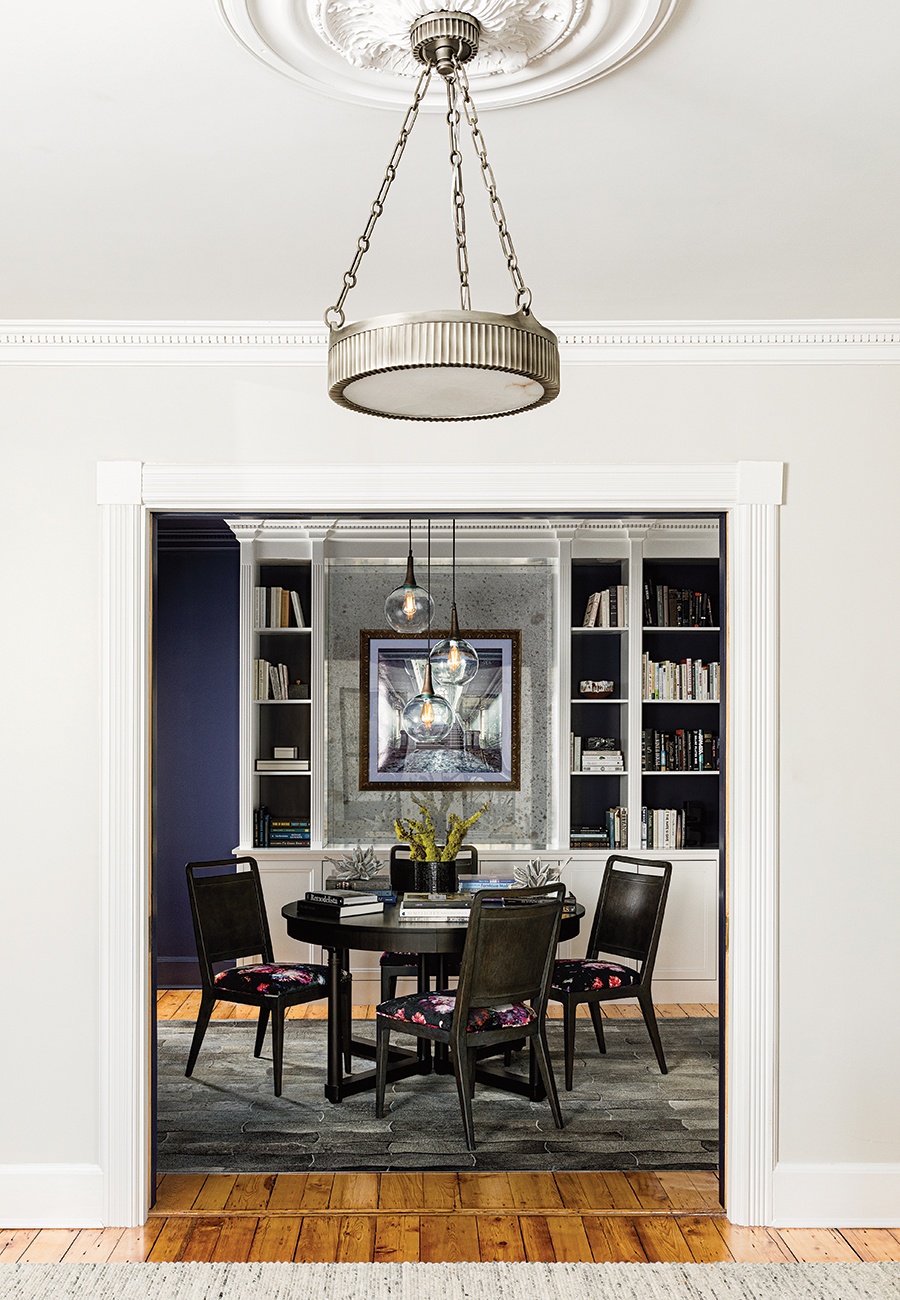 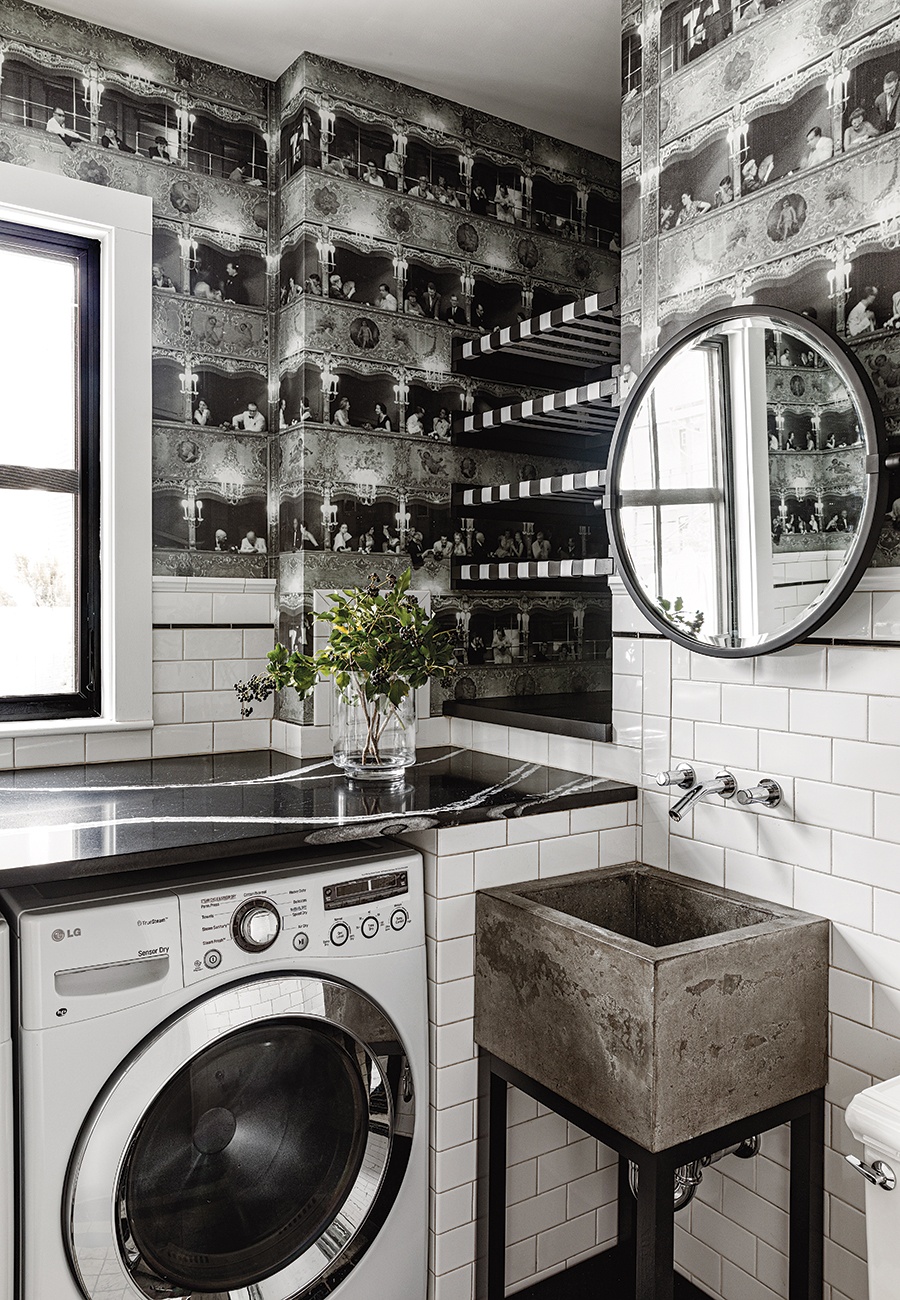 Tracking down the combined laundry and powder room’s Trove wallcovering, which the homeowner had originally spotted in a restaurant, was no small feat. “She remembered it was black and white and had people attending an opera [on it],” Dalrymple says. “After going down a Pinterest wormhole one day, I finally found it!” / Photo by Sean Litchfield 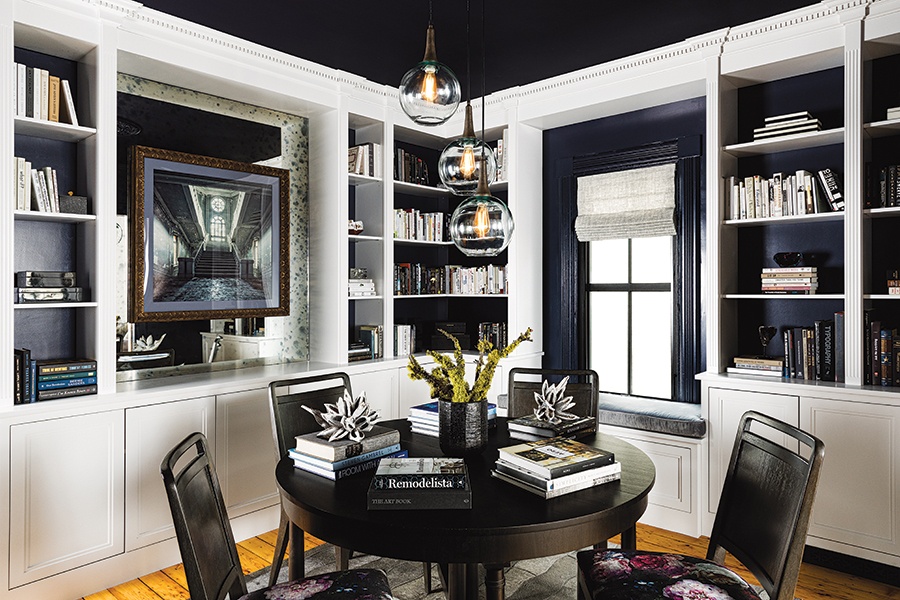 “The homeowner is a huge bibliophile and wanted a dining room that felt like a library,” Dalrymple says. Here, bespoke built-ins contain shelves for housing the owner’s book collection, and push-open cabinetry for storage. / Photo by Sean Litchfield

Then came the fun part: the drama. “The homeowner has a real whimsical sensibility,” Dalrymple says. “She wasn’t afraid of [things like] fun and quirky wallpaper.” For example: In the combined laundry and powder room, white subway tile gives way to Trove’s “Fuoco” wallcovering, a photographic, opera-box-dotted print. The butler’s pantry, meanwhile, is home to Jennifer Shorto’s “Onyx” wallcovering, a geometric pattern formed by insects. Dalrymple also injected strategic pops of color, most noticeably in what she calls the “dining library.” In the book-filled dining room, she offset stark-white custom built-ins with walls painted a dark eggplant. “The homeowner is a big fan of purple,” she explains. “It can be such a gorgeous color when it’s not overly sweet, so we tried to implement it in a way that felt a bit moodier.” (Which would explain the family room’s traditional Chesterfield, upholstered in a very nontraditional purple-gray.)

The home’s other accent color? Jet black. “I don’t do any project that doesn’t have a little black in it—it’s like mascara; you need it,” Dalrymple says. So, she explains, “every room has a black detail [somewhere in it],” even if just in the raven-hued Marvin window frames. The kitchen, however, is where the color shines, thanks to lower cabinets painted in Benjamin Moore’s “Mopboard Black,” as well as oil-rubbed bronze finishes. 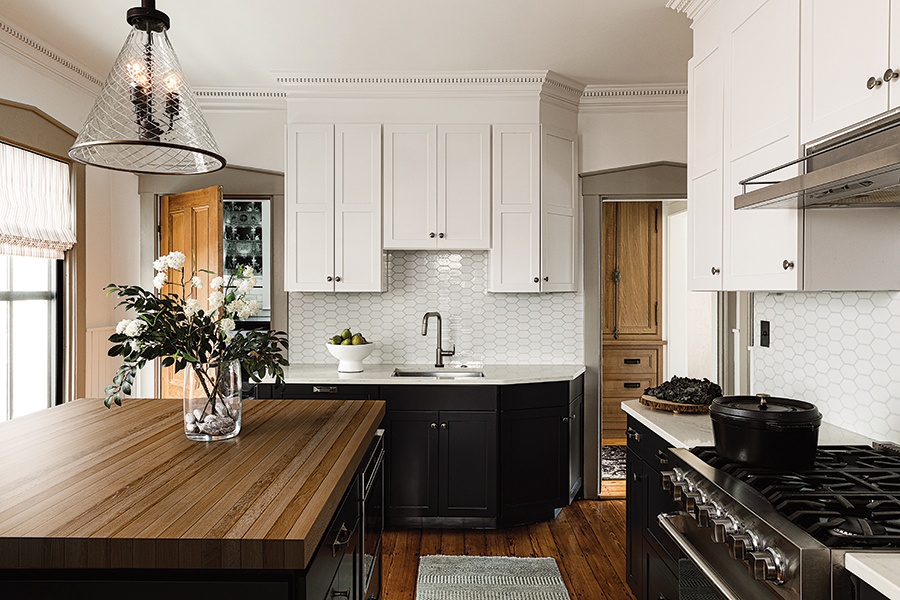 The kitchen received more of a refresh than a total renovation, Dalrymple says. The team reconfigured the island slightly, adding a microwave drawer and topping the whole thing in reclaimed oak. They also added dentil molding above the upper cabinets, painted the lowers, and installed a glass-tiled backsplash from DiscoverTile in between. / Photo by Sean Litchfield 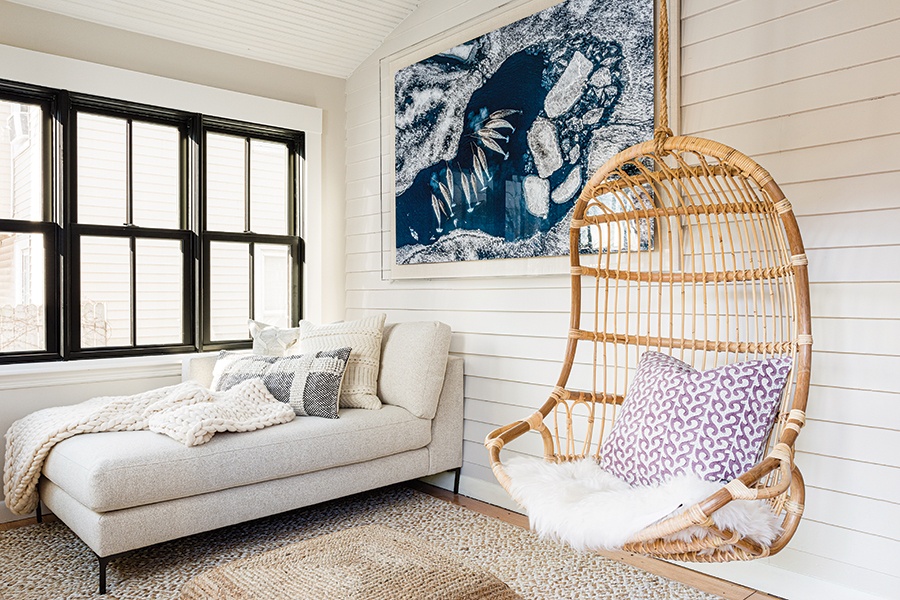 In the sun porch, lounge spots include a hanging rattan chair from Serena & Lily and a Pottery Barn chaise. / Photo by Sean Litchfield 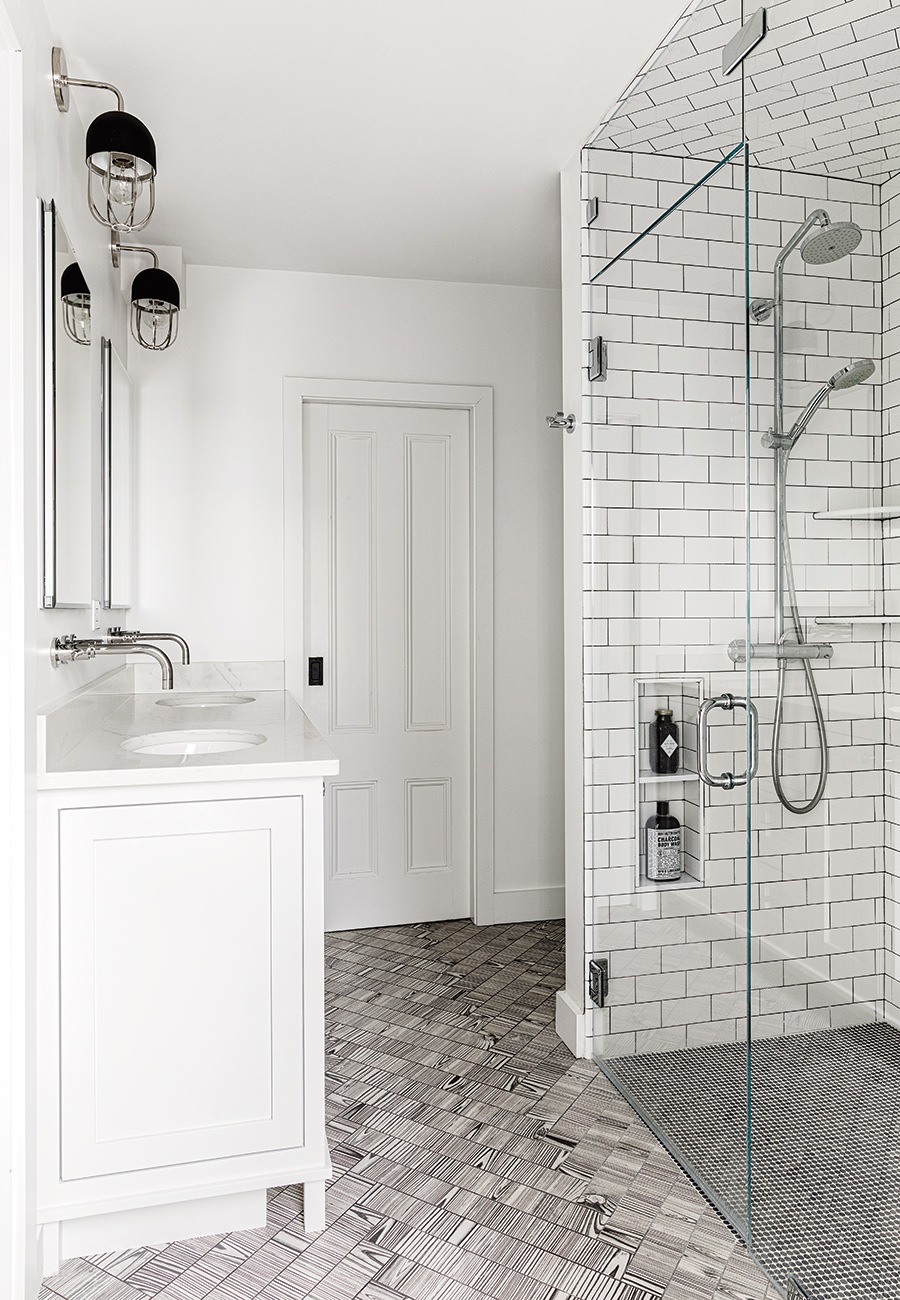 The team enlarged the primary bathroom by stealing space from the adjacent closet, allowing for a double vanity and separate shower and toilet spaces. / Photo by Sean Litchfield

The rest of the house keeps things bright and airy. Creamy colors and cozy textures create a relaxing vibe in the sun porch, while black-and-white tiles offer visual interest in the primary bathroom. And speaking of airy: “The homeowner wanted a big shower,” Dalrymple says. So the team installed a floor-to-ceiling glass door “so she can take steam showers, which is really nice,” the designer adds. “I want that!”

Now, with her new look complete, it’s clear that this Old Lady got her groove back. “There were some really whimsical pieces and finishes that we brought in, so we had a lot of fun on this project,” Dalrymple says. “We got to stretch our design muscles on this one.” 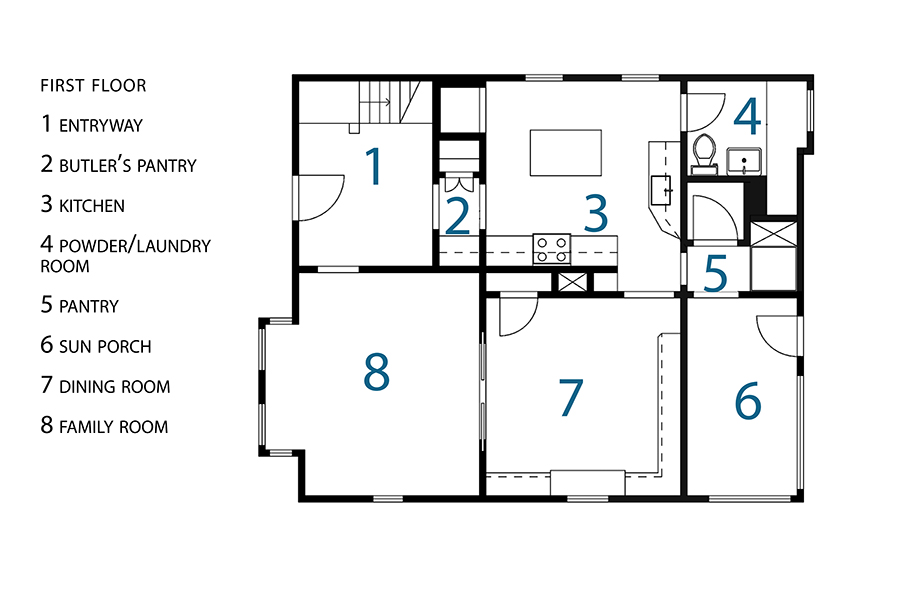 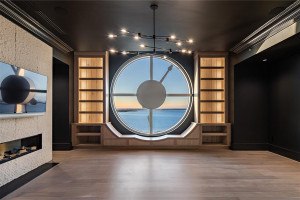