Three Major Effects Coronavirus Is Having on the Boston Housing Market

When COVID-19 moved into the city, many decided to move out. What's the real estate market look like now? 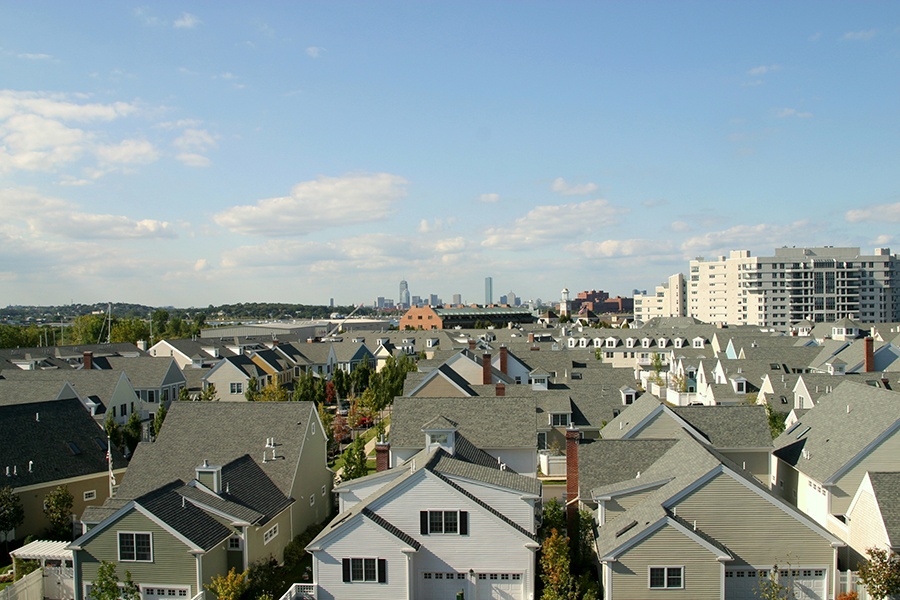 The coronavirus crisis has changed almost everything about the way we’re living, and where and how we’re living is no exception. There’s a lot going on in the Greater Boston real estate market right now: Interest rates are entrancingly low, the rental market is changing, and the pandemic has influenced quite a few committed city dwellers to consider moving out. Between empty nesters keen to take advantage of a hot suburban market and downsize, work-from-homers looking to flee the city limits, home-all-the-time families on the hunt for more space, and renters starting to consider buying, it’s a lot to keep straight.  Here’s a three-point cheat sheet for what to know.

Exurbs are the new suburbs.

With no commutes to tie now-remote workers down, many urbanites have decided to pack up their home offices and move outwards—to Central Mass., the South Shore, the Cape, and other areas outside the perimeter of the city’s soaring price range. It may have started with a summer rental or few-month stint bunking up with family, but now that indefinite work-from-home policies and remote school plans are rolling in, many are making the move permanent. Mary Gillach, owner of the Gillach Group at William Raveis has one such example: A young couple living on Marlborough Street knew they wanted to stay put in the heart of Back Bay for at least another few years. But then COVID-19 settled into Boston, and almost immediately, they headed to the Cape to lay low for a while, before recently committing to buying a house in Orleans. And that’s characteristic of what she’s been seeing all summer long. “We’re definitely not just trending in that direction, we’re really moving in that direction,” she says.

As for the closer suburbs, it’s not that they’ve gone out of style, but that low inventory and a large pool of motivated buyers have propelled a sprawl. Still, familiar ’burbs such as Arlington, Winchester, Medford, and Lexington have continued to thrive, says Steve McKenna, a Gibson Sotheby’s realtor based in Arlington. “People still want the walkability and they don’t want to have to get in their car for everything, especially those coming from the inner city.” So accessibility to shops, sidewalk-lined centers, and proximity to the city persist as attractive features.

The demand for single-family homes is high.

Another of Gillach’s clients was originally looking to stick to the close-in suburbs, like Medford. But, she says, “We kept going further and further out because there were multiple offers on everything in the $600k, $700k, and $800ks. And that’s never true there, especially in the summer.” They eventually landed in Beverly, a North Shore locale 25 miles outside of Boston. The pattern of tight inventory and bidding wars has driven prices way up: The median single-family sale price increased by 4.5% from June 2019 to 2020, up to $679,075 this year, per the Greater Boston Association of Realtors. While multiple offer situations have been more prevalent than ever—Redfin reported that 72% of its Boston listings experienced bidding wars in June—McKenna says that many buyers are avoiding that nail-biting process by letting increasingly popular escalation clauses do the work for them. When those are employed, if a house receives another offer, the  bidder’s offer is stepped up to a predetermined maximum price above their initial asking so the buyer doesn’t have to keep coming back with new numbers. The seller doesn’t have to accept the new offer at that point, but increasingly, they are.

“We’re seeing more sellers accept the best offer rather than go into the highest and best scenarios,” says Jason Gell, a Brookline-based agent for RE/MAX Unlimited. “Escalation clauses are part of what is driving this, but so is the desire to limit exposure, especially with occupied homes. The sellers are getting great offers and they’re accepting them and moving on rather than fighting for every dollar.” After all, who needs the added stress of an outbidding frenzy during a pandemic?

The condo market isn’t what it used to be.

It’s not hard to see where the single-family home fever is coming from. Beyond feeling less tethered to the city and more able to explore suburban pastures, COVID-era house hunters are above all looking for more space to themselves. “Over 70% of our buyers in Arlington are young urbanites,” explains McKenna. “And they’re saying, we need two home offices, we need a homeschooling space for the kids, we need a family room, and we need separate spaces.” Smaller or open-concept condos, it seems, just aren’t able to supply so-called Zoom rooms and all those other new must-haves. According to the GBAR’s June data, not only did the volume of condo sales go down significantly—from 1,253 sales in June 2019 to just 706 this summer—but the median sale price went the opposite way of single-families, decreasing by 4.4% to $592,500 this June.

Playing into the decline in popularity is the fact that the shared areas many condo buildings once touted as value adds now read as risky nuisances. Who wants to figure out how to stay six feet apart in an elevator? Instead, condo to single-family converts are opting for fewer shiny amenities but the peace of shedding their face mask as soon as they walk through the front door. And of course, there’s no getting around the truth that even at their cheapest, city condos are pricier than more spacious homes in the outskirts. Whether the move is motivated by a need for more space or more affordability, “You simply get more for being outside the city,” says Gell.