We asked “streetscape curator” Matthew Dickey to tell us about his favorite homes and roads around the city—from architectural oddities to impossibly charming streets, here are nine spots you have to see. 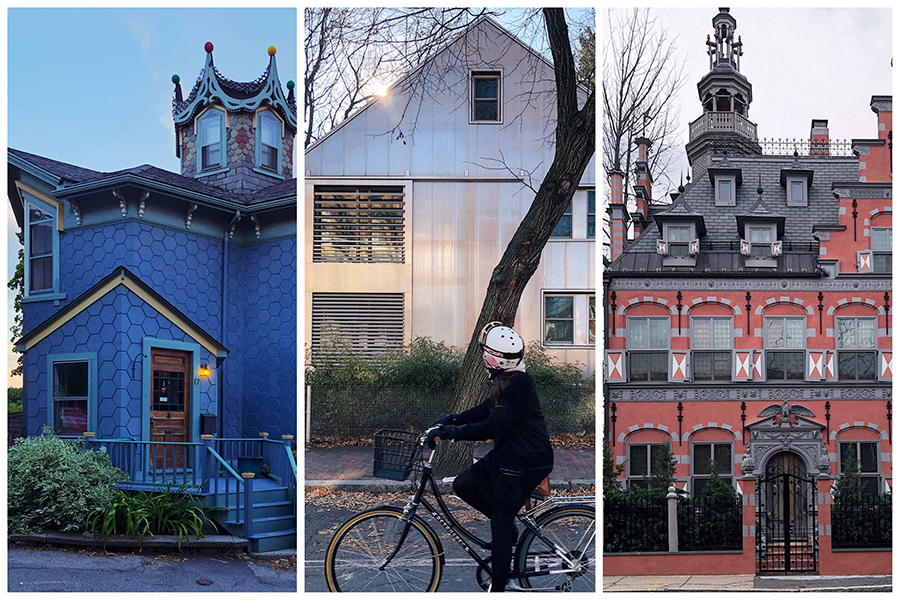 One of the charms—or, depending on your viewpoint, nuisances—of Boston is the way its streets follow no discernible pattern. It’s less carefully planned out grid, more tangled spaghetti on a plate. Sure, pavement pasta is inconvenient for driving or otherwise getting around, but it’s the reason you can live in the same apartment for years and still find new hidden gems if you just stroll down a different alley one day. And with little opportunity to do much else besides walk around the city lately, now is the perfect time to seek out some of those treasures.

We asked Dorchester-based photographer and “curator of streetscapes” Matthew Dickey to tell us about his favorite buildings and lanes around town. Dickey has led walking tours, serves as the communications manager for the Boston Preservation Alliance, and photographs (and paints) buildings around the city for his popular Instagram account. What makes a spot worth dismounting his bike and stopping to learn more? “We are all current stewards of the city doing our part to add to it,” Dickey tells me, “and some of the most interesting buildings of Boston are the ones that reflect the many layers of history, and continue to add to the history.”

An expert on capturing Boston’s prettiest homes and most magical corners, he did not disappoint—read on for the architectural walking tour you didn’t know you needed.

Head to Brookline to find this piece of Chicago history and Dutch design. The intricately adorned building was first built by the Van Houten cocoa company for the 1893 World’s Fair, where attendees slurped hot chocolate and roamed its halls. Designed to resemble the Franeker City Hall in the Dutch city of Friesland, the replica caught the eye of Charles Brooks Appleton, who had the edifice broken down and then re-built “brick by brick” on a road in Brookline, as Dickey tells it. The street was later named Netherlands Road, in honor of the origins of its most notable residence. Dickey says he loves this one because “it’s unlike anything else in the United States. It’s actually a piece in the Netherlands in Boston.”

Forget the four lines and a sloped roof picture you drew as a kid—this 12-sided house looks nothing like your average single-family. Built in the 1800s, the home was at some point covered in asphalt, until the current owners uncovered the exterior to reveal a magnificent honeycomb facade: Wooden, hexagonal shingles cover all 12 faces of the residence. “Think of three hexagons linked together like a basalt cliff,” Dickey wrote in his Instagram caption, “and everything a shrine to the hexagon.”

Or, as Dickey calls it: The Glowing House. Situated in Cambridgeport, the futuristic looking dwelling is actually from the 19th century—but nowadays it wears a polycarbonate casing. Architects Alessandro Armando and Manfredo di Robilant designed the renovation to improve the home’s energy efficiency. The way the translucent panels give the walls a shimmering appearance by day and a lantern-like effect by night is an added bonus.

The North End’s Skinny House may carry the title of best-known spite house, but this eight-foot-wide hut actually edges it out. The sliver of a building may have been built out of pettiness, but today it’s in good use as an adorable shop that sells globally-inspired houseware.

For the largest neighborhood in Boston, Dickey says Dorchester doesn’t get its due as a part of the city to explore. With an eye drawn to color, he loves this particular sub-section because Ashmont hill is chock-full of vibrant Victorians. “They’re very well preserved and it’s easily walkable once you get off the train station [at Ashmont],” explains Dickey. “And the colors are just really amazing, like wow, I didn’t know you could have a yellow that yellow.“ Looking for a starting point? He recommends strolling down Florida Street to spot some excellent Queen Annes among peppily painted triple deckers and elegant brick rowhouses.

What’s not to love about a converted carriage house? And in Beacon Hill, to boot—it’s a captivating combination. “Much of the flats of Beacon Hill were used as stables. In the case of Byron Street, they served the larger homes on Beacon Street,” Dickey explains in his caption. Bring a travel mug of hot cocoa on a chilly walk down Byron Street for a serious dose of home envy. Just be prepared to frequently set down your beverage to snap photos.

Beyond eye-catching colors, when looking for a good streetscape, Dickey is always on the hunt for moments “that make me feel like I’m almost somewhere else, but that in doing so are so Boston.” This Georgian mansion—one of four “Royal Colonial Governors’ residences” left in the U.S.—is stationed just a few minutes outside of Nubian Square. The grounds comprise gorgeous landscaping, gardens, and even an orchard, which you can rove around freely. The 1747 relic is now a house museum, and if you buy a ticket and book a private tour, you can see how royal governors lived.

You can learn a lot from looking at old maps. That’s how Dickey discovered a series of narrow lanes around the city—branching off in the area around Charletown’s Bunker Hill Monument, and trickling off like tributaries of main streets in Beacon Hill. Revere Street is one locale where you can veer off and meander along these pedestrian-only ways. “In old Boston, a highway was only about six feet wide (big enough for a horse-drawn carriage),” he explains. “And people didn’t all have carriages, so some were just for pedestrians.” Though the city has certainly changed over the decades, these tiny ways remain pretty much the same, some even with gas lamps plunked down in the middle.”It’s picturesque as cuss,” according to Dickey.

And here’s a hot tip for navigating ridiculously charming private streets all over the city: “Because it’s a private street does not mean the public can’t go there—it just means the city doesn’t care for it,” he explains.

Given its stature, this tower isn’t exactly a hidden gem, but you may have forgotten how cool it is. Originally a Victorian-era water tower servicing the city, these days it’s the Gothic showpiece of Fort Hill. Plus, it offers at least one compelling reason to wish for snow: When the frost sets in, it looks like a Disney-worthy ice castle, which sets the scene for some stellar sledding.