Art Deco Details Abound in This Gorgeous Back Bay Condo

Thanks to architect and interior designer Dana Arazi Levine. 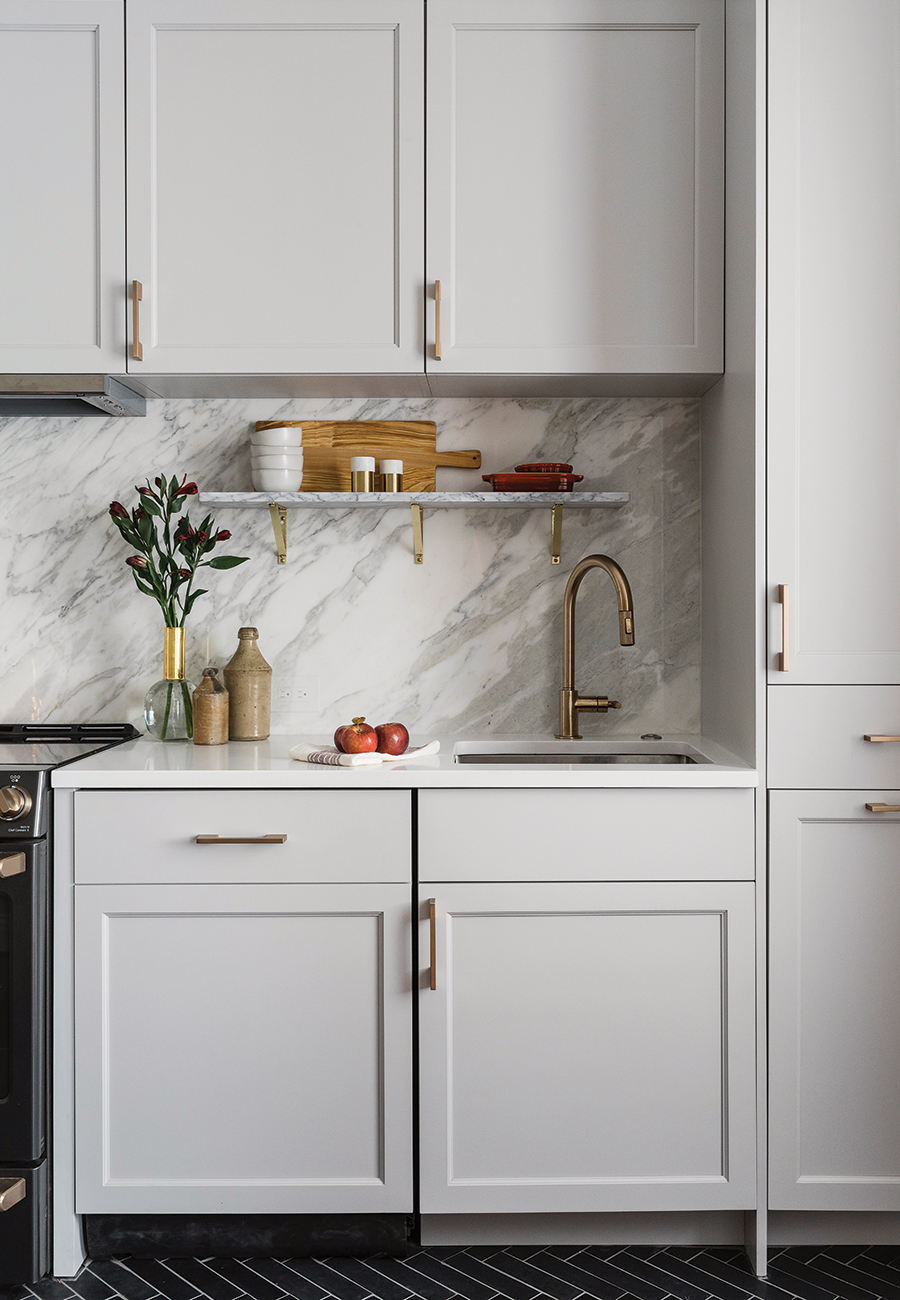 Affixed to the marble backsplash, a marble shelf with brass brackets help create a wet-bar feel in the kitchen. / Photo by Joyelle West

Lauren DeVestern and Stan German adore the original mahogany paneling that lines the combined living-and-dining room in their Back Bay condo. In fact, it was the woodwork (and the Charles River views) that first drew them to the two-bedroom unit, located on the third floor of a historical townhouse built in 1870. That architect and designer Dana Arazi Levine was equally smitten left no doubt that the couple had found the right professional to update their new home, which—despite the elegance of the grand, panel-clad main room—needed some sprucing. “I love applying techniques that modernize a space without sacrificing architectural integrity,” says Levine, who specialized in reviving Bauhaus buildings in Tel Aviv before relocating to the States. “We were on the same mission.”

Hired by the pair in 2019, Levine got to work on a plan. Her main priorities: renovating the outdated kitchen and baths, implementing a cohesive interior-design scheme, and adding architectural details to the private spaces to match the vibe of the living-and-dining room. “The front and back of the house were completely disjointed,” she says. The idea was to bring the 1,200-square-foot condo back to the glory days of its first occupants—a well-to-do couple who, like DeVestern and German, moved there from Beacon Hill after marrying—while also suiting the present-day owners’ disparate tastes. “My husband would be happy with all modern, but I like a little bit of old,” DeVestern says. Levine’s solution? Art deco–inspired interiors. “[The style combines] clean geometry for him with rich materials for her,” she says. 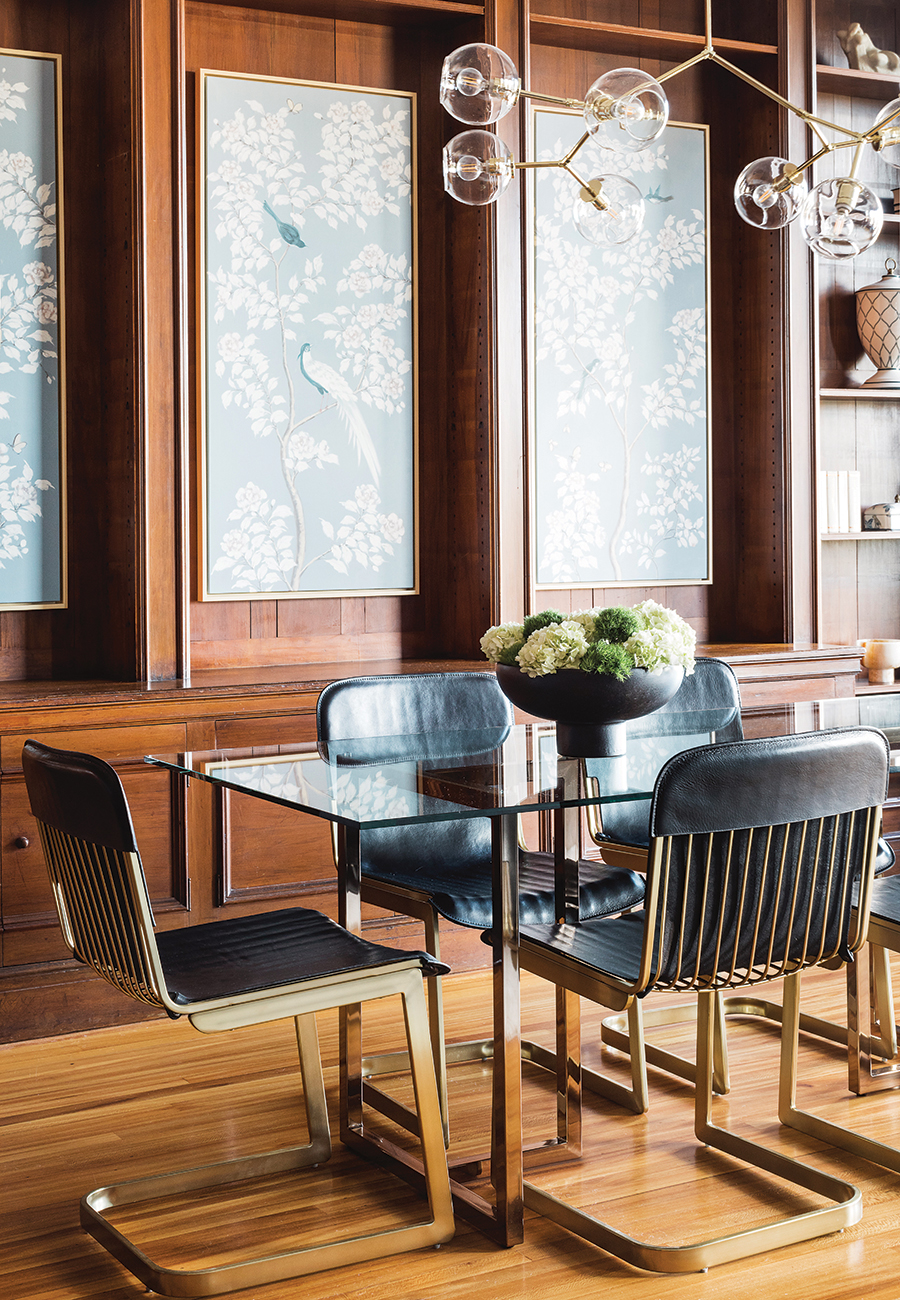 The dining area’s minimalist glass dining table lets the chairs’ art deco silhouette stand out without overpowering the woodwork. “I didn’t want the table to be the main event,” designer Dana Arazi Levine says. Above, the shape of the chandelier mimics the branches pictured in the triptych—the first piece Levine selected for the space. / Photo by Joyelle West 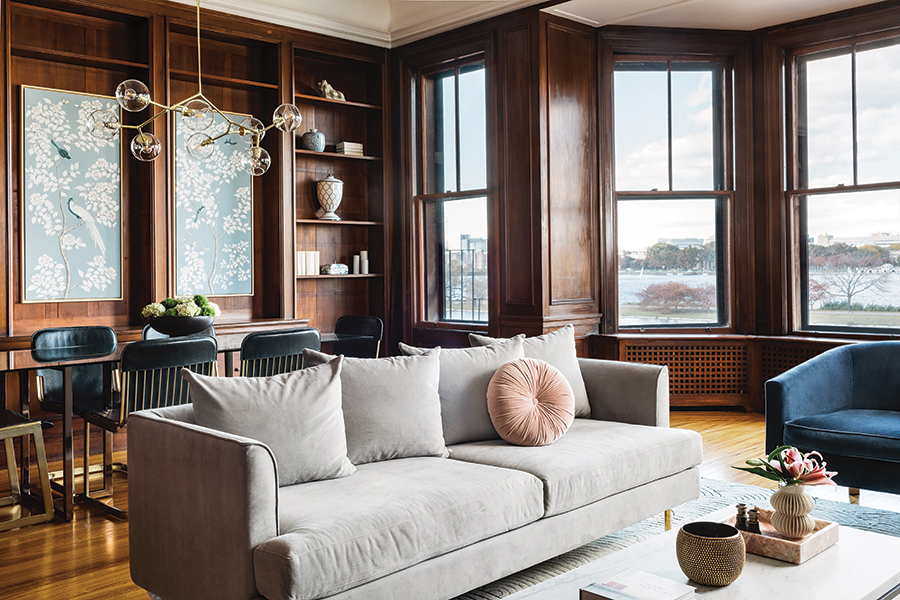 Levine likens the mahogany-paneled living space to a room in which Jay Gatsby might have entertained, complete with a Gus Design Group sofa from Lekker Home and a round, pleated pillow that references the palette of the couple’s private quarters. / Photo by Joyelle West 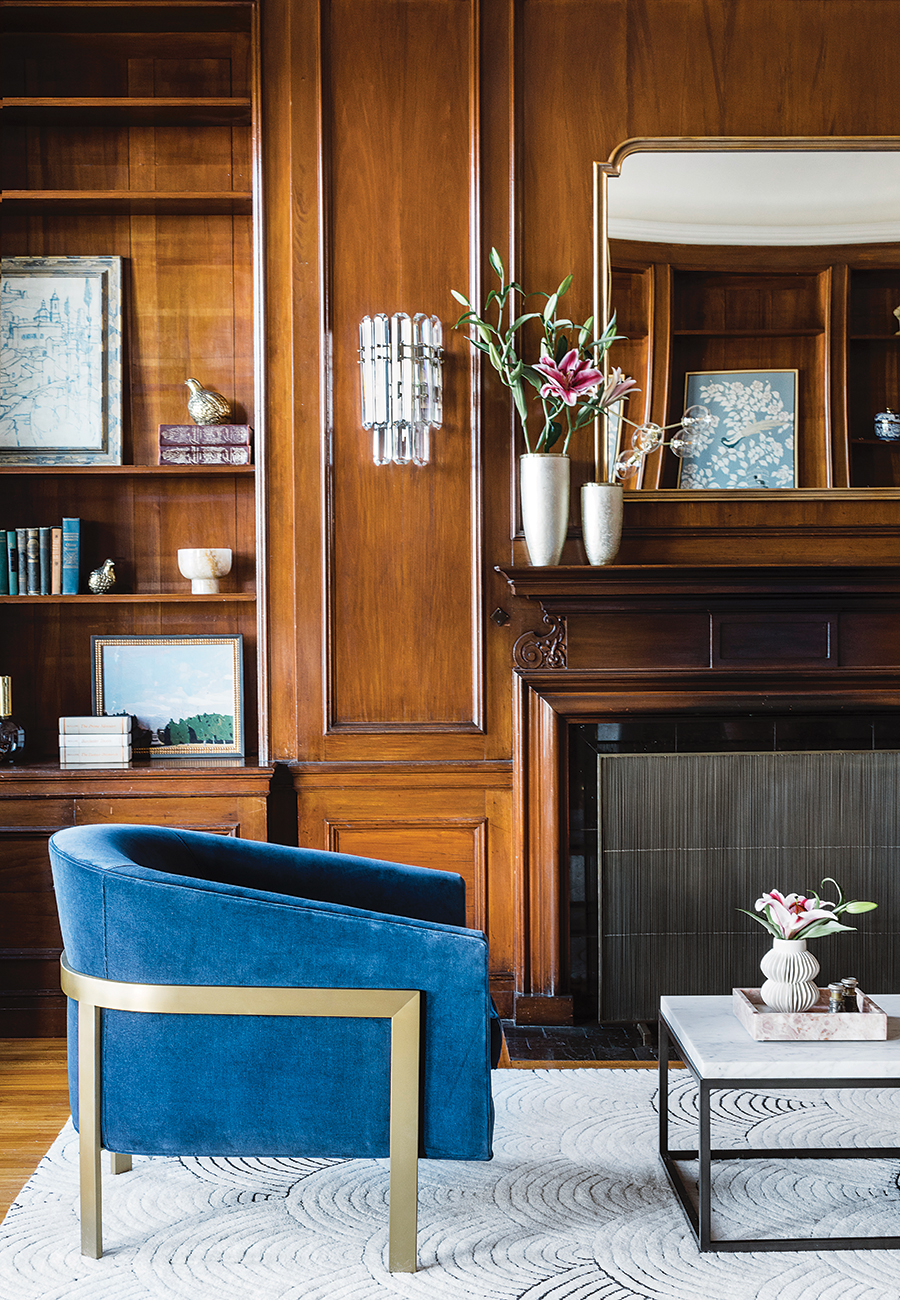 Homeowner Lauren DeVestern vetoed placing the television over the fireplace, so an oversize mirror—flanked by Aerin crystal sconces—hangs there instead. / Photo by Joyelle West

Completed over the course of nine months, the designer’s work touches nearly every inch of the home—including the main living space. There, a chinoiserie-style triptych picturing flowering branches sets the mood. The arrangement, displayed within built-ins on the side of the room Levine designated for dining, reads like an oversize art piece that speaks to DeVestern’s romantic sensibility. German’s tastes, meanwhile, are reflected in the area’s modern chandelier—a branch-like fixture suspended over a dining table, which (these days) does double duty as a workspace.

On the other side of the room, Levine created a sitting area that balances formality with comfort. Like the dining area, this space needs to function as well for guests as it does for private time. A Gus Design Group sofa with loose cushions is relaxed enough for watching television, while the deep and cozy club chairs, upholstered in velvet, offer a sophisticated touch. “It’s where they entertain and hang out,” Levine says of the space. “It needs to be pulled together, but not stiff.”

The makeover continues in the kitchen, one room over from the main living space. To enhance the connection between the rooms, the designer widened the kitchen opening and framed it with mahogany trim to match the paneling. She made the kitchen itself larger, too, by borrowing square footage from the adjacent guest bathroom. Decidedly stylish, the expanded area features a mahogany island—a reproduction of a 19th-century piece—that, like the patina of the encaustic cement floor tiles, lends age to the contemporary cabinetry, range, and marble-slab backsplash. “The kitchen is completely new, but still looks like it belongs in the condo,” Levine says. 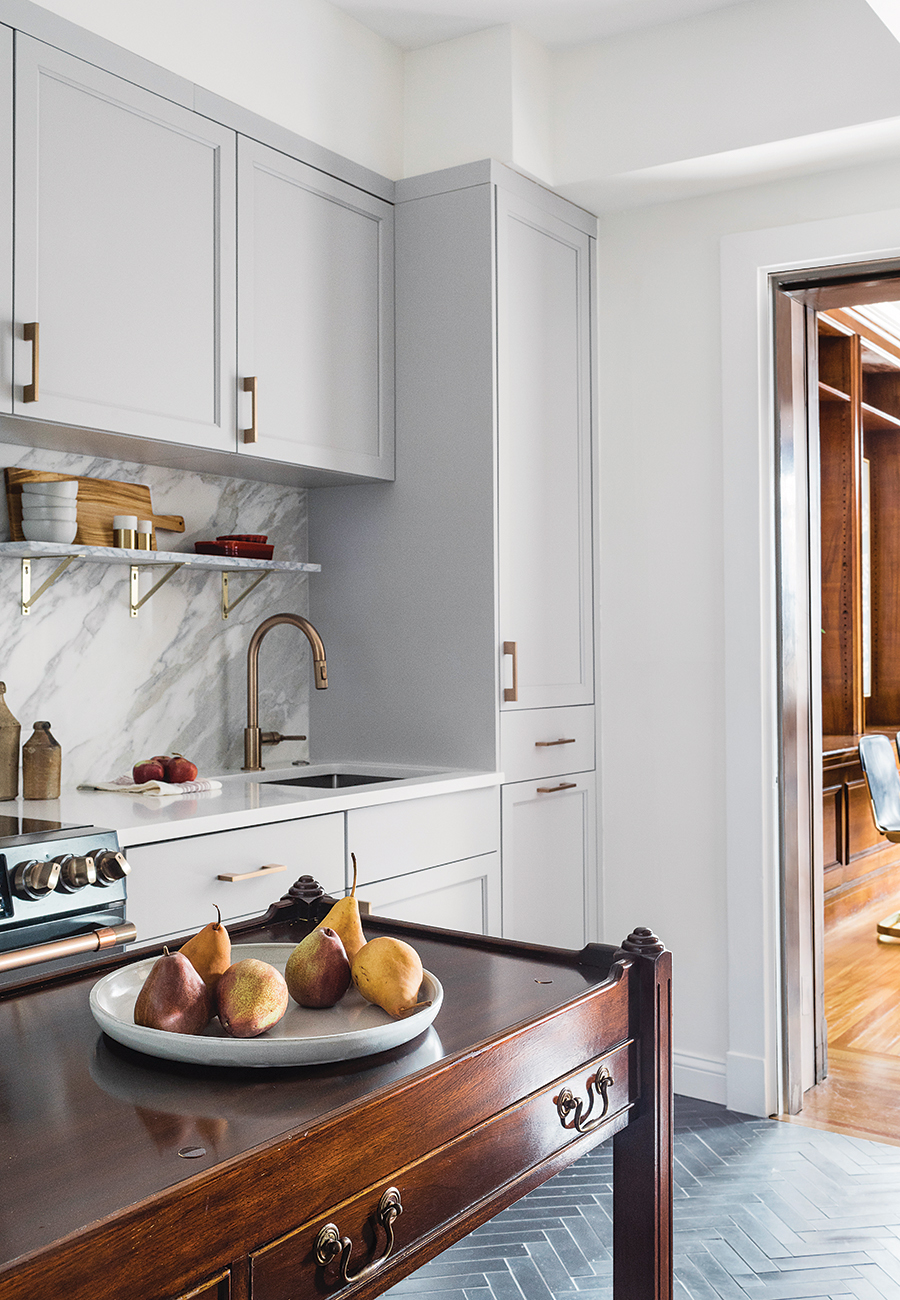 In the kitchen, an island from Trosby Furniture via Chairish also serves as an entry sideboard. “Guests walk in, stop for a drink and appetizers, then continue to the main room,” Levine says. / Photo by Joyelle West 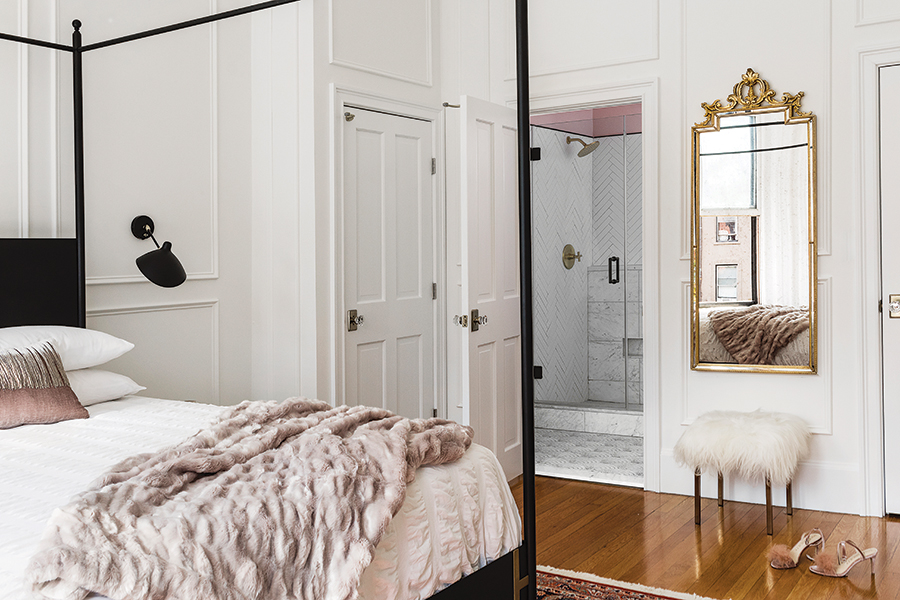 Levine hung an antiquated mirror in a gilded frame above a sheepskin bench to create a mini dressing area in the bedroom. / Photo by Joyelle West 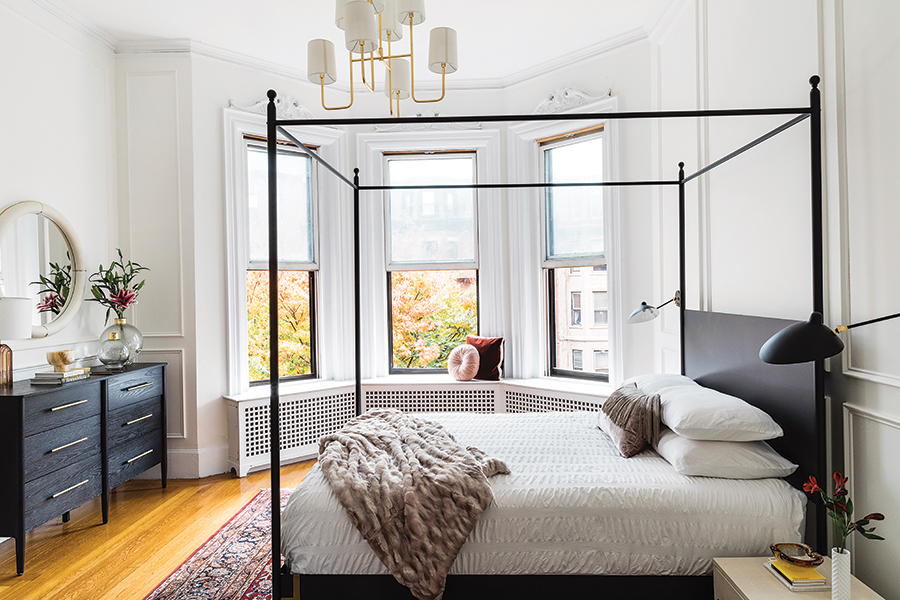 A gently curved chandelier by Barbara Barry purchased from McGee & Co. hangs above the iron-and-steel canopy bed from Doorman Designs. “The canopy bed creates a sense of enclosure in this large room with high ceilings,” Levine says. / Photo by Joyelle West

A careful blend of modern and antique details also adorns the couple’s bedroom, which overlooks Beacon Street. Smart black touches such as an iron-and-steel canopy bed inject contemporary flavor and contrast the white walls, outfitted with new moldings to break up the expanse. Elsewhere, a velvet pillow with silk fringe, a carved giltwood mirror, and an Oriental carpet passed down from DeVestern’s grandmother offer a softer feel. “This room is nice for unwinding,” DeVestern says. “The sound of the leaves rustling and birds whistling helps hide city noise.”

The couple also finds peace in the en suite bath, inspired by London’s Henrietta Hotel. To bring down the scale of the room, which calls on a 1920s color palette, Levine divided the main wall into three sections: The top portion sports dusty-pink paint, the middle is tiled in a herringbone pattern that references the look of the kitchen floor, and the bottom boasts marble wainscoting. The scalloped, mosaic floor tile, meanwhile, echoes the living room rug and intensifies the art deco vibe.

With the renovation behind them, the couple look back and give Levine high marks for helping them articulate their tastes and ensuring they worked together. “Our furniture is modern, but the jewelry—the accessories—are old,” DeVestern says. “The mix is seamless.” 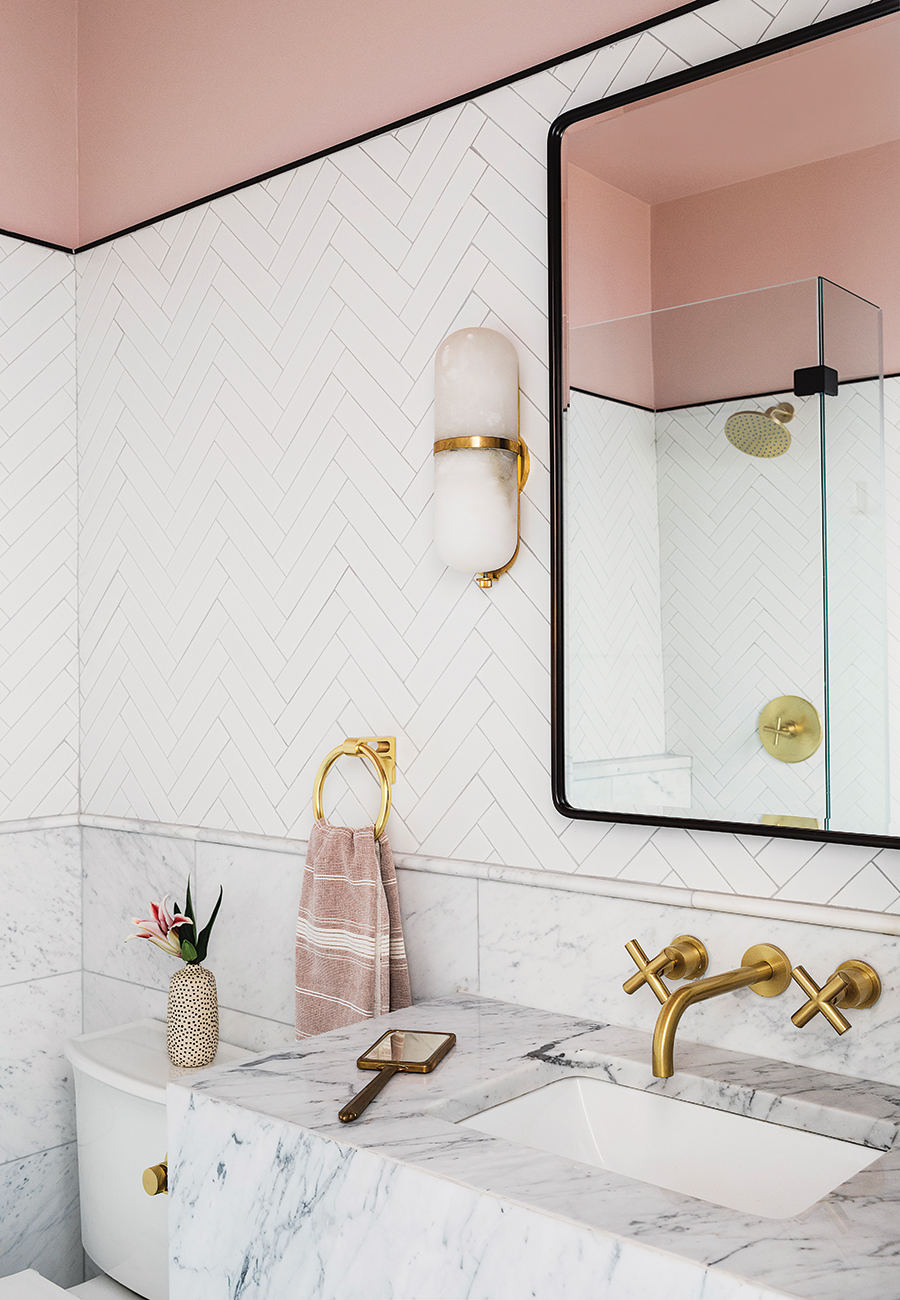 The color scheme of the couple’s bath has a distinctly art deco flavor, as do the sconces by Kelly Wearstler. “The simple shape paired with luxurious materials is a current interpretation of art deco style,” Levine says. / Photo by Joyelle West 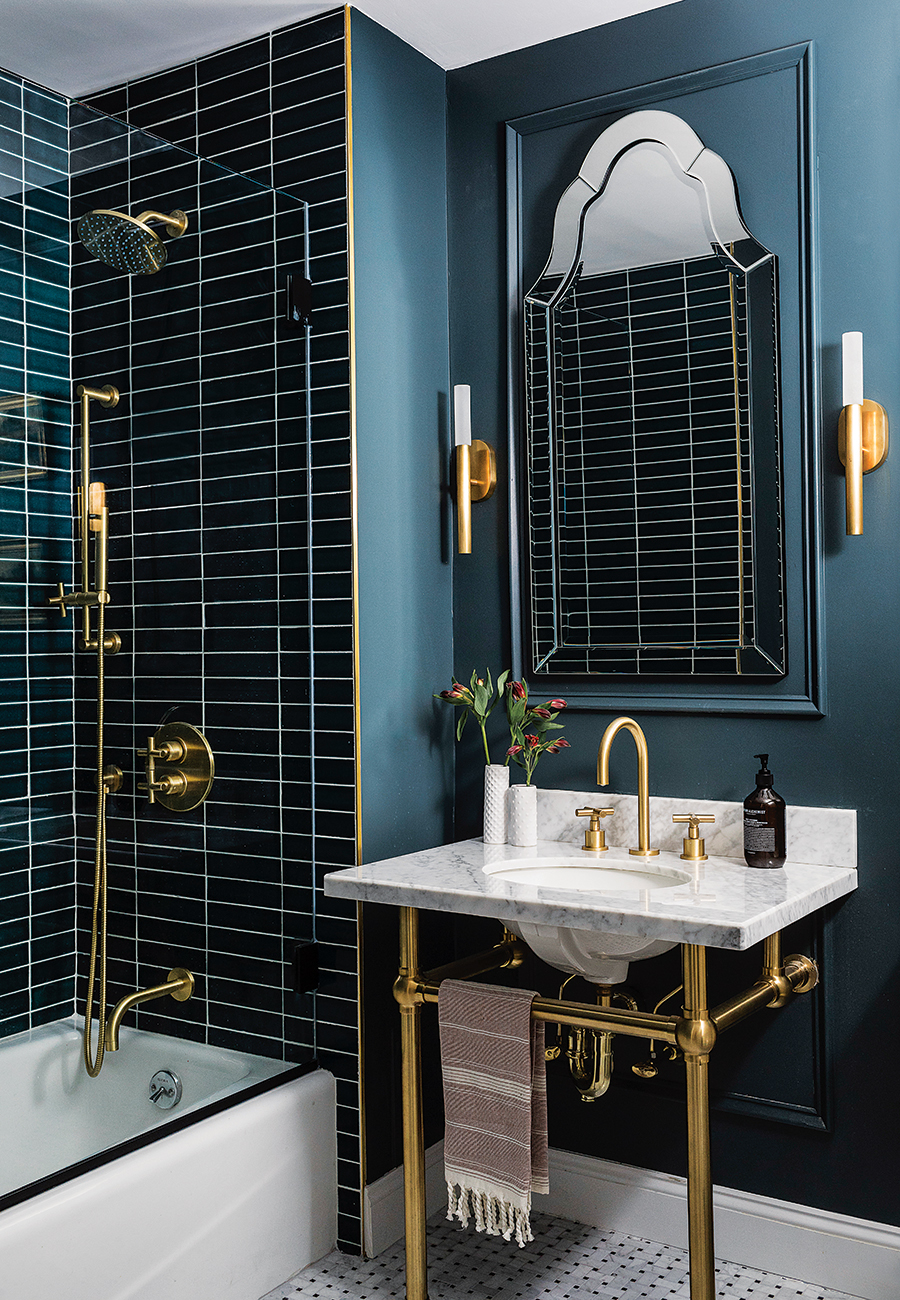 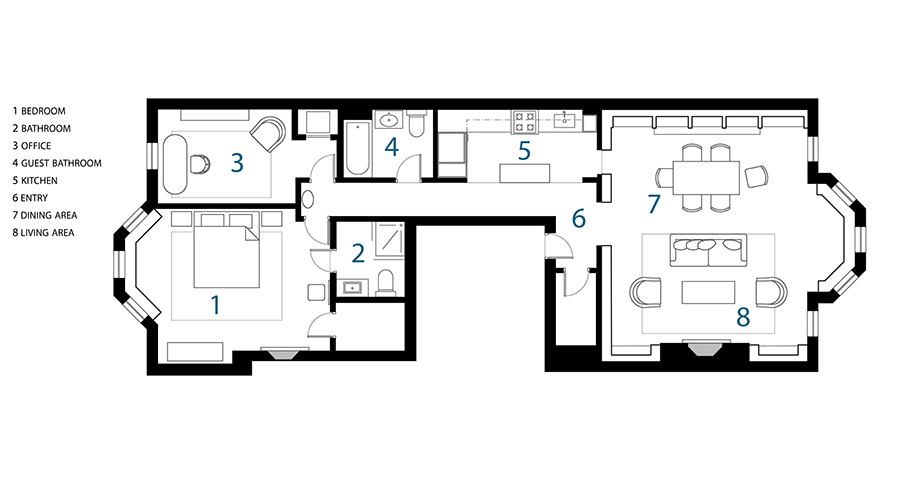