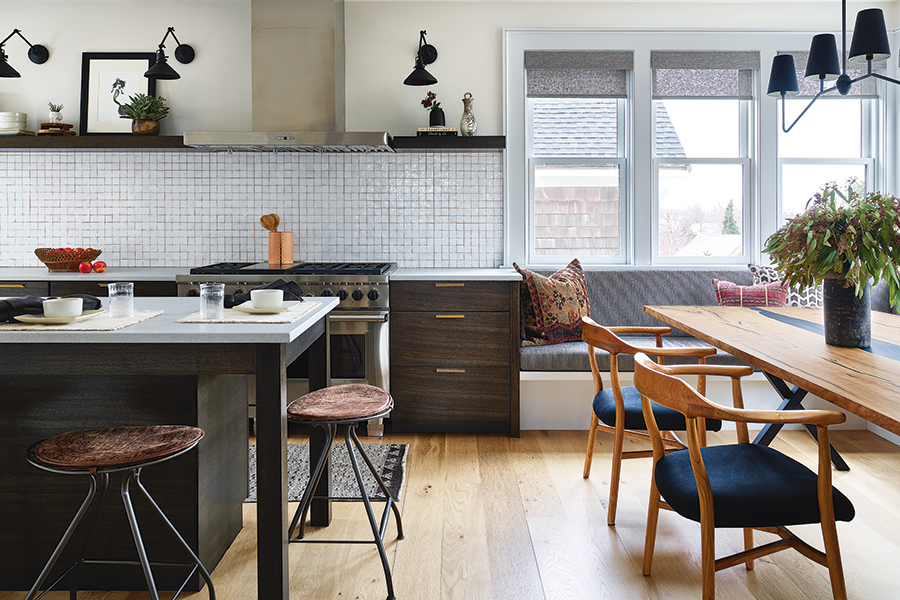 The minimalist range hood drove the placement and thickness of the cantilevered shelves in the kitchen, which also features zellige tile from Ann Sacks. The mermaid ink drawing is by local artist Paul Timmons. / Photo by Jared Kuzia

The Barretts wouldn’t be that family. The one that demolishes a long-standing house on a sleepy street to erect an out-of-character replacement that would make the neighbors groan. Although Renee and Jeff Barrett favor a contemporary aesthetic—the empty-nesters raised their three kids in a midcentury-modern home in Concord—they were too sensitive to make that mistake. “We like design and wanted to have fun, but the neighborhood couldn’t support contemporary,” Renee says.

Instead, they hired architect Zoe McManus and interior designer Holly Gagne to conceive an airy interior within a traditional shell. The new dwelling supplanted a tired house just a block from the harbor on Rocky Neck in Gloucester, an area the couple love as much for its proximity to the water as for its funky, art-colony vibe. McManus designed a modified Greek Revival farmhouse with a wraparound porch that adheres closely to the original building’s footprint. “It was a three-dimensional chess game,” McManus says. Still, she successfully incorporated three bedrooms, a mudroom, and an office into 2,310 square feet. 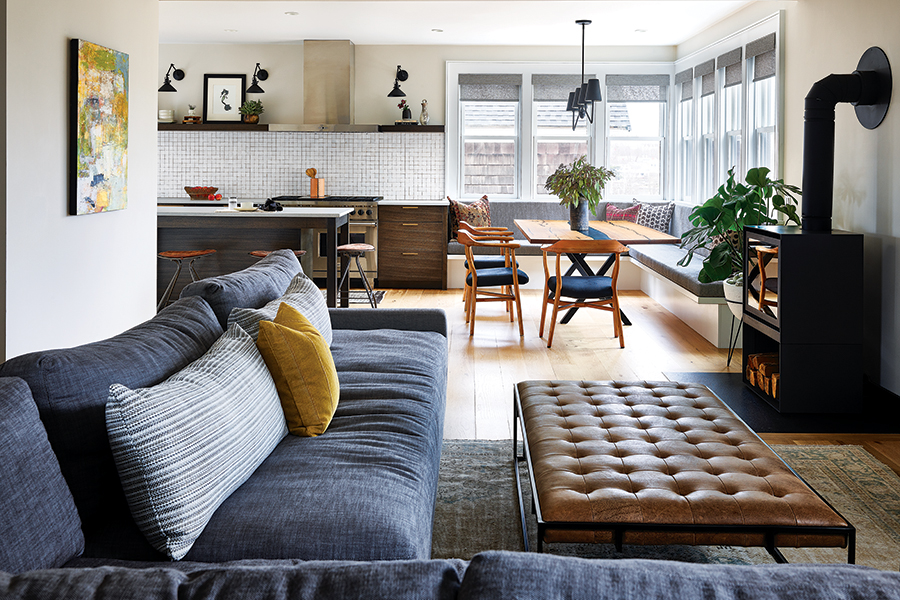 Sourced from Linda’s Barn in Strafford, NH, an Oushak rug provides a neutral pattern in the living area while the abstract painting by local artist Sallie Strand adds a pop of color. / Photo by Jared Kuzia 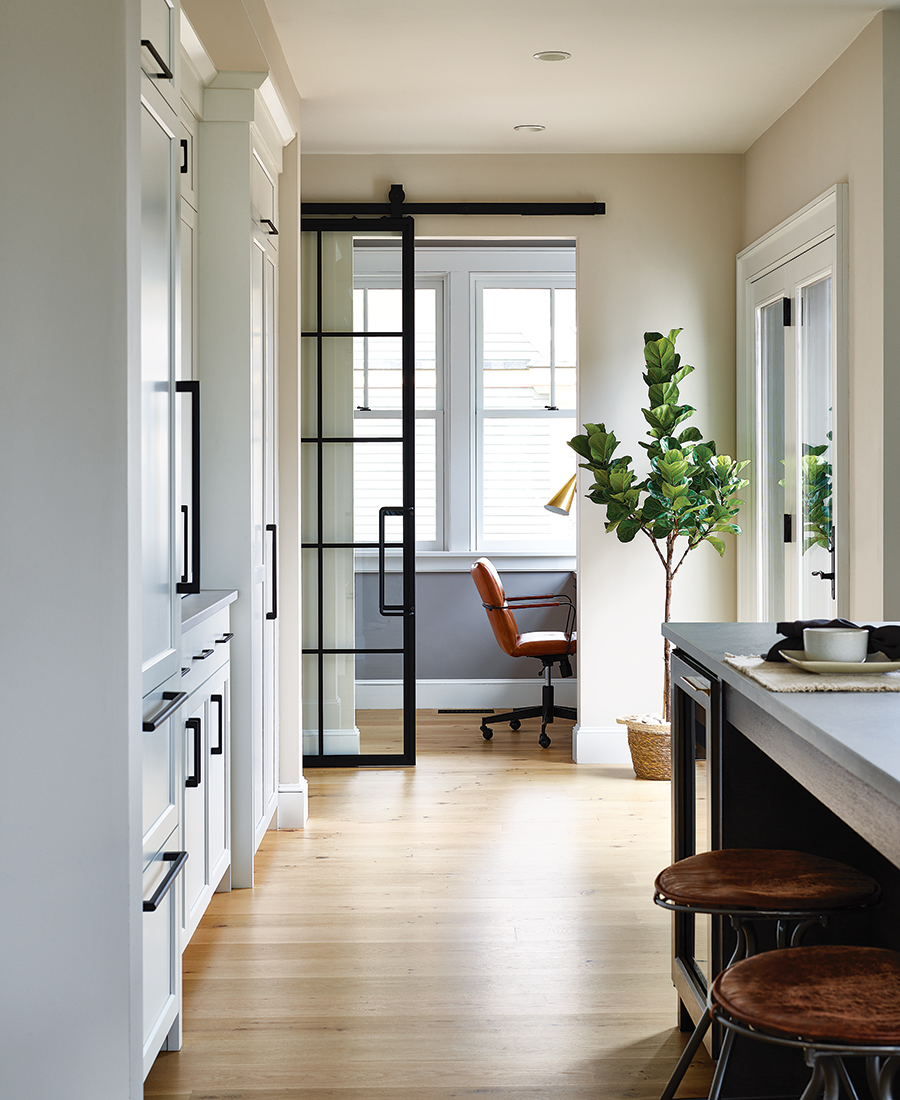 The office’s sliding-glass barn door was a cost-conscious compromise to installing a full wall of glass. / Photo by Jared Kuzia

The result is anything but constrained. The open floor plan flows from the entry, around the central stair, and into the kitchen and living area. “They wanted all the rooms to relate to each other and feel as big as possible,” McManus says. Even Renee’s office feels a part of the action thanks to its transparent barn door. The glass provides privacy without isolation and doesn’t interrupt the natural light. Overall, the house lives large. “We’re a tall family and we feel comfortable in every room,” Renee says.

The design also makes the most of the seaside locale. Windows catch snippets of water views between surrounding homes without staring at their façades straight on. The kitchen’s back wall is solid to avoid an eyeful of shingle, while the office and the dining nook are located in windowed corners with less cluttered sightlines. “You get the ambiance of Rocky Neck,” McManus says. The colors and materials used throughout the home enhance this coastal flavor. “The scheme is inspired by the ocean’s many shades of gray, blue, and green,” Renee says. “I saw an article recently that said ‘gray is out.’ Well, it isn’t if you look out our windows.” 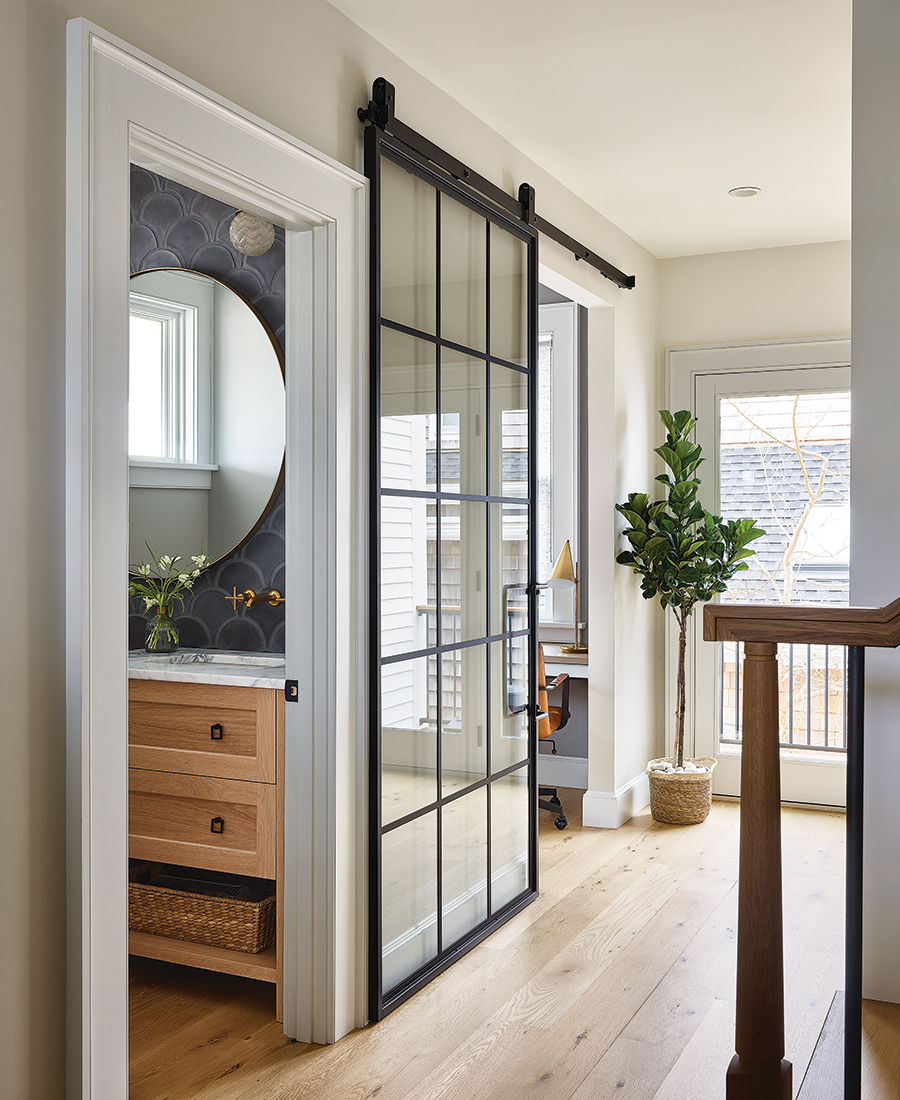 Taking cues from the organic theme and Jeff’s interest in woodworking, the couple chose character-grade, quarter-sawn oak floorboards from a mill in Vermont. Richly stained, rift-sawn oak cabinetry in the kitchen plays off the floors and grounds the space. “The dark color provides contrast and depth, but doesn’t feel heavy since there aren’t any uppers,” Gagne says, referencing the single stretch of shelving on either side of the minimalist stainless steel hood.

A family trip to Italy during the design process informed the backsplash itself. Renee was inspired by the tactile quality of Italian tiles and marbles, which led to the taupe-y gray, hand-glazed terracotta tiles, Gagne says. Renee confides she initially envisioned much more colorful specimens, but that Gagne “gently” steered her toward neutrals. “I enjoy that tile every day,” the homeowner says. “The beauty lies in its imperfections.”

Gagne went neutral with the cushions on the adjacent banquette, too, so that Renee could showcase her collection of colorful pillows made from global textiles. The team commissioned local woodworker Andy Tolliver to craft the dining table using two slabs of Japanese elm connected by a river of dark blue epoxy. The family eats here and also uses the area for working and hanging out. “Pre-COVID, neighbors climbed in to talk and drink wine; it was like the old-fashioned kitchen table,” Renee says.

The living area, just beyond the dining nook, is outfitted with a comfy sectional for lounging. The wood stove, a must-have for Jeff, is the focal point. Gagne balanced the off-center stove with the wall-hung television and a cantilevered shelf. “It looks so simple and obvious now, but we went through so many permutations,” Renee says about the arrangement. A sitting room with a more symmetrical setup that boasts four fuzzy chairs around a rattan table occupies a niche behind the sectional. While there’s no wall between the two spaces, the sitting room feels private. “It’s all about being cozy,” Gagne says. 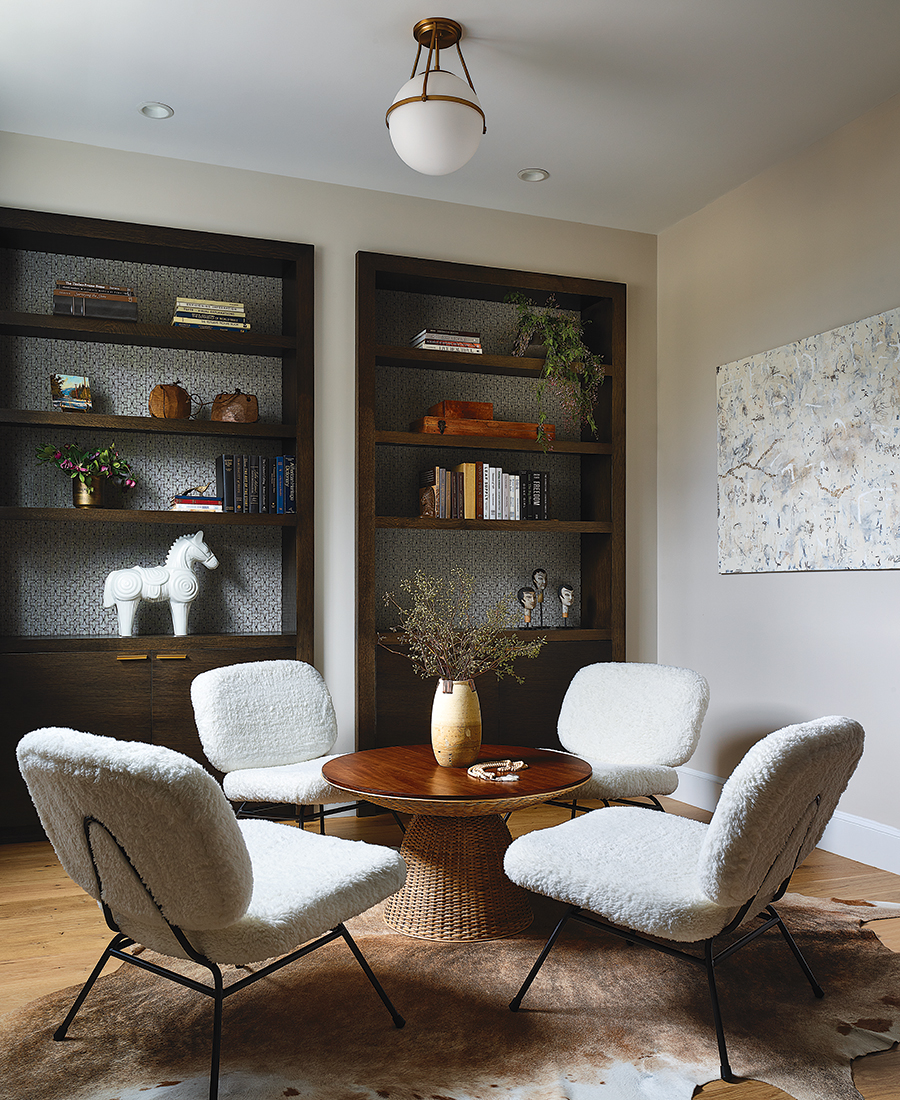 A Phillip Jeffries wallcovering lines the backs of the custom bookshelves in the sitting room, which also features an abstract painting by local artist Nicole Strickland Botto. / Photo by Jared Kuzia 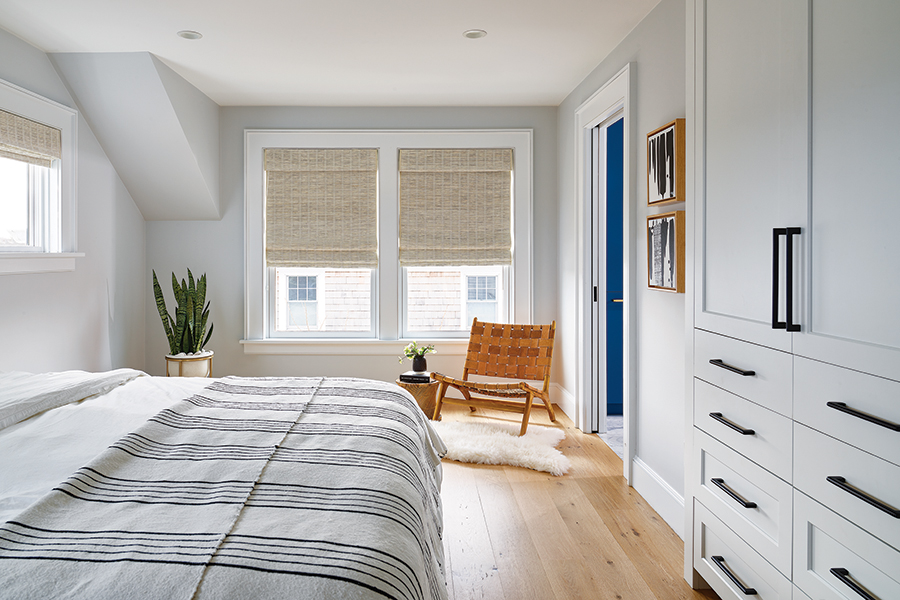 In the couple’s bedroom, woven Roman shades allow privacy from the neighbors and lend a coastal touch. / Photo by Jared Kuzia 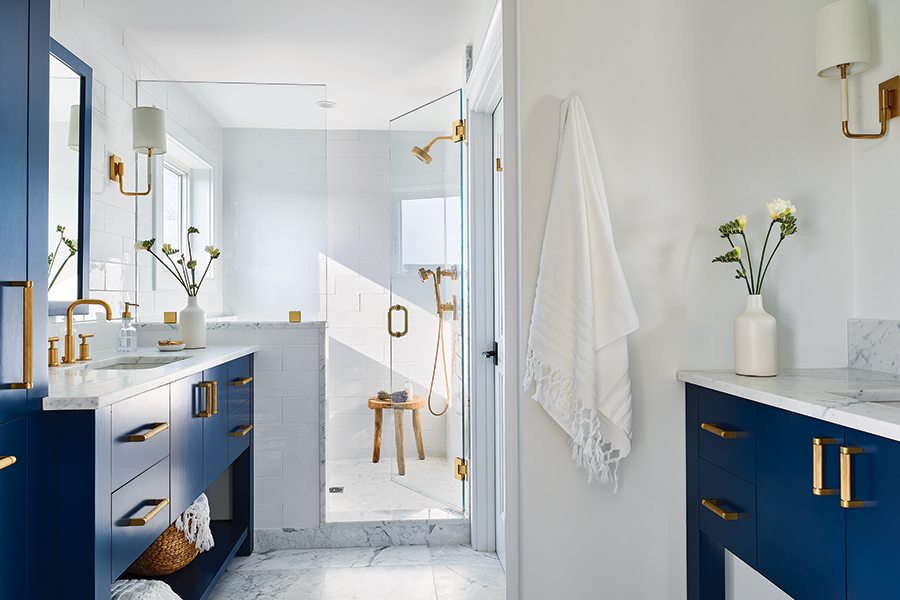 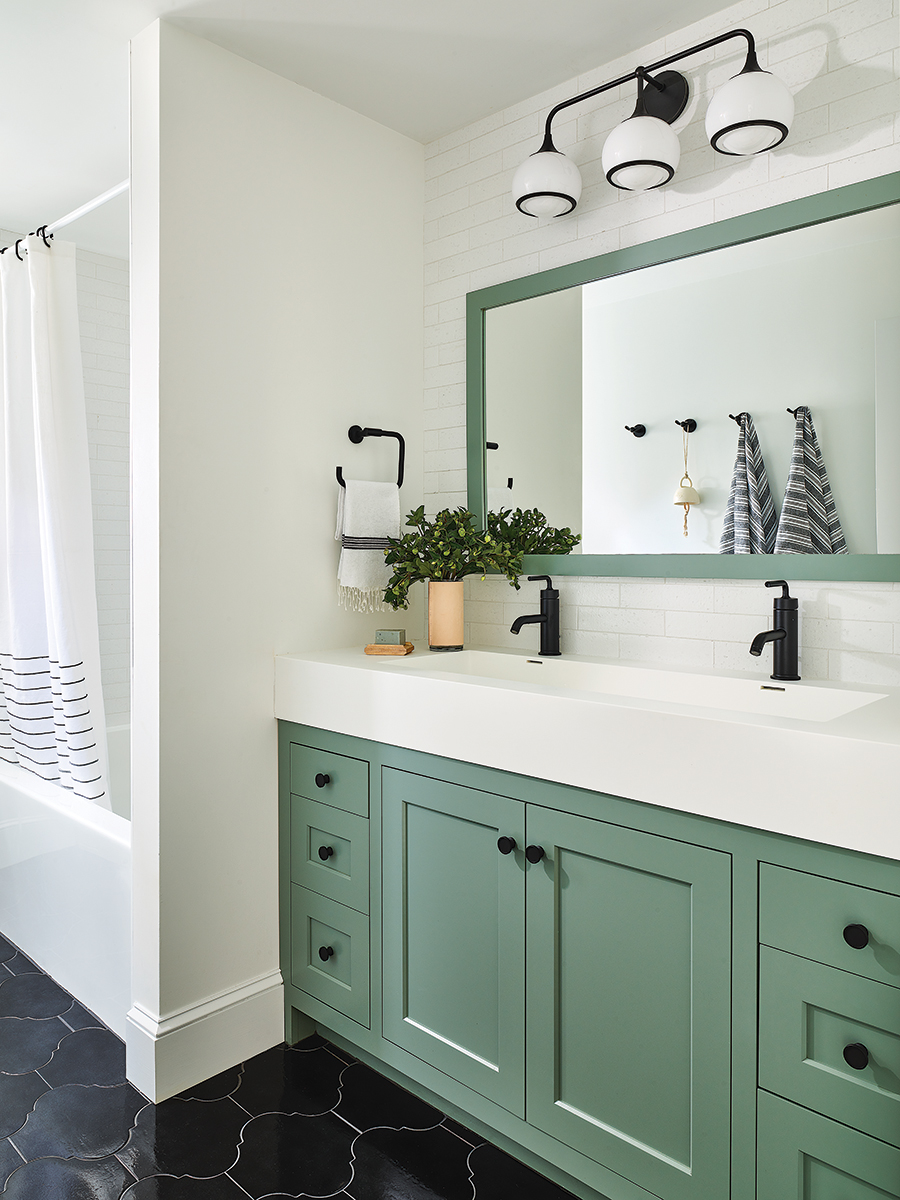 The vanity in the hall bath, also by Newbury Cabinetry, sports coats of Benjamin Moore’s “Rushing River.” “They had fun exploring color in the baths,” interior designer Holly Gagne says of the homeowners. / Photo by Jared Kuzia

For true privacy, the couple retire to their bedroom upstairs. Gagne designed built-ins for efficiency and combined elegant marble surfaces with splashes of blue in the en suite bath. “The punch of color is coastal but not cute,” she says. The hall bath follows suit with a vanity painted green.

The family, who sheltered together in their new home last spring, are delighted with it, as are the neighbors. “The prior owner’s daughter stopped by to see the house and loved it,” Renee says. “That’s a big compliment.” 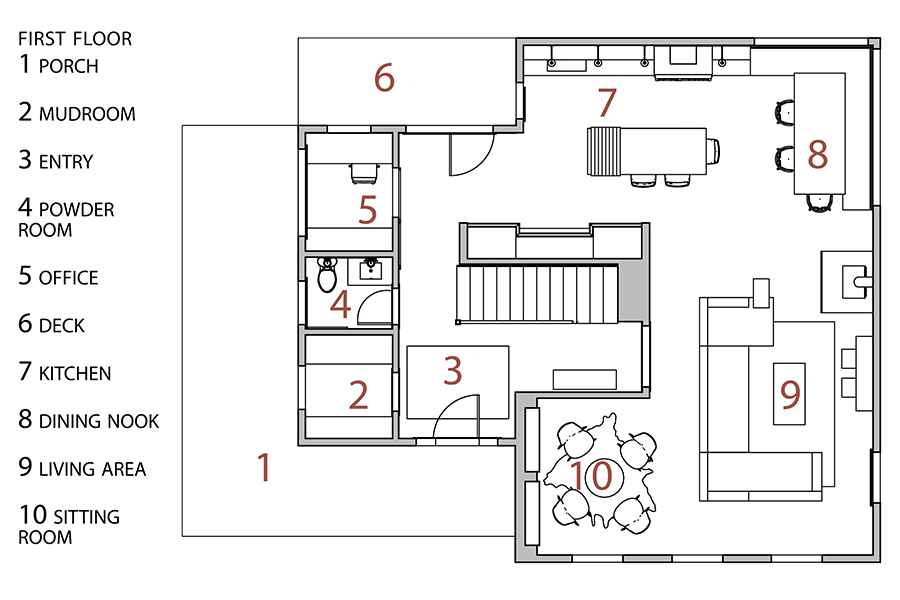 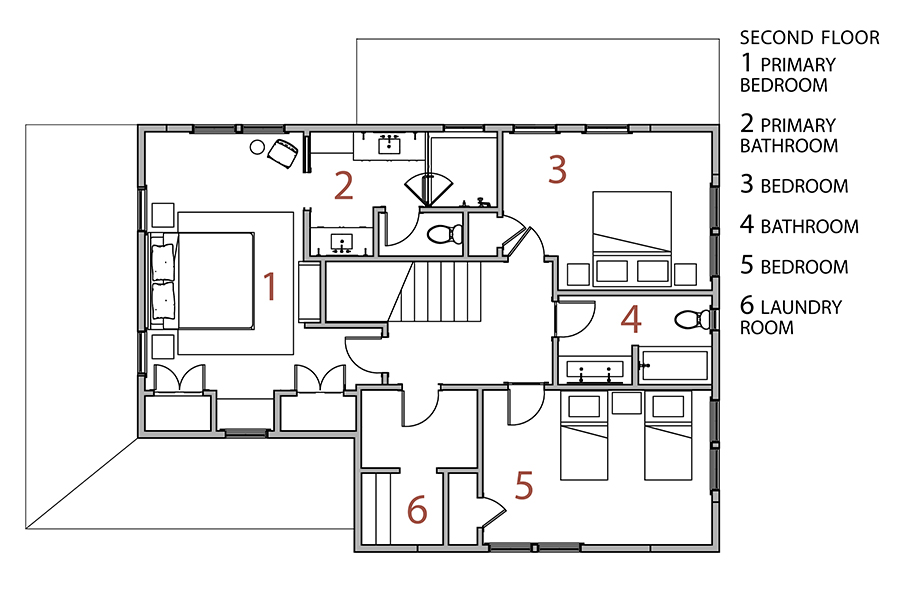