The two Main Street stores were depicted in Rockwell's 1967 work "Home for Christmas." 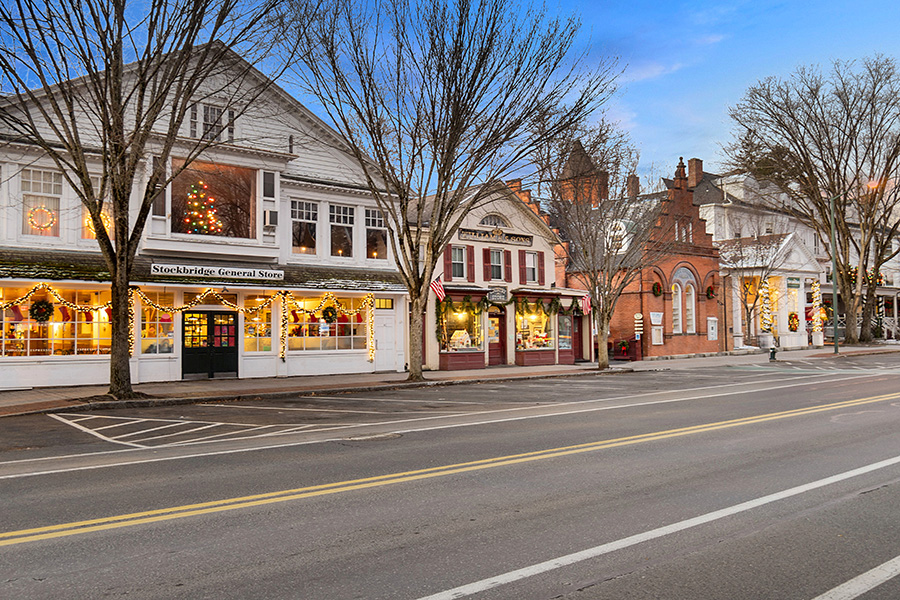 Main Street in Stockbridge, MA has become famous for its portrayal in Norman Rockwell’s painting “Home for Christmas.”/Photo by Rhonda Cyr

It’s a streetscape many know well. Main Street in Stockbridge found its claim to fame as the subject of the iconic Norman Rockwell painting “Home for Christmas.” The town’s tradition of shutting down traffic once a year to recreate the iconic image—vintage cars and all—has helped build its reputation as one of the best Christmas towns in New England.

But while the street may look the same, things are changing behind the scenes. Earlier this month, two buildings depicted in Rockwell’s 1967 piece changed hands for the first time in decades.

Both 44 Main Street, which is the antique shop in the painting, and 36 Main Street, which many may recognize as the country store, were sold in early May. The recent sale of 44 Main Street represents the first time the property’s been sold since it was painted in the 1960s. The three-story 1870 building was sold for $1.3 million earlier this month.

Steven Weisz, a broker associate at William Pitt | Sotheby’s International who represented the previous owners, said they made the decision to sell because no one in the family lived in the area anymore to manage the property. The family used to run the antique shop that occupied the space and which Rockwell himself used to visit.

“They were very sad to sell it,” Weisz said. “It’s very difficult to own a historic building and maintain it if you don’t live in town. They felt it’d be in better hands if they sold it to someone who could take care of it and be local.”

Meanwhile, 36 Main Street, which houses Williams and Sons Country Store and some of the shops in “The Mews,” was bought by Housatonic Realty Co. LLC for $1.8 million. The property consists of 10 units, including six retail spaces, two apartments, one office, and a well-established restaurant. The previous owner, Haldor Reinhorlt, had owned the property for about 46 years, said Elijah Bender, a representative for Housatonic.

However, Stockbridge residents and history owners alike need not fret: both properties are part of the National Register of Historic Places, which means their facades will remain untouched and the town’s 30-plus year long tradition of recreating the scene each Christmas will be preserved.

Weisz said the antique shop at 44 Main Street has since been split into two spaces, which now house a real estate and insurance office and a gift shop that sells vintage curiosities and locally produced goods. In the upstairs spaces are an acupuncturist and local yarn shop. All tenants will remain, except the real estate office, which had been considering consolidating before the purchase. They will be replaced by a chocolate shop run by the new owners, Weisz said.

“Quite frankly, why would you want to [change it]?” Weisz said. “It’s absolutely beautiful…The new owners don’t intend to make any changes. As long as it’s maintained properly, it should look exactly the way it is in Norman Rockwell’s painting.”

Bender said Housatonic, which has a number of historic properties in their portfolio, plans to carry on in the tradition of the previous owner and maintain the long-time tenants who’ve been at the property.

“He’s a terrific guy,” Bender said of Reinhorlt. “We’re long-time preservationists ourselves and we have an eye for historic properties. We plan on keeping the same tenants and plan on sprucing up the property while keeping its historic roots. It’ll look every bit as slick as it did in the picture.”

Main Street in Stockbridge, MA has become famous for its portrayal in Norman Rockwell’s painting “Home for Christmas.”/Photo by Wayne Tremblay 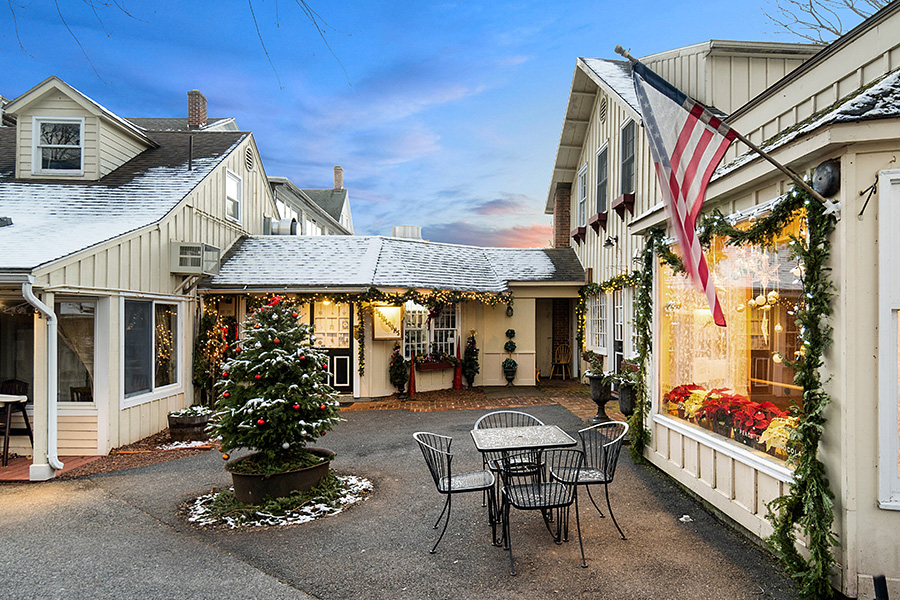 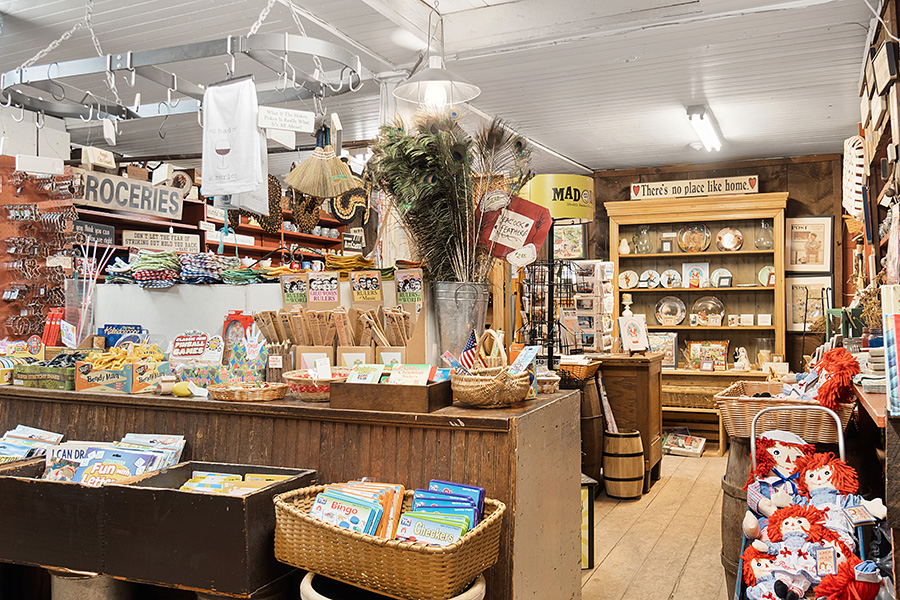 One of the retail spaces at 36 Main Street still houses the country store portrayed in the Rockwell painting. / Photo by Rhonda Cyr 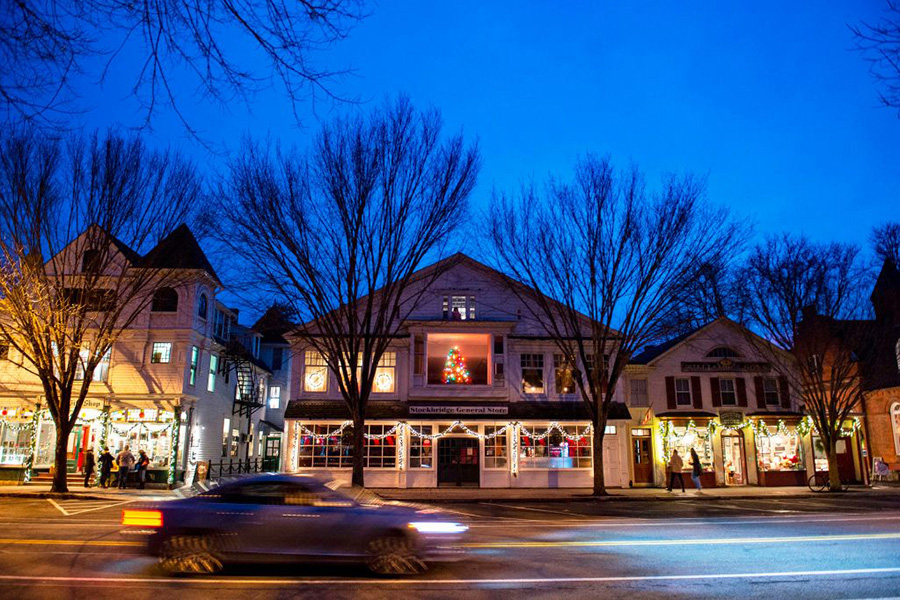 A car drives by a decorated Main Street in Stockbridge, Massachusetts on December 13, 2020. Photo by Joseph Prezioso / AFP/ Getty Images