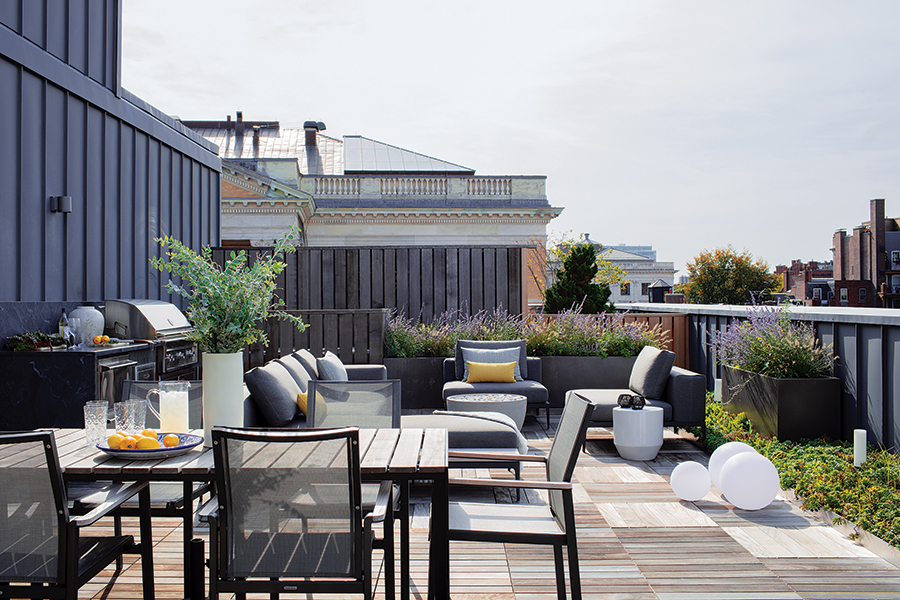 Accented by white-cedar fencing and lush grasses, a sectional upholstered in Sunbrella fabric from Design Within Reach and a Paloform fire pit anchor a lounge area on the terrace. / Photo by Michael J. Lee

For a software company exec with three children, the search for a new home entailed not only finding a retreat from his own non-stop work life, but securing a comfortable space for his entire family. “I wanted a design that was very fluid and open, with common areas that invite gathering,” he says. On the other hand, privacy was key: “My three kids are all of an age where they value their personal space, so it was also important that they could each have their own bedrooms,” he adds.

After some six months of property hunting, he found a few promising options on the top floors of a condo building on Beacon Hill. But before he put in an offer, he reached out to Studio Watt O’Keefe, a Cambridge-based architecture/interiors firm with which he’d teamed up previously on his company’s former Copley Square office. He wanted to know: Was it possible to merge three separate units to build the home he envisioned for his family? For principals Belinda Watt and Michael O’Keefe, who visited the partially complete spaces and helped him strategize, the answer was a resounding “yes.” 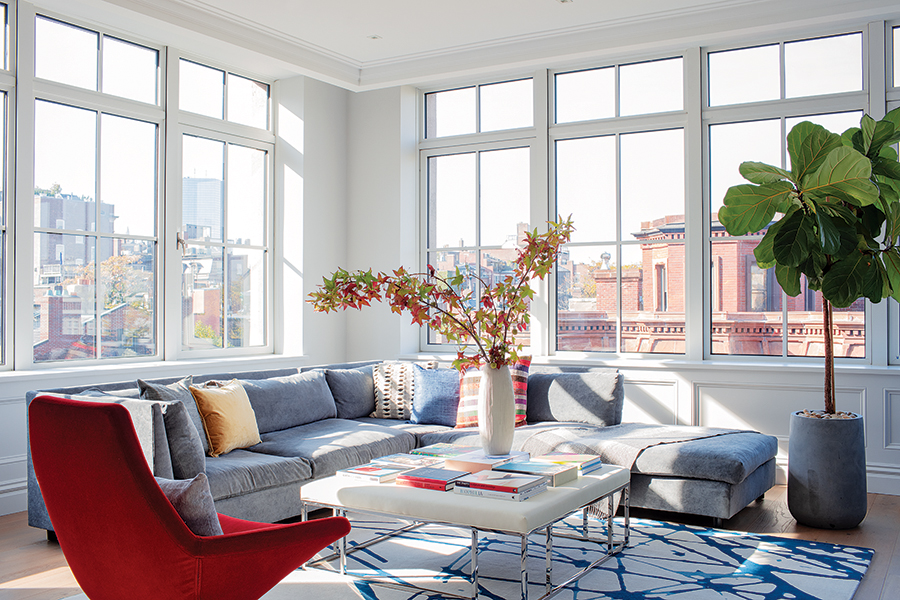 A sectional and an ottoman from Mitchell Gold + Bob Williams mingle with a B&B Italia side chair and a graphic rug from the Rug Company in the sun-filled living area. / Photo by Michael J. Lee

And so, with the advice of his trusted collaborators, the exec purchased a three-bedroom unit on one floor and also portions of two penthouses upstairs. Watt and O’Keefe, of course, were hired to help him unify and reimagine the units, which together clock in at 3,600 square feet. “By taking both penthouse options and combining them, [we were able to] create a much more private space [that] gave him the four bedrooms he needed,” Watt says.

When it came to the other structural flaw the group needed to address, the matter felt familiar to all parties involved. Much like the former 19,000-square-foot Back Bay office Watt and O’Keefe renovated for the owner’s company in 2011, the units’ existing floor plans allowed for little flow of natural light. “We needed to open up the interior and get in as much light as we could,” O’Keefe says. On the lower level, for example, that meant eliminating a bathroom that sat in the center of the layout and replacing it with a wet bar. Open to the living area and kitchen on one side, and to an inviting media room on the other, the new piece helps ensure sunlight travels freely throughout the space. 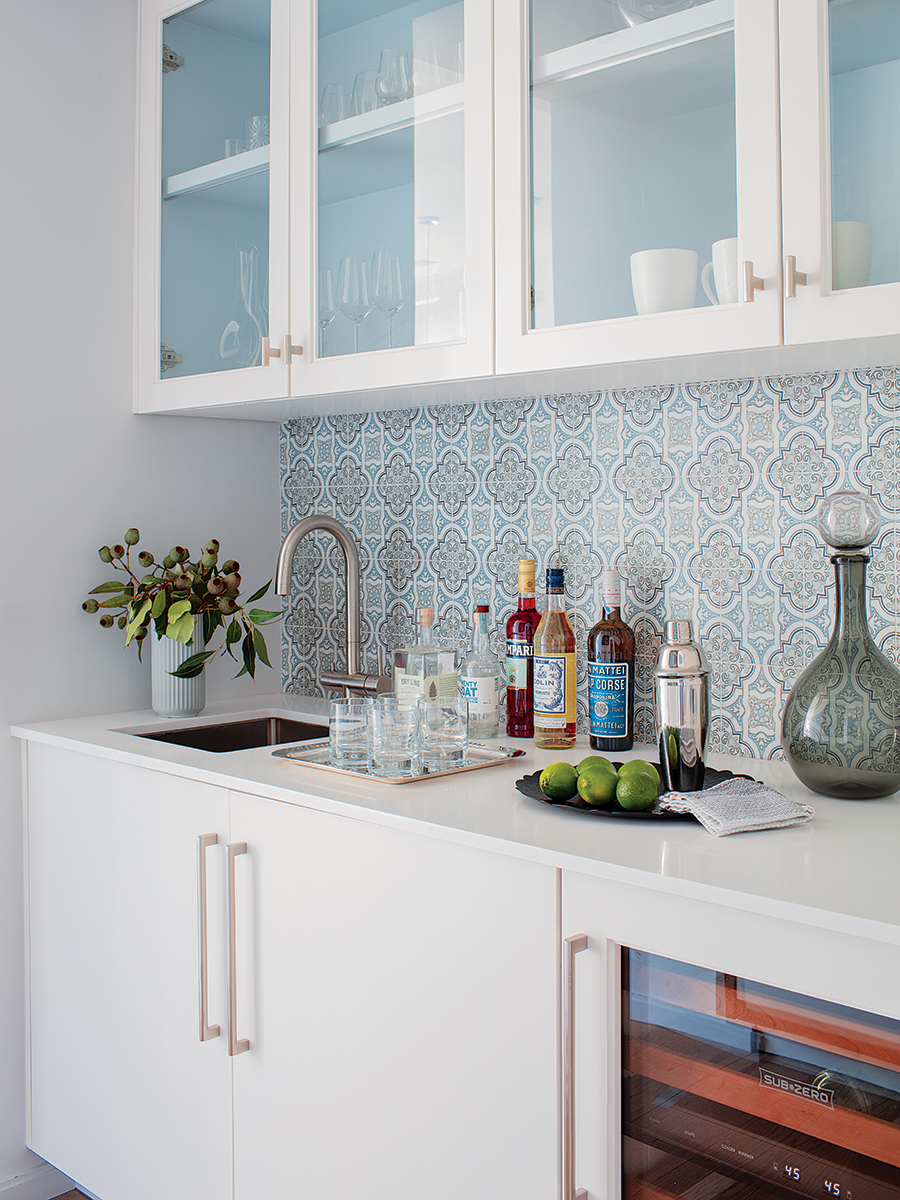 The wet bar at the center of the lower level features painted walnut cabinetry, a Caesarstone countertop, and a backsplash crafted from honed Carrara-marble tile. / Photo by Michael J. Lee 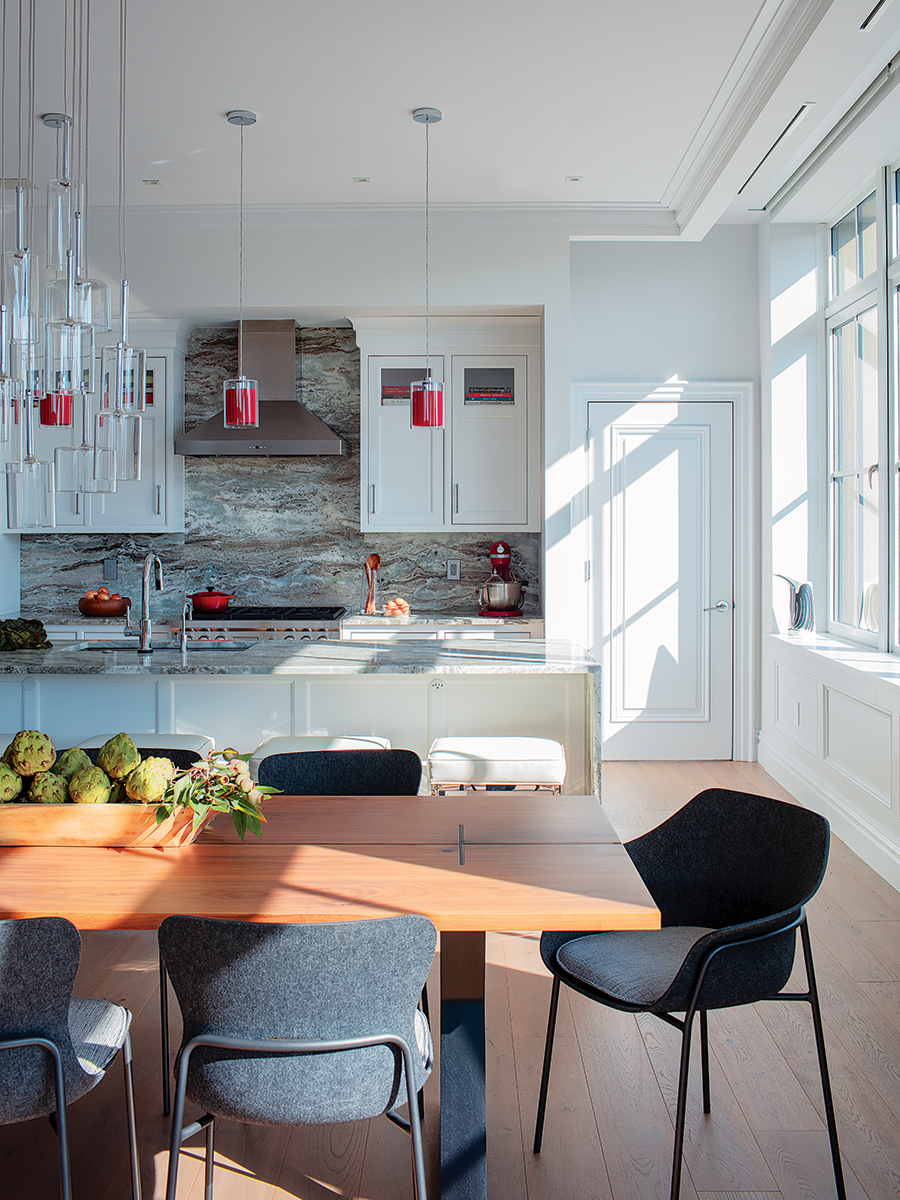 After failing to find a table that worked for the size of the dining area off the kitchen, the team decided to collaborate with A.M. Design and Fabrication and Jeff Pizzi Furniture and Cabinetry on a custom piece, ultimately creating a steel-and-walnut number that they could assemble on-site. / Photo by Michael J. Lee 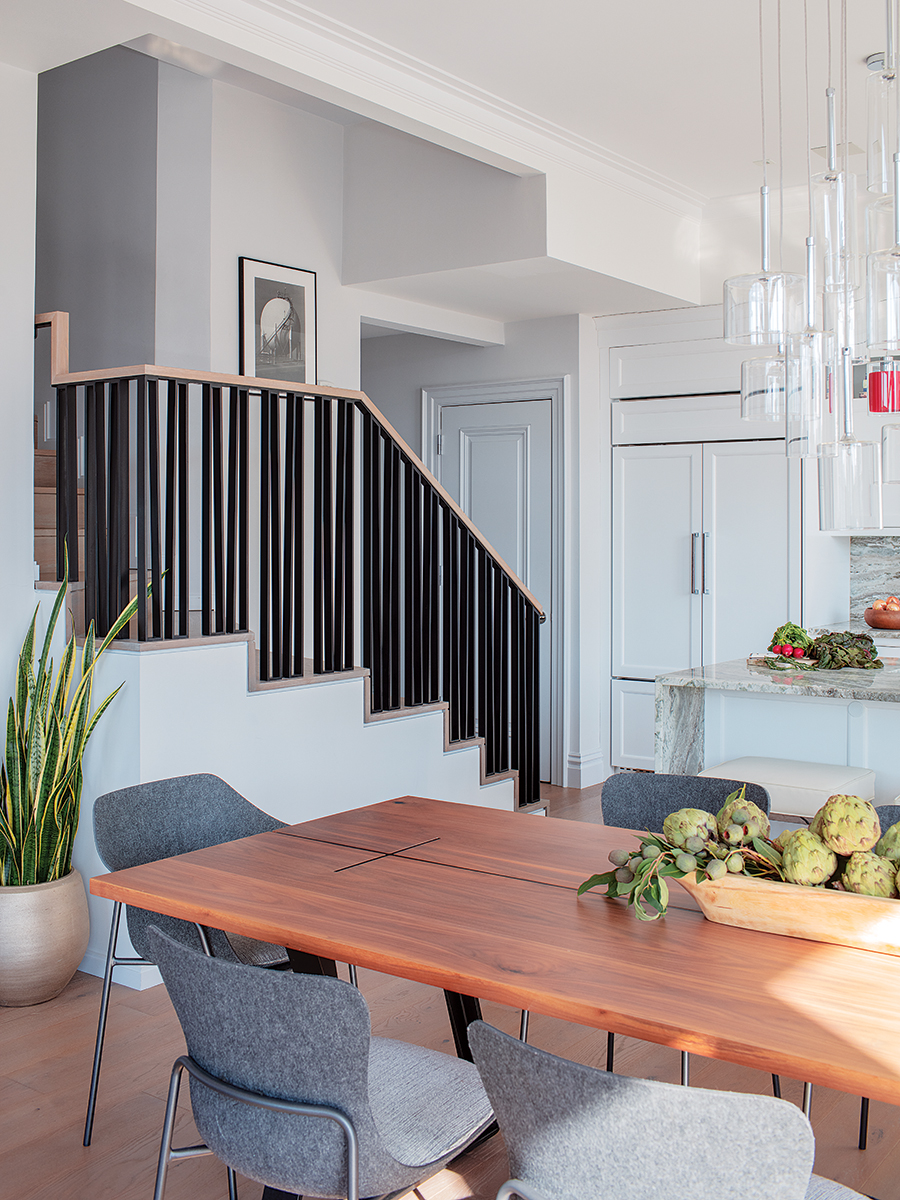 Built by Ty Crowley of Metalart, the staircase’s black-steel balusters complement the nearby dining table, while the white-oak handrail matches the stair treads. “We wanted [the staircase] to be clean and straightforward,” principal Michael O’Keefe says. / Photo by Michael J. Lee

As for dressing up the reconfigured abode, the architects drew inspiration from the owner’s proclaimed design aesthetic (“modern with clean lines, while still being comfortable and inviting”) and worked to pair streamlined architecture with calming hues, natural materials, and organic prints. Cue the home’s white-oak floors, custom walnut built-ins, and eye-catching yet unfussy furnishings. “This was [meant] to be a refuge from his office life. So that drove us to create a quiet, subdued space with a restrained palette,” O’Keefe says.

Still, there were plenty of opportunities for fun, too: The owner’s fondness for graphic wallcoverings also influenced the design, particularly in each of the home’s bedrooms, where papered accent walls act as large-scale artwork. In the primary bedroom, for instance, an array of cascading leaves on an azure wallcovering from Trove serves as the backdrop to a Ligne Roset bed. “We’d always known that we wanted the back wall to be dramatic, so from pretty early on we talked about how it should be a really dark blue,” Watt says. 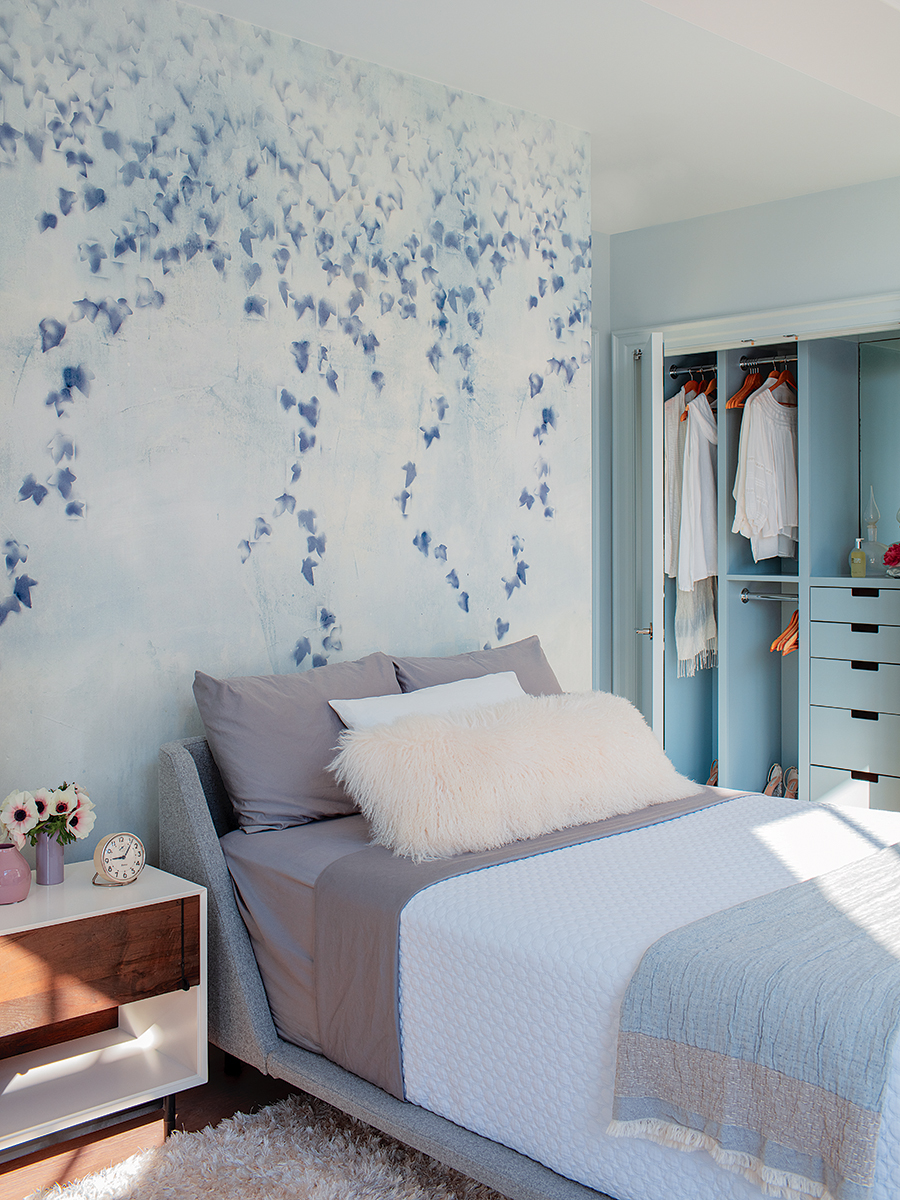 Adorned with a Trove wallcovering that mimics the print installed in the primary bedroom, the daughter’s sleeping quarters also sport a Blu Dot bed. / Photo by Michael J. Lee 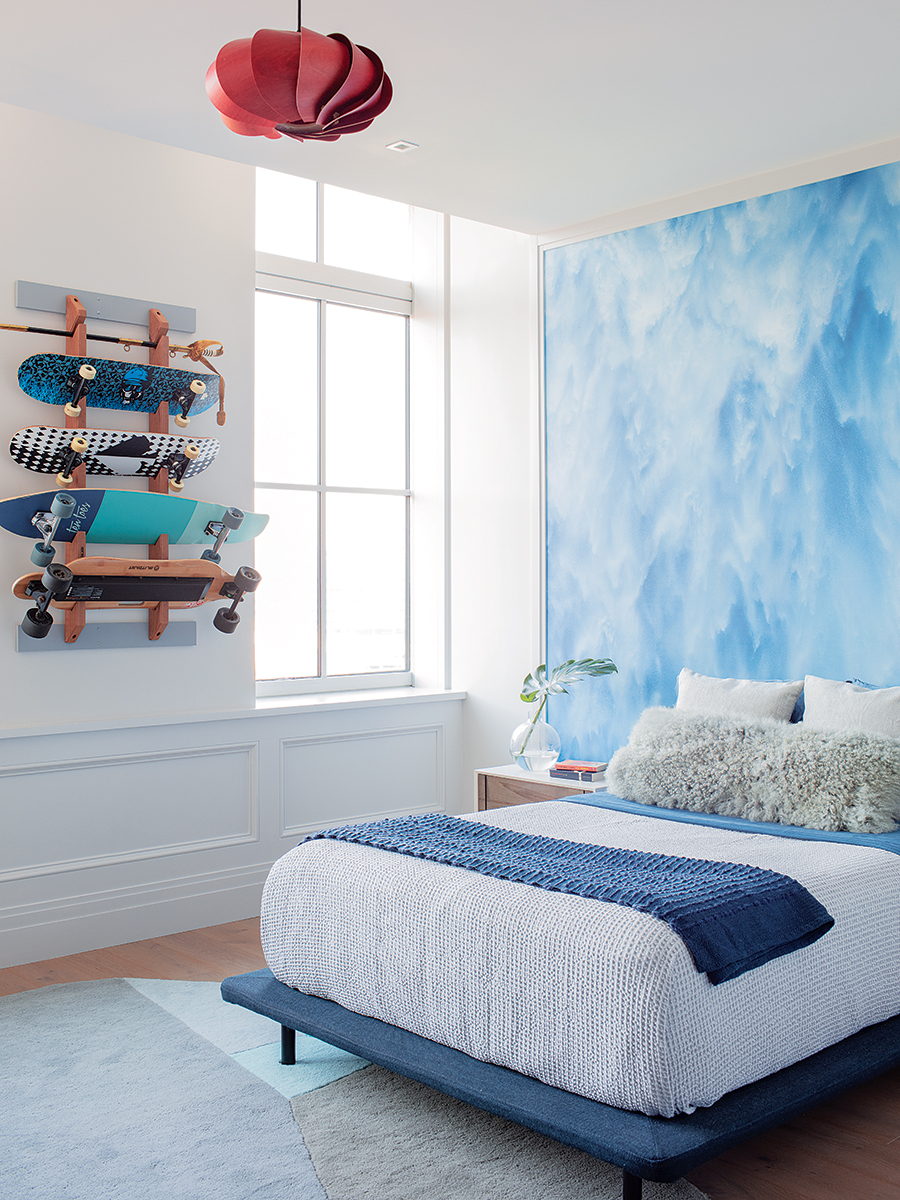 A red pendant light by MacMaster Design offers a playful touch in one son’s bedroom. / Photo by Michael J. Lee 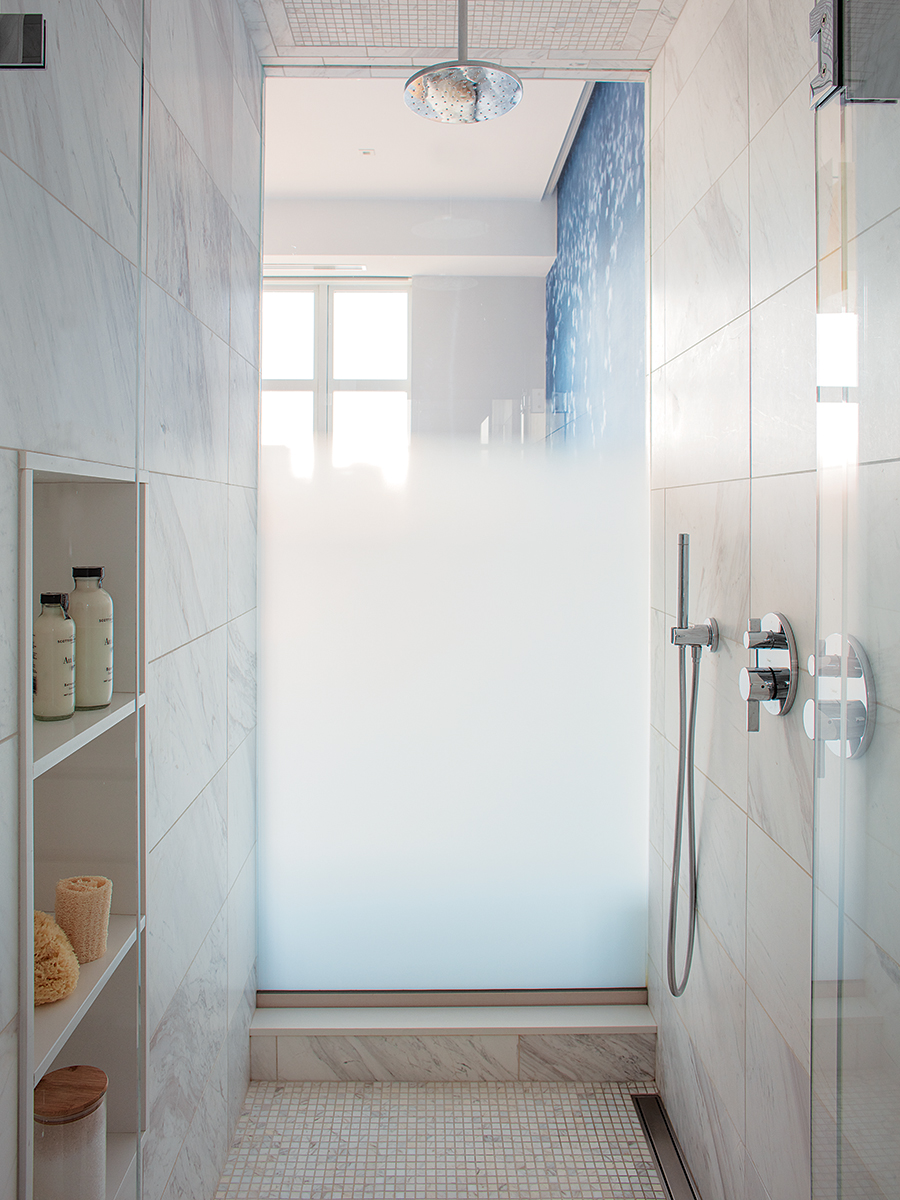 Scenes of Beacon Hill fill the primary bathroom thanks to the partially frosted, tempered-glass panel that offers a visual connection to the adjoining bedroom. “[We wanted] to have long views in these deeper spaces,” O’Keefe explains. / Photo by Michael J. Lee 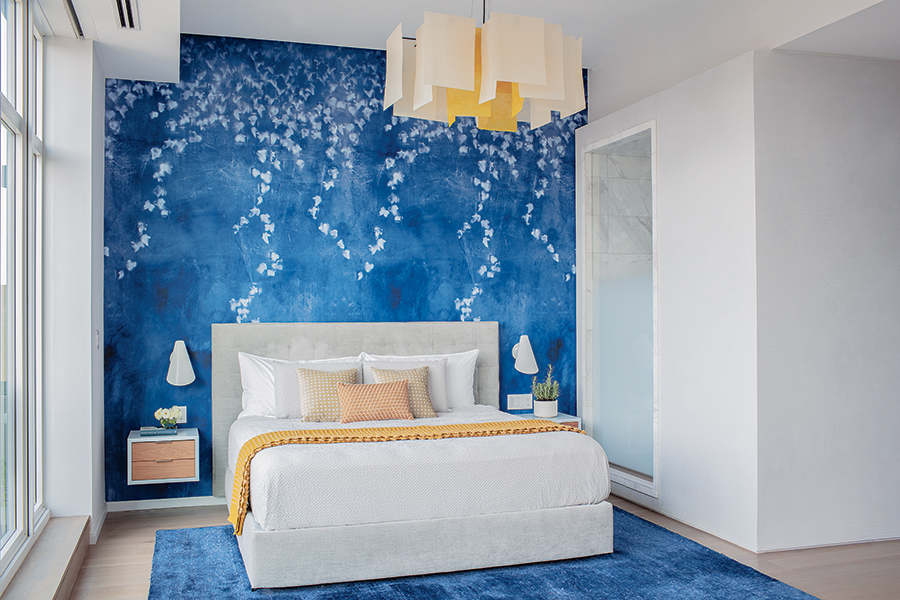 Composed of thin fiberglass sheets, a light fixture by Enrico Franzolini hangs above the bed in the primary bedroom. The architects, along with JD Custom Woodworking, also created bespoke wall-mounted nightstands with walnut drawers for the space. / Photo by Michael J. Lee

While the print is no doubt a showpiece, it’s certainly not the only jaw-dropping aspect of the home’s second level. Simply step out onto the 1,300-square-foot terrace from the primary bedroom or the neighboring family room, and it’s easy to see why the owner wanted to get his hands on the entire western portion of the roof, which was previously bifurcated by 7-foot-high lattices. “[It’s an] outdoor living room,” O’Keefe says. “It’s very private but you also have this expansive city opening up in front
of you.”

Working with landscape architect Kaki Martin, of the Klopfer Martin Design Group, the team divided the al fresco space into two zones: an outdoor kitchen, dining area, and lounge centered around a fire pit just outside the family room, and a more intimate spa area with plush chaises and a copper hot tub beyond the bedroom. “[The owner] loved the idea of copper,” Watt says. O’Keefe agrees. “It’s a great contrast with the ipe-wood decking and dark-gray surrounding walls,” he says. Lush landscaping including lavender shrubs and a variety of grasses, meanwhile, adds to the visual appeal.

Of course, while the finished outdoor area appears perfectly put-together—much like the rest of the “elegant but livable” dwelling, as the owner puts it—it’s certainly homey enough for children, too. Overall, the family adores their new digs. “The [kids] set up soccer nets [on the terrace] and they love using the hot tub,” Watt says. “It’s nice to see them make the space their own.” 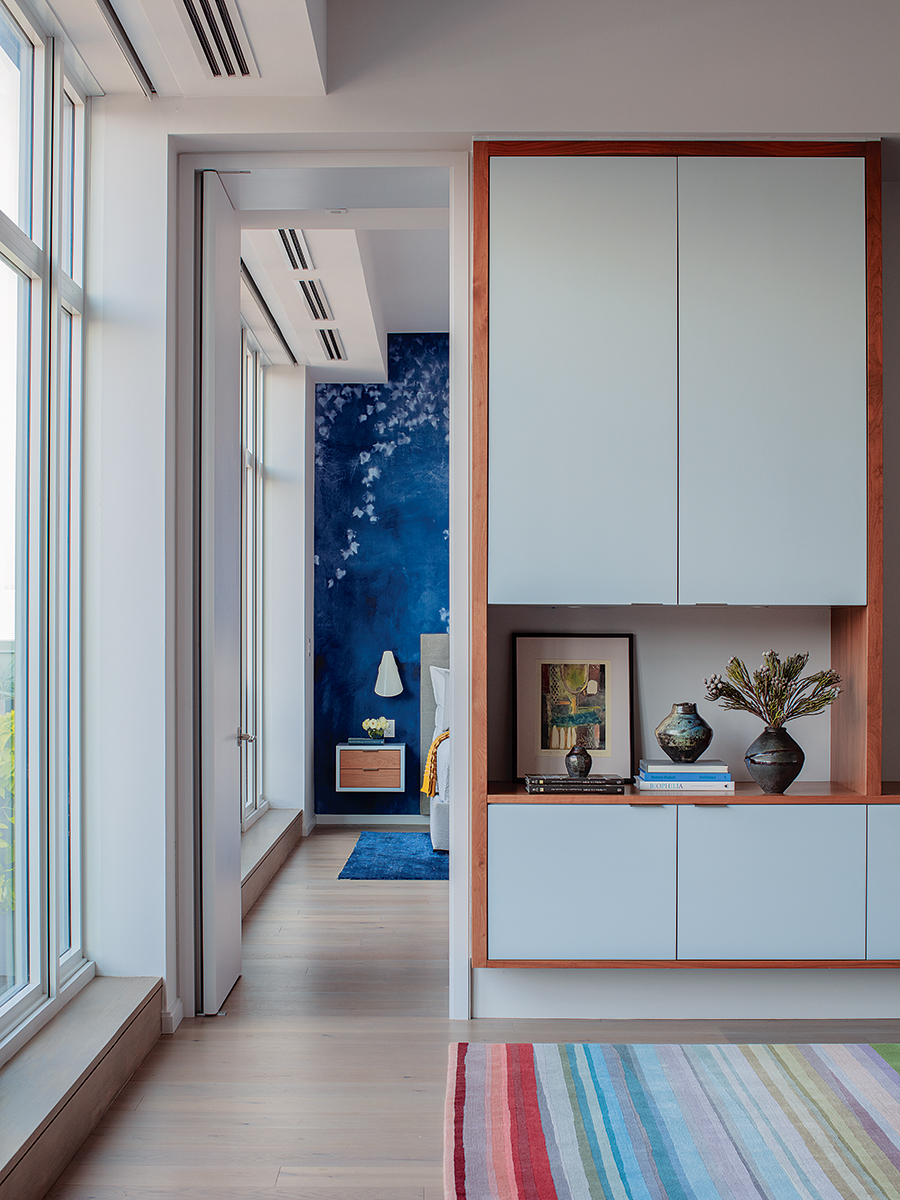 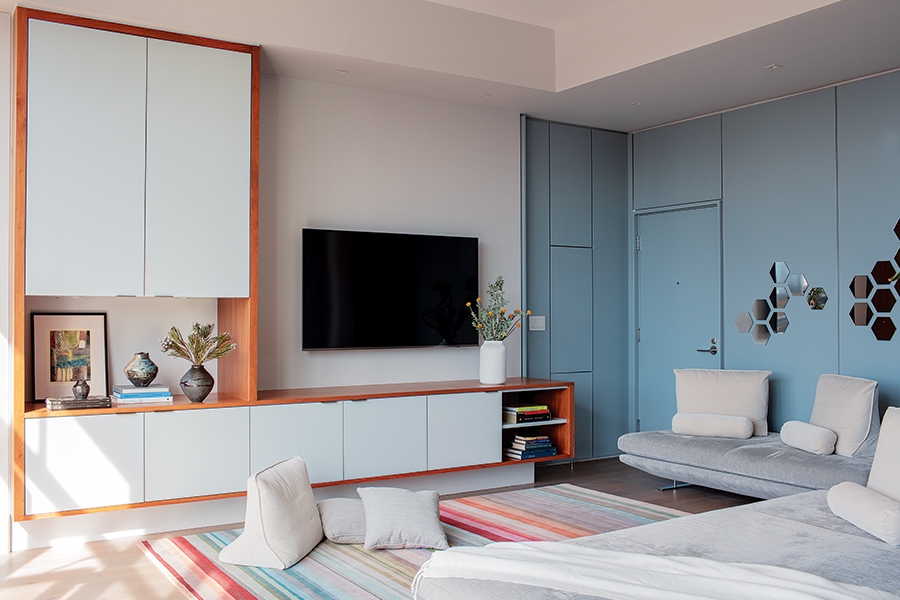 Connected to the terrace via glass doors, the family room provides a casual gathering place with a Ligne Roset sectional and a Paul Smith Rug from the Rug Company. / Photo by Michael J. Lee 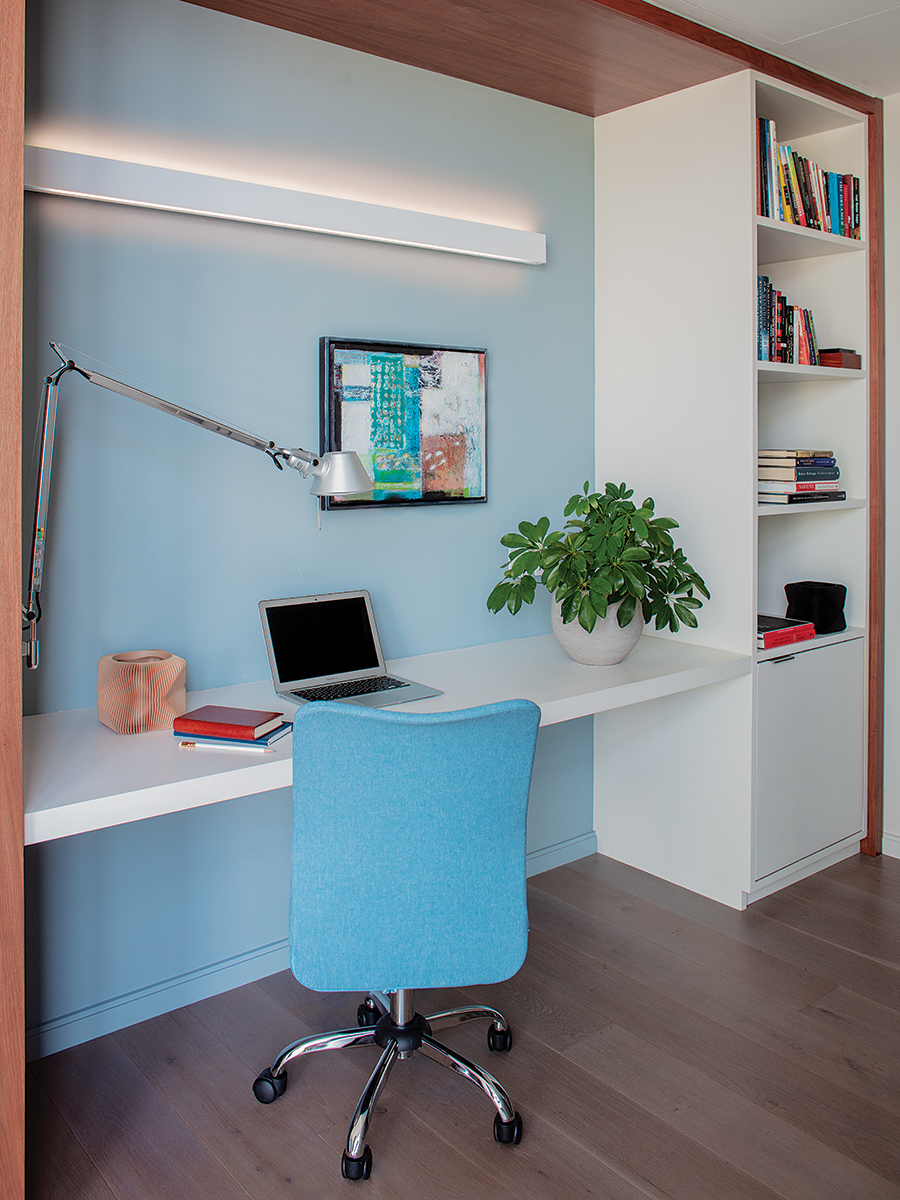 For the study at the top of the stairs, JD Custom Woodworking designed a desk—lit by both a mounted LED light and an Artemide lamp—and shelving. / Photo by Michael J. Lee 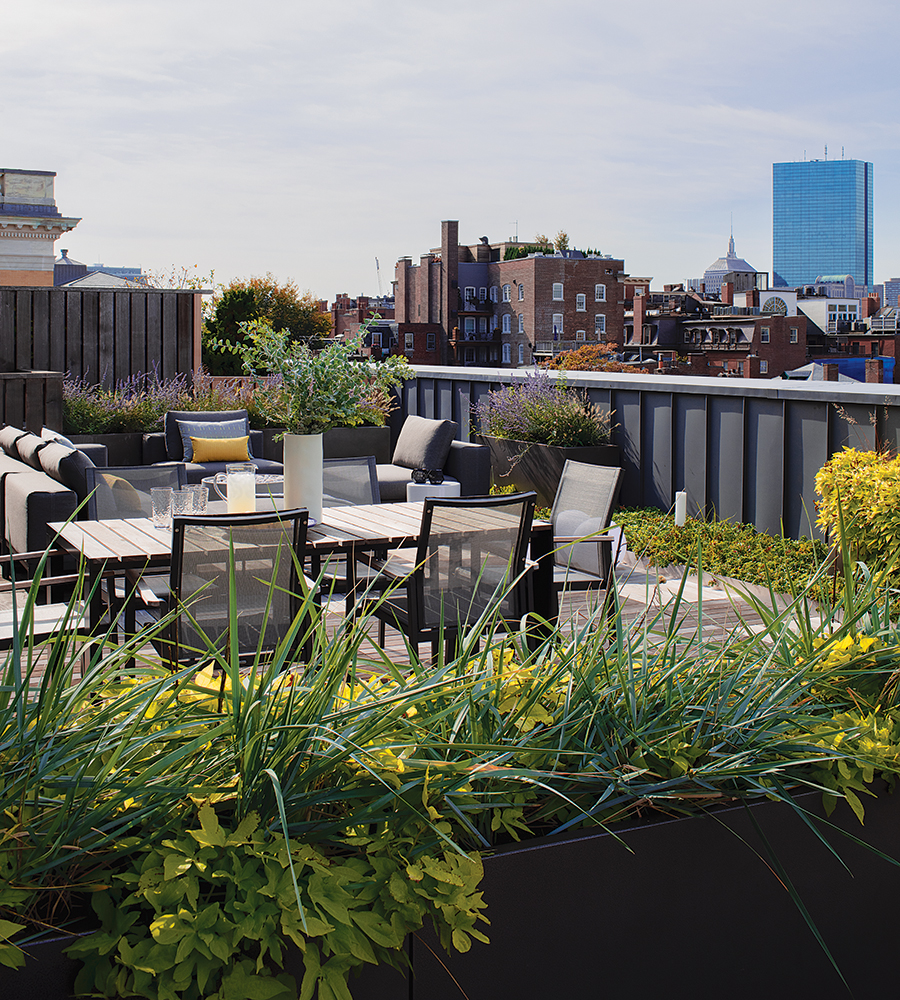 The family often enjoys meals on the ipe-wood deck courtesy of a teak-and-aluminum table from Design Within Reach. / Photo by Michael J. Lee 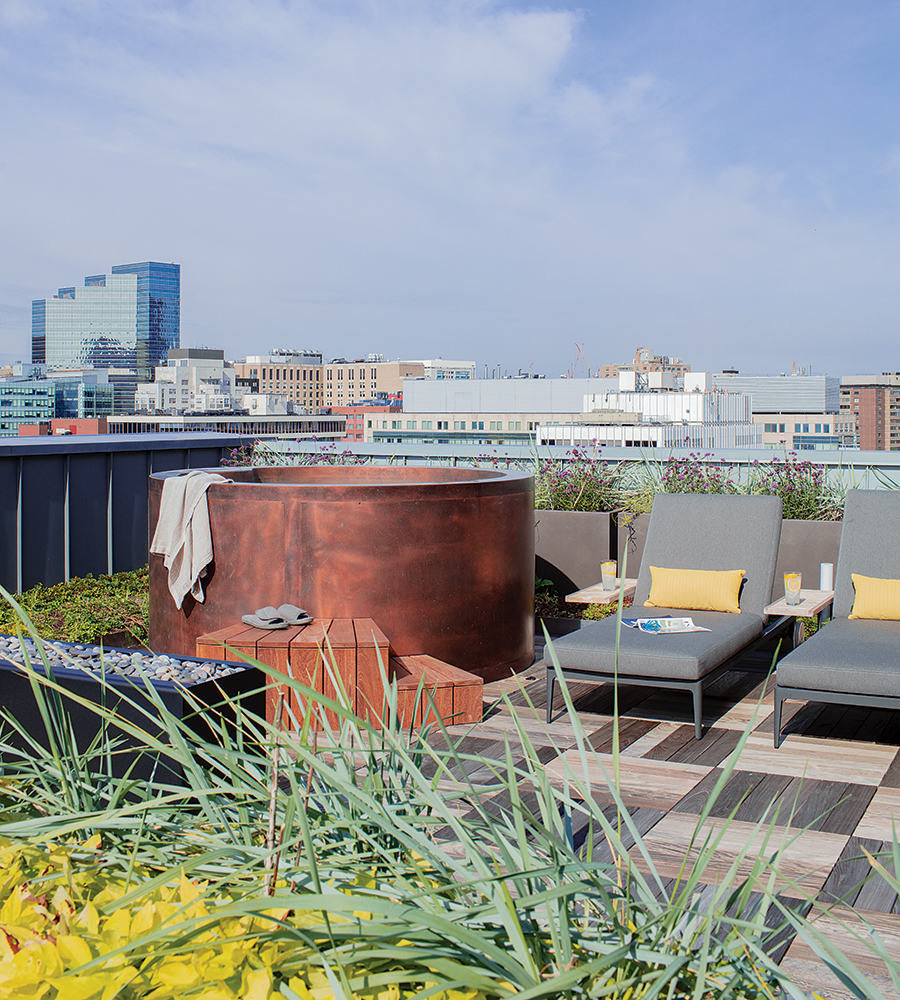 Dreamed up by Studio Watt O’Keefe and built by Zen Associates, a set of ipe-wood steps lead to the one-of-a-kind copper hot tub designed by Diamond Spas. “The tub has proven to be a great escape even in the colder months,” the homeowner says. / Photo by Michael J. Lee 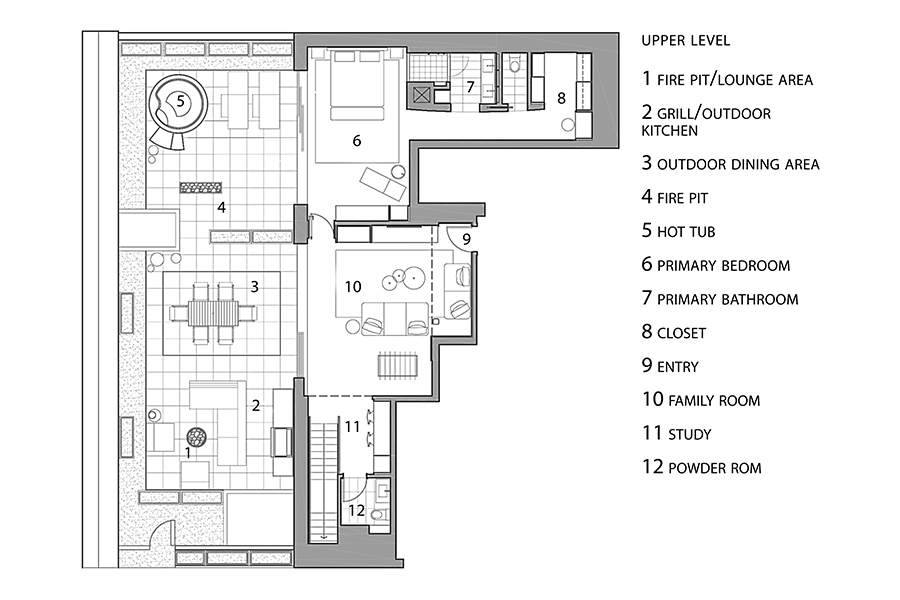