This 1920s Nantucket House Went From Dated to Designer 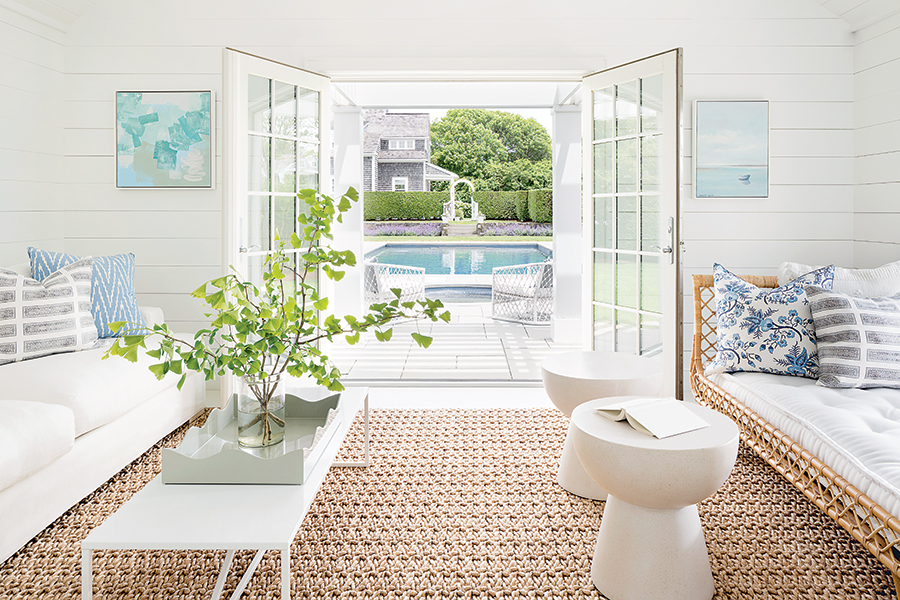 In the pool house/guest suite, the gentle blues and greens of artist Shannon Coppage’s abstract painting (left) mirror the water outside. Elizabeth Sabine’s seascape, hung on the other side of the doorway, evokes the nearby ocean. / Photo by Read McKendree/JBSA

From a real estate perspective, the 4,883-square-foot Colonial in a coveted neighborhood on Nantucket checked all the boxes for a young family of five who had recently relocated to Connecticut: pool, guest house, close to the water, and within biking distance to town. Inside, however, the cedar-shingled house “desperately needed a breath of fresh air,” interior designer Tharon Anderson says.

So the wife, who grew up on the island with Anderson, engaged the pro to give it just that. “Tharon knew exactly what I’d want in a Nantucket house,” she says. “Light, bright, and easy, [with] storage for rain jackets, life preservers, and all the other stuff that comes along with kids and the outdoors.” Beyond that, she told Anderson, “You do your thing,” recalls the designer.

The dark mahogany floors throughout the house were the first order of business. When the plan to sand and bleach them was foiled—Highland Floors Refinishing said the planks, which the team originally thought were cherry, would turn pink—they switched gears and advocated for painting them white. The suggestion came with a caveat: “I told [the wife] that painted floors would expand, contract, and collect scratches and cracks,” Anderson says. The owners didn’t hesitate. They had lived in a dark apartment in New York City and thought, “Just bring in the white!” the wife says.

Ten coats of white paint later, the floors are downright luminous and set the tone for the casual-cool vibe of the house. Anderson drew inspiration from the wife’s effortless personal style. The designer took the essence of her look—white T-shirt, jeans, and a great piece of jewelry—and blended it with “beach house for a young family,” Anderson explains. 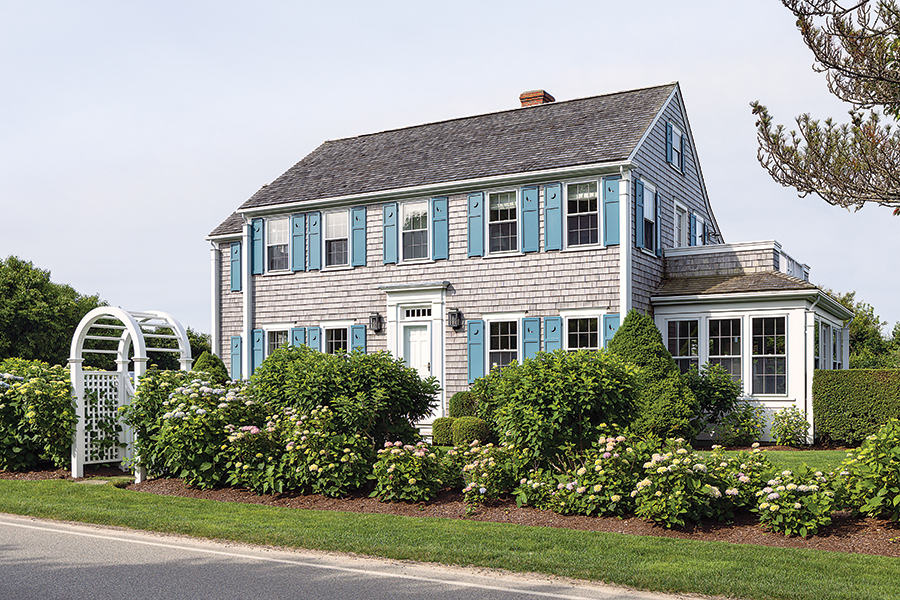 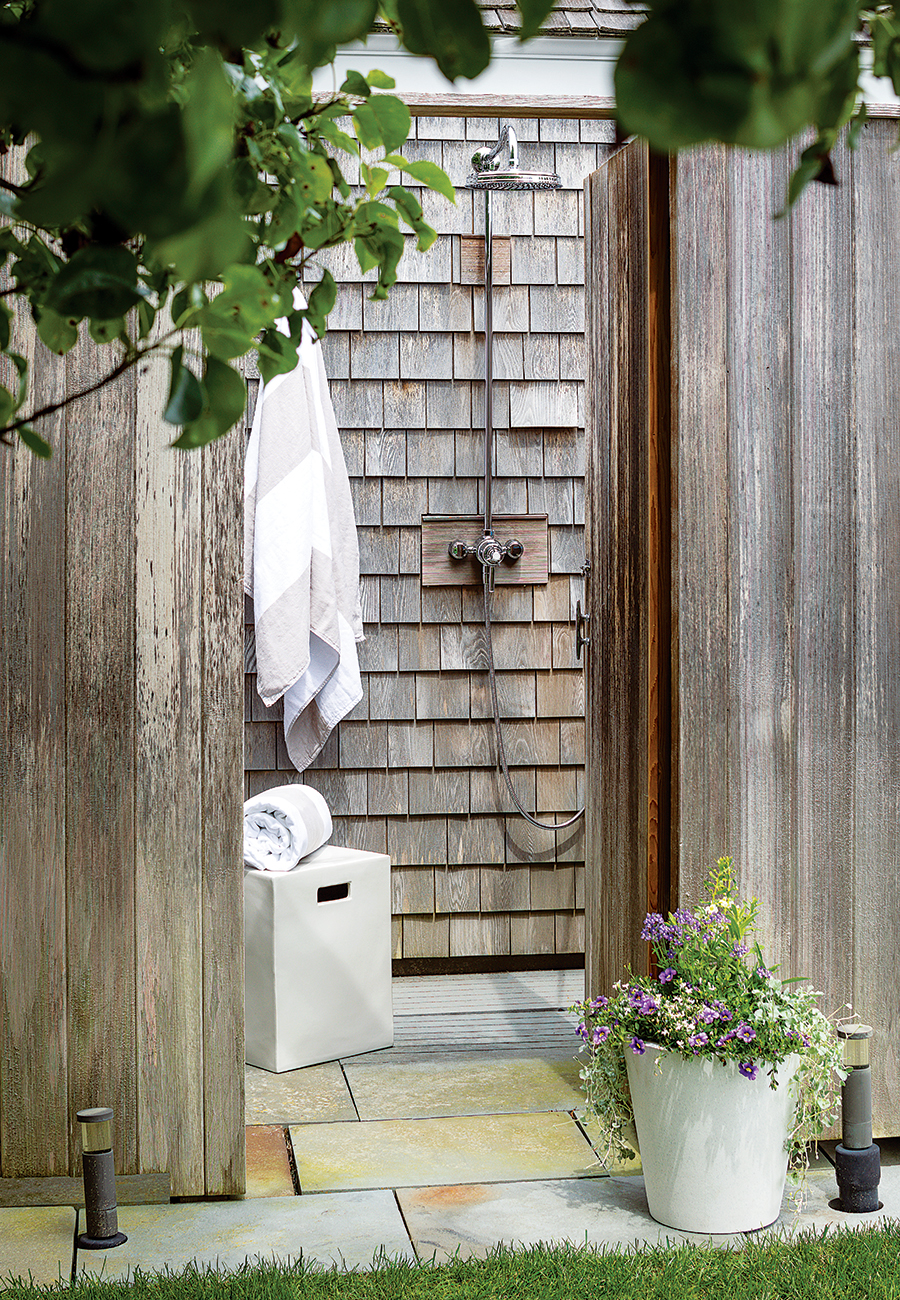 An outdoor shower is a must when you have three little kids at the beach. “We spend 70 percent of the day outside,” the wife says. / Photo by Read McKendree/JBSA 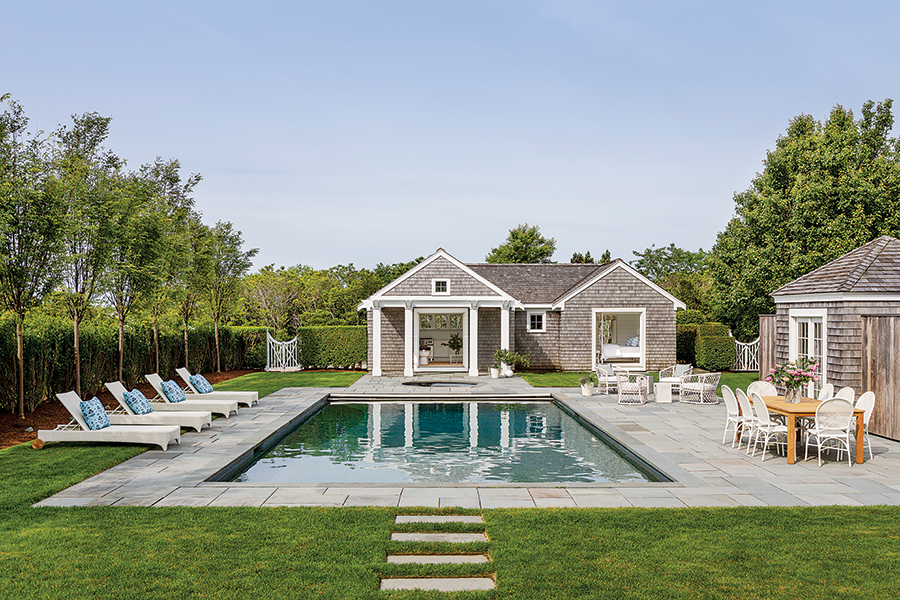 Bistro-style Made Goods chairs in faux rattan surround a teak Kingsley Bate table on the patio, while woven-acrylic loungers from Serena & Lily comprise a comfy seating area beyond. On the other side of the pool, pillows in the project’s signature blue tones top chaises, also from Kingsley Bate. / Photo by Read McKendree/JBSA

The result is a white backdrop studded with natural fibers and understated blues. It’s Nantucket, “so the palette had to be blue and white without being blue and white,” Anderson says. Her trick? Adjusting the hues; periwinkle, robin’s egg, and seafoam turn nautical navy on its head. “[Colors], materials, and silhouettes hint at the beach, but overt tropes are nonexistent,” the designer says.

The entry encapsulates Anderson’s overall approach. A clamshell-shaped mirror and a curvy, rope-wrapped console offer texture and coastal flavor, offset by the unexpectedly traditional shade that tops a Kelly Wearstler lamp. The pale-blue pattern of the grasscloth wallcovering designed by Atlanta-based artist Sally King Benedict and Studio Four NYC, meanwhile, introduces whimsy along with the color story that Anderson subsequently weaves through the house.

Off the entry, a gracious doorway reveals the dining room, outfitted with a medley of oak, jute, rush, and glossy-white finishes that skews sexy. Here, iconic “How to Marry a Millionaire” chairs by Peter Dunham were the project’s jumping-off point and big splurge. Like the console around the corner, the rush chairs’ bold profiles belie their earthy materials. And, similar to the plain-white x-stools tucked under the console, the slipcovered head chairs from RH temper the tableau, not to mention the budget. As for color, the zingy aqua painting by Catherine Booker Jones that elicits visions of backyard swimming pools acts as the room’s blue element. “We’re slowly getting into art and love [the work Tharon picked],” the wife says.

From there, the dining room flows into the kitchen, adjacent to the living room where Anderson carved out a new breakfast nook. In this space, the designer again used art to add color, commissioning a sky-blue canvas from painter Ansley Givhan. As for the living room proper, the designer stuck to low-key furnishings, save for a pair of rattan stools she found at an antiques shop. The room’s centerpiece, an enormous leather ottoman, completes the look and announces that kids with sandy feet live here. “We open the doors in the morning, then we’re in and out all day,” the wife confirms. 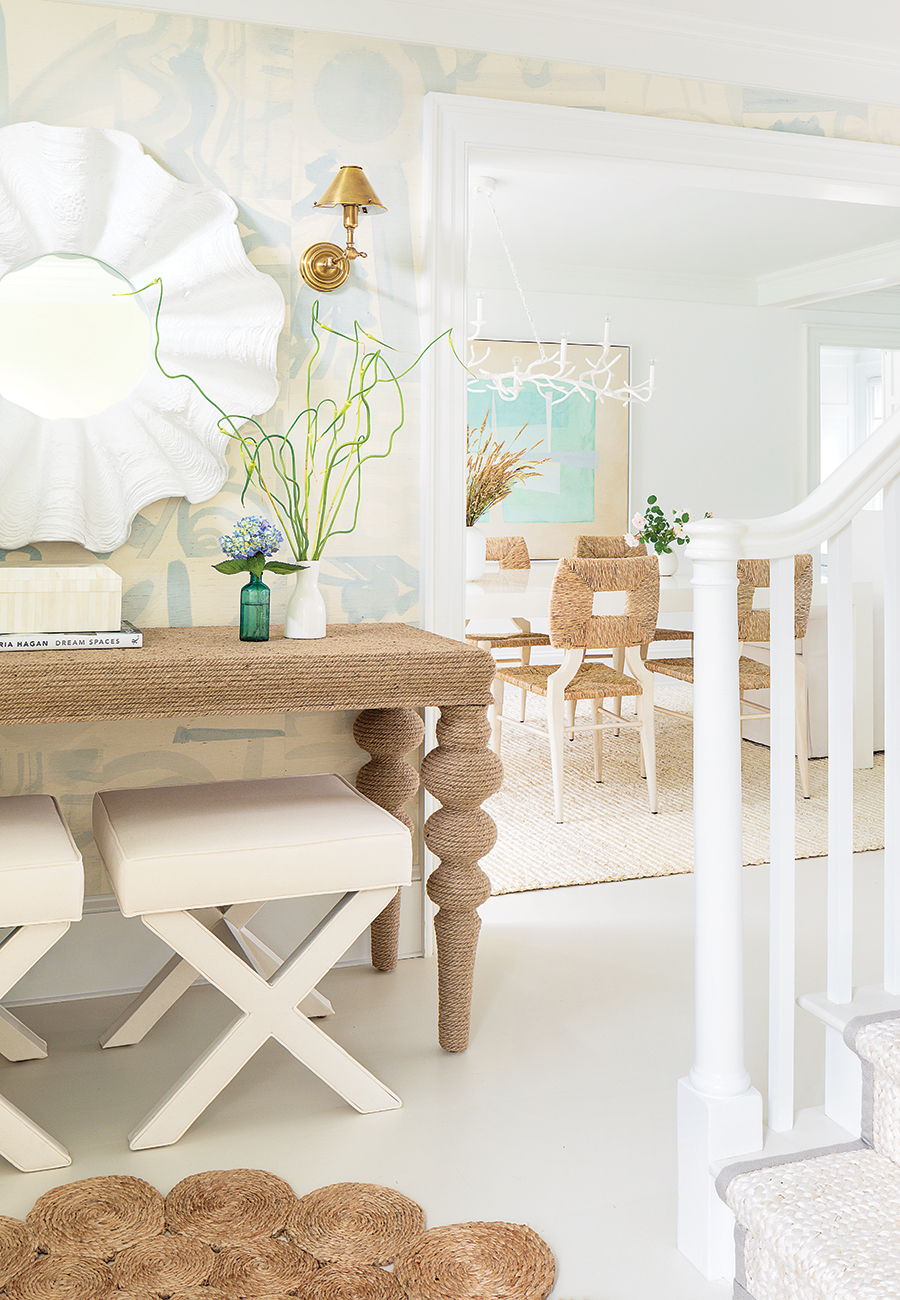 The designer employed a cohesive color-and-materials palette throughout the house, starting in the entry, to reinforce the airy flow in the home’s relatively open floor plan. / Photo by Read McKendree/JBSA 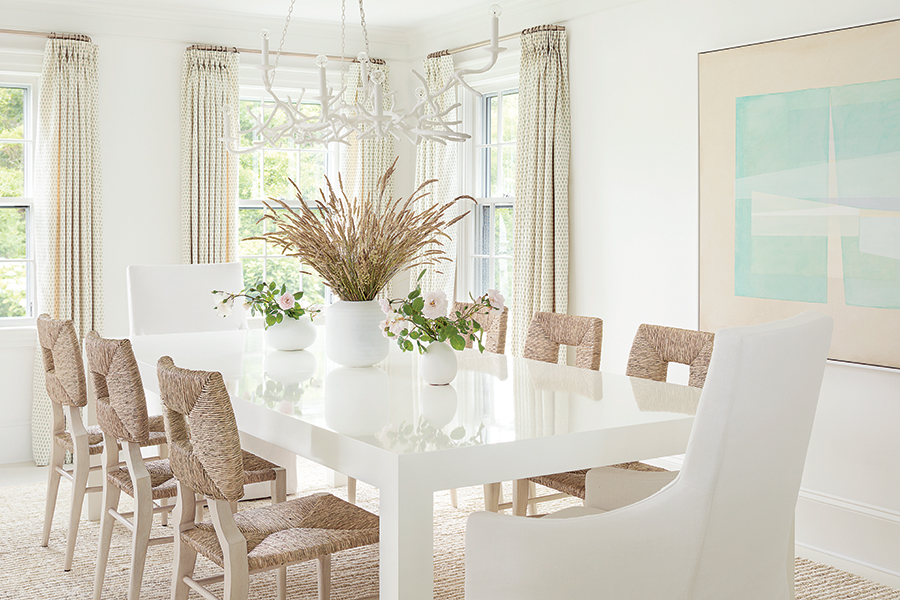 In the dining room, the chunky texture of the bleached-jute rug from Dash & Albert counters the glossy table, while Julie Neill plaster chandelier recalls the clamshell mirror in the entry. / Photo by Read McKendree/JBSA 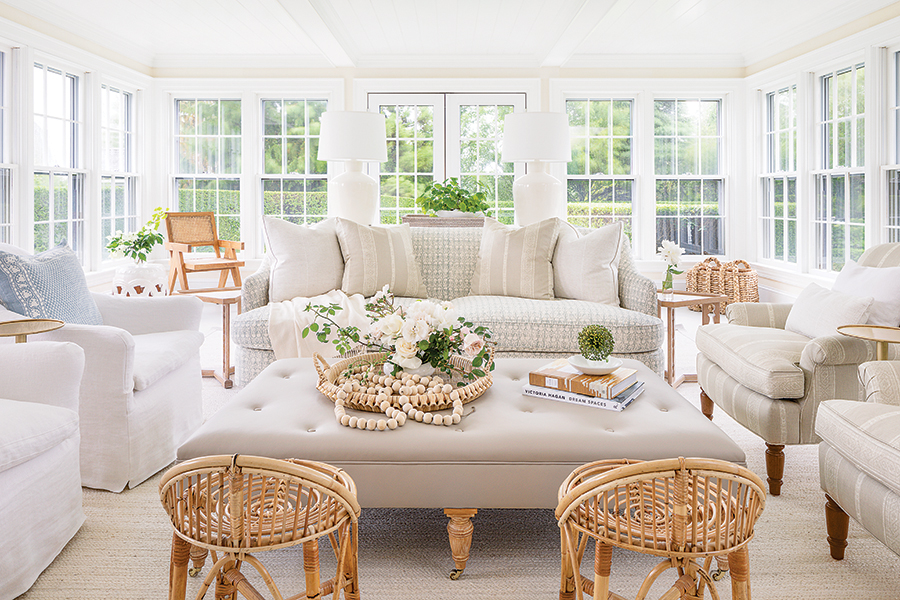 “There are grasscloth walls and natural finishes on the legs of upholstered pieces, but it’s really pretty simple,” Anderson says of the living room, which exudes a sunroom-like atmosphere thanks to three walls of windows. / Photo by Read McKendree/JBSA 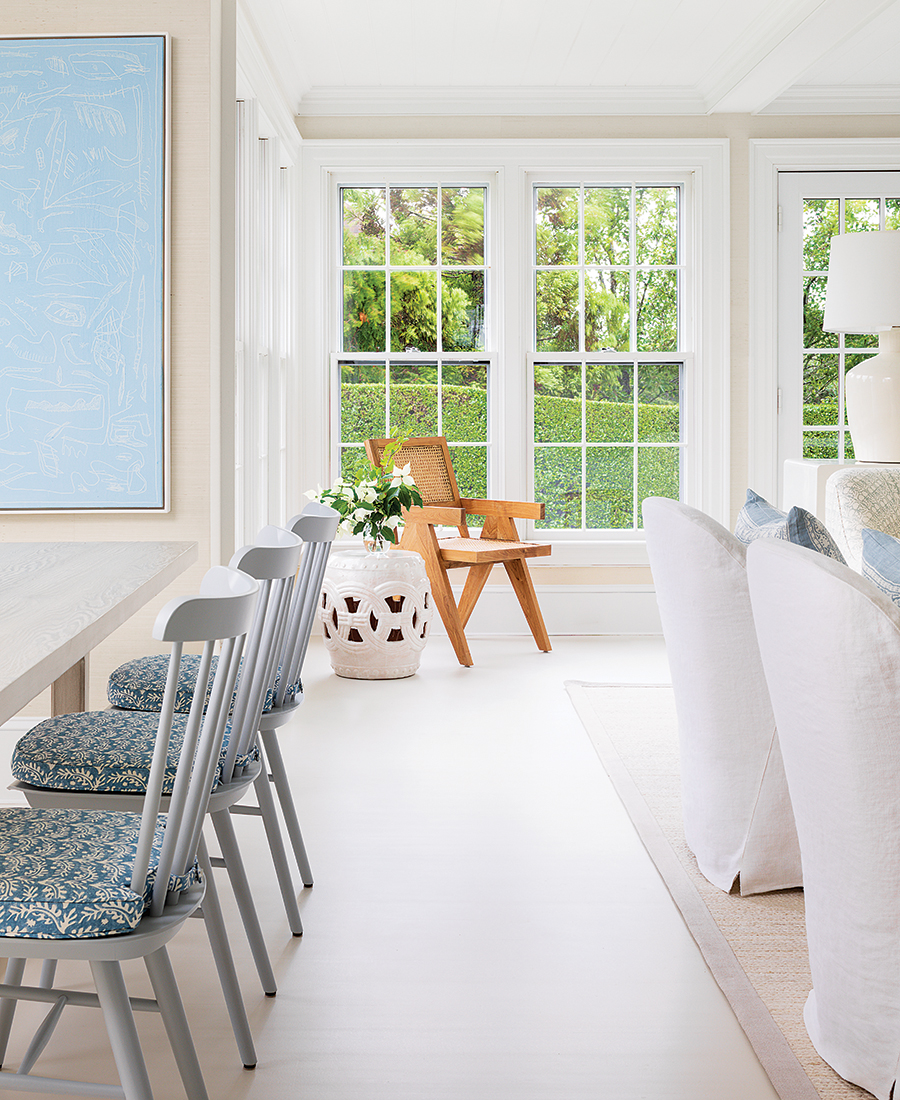 The breakfast nook’s gray Windsor chairs sport dusky-blue cushions, and the white floors are bare. Painted floors are very characteristic of historical homes on Nantucket, which the wife understood having grown up there, Anderson says. / Photo by Read McKendree/JBSA

Upstairs, the couple’s bedroom—done in whites, creamy ivory, and soft blues—is serene and, most important, free of the children’s toys. “This is where you leave all of that behind,” Anderson says. “I imagined [the owners] sitting on the deck with a bottle of rosé.”

In their daughter’s suite just down the hall, meanwhile, a botanical wallcovering gives way to a cozy rug and upholstery with cornflower-blue florals. “You can get really nautical really fast in Nantucket, so I loved the different floral prints together,” the wife says. Anderson’s inspiration for the sweet, feminine feel? The girly sleepovers the couple’s daughter enjoys with her cousin. 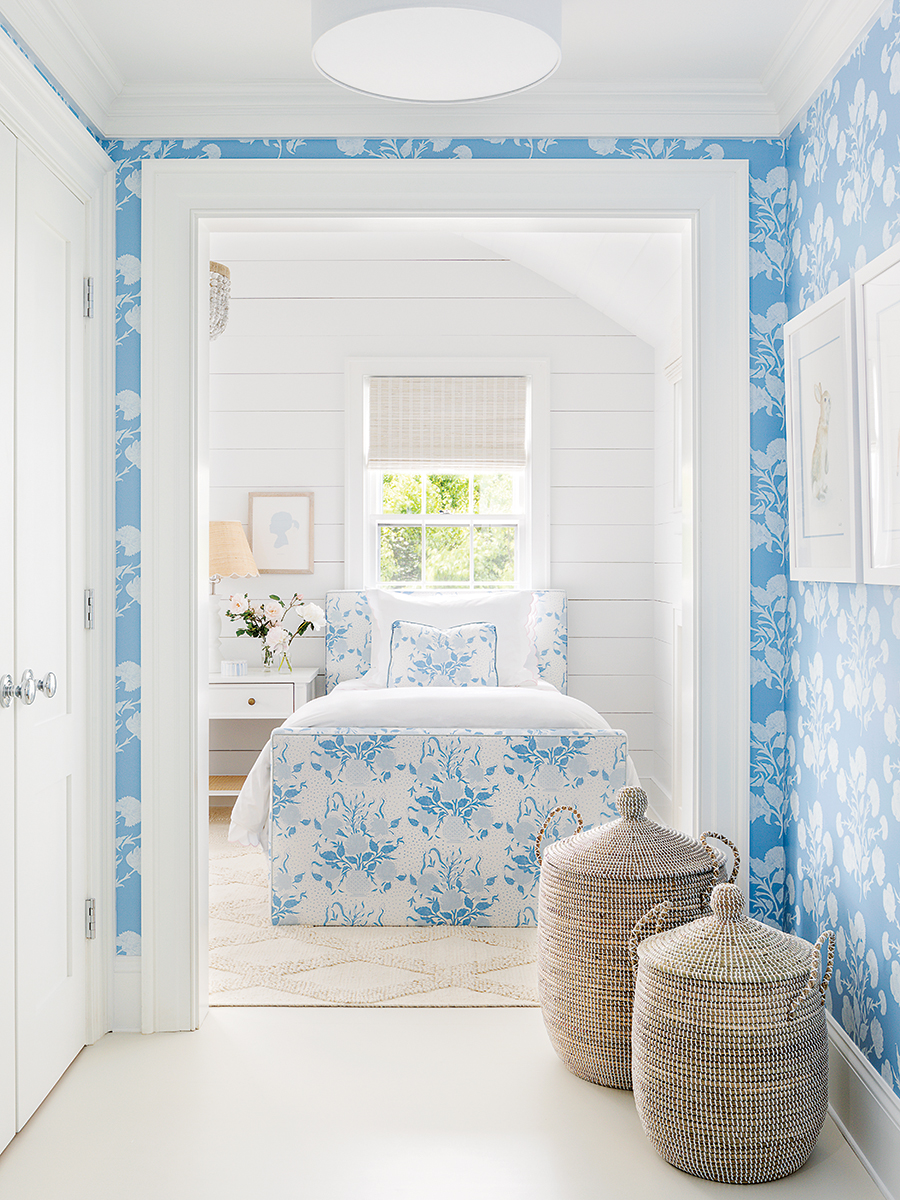 Lulie Wallace fabric and a wallcovering in similarly patterned florals lend a unifying vibe in the daughter’s bedroom without feeling matchy-matchy. “It’s cute and girly, and it will last for years,” Anderson says. 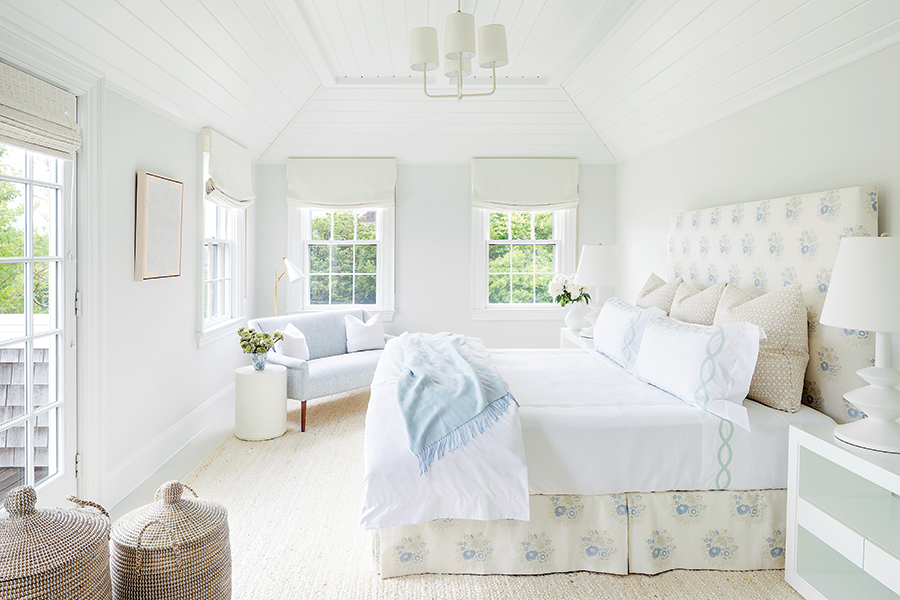 Anderson balanced fresh, understated décor with the primary bedroom’s traditional architectural elements such as the coffered, V-groove ceiling. The Giacometti-style lamps by RT Facts, on the other hand, offer crisp contrasts to the soft floral upholstery by Elizabeth Eakins. 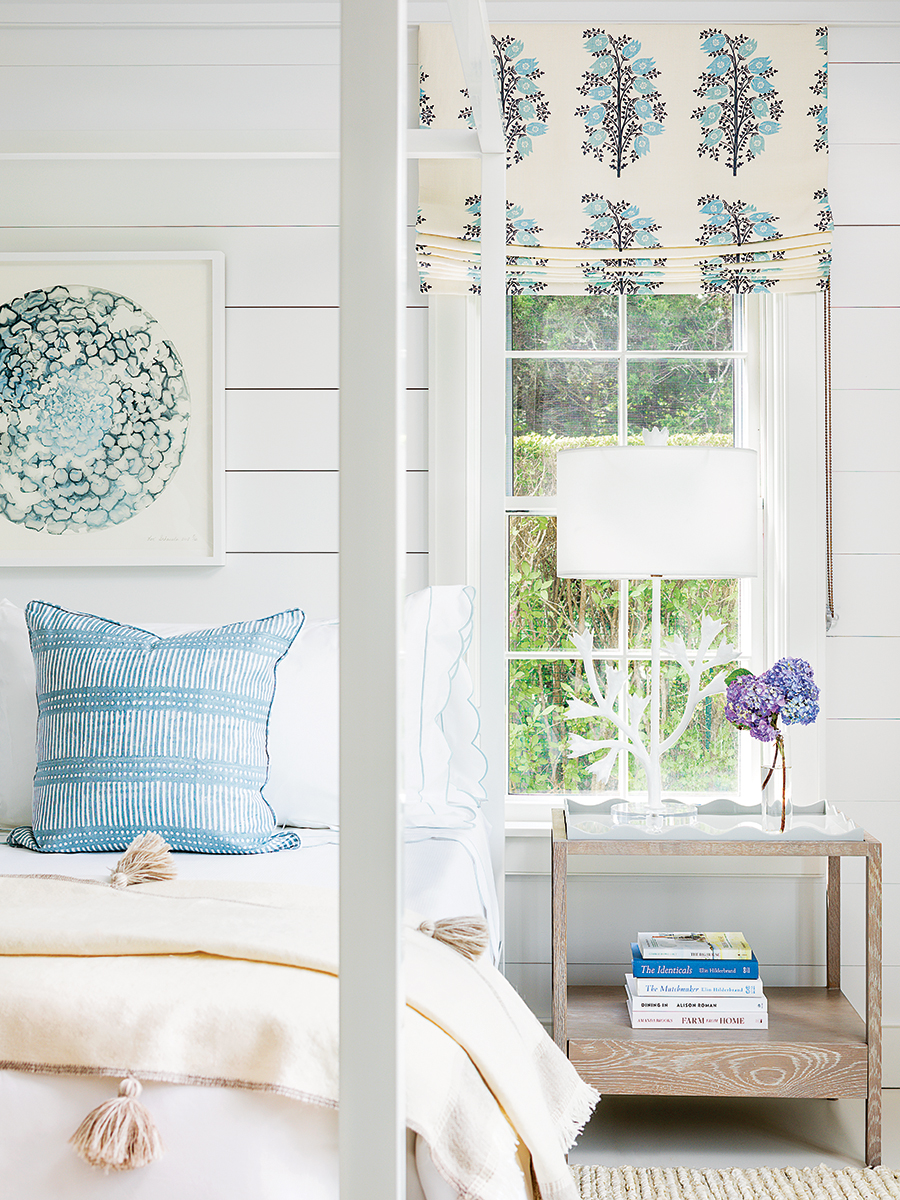 In a pool-house bedroom, Roman shades made from floral Quadrille fabric play off Cambridge-based artist Lori Schouela’s Blue Peony, which hangs above the bed and is formed from rose petals.

Aside from family time, summer routines tend toward morning beach trips—catching crabs is currently a favorite activity—and afternoons by the pool. The pool house, which doubles as a two-bedroom guest suite, offers respite from the sun and privacy for the family’s parade of visitors. “With the French doors open, it feels like you’re outside,” Anderson says. For décor, she followed the same luxe but unfussy principles she applied in the main house, incorporating an abaca rug, a rattan Serena & Lily daybed, and a seascape by local photographer Lauren Marttila.

At the end of the day, the finished space is a happy home for young kids with wet bathing suits and sticky hands—though based on the design, you’d never really know it. “It’s about making curated, thoughtful decisions,” Anderson says. “Our approach went a really long way.” 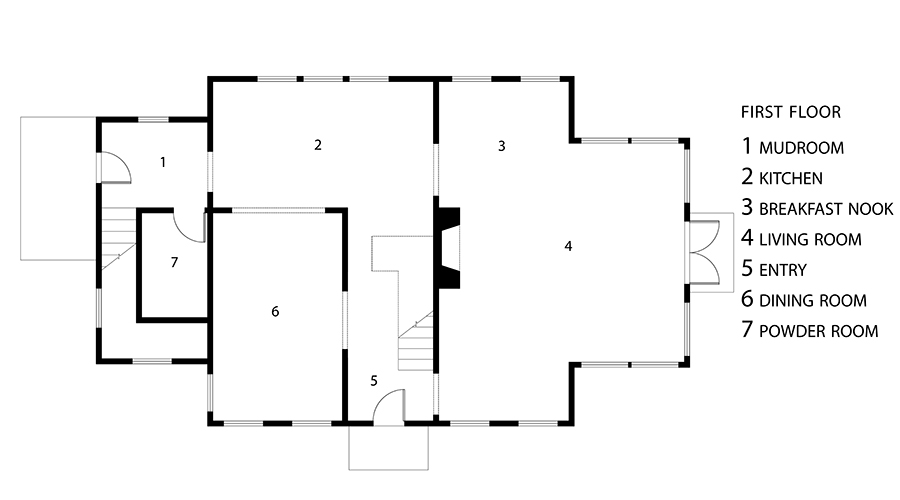