This Lynnfield Couple Balanced Edgy and Traditional in Their 1980s Tudor 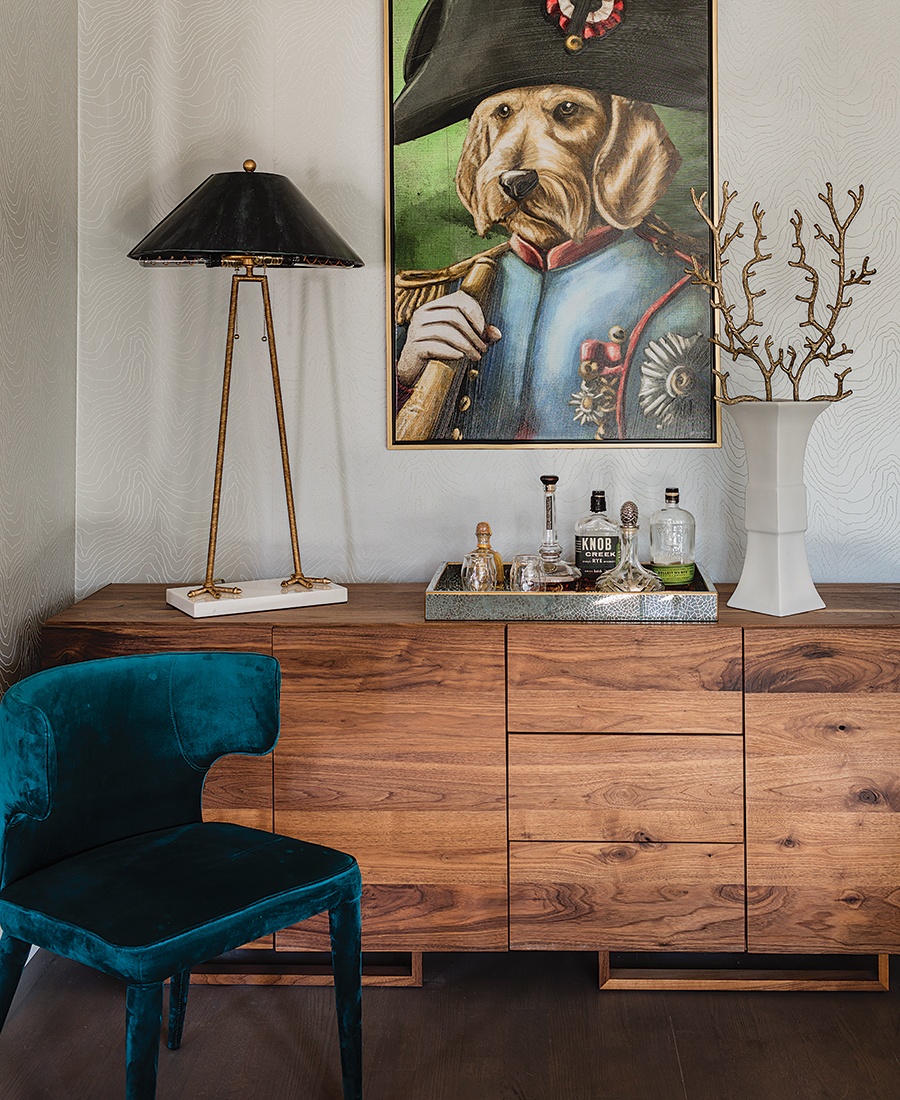 In early 2018, around the time she was redecorating her Lynnfield house, homeowner Lindsay Weiss’s phone buzzed with a message from her aunt: A 6,000-square-foot 1980s Tudor on the other side of town had just hit the market, and she thought it would be perfect for Lindsay’s family of four. Wasting no time, Lindsay—who had been searching for a larger residence to accommodate their storage needs—toured the space with her husband, Mike. From the exterior, it “looked like a castle,” Lindsay says. The interior, however, felt far less like a fairytale due to the outdated wallcoverings, unflattering paint colors, and dark wood. “It needed a complete and utter renovation,” she says. Even so, the open-concept layout was “exactly what I was looking for,” Lindsay adds.

Although Mike wasn’t itching to relocate, he quickly saw the potential and jumped onboard. But he had one stipulation. “I [said], ‘If we’re going to do this, we’re going to [make the house] really cool,’” he says.

So Lindsay and Mike called interior designer Ana Donohue, who was helping them refurnish their old pad, to tell her about their change in plans. Fortunately, the designer was up for the challenge. “I love working with them. They want to do things that are interesting and different,” Donohue says. “[Plus], they’re a guaranteed good time.”

A must-have for the couple? Spaces to bond with their nine-year-old twin daughters. “When we’re all home, we like to be together,” Mike says. With that in mind, Donohue set out to rid the house of its 1980s aesthetic by creating family-friendly spaces that accomplished the couple’s storage goals, while combining Mike’s edgy tastes with Lindsay’s traditional style. And to ensure that the house felt cohesive, Donohue would rely on plush fabrics, metallic fixtures, and a few pops of color throughout.

At the heart of the renovation was the outdated kitchen, which sat on a raised platform. What was “probably cutting-edge at the time had run its course,” Donohue says. So, contractors at 2M Construction gutted the room and widened the doorway to the adjacent dining room—one of the project’s only major structural changes—to improve the flow. Now, two islands wrapped in Calacatta marble provide Lindsay, who’s an avid cook, with ample prep space and Mike with a spot to wrap up work without missing out on snack time with the girls. 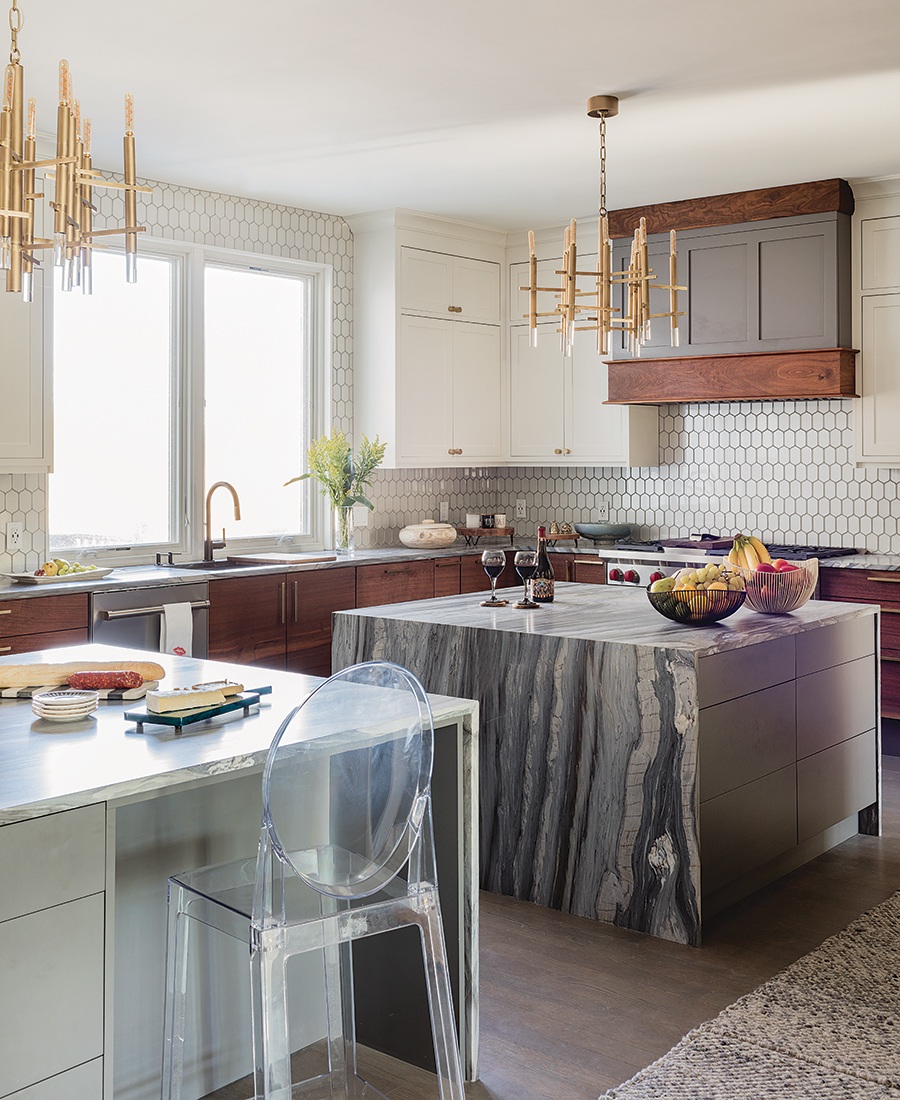 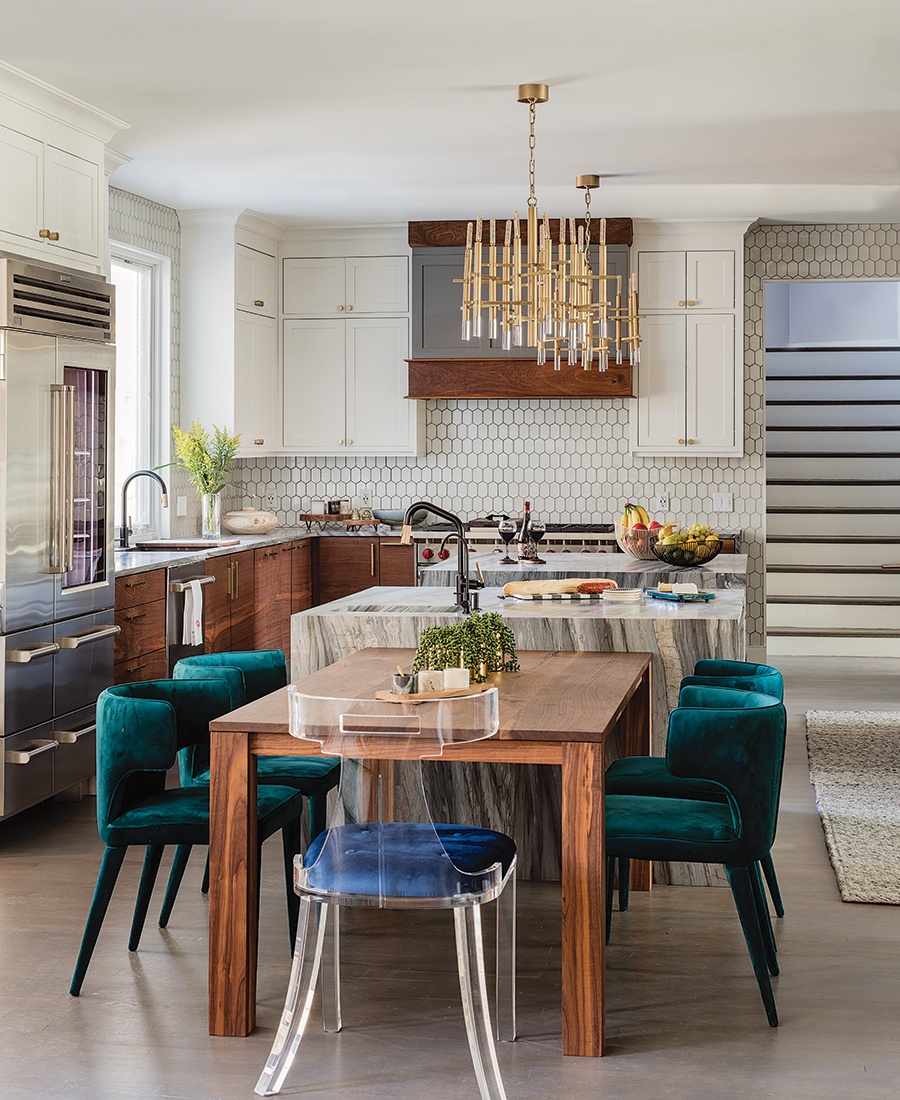 A medley of chairs, including an acrylic-and-velvet number at the head of the table, brings personality to the kitchen. / Photo by Michael J. Lee 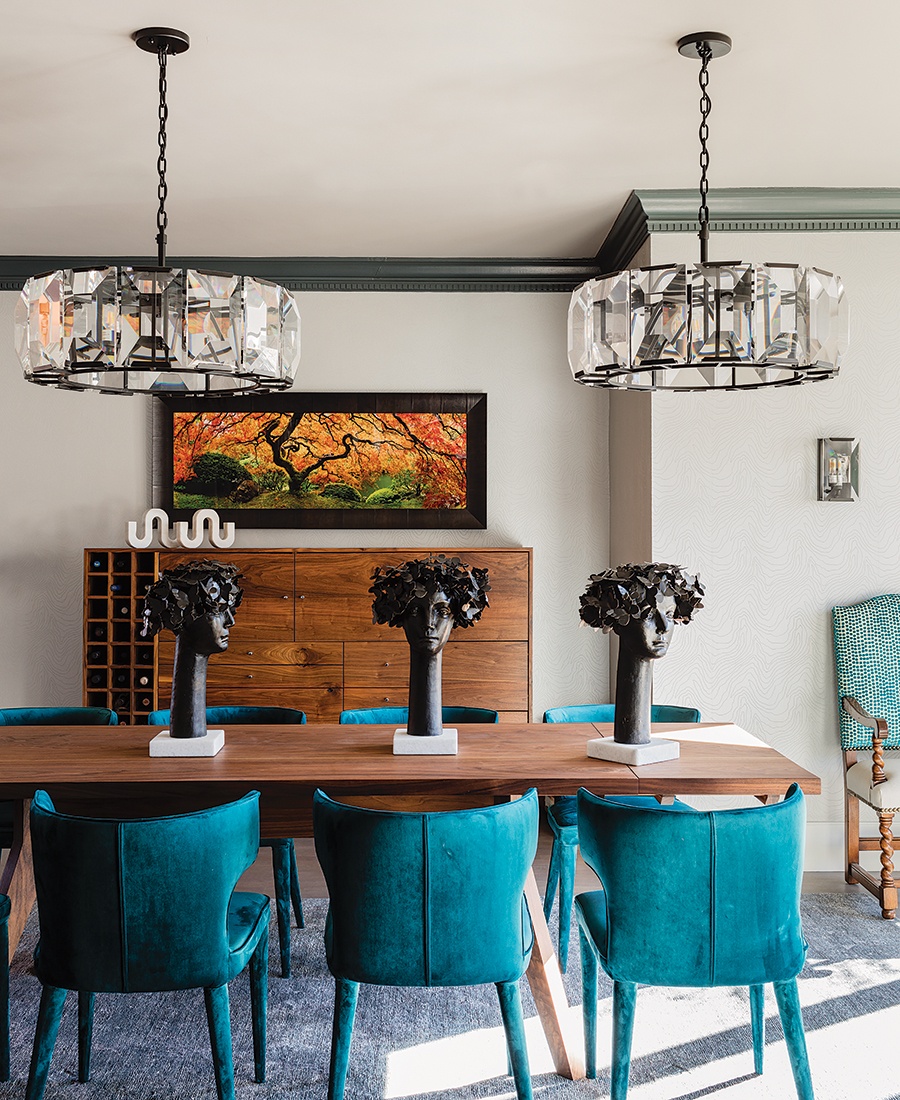 Velvet chairs surrounding the custom walnut table, also crafted by Wheeler, add a fun pop of color to the dining room. “I approach dining rooms the way I approach powder rooms: They can be a little offset,” Ana Donohue says. “They don’t have to be conservative because you’re not eating there every day.” / Photo by Michael J. Lee

From there, the kitchen opens to the great room—a grand yet cozy spot for everyday hangs and movie nights. Donohue freshened up the towering walls, which climb more than 20 feet, with Benjamin Moore’s “Chantilly Lace” and reclad the fireplace surround in stark-white stone tiles. Preventing the room from feeling sterile, the gorgeous navy hue of the velvet-and-metallic armchairs and the vibrant pop art, found at a Parisian flea market, further the color connection to the surrounding areas. And for a touch of whimsy, Donohue gifted the Weiss family two beetle sculptures, displayed on opposite sides of the space. “They’re probably the only clients I would give a bug to,” Donohue says with a laugh.

Across the way in the music room, Donohue took a more experimental approach. She paired Lindsay’s childhood Steinway piano with an unexpected wooden chair shaped like a hand and blended curved ottomans with angular coffee tables. To dress up the side wall, the couple hung the guitar that Lindsay’s late father played. Every so often, one of their daughters will take the instrument down and practice strumming some tunes. “It’s our way of remembering him,” Mike says. “There’s a lot of meaning in this room.” 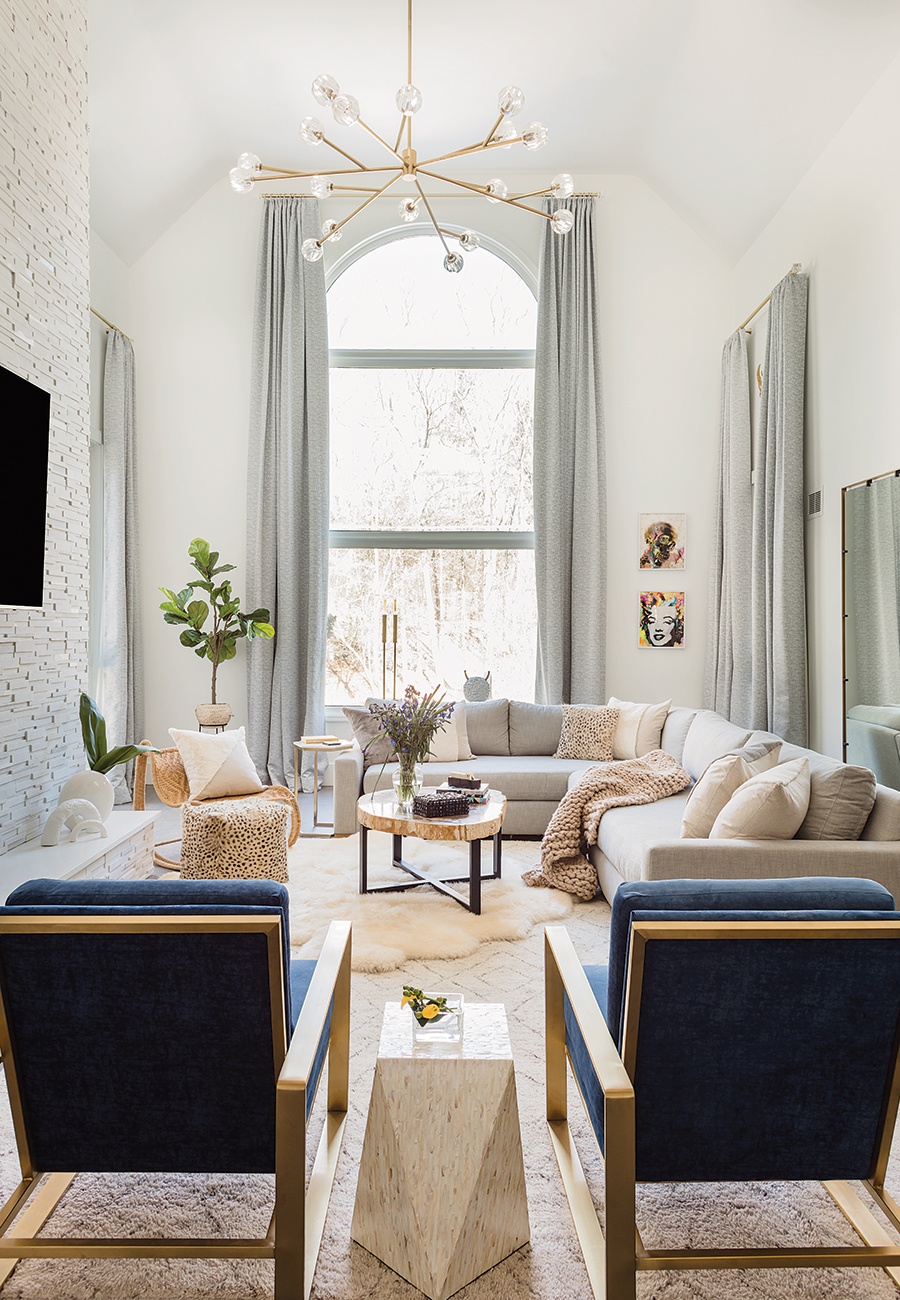 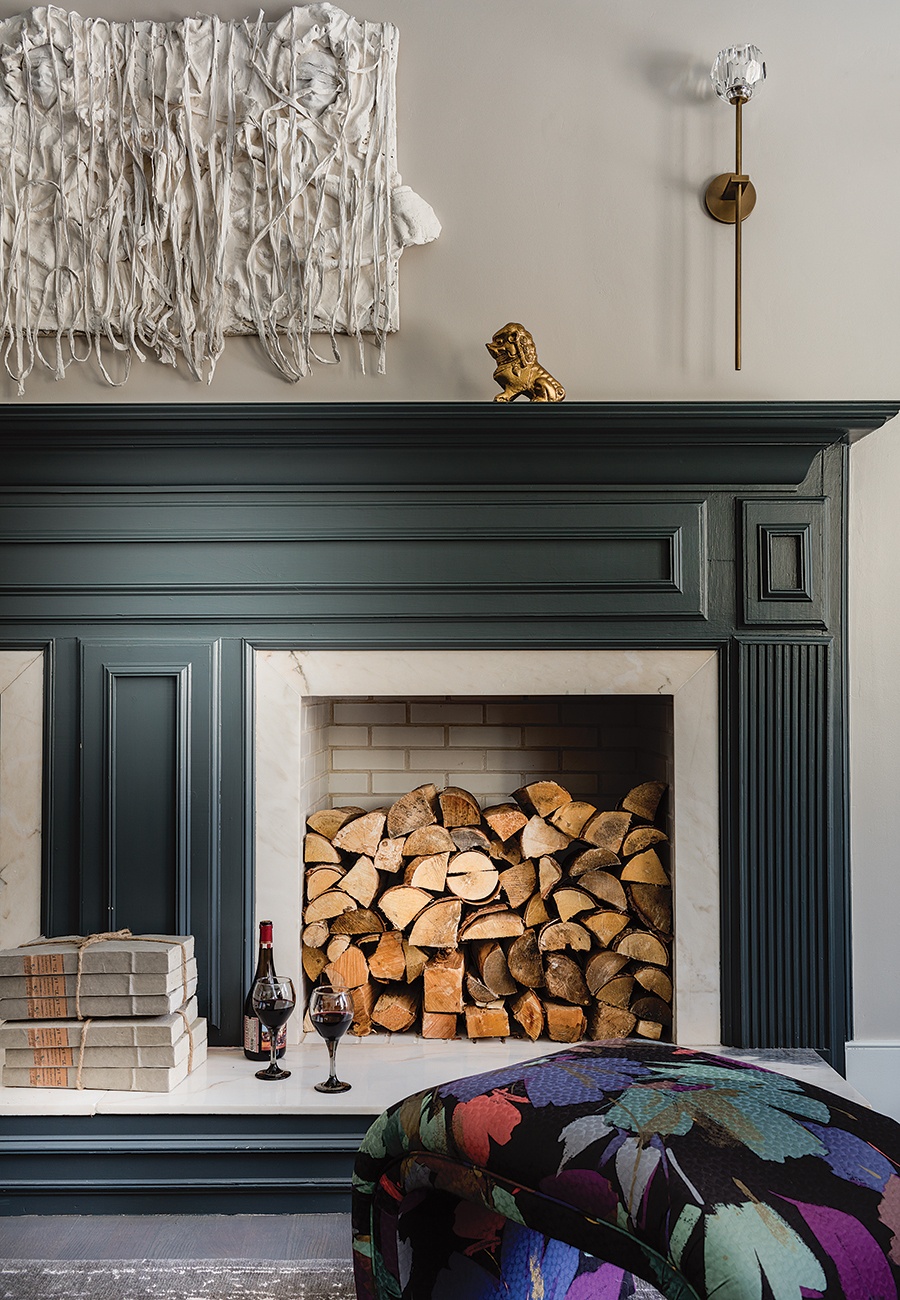 A few coats of Benjamin Moore’s ‘Washington Blue” liven up the asymmetrical fireplace in the music room. Above it, a mixed-media sculpture—part of Caruso’s Unaware series—pays honor to Trayvon Martin. / Photo by Michael J. Lee 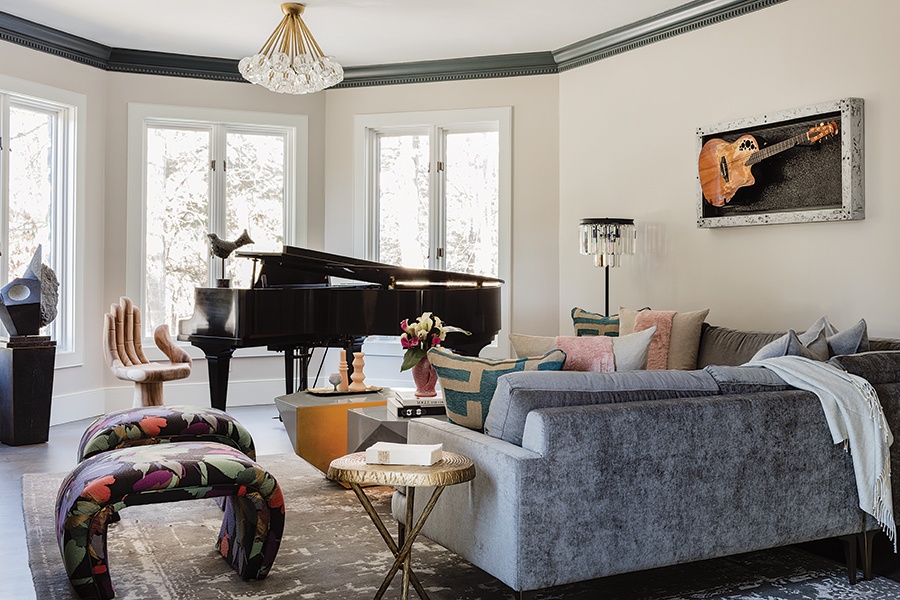 Donohue outfitted the music room with a mix of personal items and quirky furnishings, such as the Noir hand chair placed behind the self-playing piano. “I like the idea of taking something so beautiful and classic and [pairing it with] the unexpected seat,” the designer says. “When you walk in, it immediately [speaks] to the homeowners.” / Photo by Michael J. Lee

The transformation continues upstairs in the primary suite, where Donohue removed another raised platform. She then gave the bedroom a dose of “rock ’n’ roll meets New England” by painting the walls a moody gray and adding golden accents. The shapely Stilnovo light fixtures above the tufted bedframe and plush sofa, for example, take the scheme “over the top,” the designer says.

While Mom and Dad have a private place to unwind, the twins have spaces of their own, too. The side staircase off the kitchen leads to a girly playroom and a dreamy bunkroom for sleepovers and out-of-town guests. Fabricated by Modern Design Construction, the bunk’s frame supports two king-size beds on the bottom and a pair of queens on top. Playing off the cloud motif of the room’s Sanderson wallcovering, Donohue selected ruched comforters and a star-shaped light. “We have this vision that we’re going to be the cool parents and all the kids will want to stay over our house,” Mike says.

And when that vision becomes a reality and they’re hosting slumber parties every weekend, their house will be equipped to handle the inevitable mess. “Every inch of our house is useable. There’s no room where we say, ‘Let’s not get that dirty,’” Mike says. “The kids are dragging mud into every single room every day, and we embrace it.” Donohue is equally as pleased with the results. “I feel like this home really represents them,” she says. “That’s what makes me happy.” 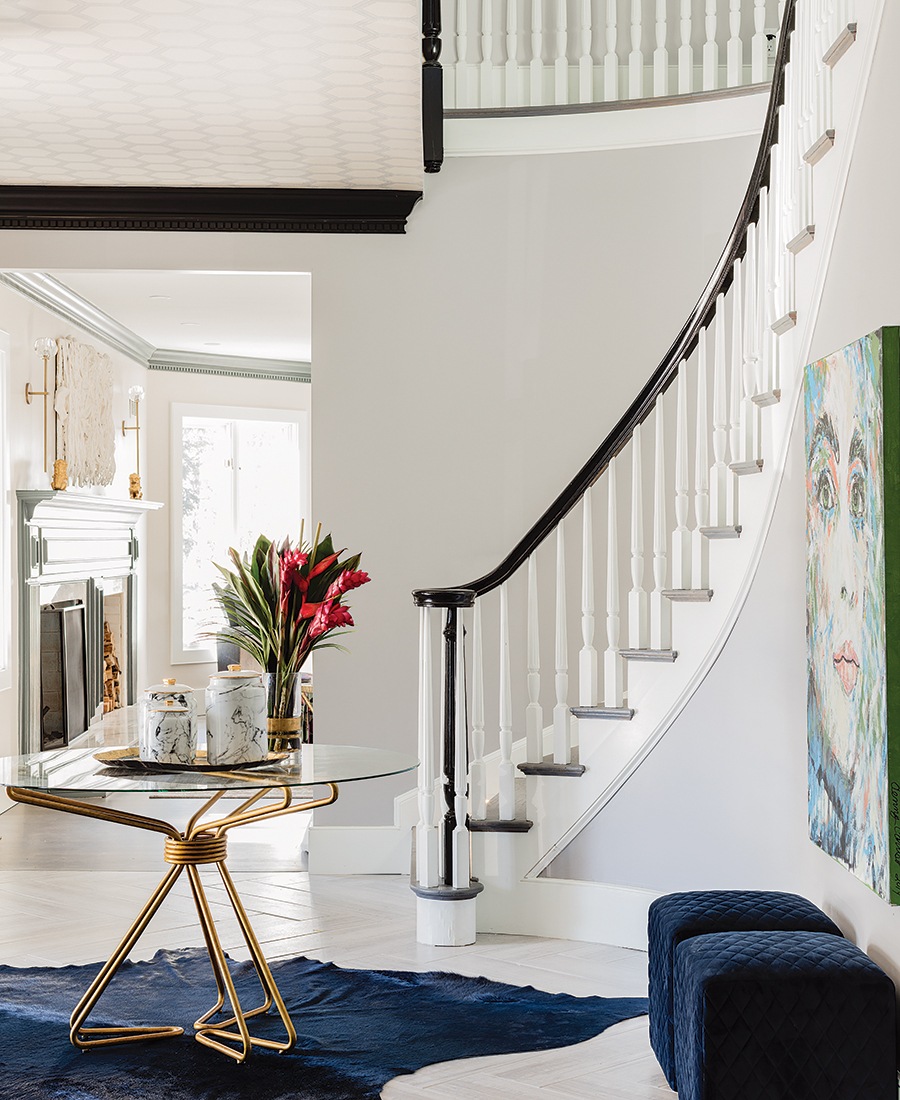 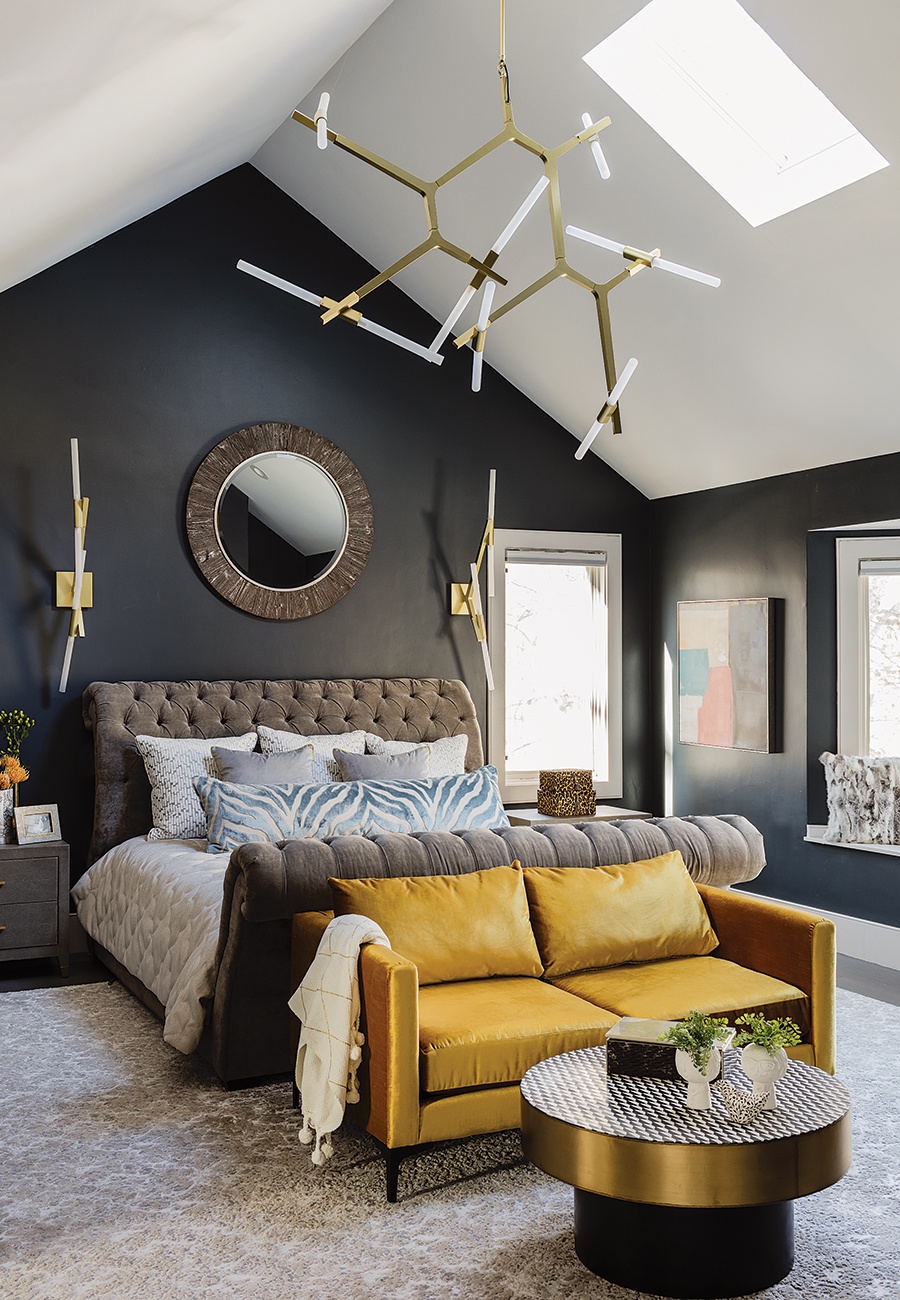 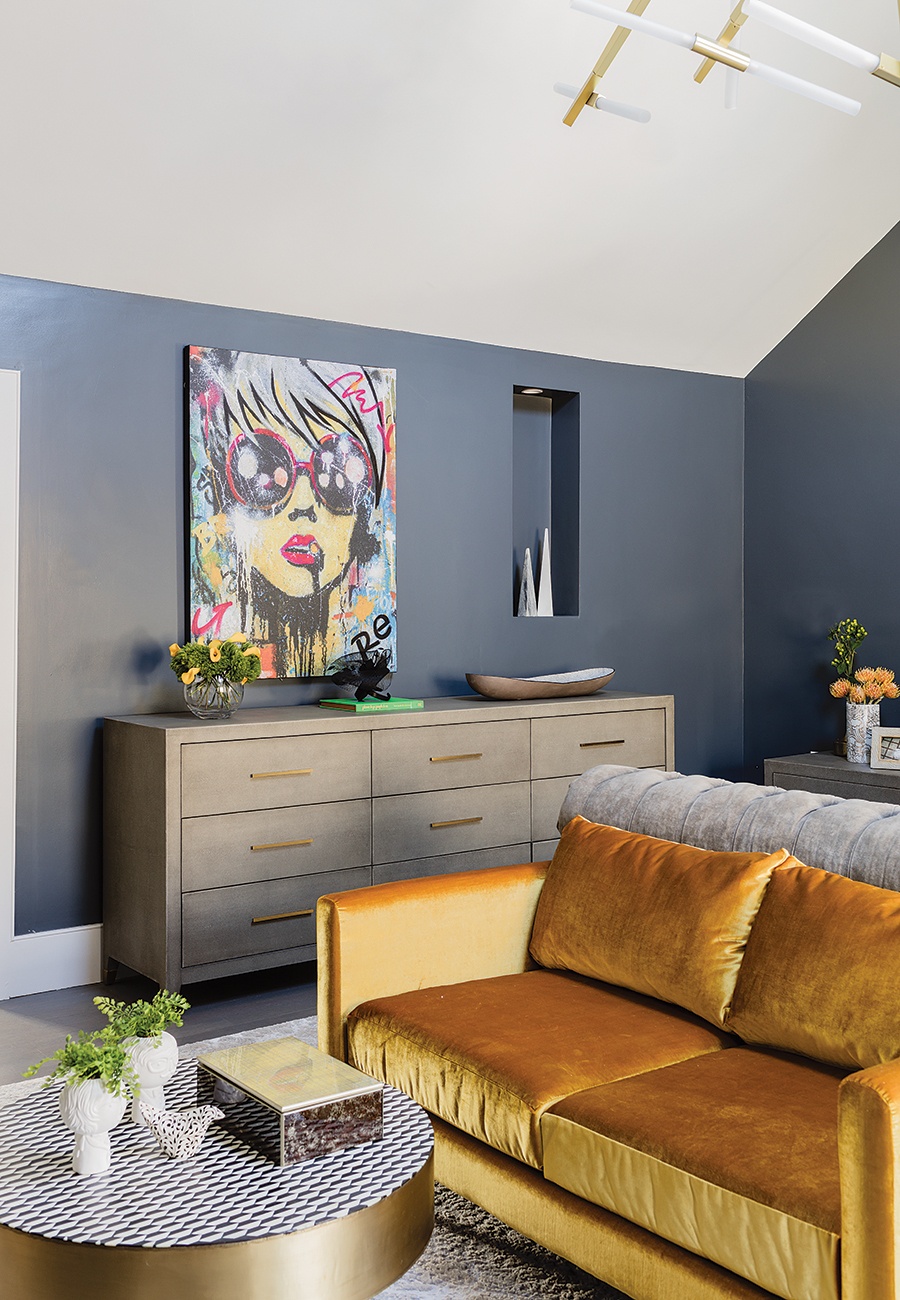 A sitting area in the couple’s bedroom features a velvet sofa and a brass-and-iron coffee table. / Photo by Michael J. Lee 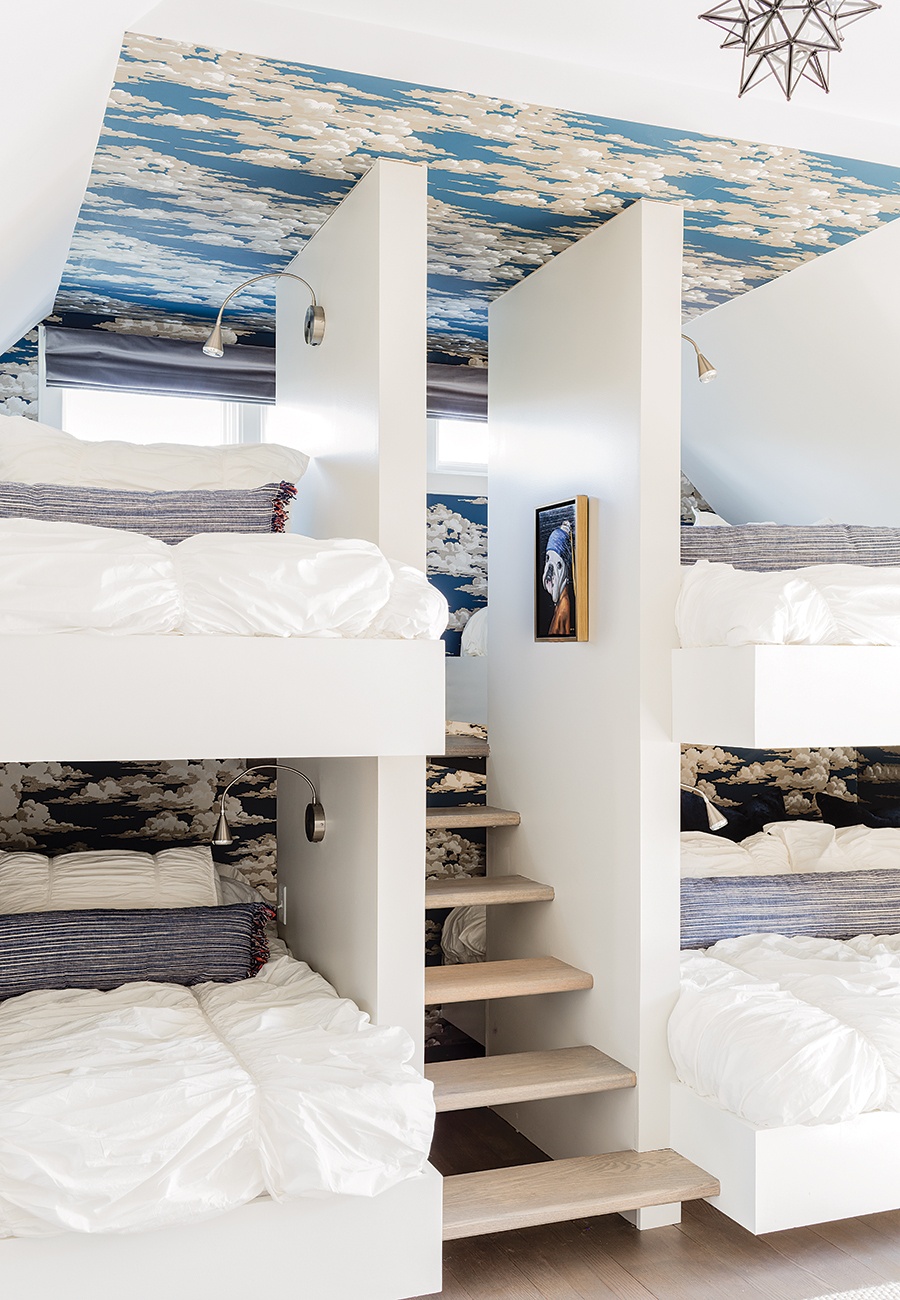 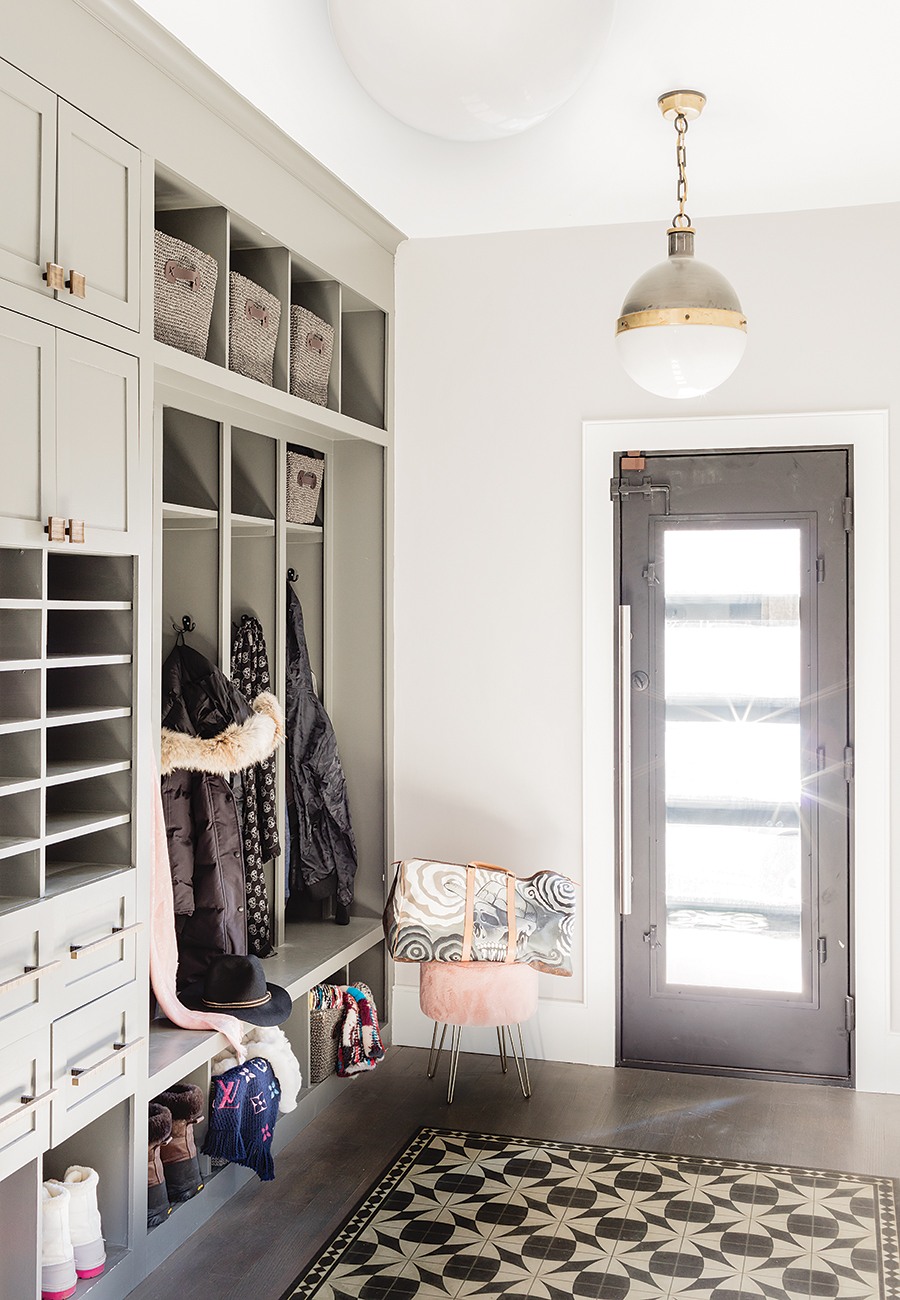 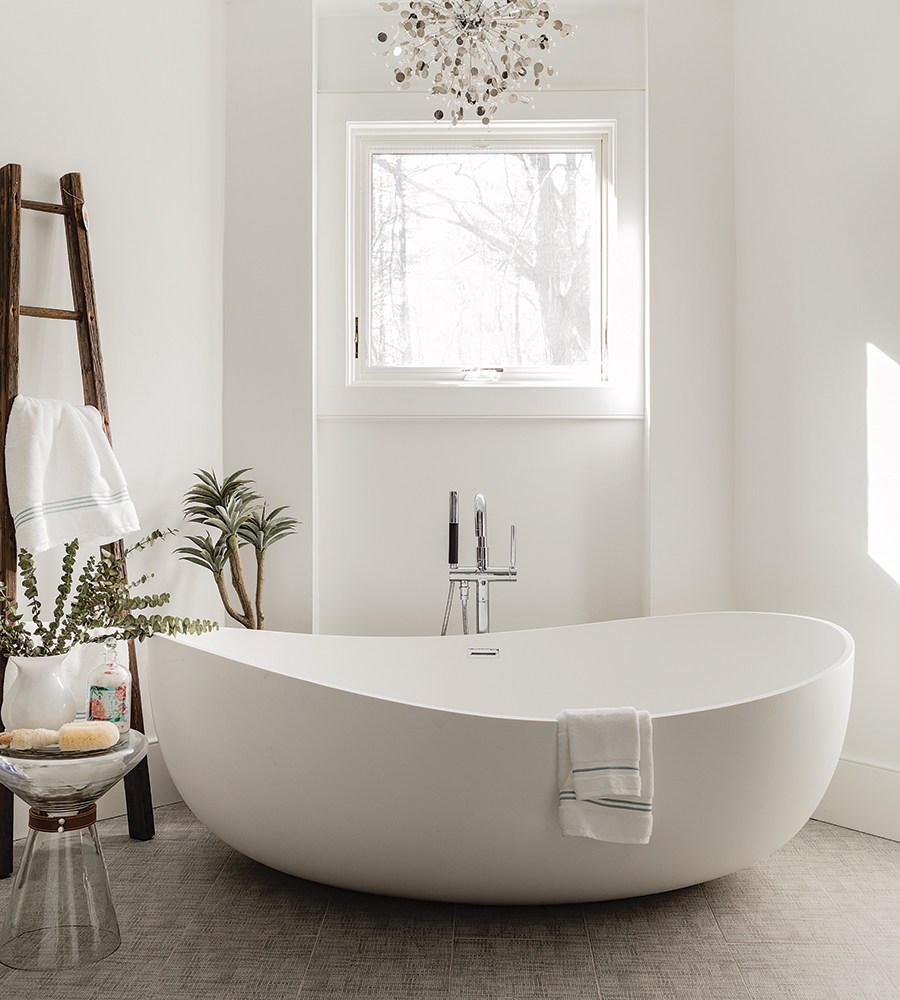 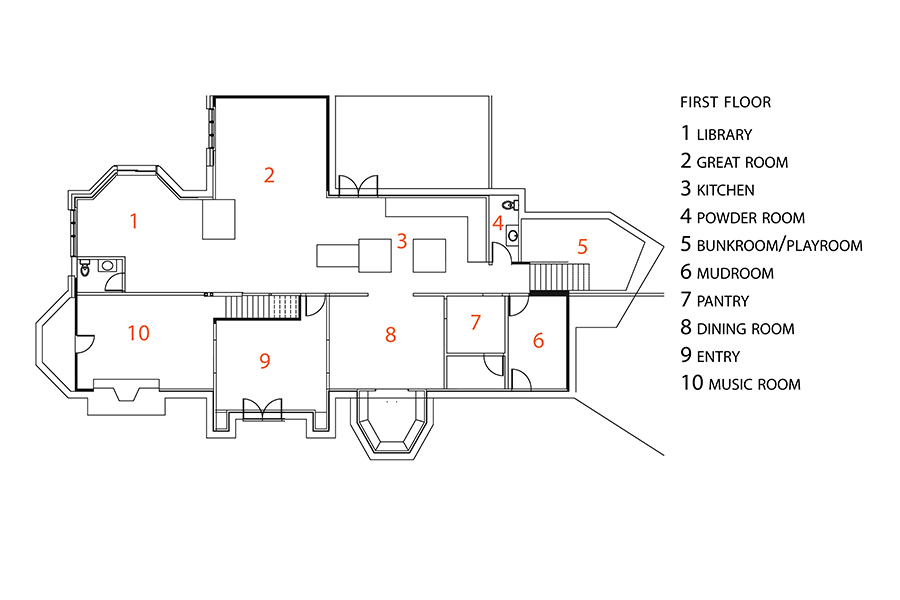